Yesterday we got blown off the Strathfarrar Four, which on an expedition to finish off shortened walks was a bit of a blow to the morale. viewtopic.php?f=9&t=72027
~So today we came back with the car to do the western two of the Four. The forecast was for the wind to moderate and be insignificant in the afternoon and after some humming and hawing about the route decided to leave the bikes at the end and go anti-clockwise.
Following a good cooked breakfast we were nice and prompt at the gate at 9am leaving us ten hours to faff about and do our walk. Rudolph dropped me at the start where I sat in the shelter of someone else's car doing my knitting while he took the bikes to the other end and came back in the car. I chatted to a few folk who came and went; some who were doing the same as us having turned back the previous day and some who had turned back off other mountains as well. This made me feel loads better.

strathfarrar western.gpx Open full screen  NB: Walkhighlands is not responsible for the accuracy of gpx files in users posts
We set off up the path we had come down the day before, aiming for the south ridge of Sgurr a'Choire Ghlas. We followed a quad bike track up towards the bealach with Meall a' Gheur-Fheadain then went straight up the steep grassy slope to reach the ridge - brutal but it got us up! back down the glen from where we started climbing steeply it was very steep, so I had to stop for a rest and to take a photograph of this nice mossy turd

It was lovely up there and we stopped once we got onto the ridge for a brew and a snack. At last it was time for the happy mugs to make an appearance. on the ridge at last, looking over to the Mullardoch munros. This is why we come 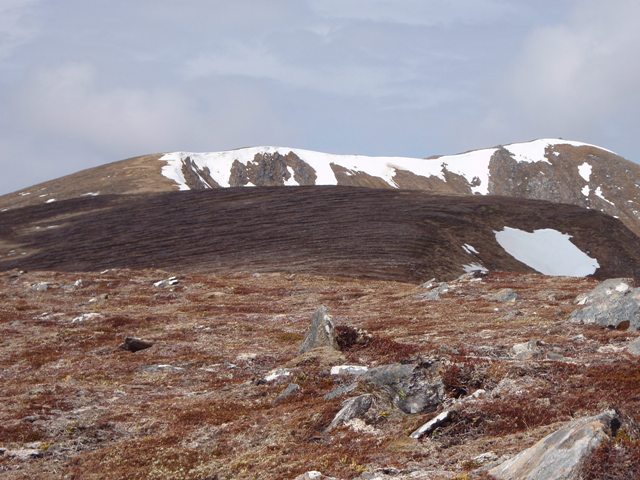 looking up the ridge to the top, with interesting weather-scoured terraces the happy mugs put in an appearance

It was still a decent trog up to the summit of the first Munro of the day, but what a difference a day makes. It was warm, pleasant and worry-free! still a way to go, but this ridge is highly recommended, and coming up this way completely made up for the disappointment of turning back yesterday some interesting lichen/fungus on the ridge

The top of Sgurr a'Choire Ghlas has two large cairns and a trig point. We went to all of them but could not decide which was the summit. We met two gents on the top who were doing the same as us in the opposite direction; I'd spoken to them at the bottom and they had also got blown off yesterday. looking towards Carn nan Gobhar from the top There are some lovely cliffs (not so lovely when it's windy but lovely today) with hazy views into Glen Orrin but we could not see very far or make out distant mountains because of the haze. However it was a beautiful ridge up to the intermediate top of Creag Gorm a'Bhealaich and then Sgurr Fhuar-Thuill and this was a pleasant hour and a half. Rudolph on top with Sgurr na Muice and the loch behind And me, I even got to take my coat off!

We didn't bother with the top of Sgurr na Fearstaig although it was only an extra 30m climb but took the lovely stalkers path which winds round the corrie below some cornices which were melting quickly, and then following the burn all the way down past the beautiful sparkly Loch Toll a'Mhuic. We had a second brew and lunch at about the 750m mark and could have sat in the sun for ages but were conscious of the time and had to keep going. The path turns into a track lower down and we were back at the bikes ready to cycle back to the car at the start point, against the wind but a pleasant journey past our previous campsite. this is a really good path down, nice gradient, easy to follow looking back up the way we came, As we reached the car, we were overtaken by two gentlemen whom we had chatted to at breakfast. They set off after us and did all four munros, but that did not dampen our happiness to have finished the job, and we got back to the gate at ten to seven - made it!
I asked the lady at the gate what would happen if we were late - she replied she would get to shout at us! Fair enough I thought.

Good to see the happy mugs out at least, even if only by the third installment...

Alteknacker wrote:Good to see the happy mugs out at least, even if only by the third installment...

hm yes I am not sure what happened to them in part 1, but it was just too windy for a brew in part two.