Heading off after tea time on the Friday, I thought that I would fill the car up with petrol at Aviemore. However, I arrived in Aviemore to find that the filling station had been removed. This left me a little anxious about running out of gas. I took a slight detour to Dalwhinnie but the filling station closed at six o'clock. The problem with looking for petrol is that you can use so much trying to find it.

I knew that I had enough to take me to Glen Lyon, but it is a long glen and I did not want to run out of petrol in such a remote location.

The last time I was in a remote area and low on fuel was on the north coast and I found that the petrol pump in Durness had an unmanned card system like at many supermarket pumps but sadly such technology has yet to reach Dalwhinnie. It seems prudent to fill the car up before heading off into the hills, or possibly, even the day before.

Resigned to the fact that I was unlikely to find petrol without heading for Pitlochry, I headed for Trinafour, parking up at the end of the track to the bothy that was going to be my base for the weekend. Cycling out to the bothy, I ate my supper and 'hit the sack'. I had 10kg of coal but decided to leave it in the car and take it in to the bothy the next day on my return. The bothy was cold, but I have a good sleeping bag. I did wake up during the night and looking through the window, I could see the two-thirds waxing moon reflecting in the loch. Up at the crack of dawn (~0530), I had coffee and porridge before heading off to the car on my bike. I made a slight detour to Kinloch Rannoch where there is a small garage with a single unleaded pump and a single (red?) diesel pump, but at 0730, it was shut. The low fuel indicator light was still not showing, so I took my chances and continued to the head of Glen Lyon. On the way down, I did a bit of reconnaissance, trying to find the start of the next day's route and suitable parking at Camusvrachan.

On arrival at the dam, I was surprised to see so many people, Portaloos and event flags. It was the day of the Glen Lyon Ultra, a 31 mile race. Maybe next year?! A few minutes after the 0930 start, I was off on my own, perhaps more modest, challenge.

There was a path that has been lost due to a landslide. This would have been a bit of a short cut and avoided a bit of extra ascent and descent. I'm not sure that a path has been re-worn but the slopes should have stabilised. However, I headed up to the track, stopping to take a photograph of the dam on reaching the track. I chatted to a man on a mountain bike for a while. He has climbed all the Munros and Corbetts and was heading for the Munro Beinn Mhanach, which is usually approached from Glen Orchy. This seems like a good alternative approach if using a bike.

Beinn Monach is the central peak seen when looking down Loch Lyon.

he route continues above Loch Lyon and turns right up to a locked forestry gate, just before the bridge seen below. The bridge crosses the first major burn since leaving the dam and acts as a navigational marker. 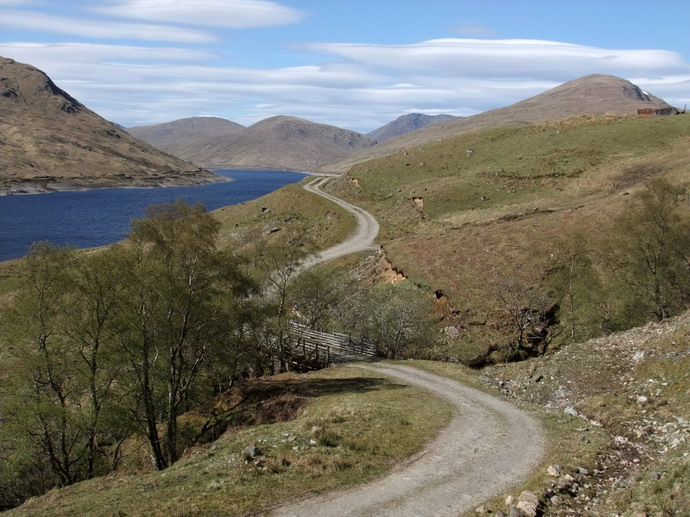 The track starts of being clear, gradually becoming grassy and then disappearing altogether. The route continues through recently planted forest. This means that access by this route may become difficult in the future. It looked as though, for each tree, a mass of earth had been cut out and left as a raised spot in which the trees were planted. That is, there was always a hole next to a mound with a tree planted. I am not sure if this is always how it is done. It seems to me that in previous decades, the land was furrowed and young trees planted on the ridges. This led to the less naturally looking rows of conifers that were common. These days planting seems more random and possibly including some different species to improve the richness of the habitat in terms of the range of ecological niches. This man, James certainly seems to know how to plant trees!

The route ahead was clear. heading for the central dome seen here. It was dry and firm underfoot without deep heather so progress was relatively easy for pathless terrain.

Looking back across Loch Lyon towards Beinn Heasgarnich and Creag Mhor. 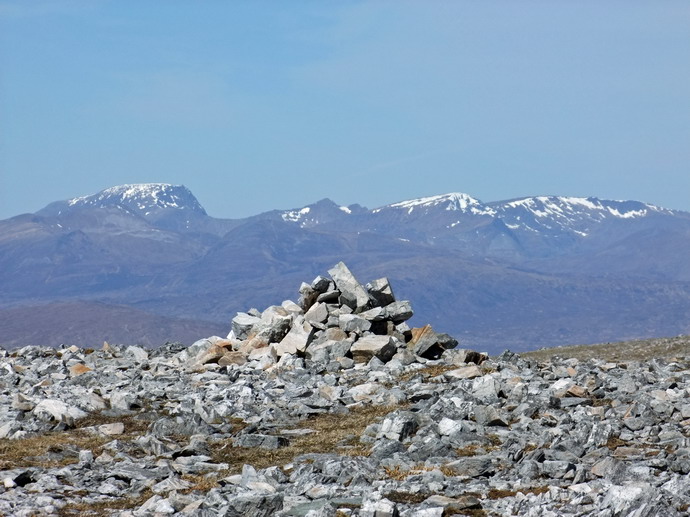 On the summit of Meall Buidhe. The hill to the left of the cairn must be Beinn a' Chreachain. The Black Mount and Buachaille Etive Mor seen to the right. Looking towards Stuchd an Lochain with Meall Garbh, An Stuc and Ben Lawers beyond.

Heading down Creag a' Chaorainn, a bird flew up and startled me. I suspected that I had disturbed it from it's nest as I was so close when it flew away. Sure enough....Golden Plover nest. Many years ago, I nearly trod on a Golden Plover's nest on Kirk Fell. The bird, feigned a broken wing to try and lead us away from the nest. On this occasion, the bird was nowhere to be seen. Perhaps it depends on the investment already placed in incubating them as to how much they put themselves at risk in an attempt to preserve their young? The one egg is slightly darker and this could be because it was recently laid and the shell was still wet. Arriving at Sron a' Choire Chnapanich, the breeze had dropped and I removed my jacket. On Meall an Odhar looking across the western end of Loch an Daimh towards a very distant Ben Nevis.

Arriving at the summit of Stuchd an Lochain - You can tell that it is a Munro by the amount of erosion around the summit cairn! The last time I was here was 12 August 1992. I was built like a whippet and pretty much ran up the hill back then! Heading up An Grainan, I disturbed another ground nesting bird. On this occasion it observed me from a safe distant, periodically giving out a call. I was able to photograph it, though at times like this, I wish I had a more powerful zoom! Despite about 1600m of ascent, I was feeling quite strong though my fell shoes had torn the skin off my right heel. They did give me extra grip compared to boots as I trotted down the west ridge of An Grianan, back towards the Loch Lyon dam. Back at the car and my thoughts returned to my need for fuel. I did not want to run out of petrol looking for it! However, Aberfeldy was not much of a detour from the route back to the bothy and I'm glad to say that the filling station was open. It is a Jet garage linked to a Coop. It seems to be open from 6AM to 11PM - always worth knowing!

As I had left my kit at the bothy and rode out with an almost empty rucksack, I returned with 10kg of coal and a bag of wood wool eco firelighters. I enjoyed a much warmer night and having eaten well (a strange concoction of Mexican rice and chicken in a white source that worked really well!!), slept like a log. . I remember visiting this pair of Corbetts in absolutely baking heat in 2013. I didn't bother to add on Stuchd an Lochain, although it looked nice from that direction.

Can't believe the garage has gone in Aviemore -- is that the one just down from the station? I know there used to be another one closer to the Coylumbridge turn off, but that's been gone for years. Perhaps it's just getting a refurb - damn sure it was still there in March.

I remember once having the university minibus down at Lower Diabeg, near Torridon. No-one had been paying attention to the petrol gauge all weekend and it was practically running on fumes at that point. Somehow we managed to persuade a couple of builders who were working down there to give us a bit of deisel from their jerrycan, which got us back to Achnasheen (not that you can get petrol there anymore). Not bad for a Sunday afternoon in January!

Yes, just after the train station on your left when heading out of town. There was some sort of construction taking place further out of town, but it could be anything.

When heading south, I will make a point of filling up at Morrisons at Alness in future. Petrol is usually more expensive in remote areas -if you can find some!

I could have headed back to Carrbridge but it is in the wrong direction. There is petrol at Blair Atholl but suspect it is only open during the day, when I am likely to be out on the hill!

Self service card transactions is the way to go so that petrol is available 24/7, especially along a major trunk road like the A9.

Exactly the same happened to me a while ago...when I finally reached a garage after 20 miles of driving on my 30 miles reserve, I could have kissed the ground!
You had a great day for those hills, the pictures inside the bothy look great!

Mountainlove wrote:Exactly the same happened to me a while ago...when I finally reached a garage after 20 miles of driving on my 30 miles reserve, I could have kissed the ground!
You had a great day for those hills, the pictures inside the bothy look great!

I think the answer is to fill up at the start of the journey and it removes any uncertainties later. Also probably cheaper from a local supermarket. Good to know that the Coop/Jet garage in Aberfeldy is open so late though. First time I've come across a garage operated by the Coop.

I enjoyed your photos of Bendronaig bothy too!

I think of petrol stations in such places as Achnasheen that have closed down.