Last Thursday frustration was building - I hadn't been to the Highlands for 3 weeks!) so I checked the forecast for Friday - bad in the West so I decided to leave that to the masochists (wisely I think - see Doogz post!) and headed for Braemar. Friday I started from Linn of Dee car park at 8.30 and headed up Glen Lui. Glen Lui with Carn a Mhaim ahead

I had vaguely thought of doing Carn a Mhaim and Derry Cairngorm but as it was clear and dry in the glen I decided to continue up Glen Derry and try Beinn a Chaoruinn - if the going was bad on the tops I could then return straight down the glen, otherwise I could continue over Beinn Bhreac. The path up the east side of Glen Derry is excellent (I didn't realise it had been a land rover track till I read the walkhighlands report). Further up the glen was getting more desolate and the weather was looking gloomier - had I made a mistake? Near the top of the glen you can see into Corrie Etchachan with its gloomy crag. I could just make out the Hutchinson hut where I once spent a really miserable February night - it's not 5 star! (But it's better than being outside) 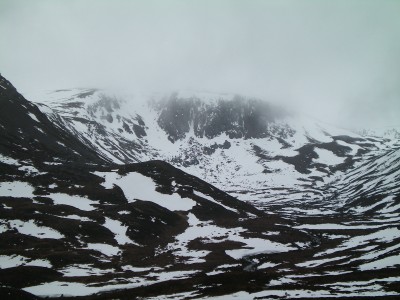 At the top of the glen I turned east up Beinn a Chaoruinn, now in light but steady rain. Luckily the going was easy and there was not as much soft snow as I had feared. I made several attempts at a summit photo, but gave up when my hands froze and the camera was running with water. Here's the best.... Too miserable to stop for a cup of tea

As I was already soaked I decided I might as well push on to Beinn Bhreac. Fortunately the boggy bits were covered with fairly hard snow, so it was an easy crossing, enlivened by a view to the West over Corie Etchachan (see photo - the crag at left back is Coire Sputan Dearg, the centre crag is Creagan a Corie Etchachan, and at back right you can see Shelter Stone crag...I think). Now it was down to the glen and the long walk out. It was Friday night and I passed lots of people heading up to the bothy near Derry Lodge - it must have been full. I was glad to be going back to civilisation.

Nice pics bb, and well done - I wouldn't have liked that much cold, and my family draw the line at walking over melting snow - too horrid for words!
Walking in up that path I took a tumble into the Dee and broke a lovely old Pentax ME Super camera much to my disgust.
Always seems such a LONG start to any walk trotting up the glen there.
Is it just me or are the bothies down there always full? I've had to bivvy outside a couple of times.

NIce description and photaes.
It's the walk back out of Glen Luibeg, which always gets me.
The car never seems to get any closer. I liked the photo of the summit - nice wind chill at 4000ft?

Yes the walk up to Derry Lodge is very pleasant, but frustrating when you seem to have to do it as an extra to any mountain expedition. I could almost be tempted to break my rule of not using a bike for Munro bagging! And the bothies are often full, especially Friday and Saturday - they are not that big anyway.
Here's one more photo - an unusual fallen tree polished on the underside of the arch - probably lots of deer having a good scratch. scratching station for the deer?

Edit - bad luck about the camera Myth - I won't ask for details of your encounter with the Dee!