As I probably won't be heading to Skye in the near future I thought I'd pull a report out of the archives to remind myself of one of the best days I've had on the hills.
My 2004 visit to Skye was notable for a couple of chance meetings. Firstly I was Just getting ready to do Blaven when I bumped in to a Dutch walker I'd walked down from Banachdich with 2 years previously I ended up walking to Blaven with him. Secondly I met up with a walker (Mike) who had been staying at Pete Thomas's place in Portnalong 3 years previously and was staying there again, as I was.
I decided to do a couple of walks with him and his girlfriend, the other was Bruach na Frith which I may bore you with later.
Setting off from Glen Brittle we headed past the Eas Mor waterfall in it's spectacular gorge and onto the spur end of the West ridge of Sgurr Dearg. After a steep initial climb to the shoulder of the ridge the gradient eased until it narrows dramatically. If my memory of past trips is right there is a path for some of the way to the summit but spurred on by Mike's enthusiasm and my desire not to look wimpish in front of a lady

we stuck to the crest of the rige to the top. Views back to Lock Brittle and Coire Lagan were amazing. Today I actually saw Sgurr Alasdair too and the full length of the Great stone shoot, places I'd been to the previous year and not seen a thing due to mist. We hadn't really seen any one on the ascent but on reaching the summit of Dearg we were greeted by a dozen or more people all waiting for their moment of glory - the ascent of the Inn Pin, the true summit of Sgurr Dearg. I have to say the first time I did this I was most put out to find that I couldn't say I'd bagged a Munro as I hadn't done the Inn Pin. Still the views were fantastic and we were grateful the weather was still excellent.
This was an ideal time for a well deserved rest so we spent a good hour or so watching climbers ascend and ab of the Pin. One guy, obviously an expert was up in a couple of minutes and wandering around the slope on the top like he was walking down the street before rigging up climbers for the descent. Talk about no fear!!
It was time to move on so we made the steep descent to the Bealach before scrambling the ridge to the Summit of Sgurr na Banachdich. Banachdich is just about the halfway point on the ridge and it's position allows clear views to both North and south of the ridge. Loch Coruisk looks impressive 3000ft below too.
We headed West on the final leg of the round gaining the ridge of Sgurr nan Gobhar following it to it's abrupt end above Glen Brittle. Now all we had to do was to get down. Mike suggested we go down the gully which splits the spur as if it has been slashed with a knife. "O.K". I said and with much, slipping, holding on for dear life and cursing (all of it from me) we made it down the incredibly steep slope in one piece. I've now named it Mike's Gully in his honour, although I'm sure it's a well used rout on and off the hill. It was then a straight forward walk back to the car and off to Portnalong for a drink or 4 and a review of a fantastic day out.
Neiter my words or my pics can do justice to this or any of the sights to be seen on a good day in the Cuillin but I'm posting some anyway. 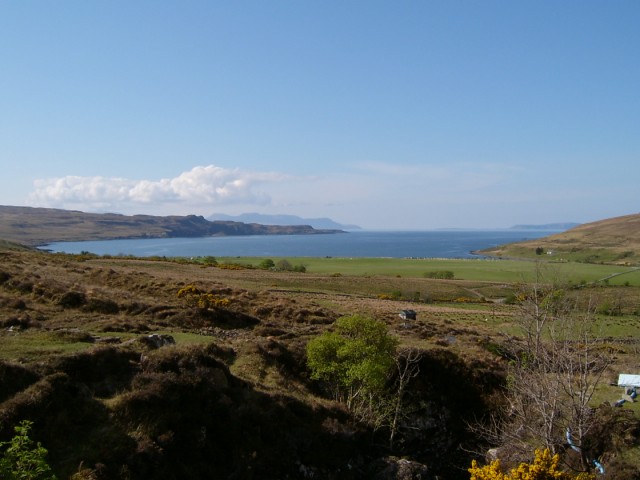 Loch Brittle in the morning sun. Climbers on the Inn Pin Mike (and friend) on ridge to Banachdich 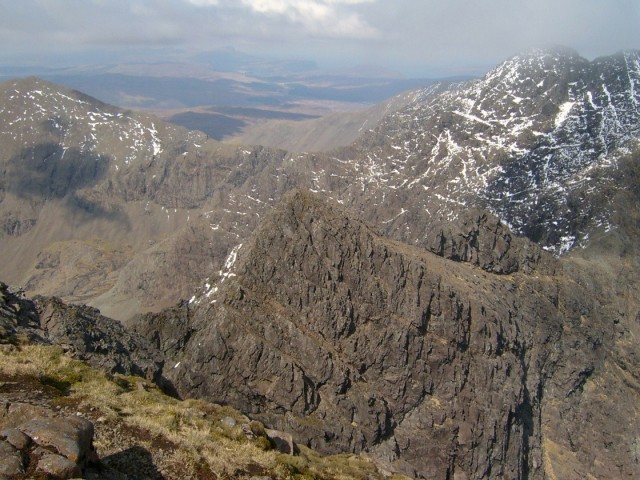 The ridge to Sgurr Nan Gobhar 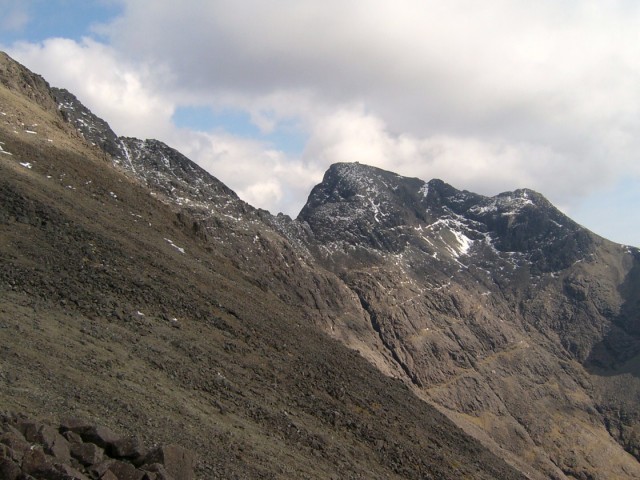 Okay, I've seen a bit I can do... the ridge down to Sgurr nan Gobhar... full stop! I can see an hundred better ways off the end of that than Mike's gully!

Trust me M.C. in the right company you could do what I did that day.as I said about Dearg there's other ways up other than scrambling the ridge.

Maybe - someone mentioned a while back that they took an easier route up to Sgurr Dearg - from Coire Banachdich I think they said - did you go up from Coire Lagan or something?

No I went up the west ridge. but there is a bit of a path just below. You can see walkers in the pic. Well maybe not at this size but they are following a line below the crest. Never been up coire Banachdich, came down it (eventually) after spending an hour or so scrabbling round the cliffs to find the path. Absolutely stunning pic! Not sure whether I can see them or not - are they high on the left hand side of the pic?

just below the patch of snow furthest up the mountain

I can see a fairly natural line going right to left but don't think you mean that one - the other is going from the centre of the pic out to below the peak on the right - through the small snow patch - is that the line you mean? Where is the summit? off the pic to the left or the small peak on the right?

That's not actually the end of the ridge that you can see. The peak on the left in the distance is Sgurr Dubh Mhor, which is a spur east of the main ridge. The main ridge continues south and south-east to Sgurr nan Eag and Gars-bheinn and isn't visible behind SDM.

That's not actually the end of the ridge that you can see. The peak on the left in the distance is Sgurr Dubh Mhor, which is a spur east of the main ridge. The main ridge continues south and south-east to Sgurr nan Eag and Gars-bheinn and isn't visible behind SDM.

I stand corrected, Thanks. Looking closer I see what you mean.
M.C. It's hard to explain on such a small scale pic. Suffice to say as far as I can remember it's well doable without many complications. Any way chances are it will be misty so you wont see anything to panic you. I went up 3 times in mist before getting a day like the one I had. Might bore you with Bruach na Frith next!!

Well thanks for the help anyway... and I panic much more in a mist - then my incredible imagination takes over!

I did Sgurr Alasdair from Sgumain in the mist on only my 2nd outing on Skye. Had it been clear I think Id have been a trembling wreck having subsequently seen in photos what I'd actually scrambled up. I walked with some experienced guys that day who could have done the route blindfold. Having mountain rescue lads in your walking party is a great confidence booster.

Well I think it will end up just being me and Richard as usual - don't think we'll be able to afford a guide for most of them... And as he has much less experience than me (although a great head for heights etc so useful as a scout for the scrambly bits), and I am the walk planner, that also means I'm the walk leader. In areas where I'm not confident, that makes me feel much worse! Maybe we'll have to get a Walkhighlands meet on Skye - I'm usually better in a group!

That might be an idea... we could give you a lift up (blindfold and sedatives provided

- I don't like being kept back behind slower cars!

). That would save on expenses a bit... What kind of accommodation would you be wanting?