Mount Keen, of The Far East.

Mount Keen, of The Far East.


Catching up on previous hikes. This was a trip to the Far East. Not Hong Kong, just felt like it. The weather looked best for this part of the world, though was going to be on the chilly side and windy, too! So, it was up at silly o'clock, for the long (178 miles) drive to this, the most easterly outpost of the Munro ilk.

We pretty much followed the route as described on WalkHighlands. Glad we opted not to take bikes, as the route was very stony and with that wind against us, it would have taken as long as walking in. I remember it taking longer than expected before the Queen's Well comes into view. This apparently, was built on the site of a spring where Queen Victoria stopped on a pony trek in the Angus glens (again, from WH's Ladder Burn, way up, or down!

I can't remember when exactly, but must have been somewhere toward top of zig-zags in Ladder Glen, that my foot started to nip. Was wearing new socks, but otherwise couldn't figure out why my feet were starting to blister. Carried on a bit, but then had to stop and change socks, while meantime, Big Jasper continued on to survey the route. My pit stop made little difference, but there was no point turning back. Walked too far, never mind the drive! Mount Keen, behind yours truly.

By now the wind was really picking up in strength, about 45mph, as we reached the snow line. Temp with windchill must have been about minus 15C. Learned the lesson that it is better to put on extra clothing before the wind makes it impossible

Even with extra gear on, it was still bitterly cold and communication almost impossible, except by the loudest of shouts. We ploughed on up the somewhat unimpressive slope, to the cairn and trig point, atop the rounded dome. Views from the summit were limited, so we didn't hang around much, before heading back down. Trig point, over to Lochnagar. Yeh, it was that cold! Met a few others on their way up, perhaps a bit luckier as the wind started to ease. Managed a few pics of Lochnagar hills, dropped back down to Glen Mark and the longish trek back to the car, where my feet enjoyed the release from the inferno raging inside my boots

For all that was still a memorable day, most notably as it was Big Jesper's 141st! Jaf, on way down to Glenmark Cottage. 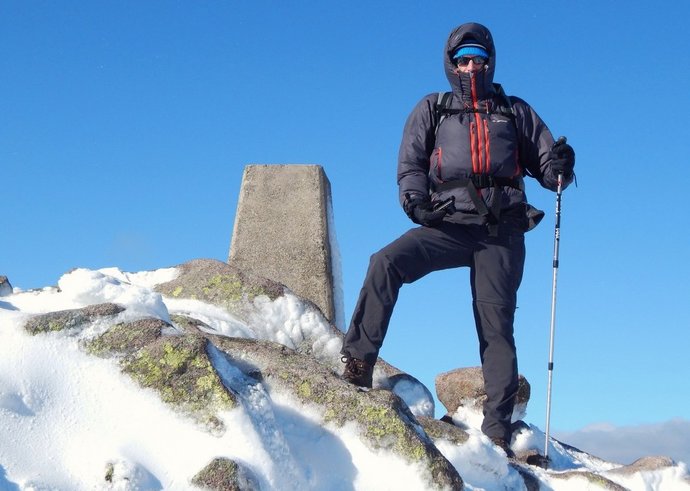 Big Jesper, on the halfway mark. Over to cairngorm hills. Lairig Ghru just about there, too.