Another day off another Munro.

Pieplough and I had a mutual friend in town, we had plans to meet up to watch a sporting event together around 6pm so it would have to be a short walk today. Corbetts crossed my mind but honestly I've been Munro focused this year so an opportunity to do another wasn't going to be wasted.
Beinn Fhionnlaidh caught my eye on our last venture out together (viewtopic.php?f=9&t=72297) so I done my reading, it seemed a straight forward day out.

2 hour drive there followed by a 5 hour walk and a 2 hour drive back would leave us plenty of time to do our meet up. Lets do this.

Pieplough had driven the previous day to Callander from Glasgow just for a pie and a cup of tea so I was driving today.
Leaving before 8am the roads were fairly clear. Progress was good but that darn A82 was choking with 40mph campervans. The rain was absolutely hammering it down too but we were keeping faith with the weather forecast, it was to clear by 10am with bright spells to follow until around 1pm... we'll see

That darn A85 with campervans and that darn A828 with, you guessed it, bloody campervans! Our journey was a bit longer than expected and by the time we arrived at the carpark it was already past 10

2 other cars were already parked up but the occupants (and their pets) were still about. As we got ready the midge descend so boots went on in super fast time and off we went just a fee minutes or so behind the other 2 sets of 2 (people).

The walkhighlands description for stage one doesn't include the very handy signs to help you navigate your way to the hill. It's also worth mentioning there's a new house being built before the white cottage and you pass to the right of this as well. 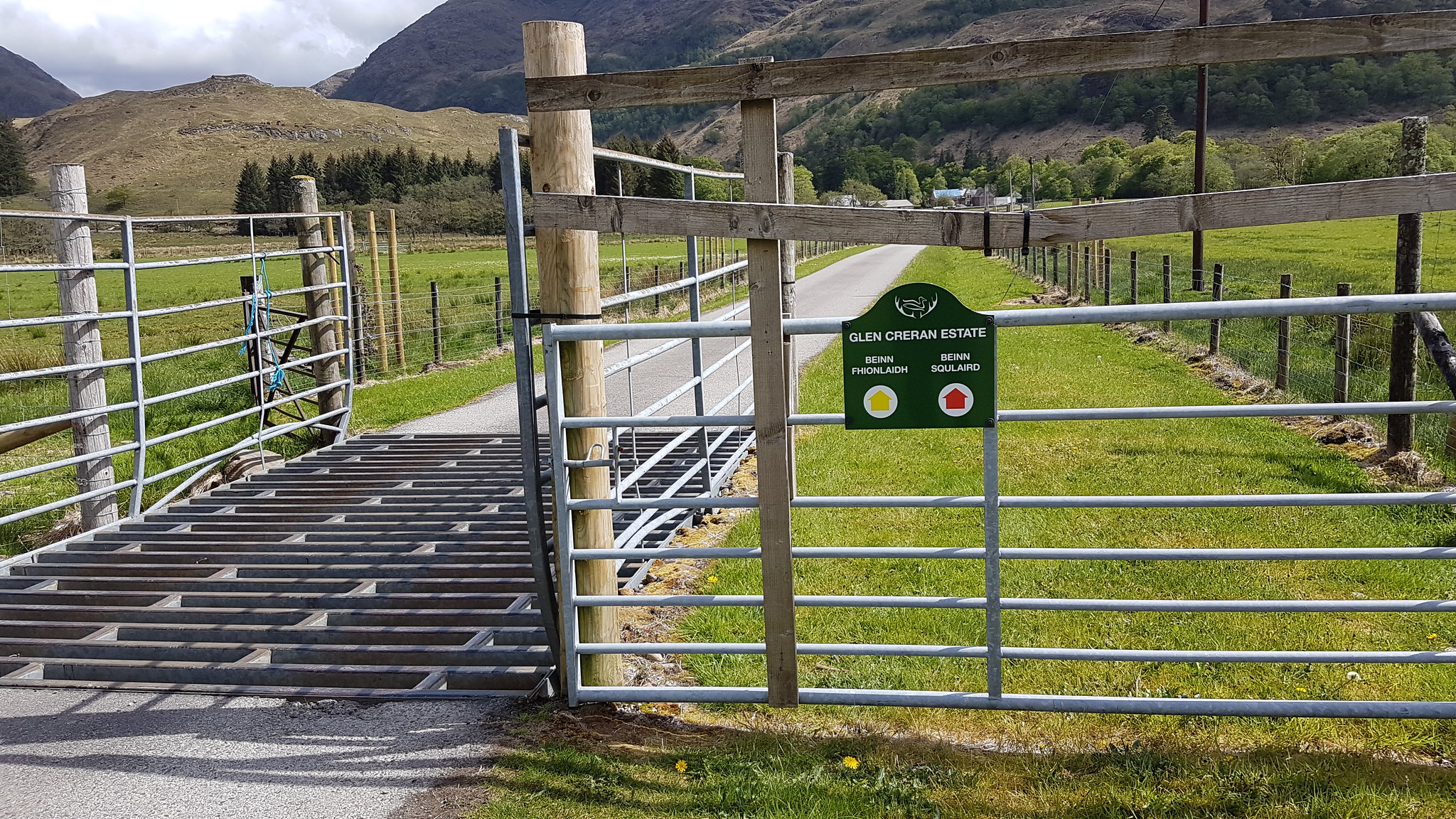 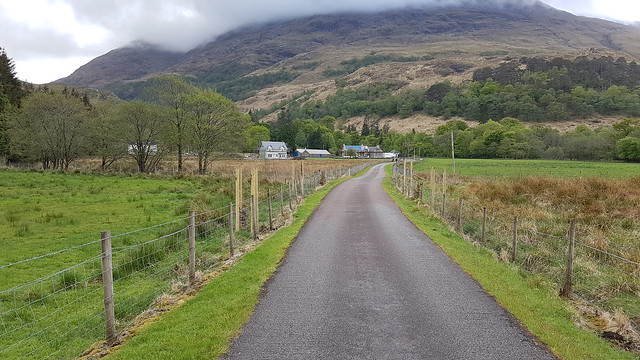 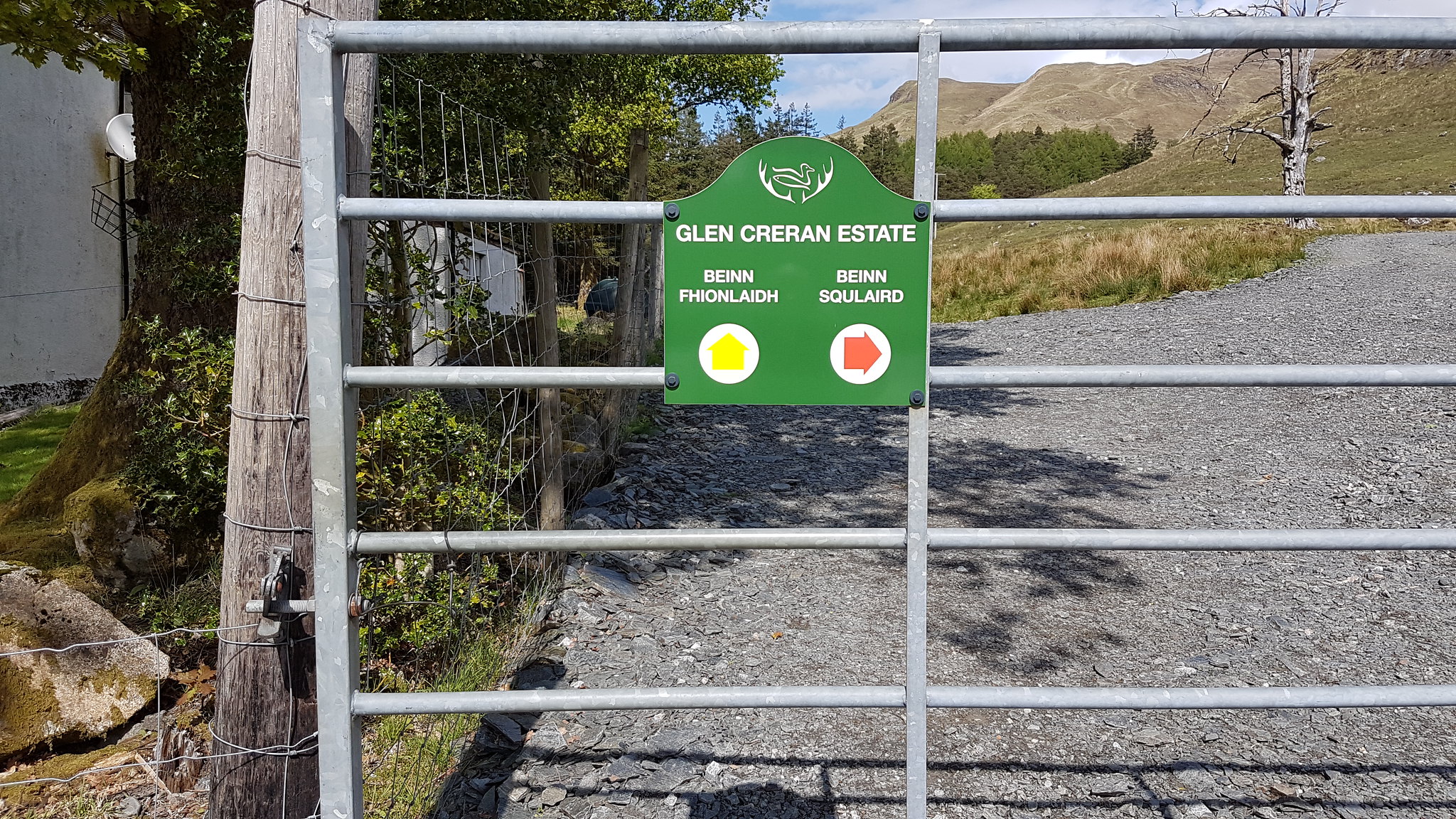 Once through the gate into the small woodland area with impressively tall trees there's a post with a yellow arrow to point you up the rough road. If you miss this sign post and find yourself in an ares freshly cut trees just turn around. 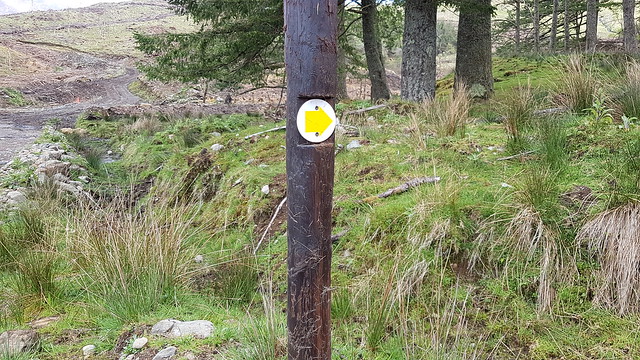 The road stops but the initial path is obvious, there's a small marker cairn marking a split in said path. Seemingly it makes no odds which path you take as they go the same way. 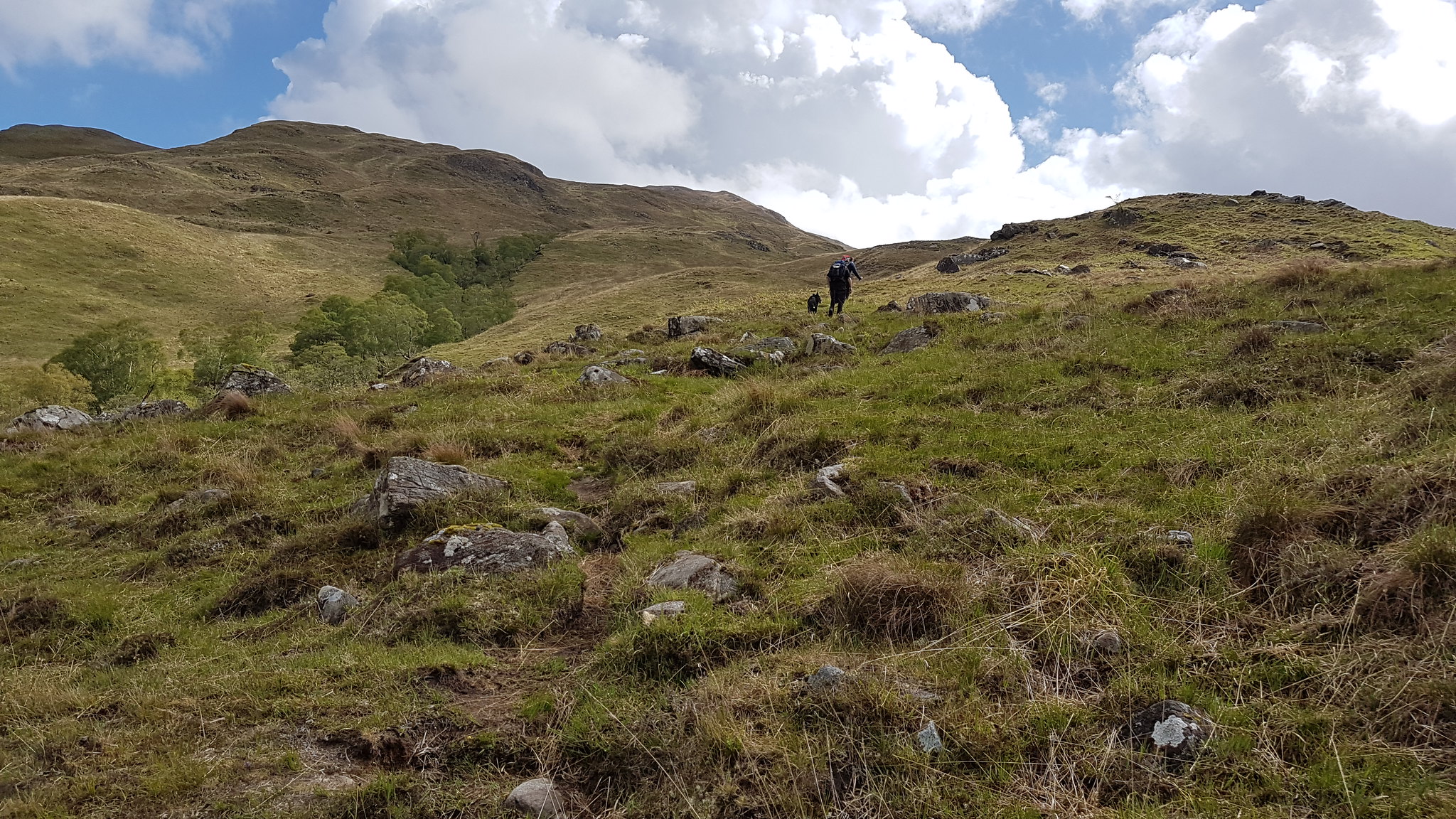 Stepping on to the open hill

We had caught up with the other walkers and were all awkwardly shuffling along a single person path for the first quarter of the walk, passing and being passed over n over.

I won't lie, I was absolutely hanging out my arse for the first part of the walk. Really struggling to keep up with Pieplough who was well ahead of me. Unable to get control of my breathing it felt like my heart and lungs were out of sync. The sweat was gushing from my face but more concerning was the light headed feeling I was experiencing, several times I stopped for several minutes to get my sh*t together.
The worst feeling however was that I'll be letting my friends down later because of how slow my progress was, I felt embarrassed in front if these strangers. Sometimes I can be my own worst enemy.
Pieplough even commented on how much I was struggling (after waiting on me catching up), he said he hadn't seen me struggling like this for ages...I can think of many examples like this

I told him I didn't know what the problem was.

We kept moving forward, one step at a time. Trying to relax my breathing I would inhale/exhale slow deep breaths, getting my head together. Whatever I was doing worked because before I knew it the big man here started to fly up side of the mountain

Very much in the zone we caught up with the first of the other walkers who kindly stepped out of the way and quickly after the second walker done the same exact thing. The other 2 were a bit further on but we managed to catch them up and pass them as well on a steep section.

I took the chance to have a look around me, the clouds were clearing as forecasted and the views were starting to open up. 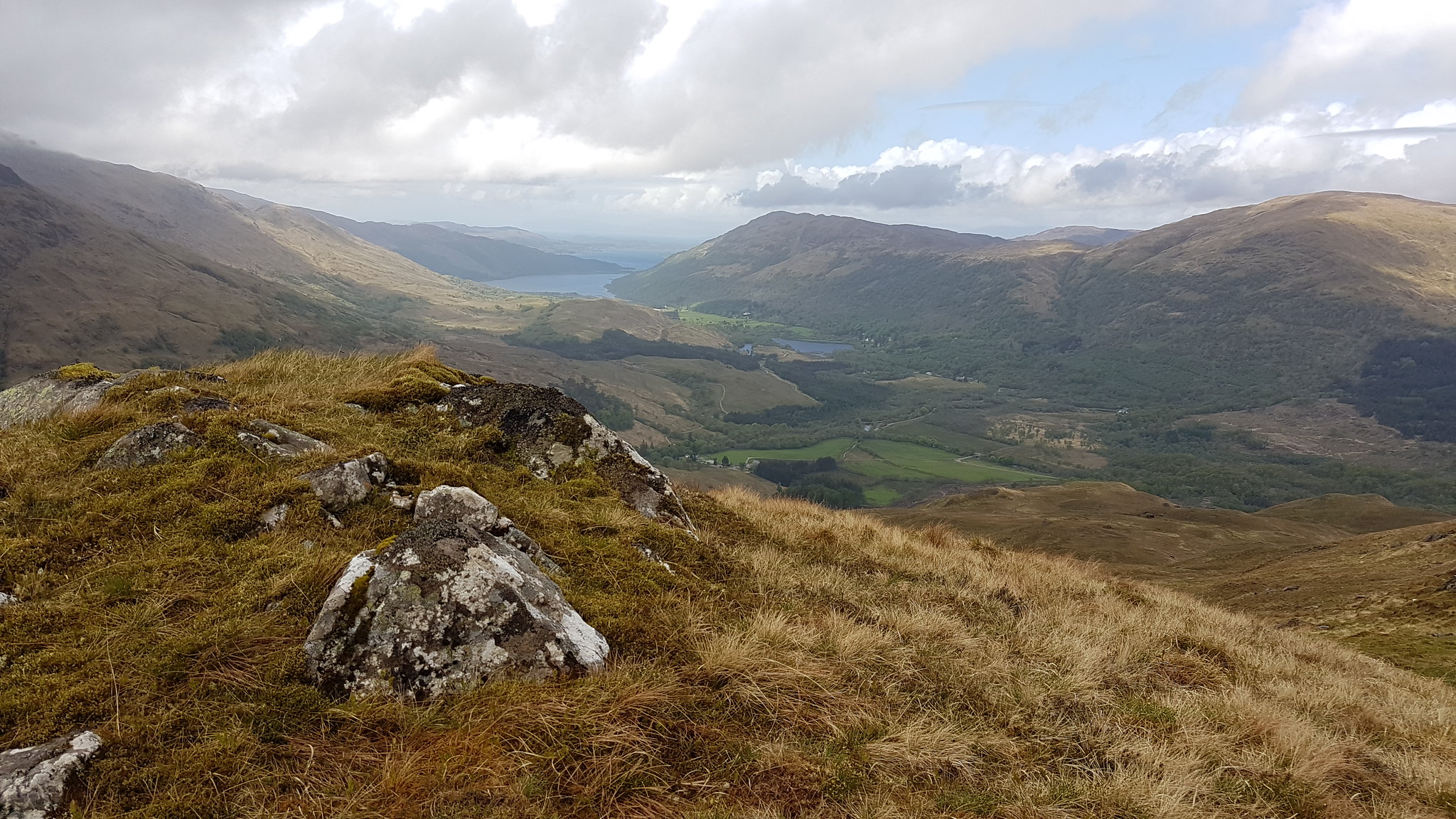 An Grianan is maybe the most impressive looking wee hill I think I'v seen, if we were not on the clock this would have been climbed today. 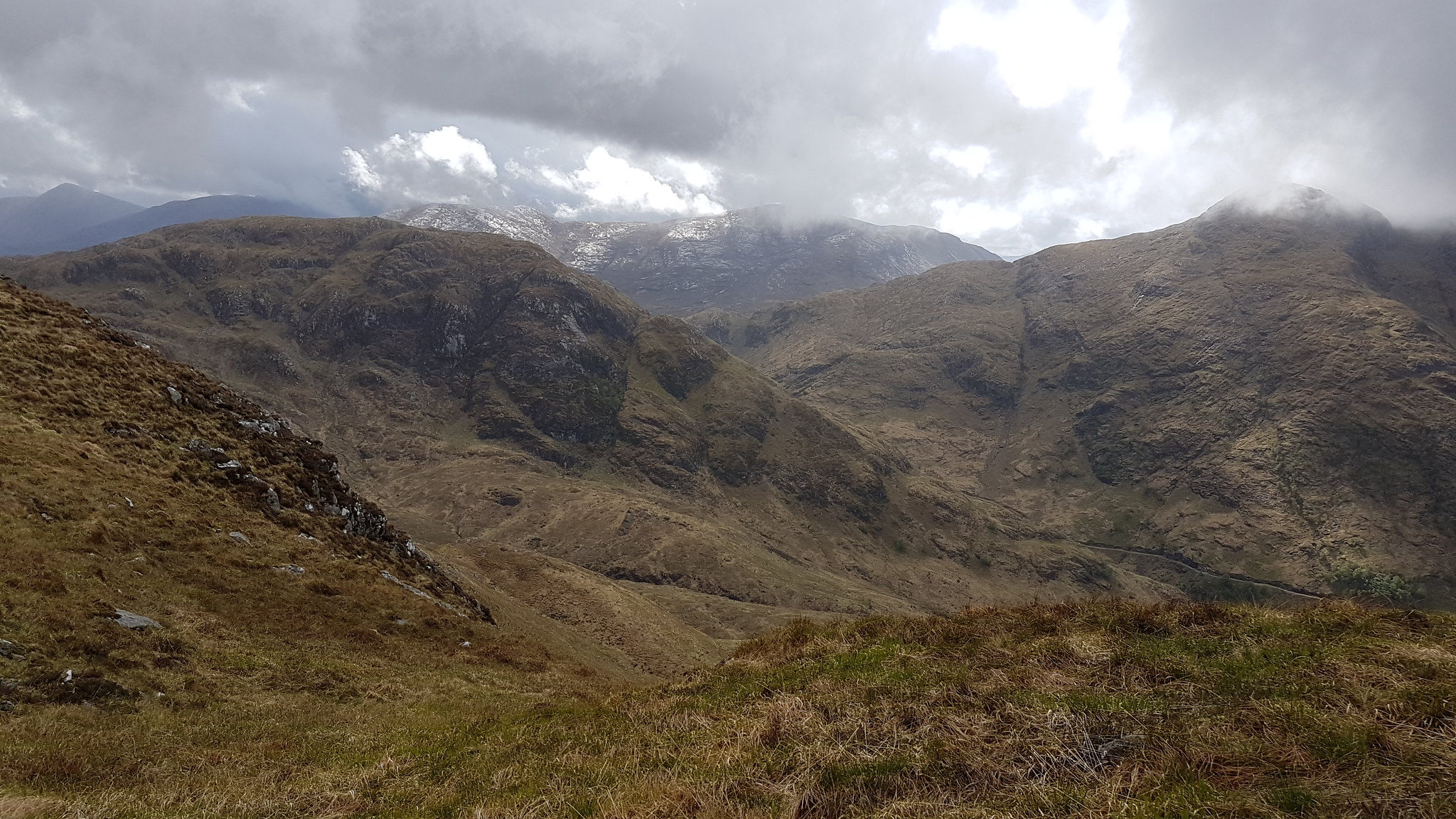 Once we were done with our break it was time to get moving again. The other walkers were well out of sight now, no matter we now have a space to walk and talk freely 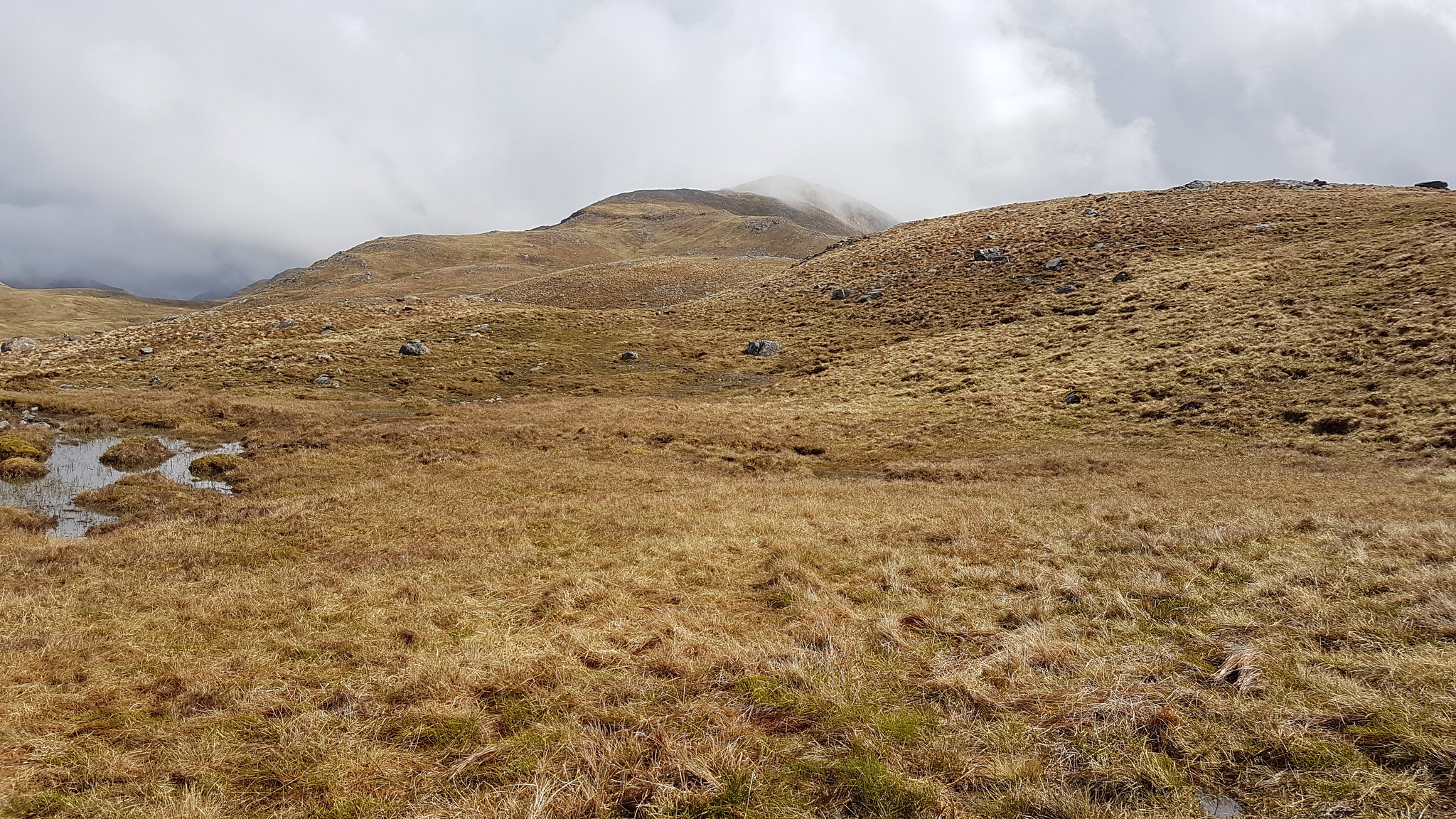 All the while the weather was improving, Pieplough had taken off and put his fleece on a bunch of times already, make up your mind

It was tad breezy but it wasn't jacket weather. 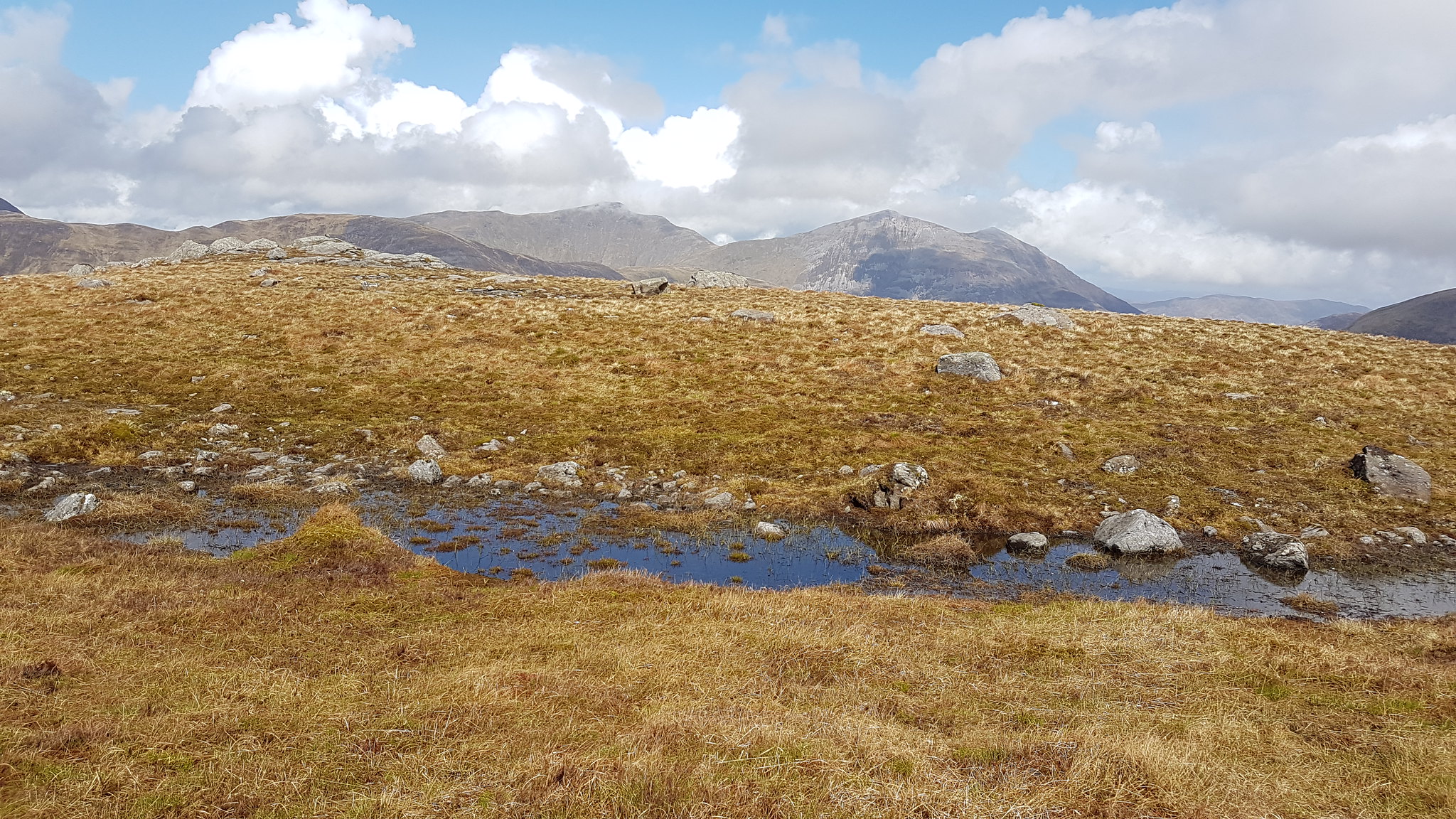 I was looking forward to the level section of the walk where the lochains would be because I knew we'd be over the hump, broken the hills back so to speak. 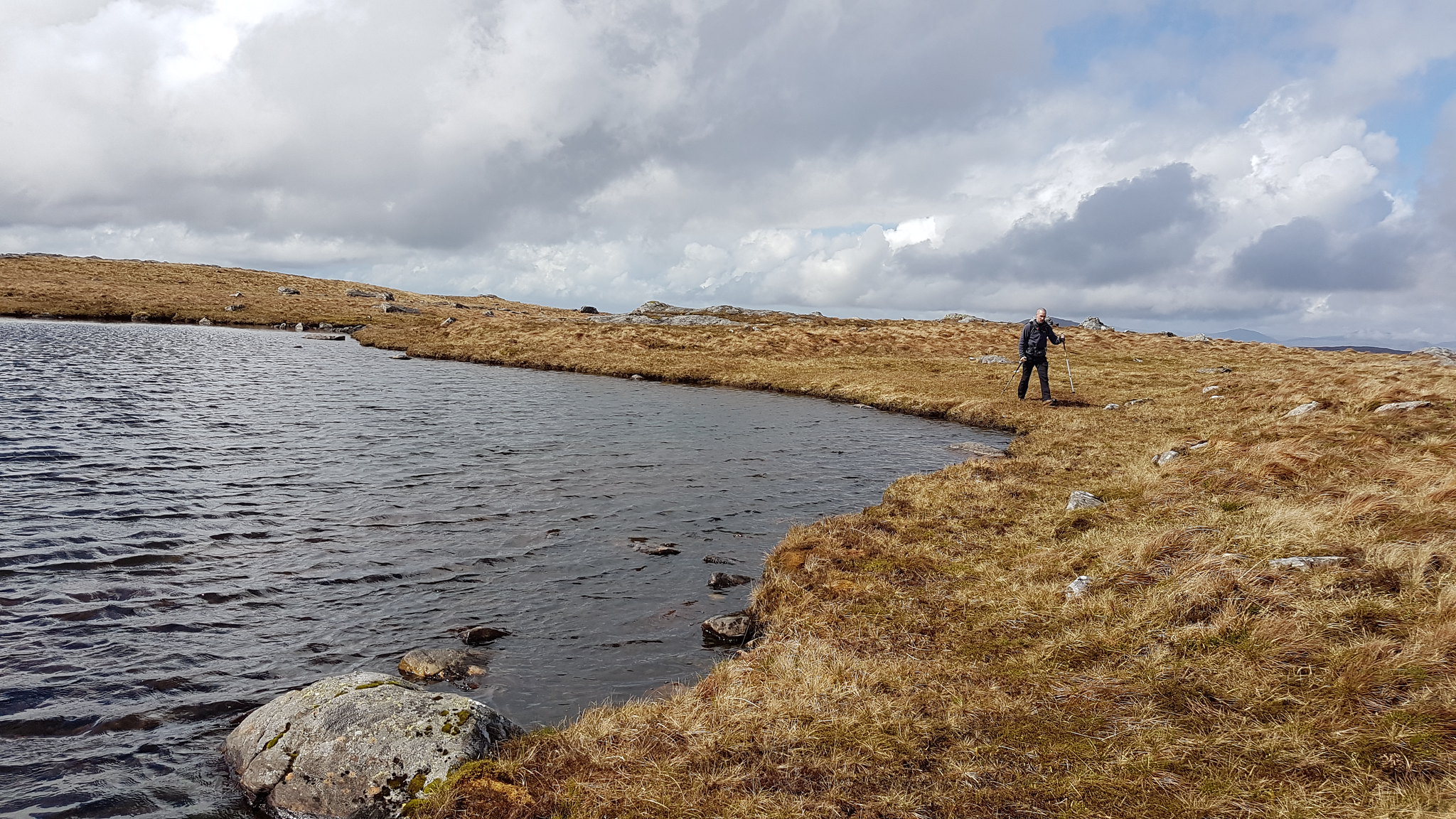 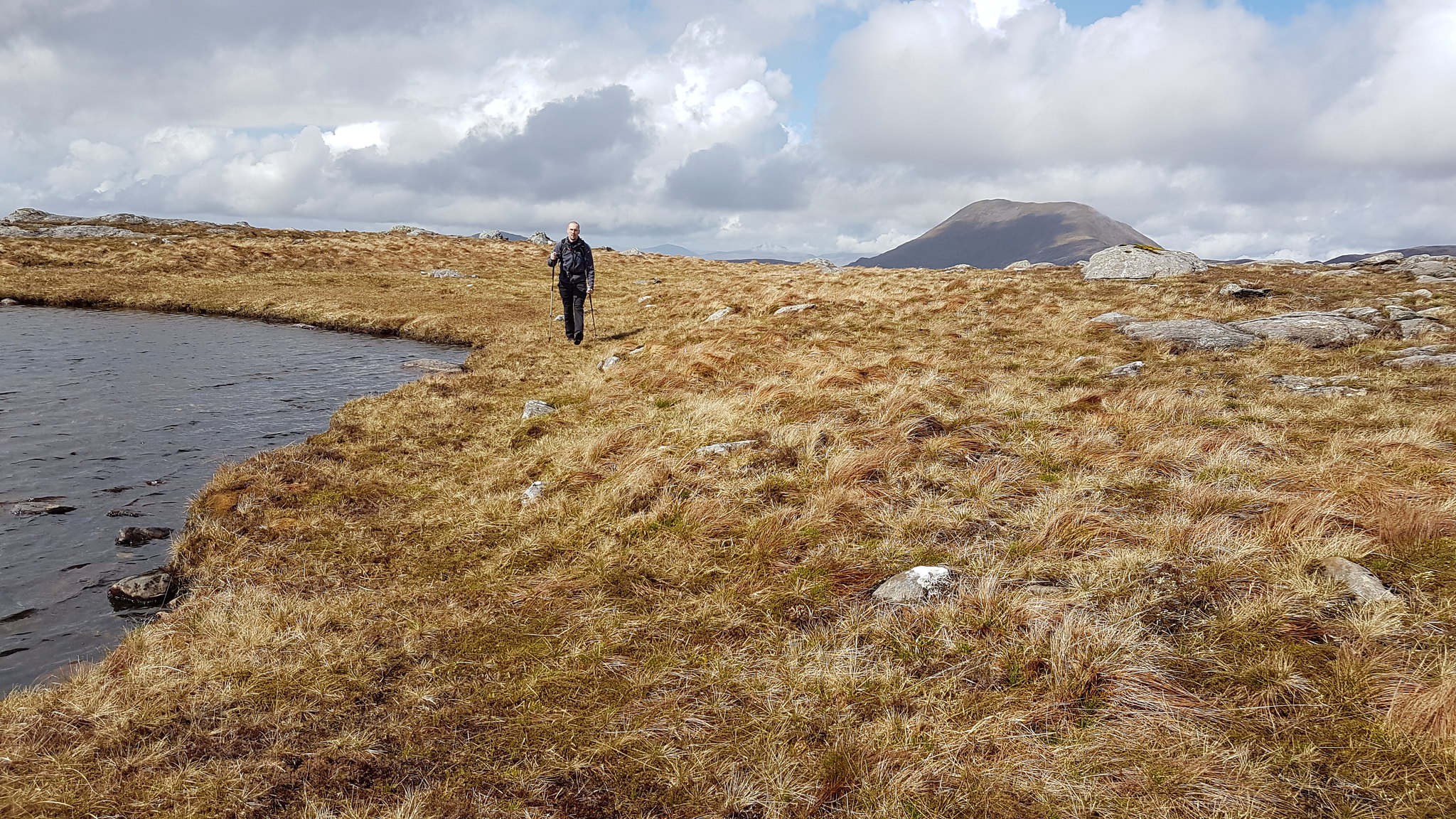 We had continued our decent pace we found before lunch and now the other folk came into view, we were catching them up rapidly. 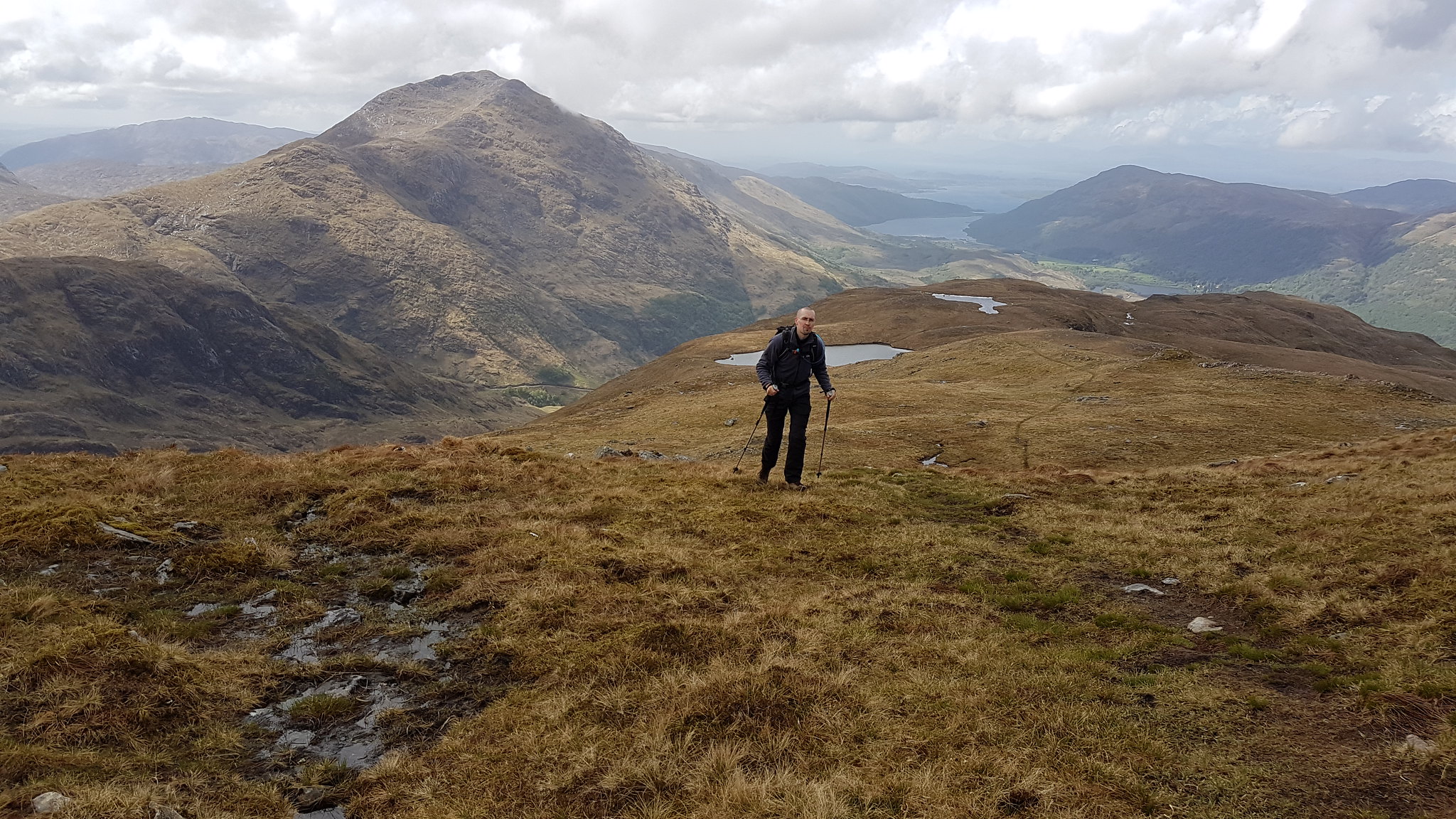 PP got a bit excited when he saw what looked like a potential summit but unfortunately for him it wasn't. 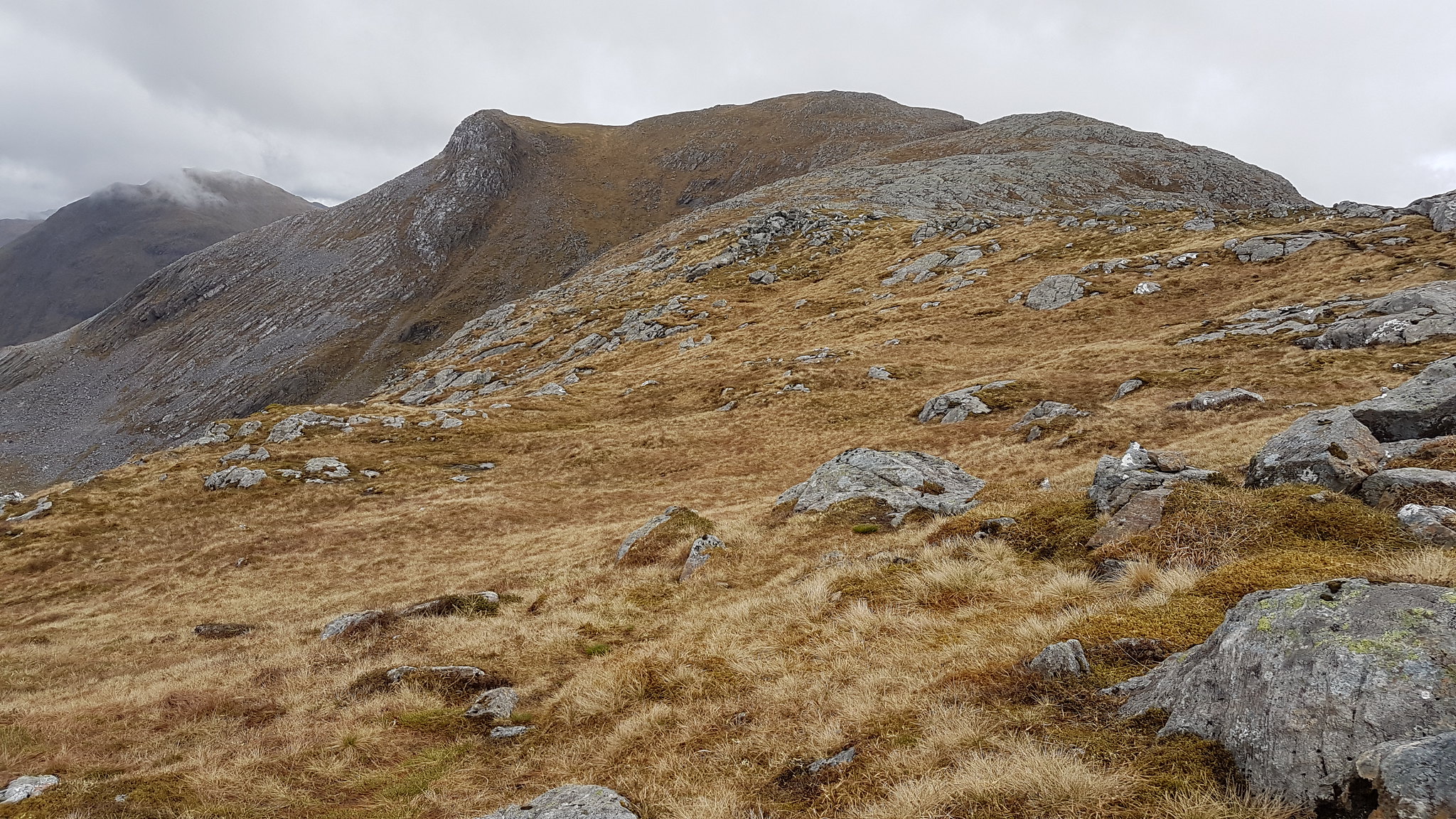 This is almost an exact reverse of a picture I took when I walk those 2 hills. 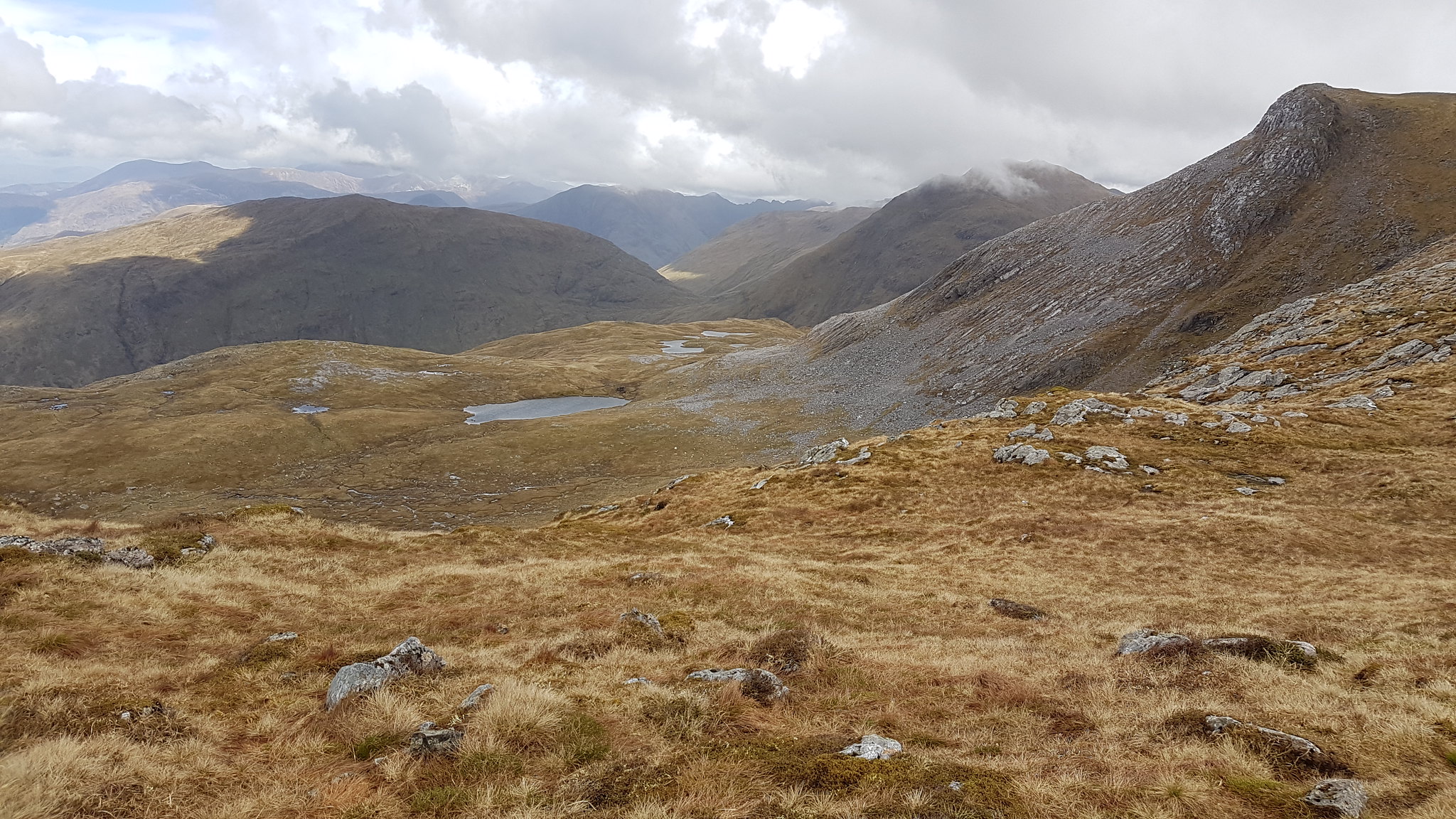 The grassy ground started to give way to rocky ground and it was here that we passed our rival hill walkers in the race (in my head) to the top, this sort of steep rocky ground is my jam, I much prefer to walk on it opposed to prolonged stretches of grassy incline like most of this hill is.

Bursting a nut we had opened up a gap back to the other walkers and we lost sight of them as the clag closed in. We had been following a vague path but it seemed to end rather abruptly at what can only be described in military terms...medieval castle moat or a Roman rampart and ditch perhaps?
This was the final obstacle before a more gentle rocky rise to the summit which appeared out of the gloom.

Fatty here was first to the summit, I wouldn't have believe it if someone from the future told me this an hour or so ago 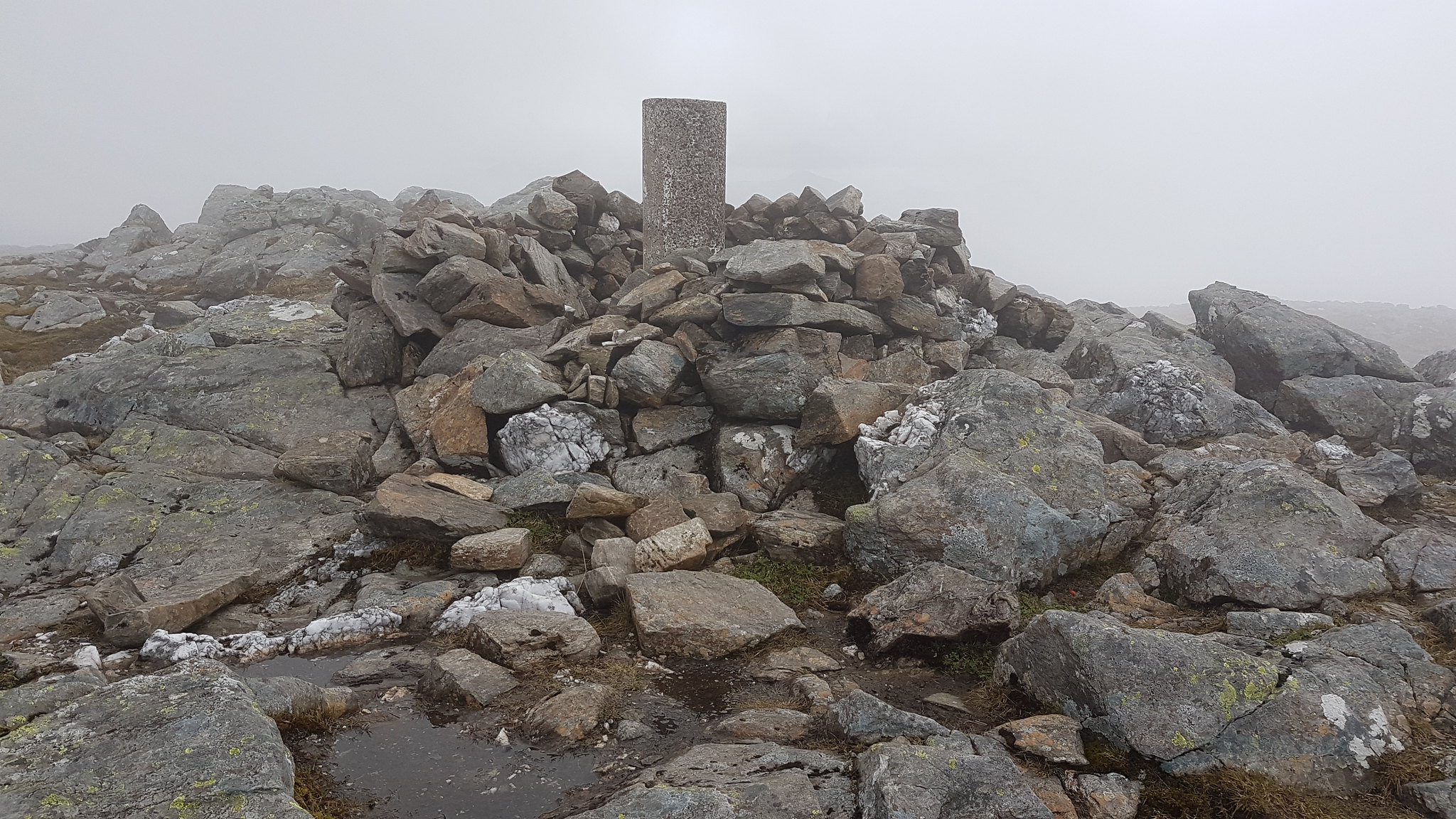 We only had waited for 5 minutes or so before the clouds cleared, we rushed a few summit shots before the others joined us and when they did we left. 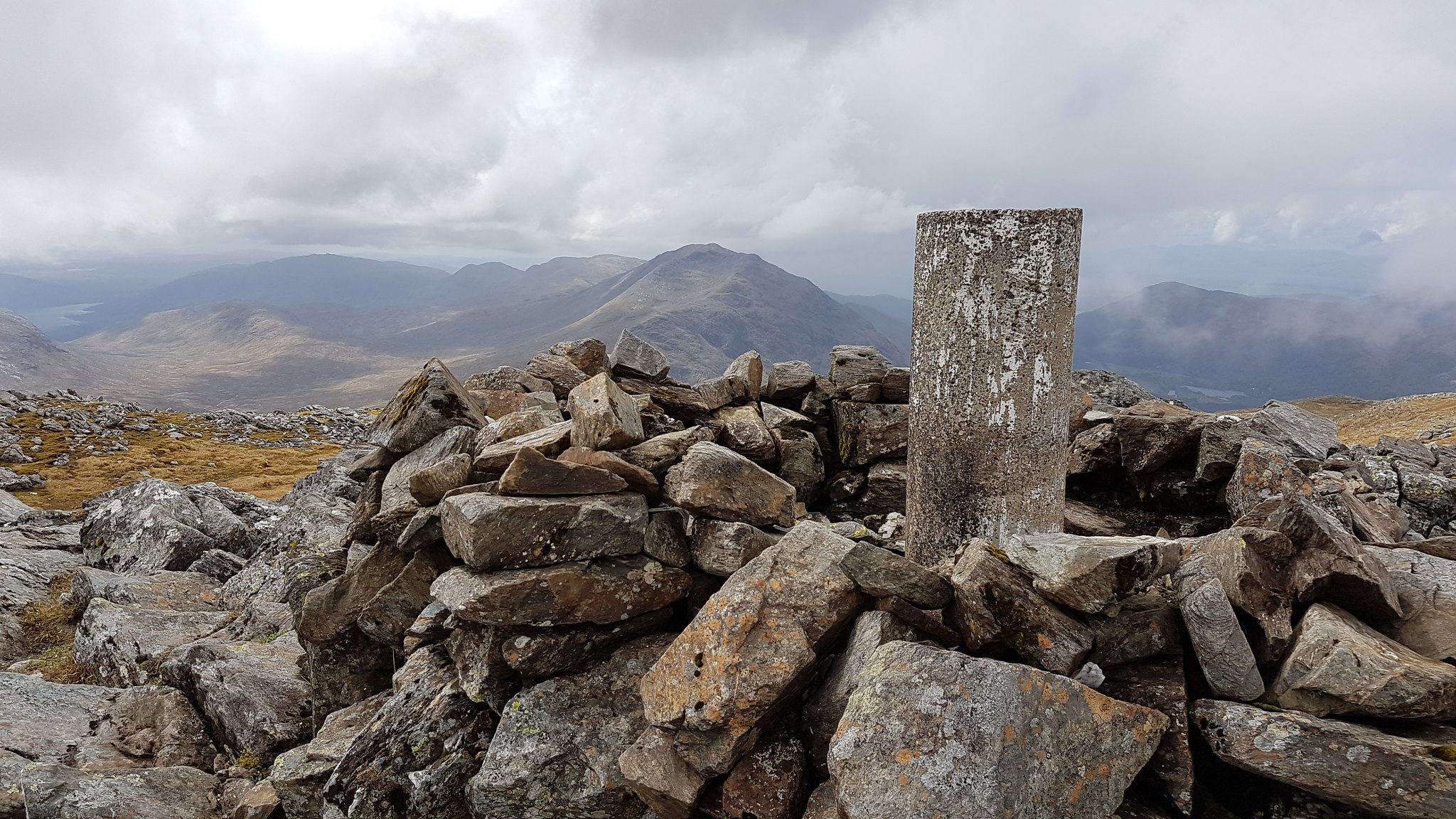 We marched down the hill following a total different path and somehow managed to get kinda lost...I mean we knew exactly where we were yet we on a different area off the hill to the one we walked up. How was this even possible in clear conditions? I mean, we could see the houses for god sake

We started to come back towards the 'path' after spotting a person heading up the hill, it was tiny course correction but traversing the hill proved a tad uncomfortable because in the rush to avoid the midgies in the morning I hadn't tied my right boot tight enough and now my ankle was rolling all over the place

The skies were bright blue now, and the last part off the walk was in glorious sunshine. 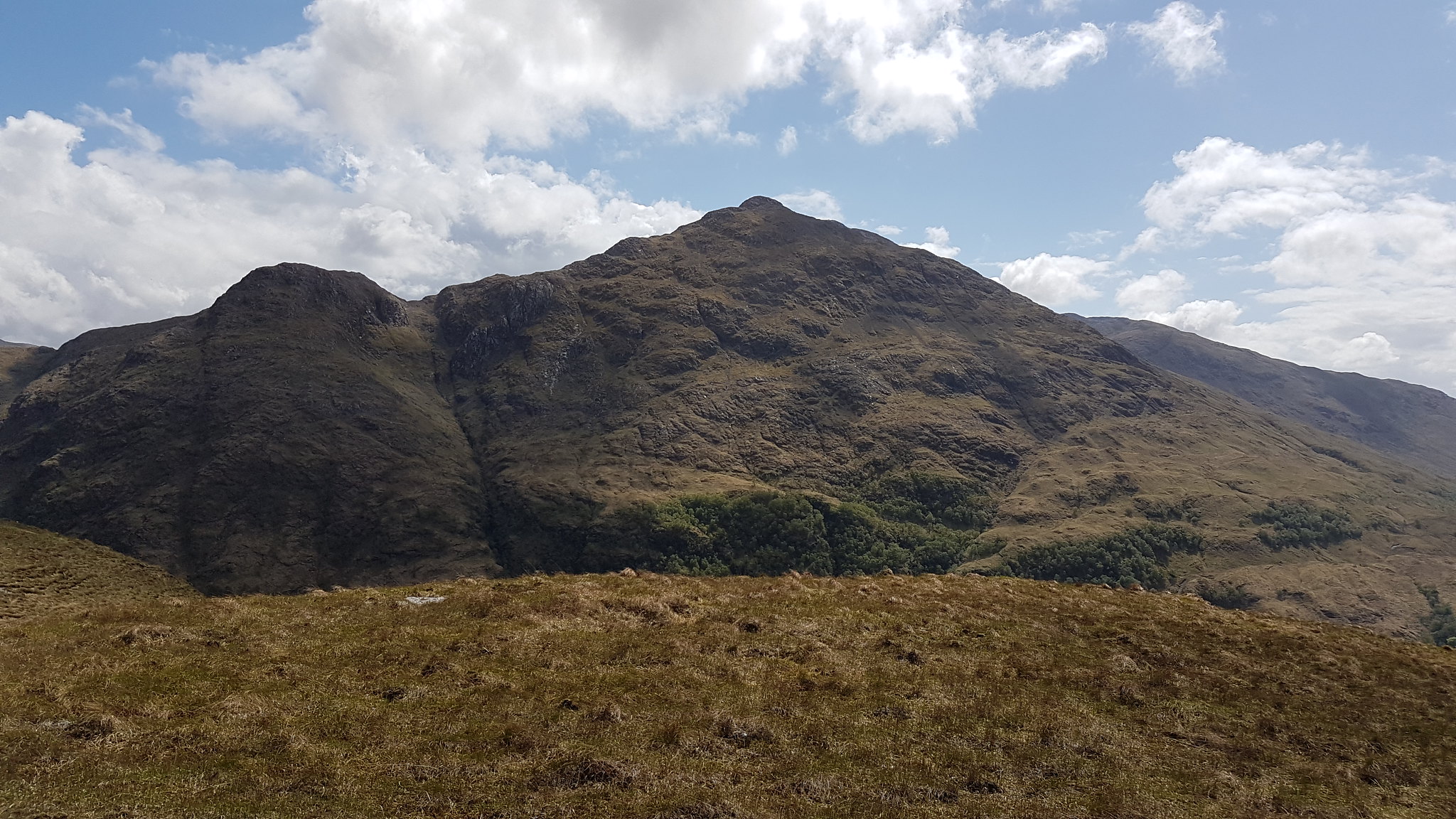 We made it back to the car just gone 3pm so we had done it in under 5 hours leaving us a spare hour as we had given ourselves 6 hours in which to finish... this means we'll be home a full hour early right? WRONG! So so wrong, we hit the road (after being devoured by midges again) only to be stuck in slow moving traffic from Cruachan power station to Glasgow, no joke. We we on the road for 3 hours on the way home so that extra hour gained was for nothing ultimately