Crock and Hare without the forest

Crock and Hare without the forest


Reading others' WH reports before tackling an unknown hill is always useful, and for today's pair it was essential. Information about tree-felling improving access competed with more unwelcome tales of piles of dead timber to be surmounted and missing bridges. So thanks to superstar_tradesman for his report on Crock and to wjshaw2 for his on Hare Cairn. Both revealed that what is shown on OS maps and found on Google Earth is well out of date. Large areas of forest have been felled and access is now much easier to both hills. But not for all time as much has been replanted and tens of thousands of saplings will eventually restore the challenge!

There was just one white van in the car park at Freuchie when I arrived at 10AM. As I walked along the track to Tulloch I met the driver with his three dogs coming towards me and we commented that the cooler overcast conditions were better for walking than the sun and heat of the previous few days. That was my first and last encounter of the walk. Not long after passing Tulloch and before the gate across the track I set off uphill through a clear-felled area and followed what must have been an extraction track for the timber - two parallel grooves pointing straight uphill. 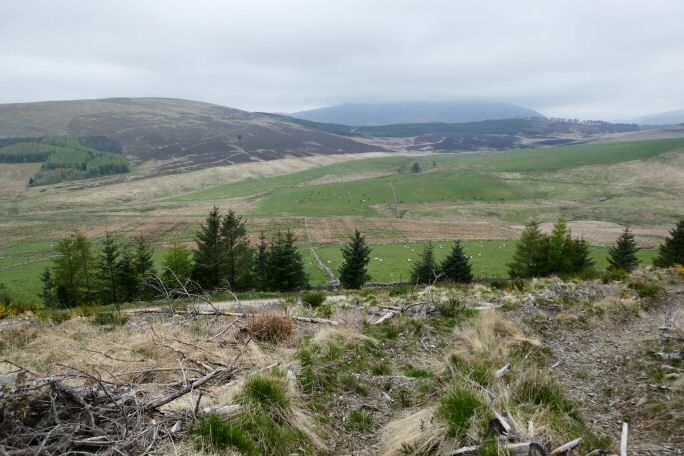 Mount Blair cloud-capped from just above the track past Tulloch Following the twin grooves up Crock

They continued almost to the higher forest road. After that the gradient lessened and I soon reached the heather-clad summit area though it does include plenty of small self-sown conifers. On the way up I had been sheltered from the wind by the hill so when I stopped for a snack at the summit cairn it was on with my jacket. A partially denuded Hare Cairn was visible through a slight haze though Mount Blair's summit was hidden in the clouds. The cloud base did rise later and a few isolated areas of blue sky and even some sunshine appeared from time to time. 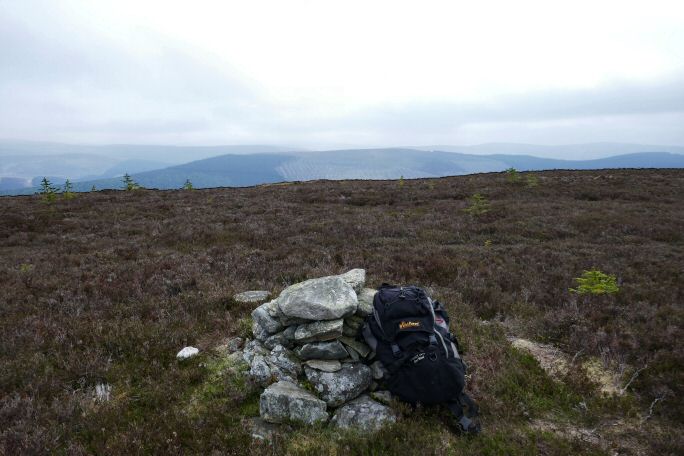 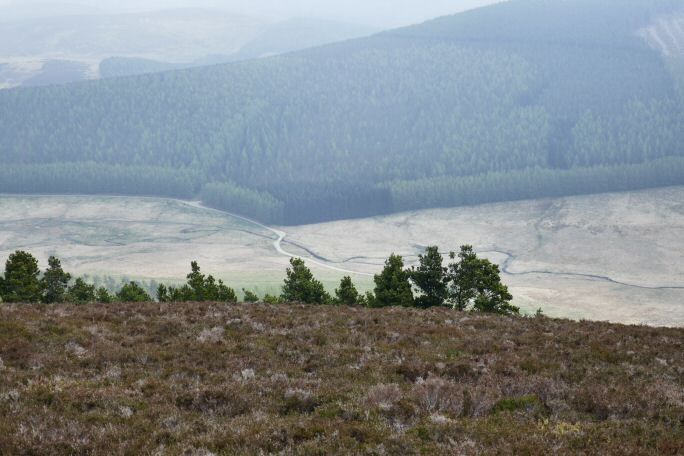 Looking down at the remaining bridge over the Newton Burn

After my stop I headed straight downhill towards Hare Cairn and discovered the stratum of dead trees and brashings reported by superstar_tradesman. I had thought of going through the forest on one side or the other, but on poking my head into it I changed my mind and set off down through the tangled timber. On my way through Through and looking back

It wasn't as difficult as it had looked at first sight, and took me about five minutes to zigzag down over and through it to the clearer hillside below. 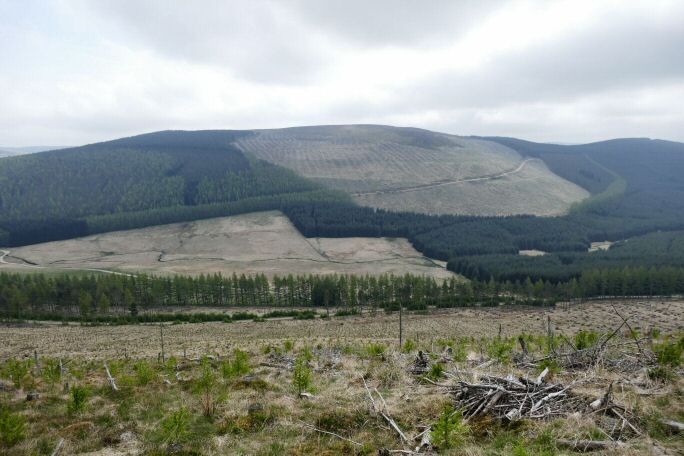 From there it was an easy walk down through fresh plantings to first cross the track from Freuchie and then reach the Newton Burn. Warned by wjshaw2r's WH report that the footbridge was no more, I did think about heading upstream to the remaining bridge. Since it had been dry for some time, however, I thought the stream would be low and an easy crossing might have appeared. In fact there was one spot where a running jump of a couple of metres would land on a large boulder jutting out from the other bank, but not far upstream I choose instead a line of rocks partly covered in slippery weed and partly submerged. 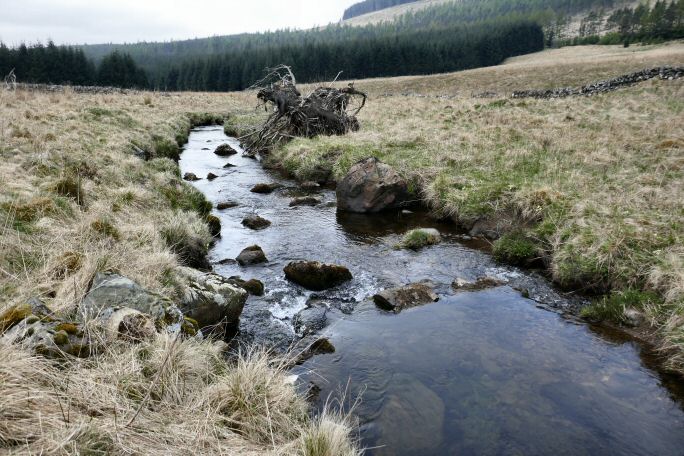 With care they gave a reasonably easy crossing. I headed for the wall to my right and followed it and the fence to a short climb up to the forest road running south round Hare Cairn. 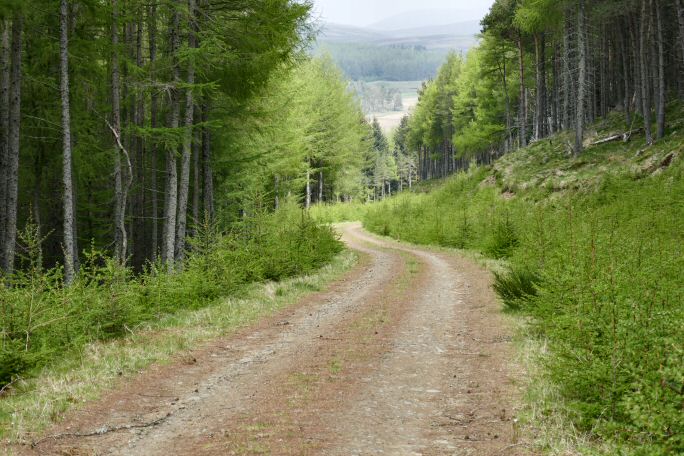 The forest road on the west of Hare Cairn

This quickly reached the felled area I'd seen from Crock and a rising traverse dodging stumps and brashings took me to another heather-clad summit area and trig point. 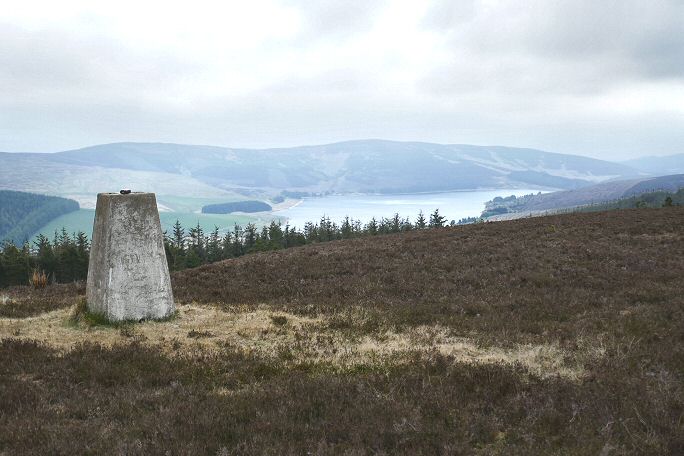 Backwater Reservoir and Creigh Hill from the summit of Hare Cairn 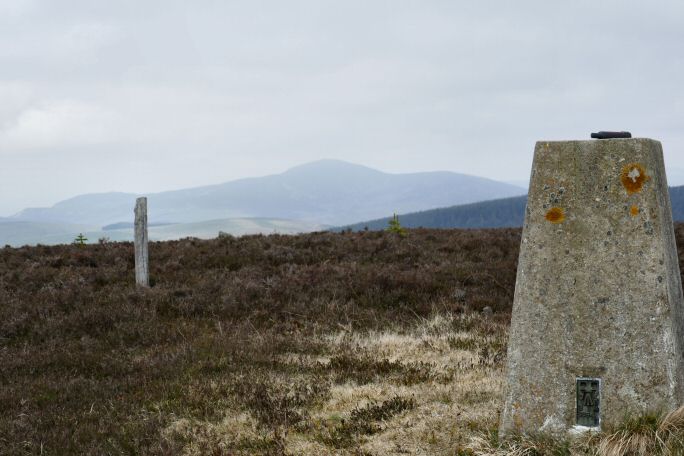 On the way back I found and followed what had possibly been a path through the forest before it was felled. It wasn't any better than the route I'd taken on the way up. I retraced my steps to the burn, recrossed it, and set off down the track to my start point arriving there after a total of about three and a quarter hours. 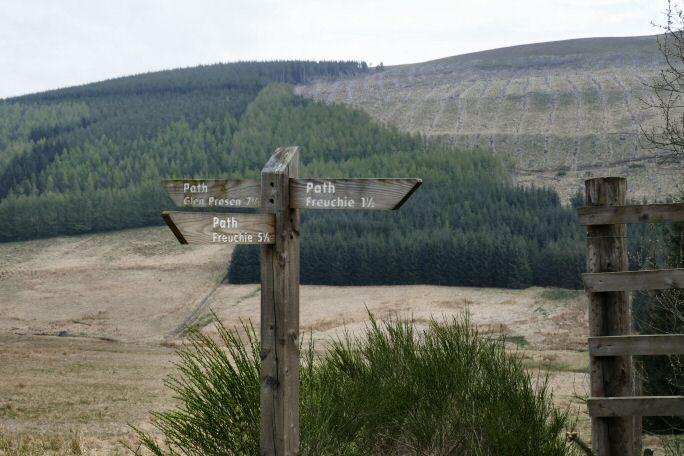 Back on the road to Freuchie

The day had been easier than expected, but the terrain could hardly be described as attractive!

Re: Crock and Hare without the forest

I was there with superstar_tradesman on Crock and laughed at his efforts in the forest. The snow made that section of fallen timber particularly tricky, but as you say it doesn't last long.