Forecast looked good for a dry week - little I know just how dry!

On the ferry from Ardrossan to Brodick, due to arrive at about 2pm, I was looking up at Goatfell and planning my journey. 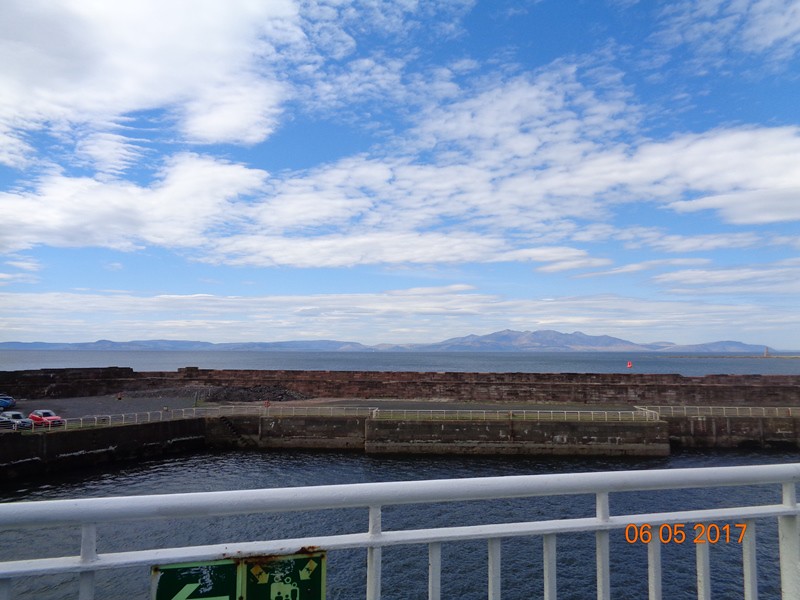 My aim that day was to get above the treeline and set up camp so as to not have to carry my full pack to the summit. Then first thing Sunday, do Goatfell and descend to 'decamp' and carry on. The cards fell a little differently!

Straight from the ferry, I hit the fish and chips

My last real food before I started on the trail. I sat and watched the ferry leave while I stuffed my face. 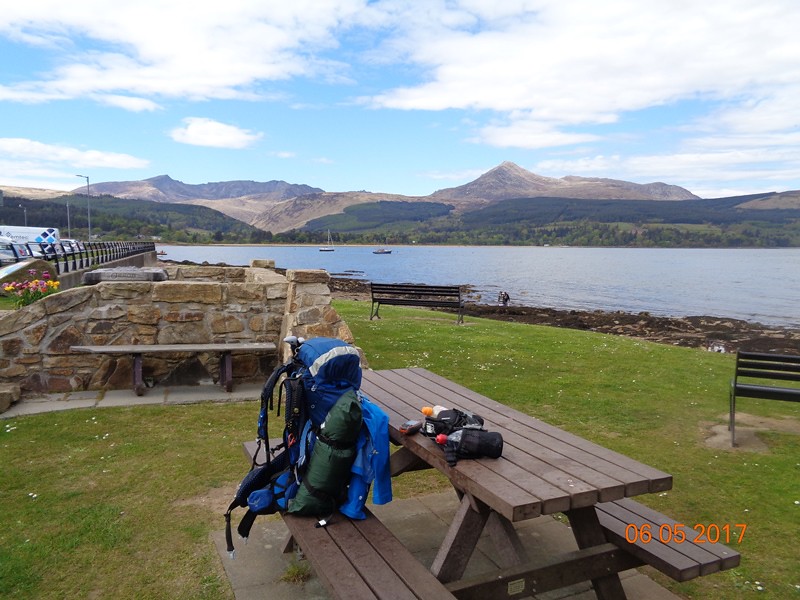 At about half 2 I set off for Goatfell. With the sun shining I found it very busy. As I hit the upper treeline I was passing people and could see people all the way up. I decided it too busy and too early to set up camp so I cracked on. So much for my plans, I ended up doing Goatfell in my full pack. 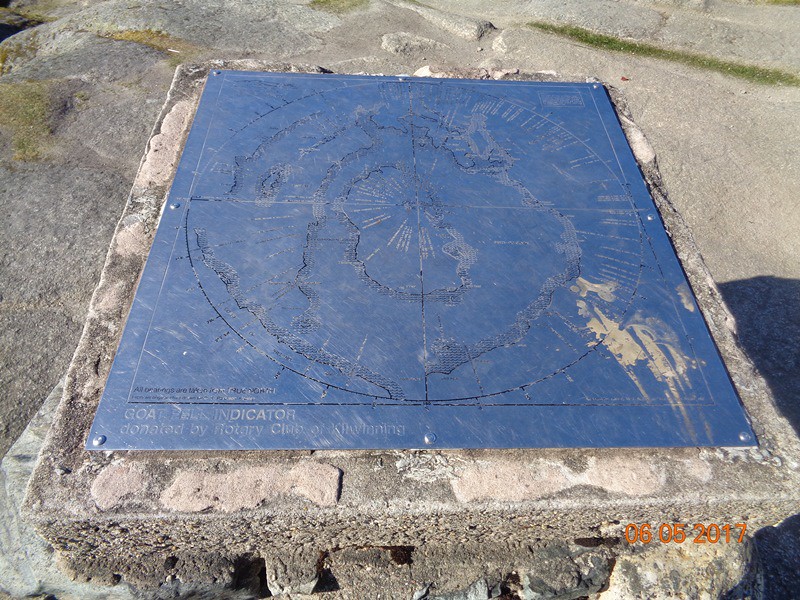 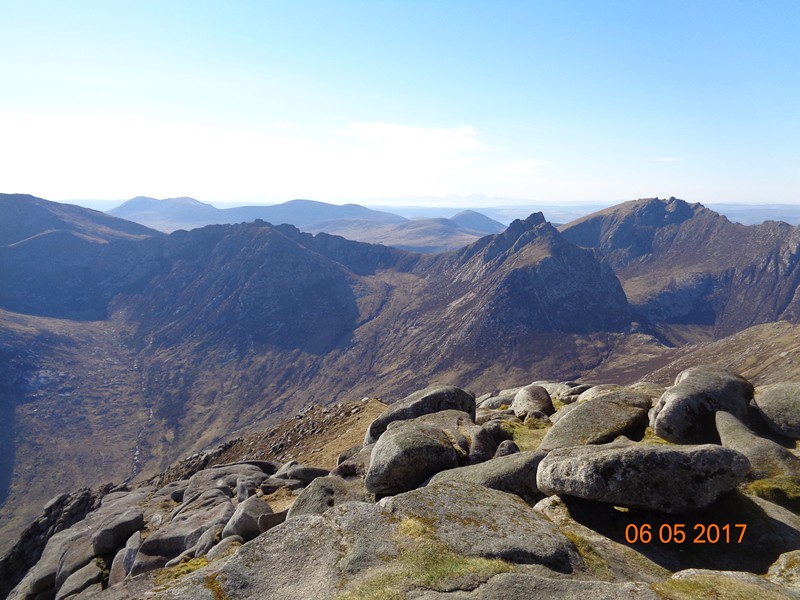 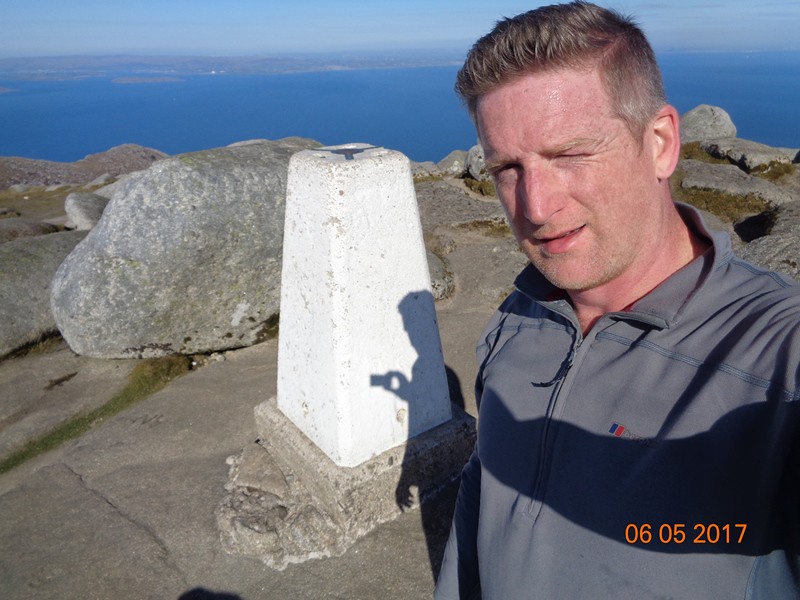 On descent I made it back down to High Corrie where I found a flat spot to camp having covered about 7-8 miles. 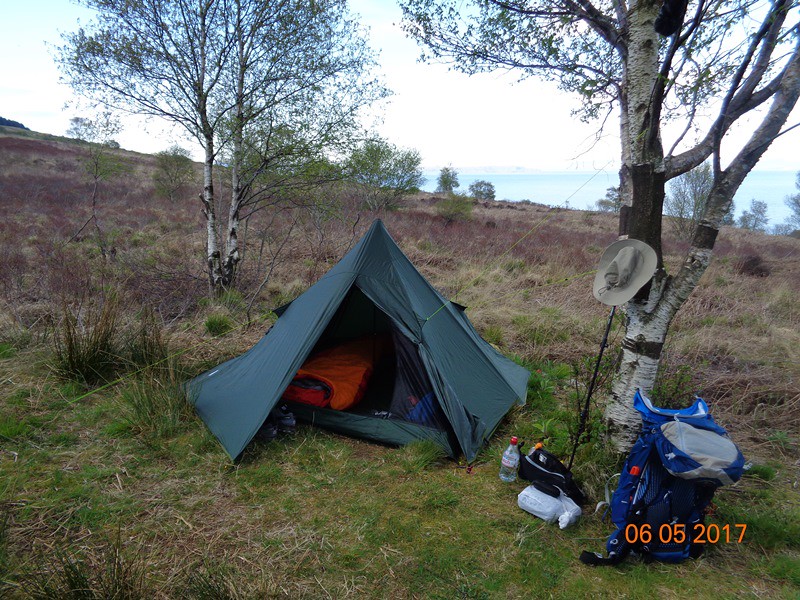 Sunday morning I was up and away by 7am. A few midge about while packing up.
I past through Corrie and then Sannox following the road. Not much after Sannox turning off and following the coastline. 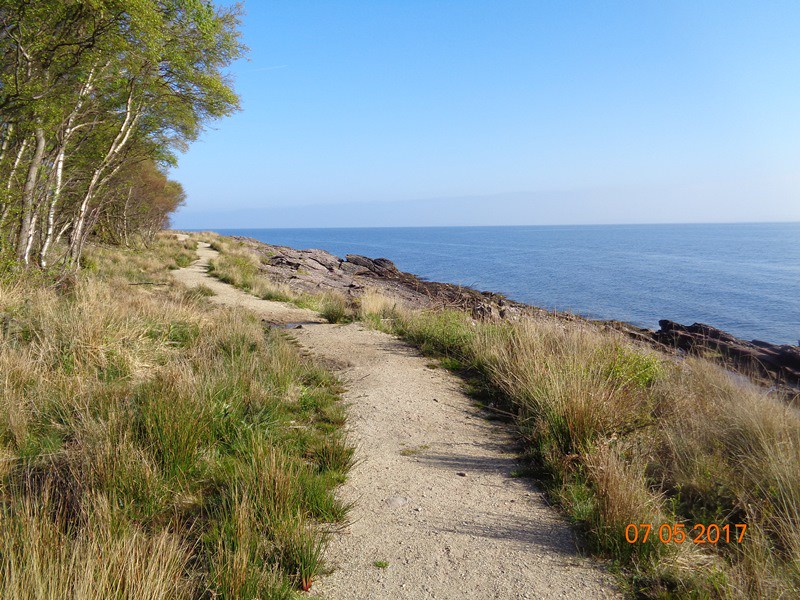 It's a nice path along the shore eventually passing Laggan Cottage. 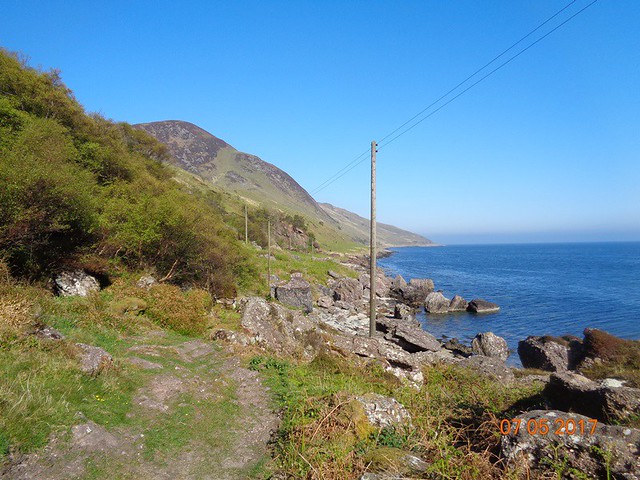 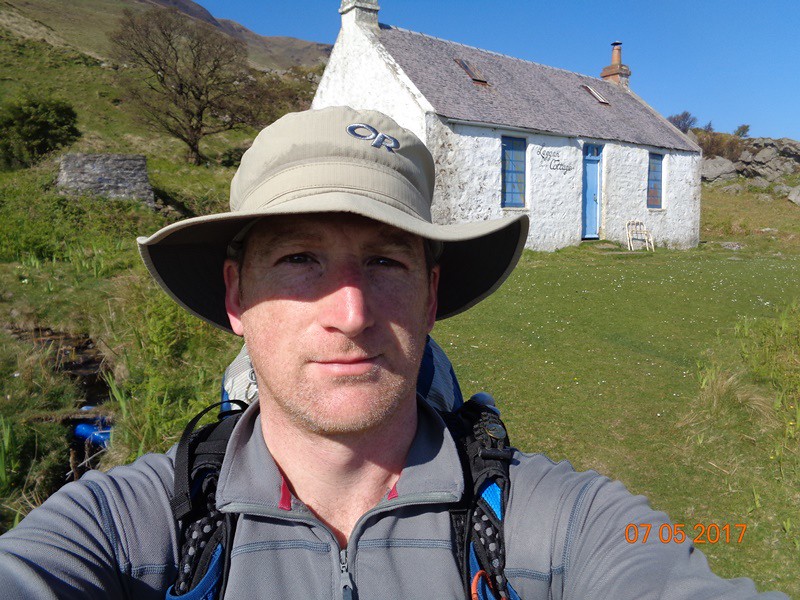 Round the point and into Lochranza. 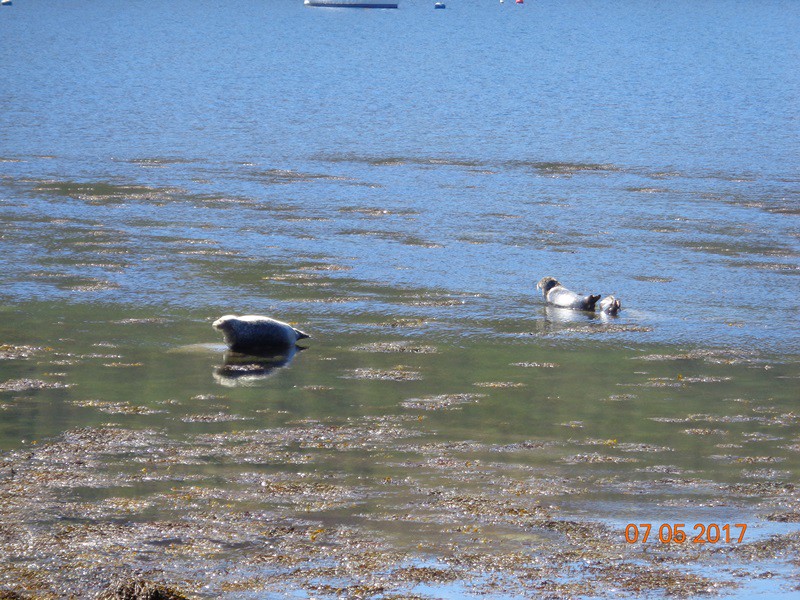 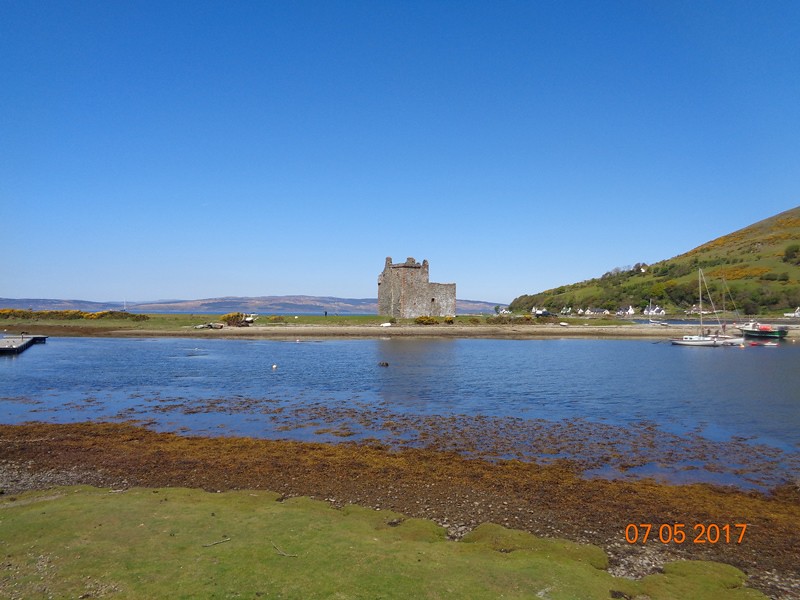 Lochranza I found to be a stunning little village. A haven for seals and their pups. I stopped at a cracking little sandwich bar opposite the ferry dock.
Because of the draw of the sandwich bar, I ended up missing the turn for the ACW which heads up inland slightly away from the road. I just ended up following the road/shore through Catacol and then Pirnmill, eventually setting up camp on the shore near Whitefarland where the ACW route again takes you away from the road. I'd covered slightly over 20 miles. 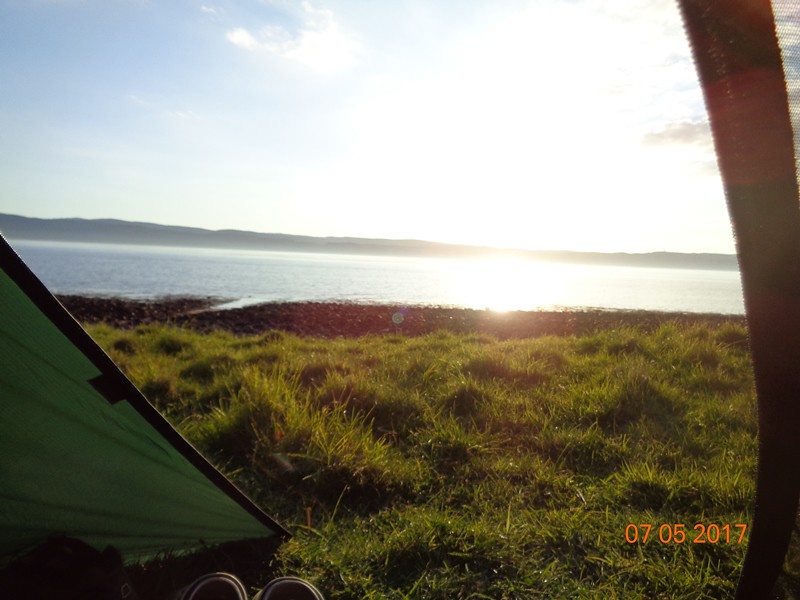 Bright and breezy the next morning I was off, once again joining the road at Imachar. I followed this through Dougarie and the junction near Machrie, eventually turning off at the parking area for the Kings Cave. 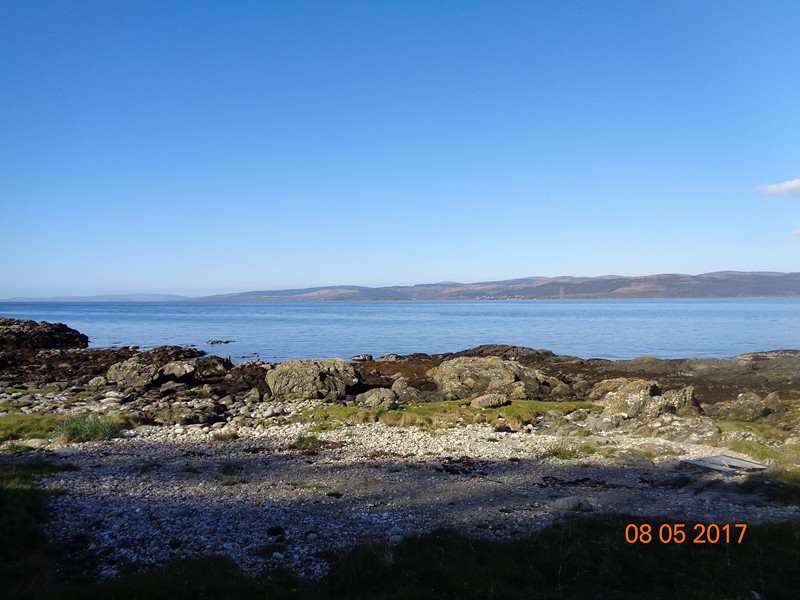 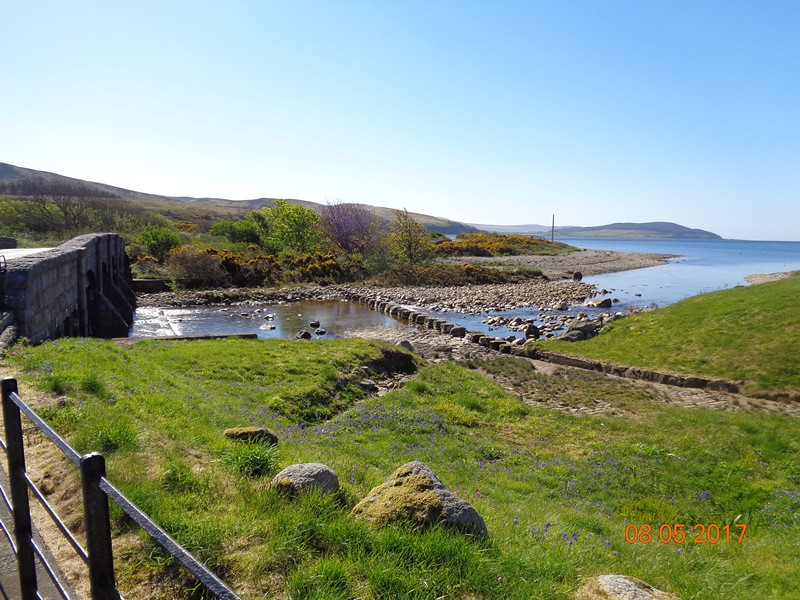 The path ascends quite steeply for a way before giving you a cracking view looking north over the island. 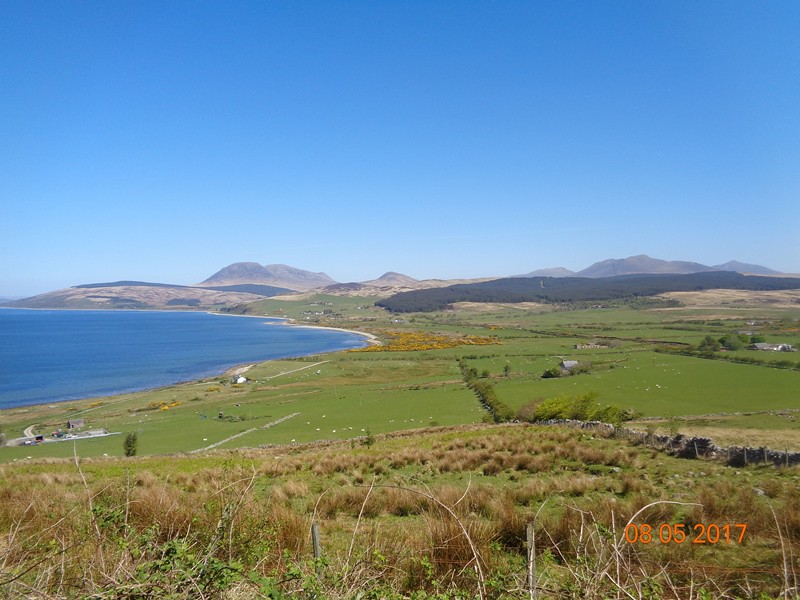 With the sun beaming, I almost stood on an Adder sun bathing on the middle of the trail. Too busy watching the flat calm sea for Basking Sharks 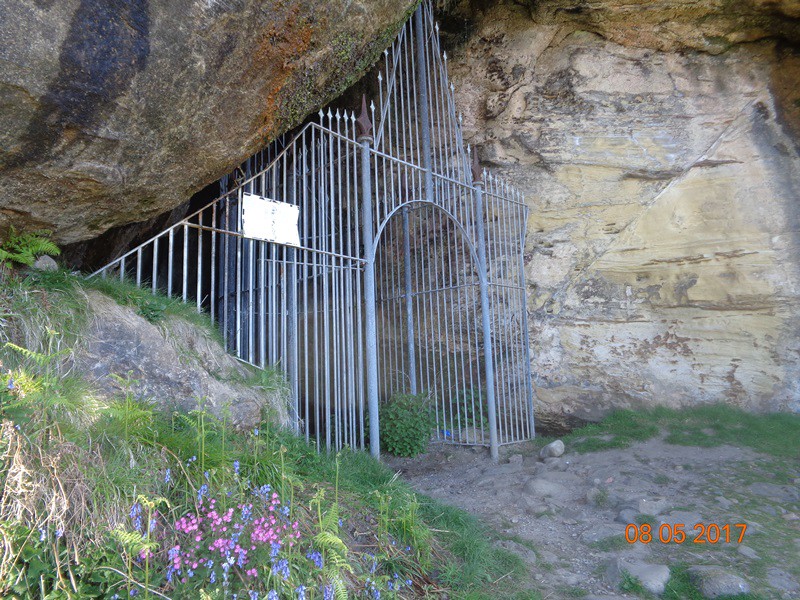 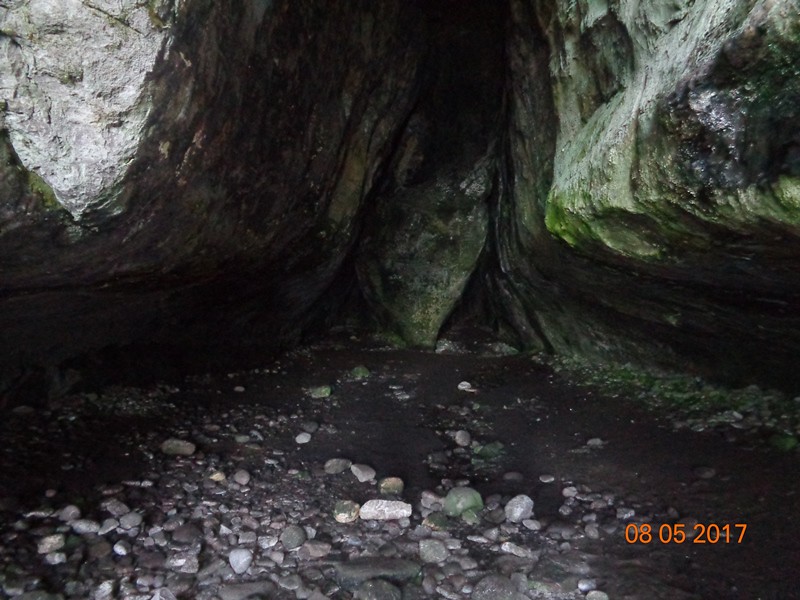 Once past the Kings Cave I followed the path past Drumadoon Point and round to Blackwaterfoot where I sat in the shade, outside the shop, drinking coffee and eating obscene amounts of chocolate. 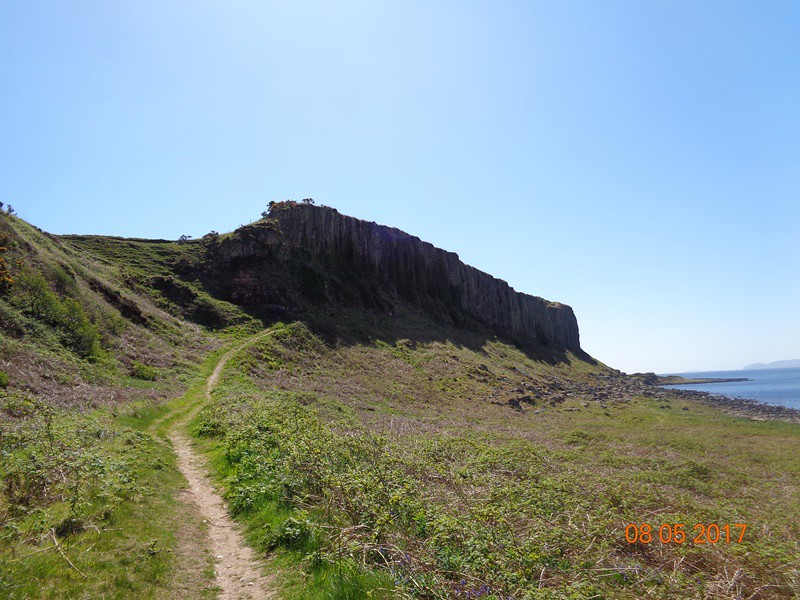 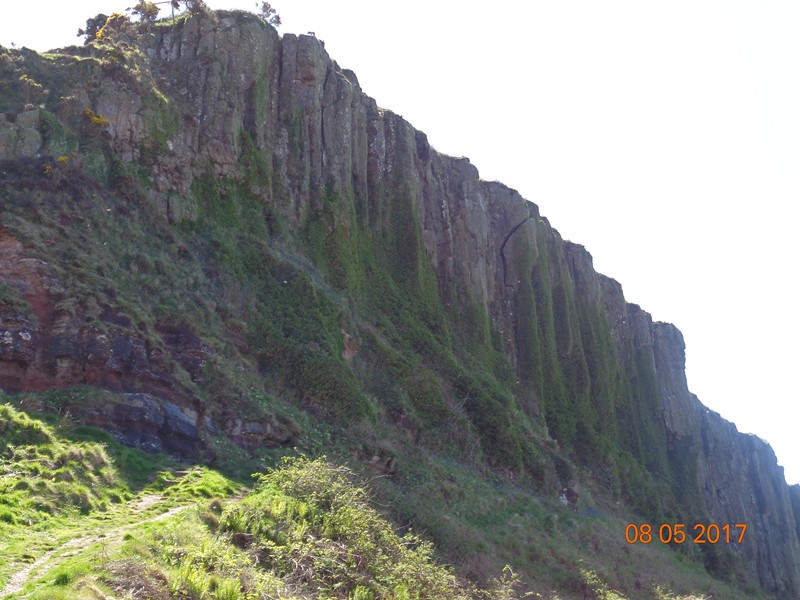 Once on the trail again, I followed the path along the coastline.

The guide book I was following, shows the route following the coastline all the way round until you cut up to a place called Sliddery.
In actual fact, the ACW signs follow the coast until they bring you up to the road via some steep planked steps well before Corriecravie. You then have to follow the road through an awful section of twists and turns. Surprising reroute considering how dangerous that section of road is to a hiker!

Once back on the road, I followed it to Lagg where I briefly stopped at the hotel for an Iron Bru and some nuts. Also filling my water bottles.
Energy levels refilled, I set off intending to camp once I was back on the shoreline, which I knew I turn for not long after the hotel.
Reaching the shoreline I noticed the tide was well down which was the opportune time to get passed the Black Cave. 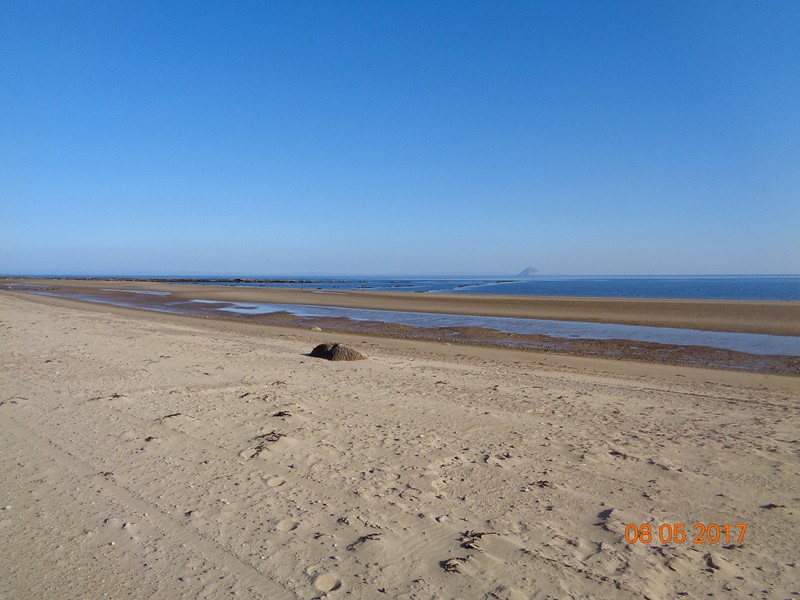 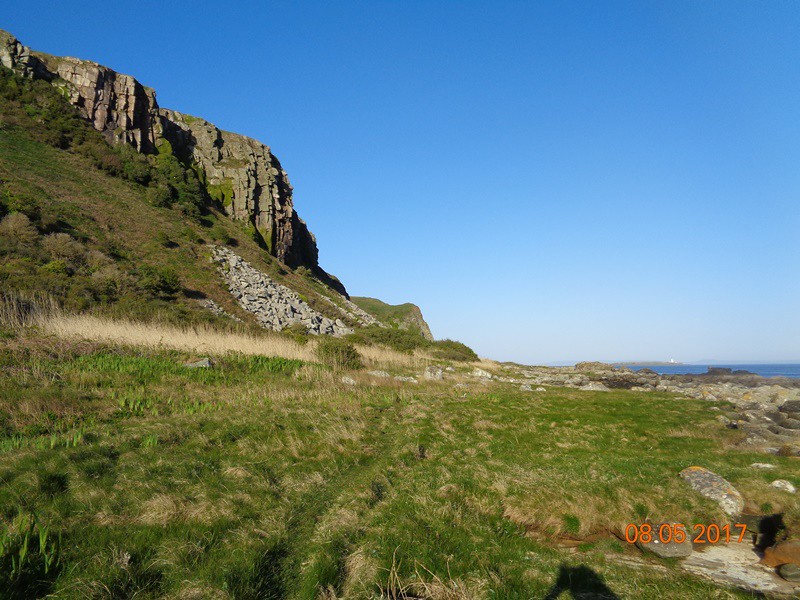 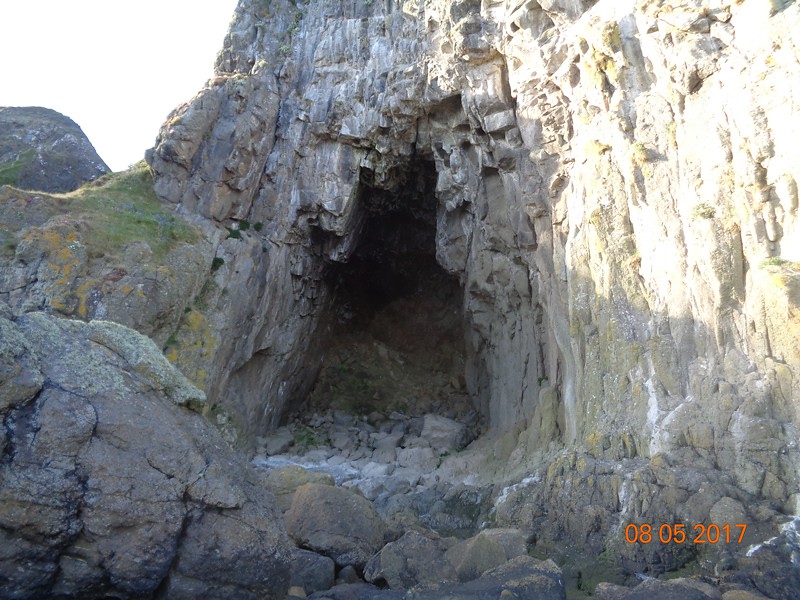 Head down and with sore feet by this point, I pushed on. Unfortunately, I didn't realise there would be absolutely nowhere to camp until you hit the outskirts of Kildonan. I eventually got there about 8pm and instantly crashed into my tent having done over 20 miles again.

The next morning I was up feeling better than expected and, looking at the map, knew I could make it back to Brodick that day. 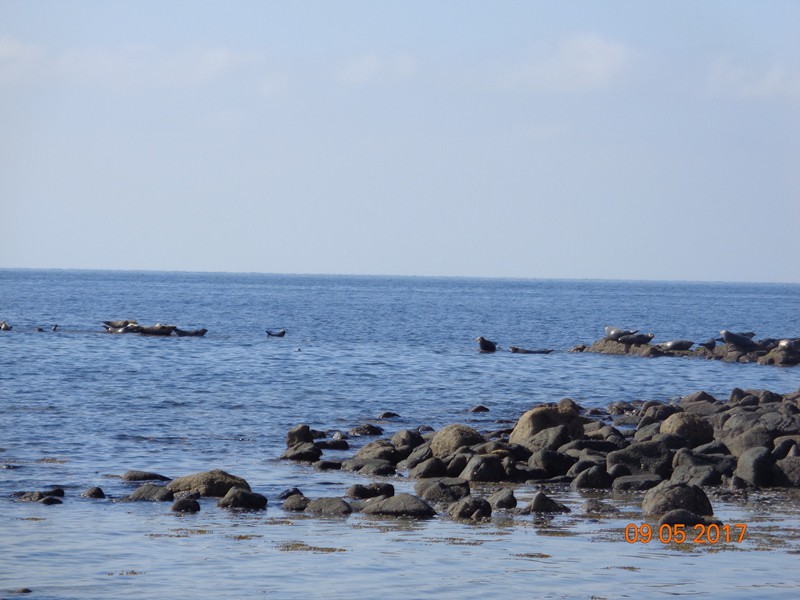 Pushing on I followed the coast to Whiting Bay, Lamlash (which is a stunning little natural harbour - not as nice as Lochranza though) and eventually Brodick and the ferry home.

I've titled the report The Desert of Arran due to fact I was well caught out with the weather and the surprising lack of water. A few times on the walk, I ran out of water and had to keep plodding on until I found some I could safely drink after filtering. To fair though, I was putting the water away considering the sun. A lot of the streams were dried up and there is long stretches between rivers.

Arran is a cracking little island and well worth a visit. If you choose to do the ACW though, be prepared for a lot of road walking (not my cup of tea hence the distances).

It's nice to read about routes that are not in mountains, and Arran is surely a great place. Coastal walks can be absolutely fantastic. Mind you, I'm chronically allergic to walking on roads, so if I were to do it (and I'm looking to do some multi-day routes when I retire, I would probably look for an alternative parallel route off road.)

Ironic about the water: I like ridge routes, where there's also never any water! Too high there are no springs, too low and one can't trust the water purity!

looks like an amazing route with fantastic views. Just catching the bug so hopefully I will be doing the same soon.
Great report and made me want to go there.

Nice report Willsdad, I did The Arran way Tuesday 25th to Fri 28th April this year and found exactly the same water shortages as you and camping spots on the west side especially hard to come by, which necessitated some big long walks, like you, I found the waymarking to be a bit haphazard but it kinda adds to the rough and ready nature of the walk. Iain

Yeah on reflection and with hindsight, I'd carry more water and take it a bit slower. It seemed a shame to be slogging late into the evening just to find water. I would have liked to have camped near a few of the villages and maybe had a pint n a wee dram.....when in Rome

To be fair, I do tend to aim for the hills where water isn't an issue. I was surprised and a little caught out by the lack of it.

A good report ,thanks. I recently did the ACP. It is a fine walk. I didn't do much road walking. You need to know the tides in the odd area. Goat Fell is a beast in the wind. Each day but one I used the bus to travel away from Berlingo micro-camper and walked back to it. I had water in that but did make some tea once with some brackish water. Lochranza (deer close by) and Lamlash my favourite places