On the trail of an ebay purchase

On the trail of an ebay purchase


Following several unsuccessful bidding attempts, a change of strategy resulted in our securing the winning bid in an auction on ebay. There were then just two main issues to resolve, ie (1) purchaser pick up only, due to the size and weight of the item and (2) said item was located in Newton Stewart. The first issue could be readily resolved through the use of an estate car. A plan was evolved with which to integrate the second issue.

Left the track at its high point then picked a way steeply up hill south towards White Hill.

A couple of aircraft flew down the glen – difficult to get a good shot. Think they were Hawks possibly from RAF Valley in Wales.

Levelled off higher up 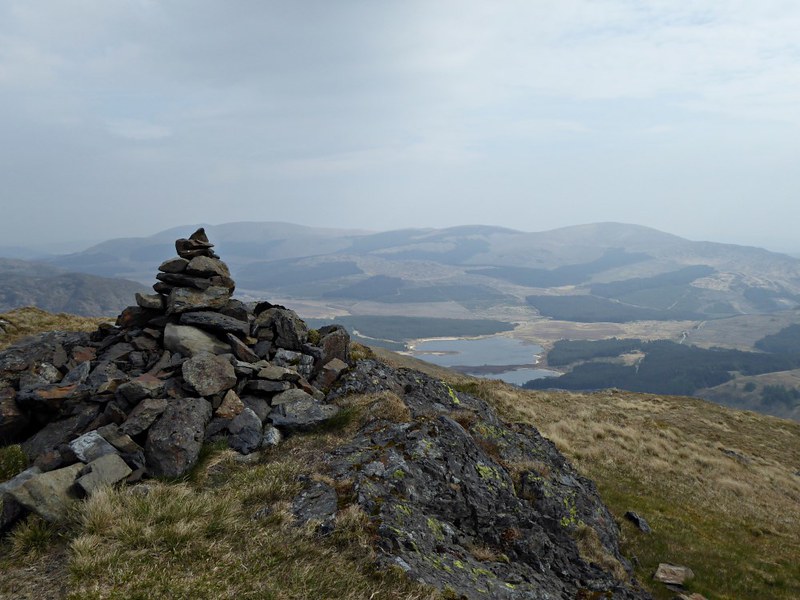 From the summit, headed south then east. Lost quite a lot of height before starting up again past the White Lochan. Saw a ruin which I decided to visit on the return leg.

Sunny and warm at the top so stopped for over half an hour for lunch and a break.

Set off back the same way – more height loss

Visited the ruin at the White Lochan

Heading down to the foot of Curleywee

Followed an old dyke up the hill to the bealach

Then WNW over the ridge and up to Lamachan Hill

Getting ever cloudier – wasn’t sure of the weather would hold. Set off SW towards Larg Hill.

From the summit of Larg Hill I could either return NW to the western end of Loch Trool and walk back along the loch or go northwards back up Lamachan Hill and more directly back to the car. Opted for the latter which although requiring more ascent would be shorter.

The last bit of the descent back down to the main track wasn’t overly pleasant and the rain came on for the last half hour of the return walk – not heavy enough to require waterproofs particularly given that it wasn’t cold.

Over the bridge then back up to the car park.

Saturday 13 May (early) - Cairnsmore of Fleet

Parked in the designated area at the start of the trail. Set off a little before 6am.

Not the most promising of starts – full waterproofs from the outset and conditions didn’t improve.

Then summit trig and shelter

Wind and rain so didn’t hang around for long – back down the same way. Back to car at 9am giving me time to prepare the car for the pick up.

Was a bit concerned as my feet, esp the balls of my feet, were getting sore again. Looked as though the metatarsalgia was starting to flare up but was hoping for the best. Texted home to say that the afternoon’s walk would be dependent on conditions.

The weather seemed to be brightening up and the rain had stopped. Pick up completed I drove back round to the car park at the end of Loch Trool. The rain had stopped, it was looking brighter and there was even a little sun. Definite case of being lulled into a false sense of security. Decided to go on the walk but to go anticlockwise thinking that I’d have the wind behind me for the ascents.

Started on the same track as the previous day before turning off and following a path upwards to the NE. Fairly boggy in places and not as good as I’d hoped.

Continued on to the first of the lochs.

Unfortunately the weather had closed in again – waterproofs back on as it was raining with a strong wind. Really wasn’t sure whether to continue at this point but decided to keep going.

Skirted to the left of the lochs before heading eastwards to start up Craignaw. Followed beside a stream up to a bealach just north of Craignaw then steeply southwards to the summit.

No views in the clag, wind and rain. Footered about a bit trying to see if I could find a more efficient way down but in the end descended more or less the same way as the ascent. Tried not to lose too much height before heading north to Dungeon Hill – at least I could see it.

But back in the clag at the top

Just one left. Descended northwards then straight up Mullwharchar. Clag again at the top.

I now had the long walk back to the car. One option was to drop down after Loch Enoch and cut over to the ascent path but this looked to be a longer option so decided just to head back over the Rig of Loch Enoch. This, however, required various sections with more ascent although shorter.

I’d guess on a good day this would be a very nice walk with views over to the lochs but not today. It was a case of getting on with it to get back to the car – now walking into the wind and rain. The balls of my feet felt like they were burning up, metatarsalgia back with a vengeance despite using special insoles. Have since arranged a podiatrist appointment to see if anything can be done.

There was a path for much of the way even if a little faint at times. Got round to the south of Buchan Hill then a bit of toing and froing trying to find a way down through the crags.

South West down to the path beside the Buchan Burn then the short walk back to the car. Met some people in the car park before getting ready and driving home.

A decent haul of Donalds/Grahams over 2 days there RH - and all thanks to winning an ebay bid!

Of the Glen Trool hills The Merrick is the only one I've been up so far, which I approached along the Rig of Loch Enoch for some strange reason. It looked better on the map than it turned out to be in reality. But all the same I was impressed by rocky wildness of these hills, which I thought almost Highland in character. Your excellent report has rather inspired me to do the rest of them; the subtle charms of the Donalds have definitely grown on me!

Hope the metatarsalgia clears up soon.

I also had an excuse to bag hills in Galloway at the weekend, as my brother got married in Gretna (near enough!) on the Friday. I had Corserine and the Rhinns of Kells planned for the Saturday, but just did Corserine in the end due to the conditions. I was planning Cairnsmore of Fleet for Sunday (so interesting to see your report), but settled for Criffel. Some sunshine on the way up, cloud on top so no views to speak of, then ran back down and drove straight back to London. Despite the rain on Saturday the hill path up Criffel was dry, which shows how little rain there must have been lately as I gather it's usually a bogfest. At least the sunshine held for the wedding.

dav2930 wrote:But all the same I was impressed by rocky wildness of these hills, which I thought almost Highland in character.

Phil the Hill wrote:I had Corserine and the Rhinns of Kells planned for the Saturday, but just did Corserine in the end due to the conditions. I was planning Cairnsmore of Fleet for Sunday... but settled for Criffel. .. At least the sunshine held for the wedding.

Enjoyed reading that descriptive report - I do, as you know have a vested interest in reading it

Our paths are bound to cross one of these days. My next Donald will be Moorbrock hopefully within the next couple of weeks.
I am at the planning stage of heading down to visit 6 of your haul. My plan is to visit them in two groups of 3, also contemplating staying overnight, as getting down to Glen Trool from the NE is a bit of a mare

Hope your foot problem gets better, not what you want if you are an avid walker

Fife Flyer wrote: I do, as you know have a vested interest in reading it

Our paths are bound to cross one of these days.

I don't tend to see many people at all on the hills these days probably as they're mostly corbetts, grahams or donalds - I've got close to some other WHers and missed by a day or so but maybe some day we'll meet - no doubt you'll be finished the donalds soon so all the best when it comes

Fife Flyer wrote: I am at the planning stage of heading down to visit 6 of your haul. My plan is to visit them in two groups of 3, also contemplating staying overnight, as getting down to Glen Trool from the NE is a bit of a mare

Hope your foot problem gets better, not what you want if you are an avid walker

Hope you get good weather especially for the north Glen Trool hills. Suspect I'm going to have to live with the feet issues but will be trying out some options next time - might need to shorten the routes though for a while - cheers