Millie returns on An Socach

Millie returns on An Socach


It was a return to the Munro's for almost-but-not-quite-retired Millie today! Millie on the way to her 21st Munro

She's 13 this year and while more challenging/longer walks are a bit much for her now, I thought this should be something she can easily tackle! And after my slow day yesterday, she certainly helped pick the pace up with us covering the distance in only 4 hours 45 minutes! Guess that's what two dog power does! The route is easy to follow along to a little cottage with four white highland ponies appearing to be the only residents. 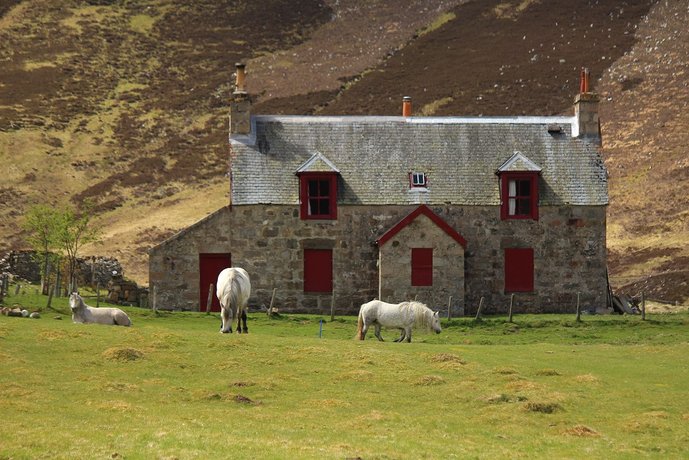 The fourth pony was just out of the picture!

Along to the ford, crossing water not my strong point but this as no problem as there was a "bridge" made of stones piled up just a bit upstream. Looked to me like it was made deliberately as a little crossing, especially with a few flat stones, but it could be accidental I suppose. Regardless, it was a very easy way to get across. Not that it would have been much difficulty today anyway, it is still dry as a bone! From there it is up and up and up to the most impressive cairn on the walk. Dogs were released and they ran straight for it, bet they were thinking that was the walk done! Nope, we were heading for the bigger hill in the background! The path lead to the base of a rocky, uphill path that was steep but easy enough going up, and then there was more to climb, and more...then there is a windshelter but the summit is still a fair bit away with a cairn and windshelter. We found grassy tracks away from the main track to follow, easier on feet an paws. The windshelter is the actual summit, but the sun was the wrong direction for photos with that so the cairn had to do for the photos! Plus the dogs don't recognise windshelters as something to get their photo taken with! Munro 19 for Moss, 21 for Millie, and 24 for me! From there it was turn around and head back the way we came, spotting a group of these on the way. Big bonus, first time I've seen Dotterel! Also spotted some ptarmigan, ring ouzel and nearly stood on this birdy on the way down! She was hiding on the path, the dogs had gone passed her (on the lead) but when I stepped next to her that was when she decided to jump up and make a run for it between us! I don't think I'd have even noticed her there if she hadn't moved! Then it was back to crossing the ford and following the track back. There was a huge herd of red deer on the side of the hill, I'd seen some peering round the side of An Socach on the way up so I'm guessing this is the same group otherwise there are two very big groups of deer up there. Further along the track we were greeted at the corner of a fenced field by the highland ponies we'd seen earlier, they leaned over the fence to say hello and get a stroke on the nose. Saying goodbye to the ponies who watched us continue on our way before returning to their grazing we were soon at the cottage and on the final stretch home. There had been a few cars parked there when I arrived, but mine was the only one left in the layby across the road. Then it was an easy drive home for steak pie! For me anyway, the dogs tucked into some duck!