Track_2017-05-17 153539.gpx Open full screen  NB: Walkhighlands is not responsible for the accuracy of gpx files in users posts

Having had a navigational error last time I was in Glen Tilt and bagging Carn a'Chlamain when I was aiming for Beinn Dearg, I headed back to the Glen Tilt car park, armed with a better sense of direction, for another Perthshire bike 'n' hike. This time I was accompanied by Mountain Mutt as I had been reliably informed there were no sheep on route and therefore there would be no land speed records set by a man on a mountain bike catapulted along by a sheep crazed Collie!

The start was exactly the same going up road from the car park, past the fields to the crossroads except this time I went straight across and immediately joined the wide trail through the forest, and immediately hit my first hill........ I think my legs were still suffering from my West Highland Way cycle as I had to get off and push the bike, not a good start.

Once up this I was faced with a choice, a bit of a "You take the high road and I'll take the low road" conundrum (I bet you are all singing that song in your heads now

) The trail went high and low. The low one was marked with a black arrow, the trial I was meant to follow. Handily both trails were marked on my map and the GPS went right in-between both......sigh..... I decided I really didn't want to lose any of the height I'd just gained so took the high road which turned out to be the right choice. A short climb and I was on the flat which was soon joined by the low road (up another steep hill) and I was faced with a large deer gate which signaled my entrance to the vast moorlands that were to be my surroundings for the next 4 hours.

The trail becomes a land rover track through the moors and it's not long before you start to feel very isolated and alone. 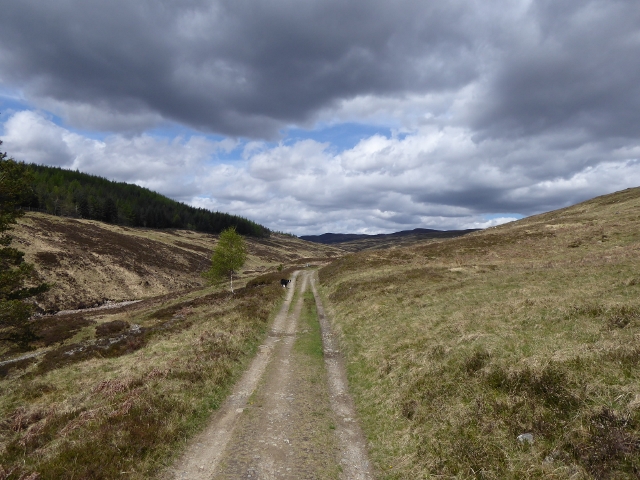 The trail into the wilderness

Once I negotiated a couple of corners I could see my target, Beinn Dearg, which was very far away! 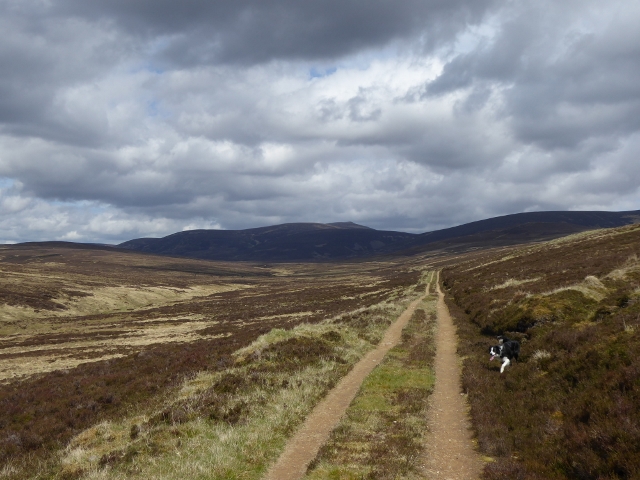 As this was Mountain Mutt's first bike 'n' hike my main concern was not to burn him out. He is absolutely amazing when he is going flat out next to the bike on short journeys; head down, ears back, huge stride totally focused on running as fast and as efficiently as he can. We regularly get over 30mph! I really need to video it some time soon. In his mind he has to be out front and any time I catch him up he finds another gear, digs in, and goes faster.

The recent WH meet in Kinlochleven was the first time I had ever seen him totally done in and it had played on my mind since. Plus if I delivered a broken dog back to the Wife I would, at the very least, get a cold shoulder for a good few days. Fortunately the cycle to Beinn Dearg is nothing like the one to Carn a'Chlamain. It's hilly as opposed to a nice flat cycle along a river and, from the GPS track I recorded, is predominately uphill. Add in that the track is very rough in places and I averaged 6.1mph, a mere trot for a Collie.

It's an amazing landscape to be in. Still quite brown and barren with no signs of life, not even deer, but the feeling of isolation is great. Plus if I turned round now and again the views to the West were expansive. Took me just under an hour to cycle to the Bothy which appears after a decent, but rough, downhill section. 5.9 miles of cycling. I could have cycled beyond the Bothy as the track continues uphill to where the WH GPS shows a split in the path but my lower back, being the meeting point between the upwards rebounds of my back wheel and the downward pull of my pack was screaming for me to get off the bike, so I ditched it at the Bothy and continued on foot. 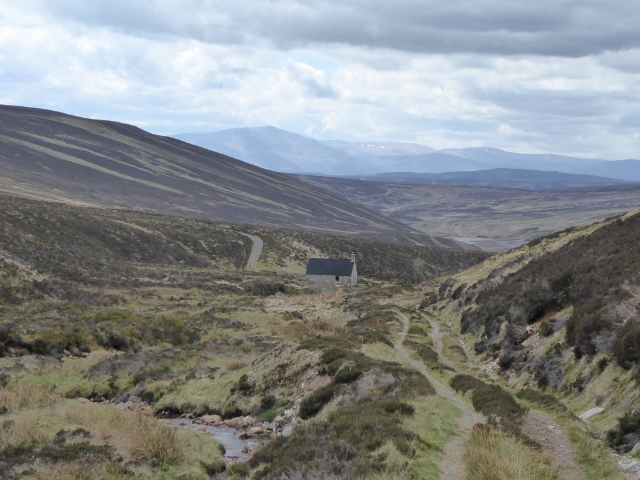 Looking back to the bothy as I walked uphill

The track follows the Allt Sheicheachan all the way until I ended up in a kind of basin between 3 hills. This is the split in the WH route. The alternative route to the car park is across the Allt, the path to the summit goes off to the left. It's a stalkers path and is in great condition and easy to follow as it zig zags up the slope. 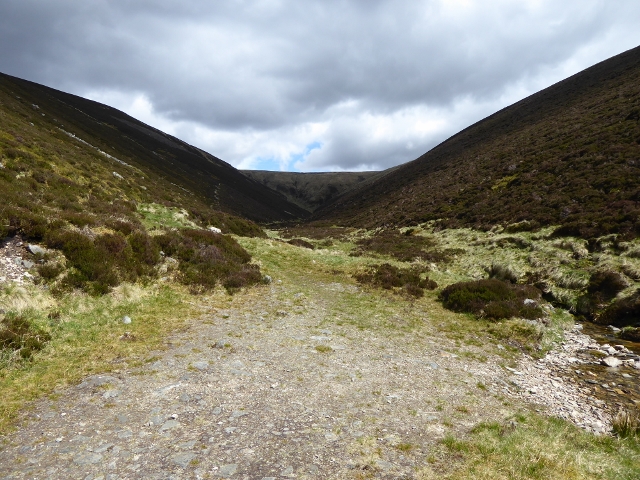 The junction in the basin 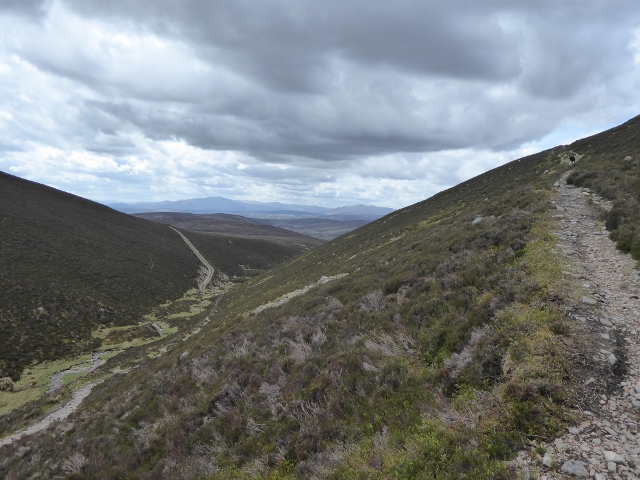 It's really not a complicated walk. This path plonked me onto the typical Cairngormy plateau where the summit still looked a fair distance away. 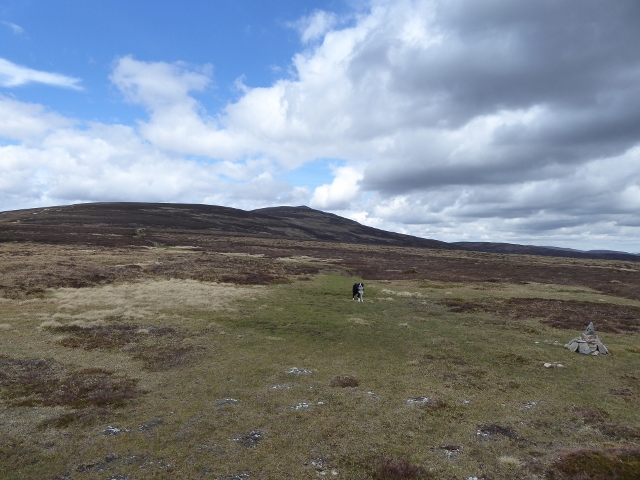 I wasn't minding this at all. It was nice, easy walking on soft ground. There were a couple of boggy bits that needed hurdled (a quick pole test showed this was still rather deep and soggy despite the recent dry spell) and it was gently heading uphill. It was noticeably colder though. I'd been too warm lower down with my compression top under my t-shirt but just couldn't be bothered faffing about getting changed. Up here I was glad I hadn't, I was just comfortable as long as I kept moving.

It didn't take too long for the summit to start getting closer and the ground changed to fine sandstone grit before the final pull to the summit is through a grey and pink sandstone boulder field. 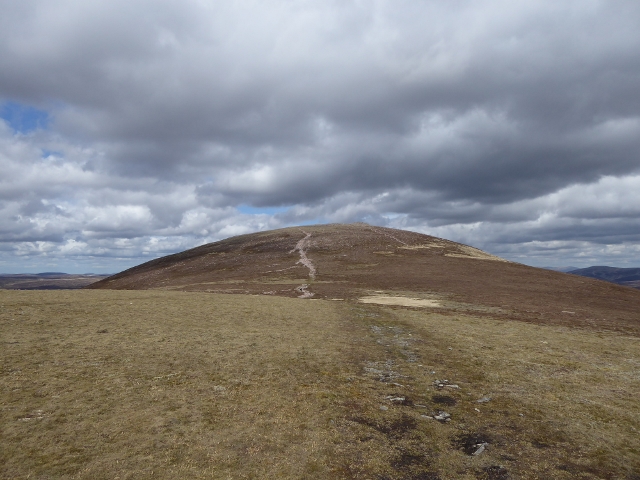 Final path to the summit

I took about an hour and 10 mins to hike to the summit. The wind had picked up but there is a great wind shelter round the cairn. The cloud was totally clear of the summits so I snapped away before ducking down for some shelter to have lunch. 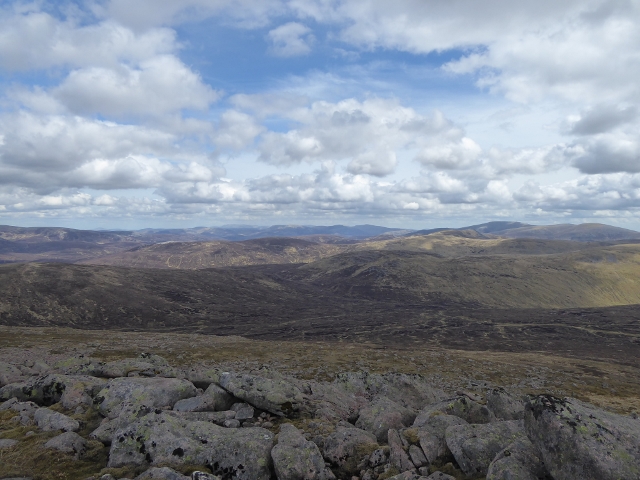 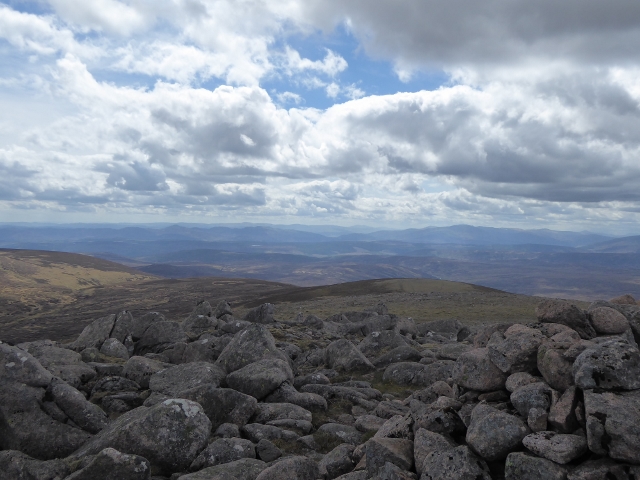 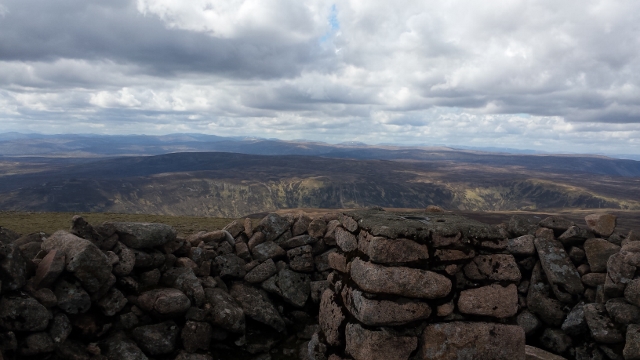 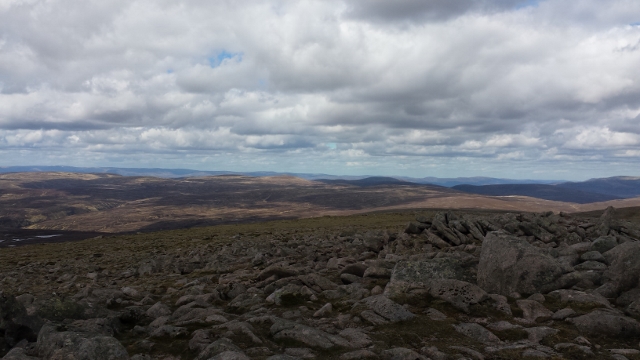 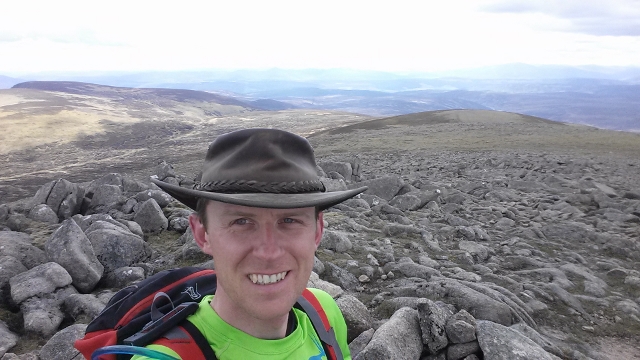 The hat is back! 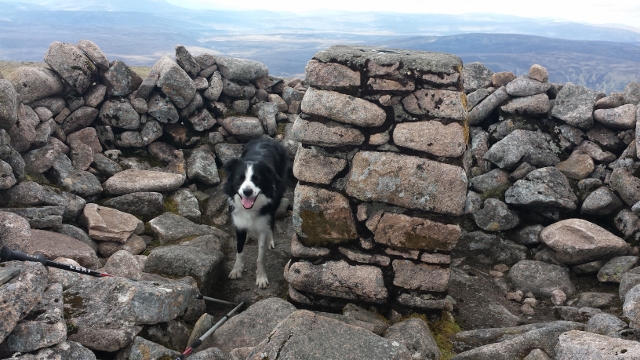 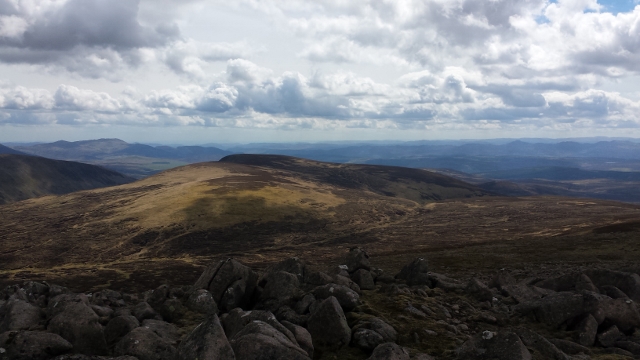 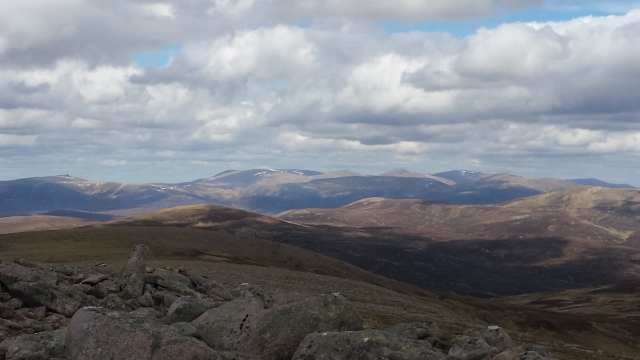 Once we'd both had some lunch it was a case of retracing our steps back to the bothy to get the bike so this ended up an out and back trip. 2 hrs 15mins hiking.

What I hadn't expected was to actually see some Land Rovers on the Land Rover trail. Somehow, as I was getting ready to get back on the bike, they managed to sneak up on me coming down the hill too. I've no idea where they came from as I hadn't seen them when I was up high. I was quite surprised after 3 hours of isolation.

) I freewheeled most of the way back to the car park. Couldn't go flat out as Mountain Mutt wasn't liking the stony surface for running fast on, especially the sections of loose stone. I stopped as often as I could to get him into streams as it was once again warm and he was working hard. He also has a habit of cutting right across the front of the bike to find softer ground, an annoying habit!!!!!

The last time I was in Glen Tilt I was treated to some impressive low level flying by the nutters of the RAF. I'd not even heard a fighter plane all afternoon. They were clearly leaving the best till last. As I drove down the hill out of Old Bridge of Tilt I heard the whine of a low flying aircraft. Thinking it was the usual Tornado or Eurofighter, imagine my surprise and awe when a Hercules C-130 dived over me, banked left and buzzed me and the village at no more than 200m. It was fricken awesome!!!!!!!!

I was so mesmerised by the spectacle that I totally forgot to grab the camera for a photo. Some things are just better seen with your eyes rather than through a lens.

Do you mean actually reaching either of these summits on your bike?

Hi Dritchie87
I was up there two weeks ago, cycled in past the rifle range and out past the bothy. I'd say the rifle range path is the better path to cycle in. Which ever way you go you you can hit the 600m contour line before dumping your bike leaving you a short 3km walk to the top.

On Carn a'Chlamain there is a land rover track all the way to the top although after you pass Marble Lodge and start up the hill it is steep and rough ( I walked up from there ).

It will also depend what your bike is like. It needs to be a atb for beinn deatg, it is too rough for anything else.

Nice report - and some good photos

I did both of those on foot. Both are long days, especially Chlamain

It will also depend what your bike is like. It needs to be a atb for beinn deatg, it is too rough for anything else.

I did it on a non mtb last year. Was fine.

By solely do you mean right to the summit? If so I would say no though I have seen a guy at the summit of Beinn Dearg with a bike

.I went up to just past the bothy on Beinn Dearg with a mountain bike and a non suspension bike. With no suspension you need to keep the speed down on the long downhill on the way out if you want to keep your teeth inside your heid.
On Carn a Chlamain I would suggest ditching the bike where you leave the main track.