Woke up today feeling the need to get out on the hills, but where? I decided to stick the bike in the car and head for Glen Affric. Nothing too imaginative here - both previous times that I've been up A' Chralaig and Mullach Fraoch-choire have been from Glen Affric as well, but I hadn't been up A' Chioch before.


Map.gpx Open full screen  NB: Walkhighlands is not responsible for the accuracy of gpx files in users posts
On the bike shortly after 11 leaving the almost full car park at the head of the road. There were light spits of rain and it was a bit greyer than I'd hoped for, but it's always nice to be out in Glen Affric. It took me around 45 minutes to cycle beyond Athnamulloch and to the end of the track in Gleann na Ciche.

Loch Affric and An Tudair: 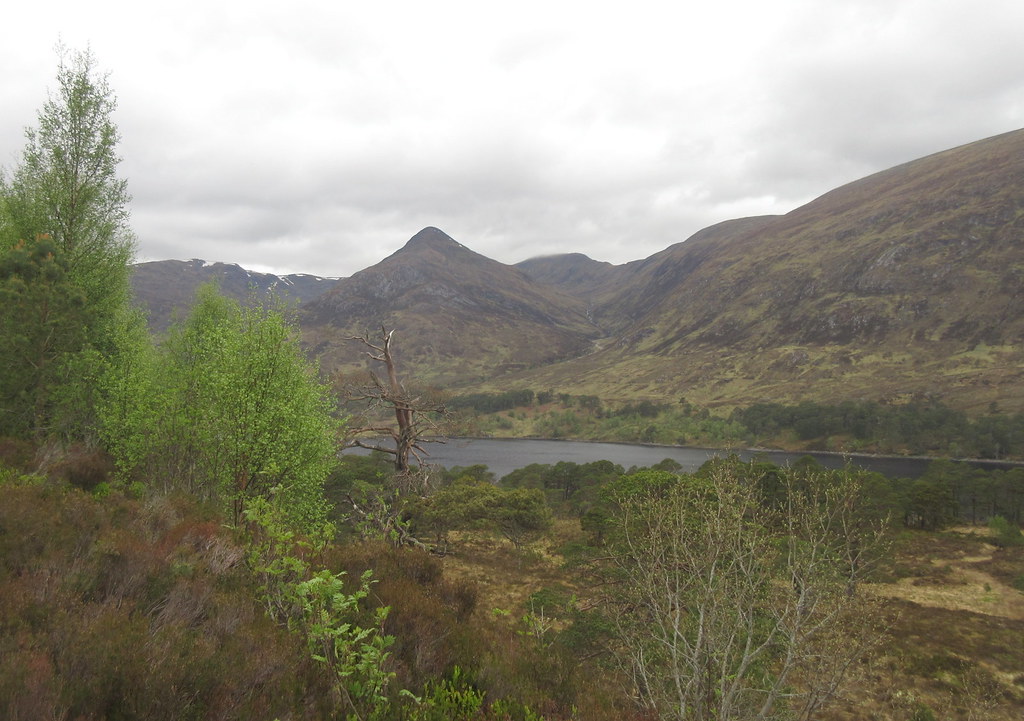 An Tudair across the end of Loch Affric: 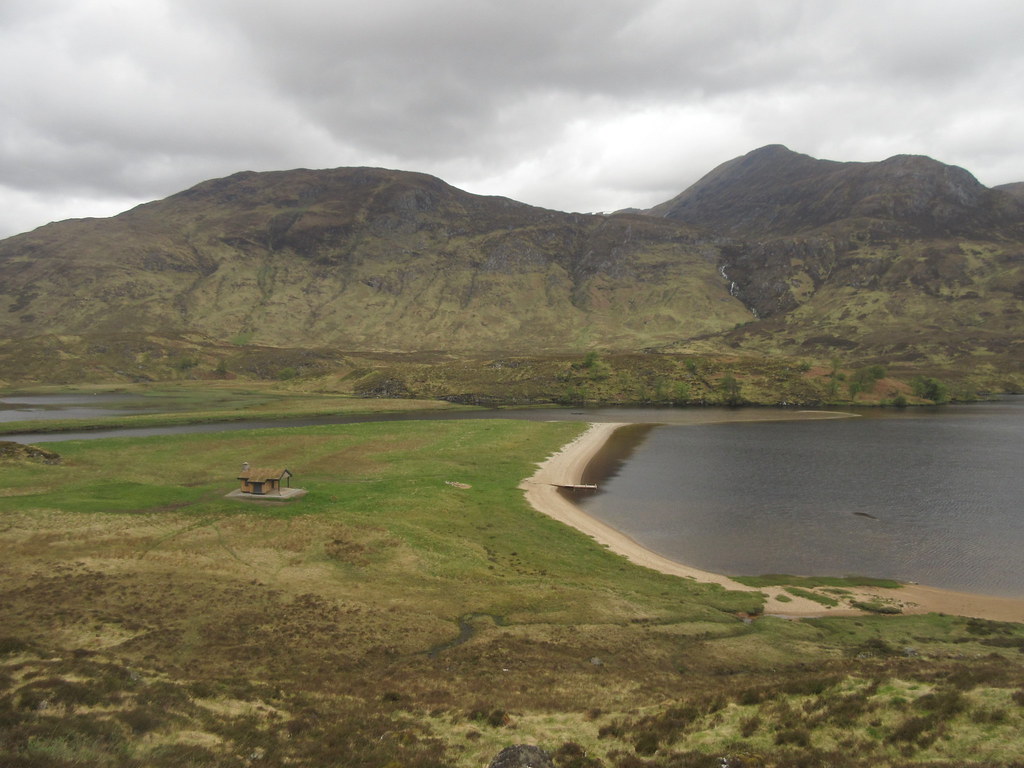 Comparison photo from earlier in the year - water level in Feb 2017: 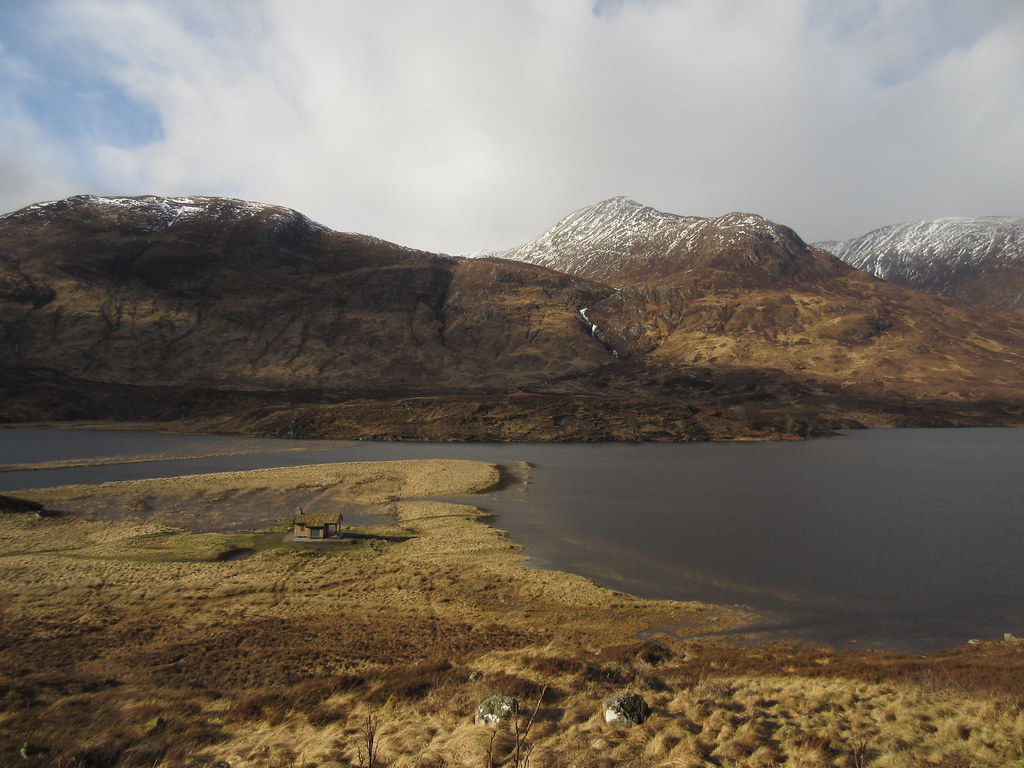 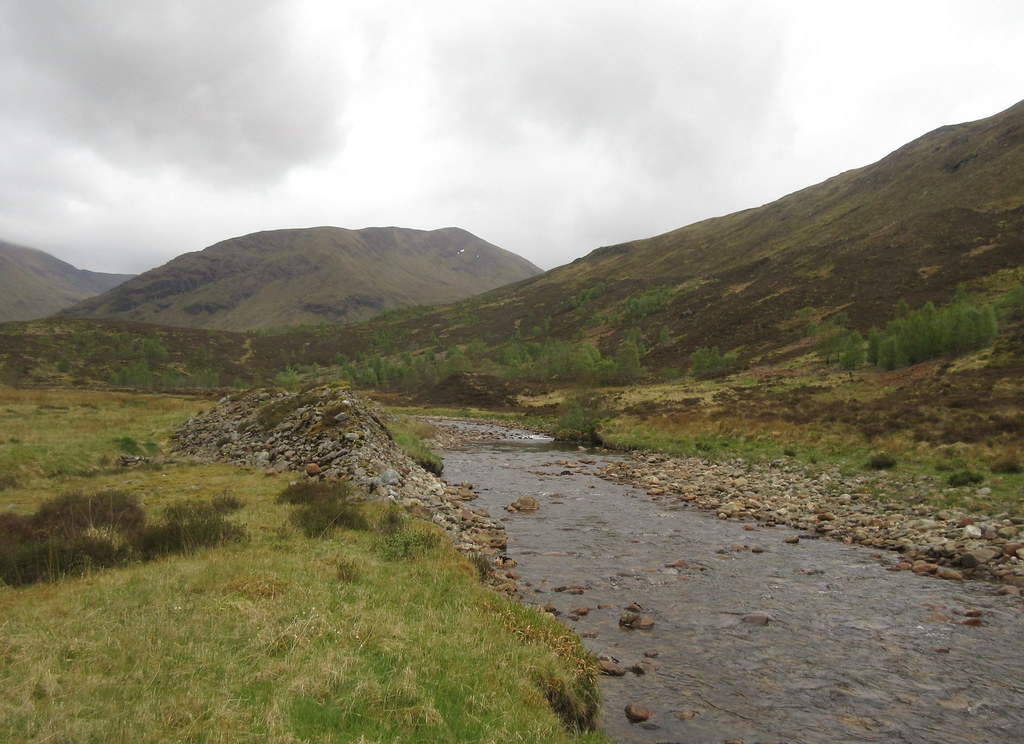 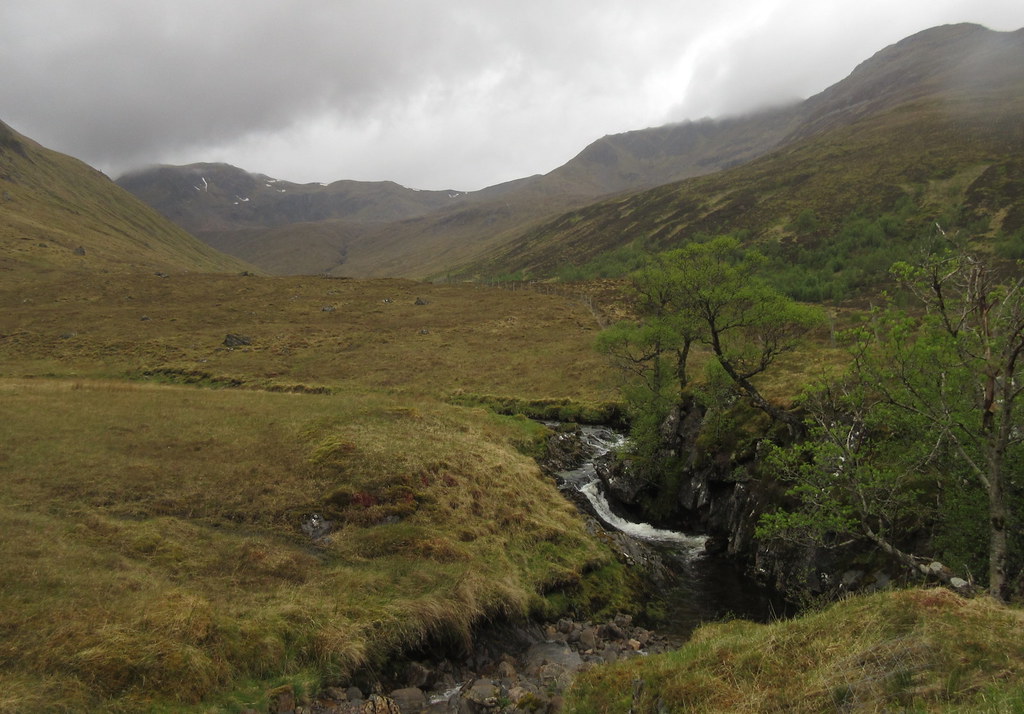 I followed the path further up the glen for another 45 minutes or so (slightly boggy in places where a quad bike had passed through), before crossing the river and striking up the east flank of A' Chioch. The going was steep, but quite reasonable underfoot. Higher up, the rain became more showery and the wind rose up. It wasn't really what I had been expecting, but I was up here now! Over on the pinnacles of the S ridge of Mullach Fraoch-choire, I could see a group of 20 or so making the traverse. For a big group, they moved quite fast, and despite expecting to meet them on A' Chralaig, I never saw them again. 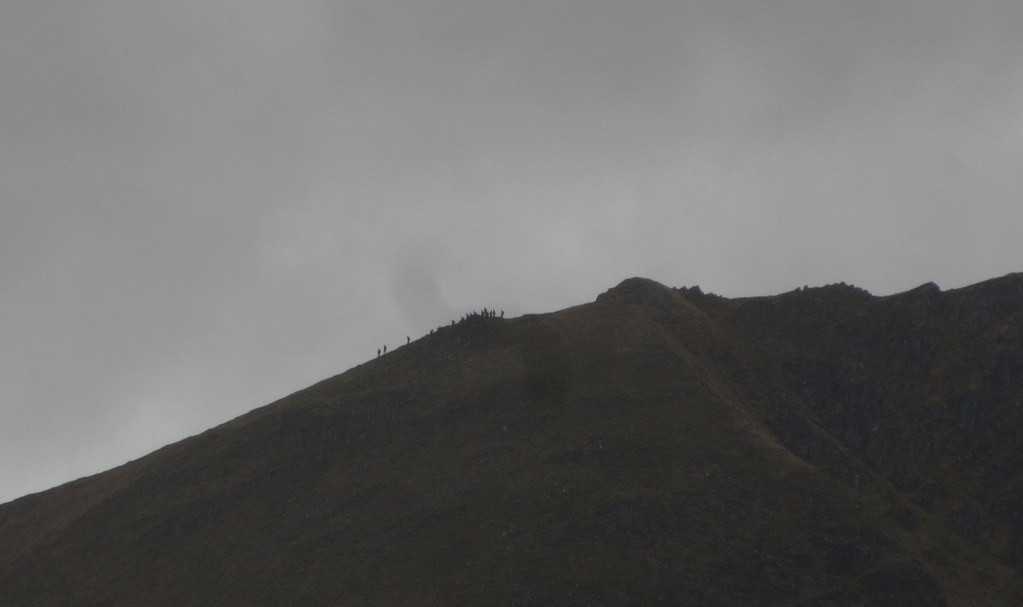 Before that, the ridge of A' Chioch made a pleasant wander. This would be nice in good winter conditions - narrow, but not that narrow. 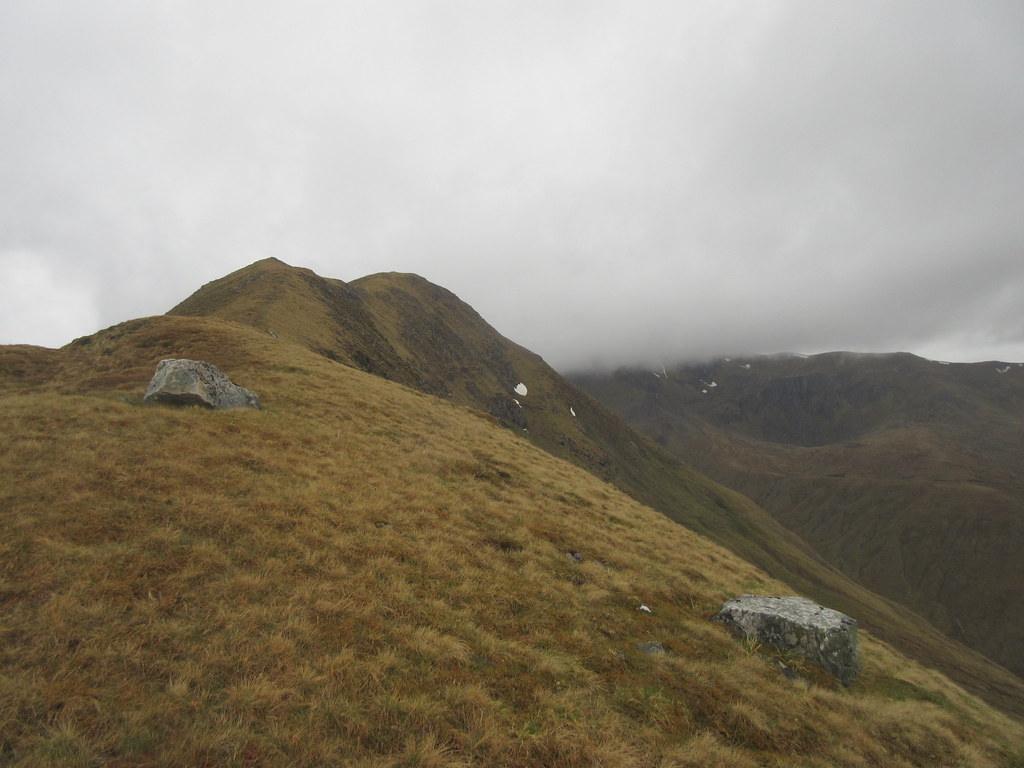 Looking back to Gleann na Ciche and Glen Affric from A’ Chioch: 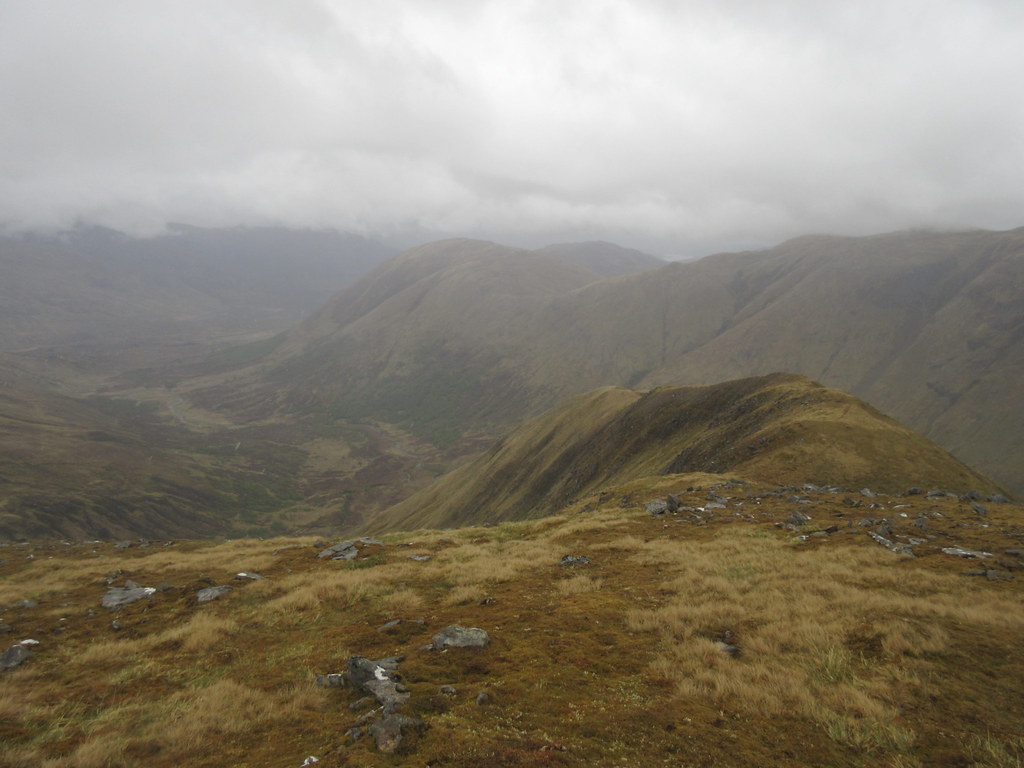 The summit was just about clear, and there was more easy walking to join the main body of A' Chralaig, the summit of which could no longer be seen. There is a very steep ascent onto the SE ridge, which is where the weather was really minging, although the actual summit of A' Chralaig was a little calmer. 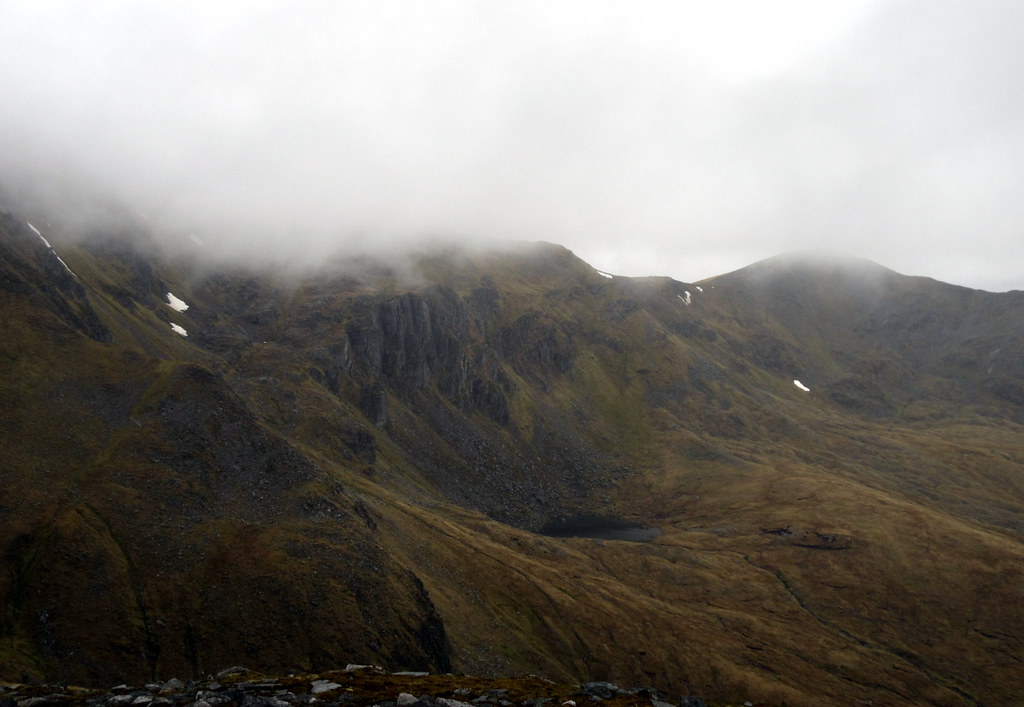 Mullach with S ridge in view: 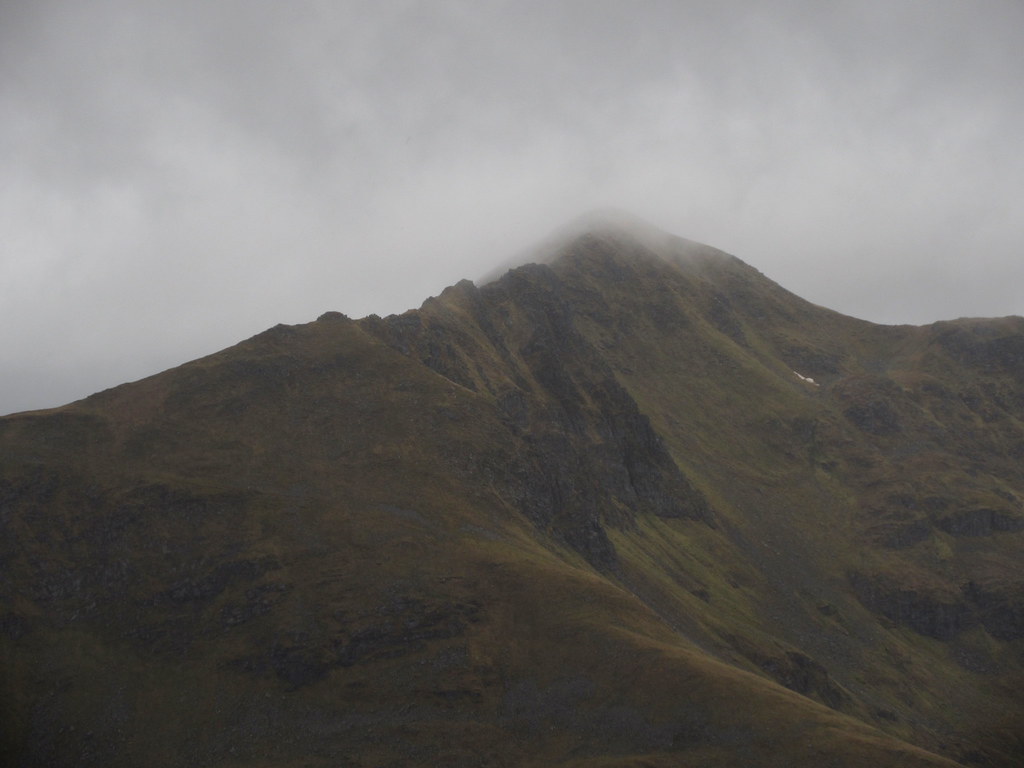 Approaching the summit of A’ Chralaig: 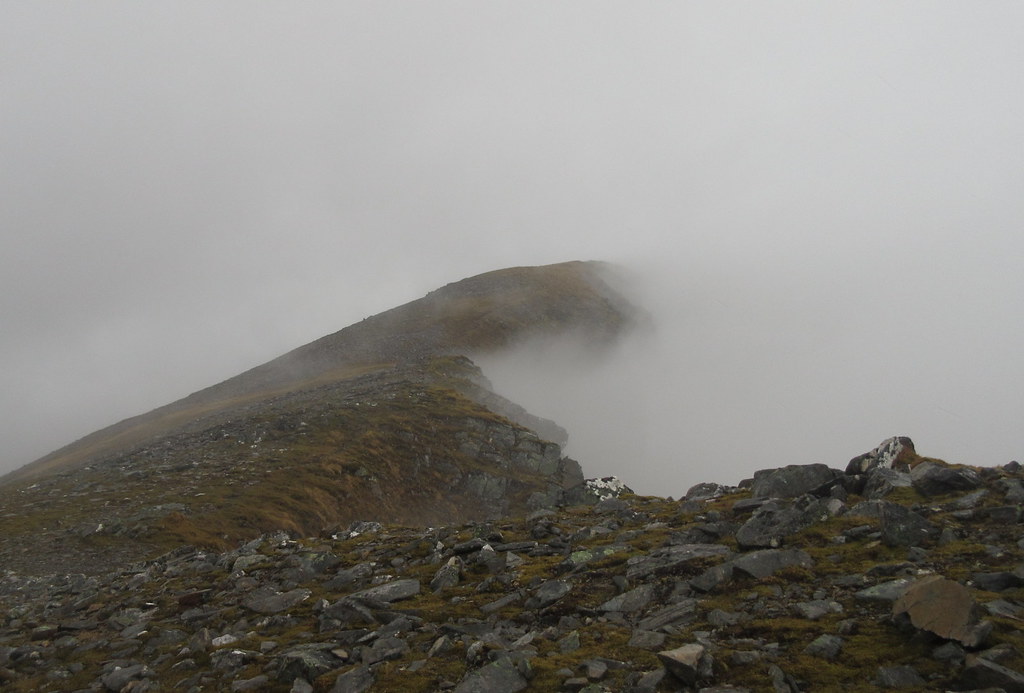 I had a quick bite to eat on A' Chralaig, and the mist swirled about, briefly exposing the Cluanuie Inn and the top of Glen Shiel. After a short amount of descent, visibility improved, and the wander over towards Mullach Fraoch-choire wasn't too bad at all - I do like the sweeping, zigzagging ridge here. 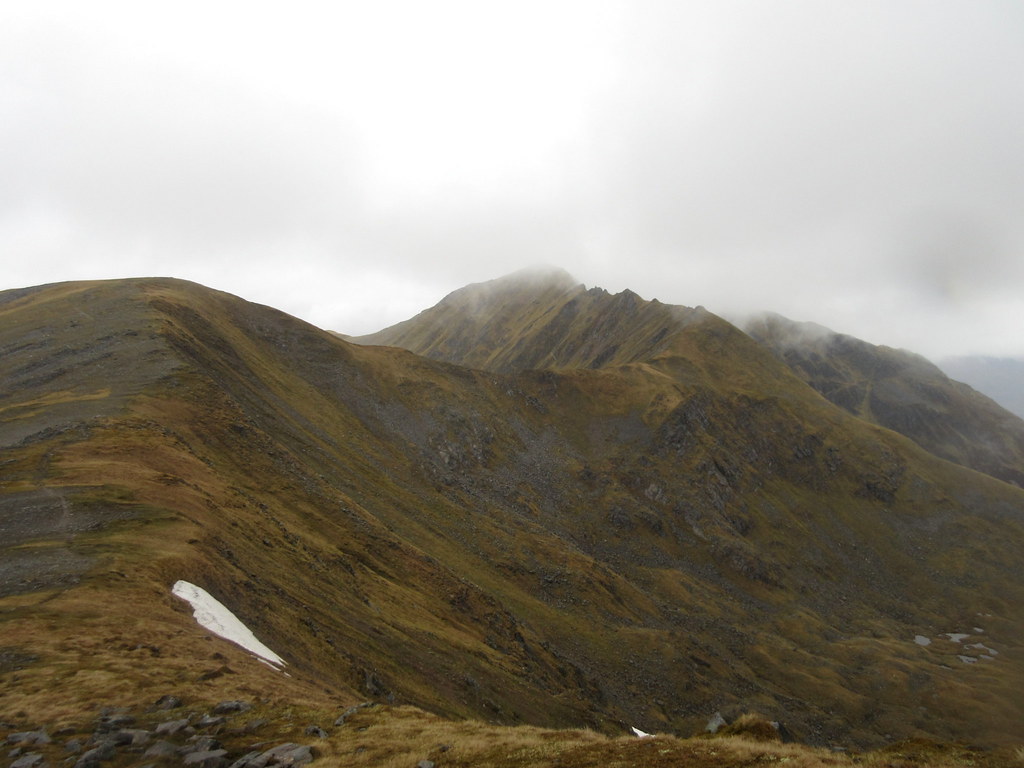 If the weather had been really poor, I was ready to descend into Coire na Craileig to avoid the pinnacles, but I carried on instead. I knew they were easy, but the greasy rock makes them a bit more dangerous - definitely a place to watch your step. I initially tried to stick to the skyline, but after a couple of easy moves, I was left with a steep and greasy slab to descend - coming up it in dry conditions might be OK, but today I retreated and followed the path, which was barely more than a walk. 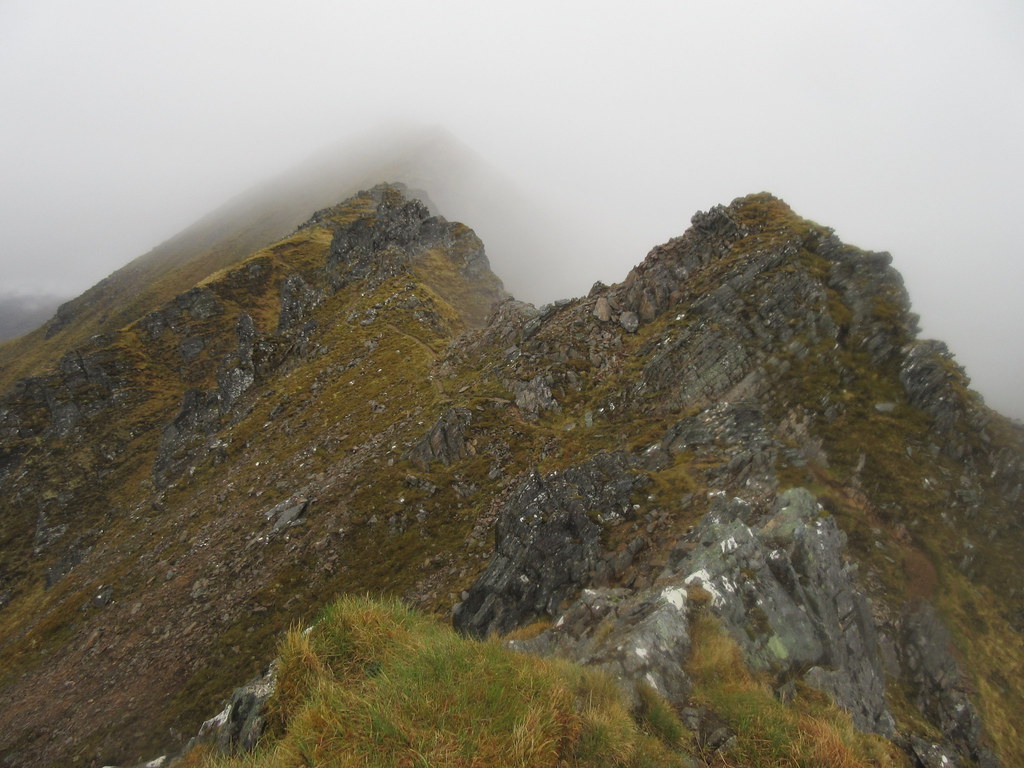 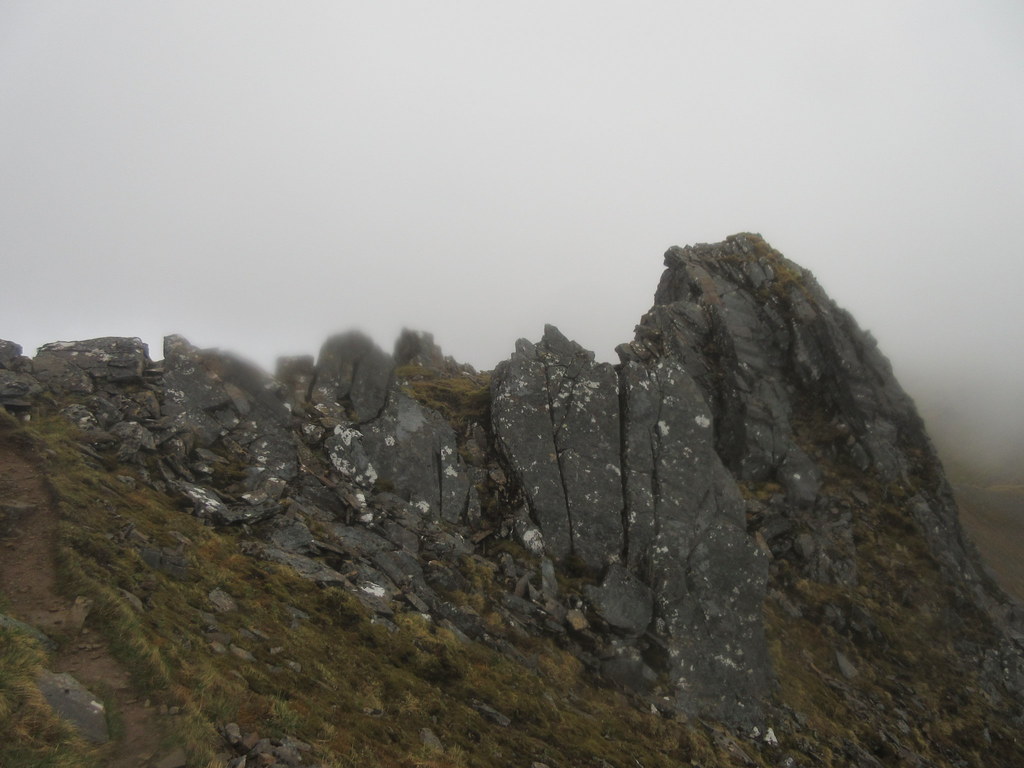 Having missed the large group on A' Chralaig, the only folk I met on the hills (plenty of people down by the loch)today were a trio descending back towards the pinnacles, presumably to drop back down to the Cluanie Inn. Can't say I'd ever fancied approaching these hills from that direction - all of the best ridges are on the Glen Affric side.

There was no view on top, so I quickly made the steep descent to the NE summit. There is a nice little arête here which presents no problems in the summer, but on my first visit it had a double cornice of none-too-stable snow on it, and we had to inch along it prodding with our axes to make sure we were standing on the actual ridge, and not on the rubbish snow overhanging either side. 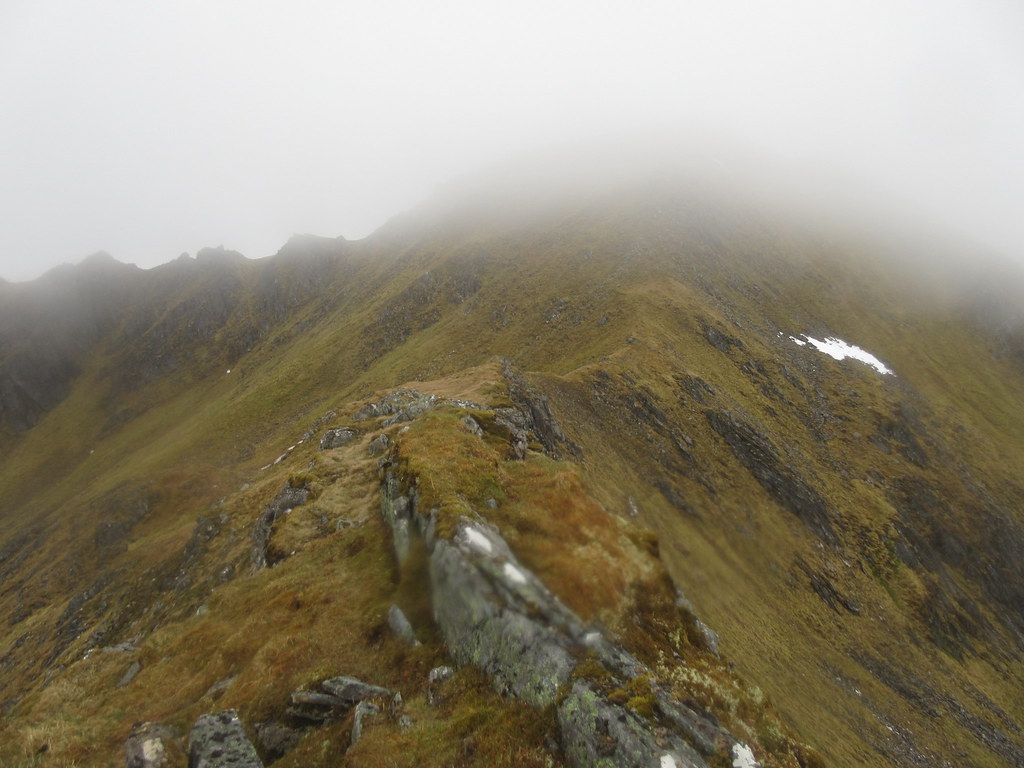 As I dropped down to the big cairn on the N ridge, the weather improved dramatically, and there were sunny views down over Loch Affric. I had a proper stop by the cairn (I'm sure this used to have a plaque on it as a memorial to someone who died on Everest, but I couldn't see anything today. Maybe I'm mixing it up with somewhere else). 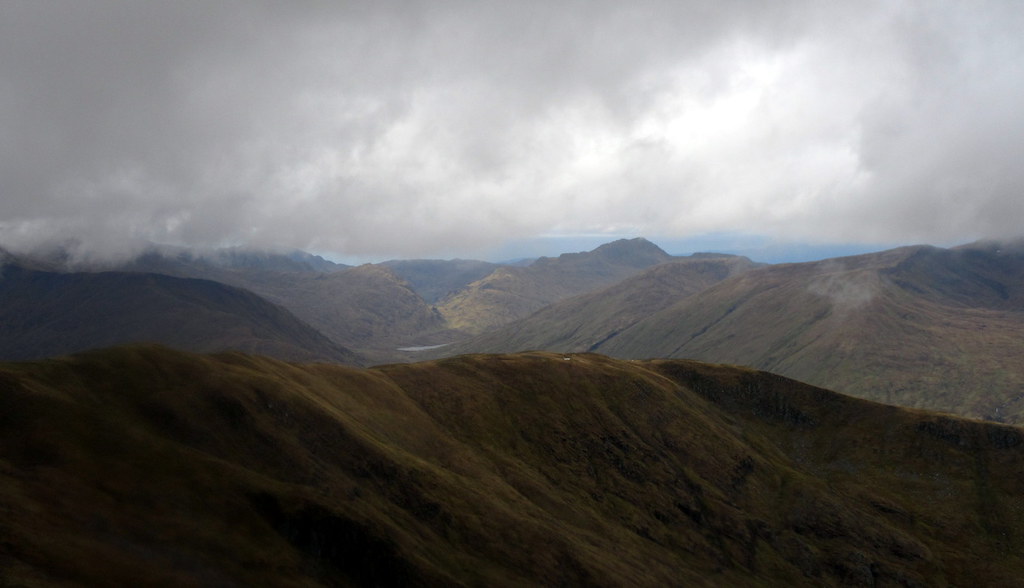 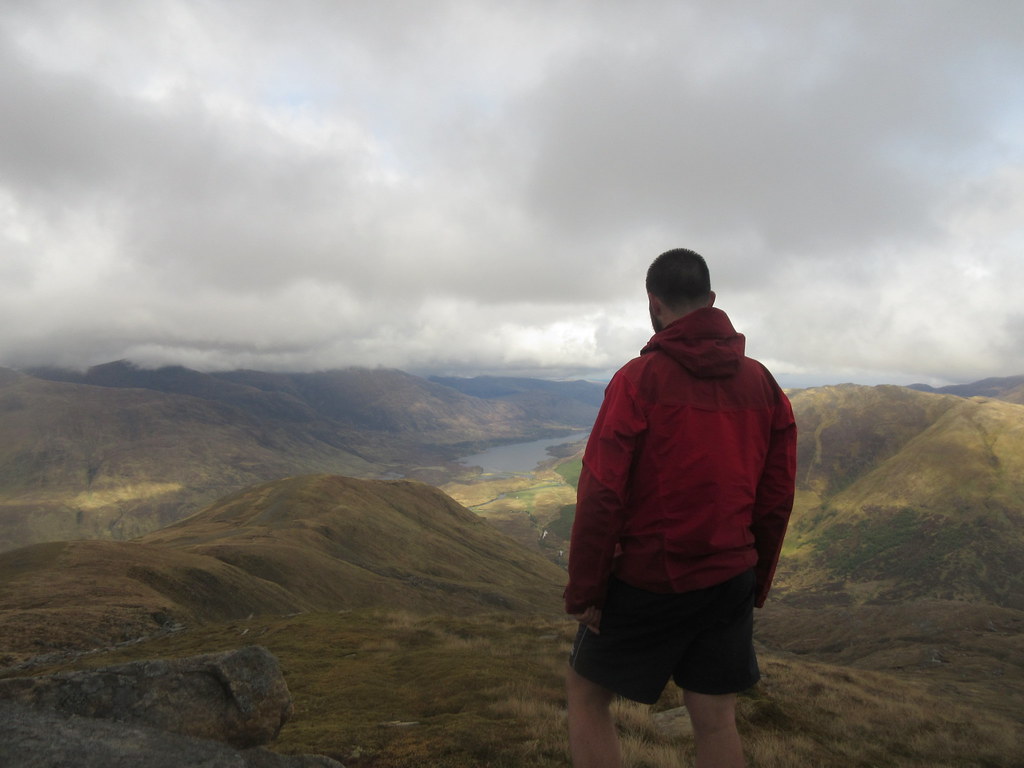 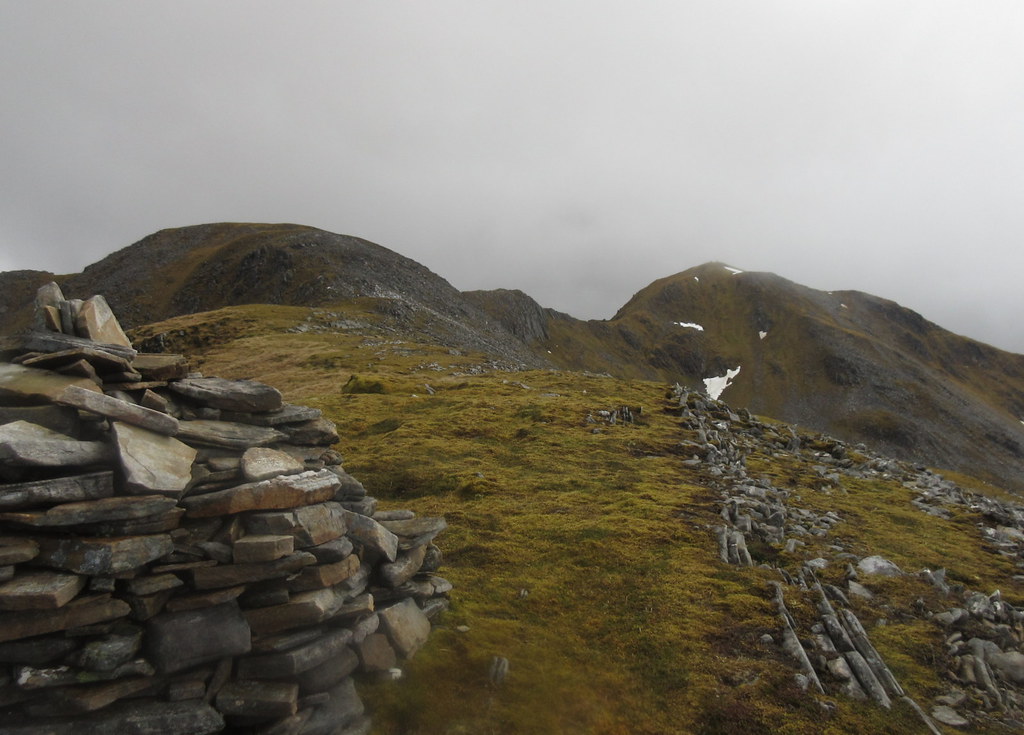 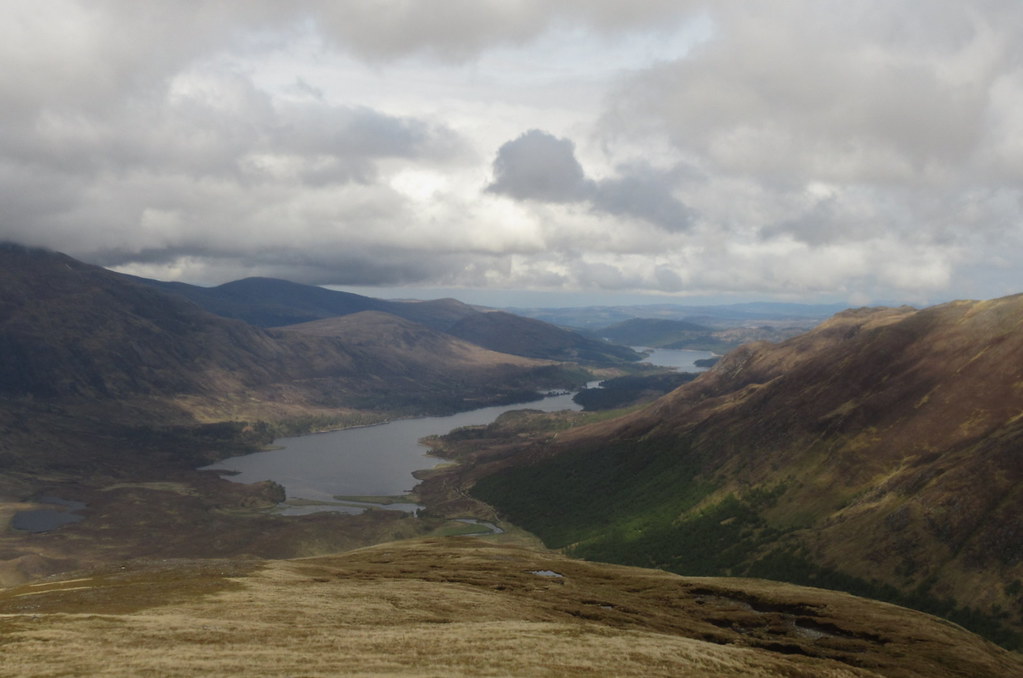 As the ridge steepened, I dropped off it into Coire Allt Donaich, scaring a few deer. Descent was steep but easy enough, and lower down in the corrie there were some lovely waterfalls across slabs. Eventually I picked up a very faint stalkers path (only shown on the 1:25,00 map) and dropped to some shielings. A quick splash across across the river took me to the track within a couple of minutes walk of my bike.

Last descent to my bike: 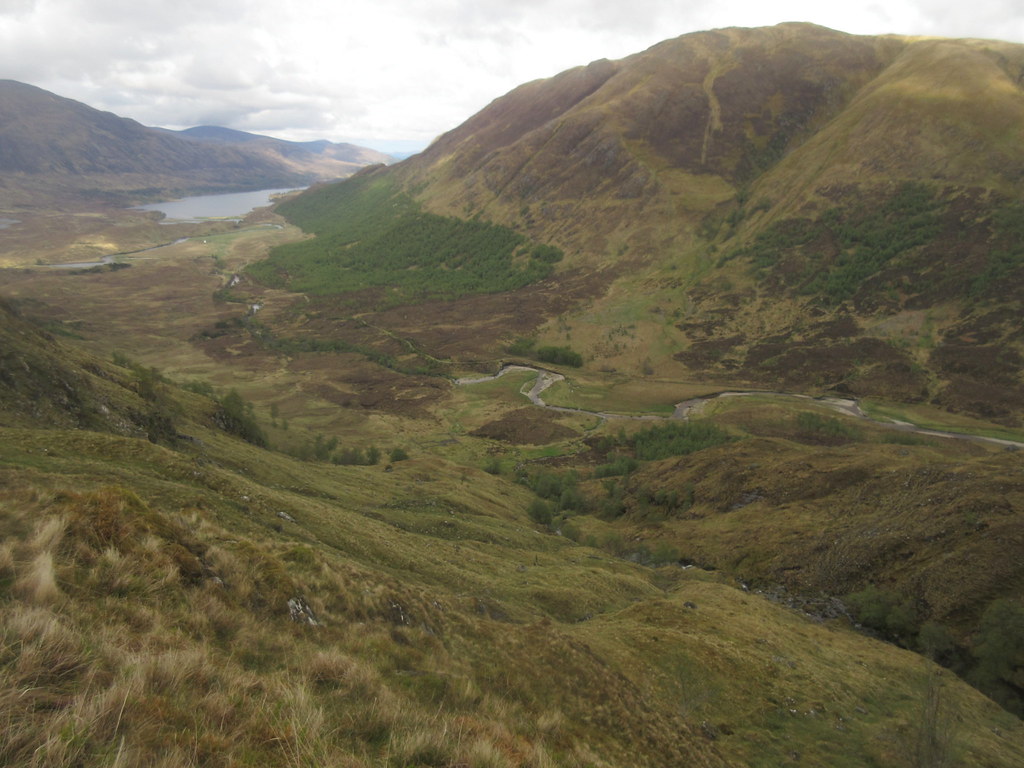 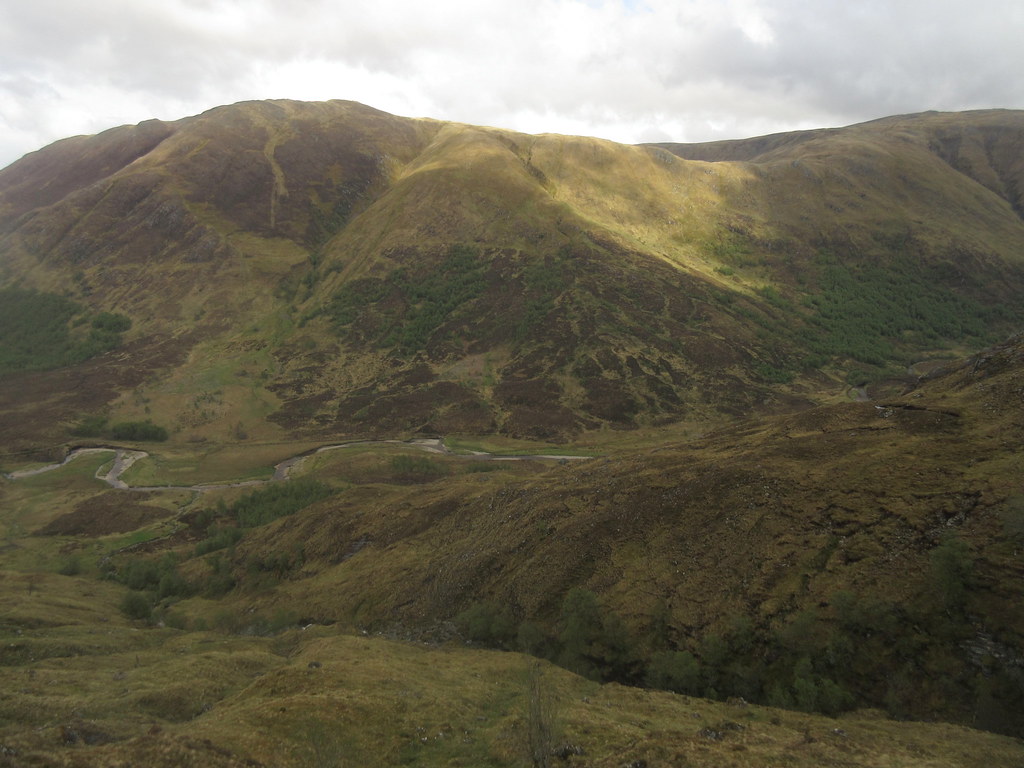 Waterfalls on the Allt Donaich: 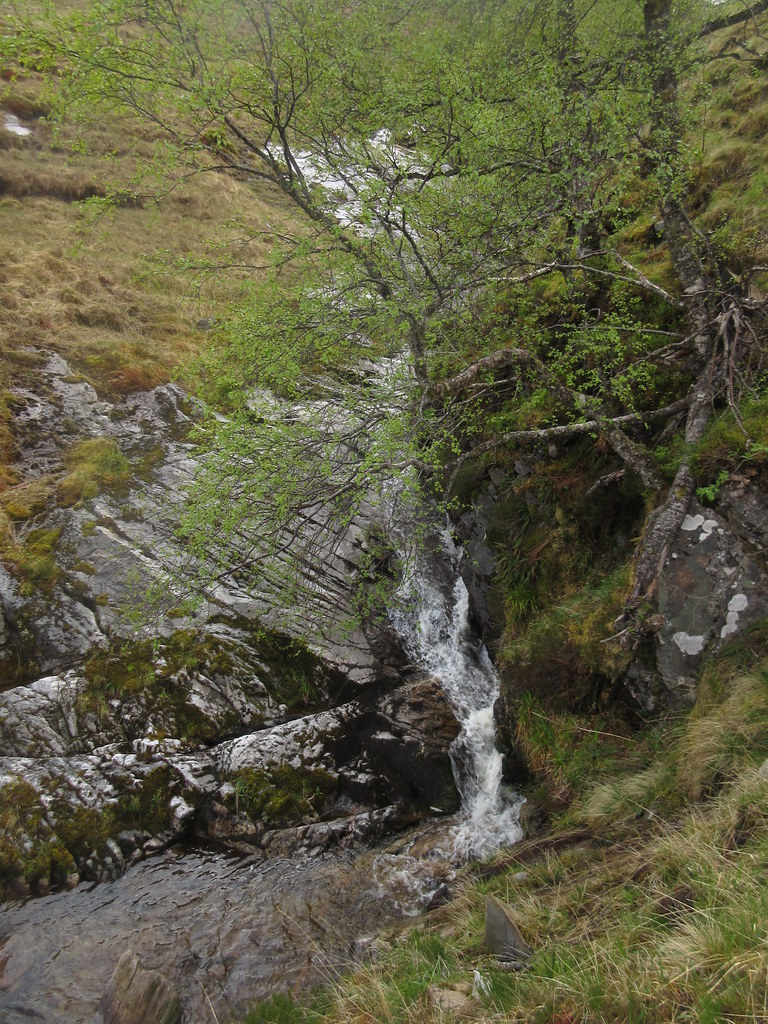 Then it was a pleasant pedal back to the car, passing many more people than on the way up (walking, cycling, and in cars).

Looking back to today’s hills: 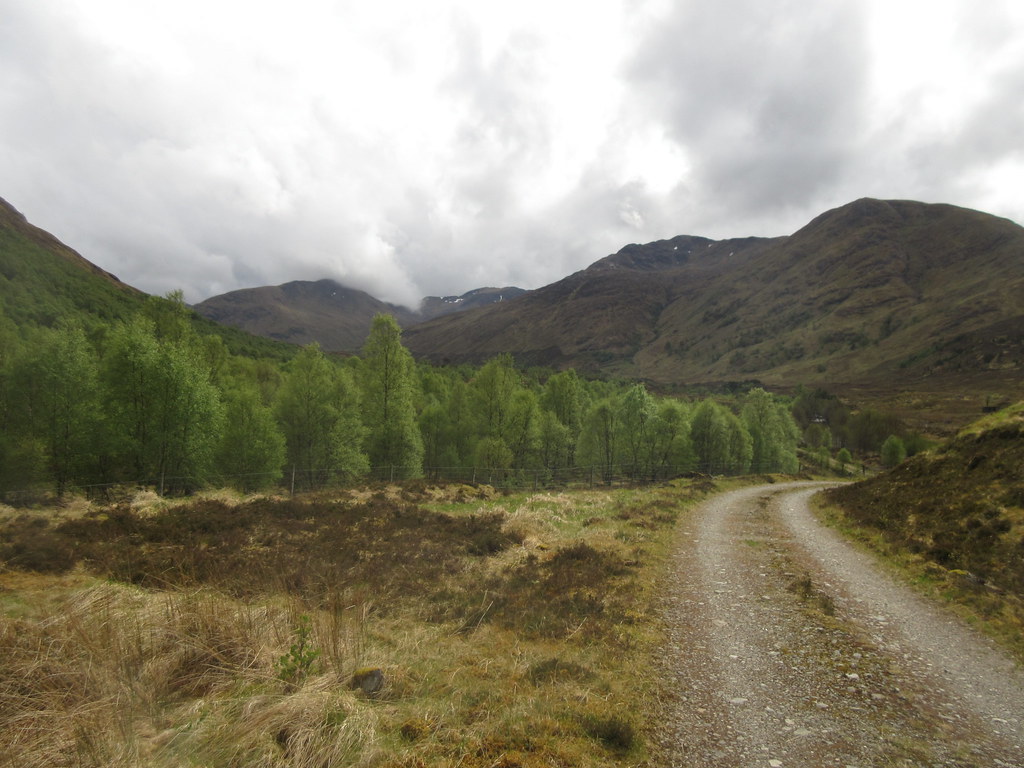 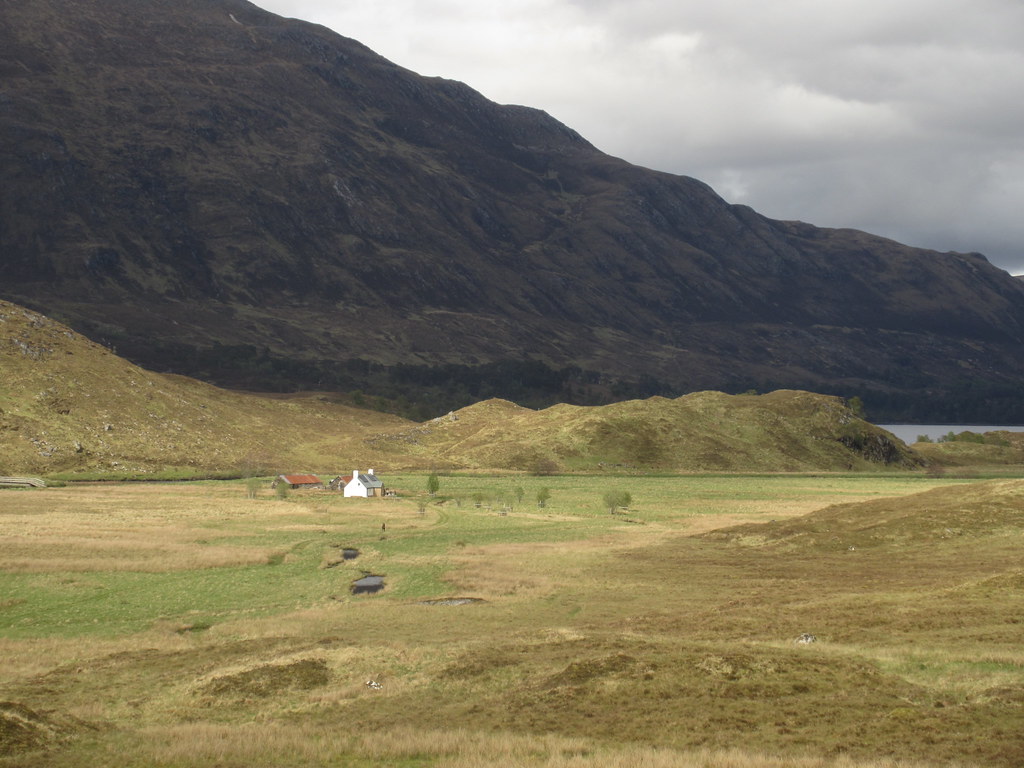 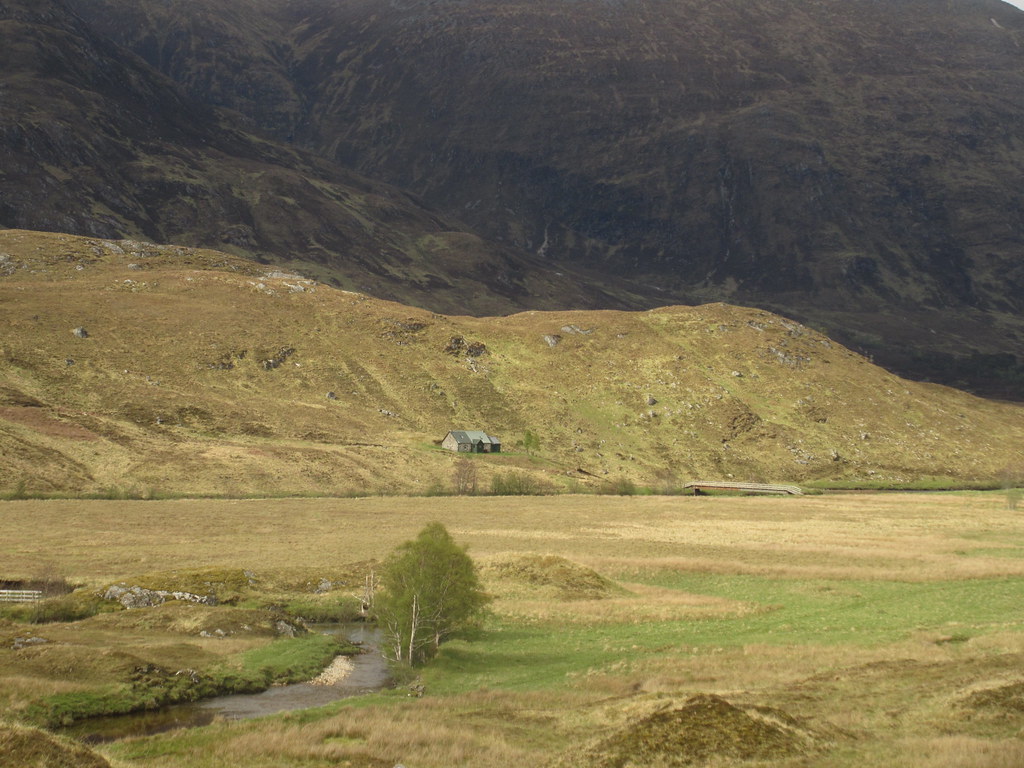 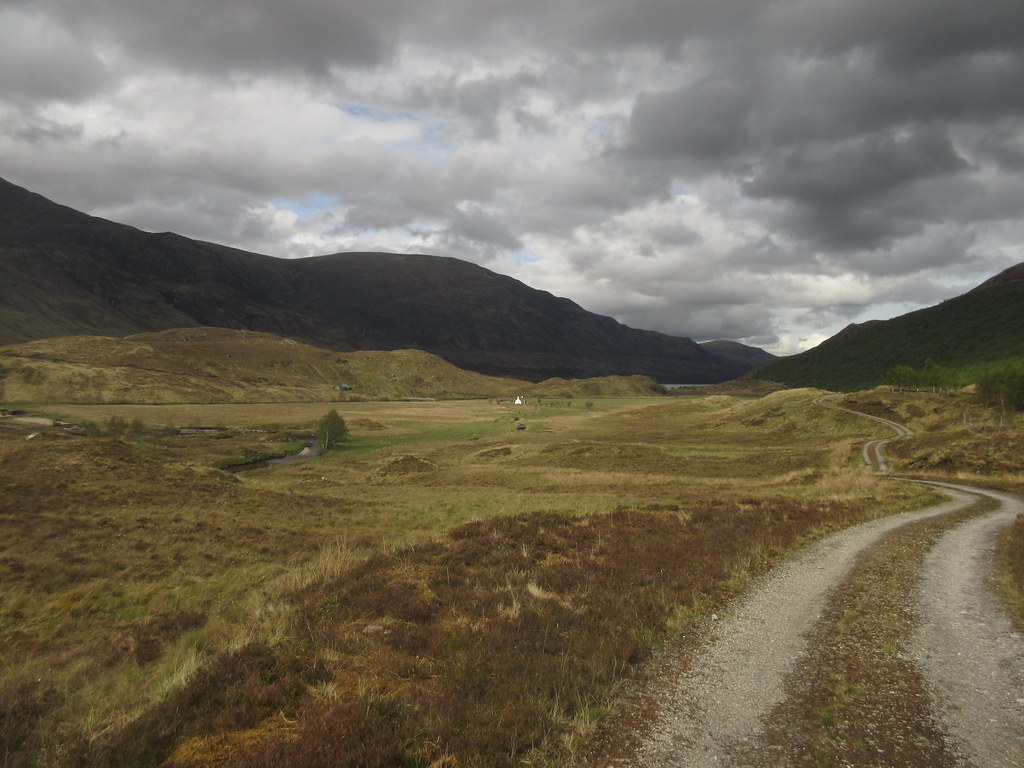 An Tudair across Loch Affric: 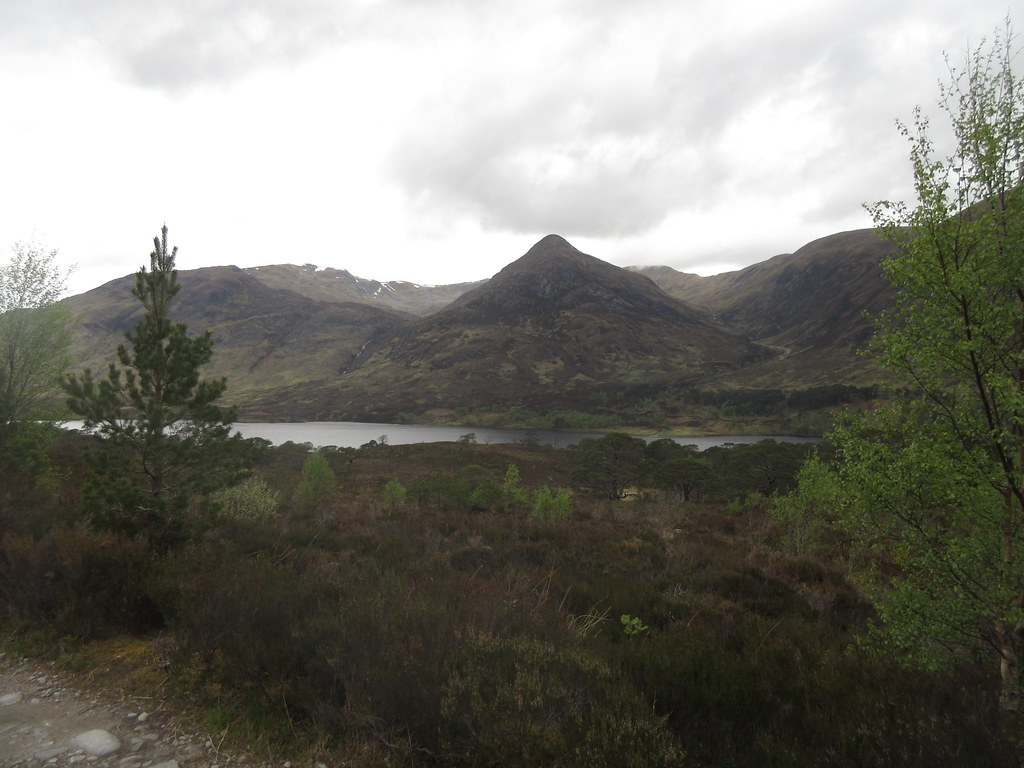 While there were a couple of points earlier on where I'd wondered why I'd bothered, the day turned out pretty well in the end, and I would quite happily have stayed somewhere up Glen Affric for the night if reality hadn't been calling me home.

Some good pictures and interesting landscape. And plenty of water on the Affric side, which is something I'm always on the lookout for now -well I suppose this area is a watershed of sorts for west/northeast.

Good report and it looked a really interesting route, thank you for sharing.

Great read; but I'm conflicted. I just wish I lived sufficiently close for the prospect of a poor weather day not to be so dreadful!