This was my Plan B walk when I was heading up Tolmount, but I didn't need to use it as the weather wasn't too bad, so yesterday with poor visibility forecast on the higher hills, which was wrong for at least one of them but never mind, I opted for this! I figured that this should be within Millie's limit of up to 10 miles/5 hours, and it was - just! It was 9.98 miles and took us 4 hours and 50 minutes.

Arriving at Glen Doll, we paid for our parking and set off following the track along to the left of the river, bit nicer than the forestry road on the other side. There was a cuckoo calling constantly, it certainly had Moss puzzled! She kept looking to see what it was that was making the noise, but the cuckoo remained hidden. We were soon at the diversion to Bachnagairn, with the recent rain the ground had got a little bit boggy but nothing too bad. Though Moss made an error and ended up wearing mud leggings... They were happy as dogs could be, Moss in particular was delighted to find that the mud was back for her to play in. I was just happy to make it round without doing a fashion faux pas in wearing matching outfits! Though I guess some dog owners do do that, though sadly not with mud.

We reached a wide 4x4 track and followed that through a small patch of woodland and along, passing where the bridge had once been. It doesn't look like it is going to be replaced any time soon. Following the track that ran alongside the river, we soon had the trees of Bachnagairn in sight. 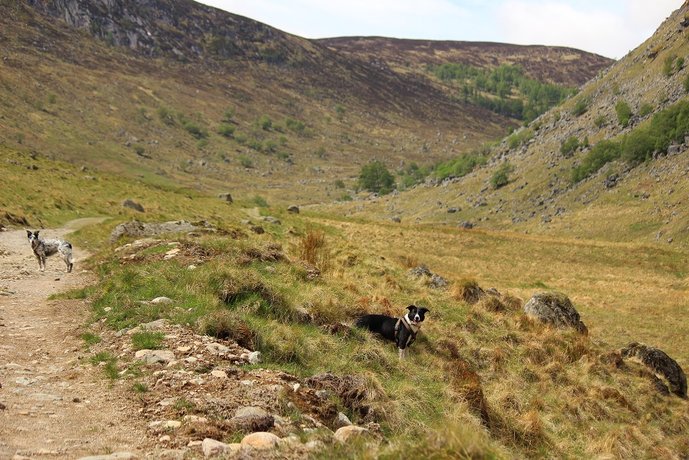 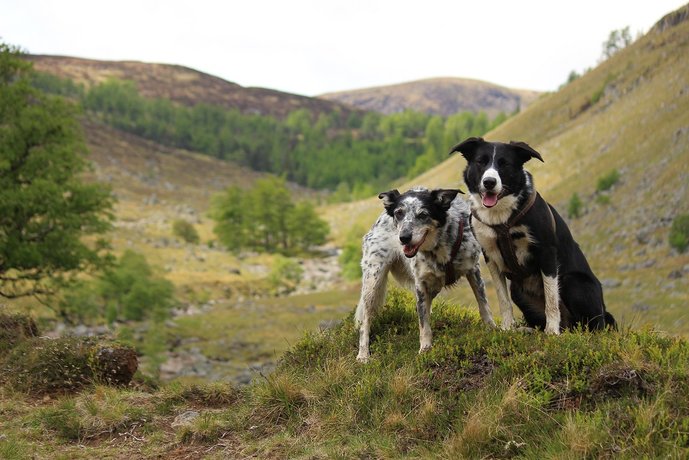 The route became lined with more and more trees, and the river had carved out still pools in the rocks below where the dogs could have a bit of a swim. It was as we were investigating several of the pools that we realised that we were not alone on the track - a cyclist was catching up to us. Pushing his bike, the track at that point was made up of large stones and boulders so not good to cycle on. Turned out he was part of a group heading for Ballater. Several others passed us while we stopped just after the first bridge for a break in the cool of the trees, Moss was fascinated by two of them who were carrying their bikes over their heads. Think she found it a bit puzzling!

We didn't stop for long and continued on our way, passing the second bridge where the path splits - over the bridge lead to Broad Cairn and the other way to Jocks Road. The weather was so pleasant and Broad Cairn so close that I was tempted to switch for the Munro. If it was only Moss with me I may well have done, but Millie was with us and not knowing how long it would take, I knew it may well be pushing her a bit too much. So we stayed on our planned route and watched the cyclist making their way up the other side. In all honesty, I wasn't too bothered. Broad Cairn will be there another day, Millie may not be and I was enjoying having her with us on this walk. And the walk we were on was a very nice walk, the path now leading across the moorland above Loch Esk. Moss found another pool to splash around in, and didn't want to leave it! It was not long after that I realised we were under observation... Seeing large groups of deer is becoming a common occurrence on walks at the moment with three of the last four walks in the hills resulting in spotting (and being spotted by) large herds of red deer! I can't remember seeing such big herds on previous walks, but perhaps that is a reflection of us moving away from walks with more people going on them. After the cyclists, I didn't see anyone else until we got back to the car park!

With the deer watching, we followed the path that was a bit boggy and indistinct in places, but the fence posts guided the way, until we reached Jocks Road. From here it was a case of following the path back down to Glendoll forest and down to the car park, taking the path through the forest rather than crossing the bridge and following the wider track on the other side - with a stop of at Davy's Bourach on the way down. This is a great walk, and one I am likely to do again - probably in the late summer/autumn in the hope of seeing the deer rutting!

Thanks for posting this KatTai. I found it while browsing ideas for an easy(ish) hill trail run to do during my recent few days holiday in Scotland (I'm an ex-pat alas so don't get to spend much time in the Scottish hills). I completed the circuit in pleasant weather on 30 August and was very pleased with how it went. Nice variety of terrain to test the legs, including some squelching about on the high part of the crossing to Jock's road!