A misty start
After Sundays dreadful weather day I was back at Moffat to redo the Hart Fell. Hart Fell 808m, is classed as both a Corbett and a Donald. The forecast was for Scotland’s warmest day of the year so an early start was made. I left the house at 6.20 and was on the hill for 8, walking from the green hut.
As you can see from the snap the fog/low cloud was not quite a pea souper but deepened particularly as I started to climb. Luckily I had recent memories so I decided to go for it rather than waiting for the stuff to lift. Not improving
Following Sundays route I was soon out onto the moor. There was a quad bike track to follow but it does have cut offs from time to time particularly to the left. Although I knew from the compass that I was moving in the right direction but it was also memory time as one bit of cut grass starts to merge in with the surrounding moor, particularly with this visibility. There is a significant drop on your right side but you should be aware of it.
There was the occasional noise of sheep and lambs calling. Twice a grouse was sprung. They give you a start at the best of times and today made it even more interesting.
For some reason the bio rhythms were not good today and I was struggling a bit, the poorest I have felt on a hill for a long time. Sweating much more than normal and generally a bad legs day, it happens but I had come all this way and I was not having two failures in a week, so head down and plod on. Breaking through
It was almost an hour before the light was brighter and I came out of the gloom into a bright blue sky and confirmation that I was on the right track.
I took my time as the emerging views were top drawer and spent as much time looking back as forward. The numerous wind turbines to the east were a disappointing sight. Arthur's Seat
Before long I was at Arthur’s Seat and its small trig. Great views down the gorge and to the ridge of Swatte Fell plus the trail heading up to my destination. Across the top fence line a couple of deer are moving fast, did I spook them? Wild I presume and not escapees from the farm at the start. Wind Turbine abomination
This is not a difficult hill just a continuous uphill grassy walk and before long I had reached the summit plateau. I headed eastward the trig not yet in sight, just follow the small wire fence which I had to clamber over to get to the trig. Time taken 1.53 which was ok considering my condition.
The views were excellent even if the light was now bright and harsh particularly to the south. To the east the wind turbines must number around the 100 mark, an SNP abomination to the landscape. Path over the edge
Still keep focused and enjoy the other views. The heat was now living up to the forecast, glad I was here early, more sun cream applied. The path down
It was an up and down the same way day which was made more interesting as the cloud was only just breaking up constantly changing the views of the landscape all the way down. 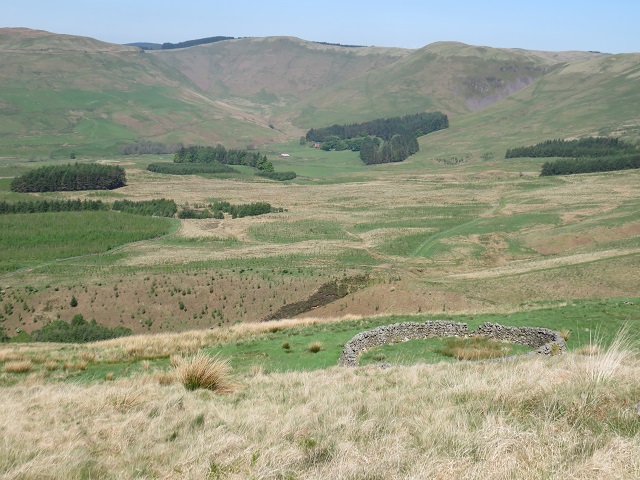 Devil's Beef Tub
There is an excellent view of the Devil’s Beef Tub and the ridge to Whitehope Heights, a Donald trip for another day.
On the way down I meet a couple of ladies and later a single guy, my only companions on the day. The end contrast with start photo
Another really good walk and a new area for my exploration. I am glad I returned quickly to embrace it and I will be back sooner rather than later.
Time 3.34
Distance 7.26miles or 11.68km
Ascent 2156ft or 657.15m