I and a group of work colleagues have just had a great trip using a wild camp and two moderate-length day walks to bag the remote Seana Bhraigh and all of the (Ullapool) Beinn Dearg Group in a single relatively-easy 2-day trip, rather than two separate very long days.

We left the walkers car park at Inverlael about 10am on Day 1, headed almost due east through the woods on a good track for about an hour, then up the Lael glen on a good relatively-level path to where the path divides (just past a prominent waterfall on the river below) and marked by a small cairn. 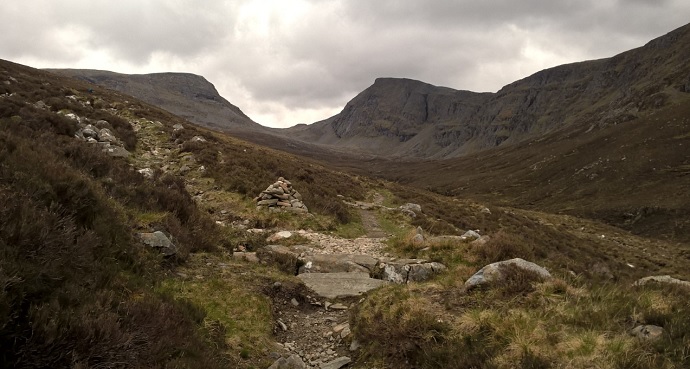 Junction on the Beinn Dearg path

The left-hand branch follows a fairly gentle rising traverse up into the broad corrie containing Lochan a Chnapaich where we spend an hour putting up tents etc, then a steep but straightforward climb northwards up an easy grassy climb onto the broad west ridge of Eididh nan Clach Geala and an easy stroll to the summit - not clear which of the two summit cairns was highest, so we visited them both, to be on the safe side.

Then out across the remote moorland to the spectacular view-point at the head of Cadha Dearg, with a bit of a detour needed to avoid a set of cliffs between Meall a Choire Ghlais and Loch a Chadha Dheirg which I hadn't spotted when initially planning my route. The views north down Cadha Dearg to the Assynt hills beyond, with Seana Bhraigh in the foreground were amazing. On the way to Seana Bhraigh

A bit of a climb up onto SB's summit plateau, revealing epic views of the very pointy 905m An Sgurr/Creag an Duine and its very narrow ridge perched proudly on the other side of the stunning northern corrie. An Sgurr must be one of the most-spectacular hills which is not on any of the main hill-lists? 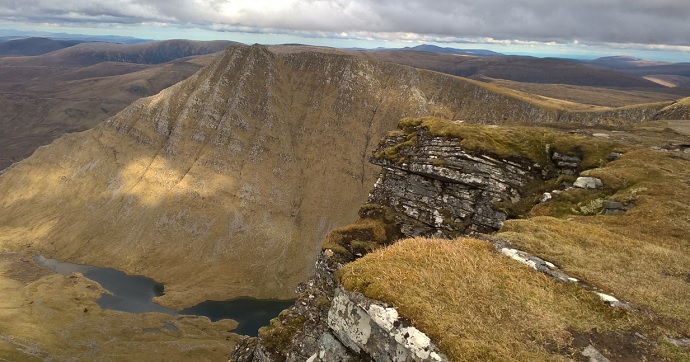 An Sgurr from Seana Bhraigh

Next day, we headed east back up the easy gully to NH267837 and then south up easy slopes to the 942m former Munro Top, followed by a very pleasant stroll via Ceann Garbh to Meall nan Ceapraichean, with stunning views in all directions. A small amount of straightforward descent, before an easy climb to Cona Mheall for lunch (and more great views, including the view north into yet another big hole (this one containing Loch Tuath). Back down to the head of Coire Grandha, where we picked up the good path on the north side of the 'Famine Wall' up onto the plateau and the straightforward final gentle ascent across the rocks to Beinn Dearg's impressive summit cairn. 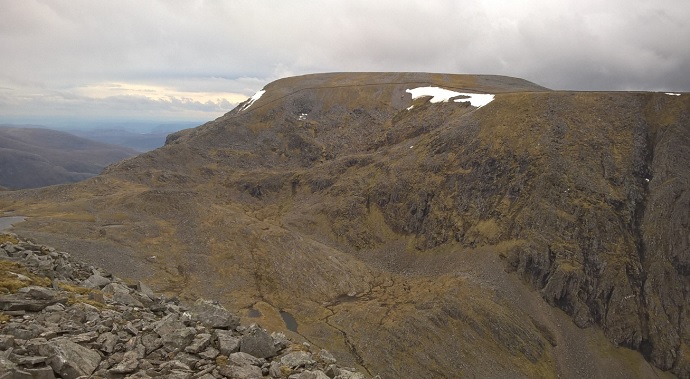 Back down to the col between the 3 Munros and an easy descent into the valley between Beinn Dearg and Ceapraichean, followed by a simple level traverse under Ceapraichean's cliffs to return to our campsite for a well-deserved cup of tea.

Packed up the camping stuff and set off on the 10Km trudge back to the car at Inverlael, getting there just before 18:00 (9 hours after leaving camp-site in the morning, including the time making tea and packing up the tents etc)

I'd definitely recommend this as a great 2-day trip and, IMO, this combination is much better that tackling these via two separate too-long days.

NB Save it for a day when you can enjoy the amazing 360 degree views.

BTW Are there any other hills which are as spectacular as An Sgurr and which are not on any of the 'classic' lists of Scottish hills?


2-day_SB_BD_GPS_Route.gpx Open full screen  NB: Walkhighlands is not responsible for the accuracy of gpx files in users posts

Re: 2-in-1: Seana Bhraigh and the Beinn Dearg Group

Some nice atmospheric pictures there Boris.