g12.gpx Open full screen  NB: Walkhighlands is not responsible for the accuracy of gpx files in users posts
Our plan had been to climb Meall a’ Choire Leith that we’d missed out on our visit to the area last year. Although there was a big thaw and the snow was fast disappearing, the road to Glen Lyon was impassable after the Lochan na Lairige dam (we tried, got stuck and had to dig the car out using ice axes with the help of other walkers, cheers guys!). So we decided to park by the dam and go for a direct route from there to the summit of Tarmachan. 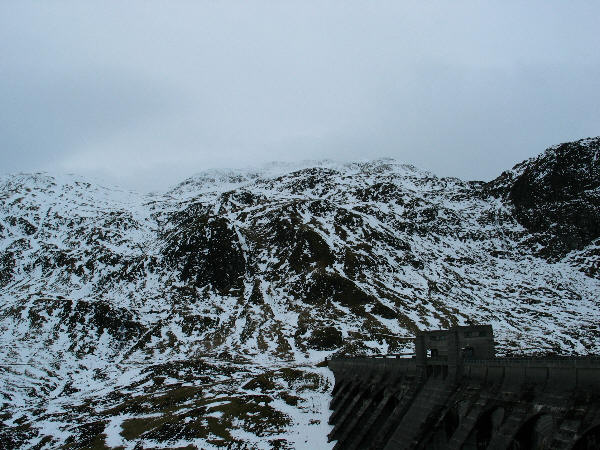 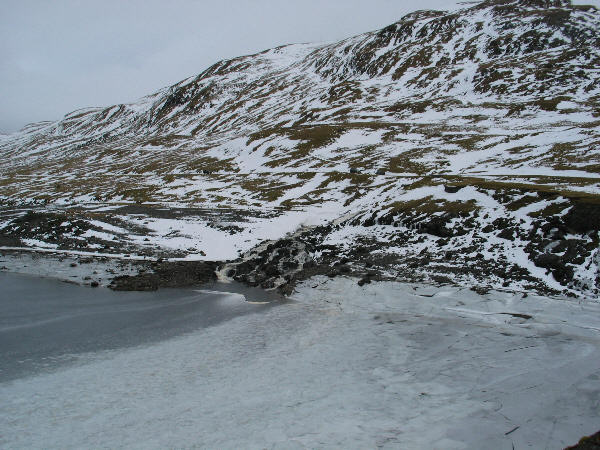 ice at the dam

Through the convenient gate and across the dam. The lochan was still frozen and ice floes had been blown against the dam, quite a sight but no penguins about today. We followed the fence to the south west for a few yards then turned to the west, straight up the slope to the left of the crags and to the right of the stream. This was mixed ground of turf, rock and snow and we climbed steadily. 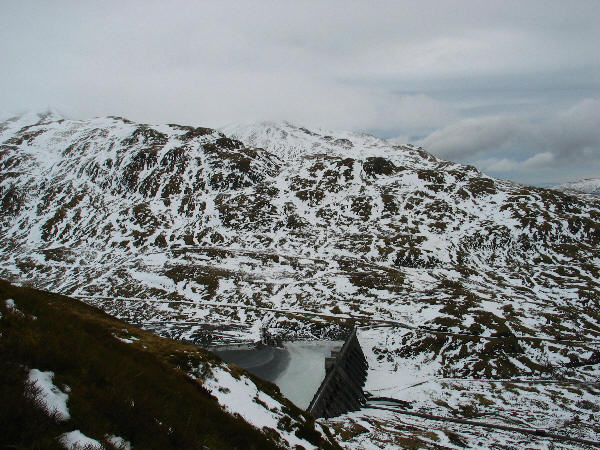 looking back to the dam from just below the plateau

As we got higher we headed to the north a little and reached a plateau, we contoured around a knoll then headed north up a snow gully where Chaz got to use his ice axe for the first time. At the top, Chaz found a good snowdrift to jump into, a favourite pastime of his! 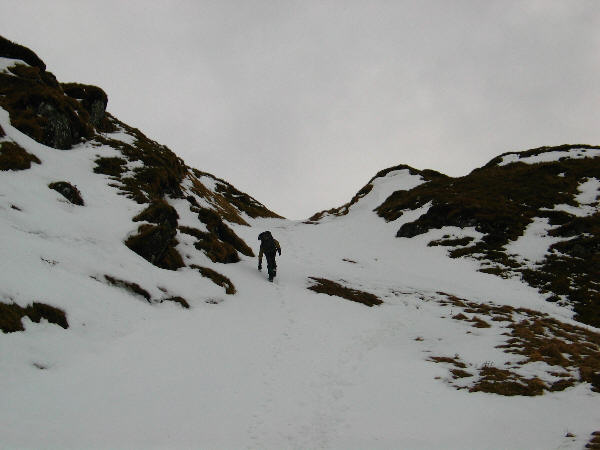 Chaz trying out his ice axe 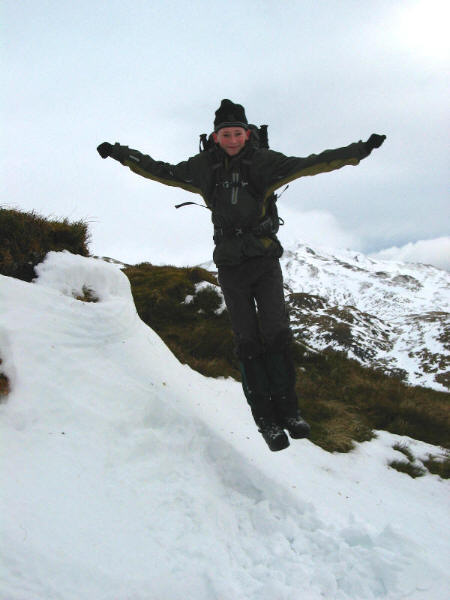 Now a turn to the southwest onto the ridge leading to the summit. Here we put crampons on, up to now the snow had been mostly soft but was now becoming harder and icier with the higher altitude and wind effect. A nice walk in a brisk wind and good crampon practise, but nothing like the gale on our previous visit here. 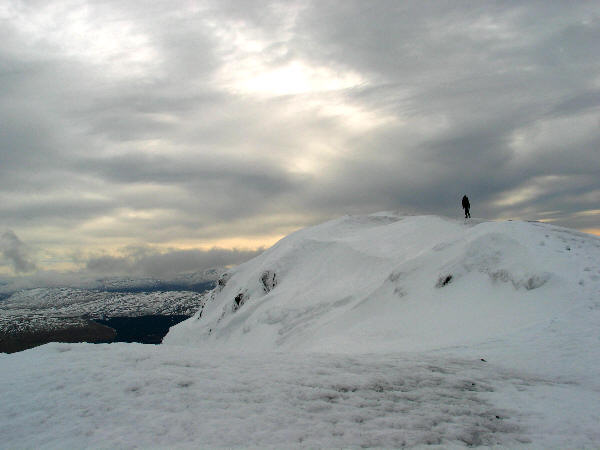 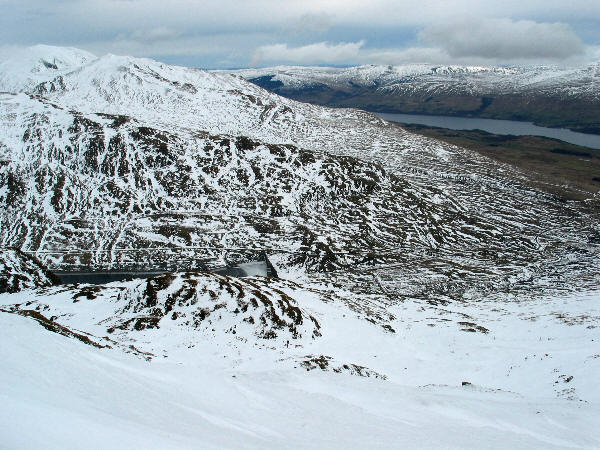 After a bite to eat we headed down on the main path for a short spell then dropped down to the north east to retrace our ascent route. A good way up Tarmachan we decided and a mountain that we like a lot!

g13.gpx Open full screen  NB: Walkhighlands is not responsible for the accuracy of gpx files in users posts
This was the first day of our 2 day winter skills course, our instructor was Gary Hodgson of Tarmachan Mountaineering who is based in Killin. We parked next to the track just north of the Ben Lawers Visitor Centre and headed along the main path towards Tarmachan. Just after the path turns north, we left the path and headed north west to Cam Chreag, below Meall Garbh. At the first decent snow patch we spent some time covering ice axe arrests. This was quite difficult in the soft snow but we were able to practise the main positions and had plenty of fun at the same time. 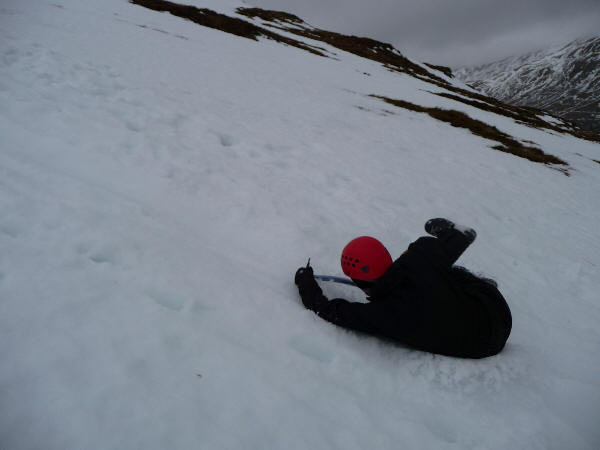 We then moved on up to steeper ground, first of all taking at look at the avalanche potential. We dug out a test block, this was really interesting and we were pleased that our conclusion of the general conditions was confirmed by the SAIS review that we saw the following day. Avalanche risk checked out as ok, we then spent a good amount of time on steeper ground and gullies, I’d really been looking forward to this and had asked Gary to fit plenty of steeper ground into our schedule if possible. 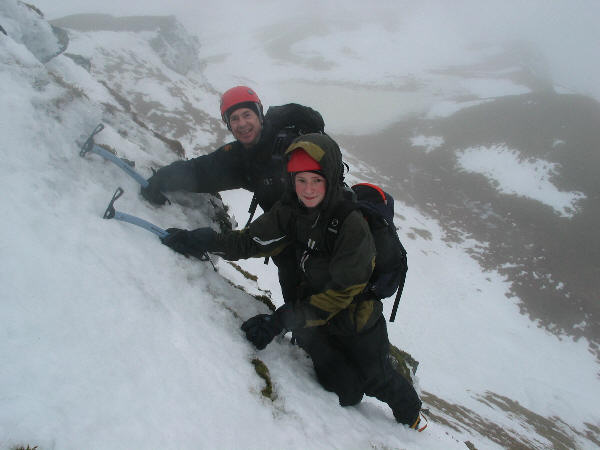 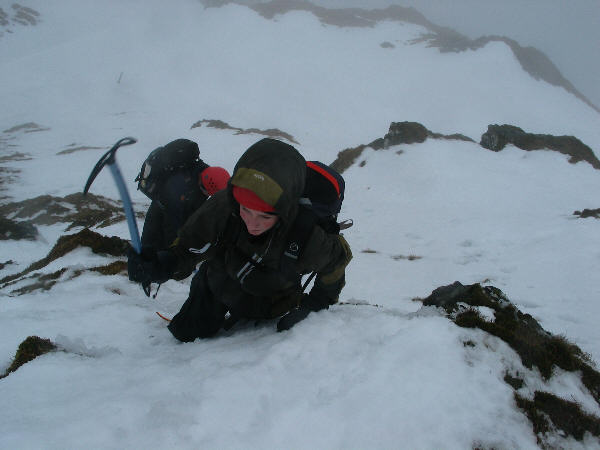 It was just great, Gary quietly took us up and down ground that we wouldn’t have yet considered on our own, having judged our ability and performance as the day progressed. He also concentrated on detailed route-finding in the steep terrain and the lines to take to reduce avalanche risk. We also had a go at vertical ice patches on small boulders but the ice was melting fast so wasn't able to take much punishment! 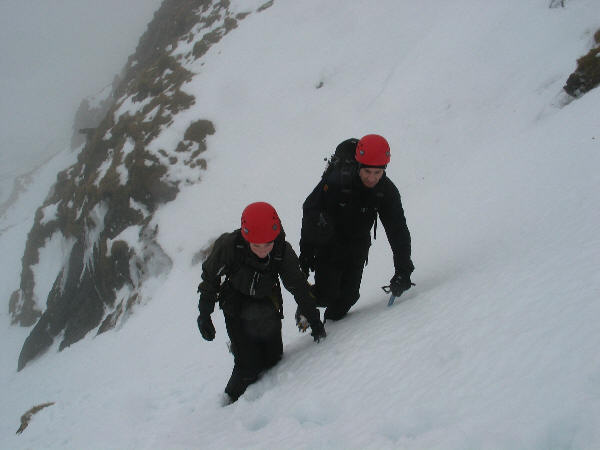 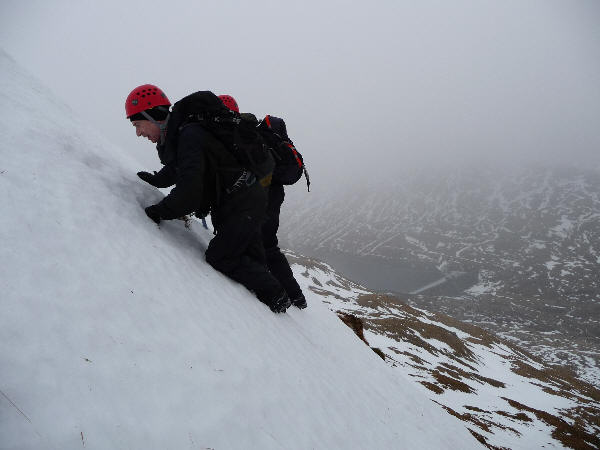 A climb to the summit of Meall Garbh nicely rounded off our ascent after which we headed southeast to join the quarry track about 1km from where we’d parked. A full day out, almost dark by the time we got back to the car, we went to the Ben Lawers hotel for a well-earned pint, very pleased at the advances we'd achieved under Gary's guidance.

See my next post for day 2 of Winter Skills!

Moved beyond my winter level in just a few days

Yes pity the thaw was so quick, we didn't get much hard snow during the week but did find some more in Glencoe on our last trip (report to come) so were lucky to experience a wide range of conditions. I'm really enjoying winter and since I've done most of my walking in the winter months it'll be strange I think when I'm out with no snow. Hope I don't miss it too much!