Friday 26th May 2017 was just a super day in Scotland with temperatures predicted to hit 30 degrees celsius in the North of Scotland.

I bagged the 3 Cairnwell Munros during the heat of the day, and as it only took 4.5 hours, I decided to start on the Eastern side and howf the tent up the hill and wildcamp near the summit of Carn an Tuic.

The car park is 2km north of the Glenshee Ski Centre on the right hand side of the road. There are two bridges over the river, take the left one covered in grass and not the arched wooden one. The first munro lies straight ahead from here and it is very stoney for the last few hundred feet (there is an obvious path through this stuff though)

The path is a low ascent initially but gets much steeper and boggier. It had been rather windy but I found a sheltered area just before the stoney walk to the summit. I unpacked the tent and had it up in no time and relaxed watching the sun do down over Lochnagar. As soon as it disappeared I hit the hay.

View straight back to the carpark with the accomodation sorted!

The might Glas Moal behind my tent - and yes I know its on a slope! 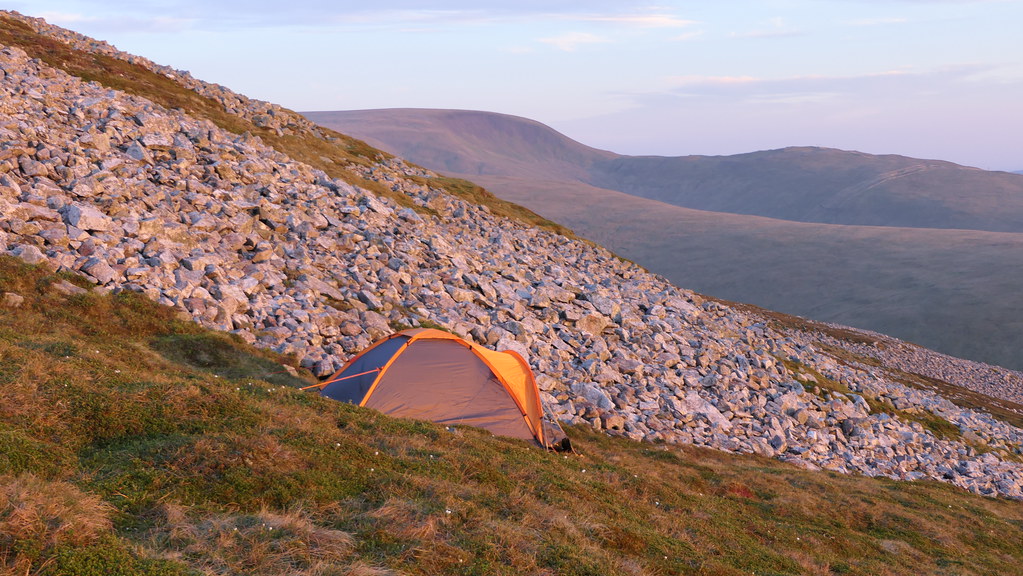 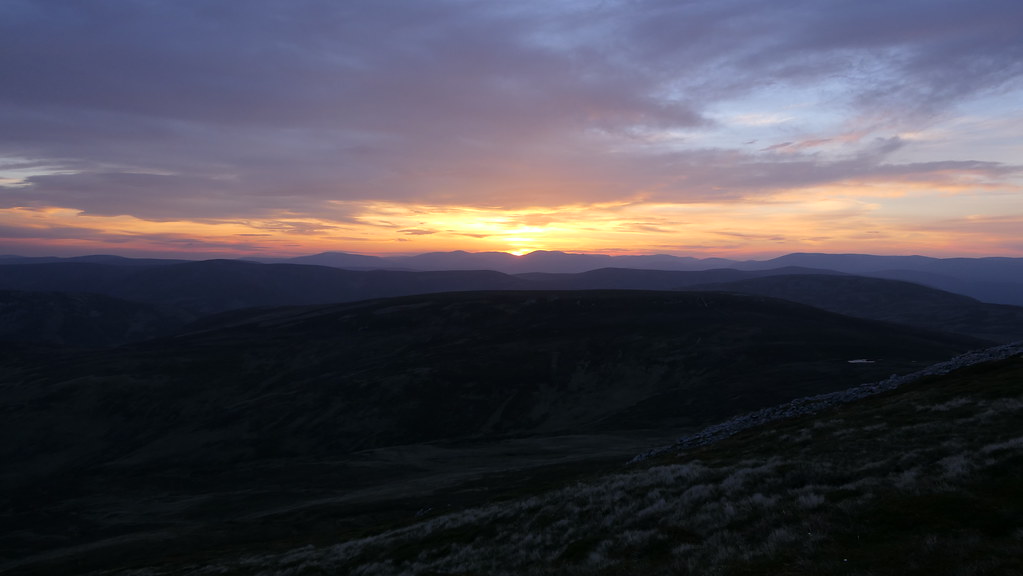 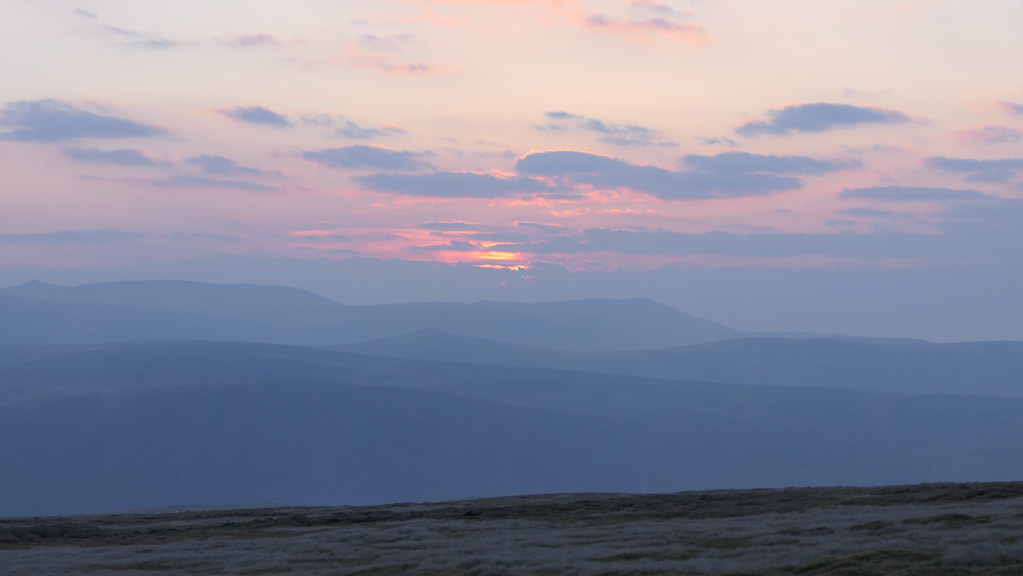 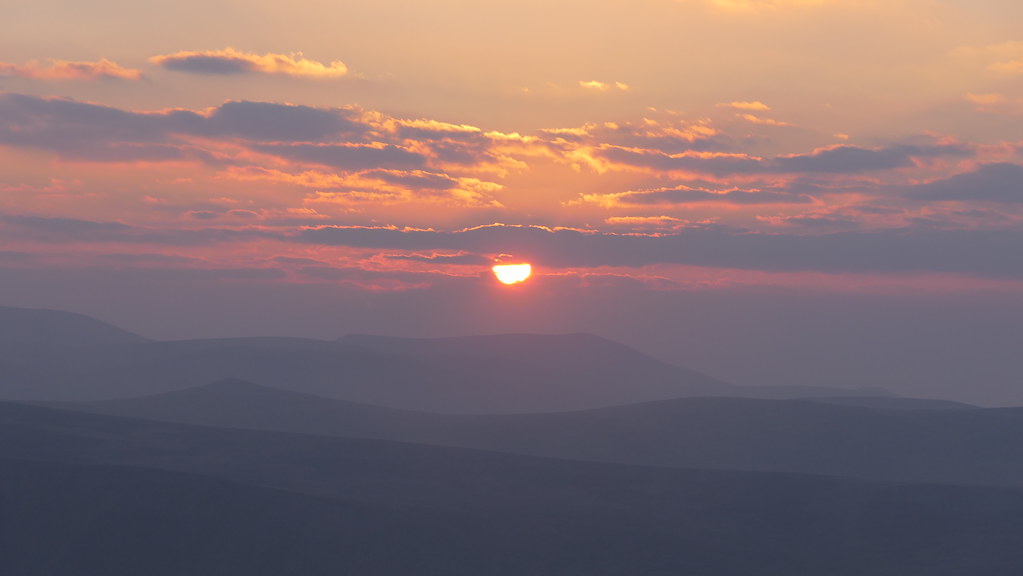 A very poor nights sleep due to the wind. The red grouse were up before sunrise so I decided just to get up and start on the walk. The tent was covered in dew and I'd decided that I would knock off Tom Buidhe and Tolmount rather than Glas Moal as that meant I could return here to pack the dry tent away and descend back to the car. (I had a hard stop of videoing the Atholl Highlanders annual Parade in Blair Atholl at 14:30!)

I was atop the first munro Carn an Tuirc (1019m) before the sun came up, in fact I almost bagged the second munro Cairn of Claise (1064m) before the sun rose. Nice to have two munros bagged so early. 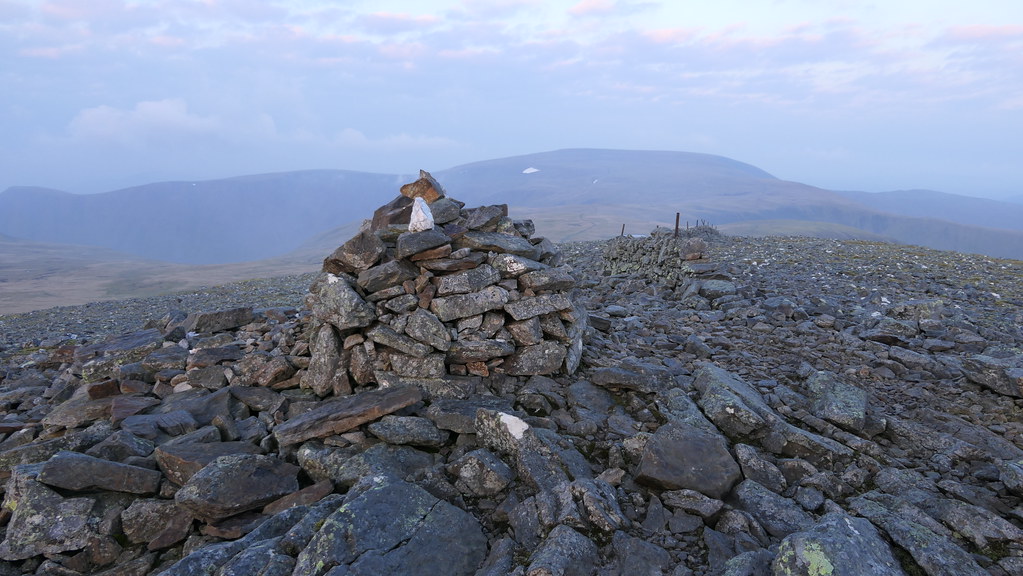 I made a mistake in my route finding heading to a subtop rather than Tom Buidhe/Tolmount so that cost some time. 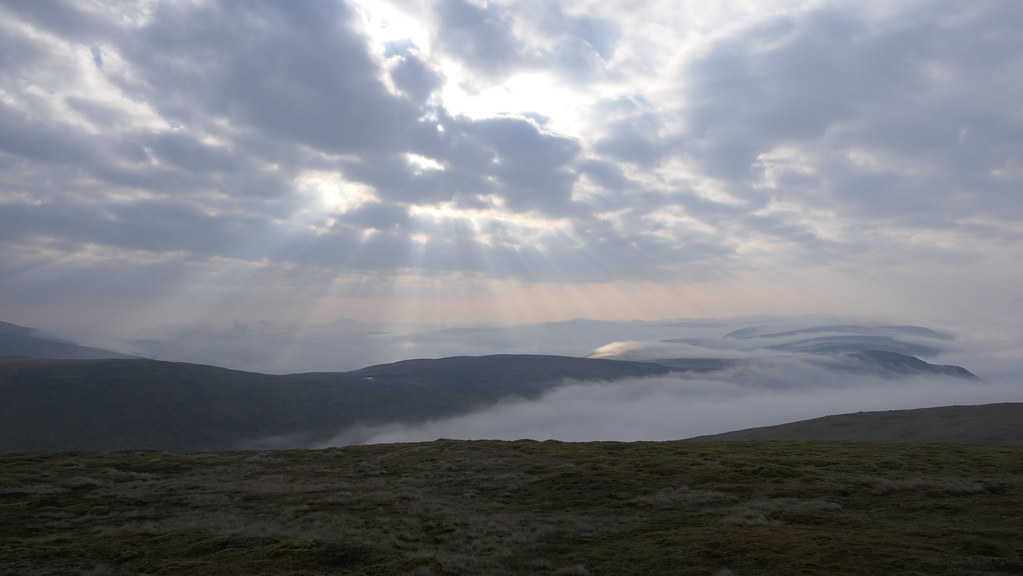 Pano of the shafts of light: 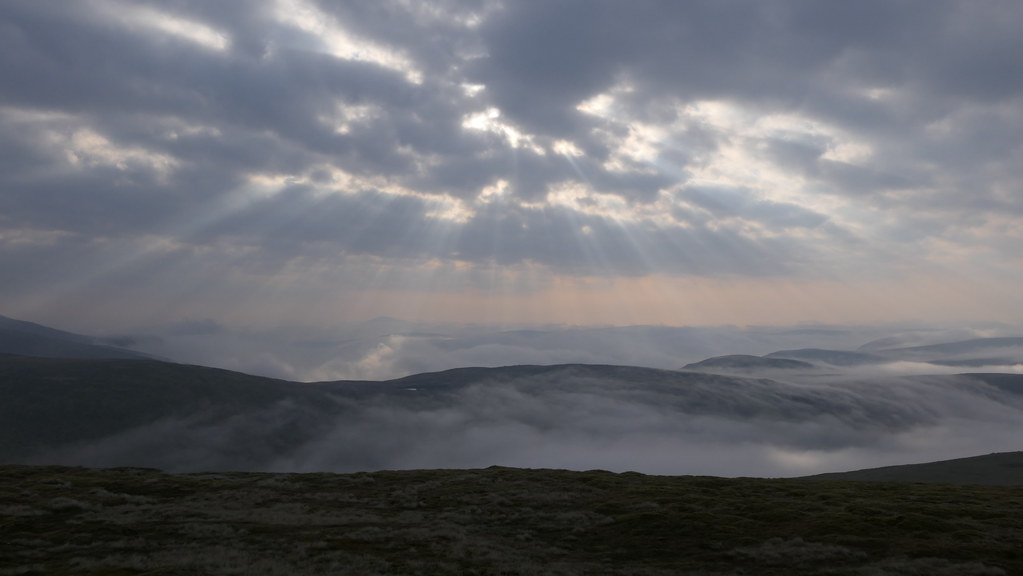 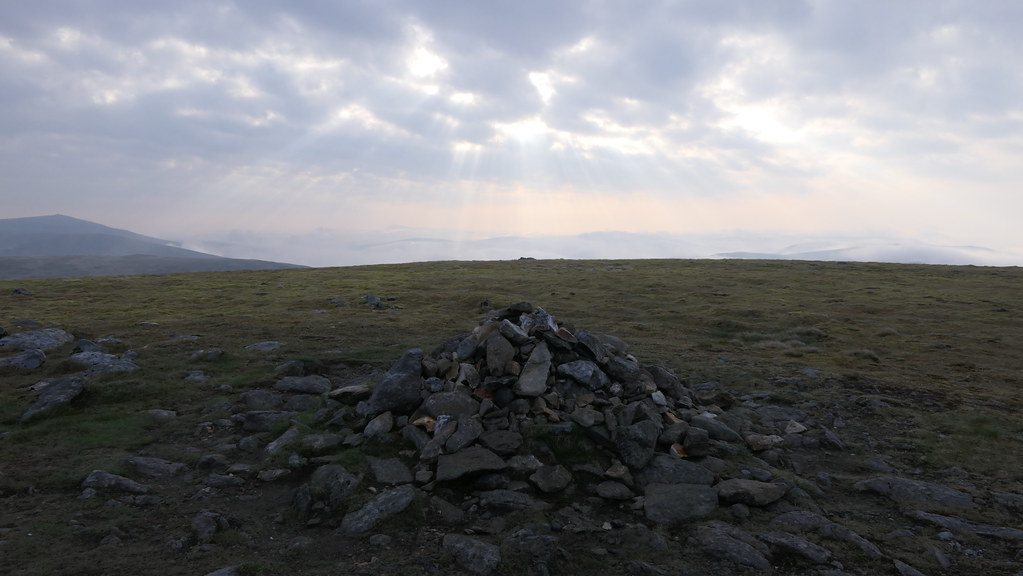 It was a long walk out to these two and back but the views north from them are superb.

Like the previous day, lots of wildlife up here - mountain hares, red grouse (noisy wee buggers woke me up), Golden Plover and a few herd of red deer. 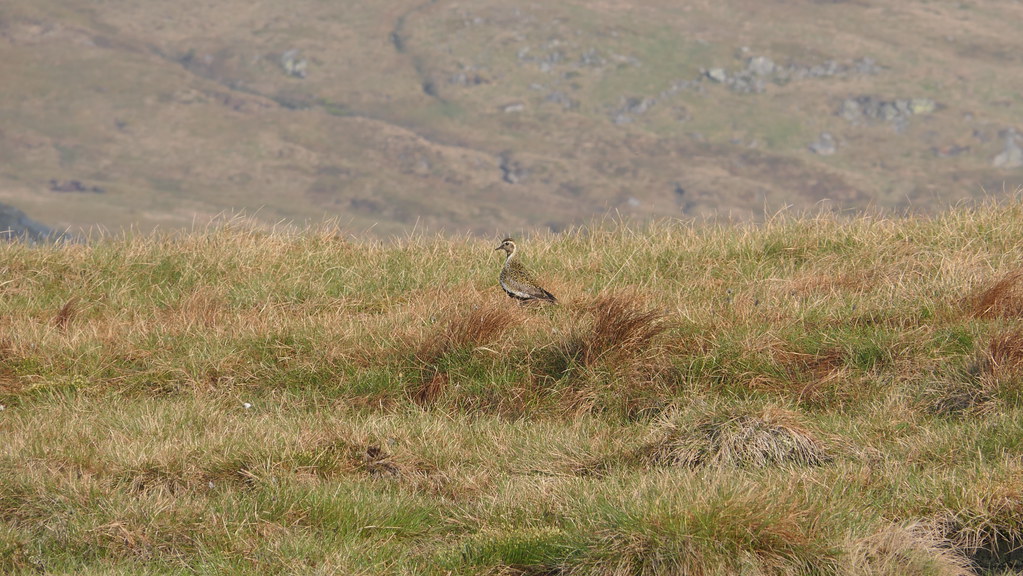 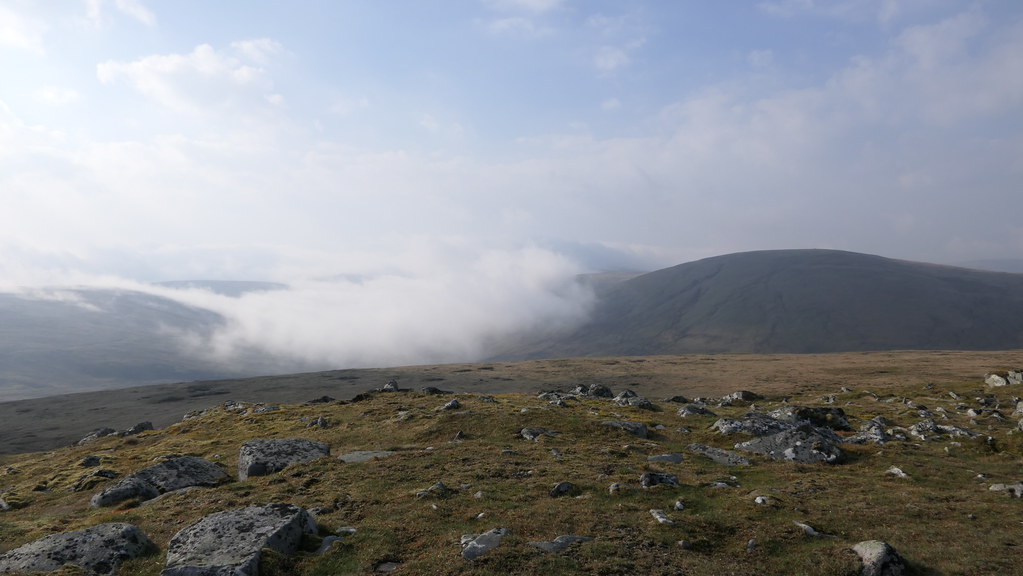 Looking back to Tolmount which the temperature inversion has just engulfed! 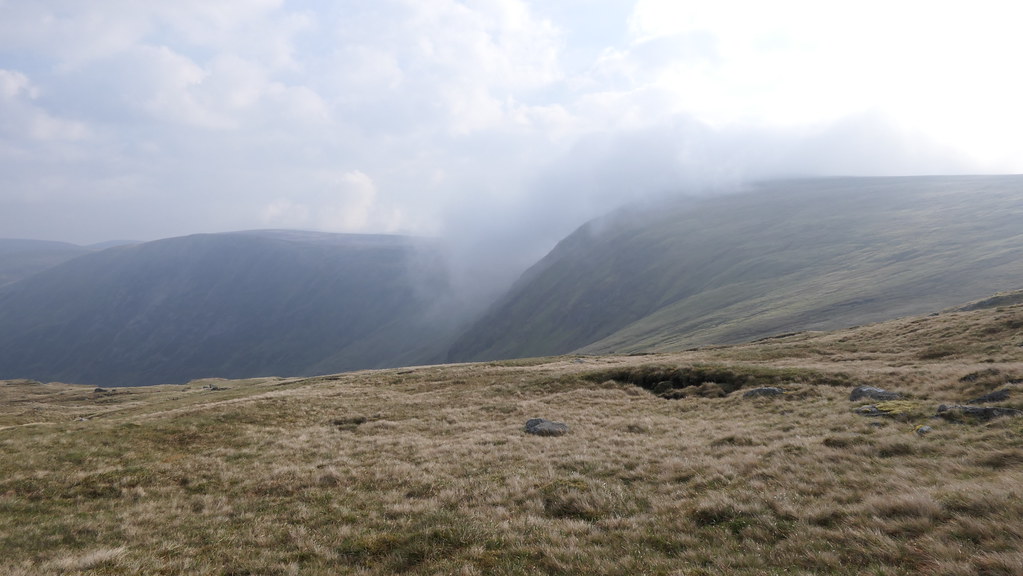 It seemed an eternity to get back to Carn an Tuirc and rather than aim for the top, I skirted around the from. I asked a young couple who were ascending if they had seen a tent and they had just passed it, so I was glad I had to descend to my tent rather than reascend.

I packed the tent up and headed directly to the car and off to Blair Atholl!

Looking toward the car:

Looking back toward Carn an Tuirc:

View to Can an Tuirc from the 1617 feet high carpark - half way there! 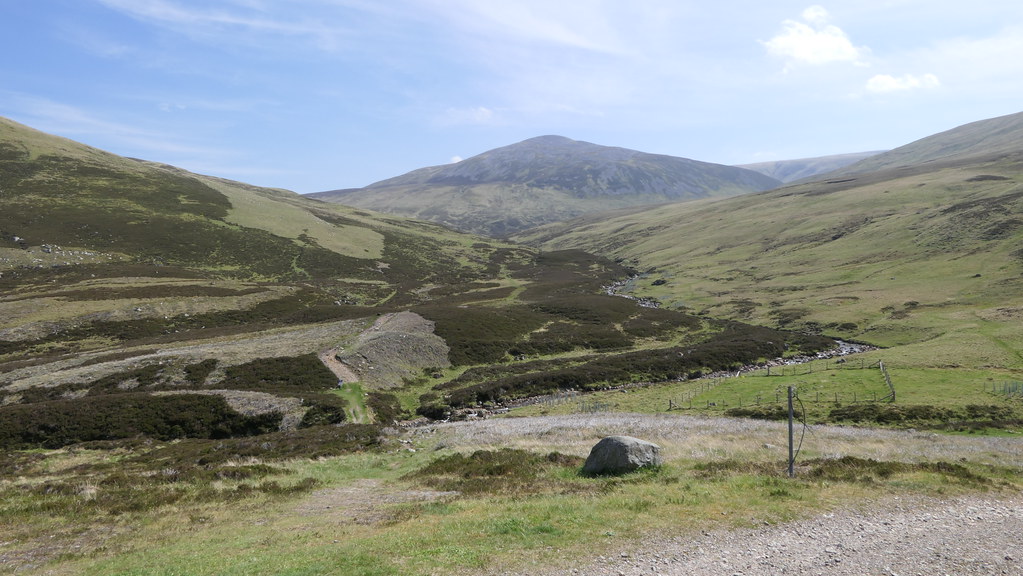