Track_2017-05-26 145416.gpx Open full screen  NB: Walkhighlands is not responsible for the accuracy of gpx files in users posts

The original plan for Friday was to head up to Laggan for Creag Pitridh and its neighbours however work, as ever, got in the way and an 11pm finish turned into a 1am finish so there was no way I was getting out of bed for 6am. I only had one day free this weekend to go do what I wanted so a hasty rethink was needed when I crawled out of bed. I'd always viewed Meall Chuaich as one of those annoying singles who's distance from the house was a waste of time and fuel for such a short walk, in fact I had considered joining it up with another annoying single, Geal Charn at Monadhliath, or leaving it for when I was passing on a weekend journey up north.

However on Friday it pretty much became my only option for a hill walk so I chucked the kit and Mountain Mutt in the car and headed up the A9.

For those heading north on the A9 to get to this Munro take note of this handy hint. Layby 94, where the walk starts from, is actually on the southbound lane so a smidgen of late braking was required to swerve into a handy driveway just to the north of it and turn the car round.

I walked north along the verge for about 50m to the gate into the Scottish Hydro access road. There were lots of sheep about, which I hadn't factored in due to my rush, so I thought Mountain Mutt would have to stay on the lead which would be a pain in the arse (and arm!) as he pulls like crazy when sheep are about. Luckily Scottish Hydro have fenced off the road on both sides so Mountain Mutt could run about crazy without getting near the sheep, something he couldn't quite figure out.

The first three miles are along this road. It's easy going and pretty much flat. It's actually ideal bike 'n' hike territory and if I had planned this a bit better I would've brought the bike. 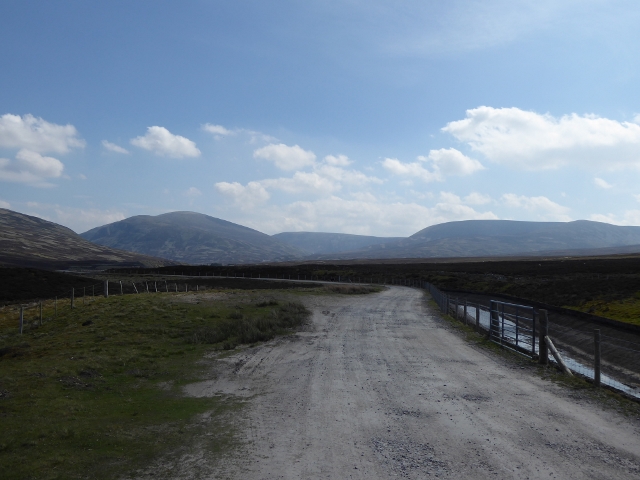 Road in with Meall Chuaich on the left

Just before the power station I crossed the water outflow channel. There is work going on at the station just now so there were occasional vehicles coming and going and no water flowing at all. I kept on following the road and crossed a couple of streams until I got close to Loch Cuaich where I had to branch off to the right. By now Meall Chuaich was right in front of me and the path up was clearly visible. Loch Cuiach from the junction The first bit of the climb was very steep, quite a shock after 3 miles of easy walking. The view behind me was getting very good though and I could see the Ben Alder munros though the gap in the Drumochter Hills. The wind was picking up too which was welcome because in the bowl between the hills the heat had been intense in the still air. 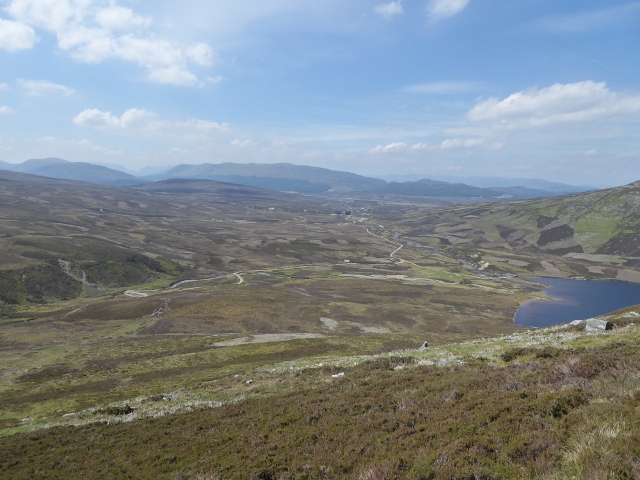 View east with Ben Alder munros in the distance Steep uphill, unless you're a Border Collie

The trail kept life interesting too. One minute it was a bit boggy, the next loose stones, the next dried out earth which was like walking on sand, on a slope, which meant it was quite slippy

Once I was up the steep section the trail leveled out into a gentle uphill before going a bit steeper towards the summit. Still a very easy trail to follow and occasionally the odd Black Grouse would be spooked by us and fly off with that very distinctive and comical alarm call they have. It's like a laughing siren! Path leveling off with summit over to the right Getting closer to the summit I found the trail harder to spot through the rock fields that were appearing. It took me round Stac Meall Chuaich rather than over it and I found there were a few false summits until the huge cairn came into view. It was really windy up here, I hadn't expected that. Ducked behind the cairn for shelter for lunch then took some summit pics. Because It a big flat summit I didn't get the views I was hoping for, and it seemed a bit hazy too. 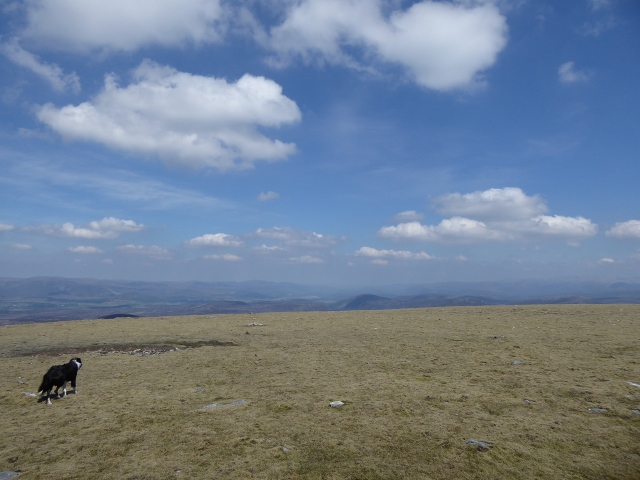 Now it was just a case of retracing my steps back to the car. The bonus was for the whole descent I had the best view around, which was to the east over the other Drumochter Hills and beyond. In 3 hours I was back at the car. It actually took me 5 hours driving all in to get to and from the start of the walk

I was wrong to class this as an annoying single, I actually really enjoyed this short outing and its probably my favourite of the Drumochter munros.

Re: Meall Chuaich - A worthwhile quickie.

Did it this morning as the rain had stopped for a while. I agree it's the best of the Drumochter bunch. Plenty of grouse, hares and the Heather is thick and healthy. I enjoyed the walk in I must say-far better than bumping along on a bike.

Re: Meall Chuaich - A worthwhile quickie.

A wee underrated Munro on a fine day.