Finally... my first trip, at the age of 33, to Scotland after a youth of clambering up hills and fells in Wales and England.

My wife and I did a bit of a tour around the west coast and our first stop was in Glen Coe. Being new to Scotland and my wife relatively new to this hill-walking game, I wanted to make sure we picked walks that weren't too challenging and could be easily reversed if the weather set in.

Glen Coe is no home of easy walks though, but after much consulting of this website and various guide books, we went for the Little Shepherd via the Lairig Eilde and Mam Buidhe.

The weather was reasonable - not boiling nor wet, although we needed both the waterproofs and sunscreen during the day - and we were on the path by 10am. After splitting left from the path that stays in Lairig Eilde (which heads forward to descend and cross the stream), we climbed steadily until crossing the bubbling brook that descends from Man Buidhe. The subsequent climb was then pretty steep but the path restorers have done a great job. There are steps most of the way up, otherwise I think the route would be pretty tedious, and we were able to make steady progress. Although the Munro tops on our walk had now disappeared from sight, the view across to Stob Coire Sgreamhach and Beinn Fhada was superb. Reaching Mam Buidhe gave us an opportunity to grab a bite to eat. After lunch, we continued towards Stob Dubh, climbing steeply up at first with good views to the second Munro of the day, Stob Coire Raineach, and Big Brother across the Lairig Gartain. Once the first top was reached, the delightful ridge to the summit of Stob Dubh stretched out in front of us. 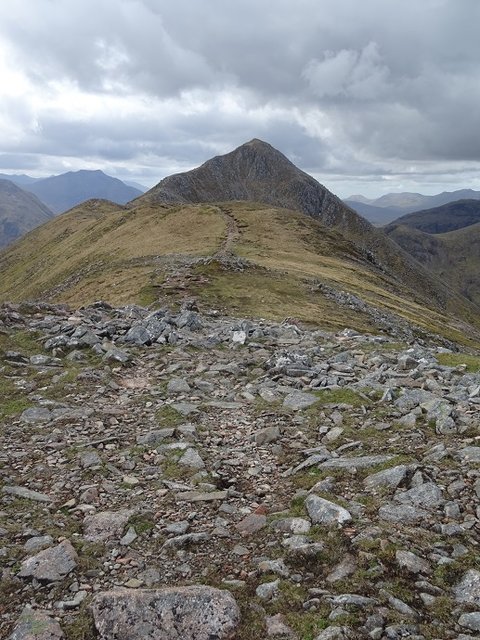 One final pull up the narrowing ridge and we had made it to the summit of our first Munro. As we approached the top, a group coming down advised us to carry on past the summit to the subsidiary top for a great view. It was well worth the extra 100 yards as Glen Etive suddenly extended out ahead. The return back to Mam Buidhe was simple enough. However, the pull up to Stob Coire Raineach was tough going on rough paths and with the wind picking up but we made it with no drama. Now the views brought in Rannoch Moor and a closer look at Ben Nevis across the Mamore ridge. Descent was by the same route and simple enough. The steps down from Mam Buidhe were tiring on the legs, but still preferable to a loose path. Aonach Eagach displayed all its notchiness on the other side of Glen Coe. As we came down the weather closed in a little and we felt a few drops of rain, although not enough to get the waterproof trousers out. Still, by the time we returned to the car Buichaille Etive Mor was being hit by squalls of rain. My hopes of driving over to Rannoch Moor to take some pics of its famous face was thwarted - this was the best I could get Frustratingly, the rain was very much located on the moor and the drive back was otherwise completely dry. Never mind, it didn't stop us enjoying a well deserved dinner and celebratory whisky that evening!

Well done.
Glencoe is beautiful, awesome, spooky, mean jaw dropping ..........
Hopefully you get back sooner than later.
I go through quite often and every time I stop and have a look at Stob Dearg
Every time it throws up a different picture for me

Coop wrote:Well done.
Glencoe is beautiful, awesome, spooky, mean jaw dropping ..........
Hopefully you get back sooner than later.
I go through quite often and every time I stop and have a look at Stob Dearg
Every time it throws up a different picture for me

Thanks Coop. It certainly is impressive, hard to find a "simple" walk to do! Look forward to being back again soon although there's so much to explore in Scotland and only so much free time to travel up there.