We’d been wanting to climb Foinaven for years and when Walk Highland produced an alternative to the very long route from Achfary already described in other well-known guides, it seemed a good time to try. We are both approaching 70 and live down south so stamina is a real issue for us these days and we approached Foinaven with some trepidation.
After an early breakfast at our B&B in Kinlochbervie, we were parked in the small quarry just north of Gualin House by 8.45 am. There was already one car there and another arrived as we were getting ready, pretty much filling the available space before 9 am on a Sunday. The mountain looked a long way off and I was already wondering about the return route across the watery ground in front of us. Ceann Garbh from near the start of the route

It’s a bit depressing to lose so much height on the descent into Srath Dionard at the start of a walk but we made good progress up the valley reaching the 4 mile wooden marker post after 1 hour 20 minutes. The valley looked lovely on a sunny morning. Shortly after the marker post, we left the track and headed diagonally across rough ground towards the Allt Coire Dùial. We picked up a thin path near the burn, which became clearer as we gained height and took us all the way to the lochan where it petered out, not to be seen again. The lochan sits in an imposing circle of cliffs, as impressive as many better known lochans, llyns and tarns elsewhere. The onward climb was long and unremittingly steep, only relieved by frequent pauses for breath and the grandeur of the surrounding rock scenery. Eventually, a bit more than four hours after starting out, we hauled ourselves exhausted onto the top of Ceann Garbh. It seemed a good time to stop for lunch. Afterwards we were able to fully appreciate the marvellous view with the real summit, Ganu Mòr, beckoning across the corrie. Refreshed, we were able to really enjoy the short walk round to the top of Ganu Mòr. We were expecting similar terrain to the boulder-hopping tops of Cranstackie and Beinn Spionnaidh across the valley, which we’d not entirely enjoyed the previous year, but the going turned out to be surprisingly smooth. Once on Ganu Mòr the view along the rest of the Foinaven ridge opened up to the south-east. Lord Reay’s seat and the A’ Cheir Gorm ridge looked interesting but we weren’t inclined to go any further in that direction. 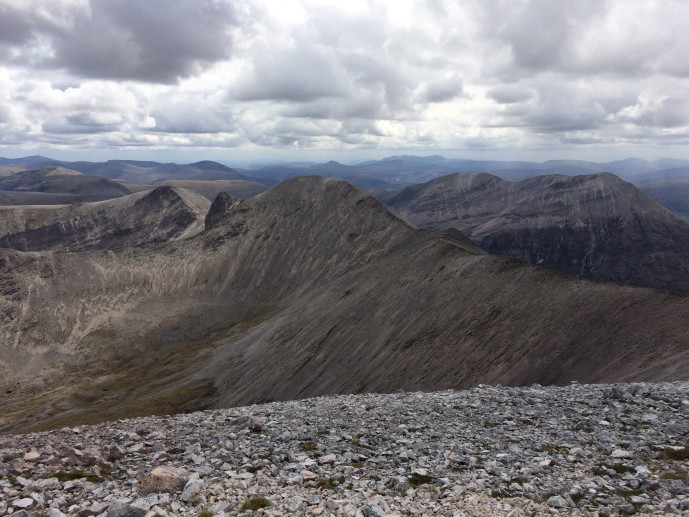 Looking back to Ceann Garbh from Ganu Mòr

We retraced our steps almost to Ceann Garbh and started down the steep bouldery slopes beyond. We probably went a bit further to the left than necessary but we avoided all of the crags and had plenty of opportunity to plot a course across the lower ground back to the road. I was grateful for the clear visibility. Luckily for us the weather had been largely dry for several weeks prior to our walk so we didn’t encounter too much in the way of bogs on the last stretch and any deviations were sideways rather than backwards. Looking back at the descent route

On reaching the car, I was surprised to find that we’d only taken about eight and a half hours to do the route without hurrying at any stage and including stops. The guy in the third car to arrive at the parking space had overtaken us and disappeared long before.
In the evening we drove out to the beach at Oldshoremore. It looked fantastically beautiful in the soft evening sunlight. It’s that combination of mountain and sea that’s unique to the far north-west of Scotland and keeps drawing us back even though it’s a 600 mile drive from home. The small mountains in the north are such amazing shapes and I love the pictures in your report, welll done on the time, I am sure it took plenty of stamina in that sunshine. We have only admired Fionaven from the road but definately hope to go up one day.

Not seen a report from that direction before, that corrie looks wonderful. Thanks for sharing. Quite like the idea of continuing and dropping of over A Cheir Ghorm. And then a bit of a loong walk out...

Enjoyed that, with some great photo's thanks

I have a vested interest in reading up on Fionaven as I am planning/hoping to tackle her next month over the WH meet weekend. Am hoping to use the 2 car route and go straight across SW to NE or the other way, will need to assess

Well done. I recall this as being a fairly demanding day when I was in my mid thirties and that was possibly a slightly easier walk I had too as I went up and down that same way via Strath Dionard. You got a great day for it anyway.

One I've always wanted to do, passing it often, but the corrie looks superb, what great day you had too

The forgotten Munro according to two independent sources in Kinlochbervie