Darren, Laura and I met at Glen Brittle campsite on Saturday evening; the weather was beautiful after a day of rain and we enjoyed an evening together, Laura being the sensible one getting to bed early and Darren and I staying up discussing politics until I decided we would fall out if we didn't get to bed.

I slept well in my tent and was up bright and early, happy to see that it wasn't raining and that the clag on the Cuillin was slightly lifted

Looking out to sea

By the time we had all made it to the mountain hut to meet Lynne and Paddy I was absolutely buzzing, much to the amusement of the others who all joked about wanting some of what I’d had

However it was not to be; high winds and deteriorating weather forecast called off the Pinn, rendering it inaccessible

Very disappointed, Darren and I headed for Sgurr na Banachdich and the ladies headed for Sligachan thinking of Corbetts.

Windy but not raining, we drove a mile up the road, booted up (as if the others thought I was going up the in Pinn in my pink trainers

) and set off. The route was simple, following the path we enjoyed views of some nice waterfalls... 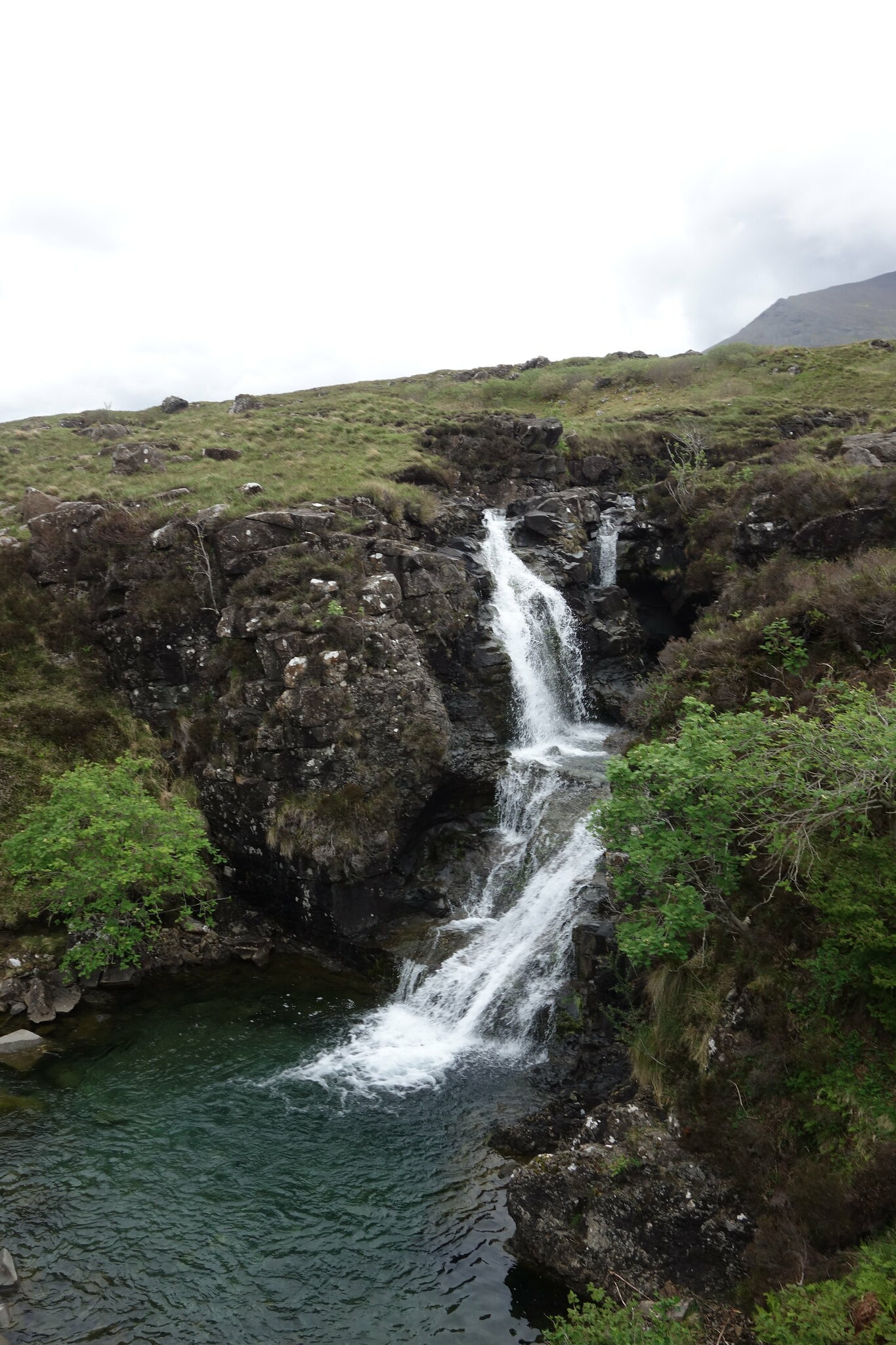 We were even hopeful of the clag lifting slightly ahead... 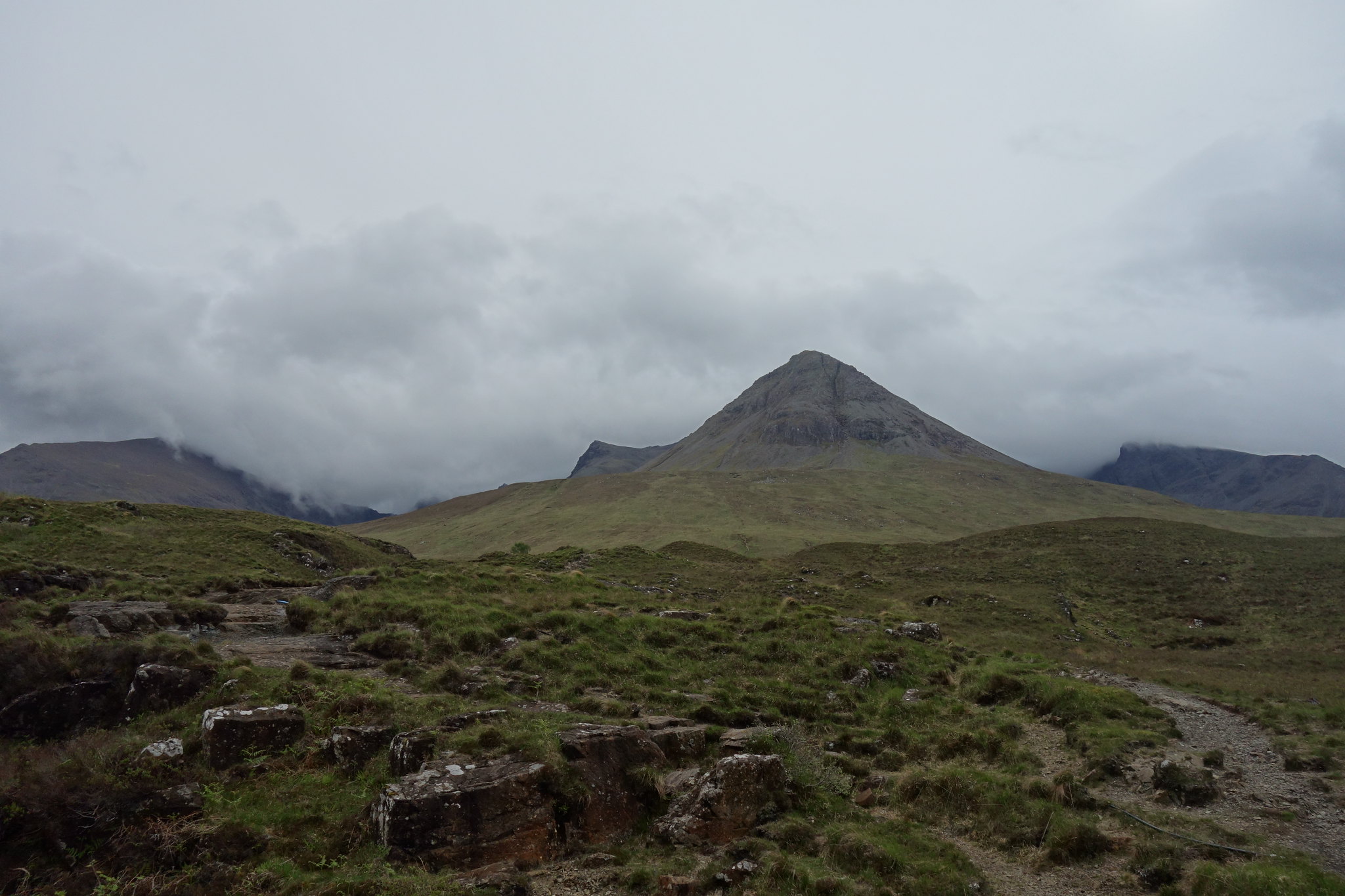 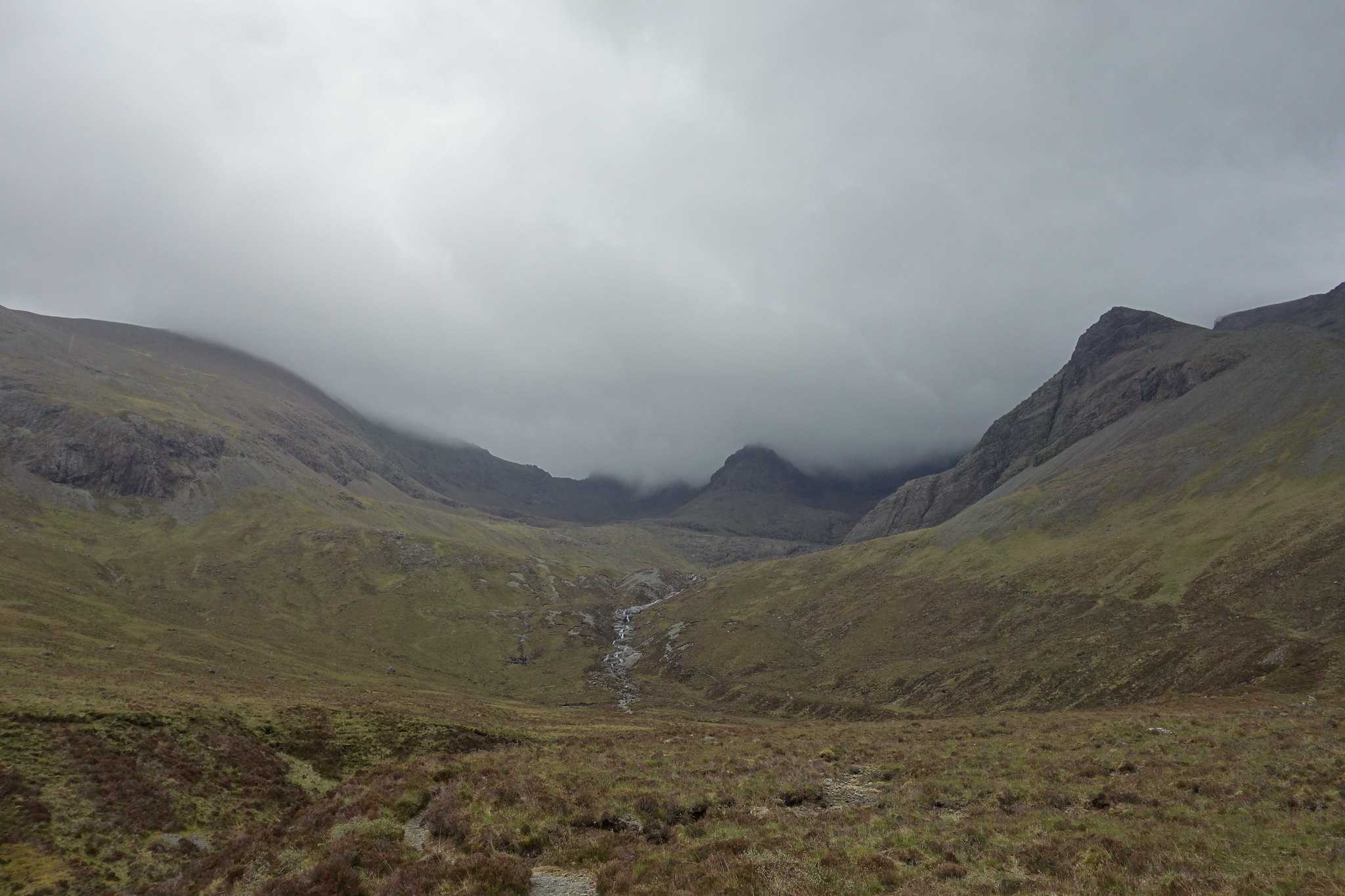 Despite being shrouded in mist, these mountains are incredibly impressive and I was excited to finally make it onto the Cuillin ridge for real 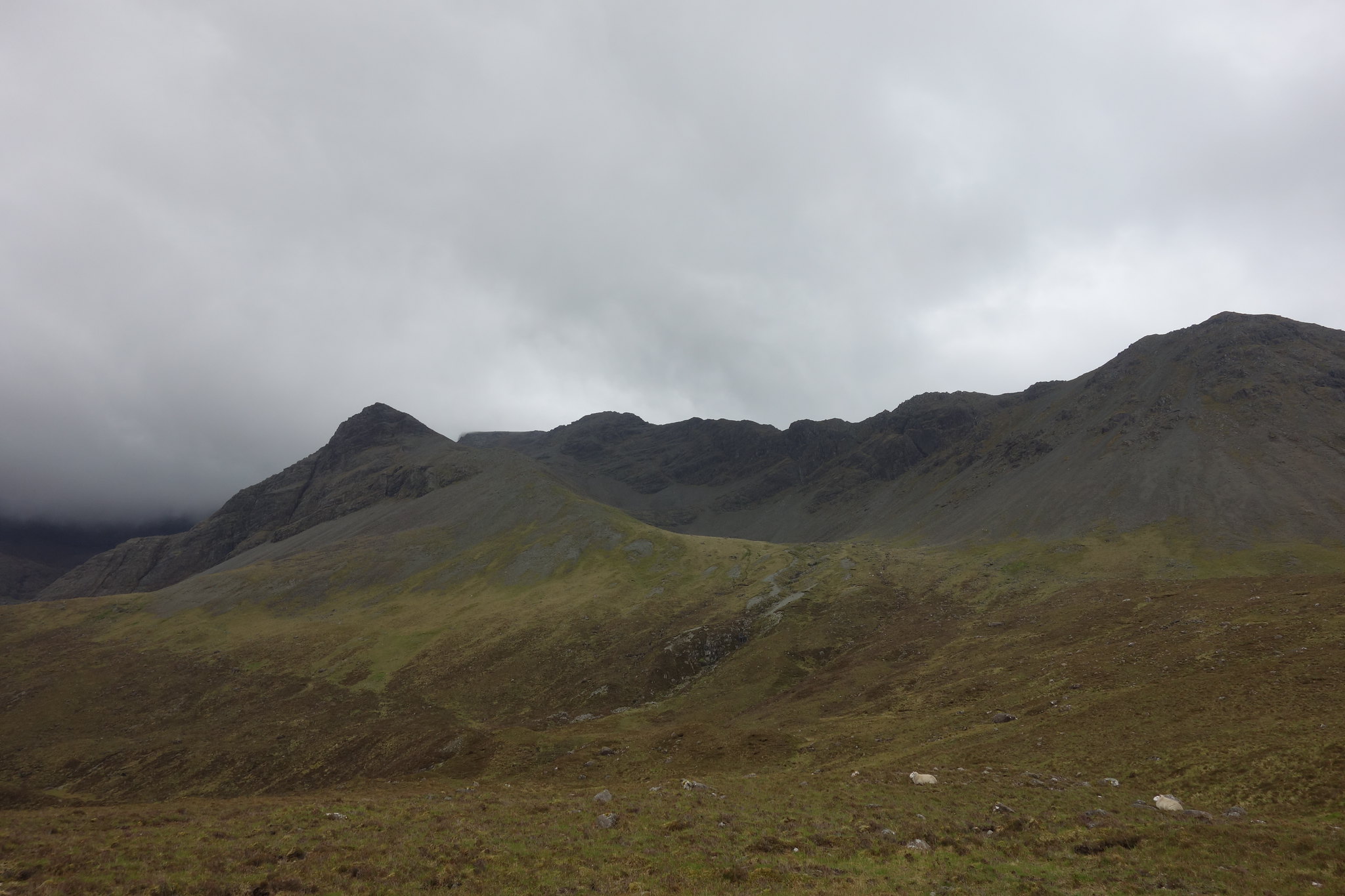 We spotted the fainter, muddy path heading off into Coir an Eich and followed it. It was one of those paths that you both love and hate - has you huffing and puffing like a steam train but my goodness do you gain height quickly

Looking back to Glen Brittle it looked positive 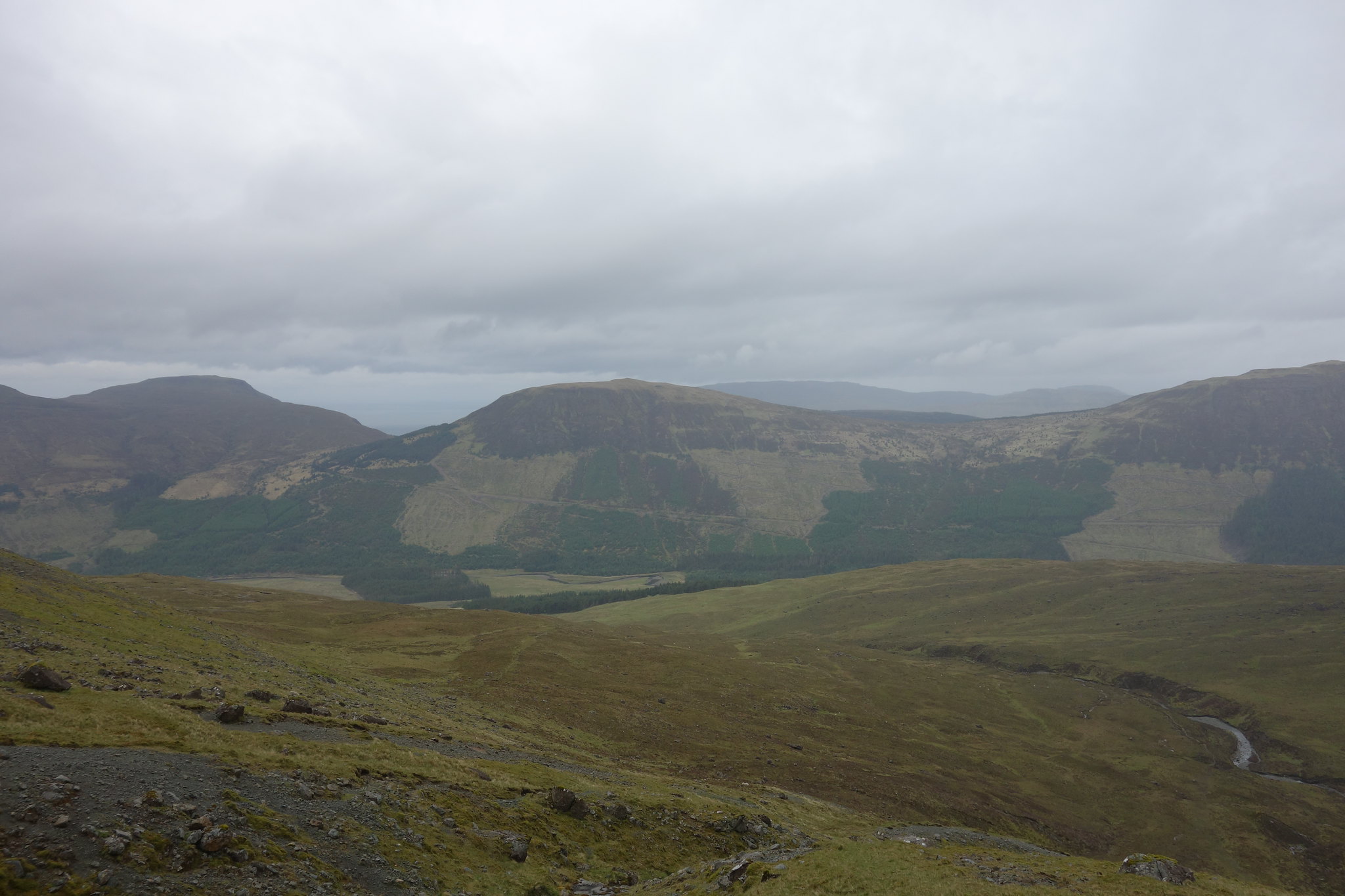 Ahead; Coir an Eich 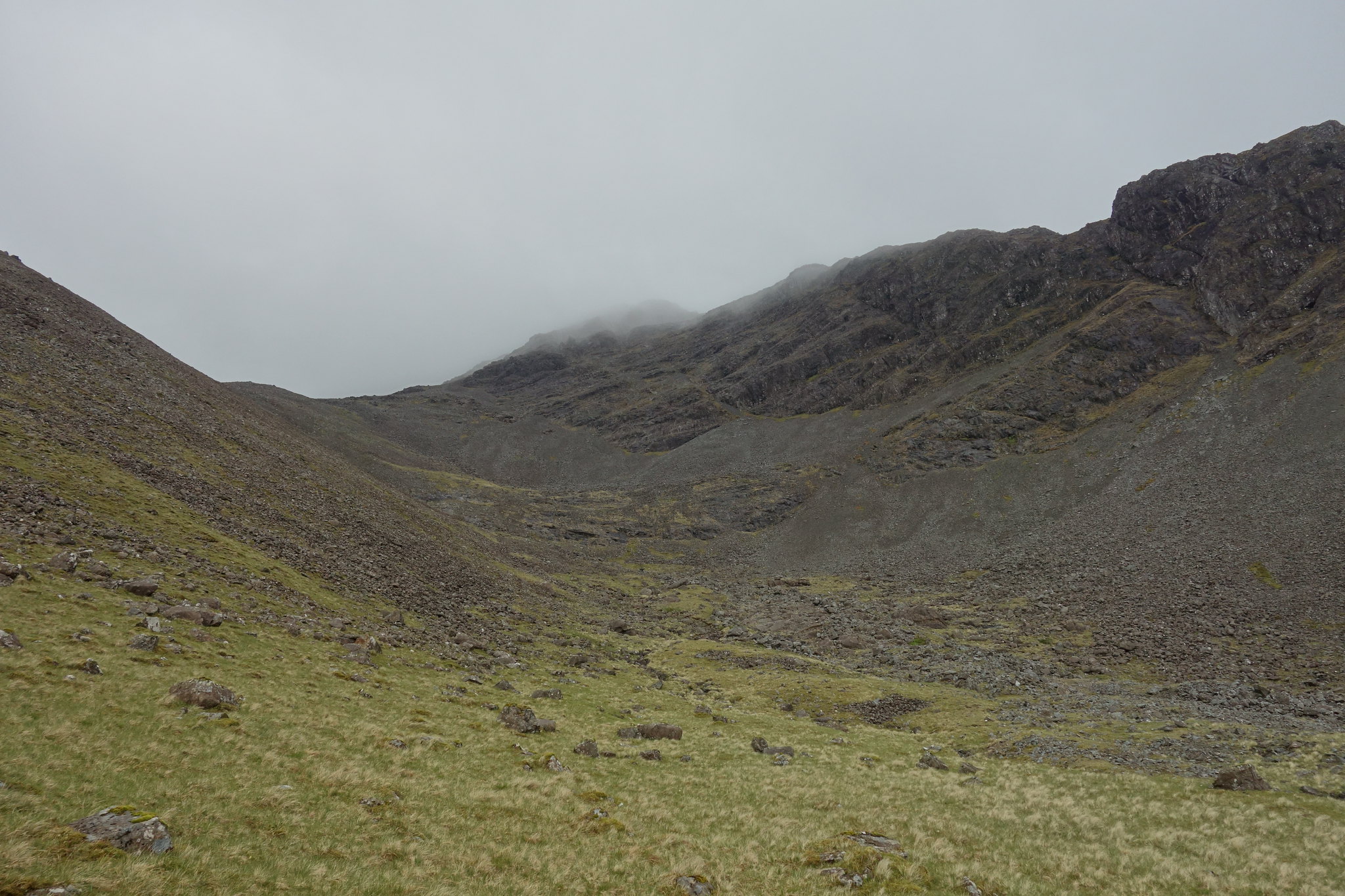 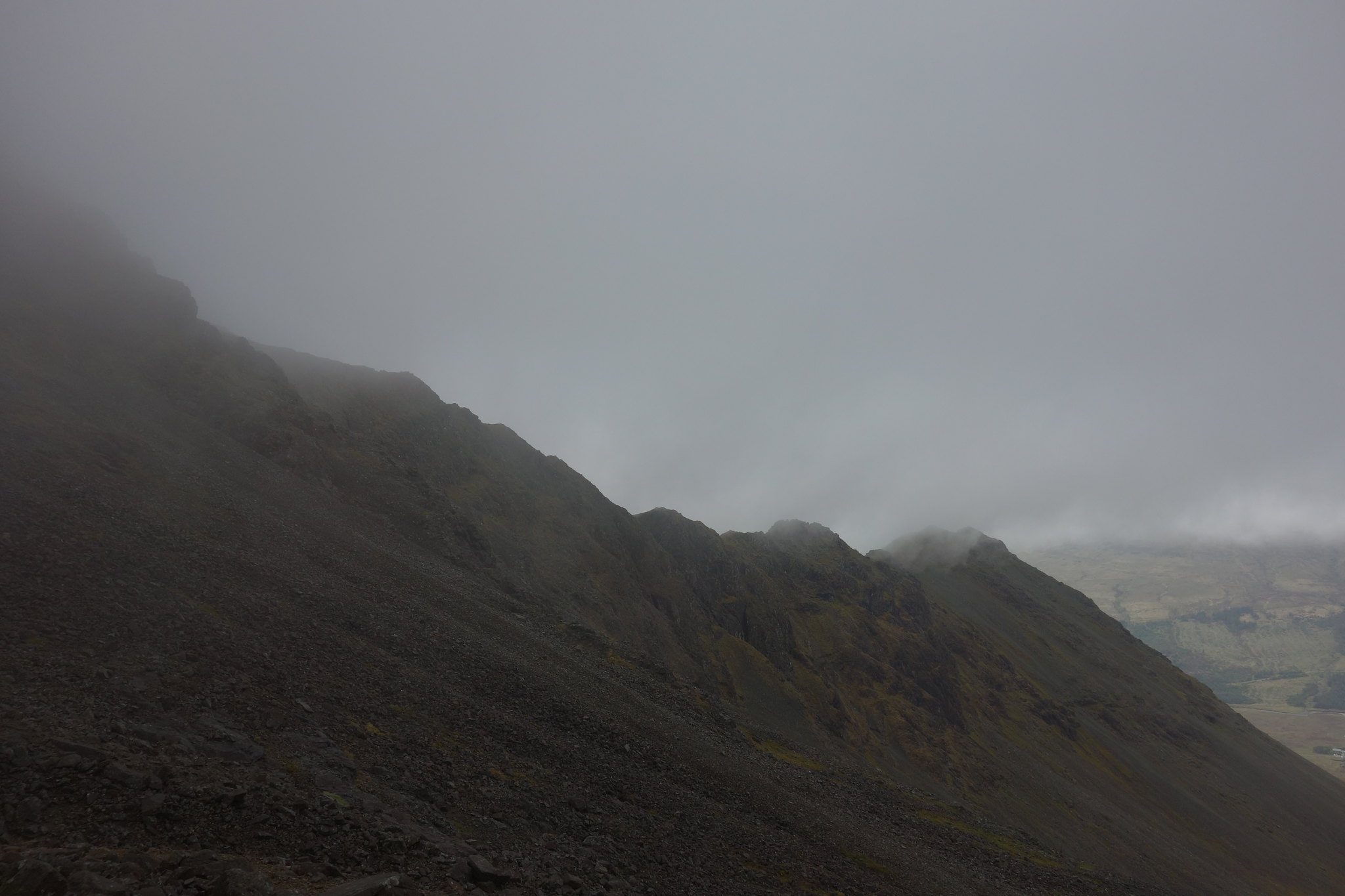 Back down Coir an Eich 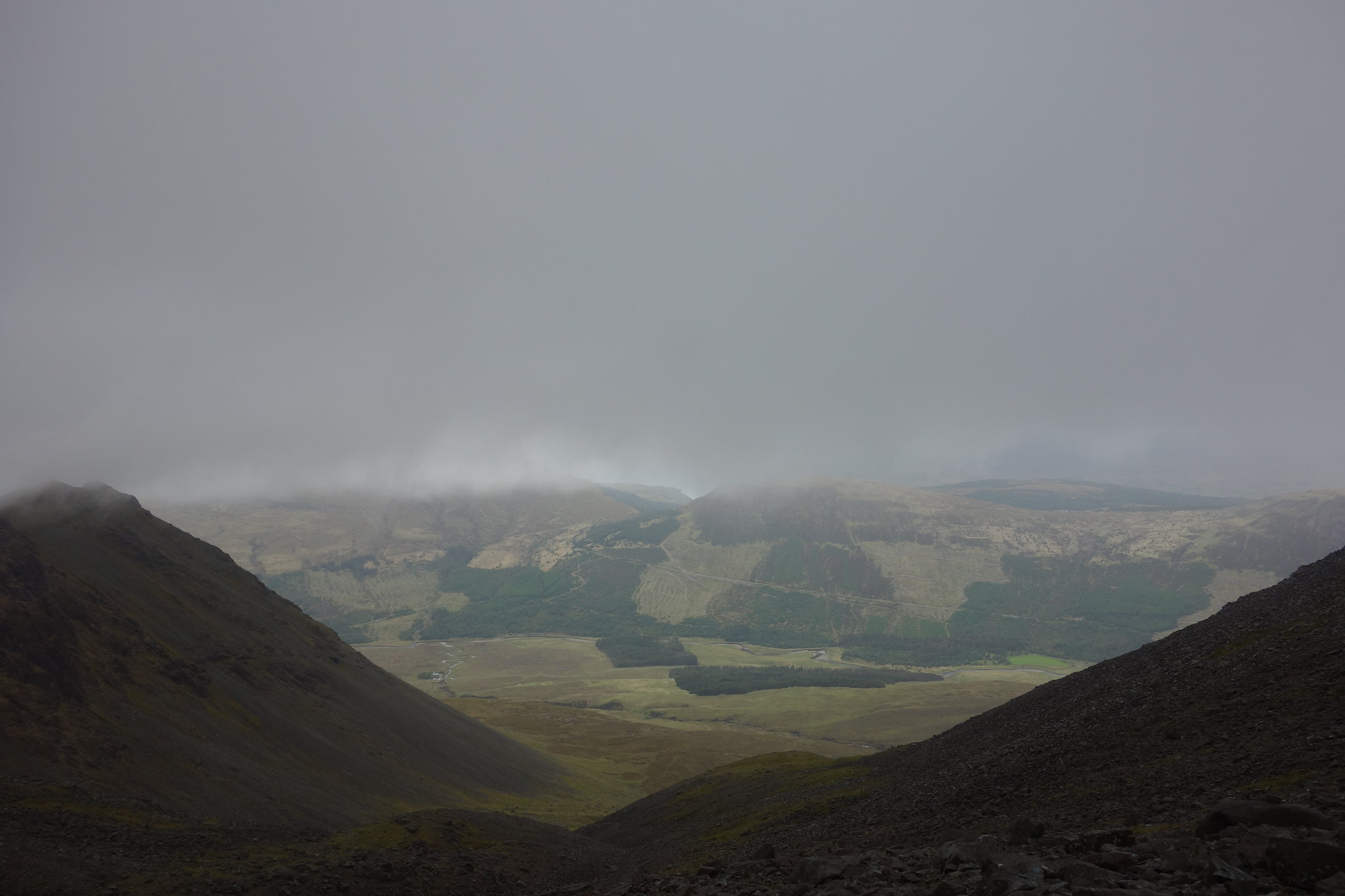 We were fairly soon into the clag however, and it was lowering now rather than showing any signs of clearing. As we climbed higher the wind became stronger too.

The path led us higher into the coire; it was a largely slippy scree and rocks and very steep and we slid around a bit as we climbed. Finally it flattened out slightly and we were on the Cuillin ridge for real! Couldn't see a thing but absolutely buzzing anyway 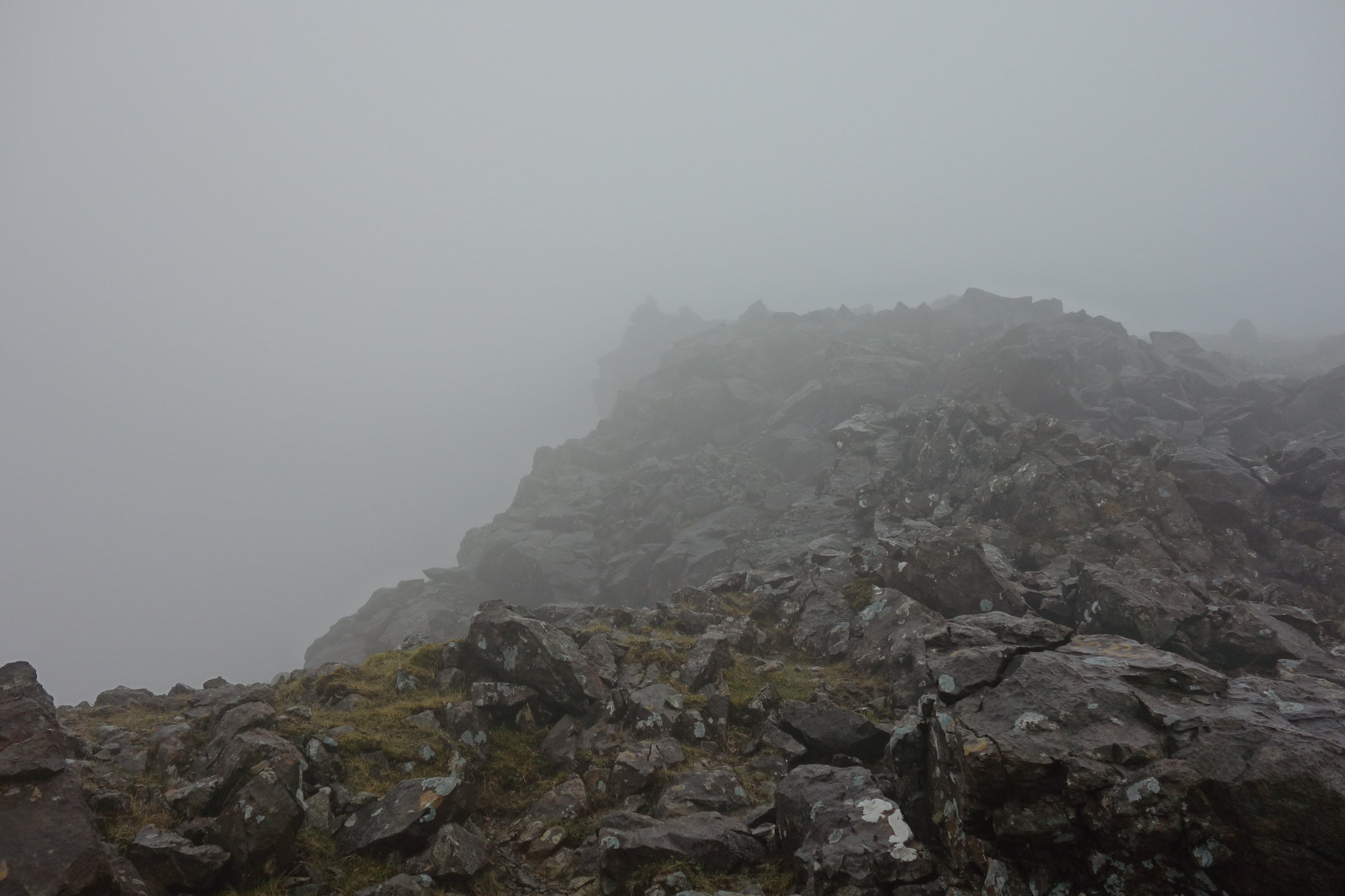 From here we turned right and followed the ridge along. It wasn't remotely scary here, in fact quite wide and easy to follow the path in between rocks.

Suddenly the rain that had been threatening began in earnest and we ducked behind a large rock to get waterproofs on. From here it was a relatively easy climb upwards although the wind had picked up significantly. We met 3 people who seemed somewhat confused and headed down...we weren't sure if they'd given up or just gone the wrong way but soon after we made it to the summit. We actually wandered a few metres further along to what turned out to be an outcrop with a big drop so we were happy that the cairn was actually the top!

Feeling daring as I couldn’t see the drop 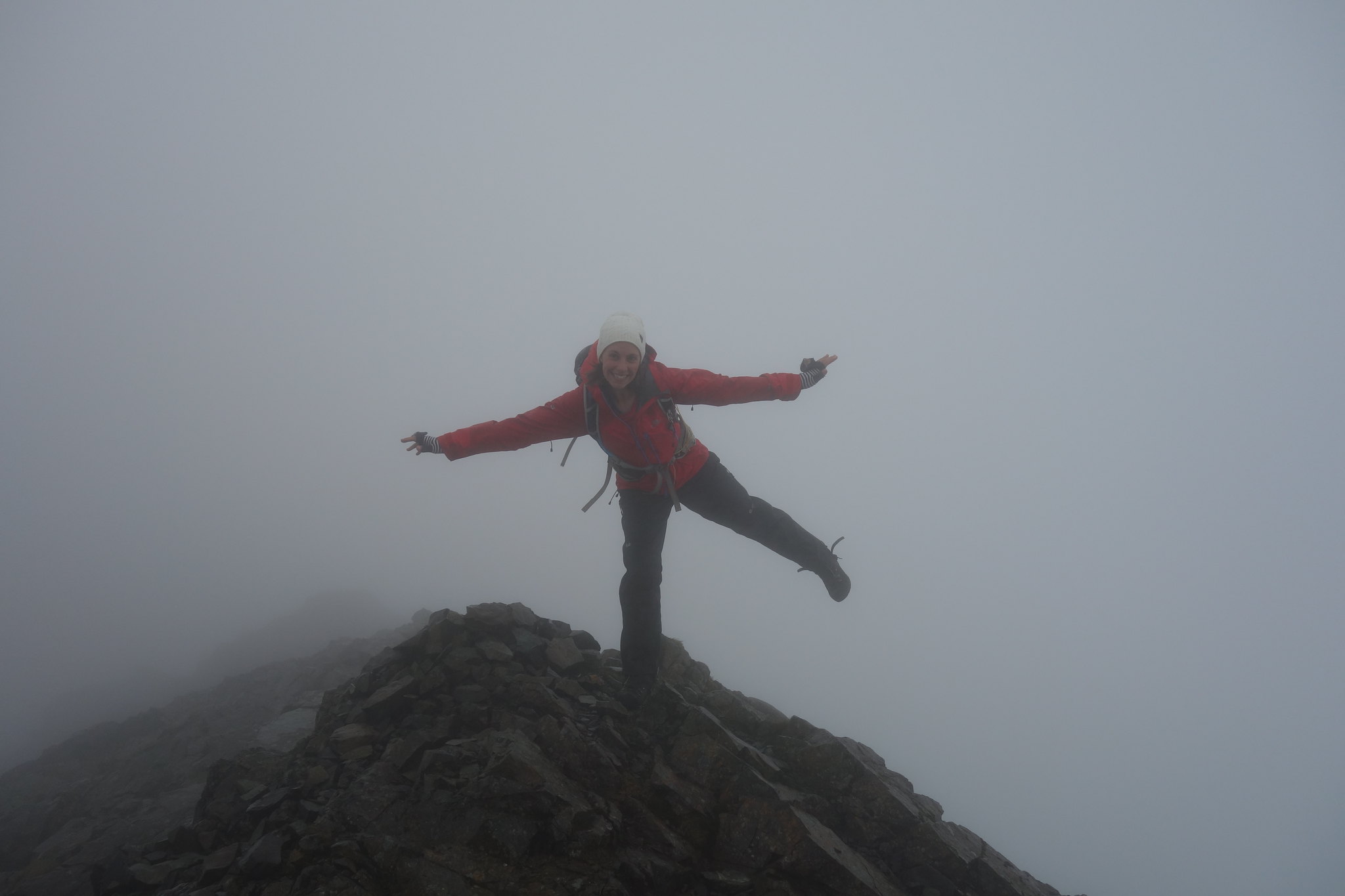 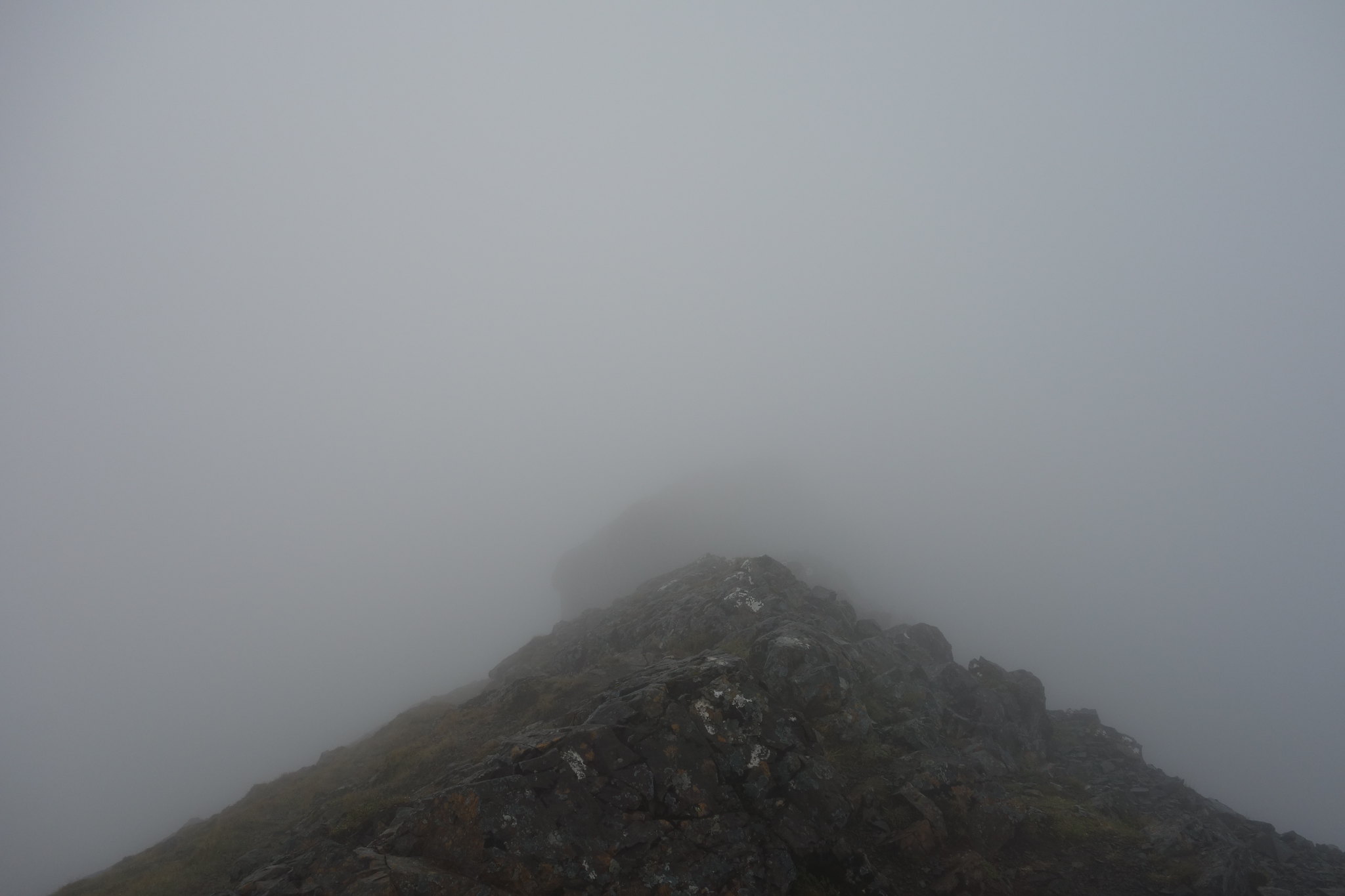 After a few photos we decided that there were no views and no prospect of that changing so it was time to retreat to the Slig for lunch and to see where Lynne and Laura had ended up. 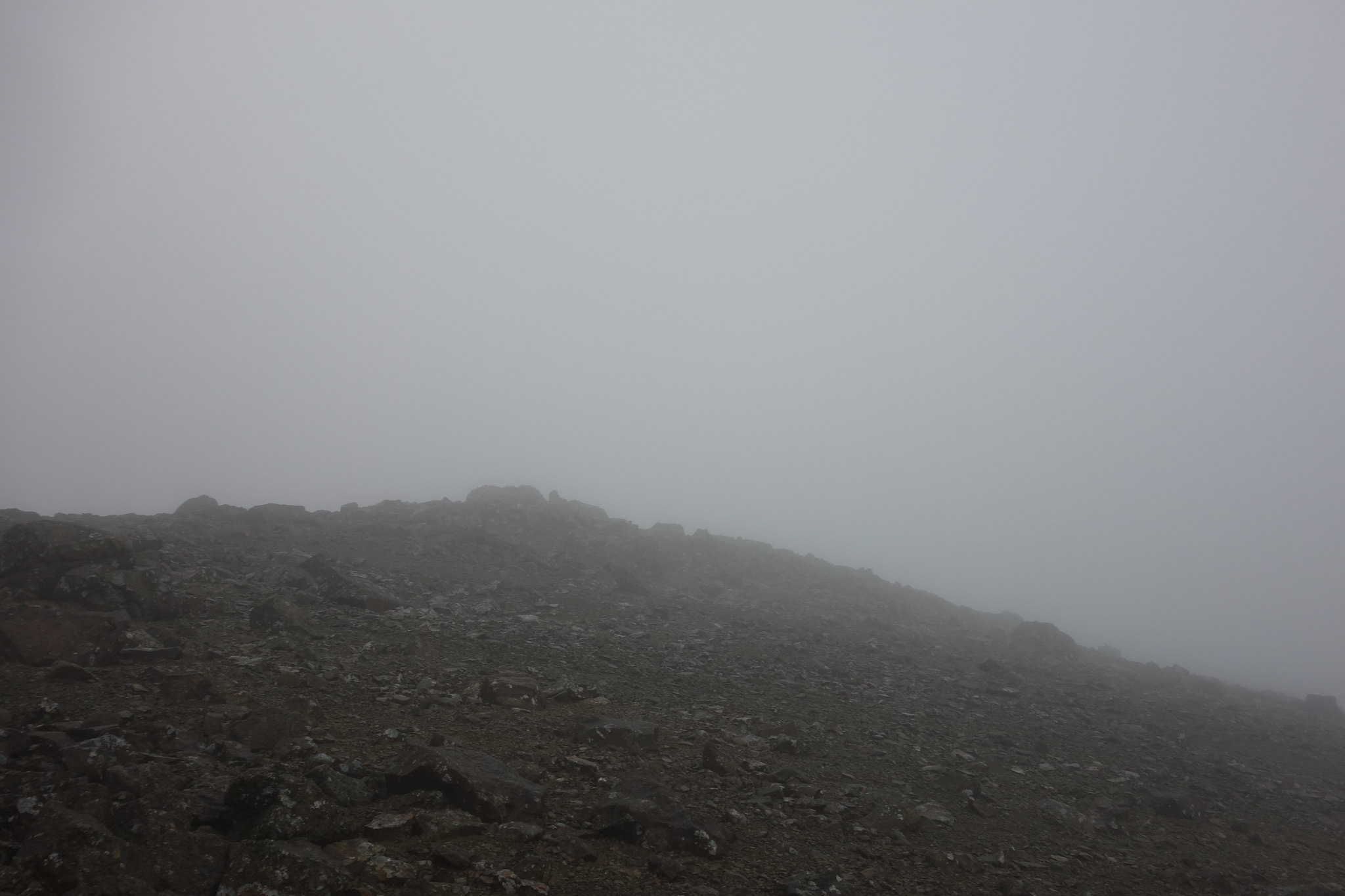 As we descended, the rain got worse but reaching the coire the visibility had slightly improved. 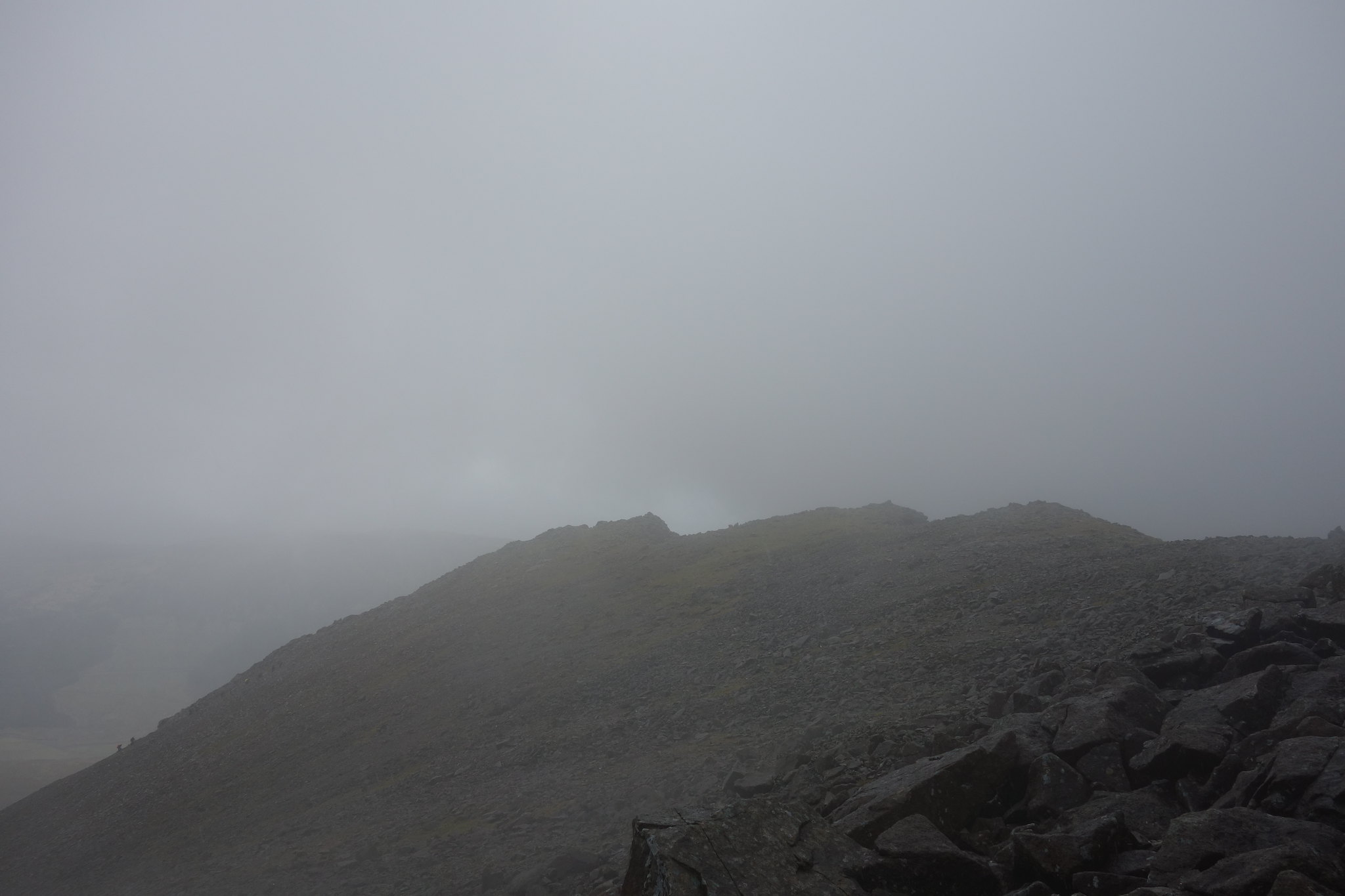 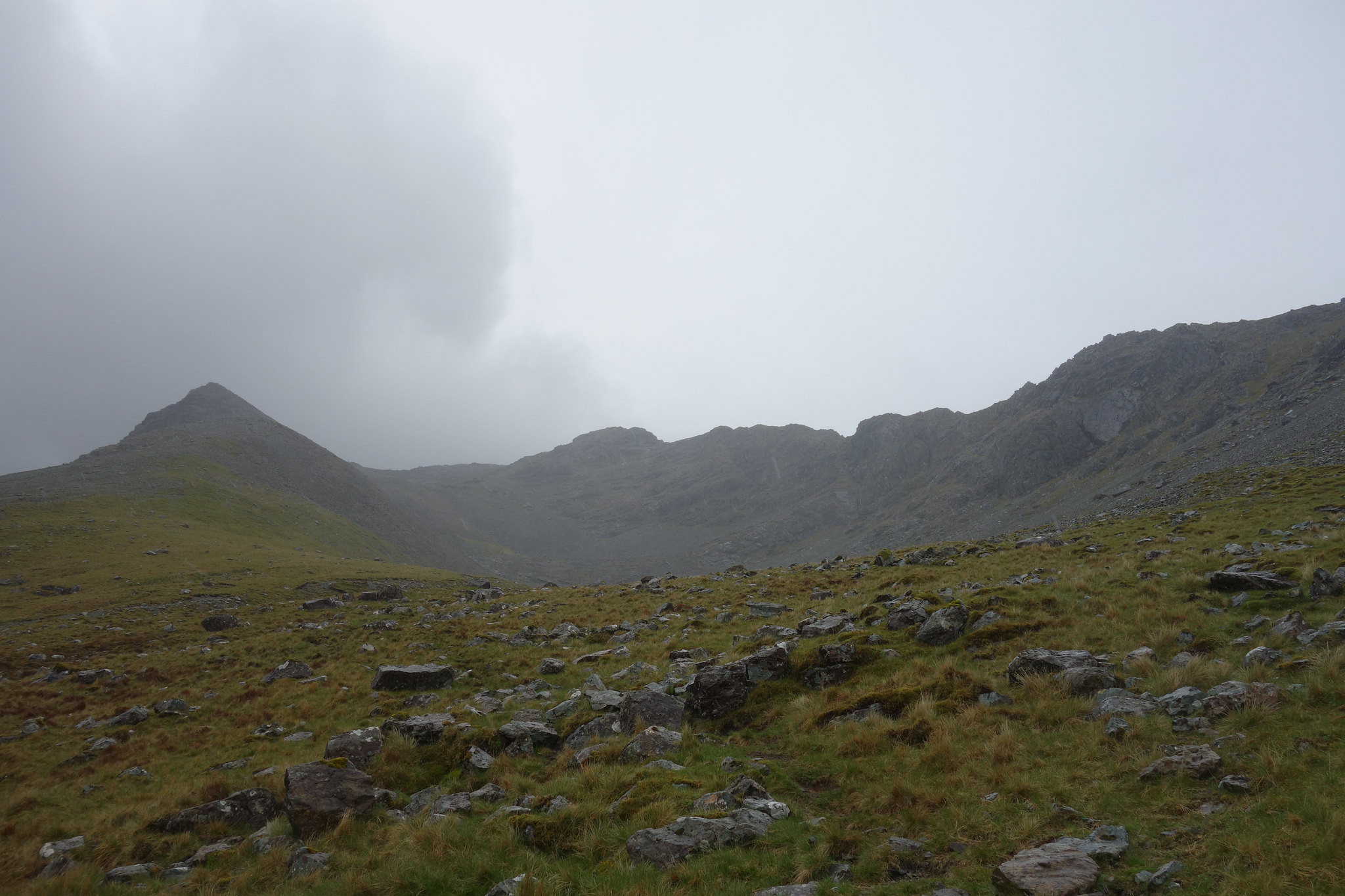 We joked about going back up in case it cleared but carried on down! By the time we had reached the bottom the rain was horizontal and I discovered I'd forgotten to patch a hole in my waterproof trousers so had a wet knee

Glad I'd been up, but also glad to be down, we headed for the Slig where I had a guilt free mac and cheese and sticky toffee pudding as we all caught up on our mornings adventures. As we poked our heads out the pub later on we saw it had turned into a lovely evening 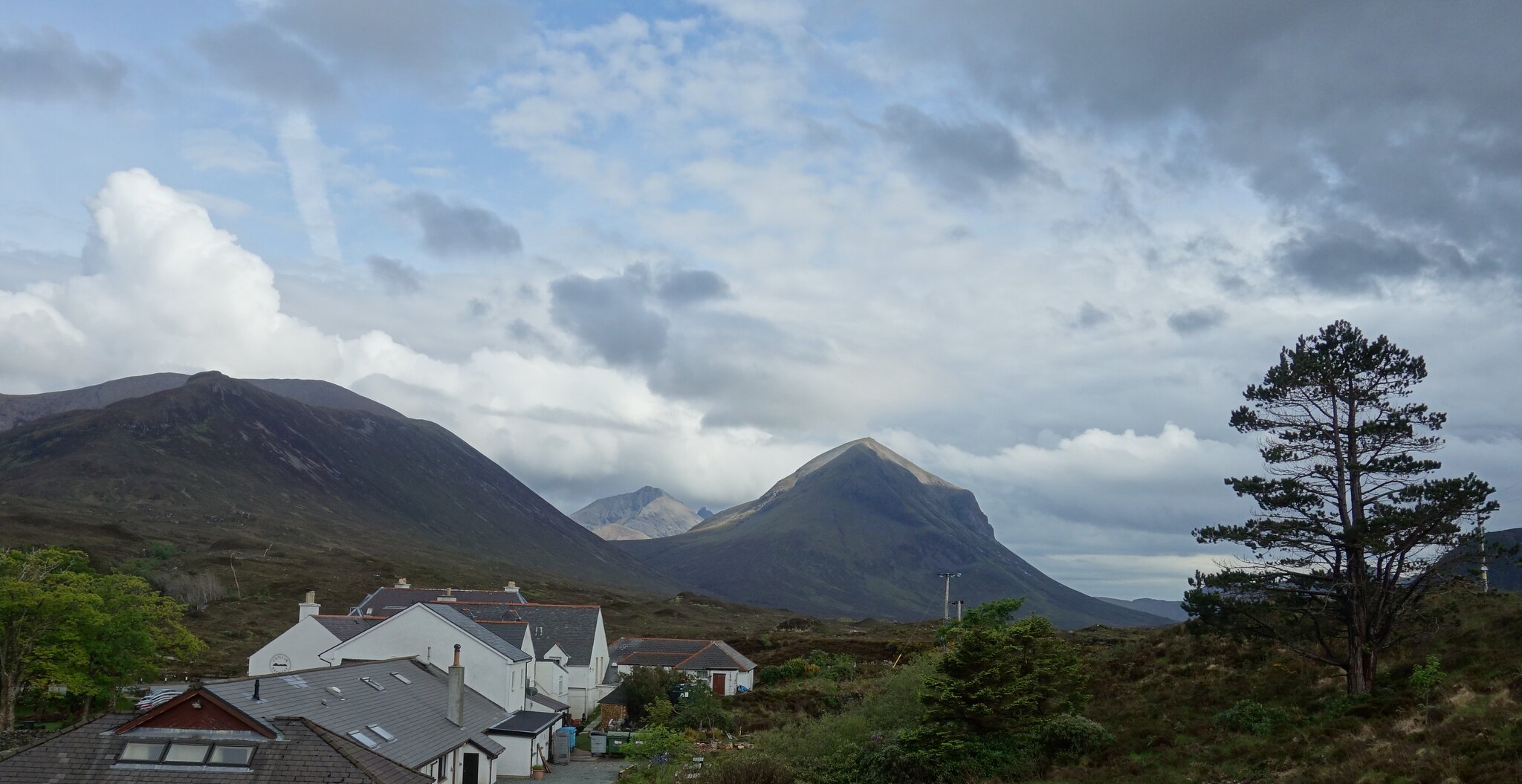 Skye really is a wonderful place

Banachdich.gpx Open full screen  NB: Walkhighlands is not responsible for the accuracy of gpx files in users posts

Had the same experience when we went to do the Inn Pin for the second time( first had been rained off). The guide, as an alternative took us up Sgurr na Banadich and I stood under what seemed like a power shower for lunch. Had to return one day when we said that we would join ANYONE to share the expenses at a day's notice.

Gutted aye, but there'll be another time. Aye I don't mind clag too much, when you book a guide in advance you get whatever the weather throws at you. But it would be nice to not get blown aff

Sgurr wrote:Had the same experience when we went to do the Inn Pin for the second time( first had been rained off). The guide, as an alternative took us up Sgurr na Banadich and I stood under what seemed like a power shower for lunch. Had to return one day when we said that we would join ANYONE to share the expenses at a day's notice.

That's not such a bad idea actually

If it doesn't work out this time anyway. Yeah Skye rain is pretty intense right

Third time lucky eh! And then you had a Hostel full of reprobates to celebrate with