Having seen Broad Cairn so close on our walk up Bachnagairn, I decided to tackle Broad Cairn and it's neighbour Cairn Bannoch from Glen Doll rather than the White Mounth Route. My initial route was just to head up Bachnagairn and over the two Munro's returning the same way, but Cairn Bannoch was so close to Jock's road...a little investigation and I found a few other reports heading over Fafernie linking Jock's Road with the White Mounth route. This was the route I decided to go for. So parked up at Glen Doll, we headed along Jock's Road. Moss was happy, she loves it up there so I don't think it bothered her that we were having yet another walk here. The route was becoming all-too familiar, out of the forest and up the glen to reach Davy's Bourach where we decided to have a proper look inside since we hadn't done so on previous visits. There wasn't much space, certainly not enough space to play with the stick Moss found! Though perhaps she was collecting firewood? We continued on. The ground was a bit wetter than last time, though not by much. However, there were a few more pools around for Moss to cool down in and get a drink. We could clearly see our two targets - Cairn Bannoch and Broad Cairn - for much of the walk and the shoulder of Fafernie where we planned to ascend to reach them. We could even see tiny people walking along the White Mounth route! Across here on Jock's Road though, there was just us. No sign of anyone we had this bit all to ourselves. Crossing Crow Cragies, I started looking for a way up Fafernie. From what I had read, the route seemed to be pathless, but at a fence post I saw a thin but perfectly clear trail that was heading the way we wanted to go, so we followed it. And that was when things got a bit mental, nothing to do with the walk, but there hares! Moss was walking just ahead of me and I saw two hares in the distance running away, so we stopped and I watched as they turned and came straight towards us! I put Moss in a down, she was fixated the hares were so close. No taking chances, it was lead on time for Moss! The odd one here and there, not a problem, but here there were so many hares it was driving her crazy, they were everywhere! Their scent must have been all over the place as well. It seemed to be almost like a game, wind up the dog as much as possible! 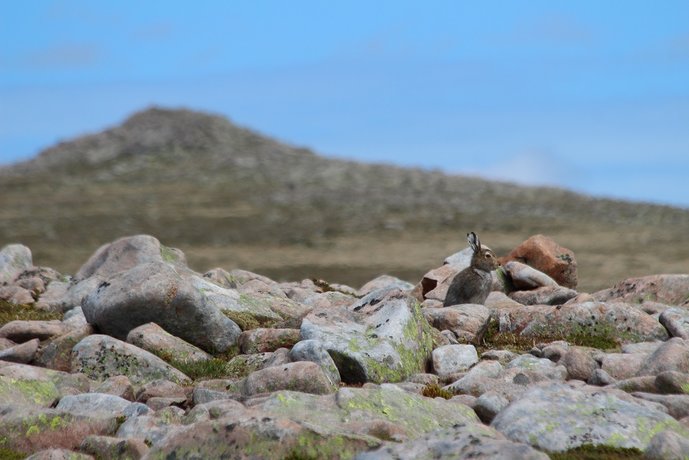 Race you to the top? 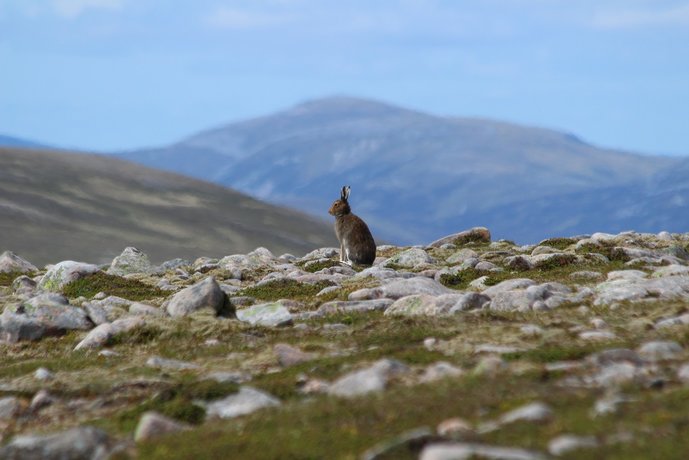 Oh, and we almost stood on a Golden Plover! Everywhere on the ascent seemed to be alive with hares or birds, I didn't know what to watch or where to look. It was amazing! Fortunately, we had joined a much clearer path so we avoided straying from it. The ascent to the summit of Fafernie was barely noticeable, maybe it's an easy climb or maybe it was because the wildlife was so distracting, either way the summit cairn seemed to appear very suddenly! There were fewer hares up on the summit, though I did spot a golden plover. Moss posed with the summit cairn, hares were soon forgotten thanks to a pool where she could get a drink which I think she needed after all the excitement. Water beats all! From here it was an easy walk along a clear path towards the first Munro of the day - Cairn Bannoch. Nothing as exciting as the ascent up to Fafernie, though I did spot a hare in the distance. It wasn't long before we were on the summit and for a change I decided to set the camera on timer for summit photos as there was a convenient rock right opposite. Climbing down, there was a clear track all the way to Broad Cairn and that too didn't take long to reach either. From the summit we had an amazing view down to Loch Muick, one of our favourite places. But no visiting there today, the views would have to do. Moss on the summit of Broad Cairn, Loch Muick in the background.

Moss' 21st Munro drawing her level with big sister Millie! Bittersweet moment, most of the Munro's are too much for Millie now but she did so much last year training Moss up to be the next Munro-dog. Moss is an amazing companion on the hills, staying close by and finding us paths and a lot of that is because of Millie. I'm sure when we are in a situation when we are bring another dog into the family, Moss will do the same for him/her.

We stopped for lunch here, though I always struggle to eat much so Moss ended up having half of my lunch as well as her own before we started the descent down the boulder field back onto the clear path which we followed to where it split, one way going towards Glen Muick and our route which led us down to the lovely, peaceful Bachnagairn. From here we followed the path alongside the river South Esk - the same river we live near much further downstream! Along the route we were treated to a couple of glimpses of a female merlin who flew very close to us but disappeared quickly! I thought I saw something last week flying close to the hillside, but too distant to say for sure but today there was no doubt! If only I'd had the other lens on my camera! May need to return in search of merlins! Now is that just an excuse to go back up here...??? Great shots of the hares and ptarmigan - but my favourite is of Moss with the broom.

dogplodder wrote:Great shots of the hares and ptarmigan - but my favourite is of Moss with the broom.

Moss does like her posing! It was funny, when I had the camera set on timer when she heard it clicking she looked straight at it!

Lovely report - and beautiful photos. This area is always a soft touch for me since it once was my 'local' - thanks for awakening the memories - love the photos of Moss