g14.gpx Open full screen  NB: Walkhighlands is not responsible for the accuracy of gpx files in users posts
My son, Chaz and me. Our instructor was Gary Hodgson of Tarmachan Mountaineering.

For our second day of winter skills Gary suggested we go a bit further afield, to Cruach Ardrain which was just a short way from our base in Killin and already on my ‘to do’ list. Our walk approached the mountain from the north; there is parking at the start of a forestry track next to the large electronic sign as you come into Crianlarich on the A85 from the east. The track gives good, fast going for about half of the walk-in distance and is the best way to negotiate the blanket forestry hereabouts. Just before a bridge over a stream, turn right, to the south, to ascend into Coire Ardrain. The going was a bit soggy but not too bad and now you get to see Cruach Ardrain set at the head of its horseshoe corrie. There is a high deer fence to get over and Gary told us that there’s only the one stile, it’s useful to get some local knowledge.

The thaw was continuing, the temperature was a ridiculous 12 degrees C when we set out from Killin at 9am so we had been getting a bit hot walking in our winter thermals! As we got closer we could see that there was still plenty of snow for us to play in. Over our beer the previous day I had asked Gary if today we could cover some more steep ground and if we could have a go at some basic rope work, Gary was happy to oblige! Gary’s route was to climb to the bealach between the Cruach and Stob Garbh, and climb Cruach’s east face. nearly there, our route to the summit was on the left

We walked up the easier snow slopes then stopped to get out crampons and axe. When we got to a decent slope angle we had a go at a rock belay; Gary and Chaz climbed up the slope and Gary showed Chaz how to set up the belay. Chaz then did a fine job of belaying my climb of about 50m. This was followed by another rock belay from Chaz on a steeper slope and this time I tested the belay for us both by purposely taking a slide to see what it was like! chaz and gary climbing to the first rock belay point chaz and me on the 1st belay chaz at the 2nd belay

I then climbed the slope with Gary and we set up a belay from a snow bucket backed up with a buried ice axe. I belayed Chaz with this and climbed up to follow with another snow bucket belay. This was so enjoyable, sitting in my seat looking over to Ben More and Stob Binnein whilst Chaz climbed up! having a nice seat on the slope

The final section to the summit was a bit dicey, steep and loose ground. Gary climbed to the top, set up a rock belay and brought Chaz up. Chaz then belayed me and we had a bit of a summit celebration. We had spent an amazing 3 hours on the snow, the time just flew by and was amongst the best time I’ve had in the mountains. We even had a touch of snow near the top to show it was actually still winter. over the lip to the summit 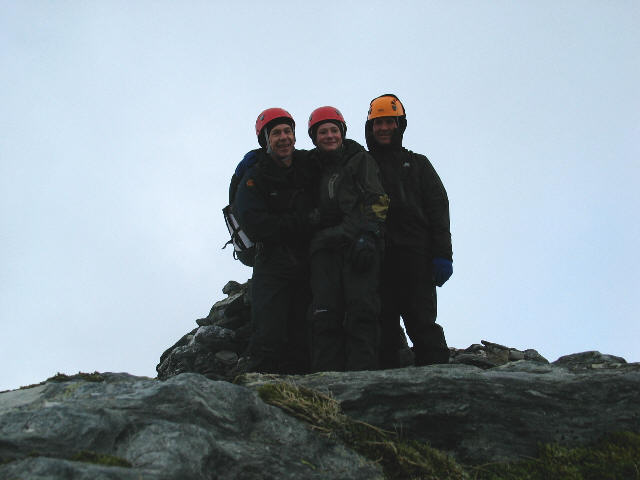 After a refuel we headed down the gentler slopes to the west for a while, then dropped down into the corrie where there was a small cornice for a last bit of fun. over the cornice back down to the corrie, nice end to the snow day

We followed our route in and made fast time back to the car, another long day though it being almost dark again. A pint was in order on the way back to base to celebrate another great day.

I was really pleased that we’d done our winter skills course and can highly recommend it. We learned a huge amount in a short space of time including, importantly, the level of our own capabilities and this led to an improvement in judgment and confidence amongst many other things. Thanks Gary! If you’re relatively new to winter walking or haven’t gone out in winter yet, go on a course, I’m sure you won’t regret it.

I've also found that it's not just the summit that's important to me, I don't just want the easiest route up - a bit of a challenge is also great. I'm really enjoying the winter and hope it hasn't finished yet!

Looks and sounds like you had a great time!

Well done, hopefully the skills you learnt will allow you both to enjoy the hills for a long time to come