Slioch by the Backdoor (NW Buttress)

Slioch by the Backdoor (NW Buttress)


Slioch is such a splendid mountain that having climbed it in the snow just a few weeks ago was no deterrent to us revisiting it on a very sunny day for a scramble on its Northwest Buttress / Ridge. We are not natural early risers but juices were flowing at the prospect of a walk and scramble on Slioch so we were both up by 5:30 am, and had reached the carpark at Incheril at 8:30. There were a few midges milling about so we didn't hang around. A quick hello to other walkers and we were on the path that leads to Loch Maree and Gleann Bianasdail.
It was already feeling warm and there was barely a cloud in the sky, (hmm things could get very hot Looking Across to Beinn Eighe

We took the path into Gleann Bianasdaill but after a short distance, at the slabs, we kept to the left following the path between Slioch and Loch Maree. The route was giving us a very different view of Slioch, steep grassy slopes, dotted with cragletts. It looked like an adventurous walker could make their way up in any number of places. The ground was very dry, but, despite this the wild flowers were coming into bloom, including a early purple orchid. My boots have started making a strange croaking sound so as we were walking along it sounded like we were being serenaded by a chorus of frogs

.
About 1.5km along the path we came the across the ruins of an abandoned settlement, in a meadow, at the base of a waterfall, A remote and peaceful spot to stop for a break and contemplate bygone days and possible history of the ruins. The Meadow and Ruins

After our break the real work began, as we made our way uphill over the rough ground between two streams, weaving about as the terrain dictated and making use of faint paths that periodically appeared. We were aiming for the watershed at the base of the Northwest Buttress, which we could see in the distant. Northwest Ridge and Buttress Starting from the watershed. Spectacular North West side of Slioch

In contrast to the dry ground lower down, the streams here were running well and the ground was damp, there was even a newt sunbathing on the path. Newt wondering where all the frogs he could hear had come from.

. We are creatures better adapted to a colder climate and usually retreat to our igloo when heatwaves hit the Highlands.

12:45 and we had finally reached the base of Buttress, where we almost collapsed in a soggy heap,

. An excellent spot to admire the views and restore our stamina with an extended lunch break. Views from base of the buttress According to the guidebook (Highland Scrambles North SMC) You can start this scramble as grade 3 up the right had side of the buttress or as a grade 2 up a gully in the middle. We were planning on the 3 option, perferring an open route, but also to keep in practice with our rope work for some other routes we have planned. I know many Walkhighlands scramblers would tackle a grade 3 without a rope but our bottle doesn't extend that far

.
We were geared up and ready to go but on closer examination the start looked more VDiff climbing than scrambling, and the guidebook said traverse in from the right. Not wanting to untie from the rope we took in some coils and did a short rope shuffle past a steep slippery to gully to a steep heathery slope/terrace and started moving up this. I find short roping far more terrifying than soloing on this type of terrain, as you are constantly off balance, you don't have full use of both hands and where grabbing heather may stop a slip for one person it would not hold two. The mouse in my back pocket was squeaking and I am sure I could hear Jeremy Jetboil whimpering in Dick's rucksack. The heathery slope/terrace from above

On this occasion the short roping paid off as were able to place some gear to protect our traverse back onto the buttress and move together in safer manner. Back on the rock the easy climbing to the top of the buttress was good fun. The top of the buttress was linked to a broad ridge by a grassy walkway. A steep dusty path led up to a series of blocky towers at which point we completely lost track of the route description

, but the direction was obvious as weaved way our way up the pinnacles. A mixture of steep walking and blocky scrambling and the setting was spectacular. 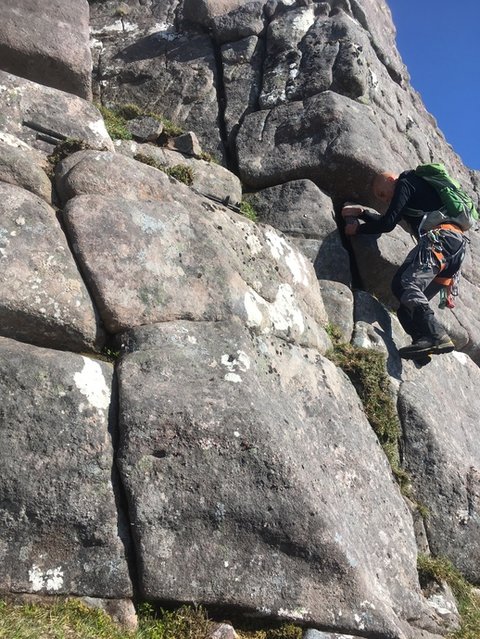 As we approached to top of the final tower there was a path leading down to the left and we convinced ourselves that this was the way to go. Our only excuse for bypassing the most exciting part of the ridge by diverting onto a dusty exposed path is that we are easily led astray and it was very hot The bit we missed.

.
The path led us back round to a narrow section linking the pinnacles with Slioch summit and a finger of rock pointed the way. The only way is up.

18:10 and on the summit of Slioch hot, tired and dehydrated. It was a great route

but why did we have to muff the final section 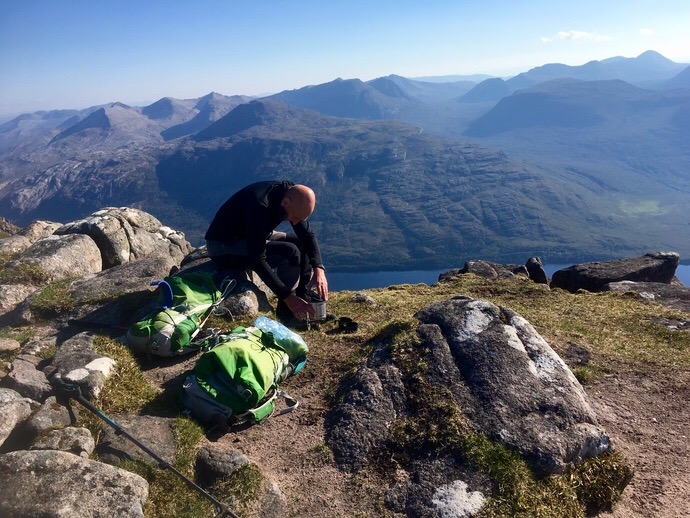 From the summit we could see some people at the trig point, the first people we had seen since leaving the carpark.
On the map it looked like you could take a direct descent line from Slioch summit to Coire na Leaghaich alongside a stream. We decided to try it. 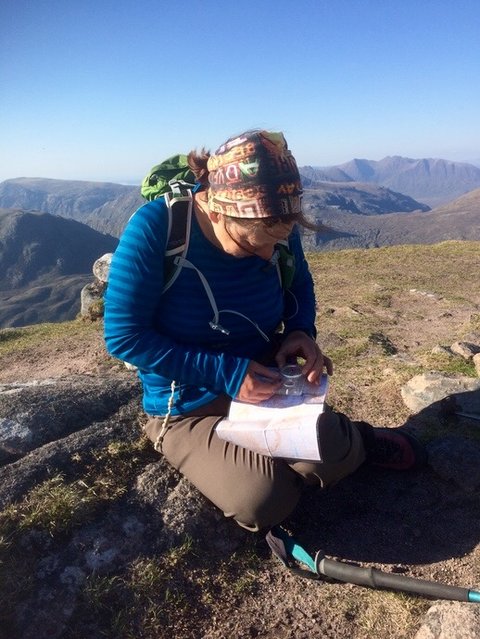 Taking a compass bearing to the start of the descent.

The stream ran down the Coire wall in a gully which looked as though it may be very steep, but the ground to the sides of gully was no steeper than the standard ascent/descent routes, there was even a path most of the way. Still feeling dehydrated we stopped by the stream for another brew and to top up our water. It was lucky this stream was running well because after this there was nothing but muddy trickles until we had nearly reached the shores of Loch Maree.
Still feeling the effects of the earlier heat it all turned into a very slow descent with multiple stops. The sandstone cliffs were glowing red in sunset. The Cliffs in the sunset

And it was 23:30 hr before we needed our head torches. Switching on the headtorch

My apologies to anyone camping in the carpark as we staggered back to the car at midnight. We did try to be quiet but we're feeling a little clumsy and the midges were hungry.

Looks good - not sure if this is the ridge I was looking down to from the summit last year. If it is, then it's a little more committing than I thought it would be! Great report though

malky_c wrote:Looks good - not sure if this is the ridge I was looking down to from the summit last year. If it is, then it's a little more committing than I thought it would be! Great report though

Thank you Malky. It was a nice way up to the summit and I found most of the scrambling quite straight forward and I admit I am not the bravest of souls, but going down it may be a different story. The scrambling guide said there was a grade two gully as an alternative start to the bit we did on the rope but I can"t say what this was like.

Looks amazing. I think there was a Dooterbang report on the same a year or two ago.
I wonder how this would compare to Curved Ridge and Sgurr nan Gillean pinnacle ridge, those being my sort of limit when I was able to do this sort of thing; not that I'll be going anywhere near it, just wondering if my former self might have managed.

litljortindan wrote:Looks amazing. I think there was a Dooterbang report on the same a year or two ago.
I wonder how this would compare to Curved Ridge and Sgurr nan Gillean pinnacle ridge, those being my sort of limit when I was able to do this sort of thing; not that I'll be going anywhere near it, just wondering if my former self might have managed.

It was a splendid approach to Slioch and the walk in was worthwhile in its own right.
After the horrible heather which was more unstable than technical the climbing wasn't that difficult. The buttress we did on the rope was probably comparable to the harder sections on Curved Ridge although more consistently exposed. After that it was steep walking and easy scrambling,

What an excellent way up a stunning mountain. Long old day though!

I would really recommend this Route for anyone who likes a scramble, It was a long day, we are definately the stamina rather than the speed brigade