Cairngorm Fry-Up ..... and a Useful Lesson in Algebra!

Cairngorm Fry-Up ..... and a Useful Lesson in Algebra!


Time for wee Jimbo and Big Jesper, to get some real Cairngorm hills under their belts, though to be fair, we both have had a wee nibble around the edges. The good forecast gradually became more good and even gooder (sic), but little did we know, just how gooder it would be

Usual early start, with bikes already on board, as we made for the Linn of Dee. Car park already buzzing with a bus load getting on their marks, for a similar jaunt to ourselves. Poor Jasper was near in tears as the parking meter swallowed his £2 without so much as a 'thank you.' Jimmy quickly scribbled a 'get out of jail free' note, if the legal authorities should come a'checking

Bikes unloaded, we soon got underway, sticking east, to the road alongside the river Dee, for a few hundred yards. Once Big Jasper gets up a head of steam, it is hard to stop him, so it took a fair amount of roaring, to catch his attention, where the forest road has to be taken to the left. After retracing his route from near Braemar, he soon caught up with cool Jim, who was idling up the gradual gradient and before long, the pair passed the massed walking group, possibly deafened by their puffing and panting, hence needing a gentle 'get ooot the way' as we passed by

It crossed our minds on the way up Glen Lui to Derry Lodge, there were a few more downhills, than expected, but wasn't soon till we were propping bikes against the shed and getting set to tackle the path up the east side of Glen Derry. Quite a few folk on the move, including lots of youngsters, even at this relatively early part of the day. A few folk also taking their bike, higher up the path. Wasn't too long till we came to small cairn marking departure point, NE towards Beinn Bhreac. There is a semblance of path here and there and also boggy there and here

Soon emerged from trees onto open hill and felt first effects of the sun, as we sweated over a few rises, onto the summit plateau. A short diversion to the right and we were at the eastern cairn, of Beinn Bhreac, in about 2hrs from having left the car. Felt good being able to see some of the other Cairngorm hills and good views all round. Had a quick chat and photo by a couple of Manchester chaps, whom we would see plenty along the way. To the north we could see our next target, Beinn a'Chaorainn, several kilometres across the Moine Bhealaidh. Wasn't exactly a thrilling trek across this large expanse, though I did spot a wee lizard, who prefered not to pose for photo's. We gradually caught up with the English chaps and kept them company across some of the bog hopping, though we were fortunate the ground wasn't too boggy just now. There's the odd signs of path, but very little. Easy enough on a day like this, but another of these places, you wouldn't want to get lost on, in bad vis. Looking by the two English fella's, to Coire Etchachan and Ben Macdui.

Panorama summit cairn, Beinn A'Chaorainn and many others. As described on WH's, we made for the stony southeastern slopes, which soon get quite stony, as we made the tougher than expected push for the large summit cairn of Beinn a'Chaorainn, at 1083m. Much better views now of other hills and corries, such as Macdui, the granite tors of Beinn Mheadhoin, the Hutchison memorial Hut and Coire Etchachan. Time for some grub and much needed fluids, as we were dripping in sweat by this stage, having taken about an hour, in the traverse between to two summits. From our viewpoint, we pondered our way onto Beinn Mheadhoin? The English pair, cannae mind names, seemed to be of a mind to approach via Loch Etchachan, whereas we had in mind, to ascend the eastern side of Stob Coire Etchachan, from a wee kidney shaped lochan (puddle 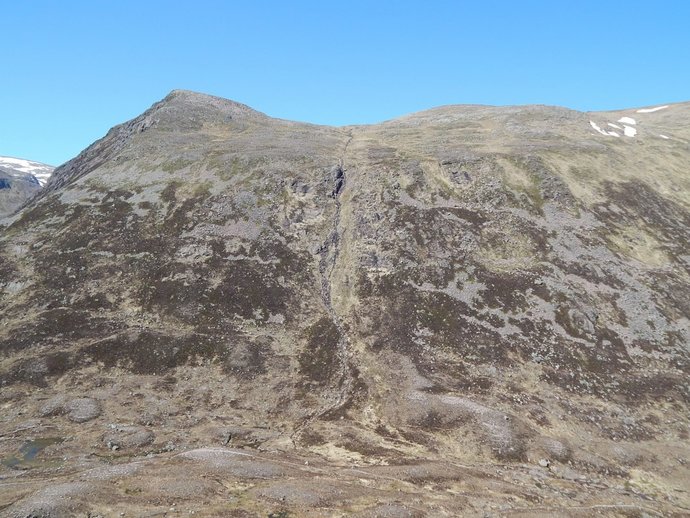 Stob Coire Etchachan. Our route of ascent up left of gully, to Beinn Mheadhoin. It looked rather steep to my legs, by now starting to say to me "I'm getting a wee bit tired!" I was also getting tired of taking off my boots and unloading debris of stones, heather and grass from within. Shorts and no gaiters, not great idea here

Anyway, we decided to head down into the Lairig an Laoigh and take it from there. Yep, it still looked as steep, but it would be a bit of a wander round the other way and who knows, might be as steep heading up from Loch Etchachan? Decision made - go for it! Was quite a slog at first. Awkward boulders, heather and steep. Just keep grinding on. Whether the English boys had change of heart, I don't know, but we spotted them well below, following our rough path. Beinn Mheadhoin. Jaf, already on top, wondering where I'd got to?

Gradually things began to level off, but even then, there is still a fair haul in distance and height to make it onto the plateau of the Barns. By this time Big Jesper had left me well behind, as he pushed ahead, keen to get home before darkness set in

In the distance, I could see him chat with someone, then disappear round the back of the summit tor, before popping out on top. I enjoyed the now flatter terrain as I slowly trudged around and up to join him. Would we have been quicker, easier going round the 'longer' way? Who knows, but we both savoured the views from our fine vantage point, as the walking group we had passed at the start, now emerged. crawling like ants towards our nest "Where have you been?" We were about five and a quarter hours to this point. We had seen where a fellow WH'r had done same route in 7.4 hours, but now we were well behind that schedule with Derry Cairngorm still awaiting. I had been a bit unwell a few days beforehand, but I didn't think I was slowing us down to that extent

Perhaps it was the relentless heat and dry wind, which was gradually wearing me out. That sounds like a good excuse After posing for a few (umpteen) summit shots and the views of Macdui, etc, we made off along the Barns, when an unusual occurrence happened. Well, it's actually not that unusual for us, but the fact Big Jasper left his walking pole behind and not me, is! Oh how I chuckled

Unfortunately, didn't take Jaf long to retrace half mile and he soon had me on the march again, this time following the 'usual' descent route, SW down to the beauty of Loch Etchachan. By now I had run out of water and should have topped up here, but there were other folk around and I expected another stream higher up, so didn't bother. Mistake Looking down on Ben Avon, over to Cairn Gorm. Yours truly, looking to Loch Etchachan and Macdui The bouldery, Barns of Beinn Mheadhoin. Someone heads back for their walking pole!

We took the path round the western shoulder of Creagan a' Choire Etchachan, but seemed to miss the signpost (joke!) for Derry Cairngorm, although were quickly onto that and soon back on track. Time for another offload of boot debris, by now added to my list of excuse's for a breather

The sight of the climb up Derry Cairngorm, didn't look too daunting, but don't be fooled. I was fooled

Just as I thought I would crest the summit and see Big Jesper sitting waiting for me, another ridge of boulders would appear, with him marching on towards it. Damn! Eventually and I mean, eventually ages later, I caught up at the summit cairn, 1155m. Over to Lochan Uaine. Cairn Toul, Stob Coire an t-Saighdeir, behind. Myself, just about still standing :) Odd angle looking back up Glen Derry. Beinn Bhreac far right, Beinn A'Chaorainn and Beinn Mheadhoin either side of the Lairig an Laoigh. Looking down on Derry Lodge ... with much relief!

That was a tough four summits. Just over the 7 hrs, but it wasn't to be a quick descent from here

It's a long, long way down and not without it's odd airy, hairy moment, as we traversed round the daredevil side of Carn Crom. Take care! Distinctly got my pulse beating like wee lamb! Enjoyed some nice views back up Glen Derry and down to the Lodge, but by now feet were fair nipping, legs tired and heart weary, as I finally collapsed in a heap, back at the bicycles

I fair enjoyed my top-up from the burn and slowly slung my leg over the saddle, onto the pedals and back down the glen. Yes, the general trend is downhill, but those uphills, now seemed twice as steep, as when coming downhill on the way up, if you know what I mean

Anyway, eventually made it back to the car, in 9.1 hrs, well exhausted. Might have been about two hours less had i not emptied boots about 10 times, but then again, I would have died from exhaustion. definitely one of my toughest days on the hills, although Big Jesper was still fresh as a daisy Having looked at WH route's later, I learned a useful algebraic lesson i.e.,

RTC wrote:That's a lot of ground to cover in just over 9 hours, Jim.

Think you can impress me with your algebra? - Not until you can solve equations in Japanese.

Hi Russell, thanks. Hard going for my wee legs, but very enjoyable

I was never much good at equations and as for Japanese, sayanora!

Hope you're still getting out plenty. Was through in your parts just week ago with a slight mountaineering connection, at party in Devonvale Hall, then abseil from the Forth Rail Bridge the next day

That was a long walk on a warm day - especially to my mind who did each of these hills on separate days!

A tough sounding day but great views along the way and well described.

dogplodder wrote:That was a long walk on a warm day - especially to my mind who did each of these hills on separate days!

Thanks Dogplodder - dog who plods, is wise dog!

"Abseiling from the Forth Rail Bridge! Very impressed!" - Was a bit scary, but after one signs up for these charity thingy's, it is very hard to back out, Russell.

Cheers. Tough when you've wee legs, unfit and trying to keep up with a mountain goat

Another great day jimmy. Tough but tougher to come.