I just love the Scottish weather

. Now, I know this isn't the usual sentiment you hear expressed, but our generally dreich and unpredictable climate does have a few definite advantages. One of these is that surprisingly enjoyable thing that I suspect must have happened to most regular Walkhighlanders, where you have to completely change your walking plans at the last moment because of a crap forecast in the area where you'd originally planned to go, and end up climbing hills that hadn't even been on your radar

.
Tom and myself had identified Saturday 27th May some time ago as a mutually convenient date for another choirboys' outing to bag a Munro or two, and Plan A had been for something around Fort William: maybe those two eastern Mamores that we both still had to do; maybe even Ben Nevis via the CMD arete if the weather was looking good enough

... In the event, however, the forecast was for the wall-to-wall sunshine of Friday 26th May (when we were both slaving away at the NHS coalface

) to break down into thunderstorms and torrential rain along the West Coast by Saturday lunchtime. We quickly decided that the Fort William area wasn't looking too grand for walking, and changed our plans for a Cairngorms outing instead. The problem with that was that Tom has done most of the Cairngorms Munros; but he hadn't done Ben Macdui or Derry Cairngorm yet, so we went for those two via the Linn of Dee approach.

our_route.gpx Open full screen  NB: Walkhighlands is not responsible for the accuracy of gpx files in users posts
It would have been a very long day if walking in all the way from Linn of Dee as a day-trip from Glasgow, however, so Tom kindly agreed to bring a couple of bikes along: he had recently acquired a new mountain bike and his old one was still in very reasonable nick as a spare, which was handy for me as my old bike would have needed some work to get it roadworthy. Being the generous chap he is, he even let me have the new red shiny bike, and took the old one himself

.
We got off to a good early start from Glasgow, and when we arrived at the Linn of Dee car park, the sun was shining and the birdies were singing. This is really the first Long Cycle In that I've done for hillwalking purposes, and I was a bit worried how I'd manage on a bike with a backpack and all, but in the event it proved to be a treat: far better than plodding the long kilometres up the Landrover track! In what seemed like no time, we were up at Derry Lodge, a boarded-up former hunting lodge that now belongs to the National Trust for Scotland. We left the bikes behind a handy big wooden shed, and set off over the bridge across the Derry Burn to take the continuing rougher track along the north side of the Luibeg Burn. Perhaps because of the crap forecast further west, the Cairngorms were very busy this morning, and we spied at least three other parties ahead of us. We were hoping, however, that at least some of them would be heading for Carn a' Mhaim, which shares the same approach. It was an easy and scenic walk westwards to Luibeg Crossing, where the path for Carn a' Mhaim crosses the Luibeg Burn to head up the SE ridge. We had decided, however, that attempting the round of three Munros was probably a bit too ambitious, particularly if the weather might turn later in the afternoon, so we ducked out on Carn a'Mhaim (Tom has already done it anyway) and headed up northwards on a fainter path on the east side of the Luibeg burn, to take the direct line up Ben Macdui's south ridge which is known as Sron Riach.
Some lovely old Caledonian pinewood on the walk to Luibeg Crossing: Luibeg Crossing itself, with the ongoing path up Carn a' Mhaim (which we didn't take): ...And the first sighting of Sron Riach, with Ben Macdui's summit environs looking dauntingly far away up there! Thankfully it wasn't quite as relentless an ascent as it initially appeared, and the increasingly impressive scenery helped to keep our minds off the physical effort. Firstly, there was a great view of Carn a' Mhaim's northern arete which connects it with Macdui: the eastern slopes of the arete were looking impressively steep and craggy from this angle. Next up, Cairn Toul came into view behind the northern end of the arete: Nearly up the nose of Sron Riach by now, and Tom was forging ahead merrily. I think it would be fair to say that I made somewhat heavier weather of it, but I got there eventually. With the Carn a' Mhaim arete finally out of the way, there was a grandstand view now out west across the Lairig Ghru to Cairn Toul: 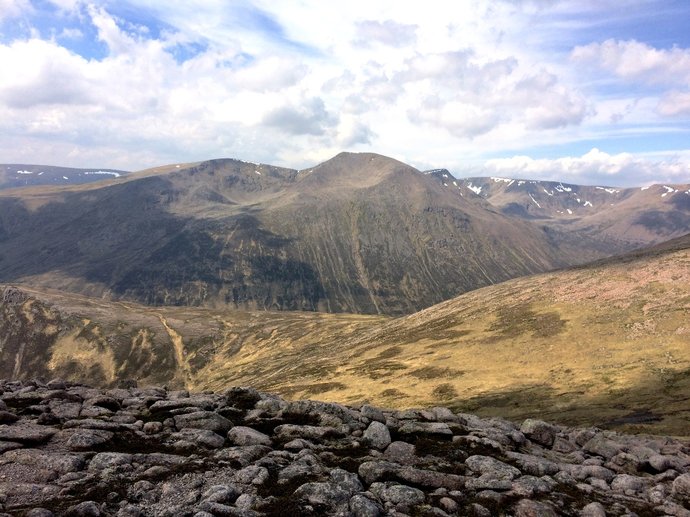 A bit higher up, and the impressive cliffs of Coire Sputan Dearg came into view, with Macdui's relatively flat summit environs somewhere up there to the left: The final ascent to Macdui's summit plateau was a bit steeper and pathless. I found it rather hard work, but there was at least a fantastic view back SW now to the Devil's Point for distraction: Tom was well ahead of me by now, as I puffed and panted up the last wee bit of ascent to the summit plateau, keeping a close eye out for the yeti-like spectre of the Grey Man, who is said to haunt this hill

!
Tom at the summit with a grand view of (from left to right) Cairn Toul, Sgor an Lochain Uaine and Braeriach behind him: Me at Macdui summit, still getting my breath back but delighted to have made it! We had another Munro to climb, though, so we grabbed a quick lunch then set off again eastwards. The direct route to Derry Cairngorm is blocked by Coire Sputan Dearg's very substantial crags, so it is necessary to head east for a fair distance before eventually cutting down right (southwards) across the western flanks of the Munro Top called Creagan a' Choire Etchachan to reach Derry Cairngorm's north ridge. Thankfully there was a good path for most of the way, and on the whole it proved to be a straightforward and very scenic high-level saunter.
A lovely view of Beinn Mheadhoin looking like a spiny-backed dragon from this angle, with its numerous summit tors that are known as 'the Barns of Beinn Mheadhoin': Another view west across the Lairig Ghru, to Cairn Toul, Sgor an Lochain Uaine (I flat refuse to call it 'The Angel's Peak'!) and Braeriach all lined up around An Garbh Choire with its colossal cliffs: Tom on the way down towards Loch Etchachan, the UK's highest substantial body of water no less, with the impressive Coire Sputan Dearg crags to the right and the Barns of Beinn Mheadhoin in the distance: Big kids that we are, neither of us could resist striking a pose at the edge of the crags: Before long, we found ourselves on the western flanks of Creagan a' Choire Etchachan, where we cut across southwards on a short pathless section, to soon find another path heading up Derry Cairngorm's bouldery north ridge. The path disappeared amidst boulderfield about two-thirds of the way up, but it didn't take us too long to boulder-hop our way up to Derry Cairngorm's twin summit cairns. We weren't sure which was highest, so we made sure to visit both!
The inevitable summit photo-shoot ensued: ...And a grand view back to Ben Macdui with Lochan Uaine and Coire Sputan Dearg, this time mercifully unenhanced by members of the Bearsden Choir bass section 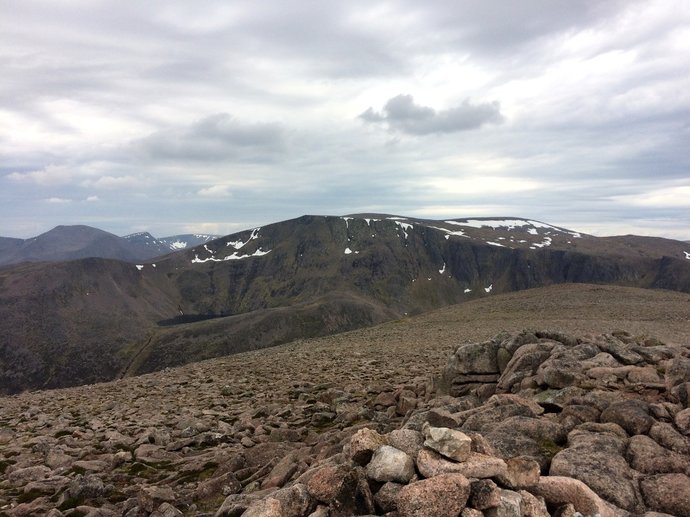 Derry Cairngorm is basically a huge heap of red boulders (heaven knows how it got its name, which comes from the Gaelic 'Doire Carn Gorm' or 'BLUE Hill of the Woods', when it is so conspicuously RED

), and there was an even MORE entertaining boulderfield on descent down its southern flanks than there had been on the ascent up the north ridge. We made rather slow work of this, but eventually we found an improving path heading southeast to skirt round the east side of the minor top of Carn Crom to head back down to Derry Lodge. There was one very short scrambly section at a 'Bad Step' on the traverse around Carn Crom, but thankfully that didn't detain us long and we eventually found ourselves back at Derry Lodge. It was a real relief to get back on the bikes, with the track back to the car park being mostly downhill this time!
I'm not really sure exactly how long it took us: however, I reckon the 7-hour time I've put is about right for the round from Derry Lodge, not including the cycle there and back from Linn of Dee. A really great day's walking, this route, and all the better for having been selected at relatively short notice

Looks like you skipped the poor weather (which didn't turn out to be that bad in the end - I was on Lochnagar at the time). You may well have been two of the many folk I passed on my walk out from Derry Lodge on Saturday morning (sometime between 8 and 9). You're not wrong - it was pretty busy!