Route description: Sgurr Dearg and the In Pinn


Well, it's a pinnacle, and it's inevitable you have to go up it if you want to complete the Munros, or you just want to do the best scrambles in Scotland and/or UK (delete according to political preference). We'd had our Skye trip booked since the previous August, with Paddy McGuire our guide. The first two days had been spent in rain and clag completing the southern three Cuillin Munros and the pair from An Dorus. Both of those were full on days for an old chap like me, somewhat at the back of the queue when it came to dishing out the svelteness and the long legs.
The Wednesday however, dawned dry, but grey initially, and according to Paddy the Pin was on. We left the Memorial hut in Glen Brittle and were marched briskly up the western nose of Sgurr Dearg, the hill to which the Inn Pin adheres.
"We" were myself, borderhugh, my eldest son Alex and Dave Reay, a non-WH'er, but on about 270 Munros.
Preparing to leave the hut: 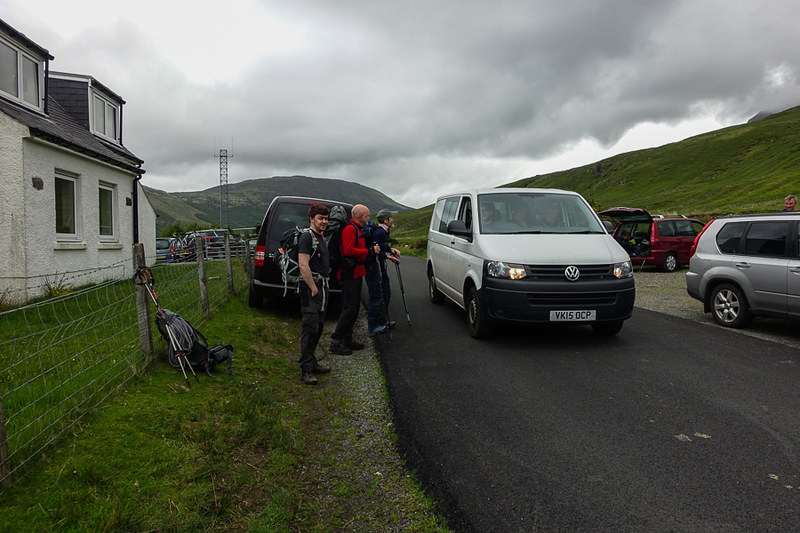 Straight up the western nose of Sgurr Dearg: 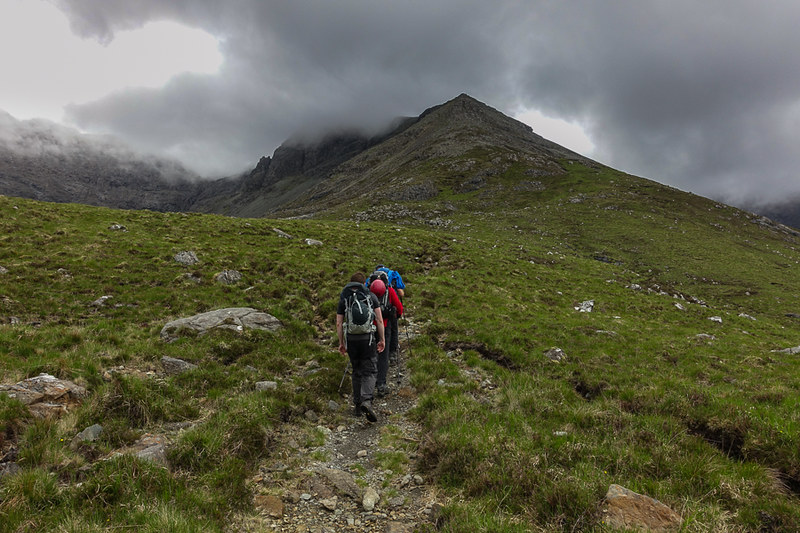 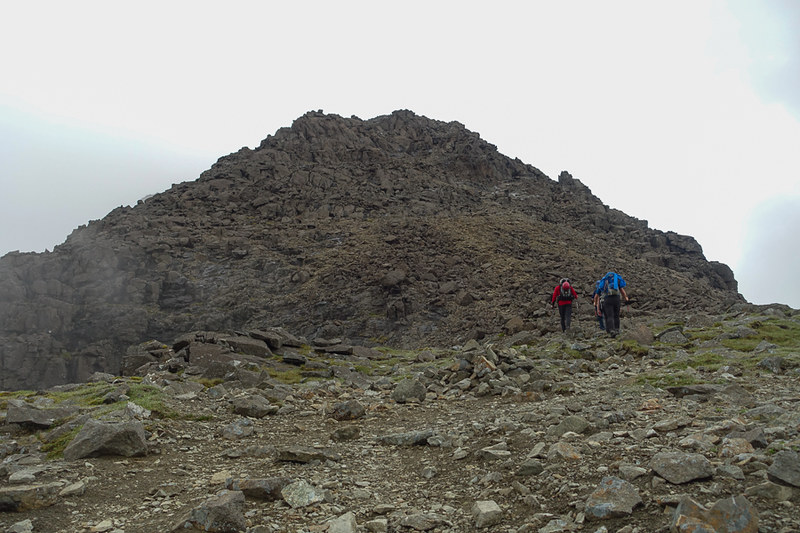 Looking back down to Glen Brittle: 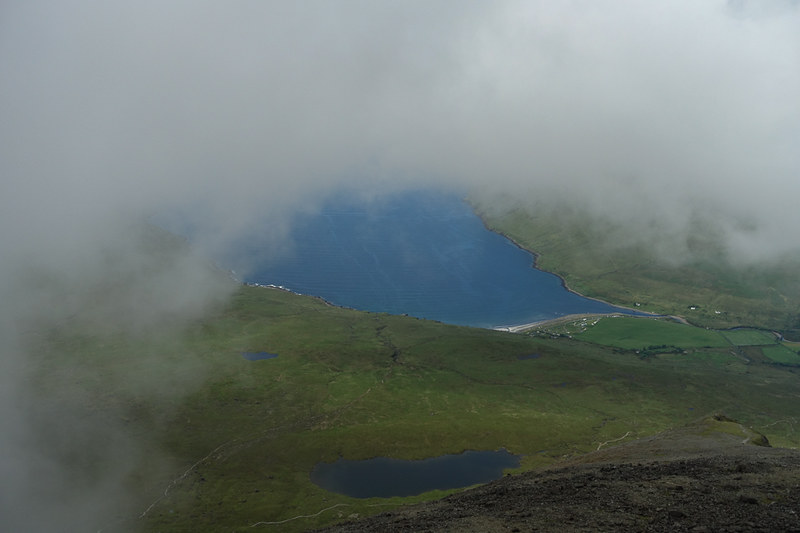 Soon it was time to don helmets and harnesses, just in case there was an early opportunity to nip ahead of the queues ... 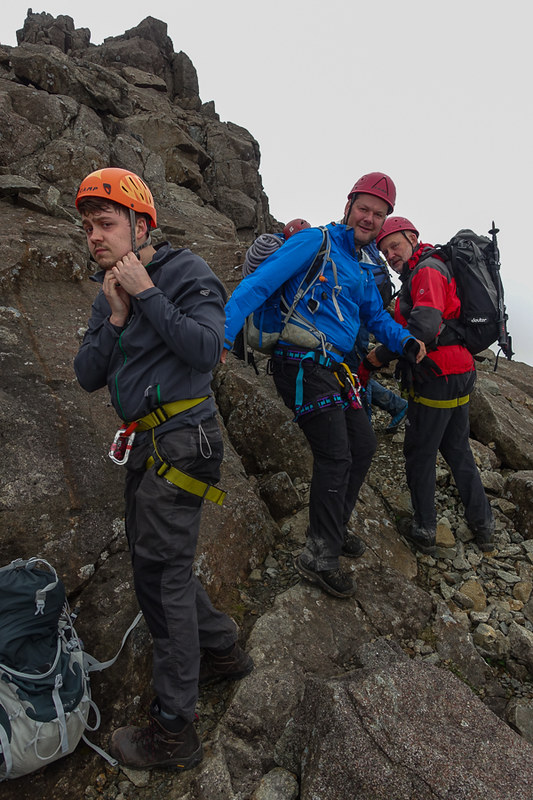 After some scrambly traversing along the summit ridge of Sgurr Dearg the first view of the Inn Pin loomed out of the cloud: 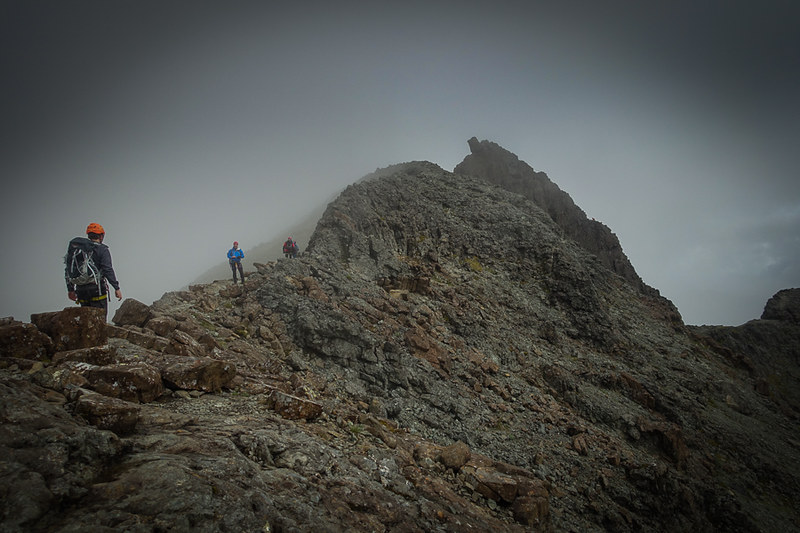 We got to the ridge above the Pin two hours after leaving the road, a fairly rapid ascent by my standards, but well worth it as there was only one group waiting to go up the Pin. Paddy had us down at the base pronto and busied himself with ropes and gadgetry whilst we watched the previous group ascend. 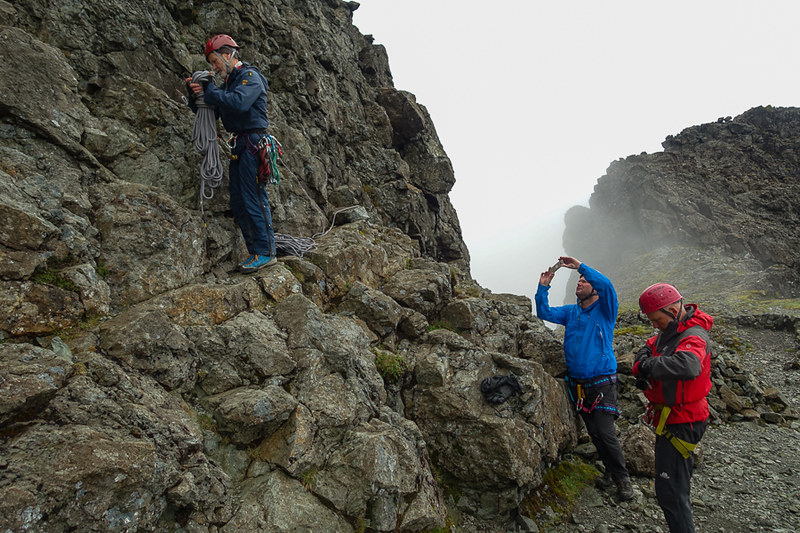 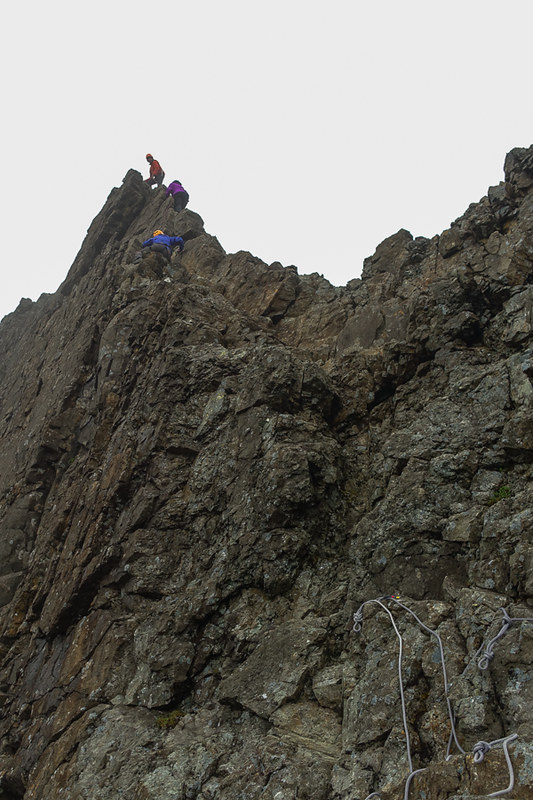 Soon enough it was our turn. Paddy had us go up in two pairs, on one rope per pair; quite how he worked it out was baffling to me but it did the trick. The climb is graded as a moderate rock climb and seemed a straightforward steepish scramble. Just before the first belay there was a tricky lump to haul oneself up, the holds were polished and a little unclear, but it's amazing what you can stand a mountain boot on and still get purchase. We rested at a small ledge at the first belay, Paddy doing what he does best: 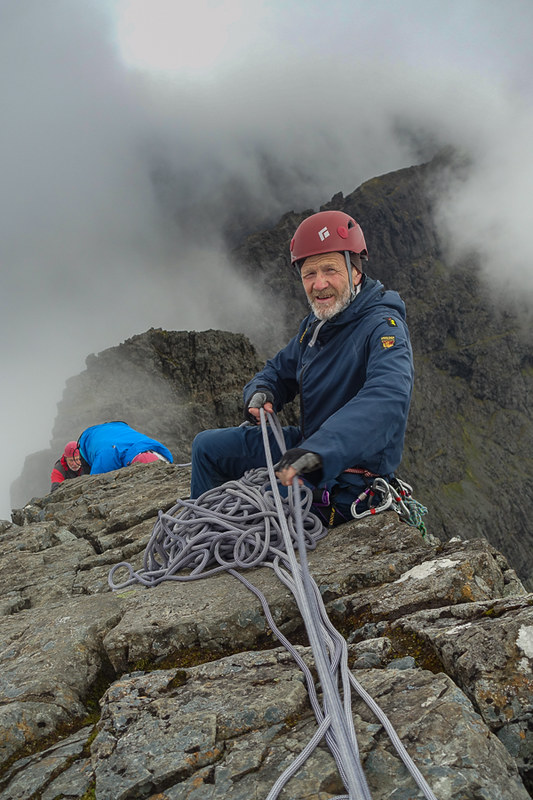 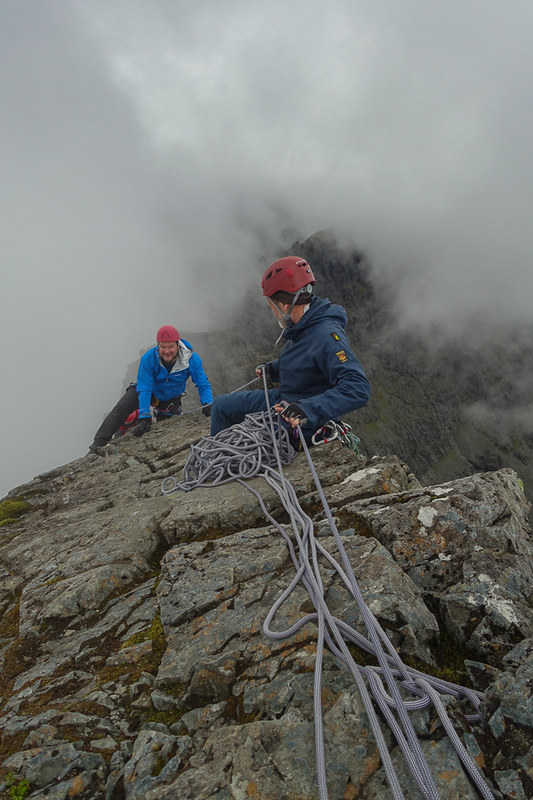 The second pitch was a gentler angle, but quite narrow as I remember. And that's the thing, the whole scramble went by so fast and we were concentrating so hard that it's hard to remember much detail about the climb. I wasn't really aware of the drop to the right - a thousand feet apparently - again, mainly due to concentrating on the climb. All in all, not as bad as I thought it might have been, and perversely enjoyable in parts.
Happy Inn Pin summiteers: 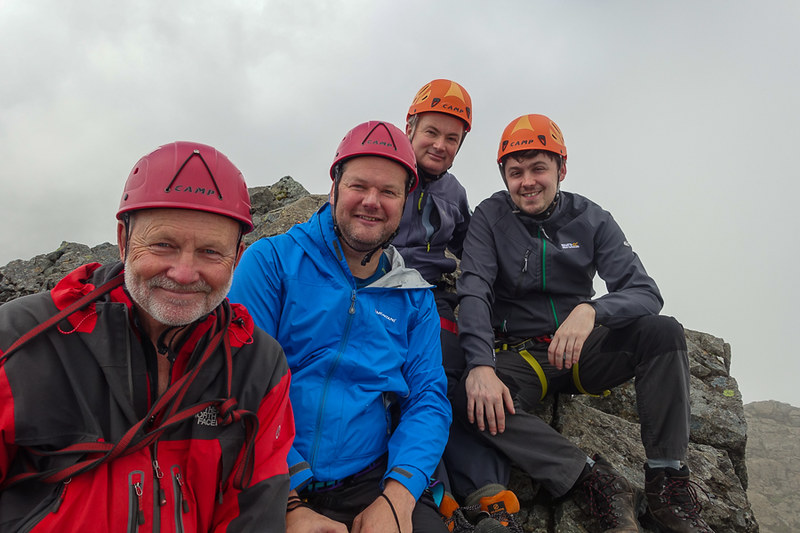 Paddy lowered us off the steep face, which I found great fun. Alex going first: 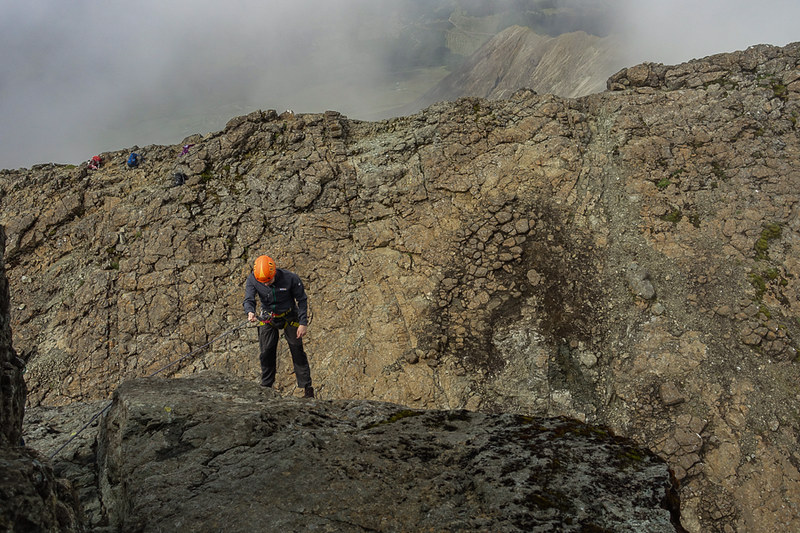 Climbers on the ridge of Sgurr Dearg, getting ready for their turn: 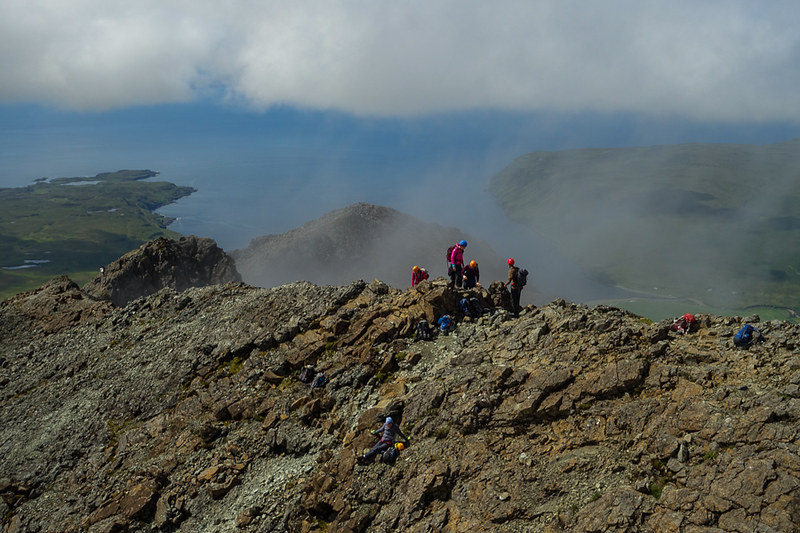 borderhugh being lowered, Sgurr Alasdair getting in on the act finally: 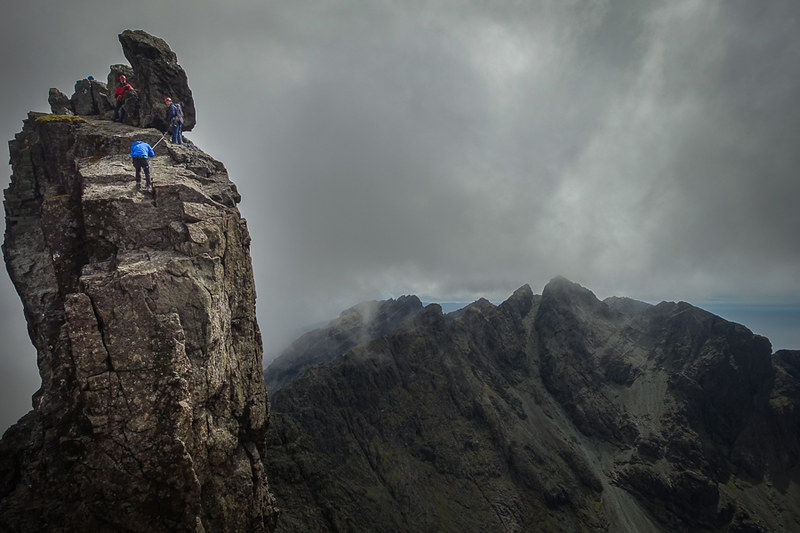 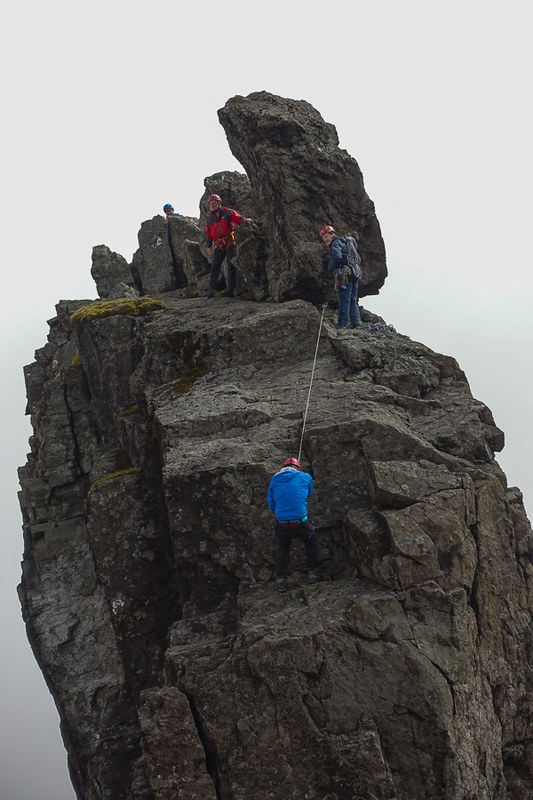 I forgot to mention, the RAF managed a fly past as we did the second pitch (nice touch, thanks lads), and the day just kept getting better and better. Lunch was taken on the ridge, watching others ascend and descend the Pin: 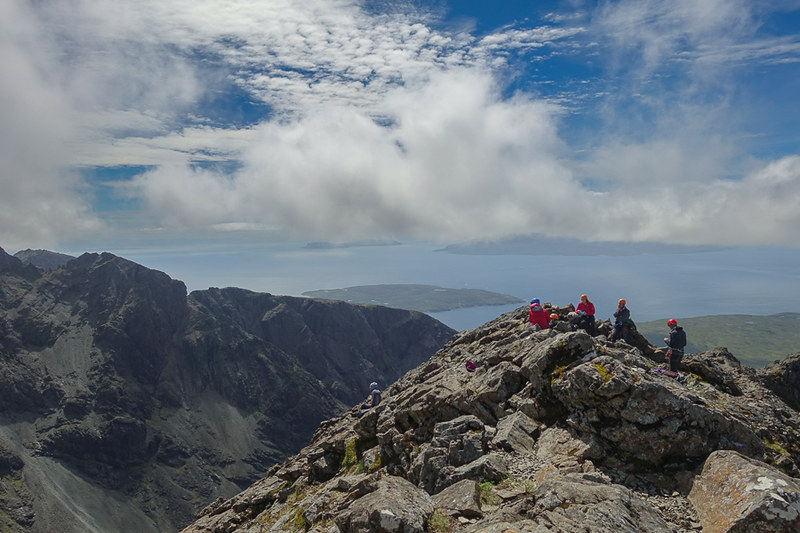 And soon time for the group posing with their quarry: 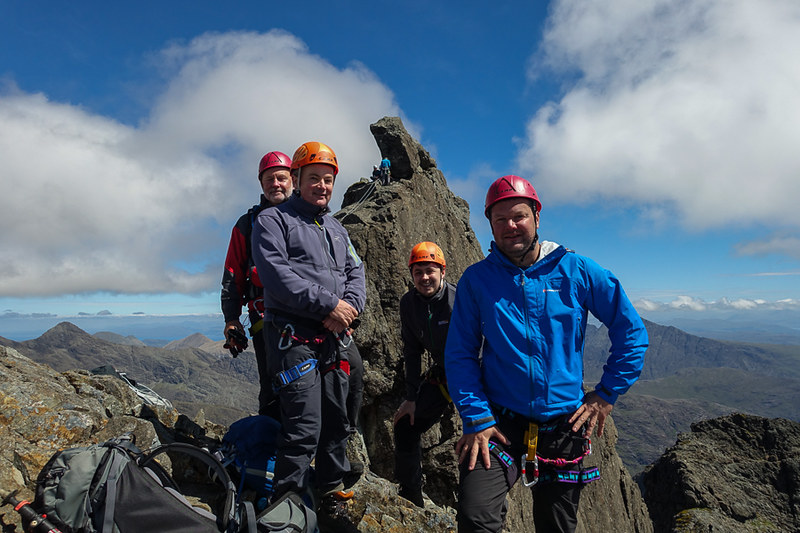 The weather was well on our side now, and with such views all around it was hard to leave the nest-perfect lunch spot, Rhum out to sea: 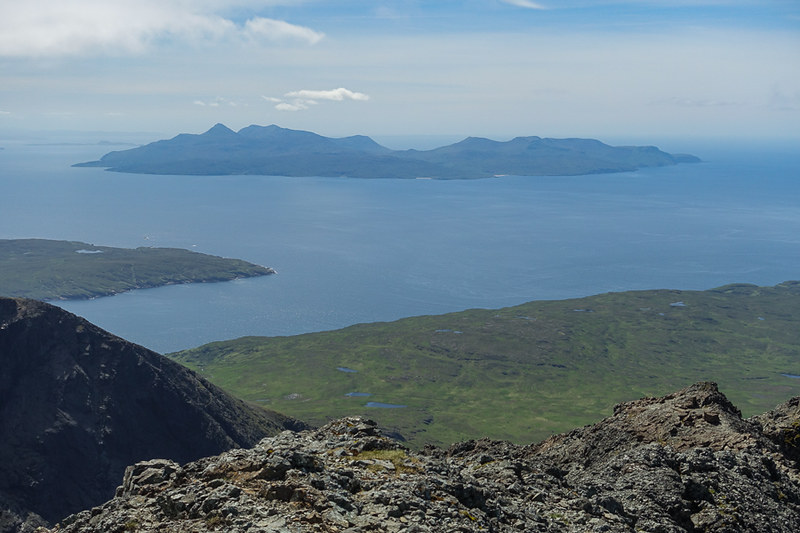 The ridge to the north, Sgurr na Banachdaich and Sgurr a'Greadhaidh, both traditionally clag-bound in my experience:

And to the south, Sgurr MhicChoinnich, Sgurr Dubh Mor and Sgurr Alasdair:

And so it was on to Sgurr MhicChoinnich for the second Munro of the day. First of all though we had to descend over the steep slabs below the Pin, probably more hazardous than climbing the Pin itself. Great care was needed, but soon enough the bealach was reached, and there was a pleasant flat area to relax on and take photos before the second scramble of the day. Sgurr MhicChoinnich ahead: 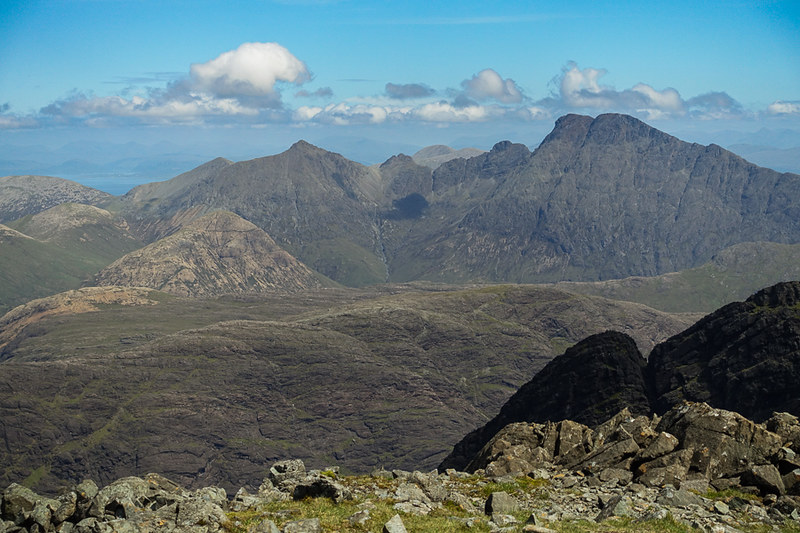 At the start of the scramble up Sgurr MhicChoinnich, the Pin seeming quite small and insignificant above An Stac:

The ascent was fairly straightforward given the dry rock. It's quite a sustained ascent, eventually leading to a small summit with half a memorial plaque. Paddy on summit:

Looking back to Inn Pin on the descent:

Last team photo before the descent: 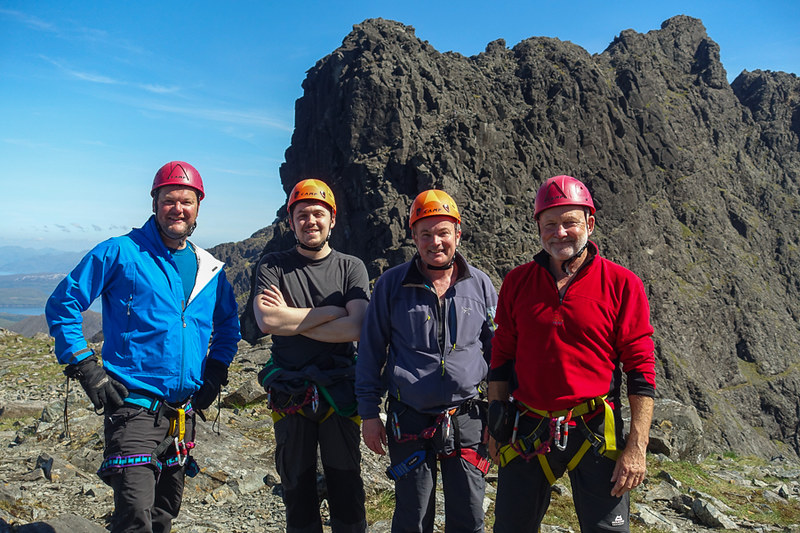 In terms of mountain porn this was a hard core day, up there with the very best, sweating, grunting and washing machines getting mended at record speed .(.. sorry, think I was getting carried away with the metaphor there). But there's always a sting in the tail ... and for me it was the descent down the An Stac screes, well, the top half at least. The bottom half was fine with even scree. Scree is the marmite of mountain walking, and I ain't a fan of the stuff with massive chunks mixed with eroded path, but I guess it gets the job done relatively quickly. 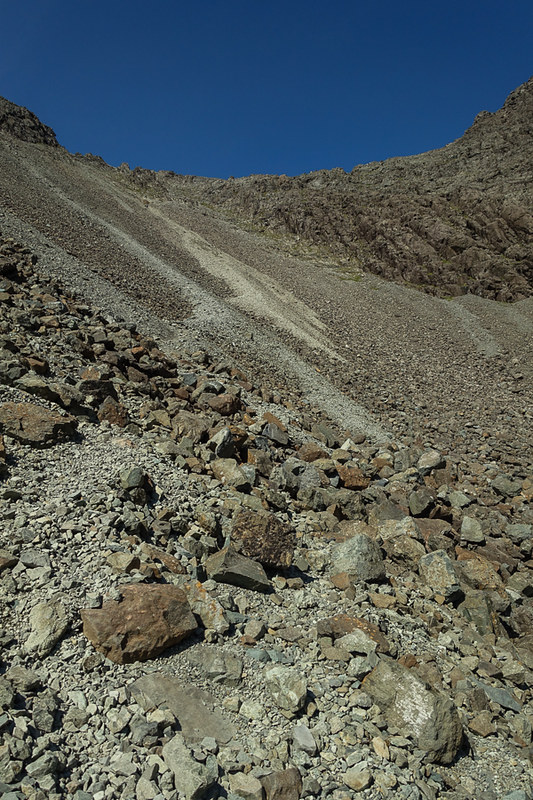 Once down, it'a another delightful walk out along decent paths, although care is needed down the steep and occasionally eroded path beneath the lochan. 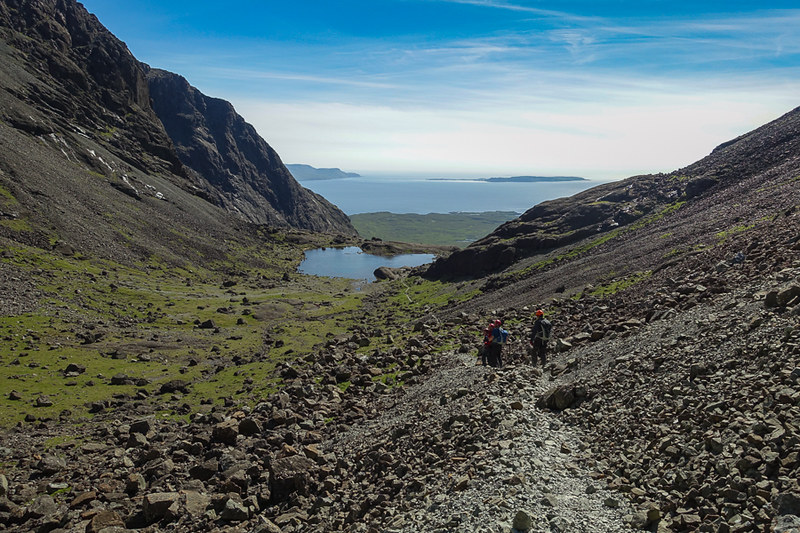 Remember to look back; moon rising above Alasdair: 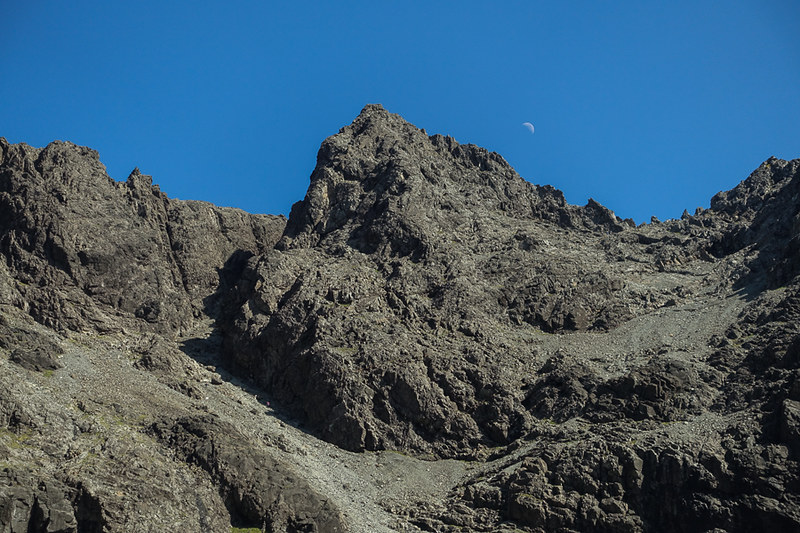 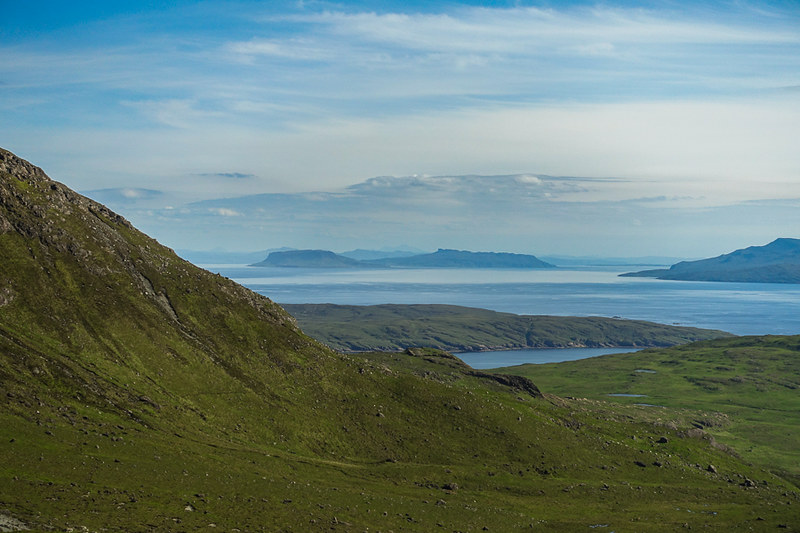 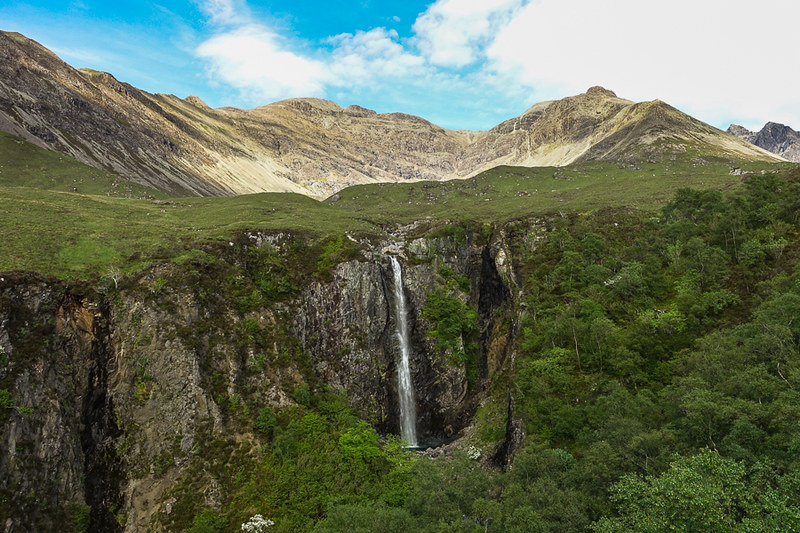 An epic day. We drove back to the bunkhouse in Carbost very pleased with ourselves; rucksacks were dropped in the room and we disappeared into the pub for a quick drink that seemed to turn into a slightly longer one ....
With an expert to guide us and look after us the Pin did not seem as bad as one might make it up to be, and was enjoyable, above all else. The only thing I'd say is that scrambling at that intensity is certainly helped by a decent level of physical fitness, a notch or two above that required for basic mountain walking. But, on the other hand, did struggling with my fitness lead me to not notice the big drop to the side? Hmmm, maybe... perhaps I'll have to do it again to find out

That's some amazing images you took, especially this one:

For my 40th I got a present of a climb of the Inn Pinn later this summer, this report has got me even more excited about it, you've given me the perfect preview, thanks very much! I can't wait, Skye really looks incredible...

I also love "scrambly traversing along the summit ridge of Sgurr Dearg":

and this one (and loads of others), you got such an amazing day out, looks like you all thoroughly enjoyed it!

Superb Jonathan, I'd agree that the Inn Pinn is surprisingly less daunting than you think once you're on it.

Not sure I'd have wanted "Camp" plastered over my helmet though, which is cause for innuendo enough

PeteR wrote:Not sure I'd have wanted "Camp" plastered over my helmet though, which is cause for innuendo enough

Ahem. I think you'll find it's an acronym for the Italian manufacturers Mr Riedel, "Concezione Articoli Montagna Premana", meaning "Conception of Articles for Mountaineering Made in Premana" - make of that what you will.

Nice set of of photos and good to see you got such a cracking day for it.
Did you have to take extra jelly babies for Paddy ?

Glad you got a fine day for it. Top notch photos too

Jdean wrote:Looks like a case of "if Carlsberg arranged a day out in the Cuillins"

rockhopper wrote:Did you have to take extra jelly babies for Paddy ?

No, but Paddy is now in possession of something with much more medicinal qualities ... (a doctor speaks ...)

Great report and photos of one of the most epic Scottish Munro's and a must do to complete as you point out for us vertigo sufferers,

Great stuff Jonathan. That was one fine hill day.

oooh lovely made me want to go back!

So chuffed that you got great weather for this biggie- its an unforgetable experience, which as you say is all over before you know it . ( Just like so many things

You may find this hard to believe but I had even better weather when I did this one . NB 'one'

Abolustely buzzing for this now

It doesn't get much better than this: the sexiest peak in the best place in the world, with good weather!!! Fabulous!

On the 3 occasions I did the IP, I was also fantastically lucky with the weather...

So many folk have have had to do it in typical Cuillin clag...