Creise is the way we are feeling...

Creise is the way we are feeling...


Summer days, driftin' away ... well, technically it was actually the last day of spring, but it was definitely summer weather (I even had my shorts on

) and with a few days off work, my thoughts turned to the two Black Mount Munros I still had to do, Creise and Meall a' Bhuiridh.
And yes, 'Creise' really is Gaelic for 'Grease'

! - definitely one of Scotland's oddest hill names. The word seems to have got itself into Lowland Scots too: for instance, I remember my Granny (raised in urban Kilmarnock, which is hardly part of the Gaeltacht) regularly coming out with statements such as 'Thank the Lord you young lads dinnae put thon Creesh in yer hair nowadays'...
However it got its Gaelic name (as ever, answers on a postcard, please), Creise is a fine hill but something of an awkward customer. The easiest way of bagging it (which is the website's standard route description) involves climbing Meall a' Bhuiridh from the Glencoe Mountain Resort, going over the connecting ridge to Creise, then re-tracing one's steps all the way back over Meall a' Bhuiridh and back down under the chairlift to the Mountain Resort car park. Quite apart from having to climb Meall a' Bhuiridh twice, the thought of going up AND down amidst all of the ski-related clutter didn't greatly appeal to me. However, any round-trip routes that climb Creise first involve a bit of scrambling

. The classic route is, of course, up Creise's steep north nose, the Gaelic name of which is, logically enough, 'Sron na Creise' ('Creise's Nose'). I'd eyed that one up on several occasions while driving past (there is a good view of it from the A82 in the vicinity of the King's House Hotel), but I reckoned it was a wee bitty outside my comfort zone in terms of steepness. There is, however, a somewhat easier scrambling route up the NE ridge of Creise's northern Top, Stob a' Ghlais Choire (as described in Ralph Storer's 'Ultimate Guide to the Munros') which I thought might just about be feasible for me, and which allows a nice circular route from the Glencoe Mountain Resort, so I went for that.

our_route.gpx Open full screen  NB: Walkhighlands is not responsible for the accuracy of gpx files in users posts
There was a nice view of the Big Buachaille from the car park as I set off. 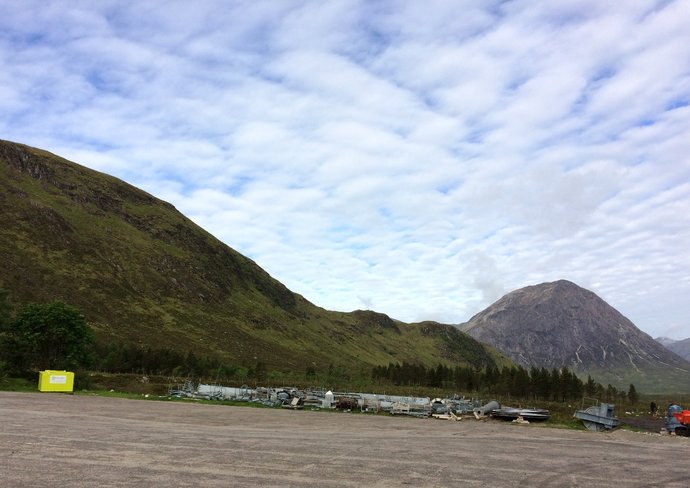 My initial route was to cut up to the right-hand side of the new mountain bike track just north of the car park, ignoring the 'Footpath' sign to the left-hand side of the bike track (which is the path up Meall a' Bhuiridh), and then turning off to the right (northwest) along the top of a patch of forestry to find a way round a long finger of Meall a' Bhuiridh's north ridge that blocks the direct route to Creise. There were only traces of path, but the going was reasonably good, and there were increasingly good views of Buachaille Etive Mor for distraction. 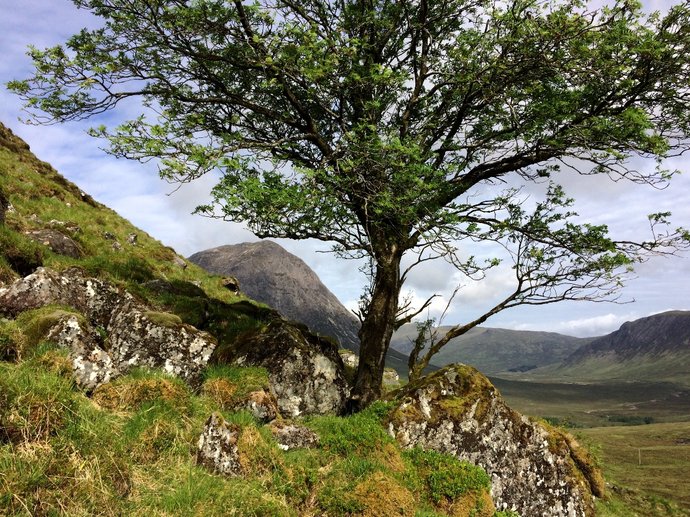 I soon turned the end of the ridge, and got my first proper view of Creise. 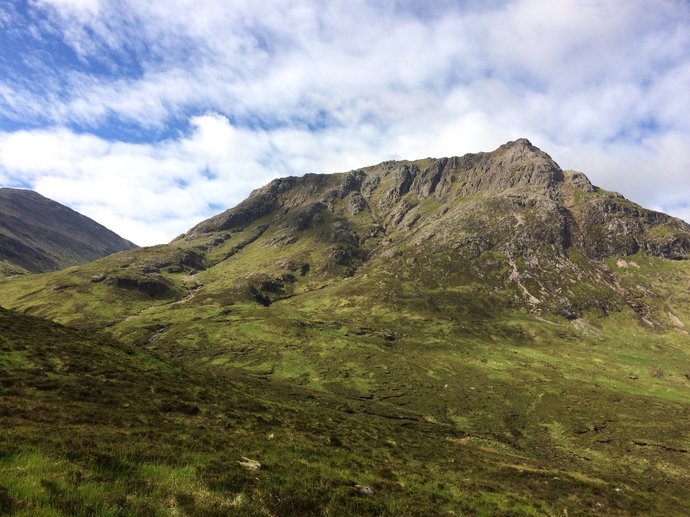 I picked up a more established path along the Allt Cam Ghlinne, which is the burn that flows down northwards from the Creise / Meall a' Bhuiridh bealach. There were several fine waterfalls on the burn and its tributaries. A bit higher up, I passed the top of a substantial hidden waterfall on the main burn, at NN 248526. This really looked rather impressive, and I was briefly tempted to take a detour back down into the gorge of the Allt Cam Ghlinne for a better look at it, but I had Munros to climb so in the end I didn't bother! I started to climb the grassy slopes at the start of Stob a' Ghlais Choire's NE ridge, getting a better view back down to the bigger waterfall as I gained height. 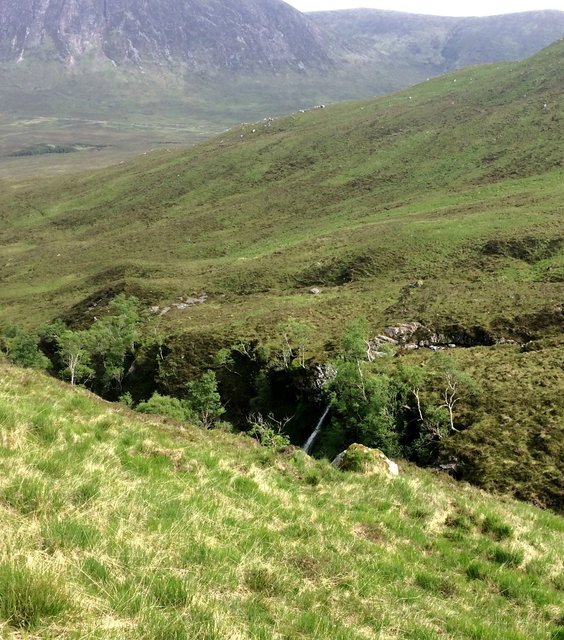 The ongoing ascent was starting to look a bit steep, and I wasn't sure of the best way up. In retrospect I probably made it harder than it had to be by sticking to the ridge line, meaning that I ended up having to tackle a rocky buttress head-on about halfway up. 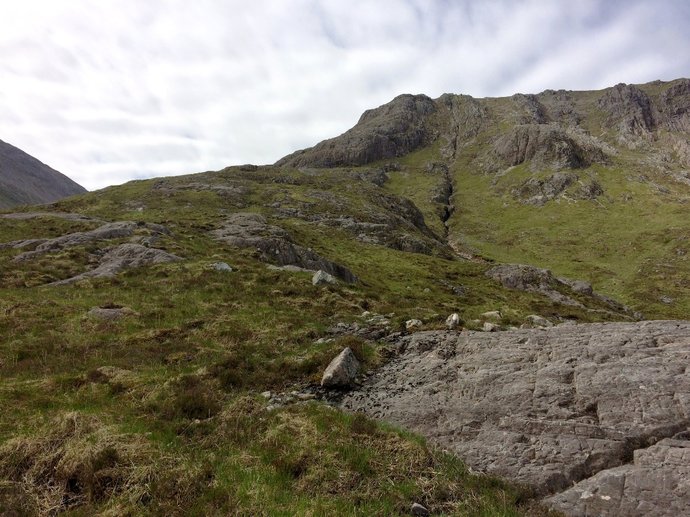 Although this is easier than the Sron na Creise scramble, I still found it moderately challenging. There are, however, almost certainly easier ways up this ridge by the looks of it, using grassy ramps on either side of the rockier bits. I took the direct line up, however.
Greased Lightnin' I was not 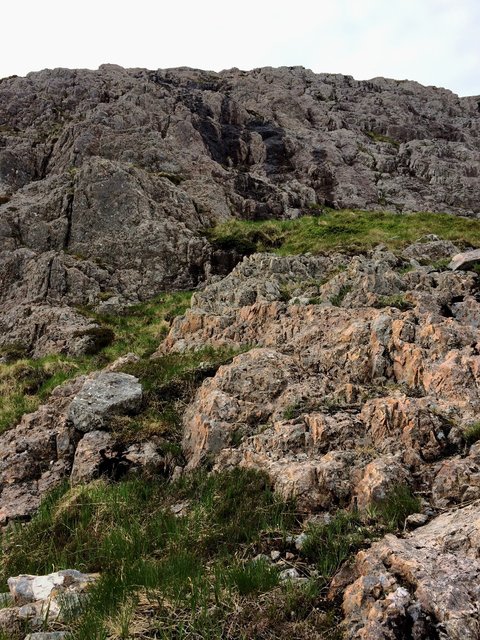 Good views were starting to develop out north: here is Ben Nevis on the left, with the King's House Corbett, Beinn a' Chrulaiste in the foreground. 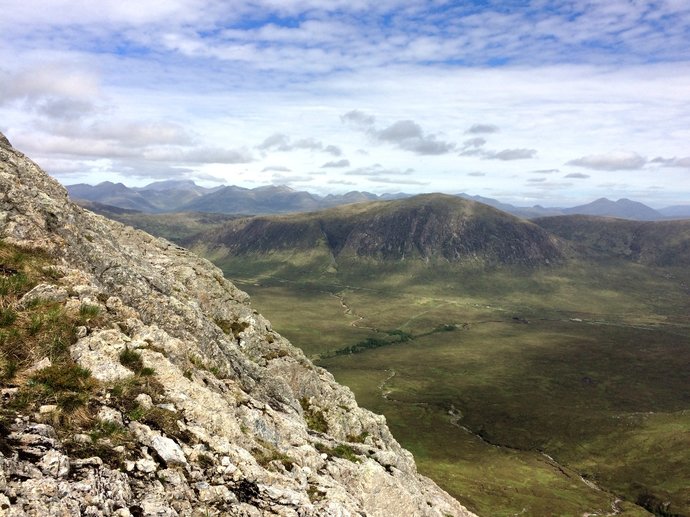 It was quite a relief to top out at Stob a' Ghlais Choire's summit rock 'castle', adorned with a fairly substantial cairn. From here, Creise's main summit was clearly visible further up the ridge to the left, with the Bidean nan Bian massif to the right and (I think) the Cruachan range in the distance - or is it just Ben Starav? 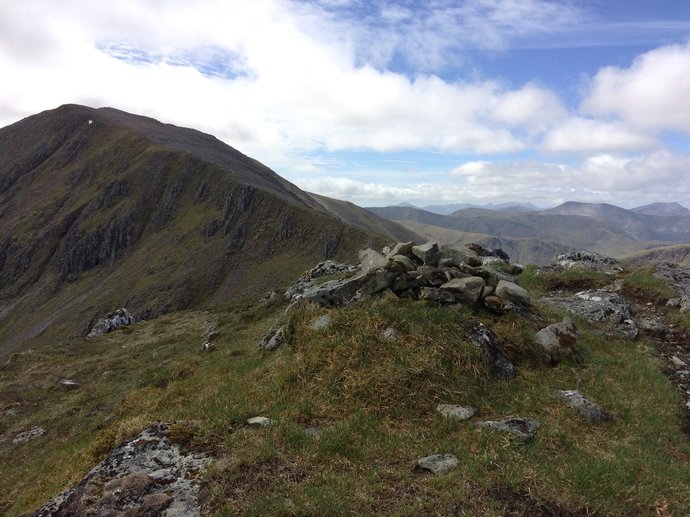 I headed off southwards towards Creise, with good views back to Stob a' Ghlais Choire. 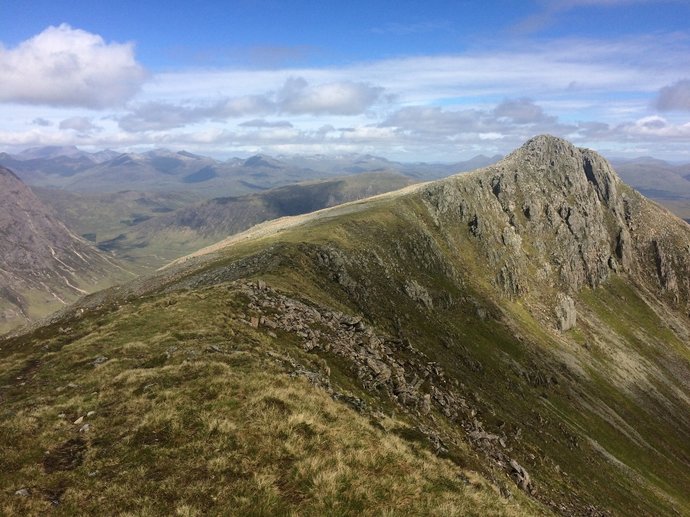 It wasn't far to Creise's summit cairn. This isn't the pointiest of summits (it's just the high midpoint of the ridge), but it does enjoy some very fine views. Here is the southwest end of the Buachaille Etive Mor ridge with the Bidean massif and Sgurr na h-Ulaidh behind it: 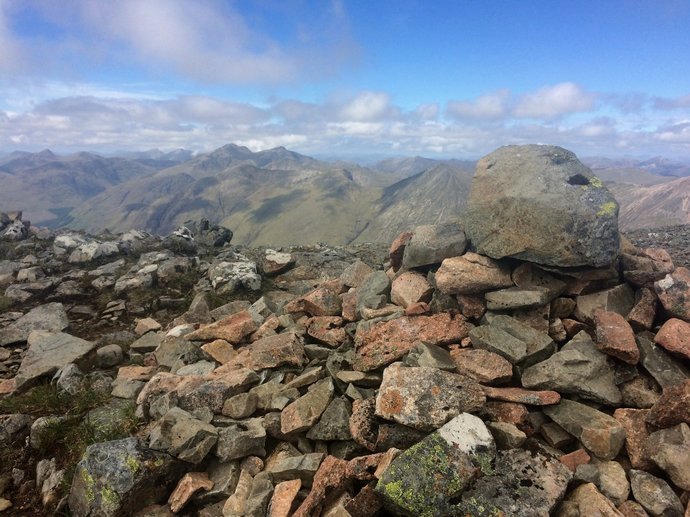 ...And the view across to Meall a' Bhuiridh, with Rannoch Moor on the left, and Schiehallion predictably photo-bombing the shot in the distance: 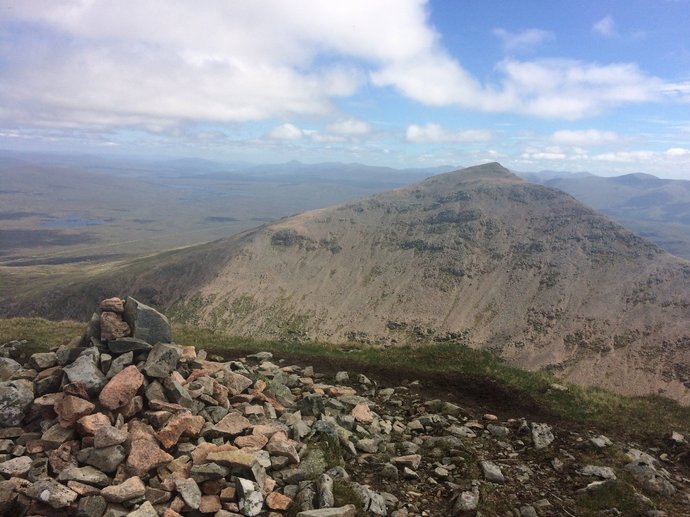 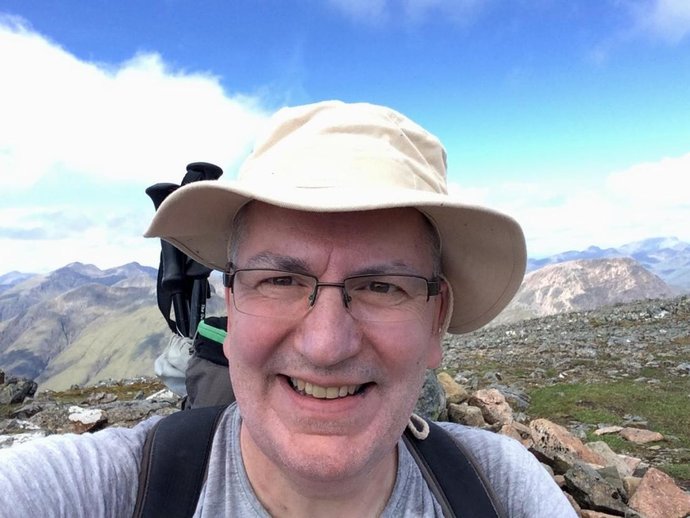 Since I was up here now anyway, I decided to make the short detour to pay my compliments to Creise's southern Top (and former Munro), Clach Leathad. It feels more of a 'hill' than Creise itself, sporting a larger windshelter cairn, and it was definitely worth the detour. 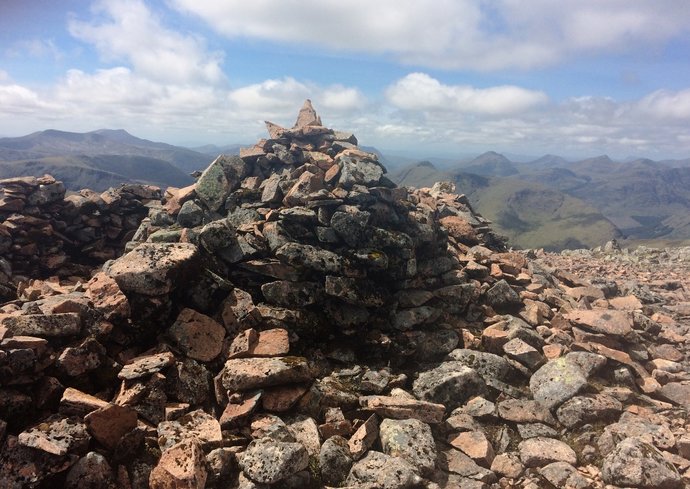 There was a good view south from Clach Leathad towards the complex Stob Gabhar massif, particularly its huge NW ridge, Aonach Mor. There is of course a classic route that traverses all four Black Mount Munros from the Inveroran Hotel to the King's House Hotel, crossing from Stob Gabhar to Clach Leathad via the start of the Aonach Mor ridge, but it involves a LOT of ascent, quite a bit of scrambling and ideally a car at each end ... definitely not for today! 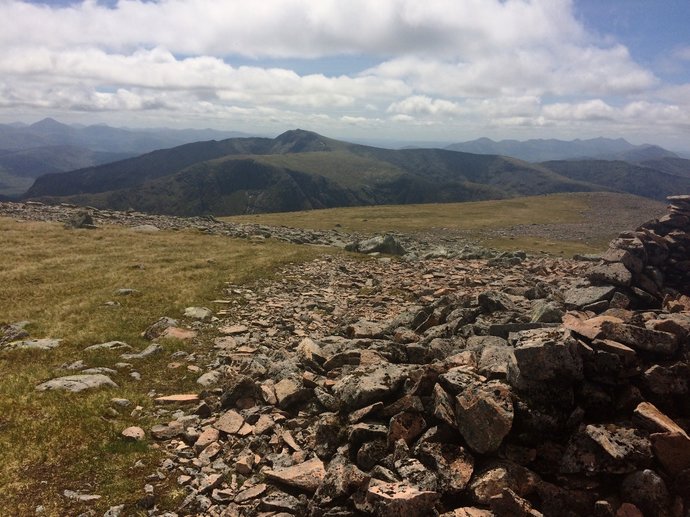 I headed off northwards again from Clach Leathad to the cairned minor top, Mam Coire Easain, where the path across to Meall a' Bhuiridh leaves the main Creise ridge. The initial descent down a steep eastern spur of Mam Coire Easain is mildly scrambly, but there is a good path (not particularly visible in this view back up from the bealach, but it is there all right), and on the whole this felt a bit of a doddle after the pathless scrambly ascent up Stob a' Glais Choire's NE ridge earlier in the day 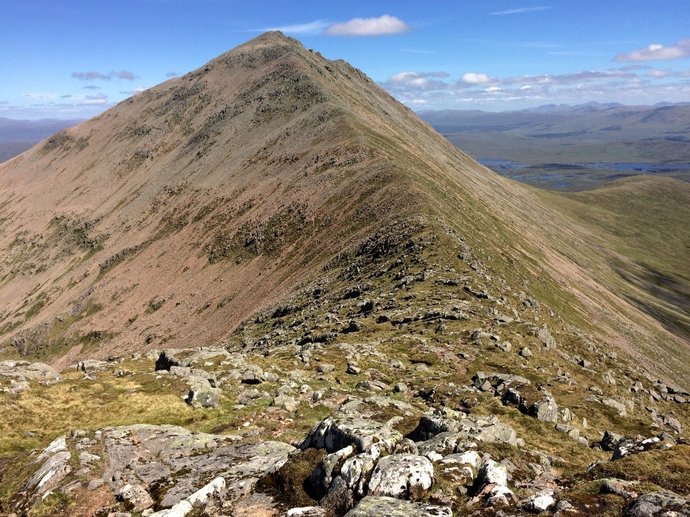 Meall a' Bhuiridh's summit cairn proved to be another very scenic spot. The wide, watery wilderness of Rannoch Moor stretched away on the right, with the Grey Corries looking very ... well, grey ... to the left. 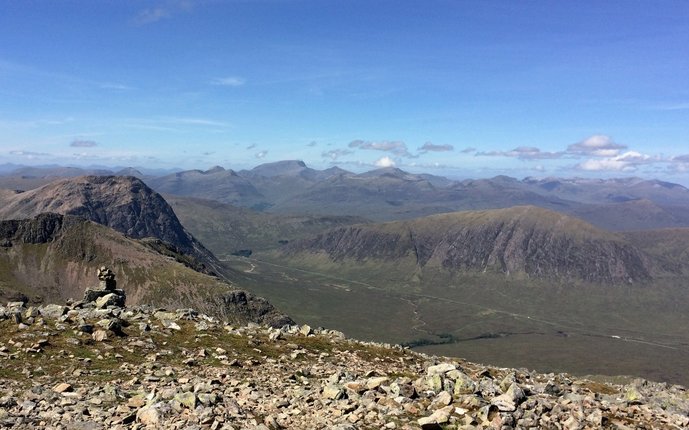 Looking to the south-west, there was an interesting view of Clach Leathad's impressive eastern crags, with Stob Gabhar behind it and the Cruachan massif (or Ben Starav??) again away in the distance. 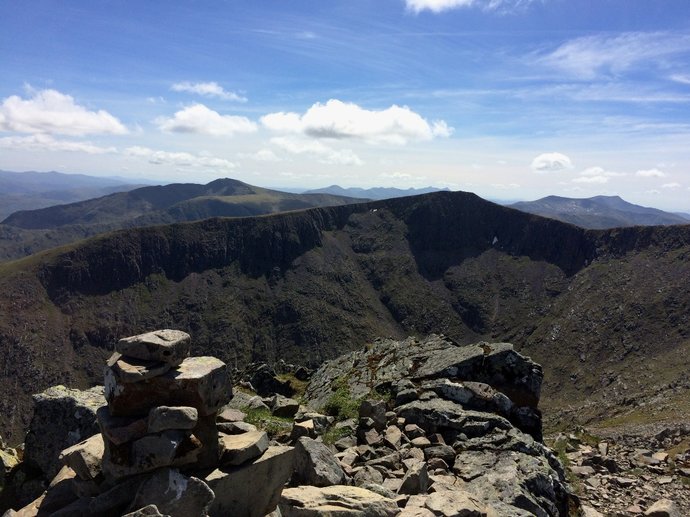 From the minor top just to the east, there was an impressive vista over the wide, watery wasteland of Rannoch Moor (something about it always throws me into a frenzy of alliteration

), with the Bridge of Orchy Munros (sometimes known as the 'Wall of Rannoch'; easy to see why from this perspective) in the distance. 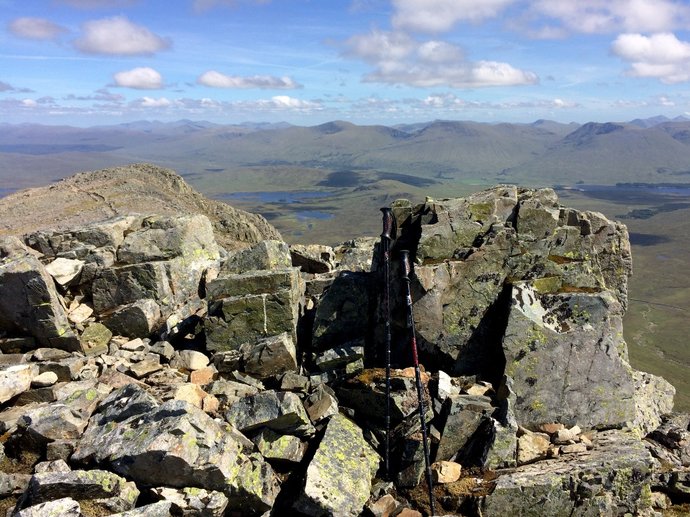 After all these High Jinks, the descent from Meall a' Bhuiridh was a bit of an anti-climax. It wasn't too bad at first, heading down the rounded and bouldery north ridge with traces of path to help, then cutting diagonally right to join the visible vehicle track that heads down to the buildings at the top of the chairlift. However, the optimistically signed 'Footpath' that heads down from the chairlift top station, passing under the chairlift itself, is a horribly eroded mess with a lot of loose, gritty stones that were doing their best (with some success) to make me fall over regularly, and I made rather heavy weather of it, particularly in the by-now sweltering late afternoon heat. To make it worse, I distinctly heard a couple of children passing overhead on the chairlift speculating on whether or not I had fallen off 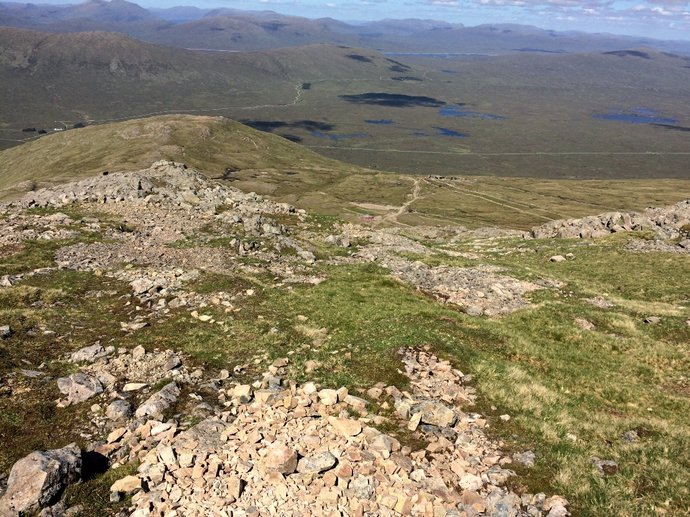 All the same, it was a straightforward route back down to the Mountain Resort car park, where I was very glad to finish off the half-bottle of water I'd left in the car.
A Grand Day Oot in fabulous weather

Great report. We did the same route this time last year and really enjoyed it, your report brought back good memories especially of the waterfall and I remeber loads of wild flowers along the bank.
That mountain path at the Ski Centre is horrible and this route at least means you only have to do it once.

Cairngorm creeper wrote:Great report. We did the same route this time last year and really enjoyed it, your report brought back good memories especially of the waterfall and I remeber loads of wild flowers along the bank.
That mountain path at the Ski Centre is horrible and this route at least means you only have to do it once.

Thanks! Yes, that area around the Allt Cam Ghlinne is particularly beautiful, with all those waterfalls, plus lots of wild flowers at this time of year as you say.
It is a bit of a shame about that descent path from Meall a' Bhuiridh, though

. While I realise that the Mountain Resort have no particular vested interest in catering to walkers, the eroded footpath isn't very scenic and does detract a bit from the look of the place. I do wonder (admittedly as someone who knows nothing about the economics of the thing) whether they couldn't apply for a grant from one of Scotland's conservation charities to do up the footpath a bit .... just a thought.

Good route and you got great views It was a good day to be out.
Remember walking down back under the ski lift./tows/whatever they're called. There were loads going up with their bikes. They must have been looking at me thinking " look at that idiot trudging through the hills" and there was me looking up at them thinking roughly the same. Older you get I suppose- each to their own.
Cheers kenny