Decidedly hung over from the Clachaig with Sean, after porridge and tea, checked out of Glencoe SYHA into a really wet misty dreich day, cloud was very low in the Glen and lots of overnight rain. Driving down Glencoe to the ski centre it began to rain heavily. Started out at 9 from the Ski Centre in clouds of aggressive midges across very boggy ground around the long annoying spur of Meall A Bhuiridh' North Ridge to get to the mouth of Cam Ghlinne. I disturbed a big Mountain Hair who bounded off revealing a last remaining bit of white winter on his arse. Going was slow and slippy but gave me time to consider the route. I could see Sron Na Creise the North Ridge which is apparently the trickier scramble. Was concerned about the wetness of the rock and the poor visibility with more rain forecast. When i turned and began the ascent of Cam Ghlinne it was decided i would go for the apparently easier and shorter NNE ridge, still a sustained scramble and looking actually steeper at the Southern end of Creise's Craggy North East Face, but Ralph (Storer) says there are escape routes and bypasses and you can pick your line of difficulty so given the wet i went for the "easier" scramble. Alt Cam Ghlinne turns out to be a beautiful narrowing Glen with several beautiful waterfalls along the way. during one of several photo stops i saw a big herd of red deer up ahead on the corry wall, not too far off. Lots of little frogs too. 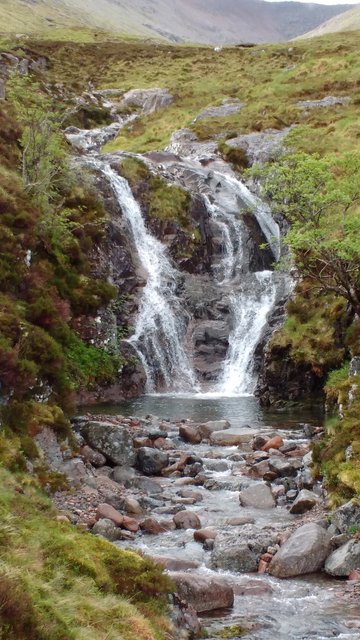 Crossed the burn a little too far up and had to traverse steep grassy hillside to get to the crest of the spur which takes you up to the NNE ridge proper. Time to say goodbye to any semblance of a path for some time. When the grass runs out a rock wall faces you. Poles stowed and i began the scramble with the aim to stick to the crest of the ridge as far as possible, go up the middle and stay on rock as grassy bypass routes looked steep and exposed in the wet.