Not the east ridge of Beinn a' Chaoruinn

Not the east ridge of Beinn a' Chaoruinn

You can't add italics into the titles of these reports, otherwise this one would make more sense - Not the east ridge of Beinn a' Chaoruinn has a slightly different (and more accurate) meaning!

Mum was doing the East Highland Way, and dad was offering support and transport along the way (as she doesn't do backpacking). I skipped work and took the train down to Newonmore on Thursday to do a bit of hillbashing with dad. While they had long passed the Moy Dam (they had stayed at Laggan Bridge the night before and mum was walking to Newtonmore today), dad faincied going back over to the west to go up Beinn a' Chaoruinn, which he had never been up. It was pretty much the only thing I didn't have a map with me for, but it sounded good - I casually suggested the scramble on one of the eastern ridges.


Map.gpx Open full screen  NB: Walkhighlands is not responsible for the accuracy of gpx files in users posts
The weather was grey, but at least it wasn't hosing down as forecast. We parked by the dam on the A86 and made our way back up the road past Roughburn to the forestry track which skirts the southern flanks of Beinn a' Chaoruinn. 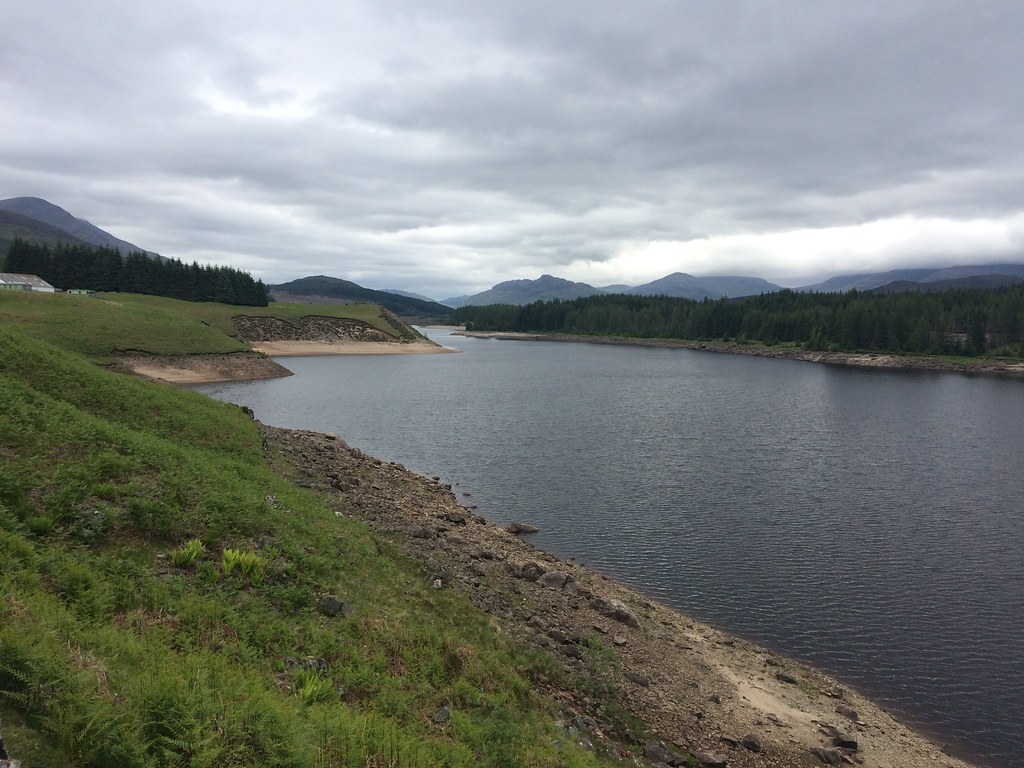 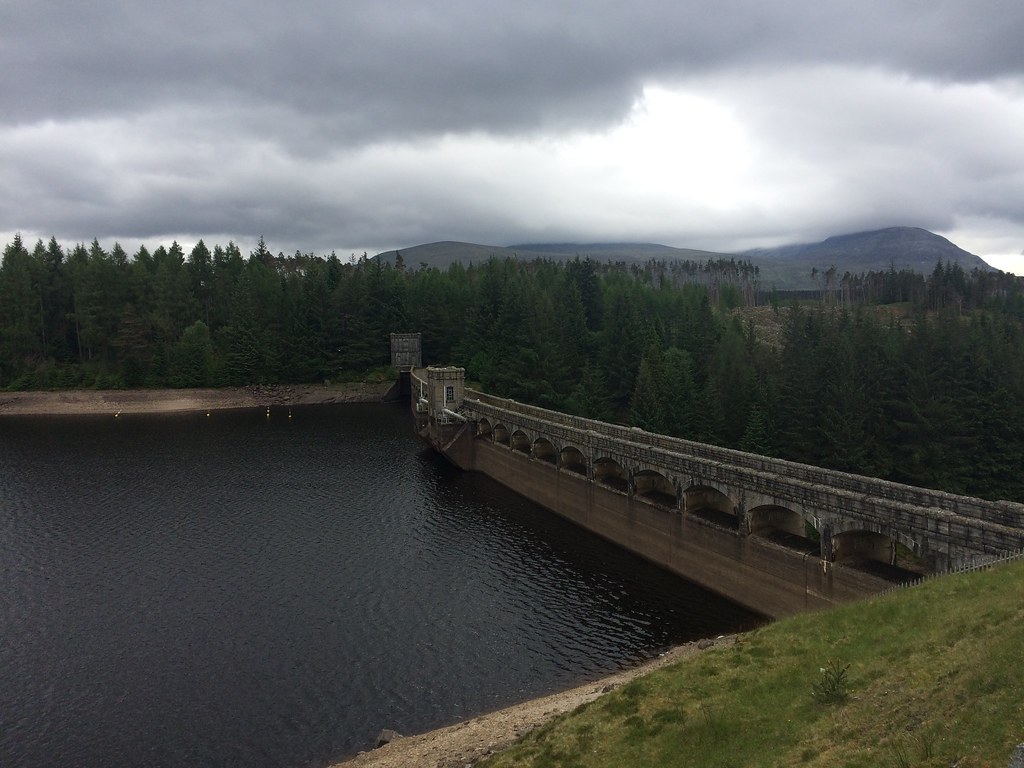 Plenty of felling along here, and rather a hard-going new surface (stones are a bit on the large side for walking), so no great excitement on the way round to the east of the hill. Once the track up into Coire na h-Uamha branched off, the going became more pleasant. Although the map shows the track ending in the middle of the woods, I had a feeling it went right up to the upper edge of them, and thankfully I was right. 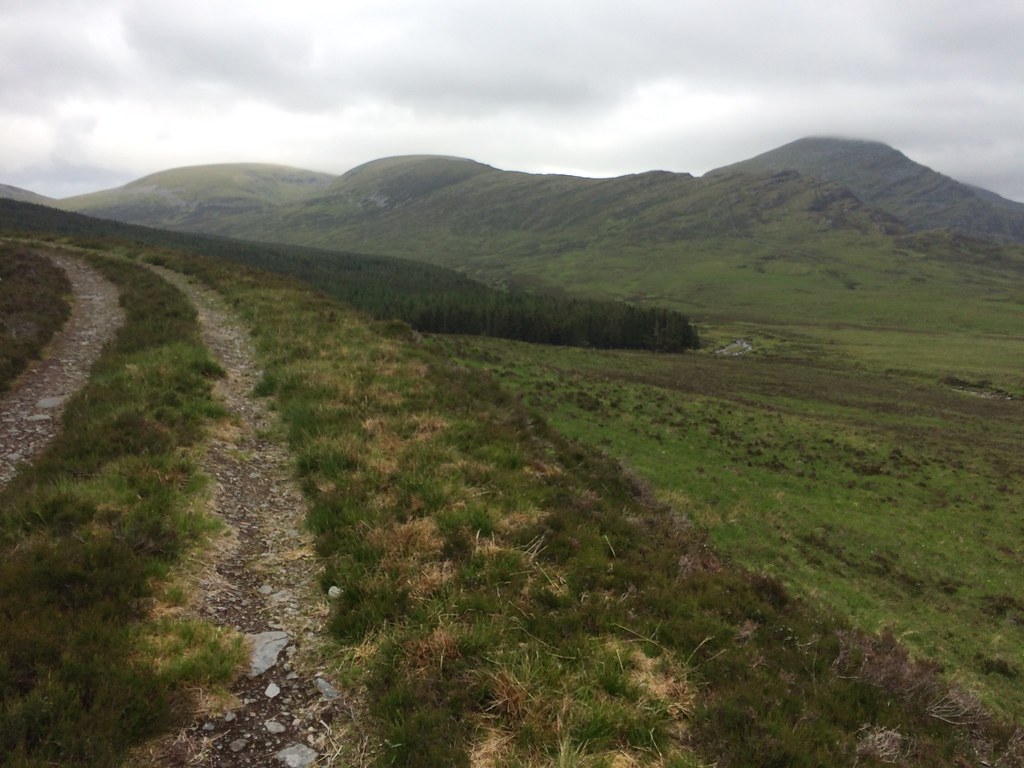 Although the summit was in the cloud, we could now see the eastern ridges, the one with the scramble on it looking rather more formidable now we were right under it. It was spitting with rain, but we decided to stop for lunch and consider our options.

East face of Beinn a’ Chaoruinn: 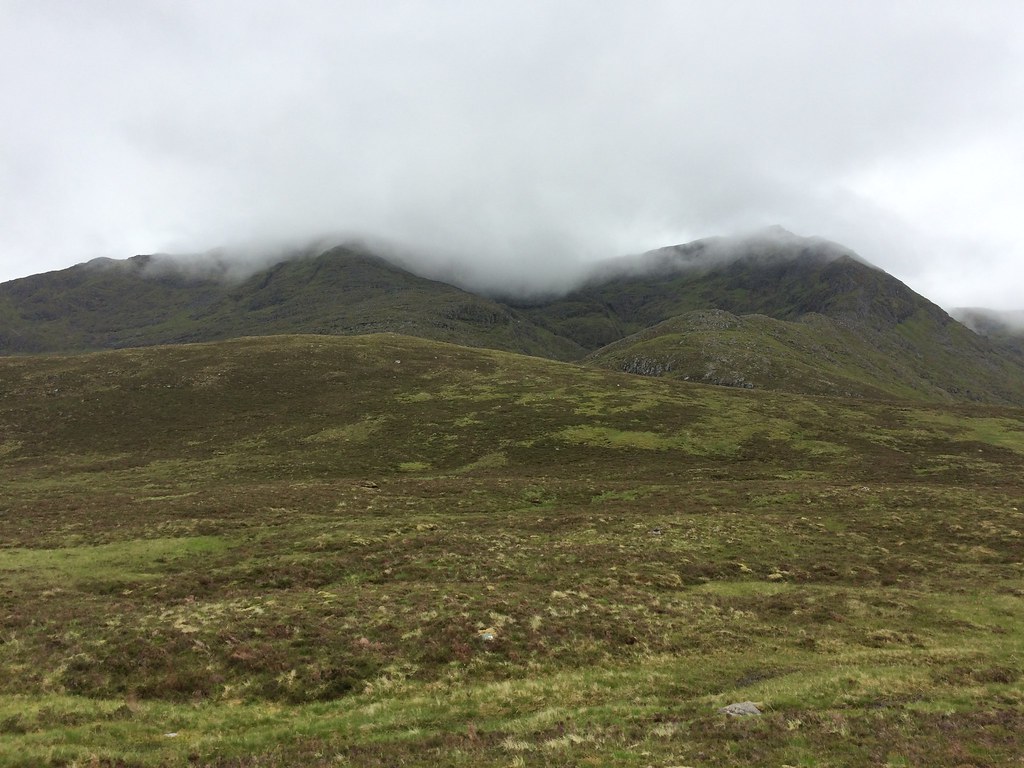 We decided to head up into the corrie anyway, rather than take the longer route via Bealach a' Bharnish. The more southerly of the two spurs around Coire Ban looked to be steep but mostly free of scrambling, and the inevitable greasy rock that would be lurking today, so we went for that instead. 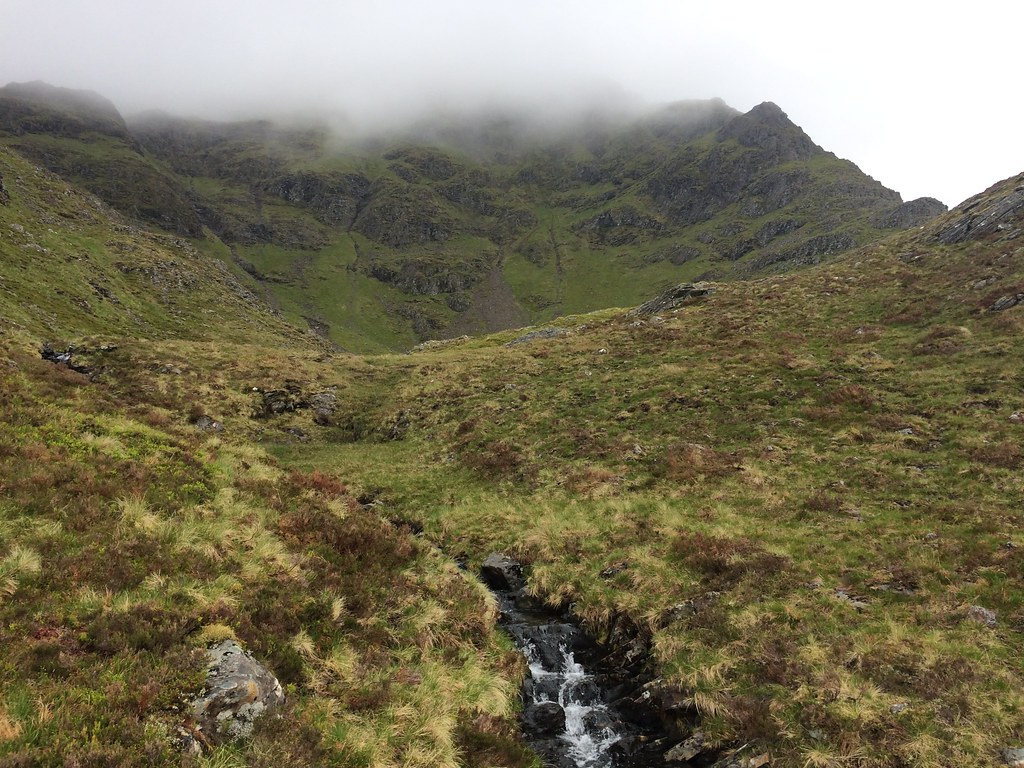 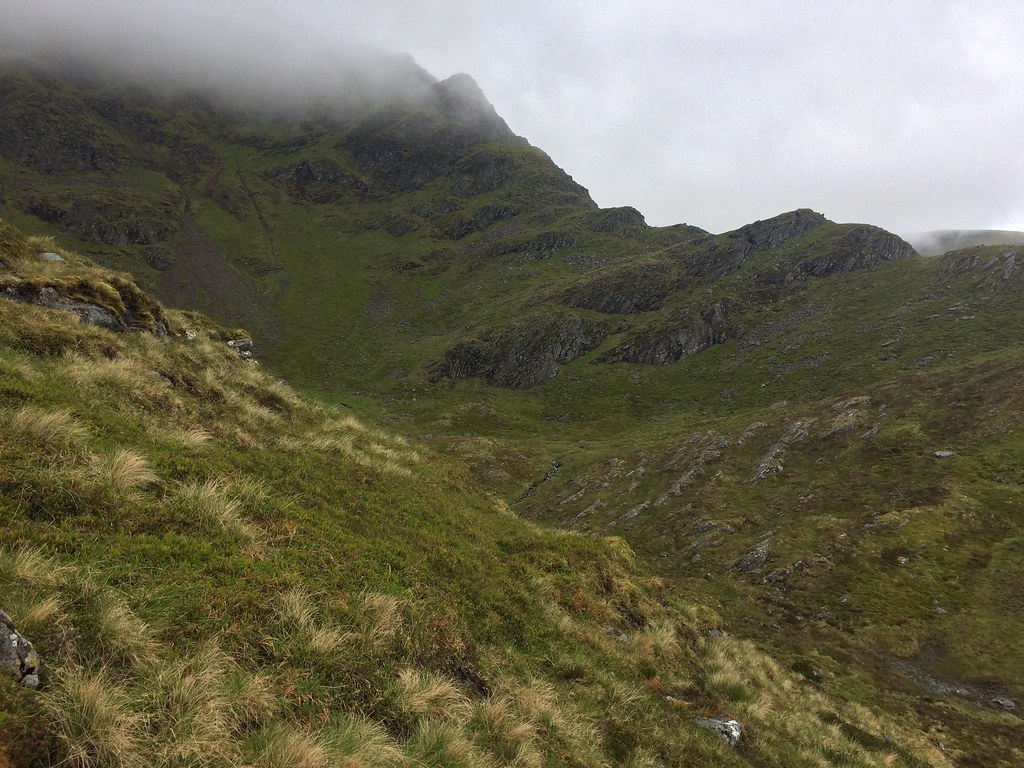 It was very steep in places, and still marginally scrambly, but the ground was good enough underfoot to make it more interesting than wandering up the usual way on the western flanks.

Last pull to the summit: 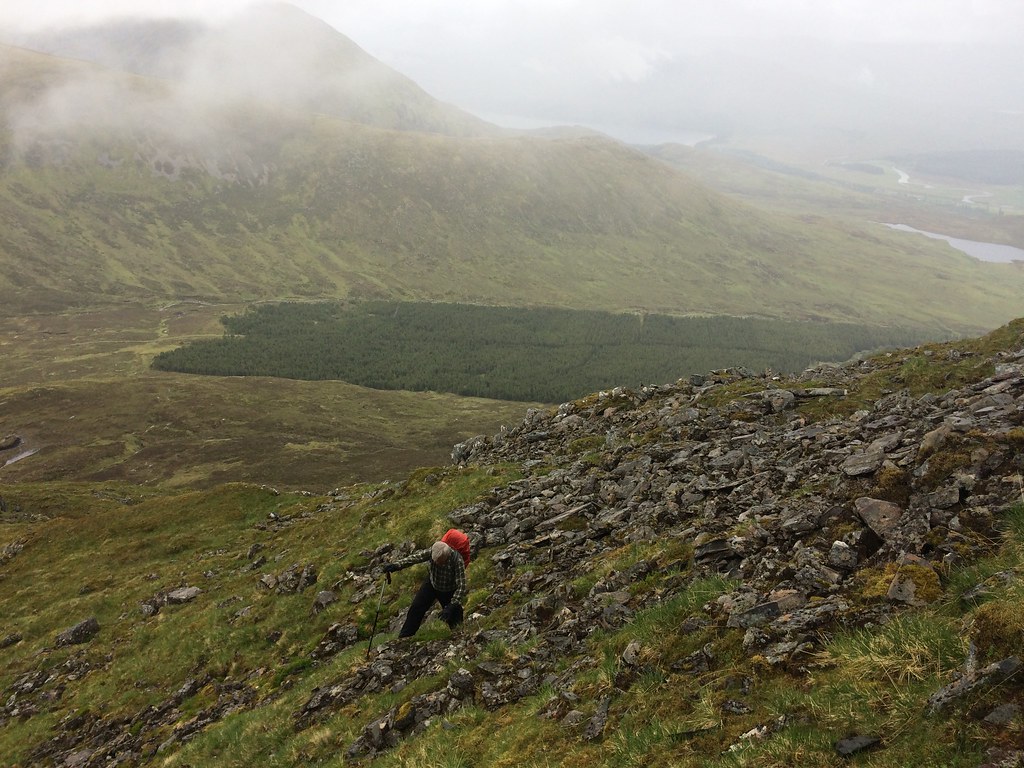 …or is it really the summit? 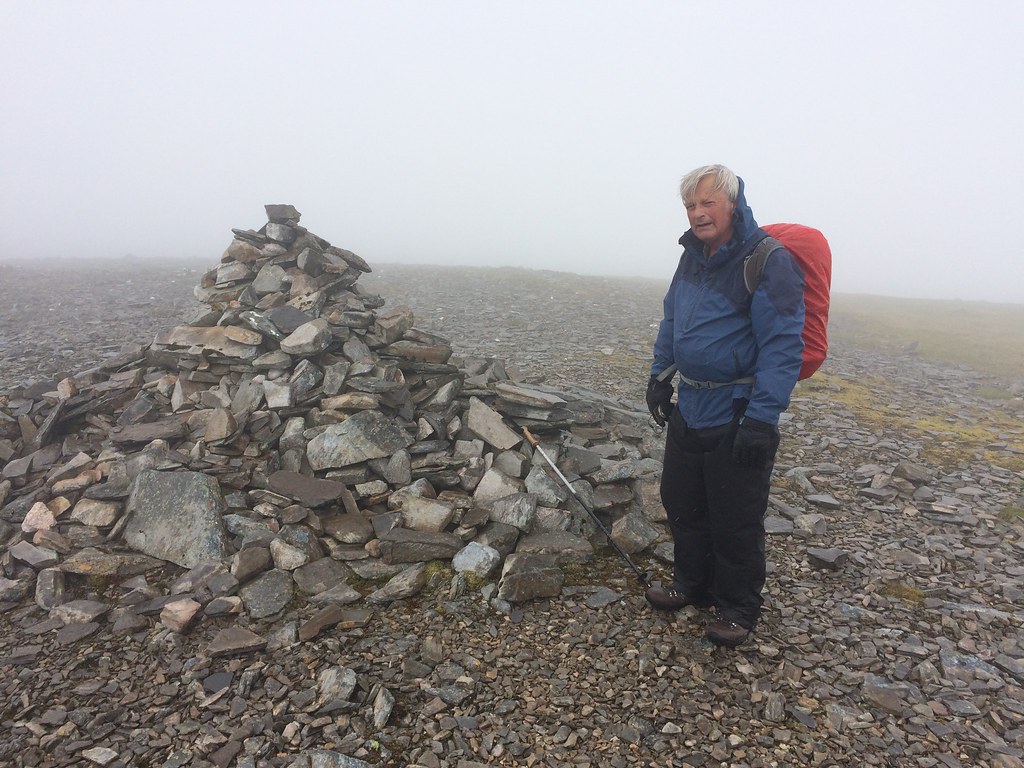 Dad's map showed the northern-most summit as the highest, but I had a suspicion that it was wrong; however we couldn't be bothered to make the short detour to the next cairn north, and decided to head down instead.

This was the first Munro I went up on my own, at the age of 14. Hard to believe that was 22 years ago now - it certainly feels a lot less! I think the weather had been slightly better then, but not much, and I joined the rest of my family on Beinn Teallach afterwards. 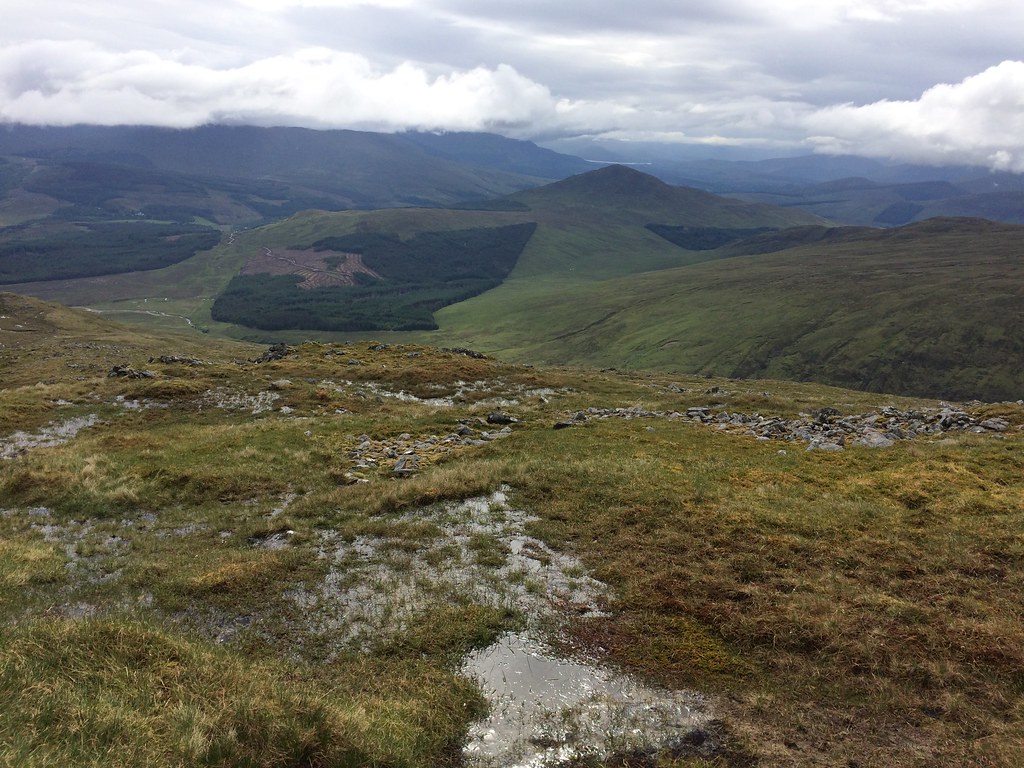 The weather improved on the way down and the sun almost came out, so we had another stop. We were descending down to the Allt a'Chaoruinn, but I suspected there was a small shortcut to be had through the woods. Fortunately I was right! 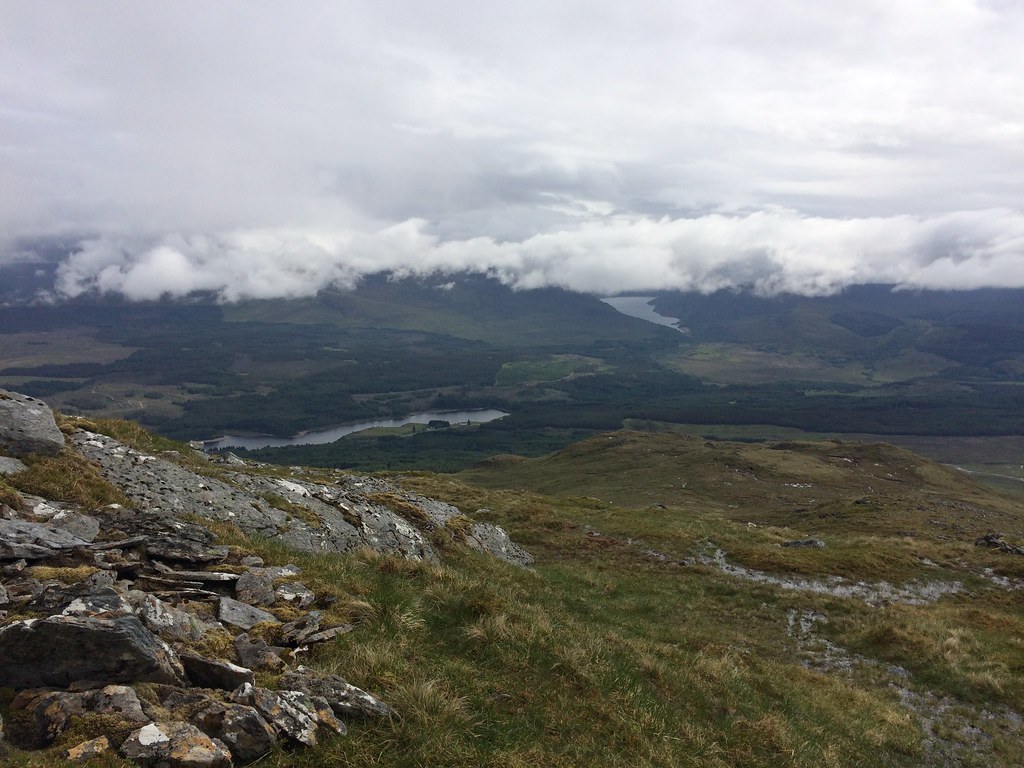 Back at the car, we just about had enough time to get through to Kingussie so I could catch the 7:15pm train home. The choice of location hadn't been a bad one - the weather had actually been worse over on Speyside. While we didn't see a great deal today (or even get to the correct summit), it certainly inspired me to go back and have another go at the eastern ridge sometime in the not too distant future.

Re: Not the east ridge of Beinn a' Chaoruinn

Interesting report. That side of 'the hill of the rowan' looks very impressive and any route up it adventurous. I imagine there would be some great routes up there in decent winter conditions, especially the east ridge! As you probably know, the final chapter of Robert Macfarlane's Mountains of the Mind, called 'The Snow Hare', includes an account of a winter ascent of 'one of the east-facing ridges' of Beinn a' Chaorainn - very likely the one you and your dad went up!