4 munros from Ben Lawers car park - on a rainy and windy day.

Started from car park using the "highway" path (an excellent path) up to Beinn Ghlas - in bad visibility the blind summits might makes it fell a bit harder than it actually is. Beinn Ghlas summit cairn. The white background is not something I added with an editor, that is the special cloud background you will see on the pictures from Beinn Ghlas and Ben Lawers. If you are in doubt, that's the way to Ben Lawers.

Continued up to Ben Lawers. Until this point no views, only surrounding clouds. Heavy rain and the strong wind did not the experience much better and at this point I decided to turn back to the car park as I at this point was wet inside out. As it turned out, I should probably have started a bit later this day as the weather changed to the better. Anyway, An Stuc was going to wait for another day. 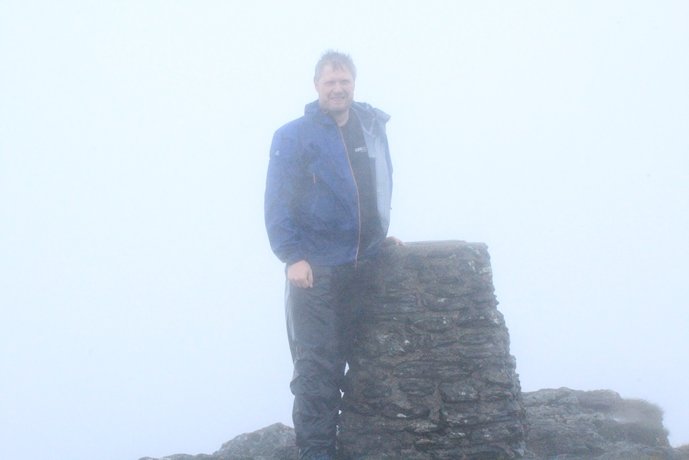 Retraced the path down of Ben Lawers but took the path below Beinn Ghlas to the bealach between Beinn Ghlas and Meall Corranaich to avoid unnecessary climbing and to keep the option open to climb Beinn Corranaich.

Almost at the bealach it seemed like the clouds began to lift a bit. 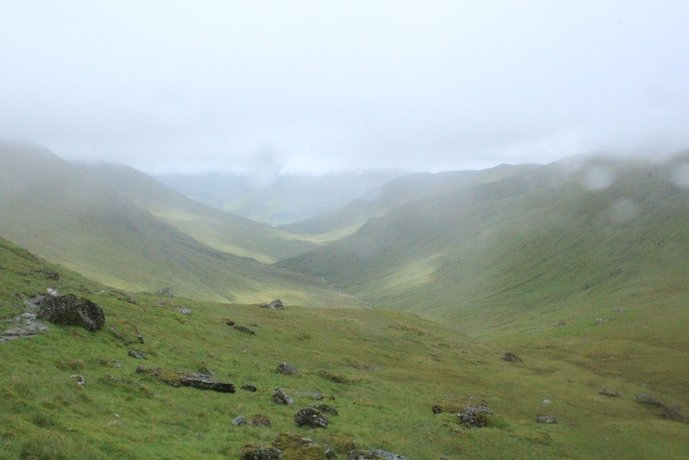 I changed my plans again and decided to climb up to Meall Corranaich, hoping to get a bit of a view of whatever. A good decision. From the bealach there is a path all the way up. The path starts crossing the bealach and the ground is boggy, of cause. Then it begins the climb, quite steep some places and some places a bit exposed. During the climb the first views of some of the tops appeared. An Stuc was the first one to show its top. The nice thing with this climb is, there is no blind summits. You climb, the hill side is leveling out, and there you are, Meall Corranaich. With the change in weather, no rain, I continued along the ridge to Meall a'Choire Leith. This was the best part of this day's walk. The clouds moved up, and all tops in the Lawers ridge became visible.

It was hard to end the short eat and drink break with these views. 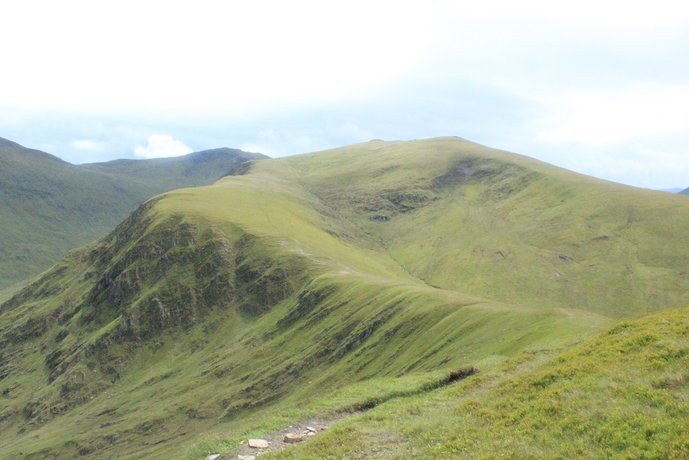 Looking back where I came from: Meall Corranaich 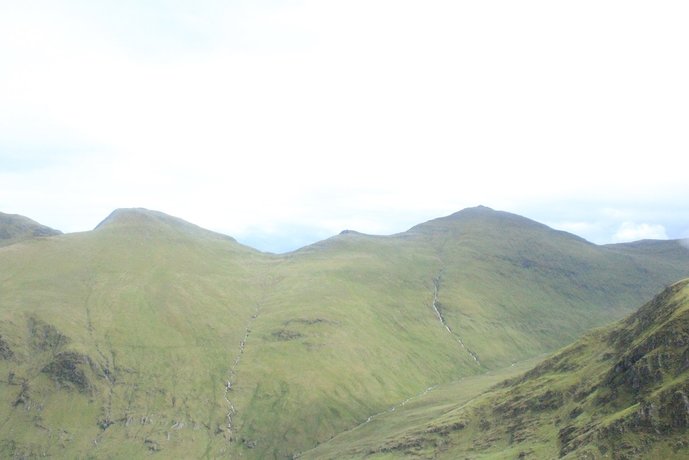 Across the glen: An Stuc and Ben Lawers 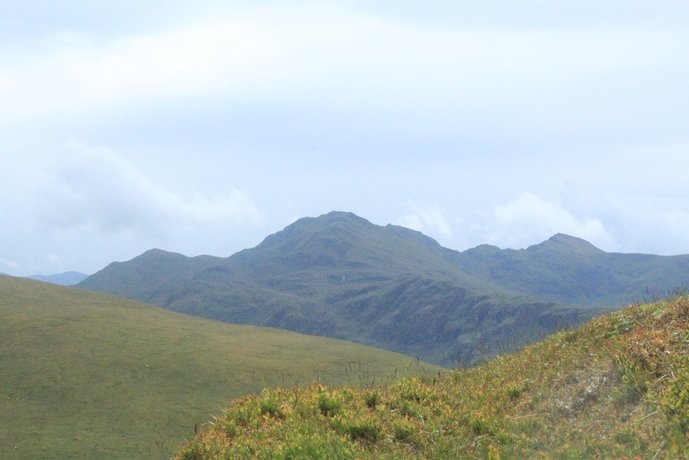 The summit of Meall a'Choire Leith is quite flat and you have to move a bit around to get some good photos down the hill sides. 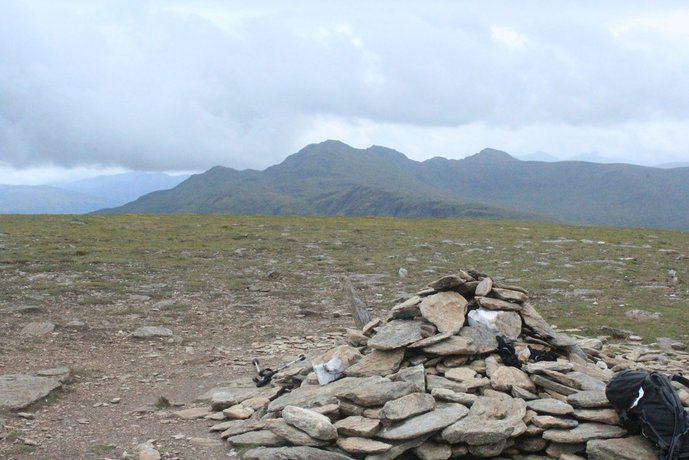 From Meall a'Choire Leith there is no clear path down to the south west first, but in clear weather, head against the end of the Tarmachan nothern ridge. You will find a faint path down the steep hill side. You need to cross a stream when the steepest part is over, head for a big rock, where there a some good opportunities to cross the stream. The ground is boggy right before this stream and almost the rest of the way down to the tarmac road. You need to cross another stream when you slightly turns south out of Coire Gorm. You will see something looking like a dam. Head just right of the dam, the water is low here and you will easy cross the stream. Crossed the stream, it is hard to find a trustworthy path, the ground is very boggy. Head south west, against the lowest point between two minor hills in front of you. Eventually you will find a good clear path, go right and continue down to the tarmac road. Follow the road south along the Lochan na Lairige with amazing views towards the hill side of the Tarmachan ridge on the opposite side of the reservoir. I also found the dam construction interesting. The walk back to the car park on tarmac road is approx 4 km, and to me that was a pleasant end of the walk.

I think, even the going down from Meall a'Choire Leith is boggy and slow, it is still faster than the alternative, that is going back over Meall Corranaich and descending by the steep path to the bealach below Beinn Ghlas and returning by the path from there to the car park. It might gives you nice views, but you will have to re-ascend approx 300 meters up Beinn Corranaich, and that was the main reason I dropped that option.


Ben_Lawers_4_munros_circuit_994nodes.gpx Open full screen  NB: Walkhighlands is not responsible for the accuracy of gpx files in users posts

Final comment: as english is not my native language I want to address that I do not intend to harm, upset or annoy anyone with this walk report

. I simply want to share my experiences. Anyway, I have great fun reading walk reports on WH especially when I plan my travels from Denmark to Scotland and I am very glad to have access to all the good info contributed by the other WH users. I simply like hill walking, and using WH has become a part of the. Thank you

This walk was actually day 2 out of a week in Scotland - maybe some other WR's will follow for the other days:
6/12: Stuc an Lochain + Meall Buidhe
6/13: Beinn Ghlas + Ben Lawers + Meall Corranaich + Meall a'Choire Leith
6/14: Meall na Tarmachan + Schiehallion (two separate walks

An Stuc is better from the other direction

Good to see that jumbled mess of iron posts have gone from meall corranaitch.

Good report Yesper and it sounds like a great day out. I did Beinn Ghlass and Ben Lawers in exactly the same conditions earlier in the year and intend doing them another time to make up for it so will probably do the same route you just did.

Never apologise for writing any report in English when it's a second language - if I had to do it in Danish nobody would ever be able to read it and my English probably isn't as good as yours either.