These two munros have been on the to-do list for a while.
We first looked into Glen Affric whilst having our lunch on the summit of Ciste Dubh about four years ago, we could see the youth hostel and the mountains above it, at the time I didn't know their names so, when I got home, I looked them up and discovered I'd heard of one, Carn Eige, a name I'd seen on the maps, right in the middle of nowhere.
Tom a' Choinich and Toll Creagach are described as the easier Glen Affric munros for access, looking at the map I could see they gave a good view point for the other Glen Affric munros and the four Mullardoch munros too.

The weather for the 14th June was given out as being overcast with the chance of later sunshine, the only downside was the 30-35 mph wind with 45 mph gusts, as it turned out the forecasters were pretty spot on.

We set off for the parking spot at Chisholme Bridge and discovered that the hydro worker dudes were using it as a place to park their heavy machinery, we had a reccy down the glen on Sunday and saw that there was a very large level area off the road about 400yds further on from the bridge so we headed for that and found a good little dry spot for the car in a corner, my only thoughts on this are that the parking spot by the bridge is ok at the weekend but during the week an alternative has to be found.

Looking back from the bridge, the parking spot is a few yards past the trees in the distance. 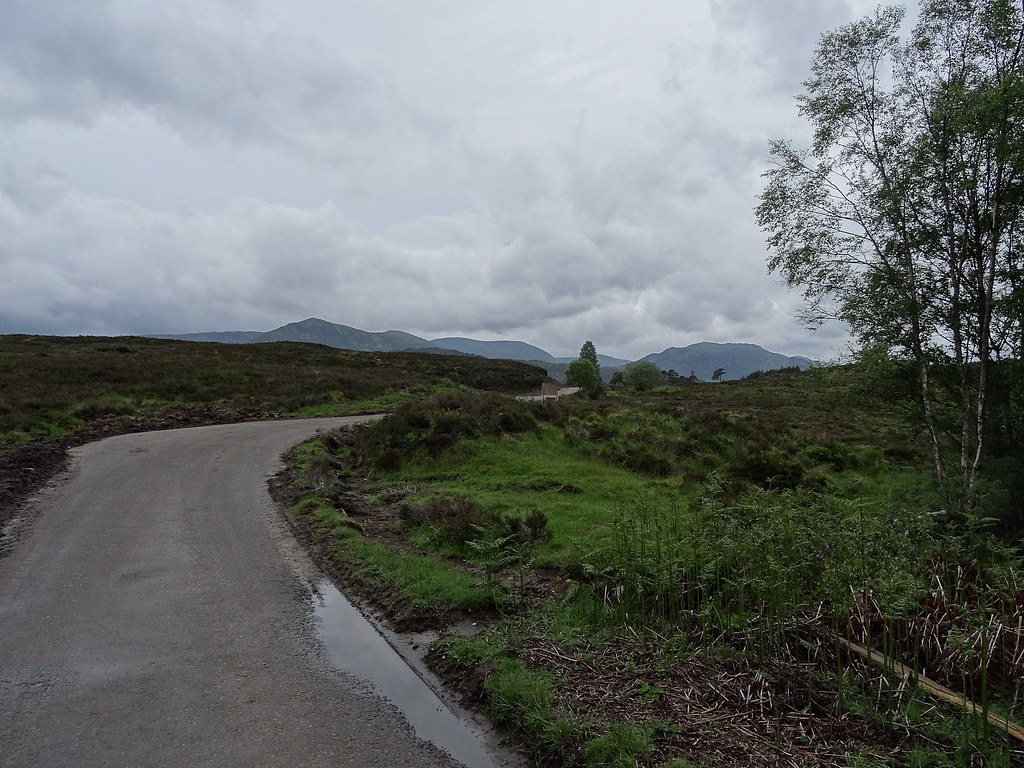 Looking towards Loch Beinn a' Mheadhoin from the bridge. 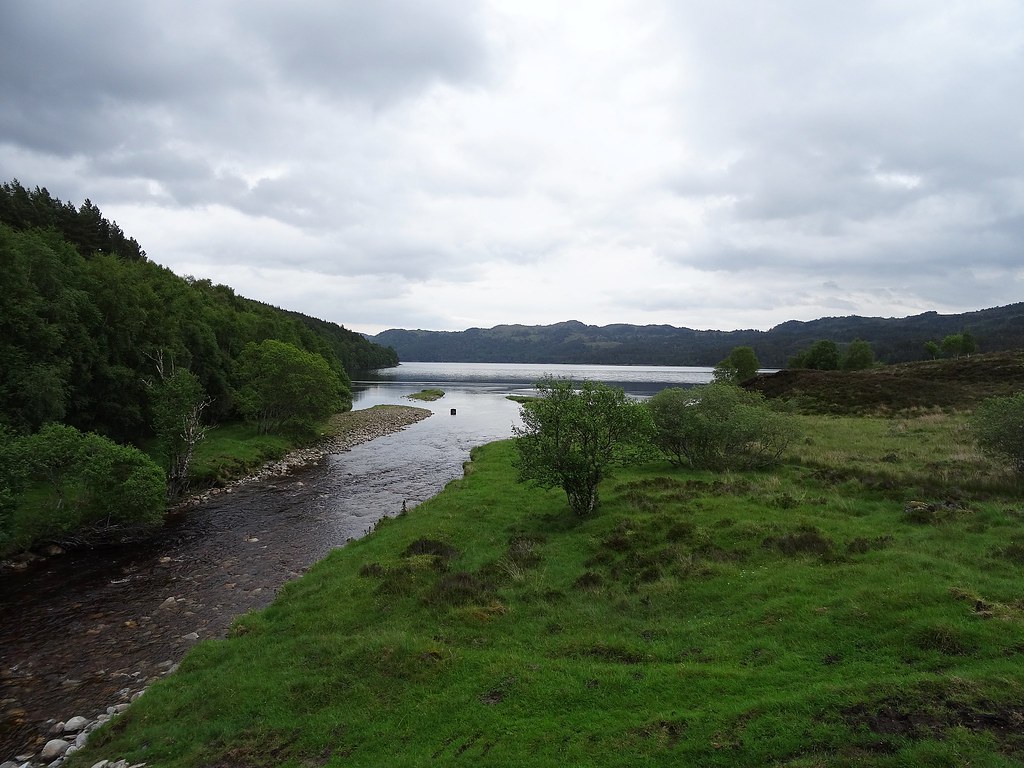 Ready for the off we walked back to the bridge and set off on the track, well, should I describe it as a "wide scar", the Hydro works being carried out at the moment has turned this section of the walk into an ugly scar, there are pipes, digger buckets, piles of discarded wood and boulders dug up and dumped along this whole section. All this was noted in The Rodmeisters " Corbetts from Strawberry Cottage" walk report and I fully agree with his comments, it's a mess and I can't help thinking its going to take a long while to recover, looking at the photo's Blackpanther posted in her reply to Rods report it'll never be like it was before this work, it's a massive shame, it really is, it's a shame progress has to be so destructive, lets hope its tidied up respectfully. 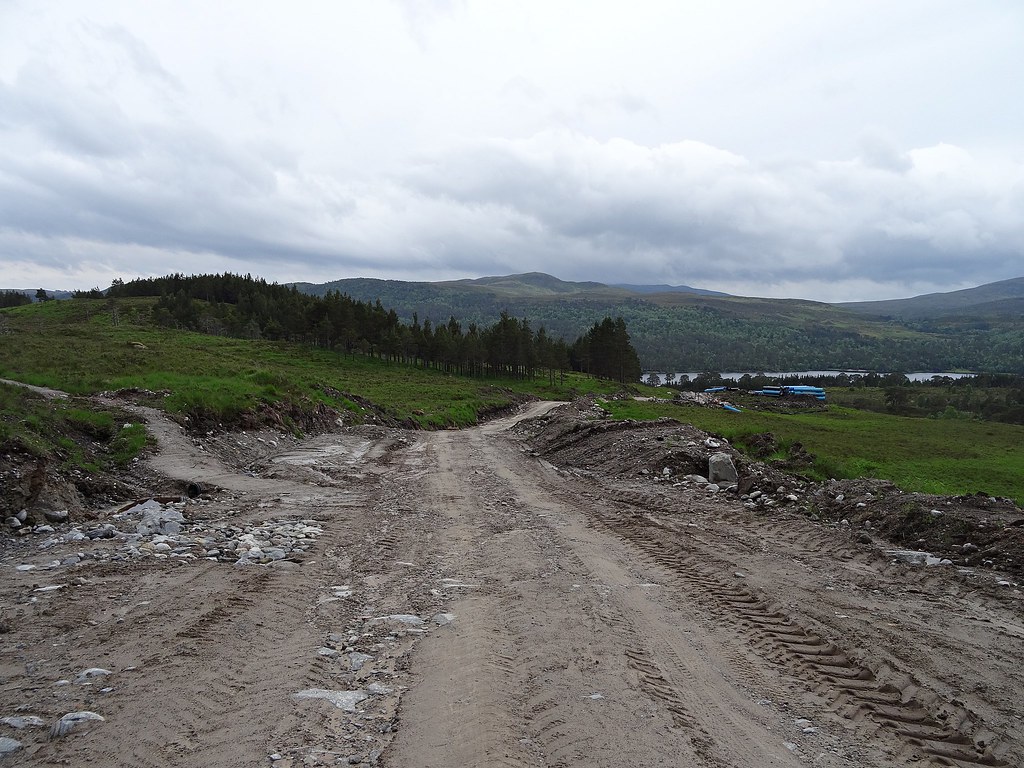 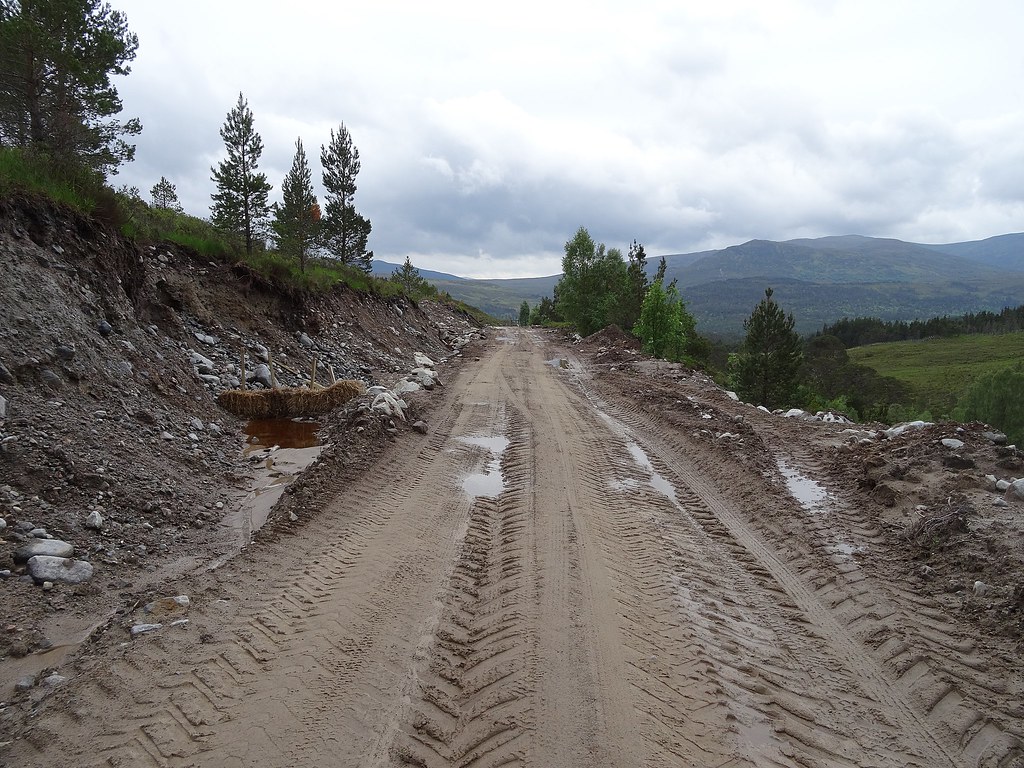 Better view from it. 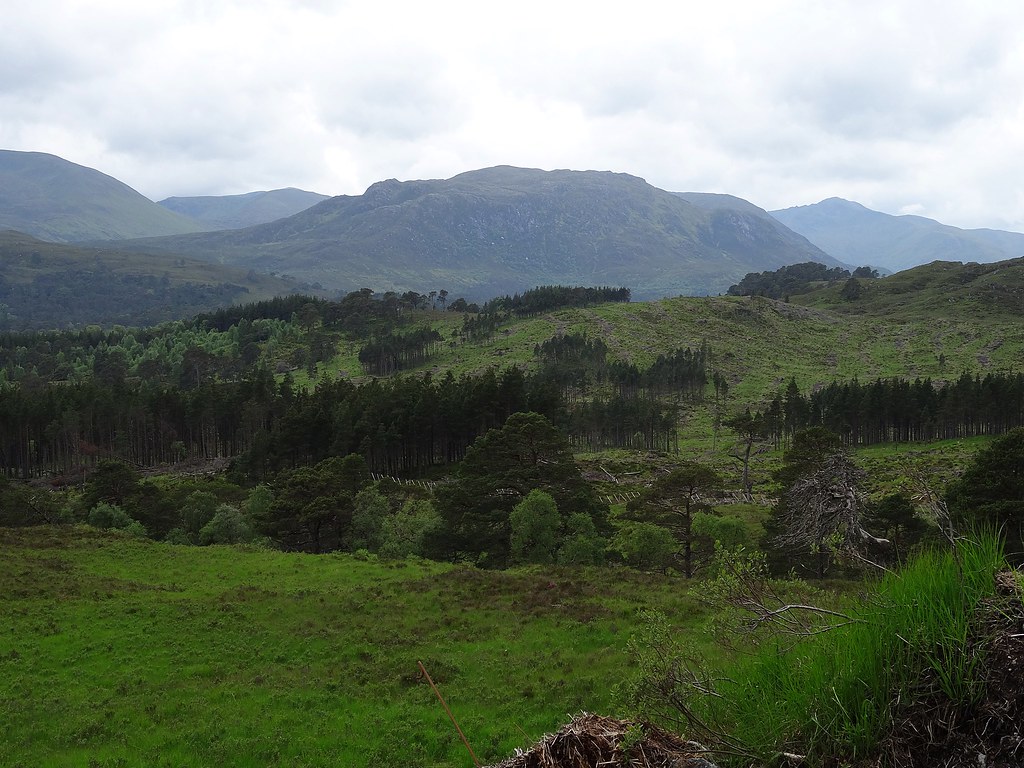 We carried on, at the end of this section there's a small dam being built at about NH196259, I guess this is to concentrate a larger volume of water down the pipe rather than hold water back, in the future, when the vegetation recovers, I don't think it'll look too bad.

Beyond this the walk becomes its original state, a bit boggy and the further you go the sense of remoteness returns.

There's a small cairn marking the start of the path leading up alongside the Allt Toll Easa, this is where we started the climb, we found this little fella enjoying the day. 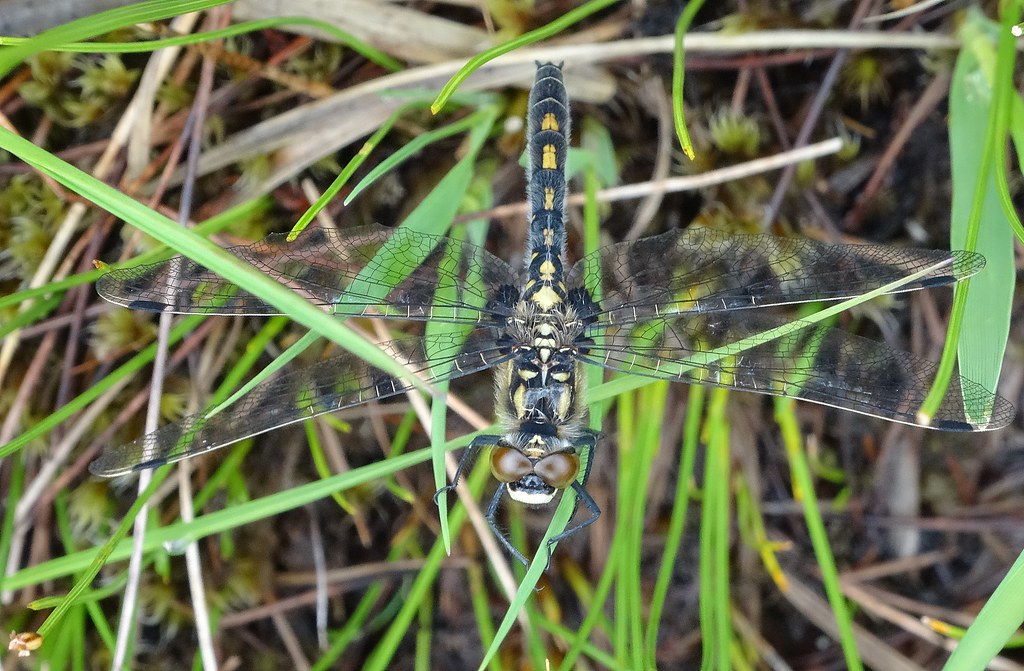 As this levels off the path that goes up Creag na h Inghinn is clear on the left, we went up this, 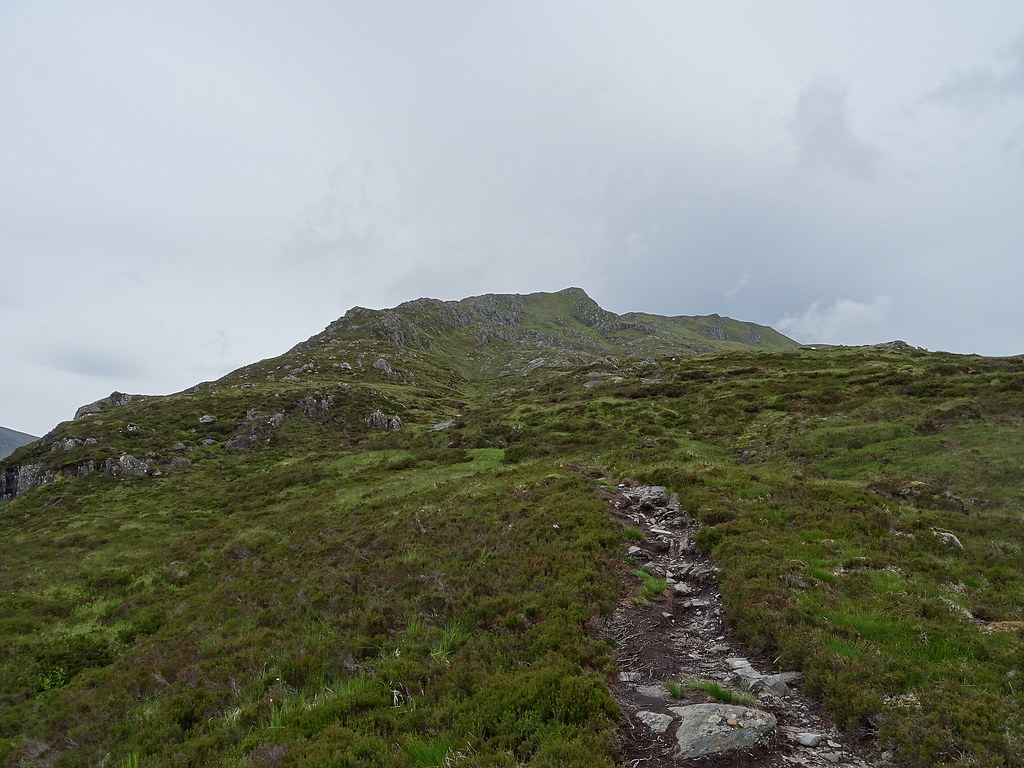 By now the wind was picking up a bit but not as strong as we'd feared, the clouds were above the summits, we could see most of what was around us so it was looking like a good day out.

Higher up the path. 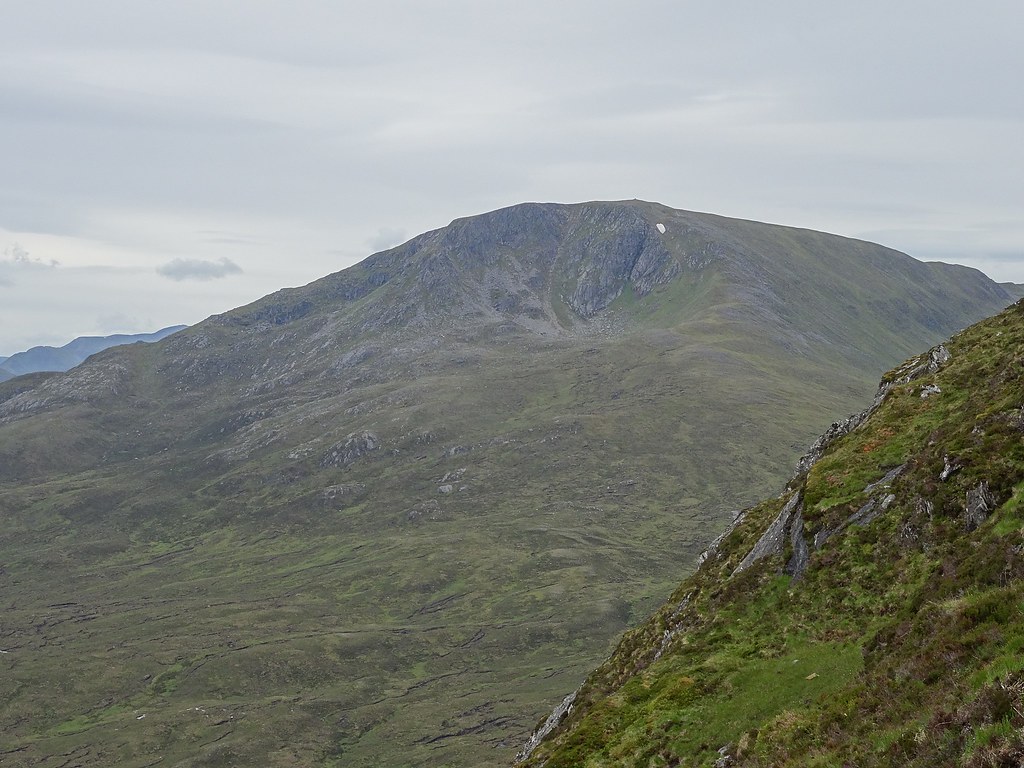 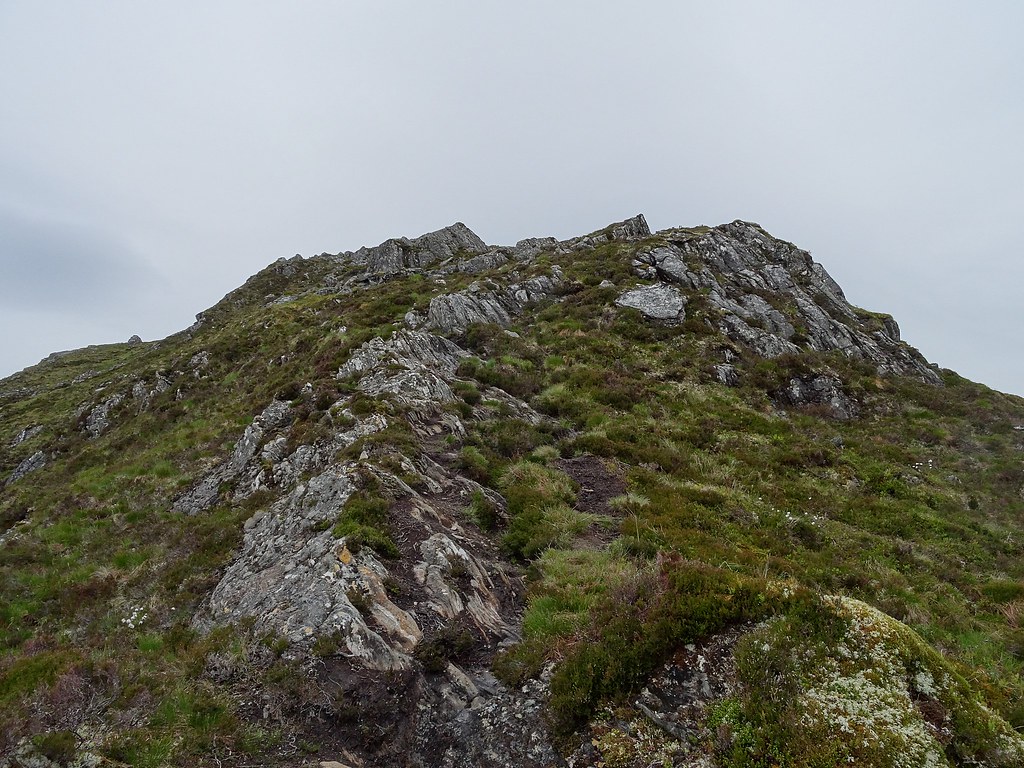 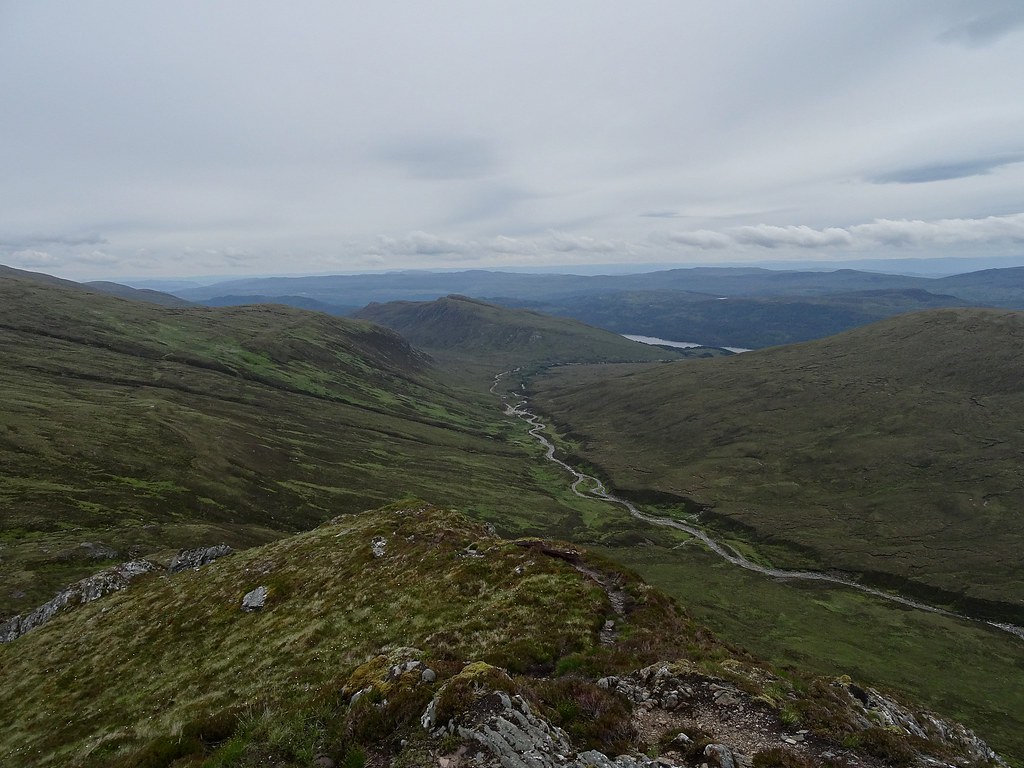 Along the ridge the views got better and better, there were still some small patches of snow here and there. 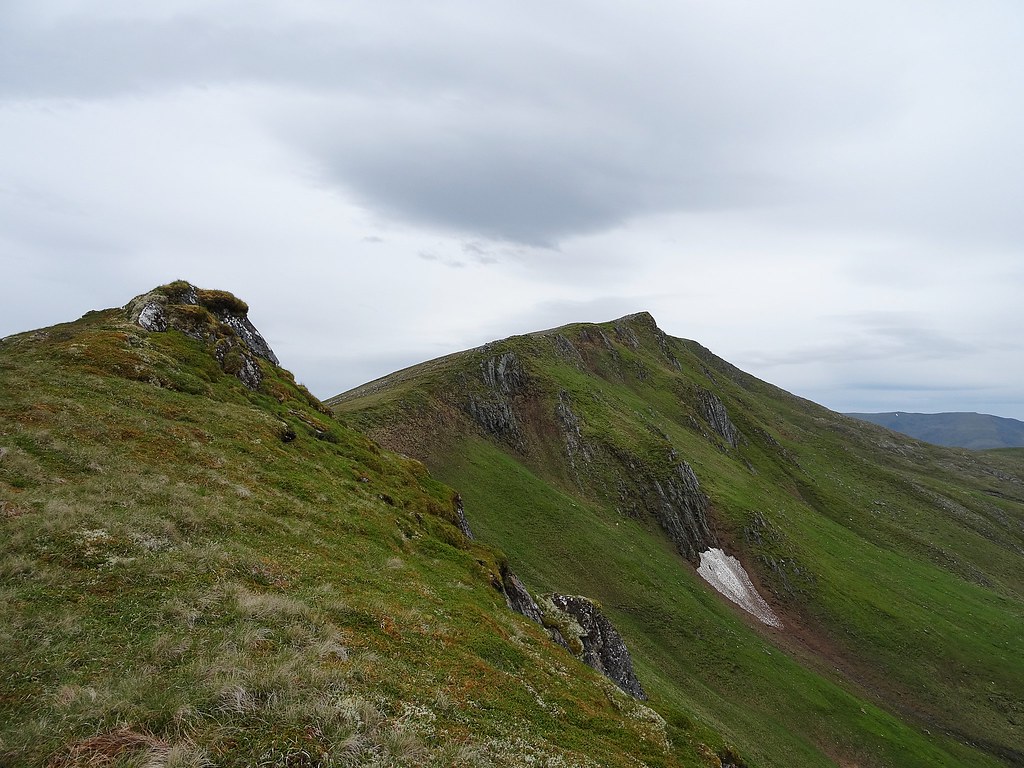 The dominating views were Carn Eige and her satellites, big, steep sided mountains we've just got to explore. 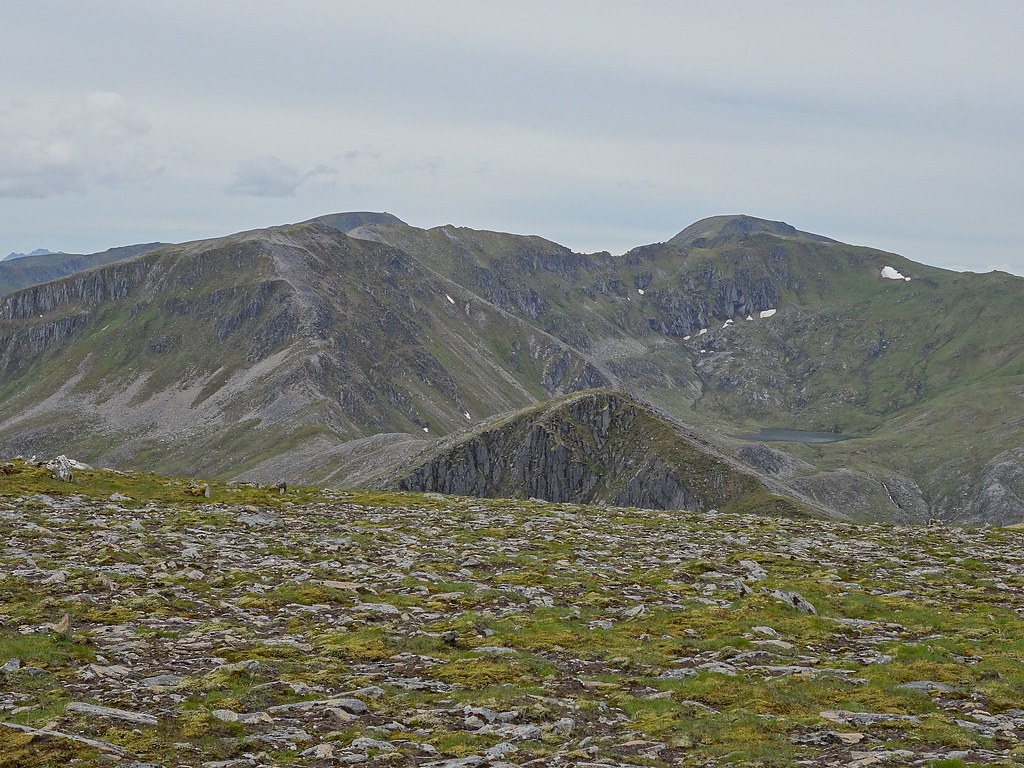 On the summit of Tom a' Choinnich the views are as good as we'd hoped for, there are mountains in all directions, too many to list ( I'm not very good at naming mountains from afar anyway). 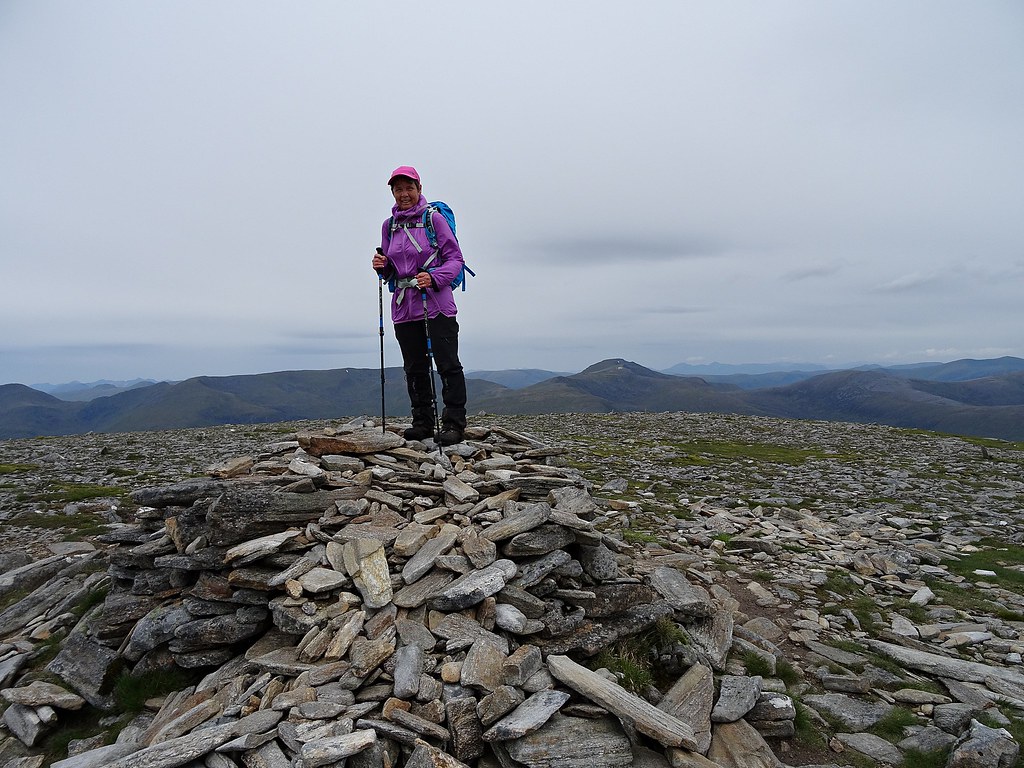 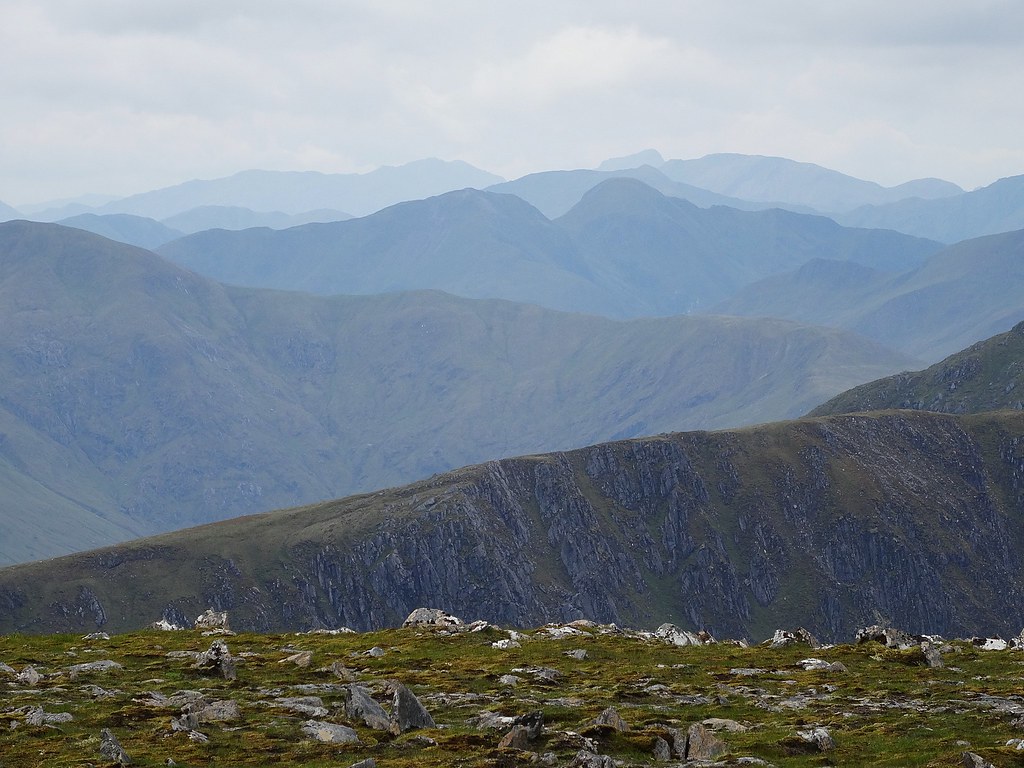 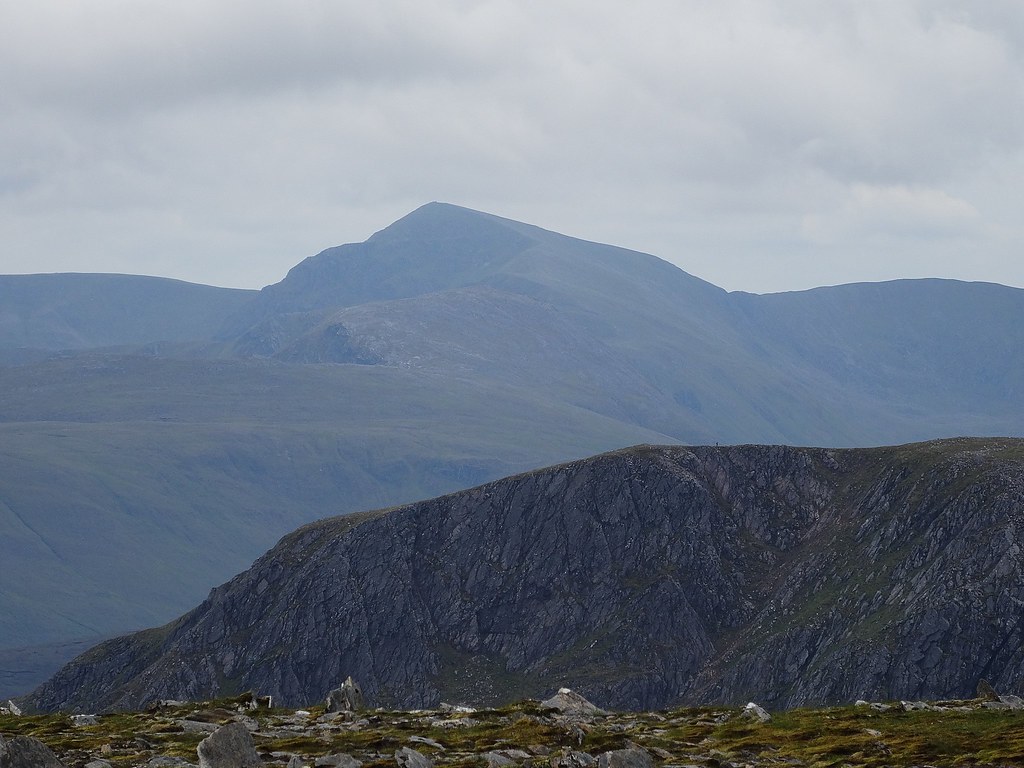 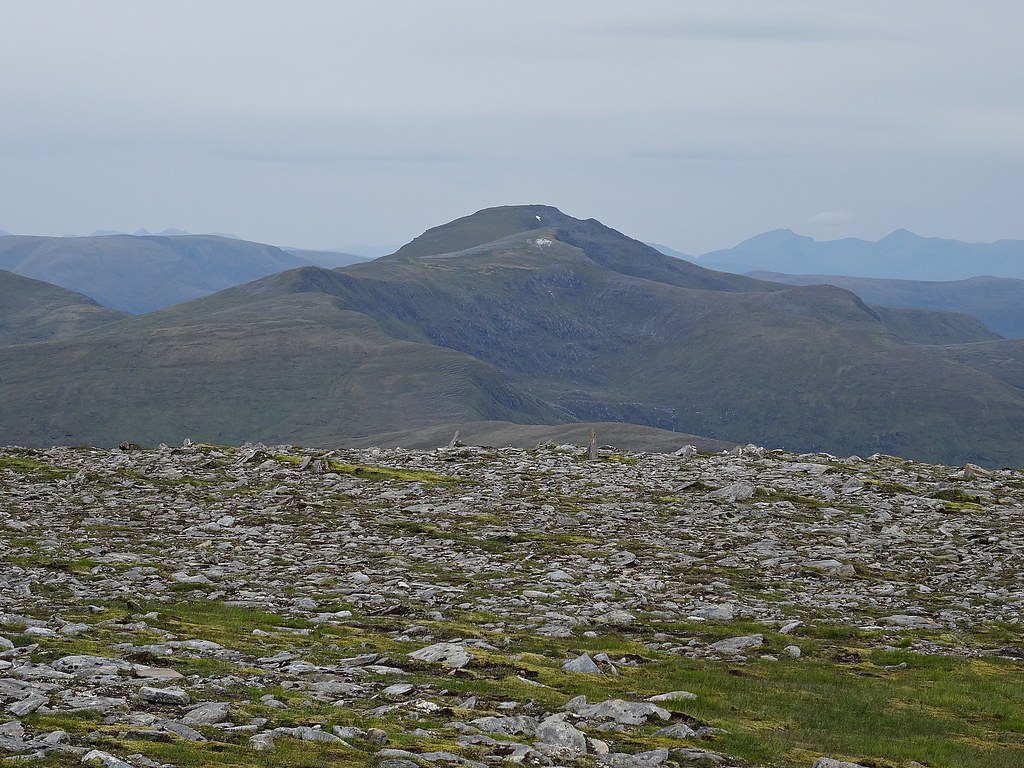 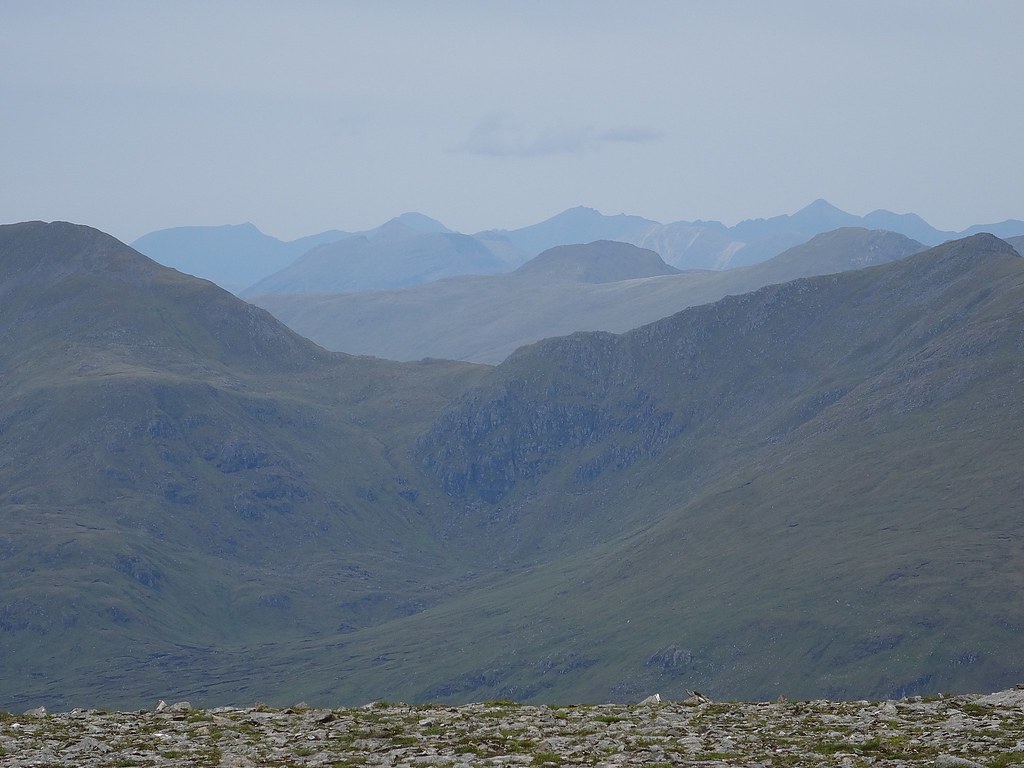 From the summit we headed for Bealach Toll Easa an old fence post marking the start of the path down.
The wind was very strong here, strong enough to unbalance us so we took our time.

Looking back to Tom a' Choinich from just above the bealach. 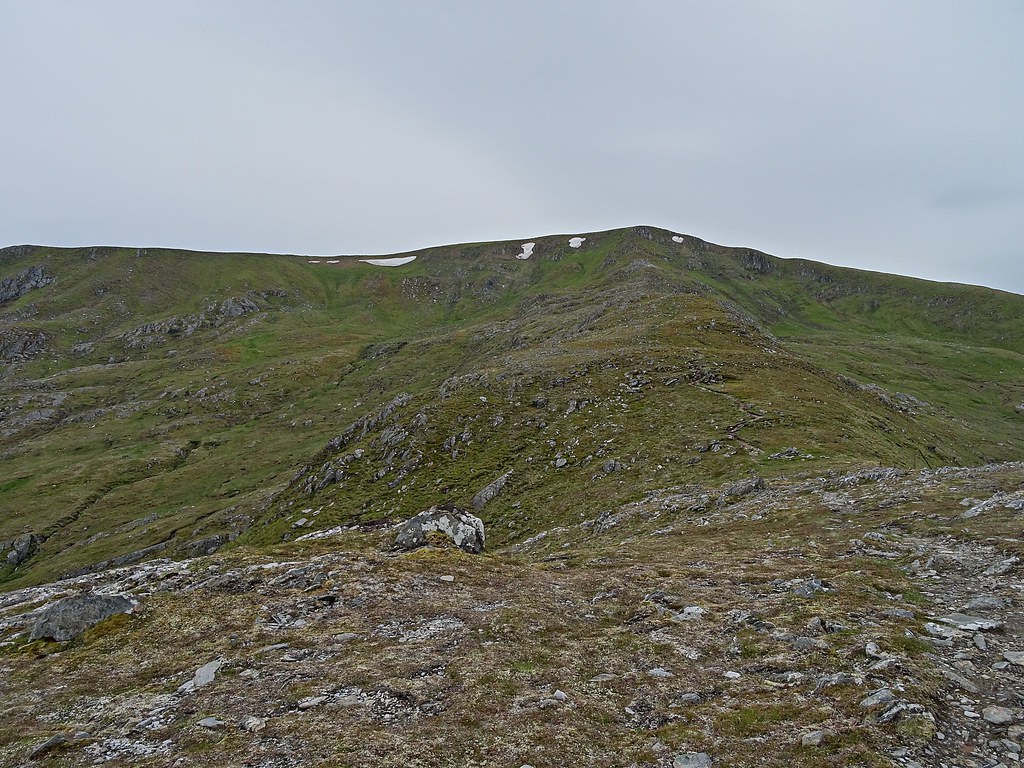 Once in the bealach the route ahead changes in character, the slopes become gentle, the way ahead reminding us of the Cairngorms, the path becomes a bit hit and miss in parts due to it going over scree but it follows a line of old fence posts, its a case of heading up eventually arriving at the large summit cairn that marks the top of Toll Creagach.

This first cairn is the summit, 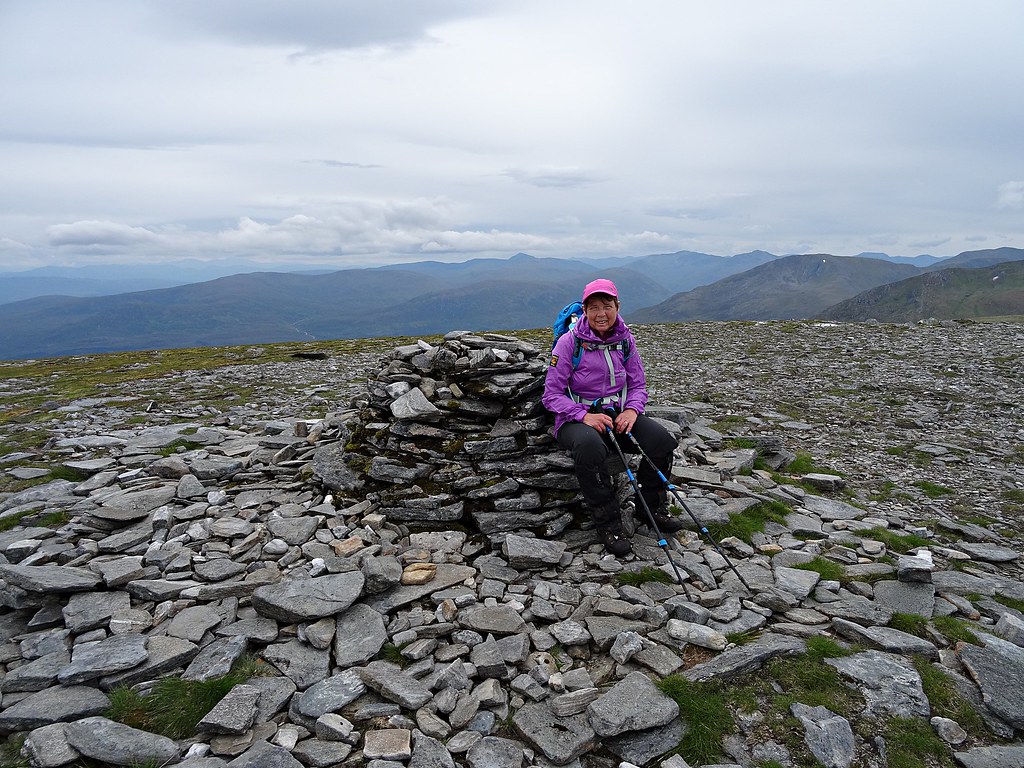 The trig pillar, a bit further on, is slightly lower. 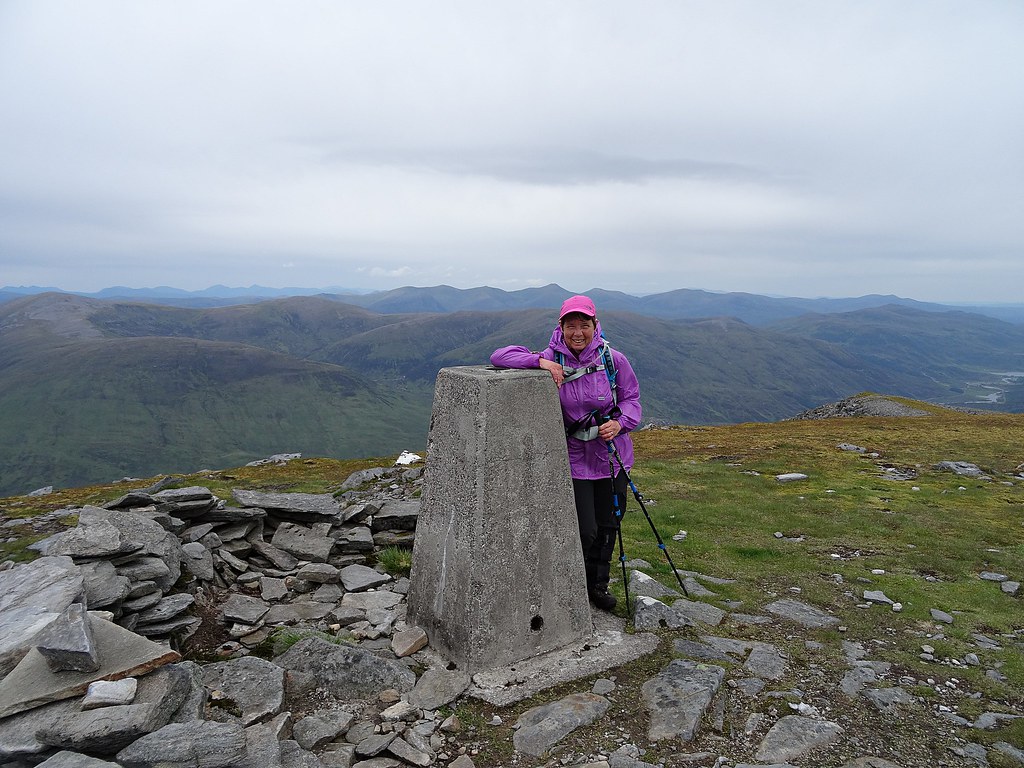 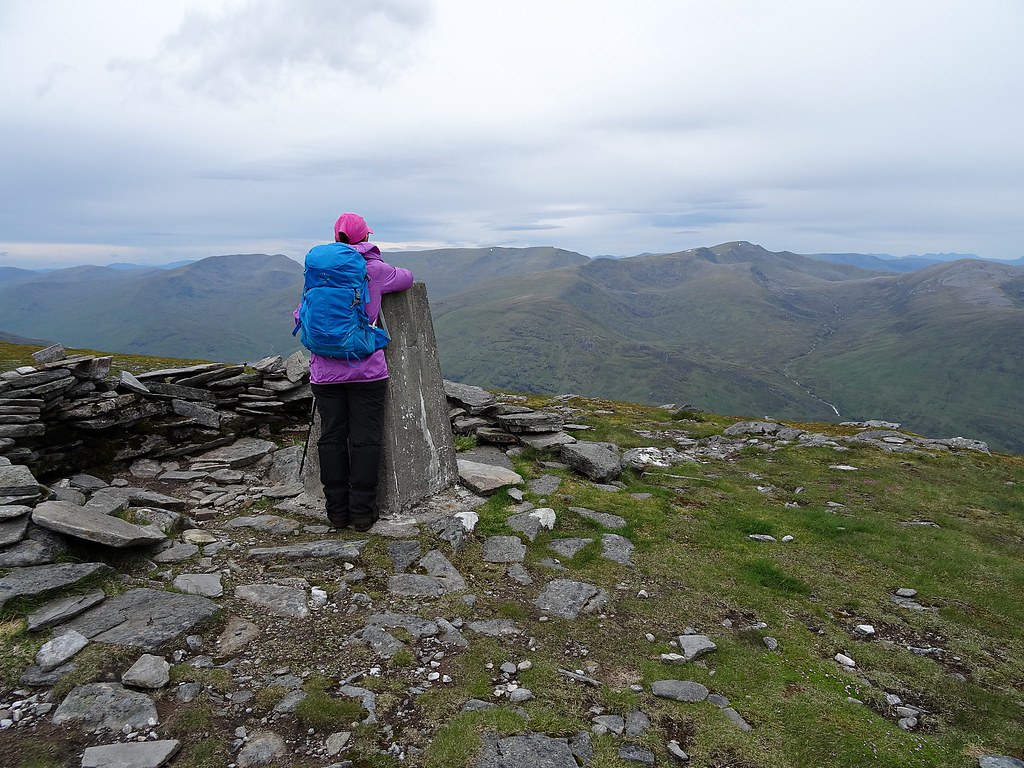 We visited both and had lunch by the trig because the view to the Mullardoch and Strathfarrar munros is excellent and we found a bit of shelter from the wind too.

Pano from the summit.

There's no path at all from the summit so heading directly south is the thing to do that works best, it's easy going at first, lower down it becomes tussocky so we were careful not to end up in a hole or a boggy bit. 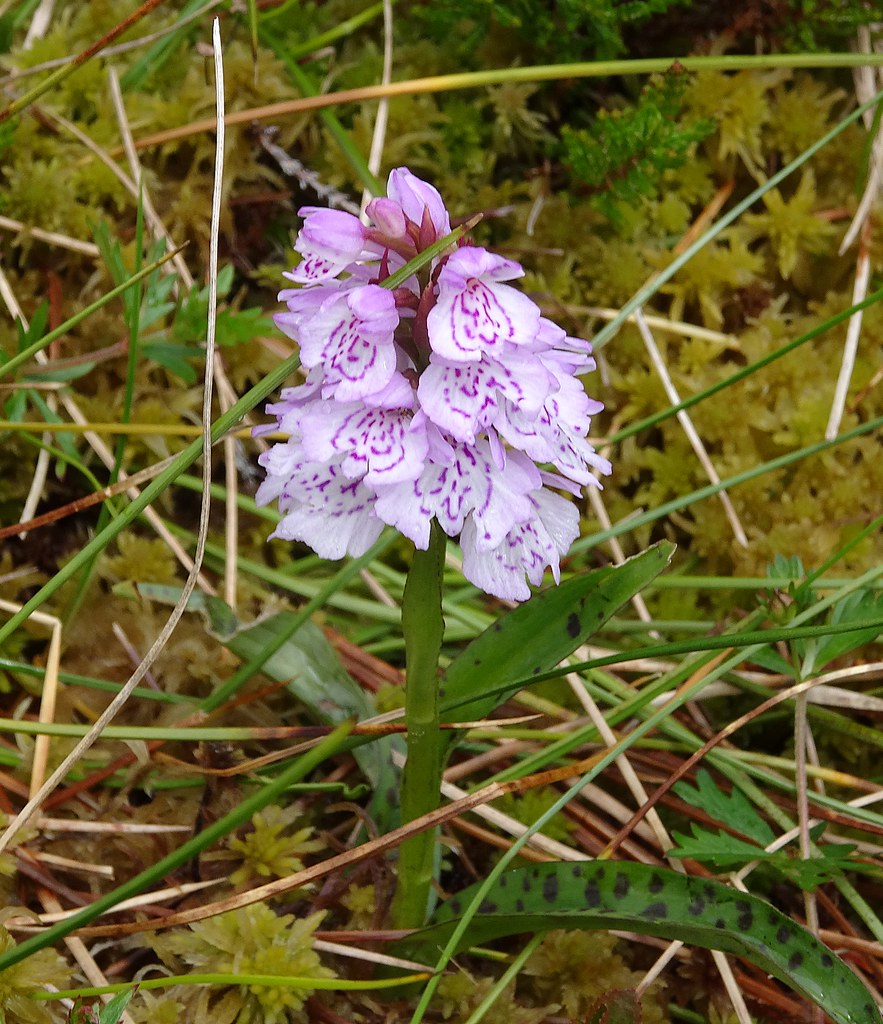 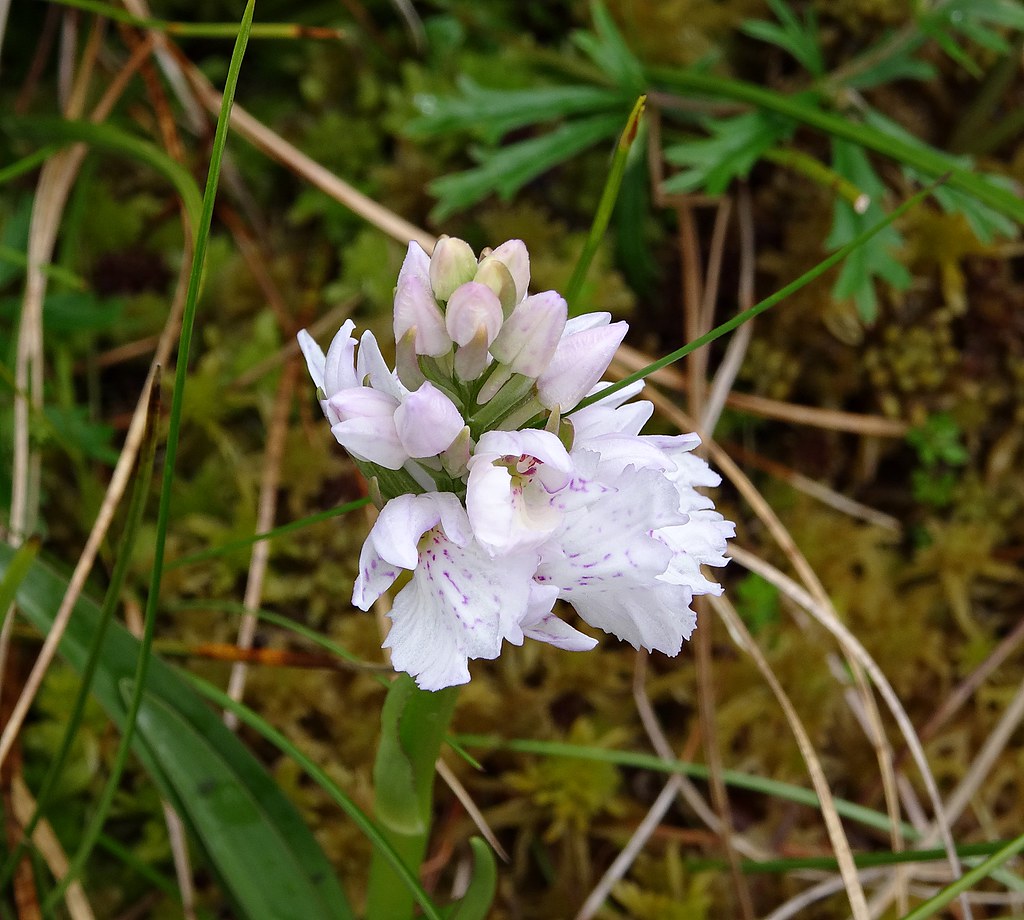 As soon as we could see the bulldozed track below us we saw the little dam and headed towards it. Just by the little burn marked on the map and about a 100 mtrs above the path we saw our first ever Adder sunning itself, well, it was until we disturbed it, I couldn't get the camera out quick enough to take a piccy, by the time I'd freed the camera from its case the Adder had disappeared into a hole not to be seen by us again, it was a male and probably about 18 inches long, that made our day.

Views from the adder spot, at least this lot doesn't move. 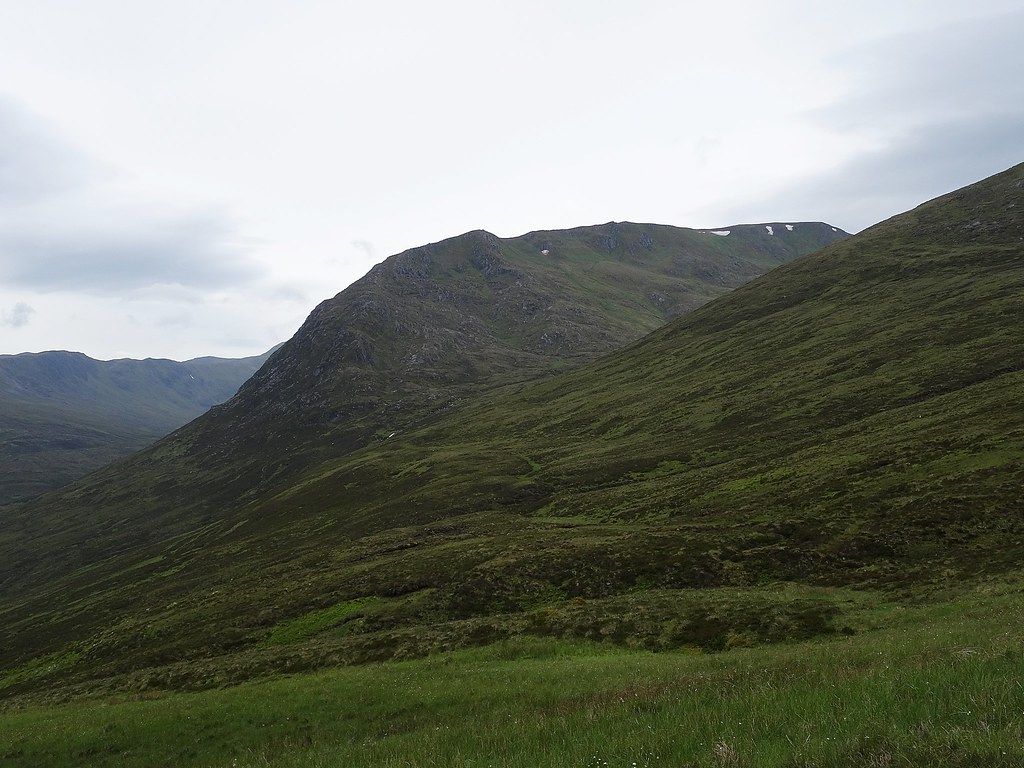 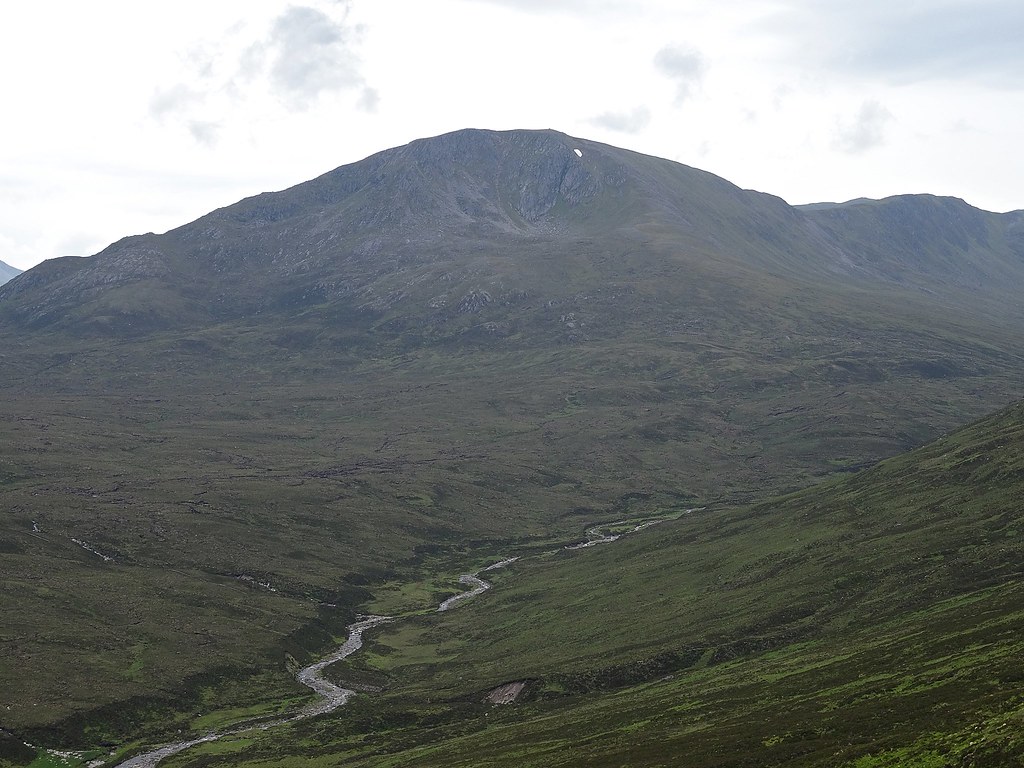 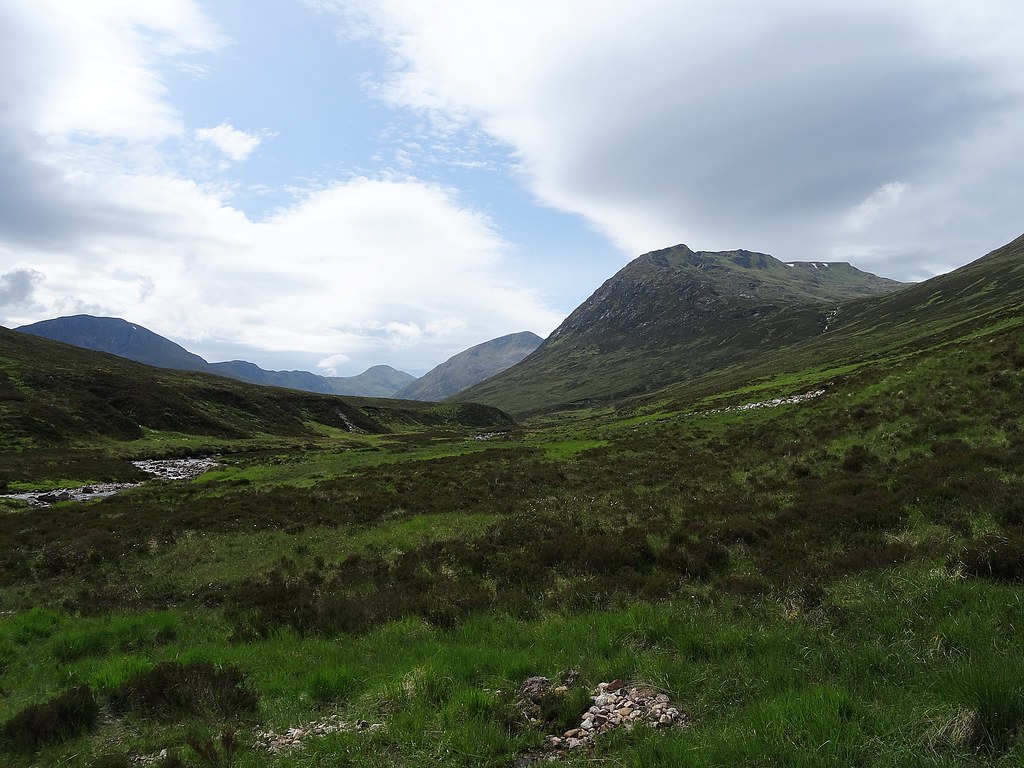 Back on the track the diggers were out, one was digging the trench for the pipe to go in, the other was filling it in once the pipe was laid, it was noisy but when the guys saw us they stopped their machines and waved us through which we thought was decent of them, they could have ignored us and carried on, they were friendly and were willing to have a chat and find out how our day had been. 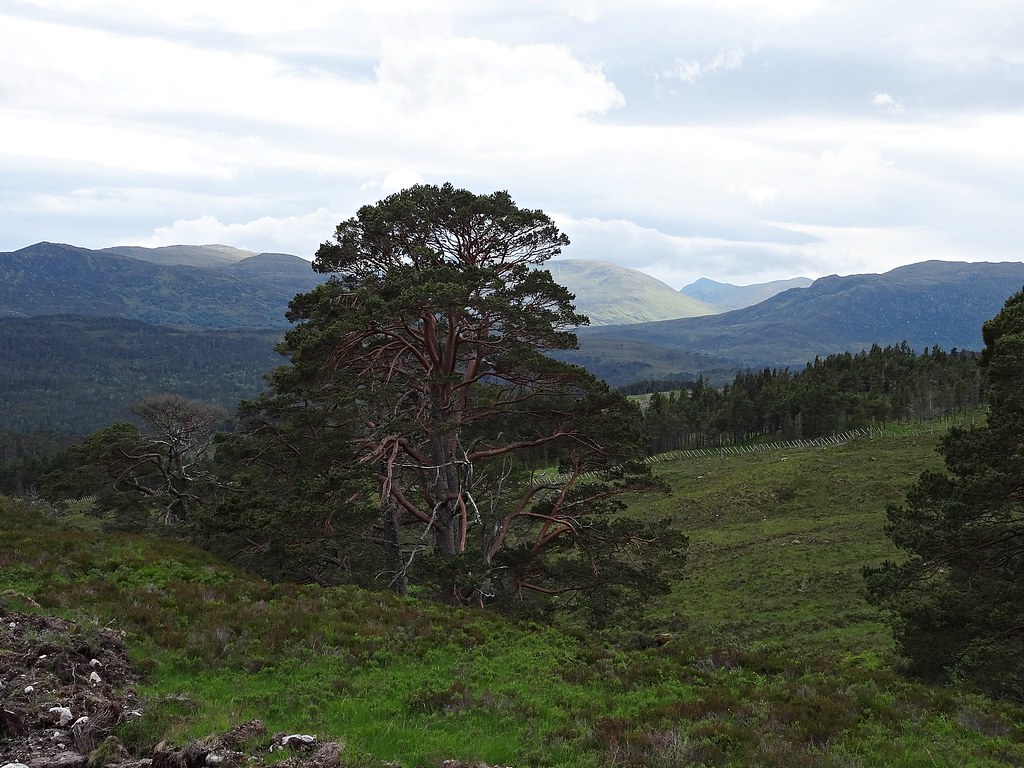 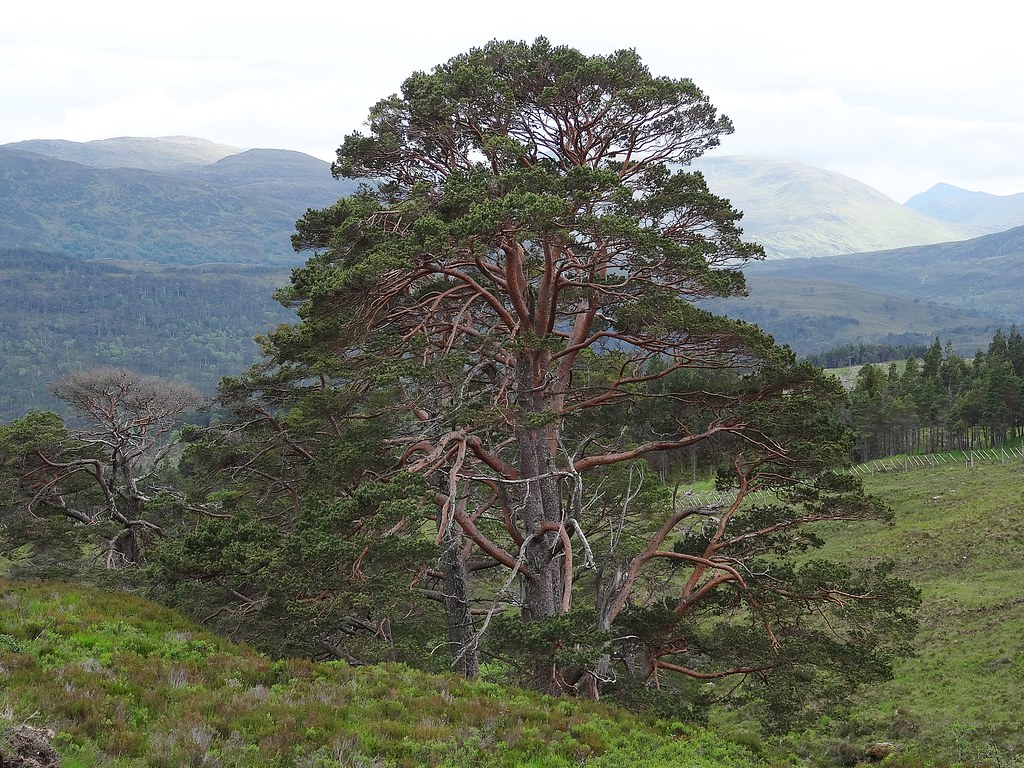 The trudge down the path was soon over with, when we arrived at Chisholme Bridge we went down to the burn and rinsed our boots and gaiters to get the mud off them.

Back at the car we de-booted put the gear in the car and then sat down for a while on a big boulder, there was a brisk breeze to keep the midges at bay, the sun was out and it was warm, a good end to a very enjoyable day out in Glen Affric, we're already making plans for a return next year, still loads of mountains to visit.

Re: An enjoyable twosome, lets hope the track recovers soon.

Hi Martin, the track looks marginally better than when I was up there a few months ago. Time will tell I guess.

Re: An enjoyable twosome, lets hope the track recovers soon.

So sad to see the mess from the hydro scheme. I love these hills, and hate seeing the destruction.