Forecast finally looked good after a week of fairly ominous predictions, so we picked Glenshee as it looked like we'd stand a decent chance of decent weather.
The original plan was for two summits - Glas Maol and Creag Leacach, two which our climbing partner for the day hadn't done before. However reading WH and other route guides, it seemed a shame to get up there and not pick up another couple, so we opted for Carn an Tuirc and Cairn of Claise as well.
One car was left at the main Glenshee centre car park and the second was parked about 1km further down the pass in a lay by on the left hand side of the road, the slightly closer to the ski centre on the right handside being full by 10am.
We went back up the A93 a few hundred yards and dropped down via the layby car park and went over the older stone bridge, which is to the left hand side of the newer bridge.
You get a clear view of the ascent up Carn an Tuirc from the word go. We could see the path winding it's way virtually directly up to the domed summit, with scree/boulders on upper reaches.
There's a really straightforward path up the left hand side of the stream and it makes for a pleasant route in to the start of the climb.
It's a steady climb initially up grassy slopes, then up through some scree and boulders. Before you know it, the summit's in sight. By the time we got up the clear view we had from the roadside had been shrouded in cloud which had rolled in down the glen and over all the summits. We'd acheived the summit in around 2 hours and grabbed some food in the cairn. It proved to be quite chilly when we stopped moving, so we got going for Cairn of Claise.
Visibility was poor and the guides say the terrain up on the plateau between Tuirc and Claise is really featureless. Not a good omen.
After a bit of uncertainty over which way to exit the Tuirc summit, we picked up a faint path heading SSE although we were probably lower than we should have been. The main path off to our left was soon picked up and the cloud although still hanging about, seemed to be shifting.
We crossed to Cairn of Claise in about 40 minutes - this would be really straightforward in good visibility. The path meets the end of a drystane wall and we followed it to the giant rubbly cairn, as per the WH directions.
Moving off from CoC the cloud really started to lift at this point, so we could see our route ahead. Off the summit cairn, skirt round a small lochan and follow the track which winds its way up onto Glas Maol. The ski lifts are on the right hand side but the path pulls you away from that and higher up towards the summit. You break away from the path up the grassy slope - we did it just by the remnants of a small cairn.
We saw a few mountain hares on the skyline of the hill over to our left as we approached the summit, which soon comes into view. This was probably the busiest summit of the day, with walkers seemingly arriving and departing from all directions. The top of Glas Maol is a big flat plateau so there's not much to see from the highest of the 4 on today's list.
What is clearly visible though is the route to Creag Leacach, the lowest of the group of 4 today but the most eye-catching - a rocky looking peak with a defined path you can see from the Glas Maol cairn.
It's a gentle drop down over grassy slopes to pick up the path which runs beside a stone wall. The summit looks more challenging than it actually turned out to be. The path winds through the rocks mostly (apart from a bit of a stretch over some boulders just off the shoulder of the hill). From lower down and beneath the summit approach, the final stretch looks more severe than it turns out to be - there's an ascent, short descent then a final pull to a cairn perched across the stone dyke. The view back down to the ski centre is lovely even on an overcast and mostly dull day like the one we ended up having.
The route off takes you skirting round the edge of Glas Maol on a faint track, using the ski lift on Meall Odhar as a point to aim for. It feels like hard work especially as the track disappears in places only to reappear as suddenly.
A heavy rain shower moved up the glen towards us and we quickened our pace making it back to the car at the ski centre at 6.30pm having set off at 10.30am.
A satisfying day on the hills in itself, even more so as it doubled my Munros from 4 to 8 and our climbing partner claiming 77 and 78. 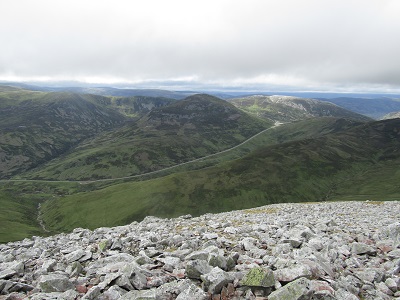 Mountain hare and his pal