g15.gpx Open full screen  NB: Walkhighlands is not responsible for the accuracy of gpx files in users posts
My son Chaz, me and Gary.

Gary, our winter skills instructor of the previous 2 days, had a day spare and asked if we’d like to team up and take a look at Glencoe. We reluctantly agreed!

Just an hour away from our base at Killin, the scenery on the drive was superb in the clearing weather, all those Munros, Rannoch Moor and our first sight of the Buachailles. The drive down the Glen was tremendous, hemmed in by Aonach Eagach and the Three Sisters. We parked at the car park opposite the entrance to Coire nan Lochan, I got out of the car and just stood there speechless and awed at the views all around, the jaw-dropping grandeur and majesty of the place. Absolutely fan bl****ng fantastic!

the Three Sisters, 3 photos joined together! the way up, Coire nan Lochan

Gear on, we headed straight down to the River Coe and crossed at the footbridge. An excellent path climbs steadily up the Coire to the left of the stream, giving increasingly marvellous views of the Glen behind the higher you get. The sun lit up the Glen and showed the superb colours of the Aonach.

As you climb higher the Coire narrows and the path gets nearer to the stream and its waterfalls, delightful. Despite the stops to take in the view and to get photos it took us only just over an hour to get to the snowline where we stopped for a second breakfast. What a place to sit it was, just stunning. Ice axes out now, we carried on up to a plateau that opened out below the cliffs of Stob Coire nan Lochan, more great sights. We were now getting into the cloud, it started to snow and felt like proper winter again but the snow was still fairly soft here at about 800m. Stob Coire nan Lochan, cliffs & snowing, our route to the summit was to the left of the buttress

Gary’s plan had been to gain the ridge by way of Broad Gully but there were 2 groups of folk already there, so we headed east to quieter slopes. We found some good terrain above the lochans and steadily climbed, the slope getting steeper and the snow firmer as we progressed. And the view was still there all the way down to the Glen and car park, it is almost 1km of altitude and 3km distance that you’re looking at, just great! nearing the ridge top, nice snow work and views back to Glen Coe

Soon we got onto the ridge and headed west for a short way, taking in a bit of light scrambling as we headed to the summit of Stob Coire nan Lochan. We had some food and drink at the summit, willing the cloud to lift and to give us a view of Bidean nam Bian and it did, just as the mwis weather forecast had predicted! We began to see the cliffs faintly, then with more and more detail until the summit and ridge were clear. It’s just under 1km to the Bidean from here, we headed down to the bealach and whilst there took advantage of the clear weather to plan our way down for later. As we started the climb to the summit the ridge narrowed, got steeper and required some care in the snow. We passed a chap who was descending, he had chain-type crampons that weren’t the job for this terrain and further up we passed his partner who was similarly equipped – nice of him to leave her to it to struggle down the slope! We reached the summit with glorious clear views, although it was still cloudy they had lifted above most of the tops and we could see al least 60km in all directions. from Bidean, looking over the Stob with the Aonach and a shy Ben on the left 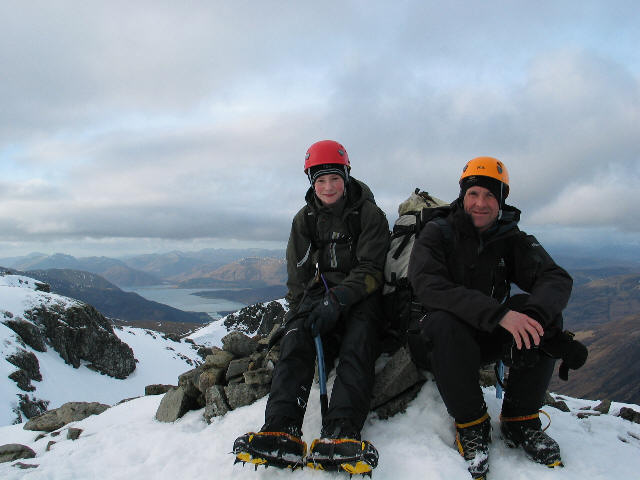 to the west, Chaz and Gary at the summit of Bidean

We carefully climbed back down to the bealach where Gary demonstrated abseiling off a snow bollard. We descended from the bealach directly into Coire Gabhail and found as much snow as we could to join the path that runs to the left of the stream. descending from Bidean to the bealach, we then turned right from the bealach, into Coire Gabhail

This is another wonderful walk and leads to the ‘lost valley’, a magic place. The stream goes underground at a large flat area, the path continues from the right corner. There is some steeper ground to come and the stream to cross, we didn’t get too wet but the feet did get a bit of a dip. We hurried on since it was getting dark and just made it back to the car before torches were needed. A short drive to the Clachaig Inn for a meal and a beer, just the job to round off another cracking day. The Glen is something special, I'll go again on my next visit to Scotland.

yokehead wrote:the scenery on the drive was superb in the clearing weather, all those Munros, Rannoch Moor and our first sight of the Buachailles. The drive down the Glen was tremendous, hemmed in by Aonach Eagach and the Three Sisters. We parked at the car park opposite the entrance to Coire nan Lochan, I got out of the car and just stood there speechless and awed at the views all around, the jaw-dropping grandeur and majesty of the place

You remind me of just how I felt the first time I came over Rannoch Moor into Glencoe, alot of years ago now

Wait until you see Torridon and the Cuillin too!