For my 5th, 6th & 7th Munros and the first I had undertaken on my own I decided to tackle the easily accessible Cairnwell Munros from the Glenshee Ski Centre a short drive from my sister in laws house in Blairgowrie . The weather forecast was good but with some strongish winds.

Following the steep unmistakeable track between the ski lifts from the car park within a little under 25 minutes after setting out I had reached the summit of Carn Aosda to be met by some sleet. The walk to Carn a Gheoidh was easy going up a gentle slope then across a flat plateau by which time the sun was out. 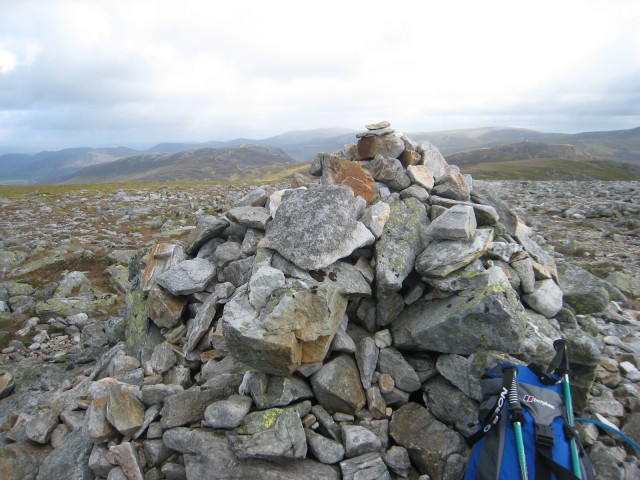 Summit of Carn a Gheoidh

Returning back along the same route to the Cairnwell-Aosda ridge and then up to the summit of The Cairnwell with all its ugly transmitter masts. Approach to the summit of The Cairnwell Just beyond the summit there was a superb view down Glen Shee before I headed back down to the car park, all in a little under 4 hours. View down Glen Shee from the The Cairnwell

I'm jealous of your weather, was there the day after & could not realy see a thing.