Fersit Five in a day

Fersit Five in a day

For our annual mid-summer trip Neil and I were hoping to finish off the munros around Loch Treig as well as a trio near to Fort William.

The week commencing the 19th of June saw most of the country basking in a mini heatwave, so I made a mental note to pack some sun cream (if only I knew!).

After work on Thursday we headed up north and stopped off at friends near the border to break the journey, then after a 5 am start we arrived at Fersit just after 10am.

The original plan was to complete a circuit around loch Treig over two days with a wild camp in between; however, as the weather now looked to be poor and worsening on Saturday we decided to go for the loop in the day.

So after ditching sleeping bag, stove etc we set off at 10.30 to complete a clockwise route (the idea being we would complete three peaks earlier in the day whilst still fresh).

I was quite apprehensive given my continued lack of fitness (I know I only have myself to blame) and the fact that Neil is cooking on gas, but he maintained a reasonable pace up to our first summit of the day - we arrived at Stob Coire Sgriodain at 12.15. We stopped for lunch and had resolved to keep eating regularly through the day to keep fuelled up. Feeling fresh after the first climb of the day

The trip to the second peak of the day was pretty straightforward and we were even able to ditch our packs for the last couple of hundred metres and arrived at Chno Dearg just 45 minutes later. 45 minutes after the first summit we reach number 2

We could see our next objective so didn't bother with a compass bearing and just contoured round the top of Meall Garbh to the low point above Creag Tharsuinn. The descent to the allt was steepish, but still feeling fairly good I scampered down and fatigued my quads a bit more than was necessary considering the climb to follow. We just headed straight up the steep grassy slopes of Creagan an t-Sealgair up to the broad ridge that we followed to our third munro of the day. A steep climb for number 3

The weather at the top had changed for the worse, so we didn't hang around and set off in a south westerly direction eventually aiming for a bridge beneath the train line. We stopped here for about 30 minutes to take our second meal break of the day (the other half of a sandwhich).

All too soon though we had to set off into a stiff breeze along the road towards the loch. The road eventually thins into a track that eventually reaches a fork near to the building at the loch head. Take the fork over the allt and behind the building before crossing the allt heading into Lairig Leachach. We followed a feint path north west before striking off north easterly up steep grassy slopes. By now the fatigue had really set in and I plodded at a painfully slow pace. After what seemed like an age I met up with Neil who was sitting to wait for me - then he broke the bad news that there was still 2km and 400 metres of ascent to the summit. Well there was no going back so I pressed on, occasionally benefiting from a following wind, until the final climb to Stob Coire Easain came into view. I reached the top and flopped to the ground feeling appallingly tired. Appallingly tired after the climb for number 4

They say every cloud has it's silver lining and whilst we sat at the summit the clouds parted showing our next objective, which didn't seem too far away. So we set off hoping for some views to reward our efforts. However, by the time we got to Stob a'Choire Mheadhoin the weather had closed in again. That didn't dampen my spirits too much though as I knew that was the climbing over with for the day. 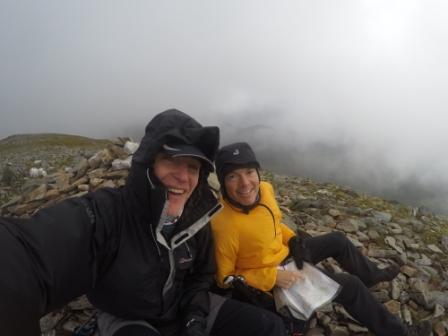 The descent was quite long on tired legs and at one point becomes very steep through crags that I wouldn't like to have tackled in the dark; however, we had the long days of mid summer on our side and despite the dark clouds. Eventually we reached the car eleven hours after we started. We had stopped for maybe an hour along the route and the last few hours had been a lot slower than the first few.

Our plans for the next day were scuppered by high winds so we headed back down to north Wales with just the five munros for this trip.

You didn't mention that you did the loop in just yer trainers! A good days effort though just a shame the next day was so poor.

I've had my eye on a variation of this for a while, but I'm planning to wait for fair weather

I don't know about being unfit - that's a pretty speedy round I would say!!!

Fantastic - would like to bag these 5 following your route 😊