With sincere apologies to Carly Simon for the WR title (yes, I know, they don't get any better

...)
This walk was a bit of a Cunning Plan hatched up by Tom and myself

... We were both keen to do Beinn Mheadhoin, having had a good look at it on a recent outing to Ben Macdui, and initially we planned to do what most folk probably do and cycle in to Derry Lodge from the Linn of Dee. However, there would be three of us on this outing, as our young pal Harris (raised in Germany but about to start a course at Dundee University) was hoping to join us, and the logistics of taking three people plus three bikes in one car just sounded a bit too tricky. We therefore opted for the somewhat more arduous but more scenic northern approach to Beinn Mheadhoin via Loch Avon and the Shelter Stone Crags. We were also hoping that, as an added bonus, we might just be able to bag Cairn Gorm on the way back if we still had the energy, since strangely enough none of us had done it before...

our_route.gpx Open full screen  NB: Walkhighlands is not responsible for the accuracy of gpx files in users posts
We got an early start and set off from the Coire Cas ski car park around 9 a.m. The most direct route to the west end of Loch Avon (which has to be passed if doing Beinn Mheadhoin from the north) goes up the 'Goat Path' on the headwall of Coire an t-Sneachda, so that was what we did.
There were excellent paths for the start of the route, but as we entered Coire an t-Sneachda itself, the terrain was starting to look a bit intimidating 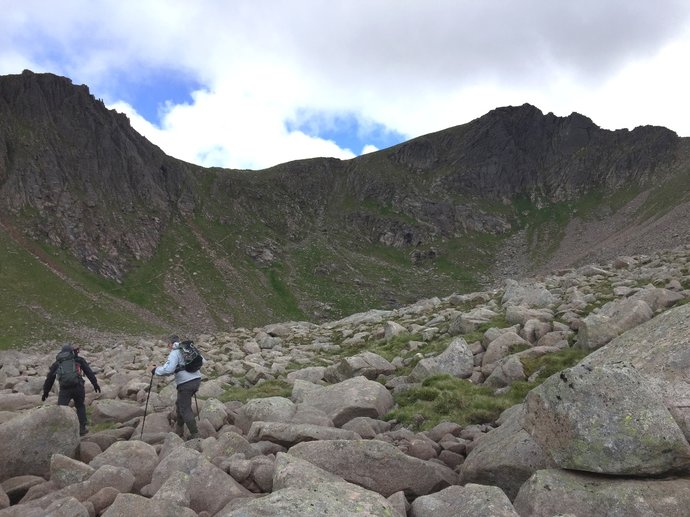 After a bit of boulder-hopping across the corrie floor, however, we found the foot of the Goat Path, which although relatively steep with some mild scrambly bits, proved to be quite a bit easier than we had initially feared (well, than I had initially feared anyway). As recompense for the physical effort involved, a good view opened up towards Cairn Gorm summit to the east. 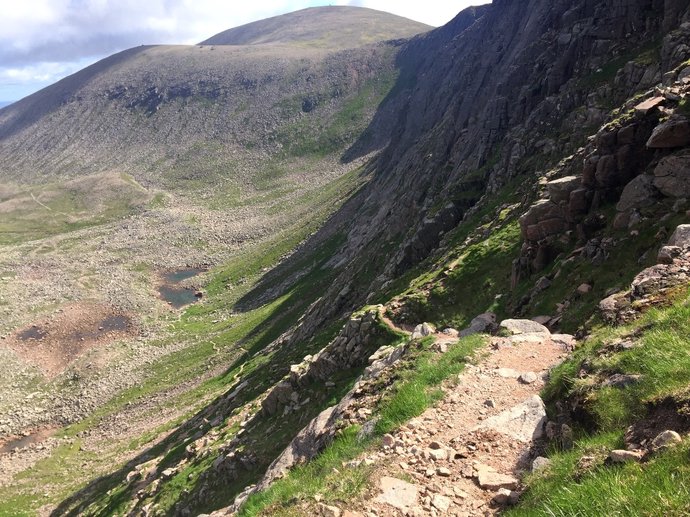 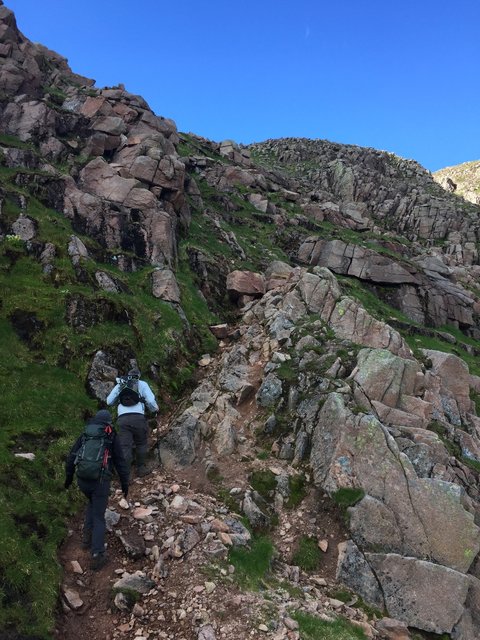 The mwis forecast was for mainly dry weather with a good chance of some summit views, but extremely breezy on the summit plateau, and that was exactly what we got. However, we did get some shelter from Cairn Gorm itself for the first short crossing of the Central Cairngorms plateau, from the top of the Goat Path down into Coire Domhain, where we picked up another good path descending towards the western end of Loch Avon on the left-hand side of the stream (which must presumably be called the Allt Coire Domhain). From here, we got our first proper look at Beinn Mheadhoin itself, looking like a huge spiny-backed reptile with all its summit tors, and also our first proper look at the famous Shelter Stone Crags 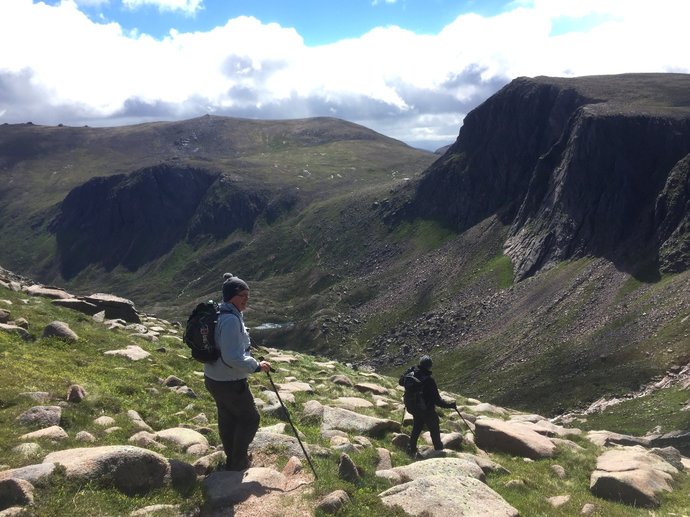 The descent to Loch Avon was a delight, with the views just getting better and better. A pano shot of the Loch and Crags with Beinn Mheadhoin on the left: 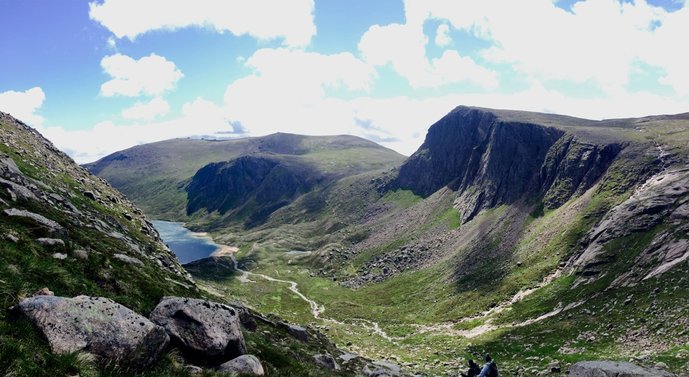 ...And a better look at Beinn Mheadhoin from a bit lower down: 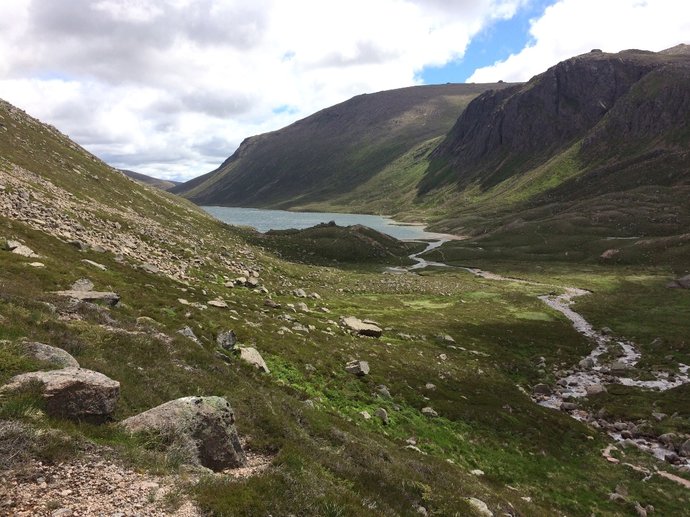 We boulder-hopped our way dryshod across the Feith Buidhe river at the bottom of the path, and took the continuing path directly below the Shelter Stone Crags, which were looking deeply impressive from this angle 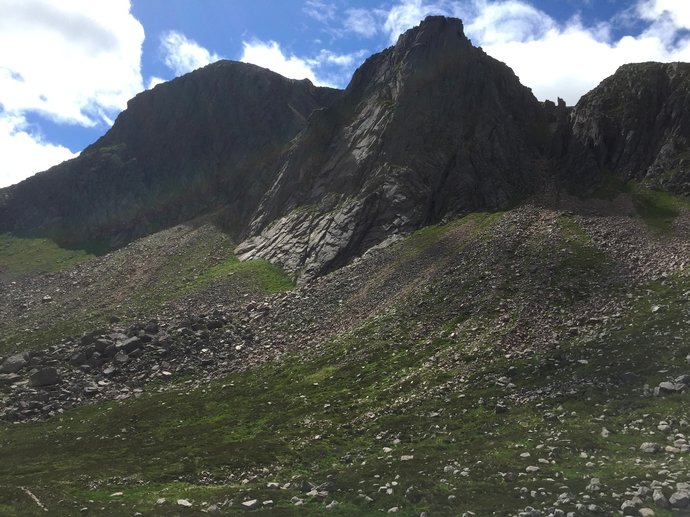 While we were passing anyway, we couldn't resist clambering up for a quick nosey at the famous Shelter Stone itself, where a huge flat fallen boulder has created a huge, hidden, remarkably room-like space that would provide pretty decent shelter for up to ten people I would think (providing they were fairly good friends 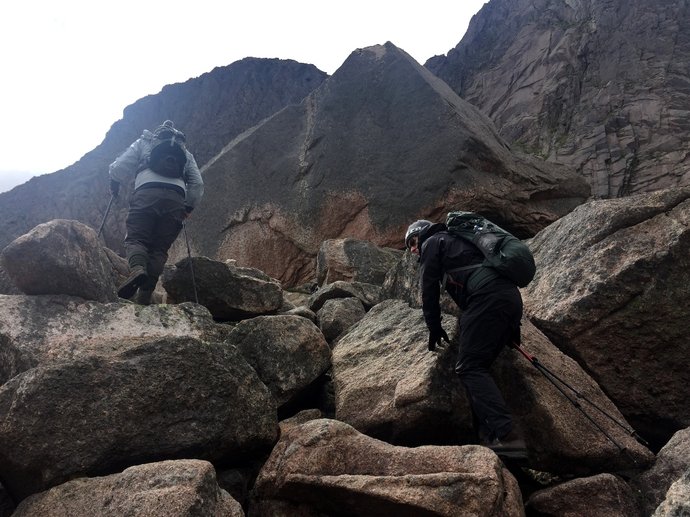 There was only one person in occupancy at the moment by the looks of it, with an inflatable mat and sleeping bag having been left, but the owner presumably off for the day climbing something. We went back down to the main path and started to head on up to the Central Cairngorms plateau again, aiming for the north of Loch Etchachan. Thankfully, there was a good path all the way up. On ascent, there was a fine vista back down towards Loch Avon and the steep southern flanks of Cairn Gorm: 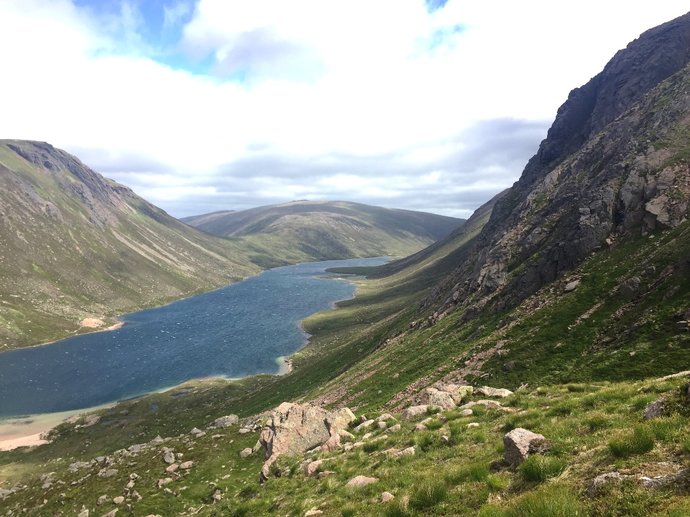 There ensued a pleasingly flat (although boggy) section of path, crossing the plateau to the spot just east of Little Loch Etchachan where a stony and intermittent path branched off left to make the ascent up Beinn Mheadhoin's rounded SW ridge. The first bit of ascent was a bit of a slog up moderately steep and bouldery slopes, but at least there was a good view west down over Loch Etchachan and Little Loch Etchachan for distraction

. Ben Macdui had its head in the Clag at this point: 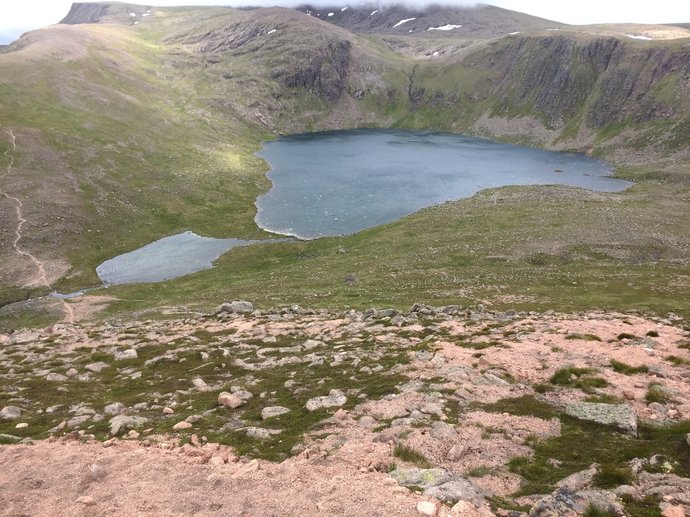 The gradient thankfully eased higher up, which was just as well since it was blowing a hooly by now

! We battled on through the wind (which was at least at our backs at this point) and before long, Beinn Mheadhoin's remarkable tor-strewn summit environs came into view. The tors are apparently known as 'The Barns of Beinn Mheadhoin', and are very similar to the 'Barns of Bynack' on that mountain, except that there are more of them! 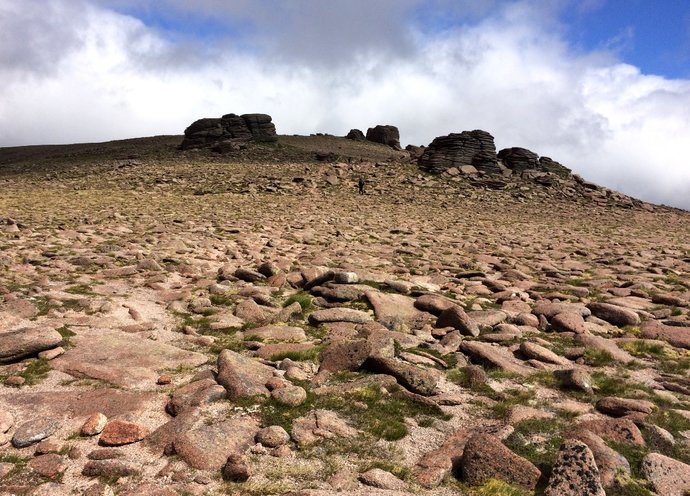 We paused to shelter for the wind for a couple of minutes in the lee of the first tor, then set off towards the summit tor itself, which was looking mildly intimidating on approach. At this point, rather surreally, we were passed by a hardy soul wearing red shorts, who hared up the summit tor, came back down and disappeared into the distance before we had time to blink

. We made somewhat slower work of it (especially me!) - we were getting blown about all over the place by now. 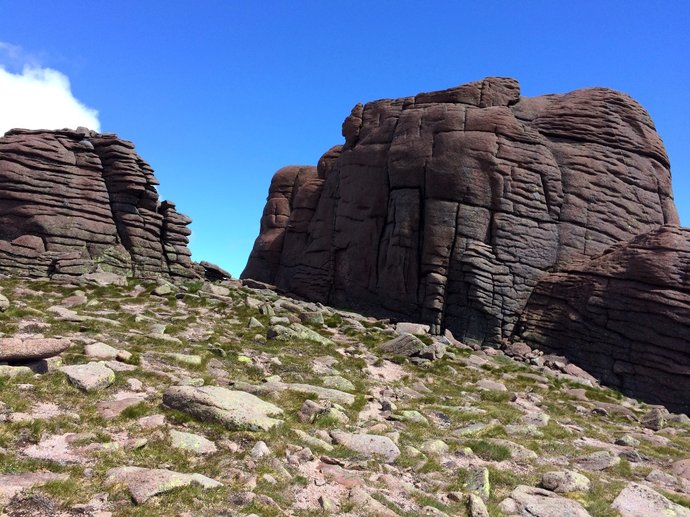 The summit tor looks impossible from the SW, but in fact there is a relatively easy scrambling route up the other side (which also had the advantage of being a bit more sheltered from the howling gale). Tom made it up first, quickly followed by Harris, and then somewhat more slowly by myself. We didn't linger long on the top, since I think we would have been blown away

! Here's Harris trying his best to hold on: 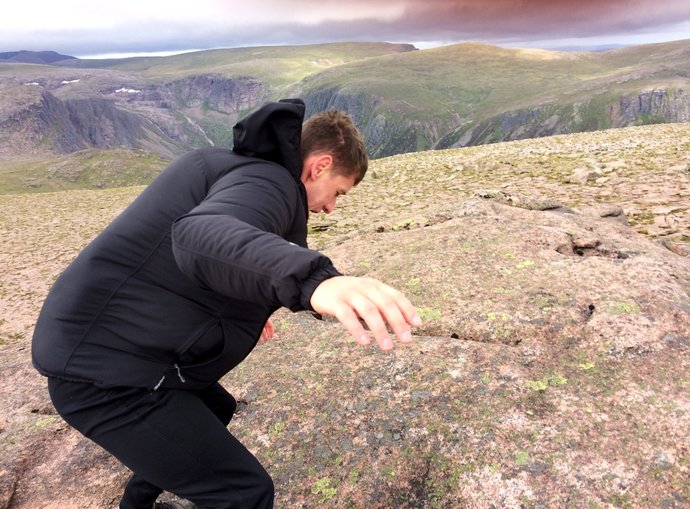 ...And Tom on his way down, trying not to laugh too much at the sight of the two of us getting blown about: 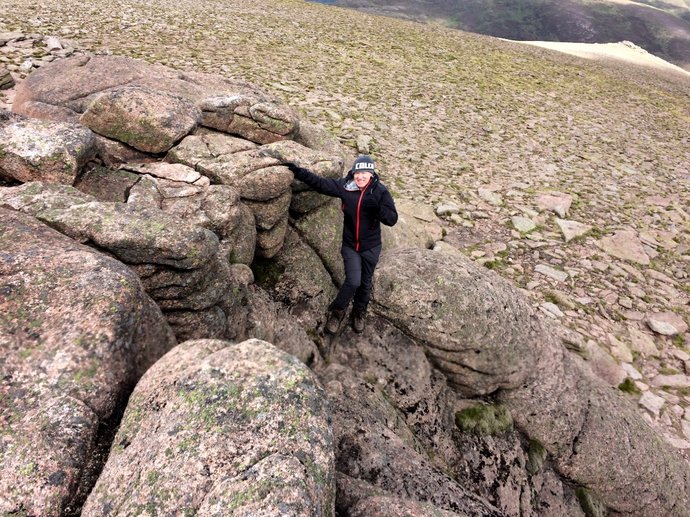 Having successfully bagged the summit despite the gentle breeze, we had a quick lunch in the lee of the summit tor, enjoying an interesting view eastwards towards Ben Avon's impressive summit tor. 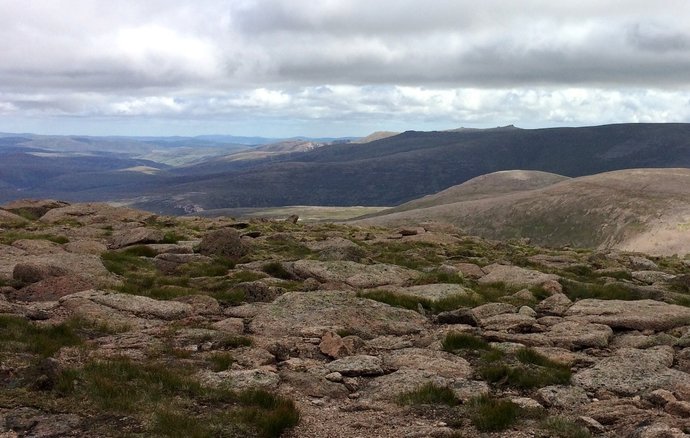 We now headed back down (against the wind this time

) to re-join the main path beside Loch Etchachan and head back northwest over the plateau towards Loch Avon. Here is another nice pano shot of Loch Etchachan and (still cloud-capped) Ben Macdui that Harris took on descent from Beinn Mheadhoin:

Before long, we were descending again (scenic, but with a rather depressing amount of lost height that would have to be regained on the other side of the loch

) towards the western end of Loch Avon. We headed back past the Shelter Stone Crags and re-crossed the Feith Buidhe (with slightly more faff this time, at least on my part, but still thankfully dryshod), then headed a short distance up the northern shore of the loch, where a slanting path cuts diagonally up right to climb Coire Raibert fairly steeply by the right side of the stream. The start of the Coire Raibert path is visible in this photo: First, however, we stopped for a bit of sunbathing on the beach. 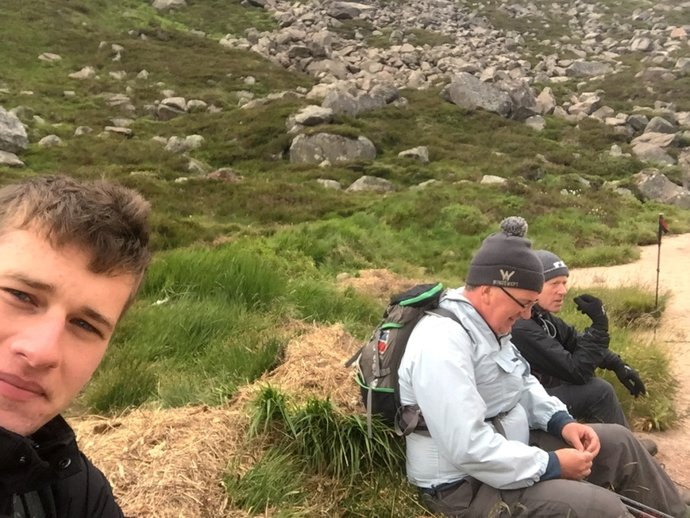 At this point, we were unexpectedly joined by a couple of friendly lassies who had climbed down the Coire Raibert path and were planning to continue up to Loch Etchachan and eventually head to the Hutchison Memorial Hut for the night. I can't remember whether they said they were planning to bag any of the peaks on the way there. Anyway, we passed the time of day and then headed off in opposite directions.
The Coire Raibert path wasn't too steep to start with, although there were some mildly scrambly sections over fallen boulders. 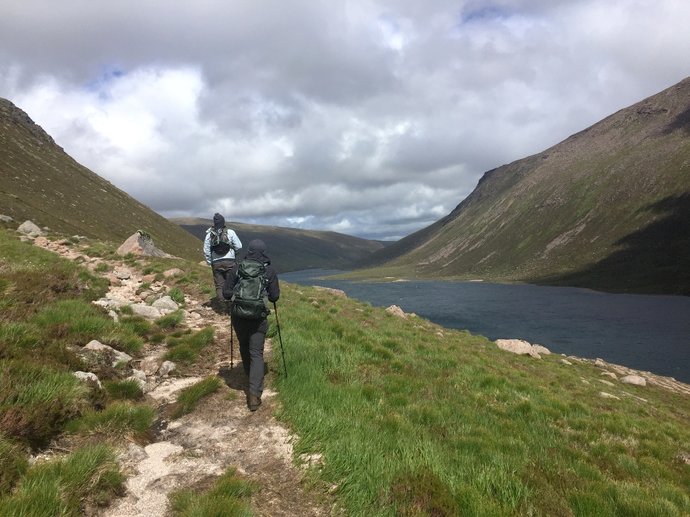 Once it crossed the stream in the corrie proper, however, it suddenly got a lot steeper. I found it rather hard work this late in the day, although again the very impressive scenery offered welcome distraction. Here's Tom in scrambling action beside some nice waterfalls on the Allt Coire Raibert: 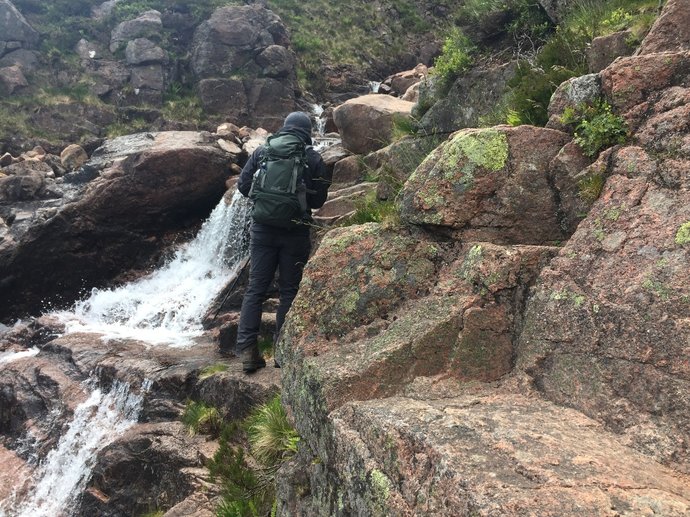 'Does my bum look big in these breeks As we topped out again at the head of Coire Raibert, there was a lovely view back to Loch Avon, looking a long way down now. (Incidentally, if I look to be in late second trimester of pregnancy in this shot, that's because I had stowed my Toorie Bunnet and gloves in the front pouch of my kagoule 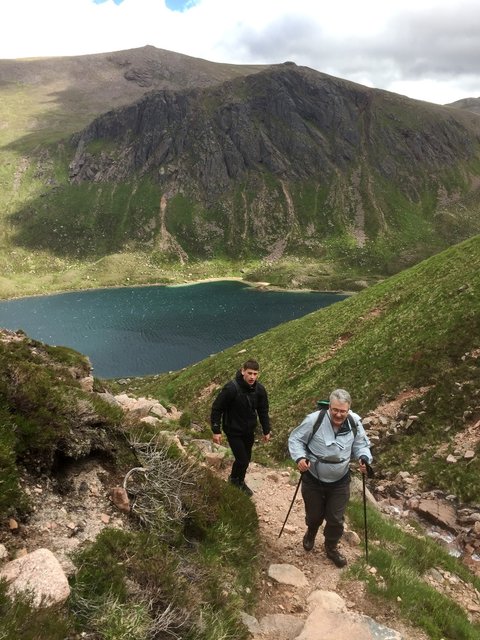 We now briefly debated whether or not we had the energy to battle the gales again to bag Cairn Gorm summit. However, given how close the summit was to where we now were, we were unanimous in thinking that there was no way that we were going to go back to the car park Gorm-less

!
Thankfully it was a very straightforward plod up the last hundred metres or so of Cairn Gorm's rounded summit. We paused at the cairn for a quick photo-shoot, trying our best not to get blown away... We descended the fenced-in path down to the Ptarmigan Restaurant, then headed back downhill to the right of the funicular railway and ski paraphernalia. In fact, unfortunately a bit too far to the right: we went a bit off-piste and found ourselves descending towards the wrong car park (the Coire Ciste one instead of the Coire Cas one), so we had to traverse quite a long way back west to re-join the path down Sron an Aonaich. We found the path in the nick of time, in fact, since high wind and driving sleet accompanied us back down to the car park. Ah well, at least we were nearly home by now...
Back at the car, we were all agreed that we were very glad to have taken this scenic route to Beinn Mheadhoin, rather then the longer and easier but less scenic route from Linn of Dee. Off for fish and chips at the Happy Haggis in Aviemore, then back home