Strangely enough, these two hills hadn't even been on my radar, but I had a few days off work for walking purposes, and the Friday 2nd June was one of those rare days when the forecast was looking Best in the West

... After a quick look at my options, I revised my initial plans and decided that it might just be time for Dick Dastardly to try to Catch the Spidean (and hopefully Gleouraich too, with a bit of luck

).
I managed a reasonably early start, and after enjoying the scenic drive along Loch Quoich, I found the car park at NH029029 where a stalker's path heads up through the rhododendrons in the direction of Gleouraich. However, as recommended in the website's route description, I opted to use this as my descent route, and headed along the road eastwards for about 400 metres to find the end of a second stalker's path, this time heading up to Spidean Mialach. The start of this path is currently marked by a plastic pole, but may not be for much longer, as said pole appears to have Fell Over fairly recently, as shown in the photo below: I headed up through the rhodies and then through the pylon line, quickly gaining a good view down Loch Quoich, complete with a wee island: A bit higher up I got my first look at Spidean Mialach, although it still had its head in the Clag at this point

. 'Spidean Mialach' can either be translated as 'Lousy Peak' or 'Peak of the Deer', depending on your choice of Munros book; presumably 'Mialach' must be one of these Anglicised Gaelic words that could come from either one of two similar Gaelic roots. I think I prefer the cervine translation, on the whole The route around these two Munros arguably only has one decent view, but at least it's a cracker: the classic vista southwest across Loch Quoich, with Gairich immediately opposite, and the unfeasibly shapely peak of Sgurr na Ciche away out west The well-constructed stalker's path ends at a stream trifurcation, no less, on the Allt a' Mheil around NH049037, but nowadays a rougher and more indistinct baggers' path has developed almost all the way up the Spidean, starting just to the left of the smallest of the three tributary burns, the one that starts on the right-hand side of the branching point. This is the start of it in the photo below: I reckon it is well worth trying to find, because it definitely finds the easiest line through what would otherwise be fairly rough ground beyond this point. Spidean Mialach is one of those hills that sports a Halfway Lochan, which in this case is known as Loch Fearna. It is in the foreground here, with yet another shot of Gairich in the background: ...And That View again, with Sgurr na Ciche looking even more improbable in the patchy sunshine: 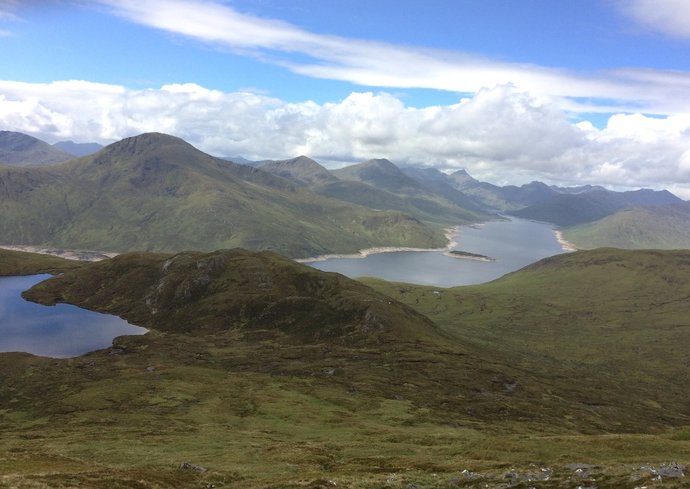 Fifteen minutes higher up again, and now Sgurr na Ciche was looking all romantically brooding, in the shadow of a cloud. (Well, I did warn that these hills only really have the one view 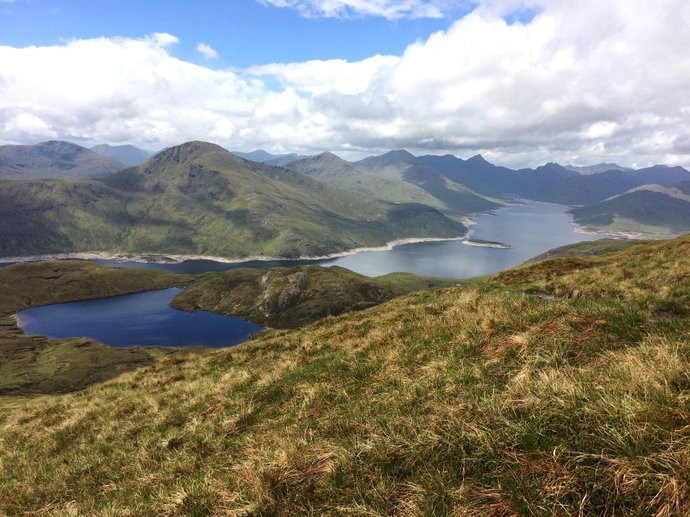 The baggers' path eventually peters out amidst some boulderfield a couple of hundred metres short of Spidean's summit ridge, but by now the way up was very obvious. On topping out on the ridge, there was a lovely moment of revelation, with the hill's dramatically rocky northern corries suddenly coming into view, along with the unfamiliar grassy south side of the South Glen Shiel Ridge. The summit itself was just a short distance further east: When I got there, it proved to be sporting a rather Gnarls Barkley pair of summit cairns: a tall skinny one and a short chunky one. It also had yet another grand view down Loch Quoich, just for a change Catching the Spidean had actually proved easier than I'd expected so far, but I wasn't sure that the same would apply to Gleouraich. In fact, just spelling it is challenge enough

! Although its Gaelic monicker is admittedly rather beautiful (another cervine reference, apparently meaning "The Roaring (of the stags)"), it does make me wonder just why the Gaelic language insists on using all five vowels, no less, to spell something that just gets pronounced 'Gloorich'

! Anyway, it is one of a very select few words that contain all five vowels only once. For any fellow Anoraks out there who might enjoy further Sheldon Cooper-style 'Fun with Vowels', I would definitely recommend Christian Bök's extraordinary and undefinable book, 'Eunoia'... but I digress. Again

.
This is what Gleouraich actually looks like: a rather shapely peak from this angle. On the way down to the bealach, I met the walker just visible in the distance in the photo above, who commented on the remarkably well-built stalker's path that goes up Gleouraich from the car park. A bit further on, I met a young couple who said exactly the same thing: in fact, they described it as 'probably the best path in Scotland'. It was definitely something to look forward to, by the sounds of it

!
From the vicinity of the bealach, Gleouraich was starting to look a wee bit intimidating, but in fact there turned out to be an excellent path that finds a fairly easy way all the way up. Another unfamiliar rear view of the South Shiel Ridge, from the vicinity of the bealach: Unfortunately the Clag descended with a vengeance for a good twenty minutes or so, and it started to rain quite heavily. It didn't last long, however, and just short of Gleouraich's summit ridge I got a nice view back to Spidean, almost Clag-free, with Loch Fearna down to its right: The Clag was coming and going all the time now, and it didn't look as though I was going to get a summit view on Gleouraich

. However, there was a nice hazy view down a chasm towards the steep northern corries: these sort of views always look that bit more precipitous in Clag when you can't see the bottom clearly! The Clag was really starting to boil up from the north now, but presumably Gleouraich's summit was up there somewhere! A nice wee cloudscape from just east of Gleouraich summit, with heavy rain further west down Loch Quoich, by the looks of it: Another pleasantly hazy view over Lochs Fearna and Quoich: Unfortunately the summit itself couldn't quite muster a view, but at least it had a good big cairn! A rather wet and glaikit summit selfie: Descending westards off the summit, I fairly quickly got down below the Clag again, and grand views opened up to ... yes, you guessed it, Loch Quoich again The stalker's path truly did turn out to be a Thing of Beauty and a Joy Forever, and a real tribute to the poor guys who must have put some back-breaking work into constructing it, back in the day.
If Carlsberg did stalker's paths.... Although it didn't really seem like it today, it has of course been an unusually dry spring and early summer so far, and the water level was looking remarkably low on Loch Quoich's northern arm on descent: The Best Path in Scotland certainly made the descent route unusually pleasant, and on the whole this turned out to be a surprisingly easy yet satisfying round. Spidean, caught