Fionn Bheinn and the fairy cloud

Fionn Bheinn and the fairy cloud


A short walk, trying to make the most of a fine morning before wind, rain and cloud arrived. I took enough for a light lunch, in my smaller pack, but ended up hardly touching that until back down from the hill. Track up from Achnasheen

There are several signs up to guide walkers by the preferred route, past a small run-of-river hydro project then by a wet, unmade path on the east side of the Allt Achadh na Sine. Signs and gates for the path After a bright start, with good views across to some of the Monar hills, cloud increased and lowered with growing blustery wind. I ascended by the rough, wet path alongside the burn, then crossed the boggy moorland before turning right towards a minor southern shoulder of the hill. This coincided with the weather turning, following bright conditions and hints of showers. Creagan an Laogh, just before the rain

The cloud came down around 700 metres and rain began, together with strong blustery winds. After putting on waterproofs, I persisted uphill onto the main eastern ridge, reaching a shoulder with small stone outcrops.

From here, I turned west into the worst of the wind for a slog along the crest. This should have been pleasant in better conditions, but at least the ridge was broad and rounded enough to feel safe even in the wind and limited visibility. That was important since I could tell there was a significant corrie dropping away to the north, on my right, though its extent was hidden by dense cloud and stinging rain.

I forced my way up to the summit and trig point, but hardly paused before turning left to descend and lose height. That did lead down to some steepish grassy slopes, but at least the wind relented as I worked lower, then granted views of the way south across the peat plateau. It felt like a long time, but checking the gap between photos, I'd been in the cloud for little over 30 minutes, partly because that had prompted me to just push through and keep on going.

Conditions brightened underneath the cloud, though that remained higher up. 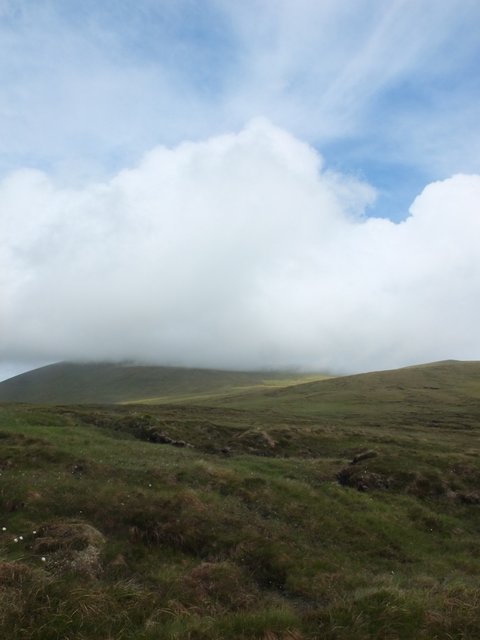 Blue skies, but cloudy on top

After recrossing the moorland by faint tracks, I crossed at the small hydro dam and used a vehicle track for my descent. That did require crossing the burn (without a bridge) once I got back to the generator building, as the gate to the track is padlocked without pedestrian access. Hydro track back down

Back at the car, I changed from my boots and set my waterproofs to drying. Then enjoyed a more leisurely lunch in a small picnic area beside a pretty pond. Though not all that leisurely, as another shower sent me back to the car before I could start lounging seriously, as well as interrupting some other folk who'd hardly settled at another of the benches.

I did enjoy some better weather that afternoon, for more effective lazing around Rogie Falls and Strathpeffer. That even put me in the mood to venture out once more, towards the evening but that, as they say, is another story.

As for the fairy cloud? Well, it was raining into the Allt Achadh na Sine, so that seemed pretty obvious to me.