Return to the Lyons den!

Return to the Lyons den!


I had attempted this round last year only to find the route was blocked by forestry works and I had initially felt that I wouldn't bother trying again, there are plenty more hills and nice walks to do, but after reading a couple of recent reports where access was no longer a problem and with the weather forecast looking decent, I decided to give it a second go well before the stalking season starts. It was in part because I wanted to get to 30 Munros before I go on holiday, and the pair I would particularly like to do I want to do when the weather is really nice (or until I get fed up of waiting for nice weather and go for them anyway!). I set off early and arrived at the empty car park about 8am and off we set. No problems this time, though the path through the felled forestry area was covered in branches. Following the orange and green waymarkers (several signs remind walkers to follow the waymarkers, can't have anyone going off route...) we crossed a shaky bridge with a plank missing and started our ascent up towards our first summit of the day - Carn Gorm. On the way up we realised we had been spotted, there were a number of red deer grazing on the hillside. Of course,they quickly moved off when they were seen heading across to the other hill where there was a larger group of deer. The way up had several false summits, and as we approached the actual summit cloud started blowing across. Fortunately unlike some of the hills in the distance the cloud didn't hang around and we could see down into the valleys below and across to other mountains. The summit marker lay on it's side but provided a good platform for Moss to sit and pose for her summit photo. We continued on, the path easy to see below us curling around a neighbouring hill before leading up to our second summit of the day - Meall Garbh. My 30th Munro and Moss' 25th. Heading down we were watched closely by some sheep, there were a lot of sheep up here! Even if it wasn't requested by the estate that dogs be kept on leads, leads would be needed because there were so many sheep anyway. And some of the lambs were at that bold stage where they don't move until the last minute! Their mum keeping a close eye though...

Further along the path, something else was playing chicken, a frog on the path that almost got stood on by Moss! Avoiding the frog, we continued to follow the path along, which is mostly alongside some fenceposts, to Meal a' Bharr. I'm guessing this is a Munro top? Whatever it is, as we climbed up to a marker cairn there was suddenly a great view across to Schiehallion! From here the fence posts stretched out across to the third Munro of the day - Carn Mairg - and the paths (there were a few choices but all rejoined at some point) could be seen leaving the fence posts and avoiding the rocky part of the ridge. It didn't seem to take long to get across to here, first stop though was the rocky tor that we climbed up to before heading on up to the summit itself. Meall na Aighean or Creag Mhor - whatever you want to call it by - now lay ahead the paths clear below us (there was three of them but again all joined together eventually. The final summit of the day, another climb up...I'd only ever done a round of three before and that was the Cairnwell Trio, a much shorter distance that took nearly half the time of this round. Looking up at Creag Mhor I did have a moment where I thought I'd just skip it and head down, but we started to ascend once again. Sheep directly ahead made it a bit easier, Moss was pulling forward (until we got closer and she went into the classic sheepdog stalk-mode). One sheep stood out though, just look at it's tail! It was very strange to see a sheep with a full tail. How it had avoided getting it docked I have no idea. The fascination at seeing a sheep with a tail made the ascent easier as suddenly we were at the baleach and it was just a short walk across to the final summit - Munro 32 for myself and 27 for Moss. 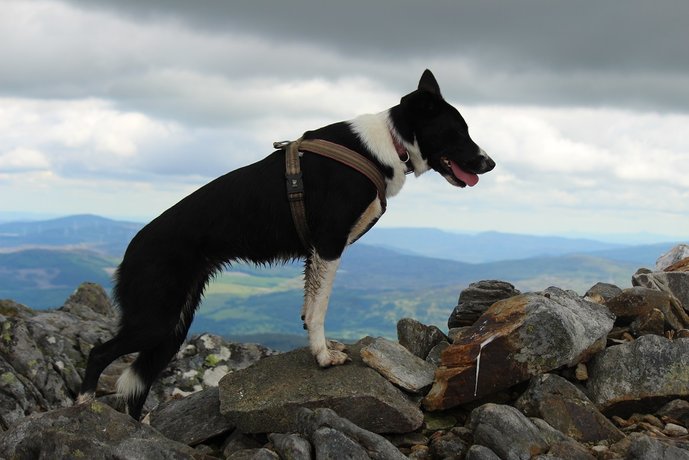 From here it was a long long long long long long long walk back down. The descent felt like it was taking forever. There was a clear path to follow stretching out ahead along the shoulder but it was ages before at long last the outward path came into view and then, finally, the gate back into the felled forestry area and down to the car park where four other cars had joined mine. The whole trip the only people I saw were two figures behind me in the distance. I had actually thought that they'd overtake us but every time I saw them there were no closer and on descending Creag Mhor there was no sign of them at all. I didn't see anyone else the whole walk, not even in the village. Just as well I have Moss for company! I was there on Sunday, horrendous day with the weather, so that's what it all looks like!

Hope you manage to get them done this time, I had Ben Lawers as my alternative if there were any problems (also part of the reason why I was there so early) but fortunately didn't need an alternative. It's a nice round, apart from the forever going downhill bit

Jokester wrote:I was there on Sunday, horrendous day with the weather, so that's what it all looks like!

I was lucky with the weather, when I first checked the forecast it said rain, then it kept saying fog, then it went to just cloudy and on the morning it was forecast for sunshine and sunny spells. As it was, it was mostly cloudy but though the summits were in cloud as I was walking up it had gone by the time I reached them

Congratulations for reaching your target and completing a round of four