Backside-battering on some obscure Corbetts

Backside-battering on some obscure Corbetts


I wanted to get out on the hills but with the end of term looming I was too tired to formulate a plan. So I messaged Colin, who made a plan. I followed said plan and we met, combined bikes on his rack

and headed up the road.

It was really nice to have some company and (for me anyway) the journey went by very quickly and we parked up on a handy layby on the Southbound carriageway near the Trinafour exit after Colin managed a very nifty manoeuvre to dodge the roadworks.

Bikes unloaded and boots on, released the Hound (just the one this time

) and set off up the track. This was Jura’s first time out with bikes so we were cautious at first

After an initial uphill, the track flattened out and we were into the trees. Here is Colin fannying about with his saddle. 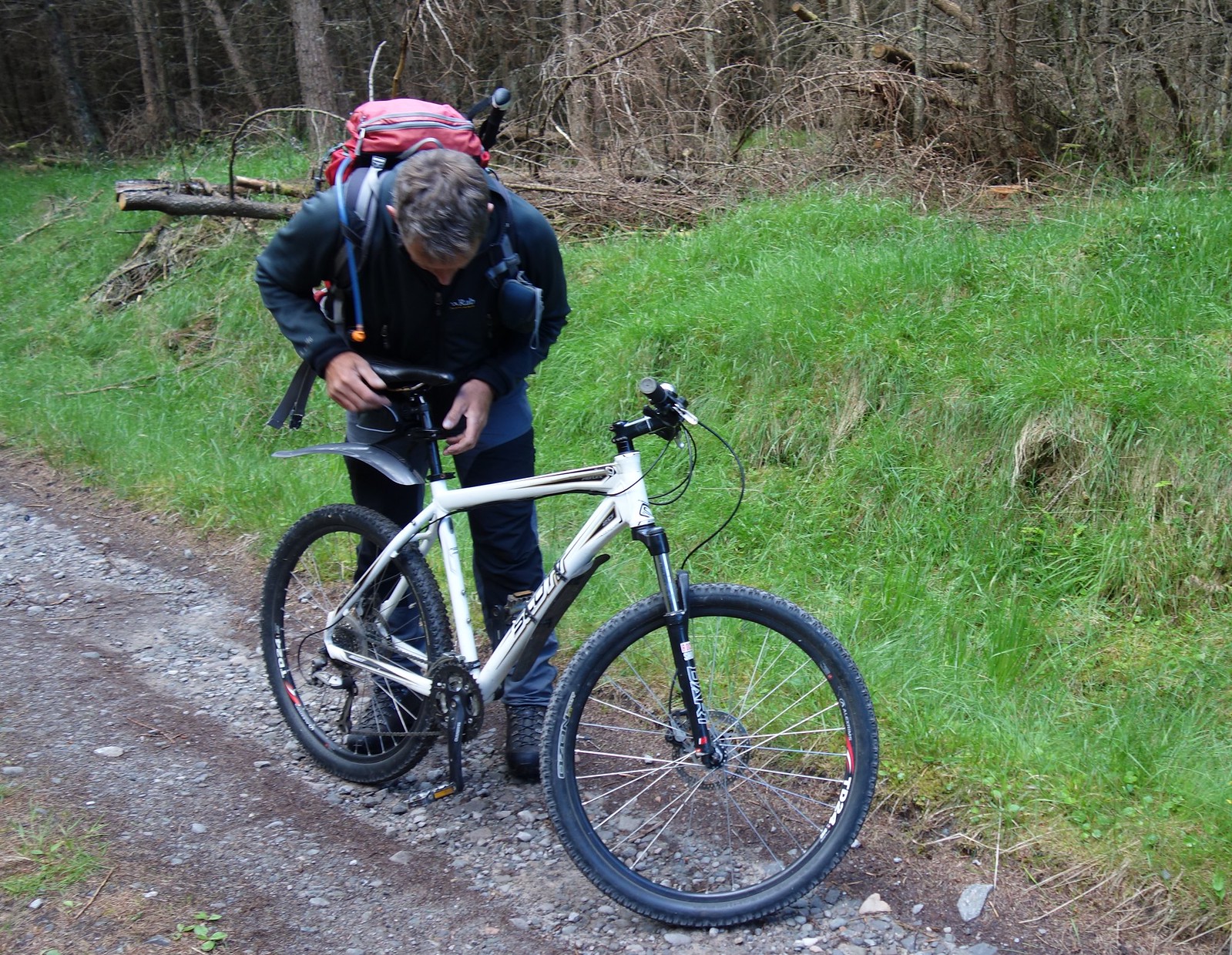 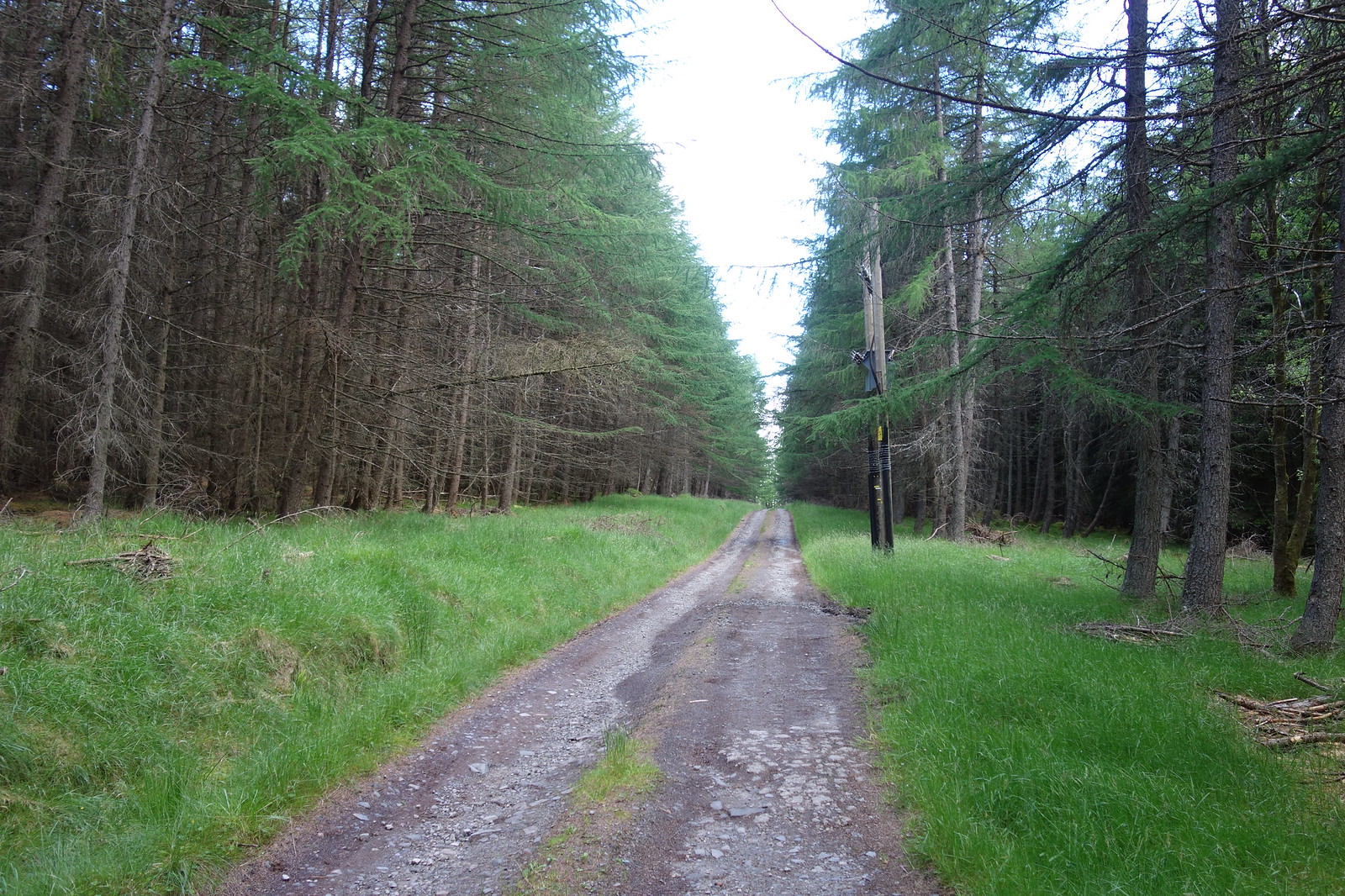 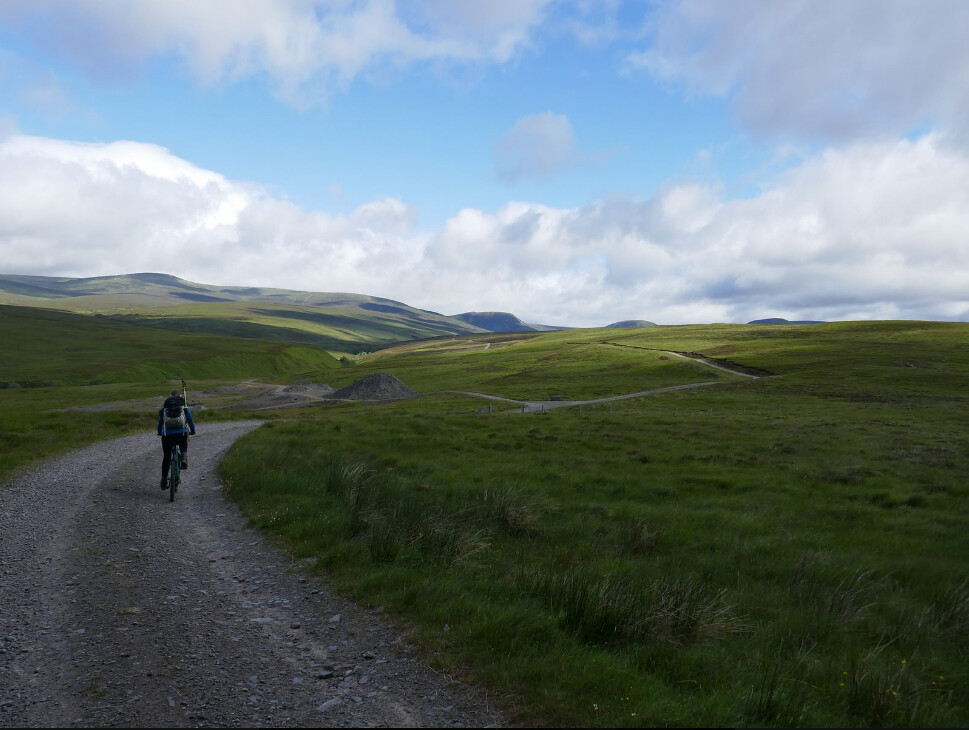 A short distance further, we emerged from the trees to a panorama of rolling hills. The sun was out and it looked to be a good day

Jura hadn’t quite got the hang of Humans on Big Metal Things, and there were a few close calls which made me realise I should probably sort my brakes out

A downhill section – gonna hurt on the way back!

Speaking of hurting….I’d come out on a bike with no suspension without my padded shorts. Rookie error

Me trying to work out how weak the bridge was… 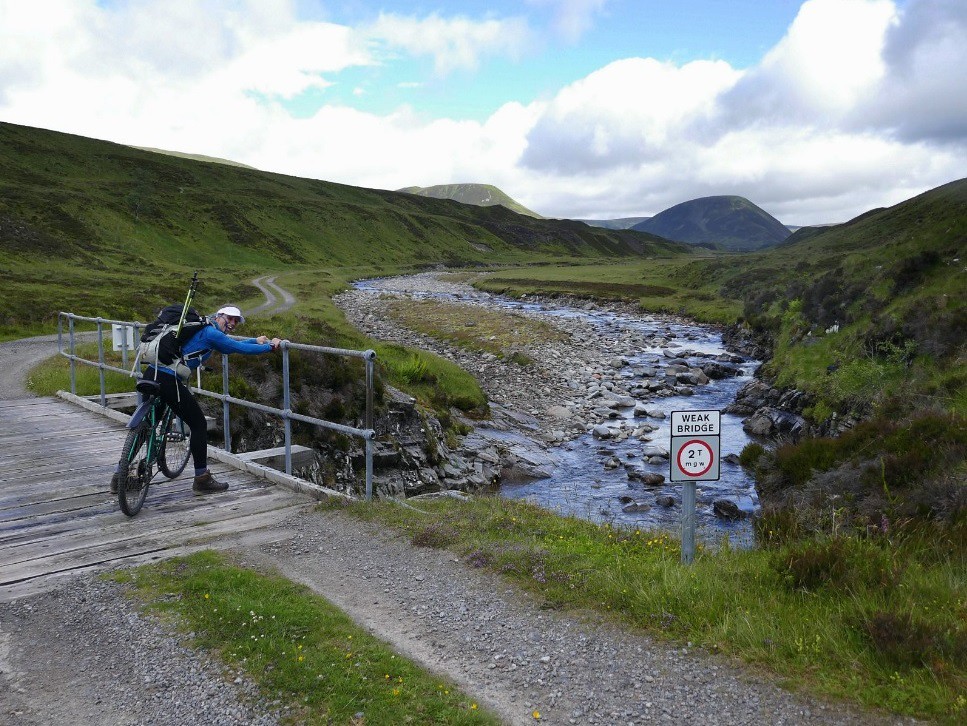 I was the guinea pig… 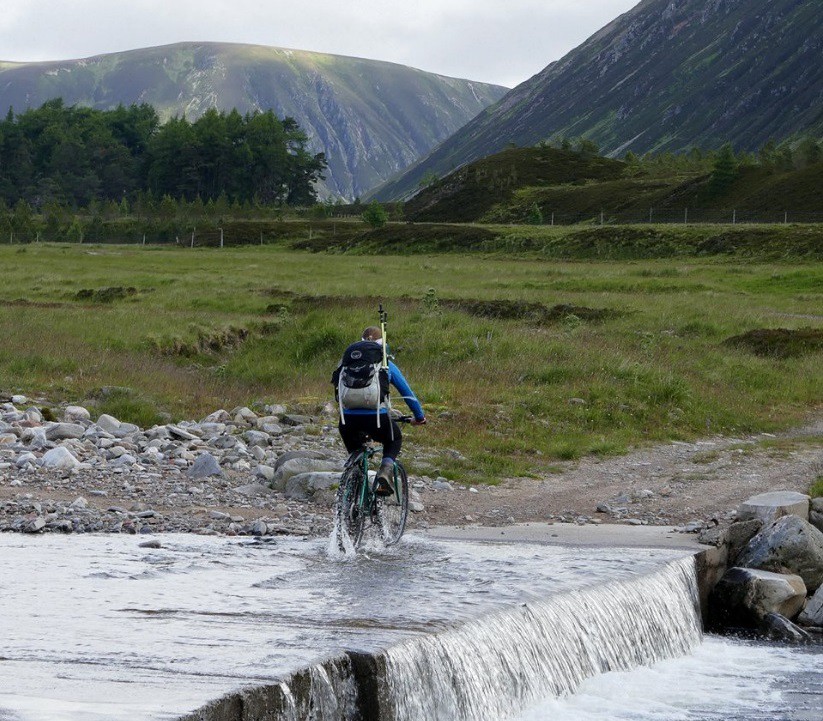 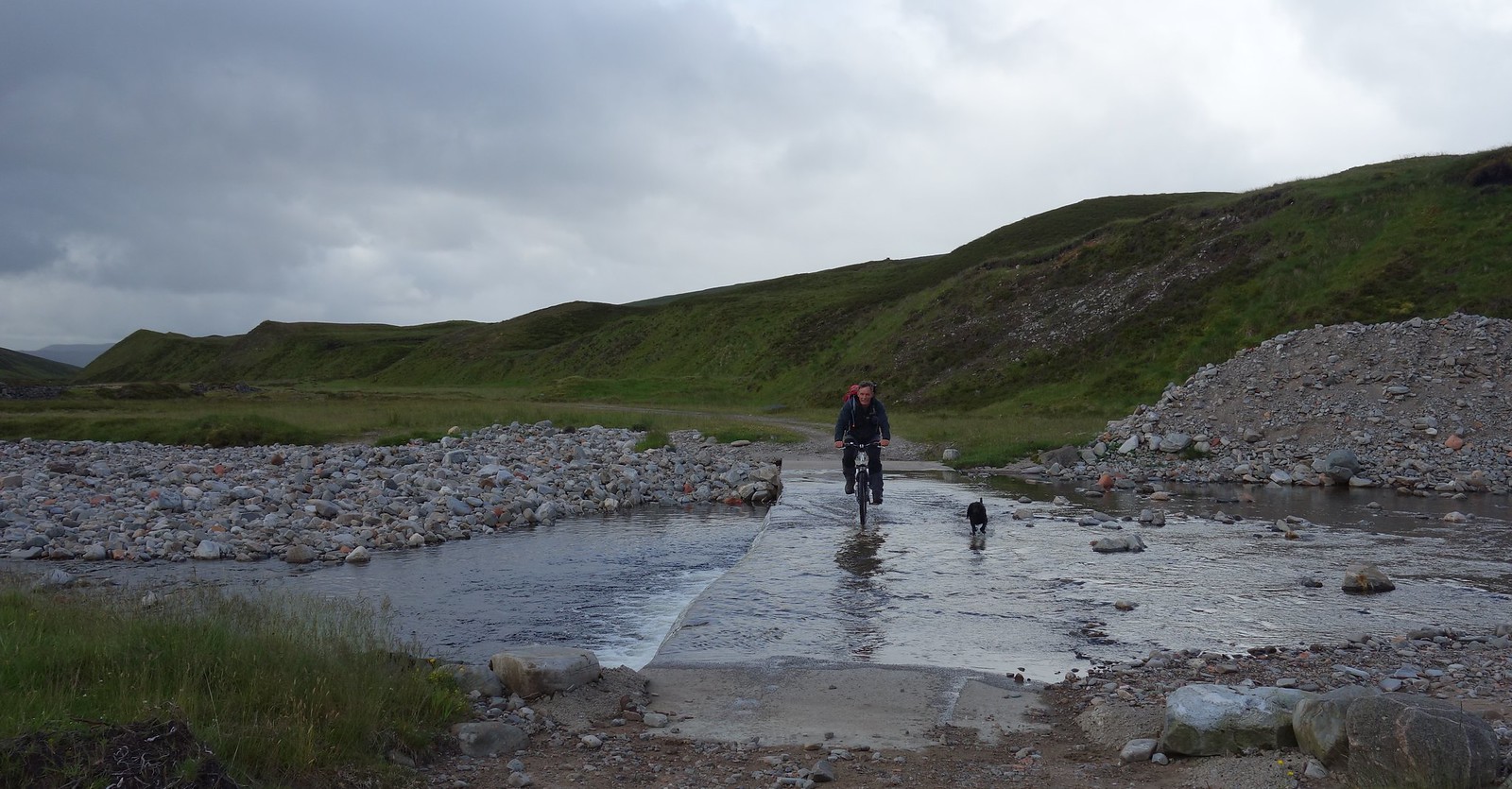 We dumped the bikes by the fence and continued on foot, picking up a vague path. 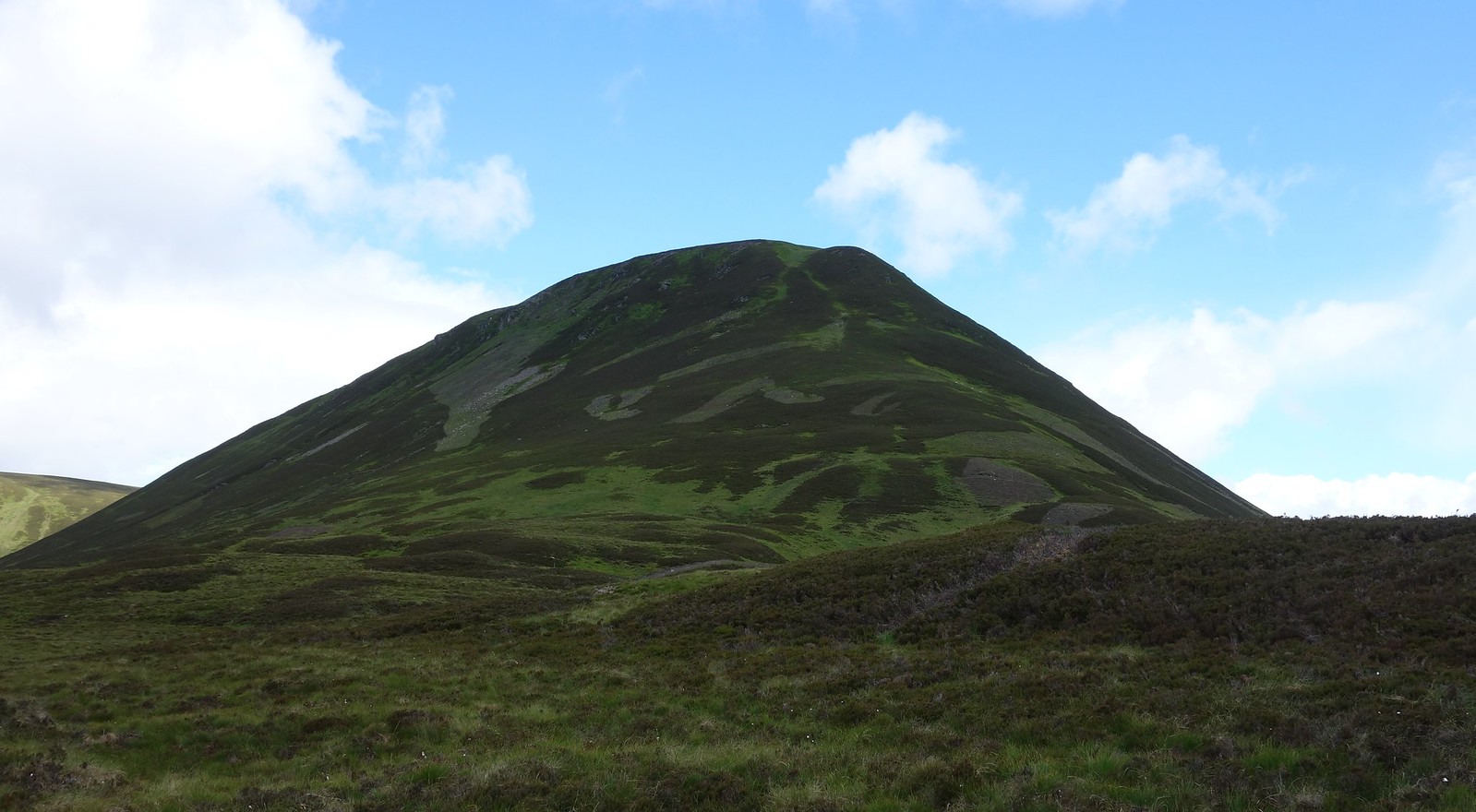 Looking back towards Sronphadruig Lodge 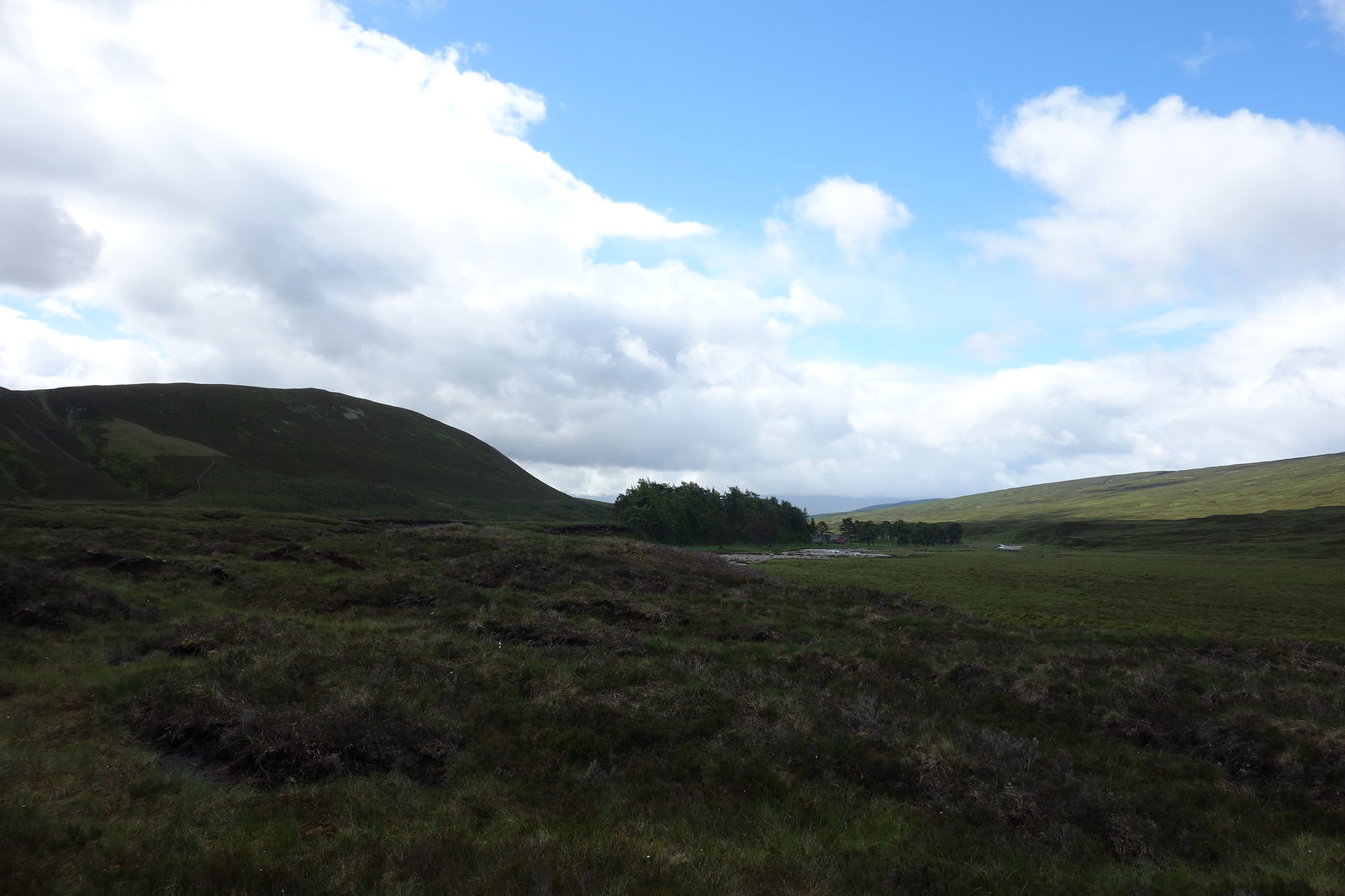 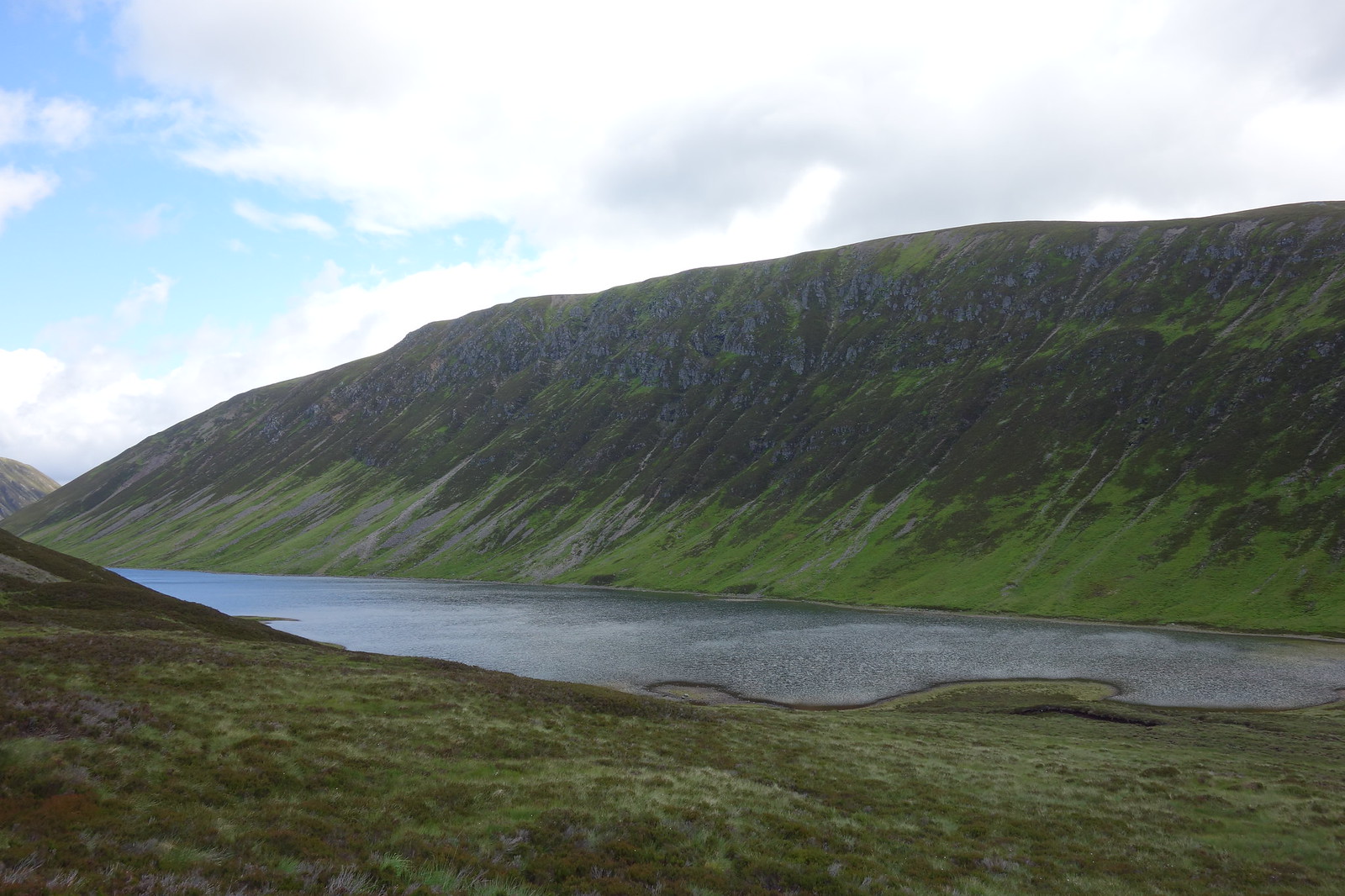 We were enjoying the path and the banter until Colin said “Aren’t we supposed to be going up this hill not around it?” 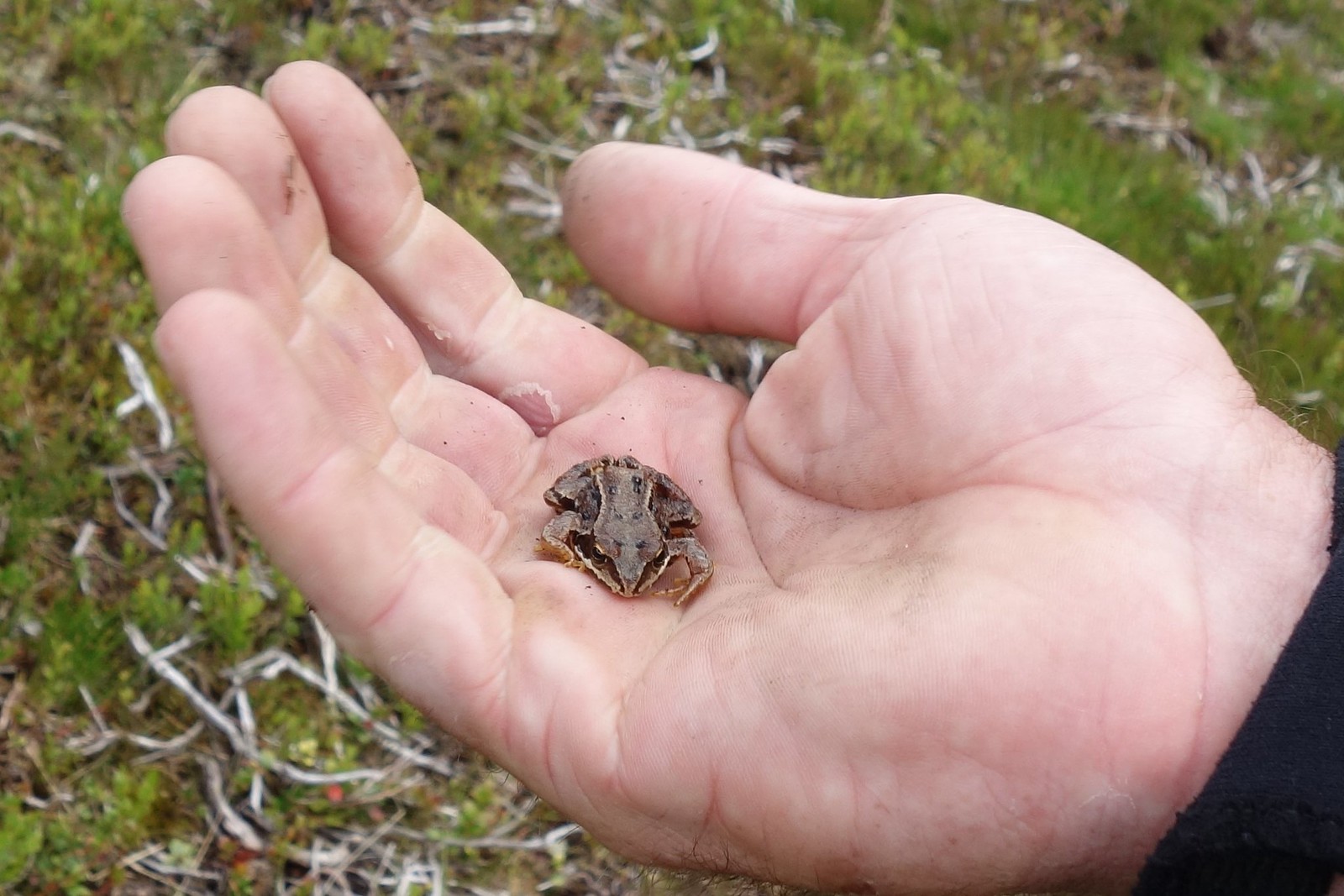 It was steep but nothing we couldn’t handle. The beauty of steep is it gets you up pretty fast

Looking back down the valley 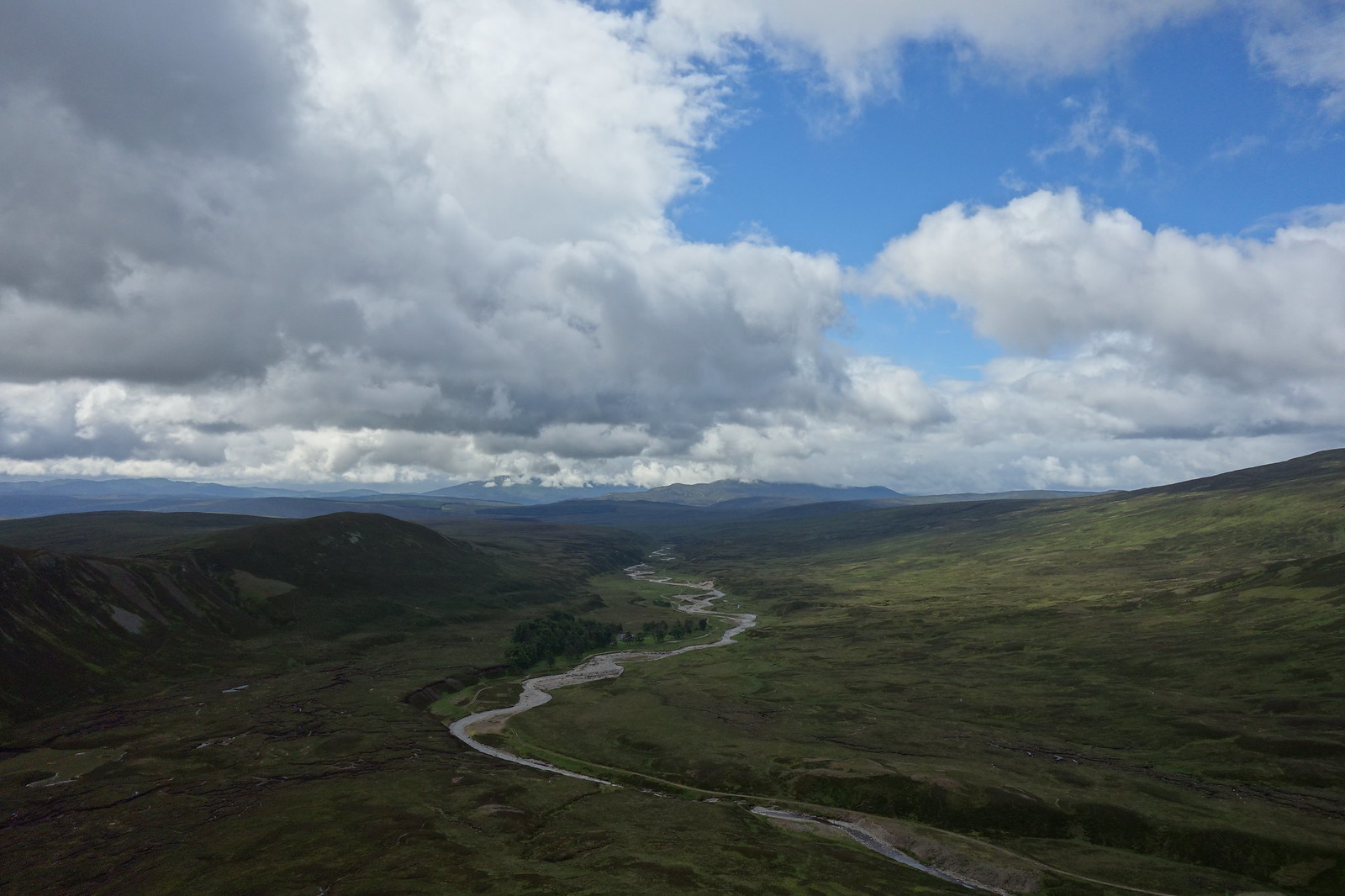 Eventually we met something of a path and two people who we had passed on the ride in. Turned out the dude worked with Colin….small world

Colin and Jura having a breather (or a “photo break”

We reached the very flat top and the first cairn. According to the map this cairn and the next one are the same height, but we had to visit them both anyway so it didn’t matter. 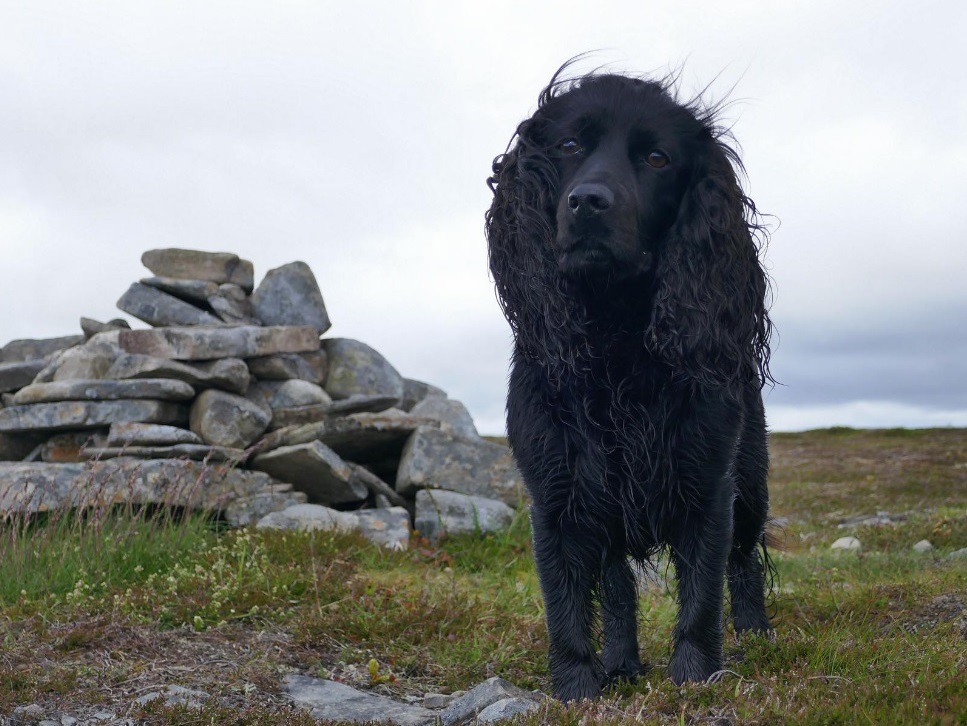 Looking ahead to the second cairn and the other people

Back the way – an interesting skyline! 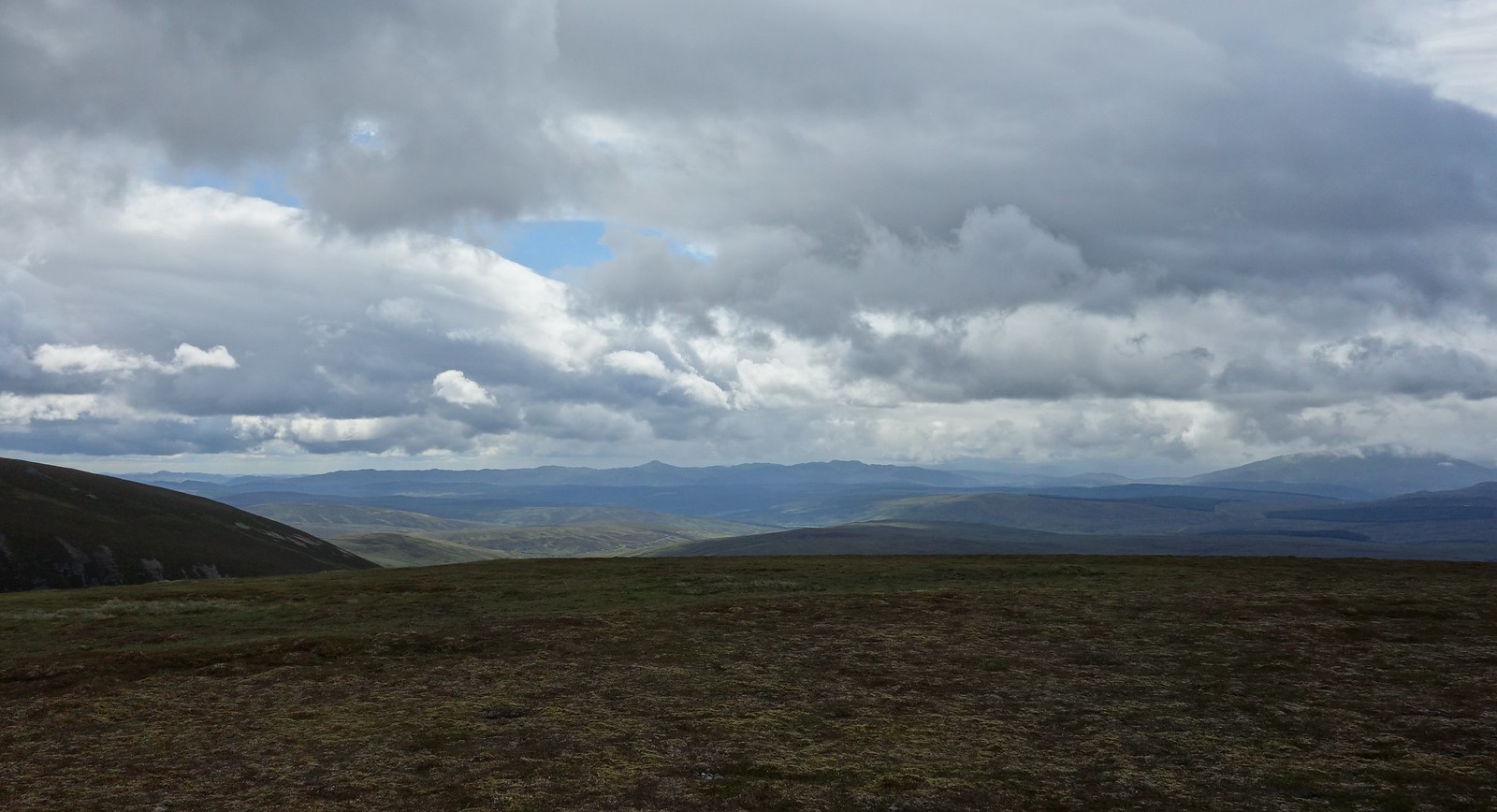 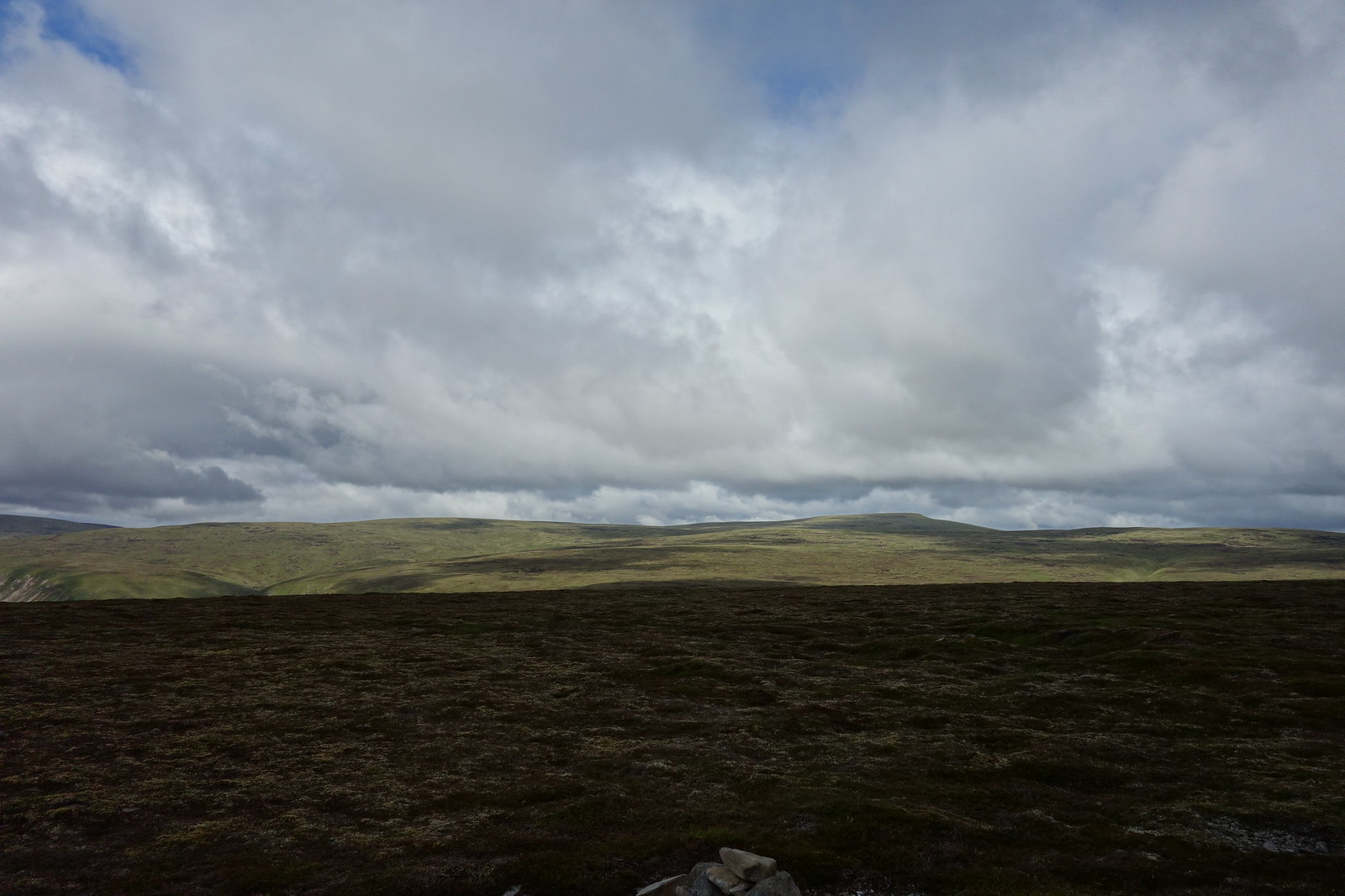 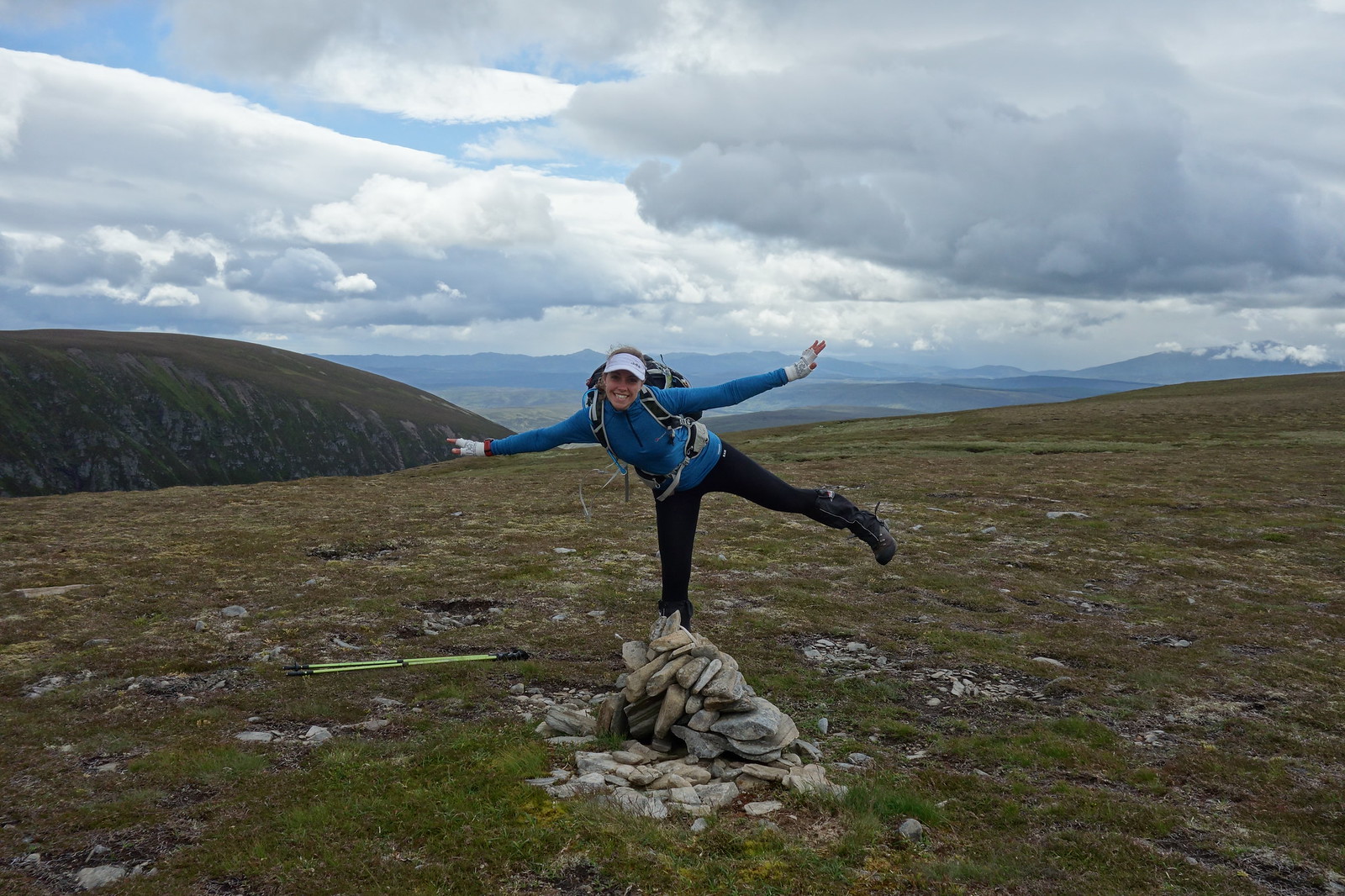 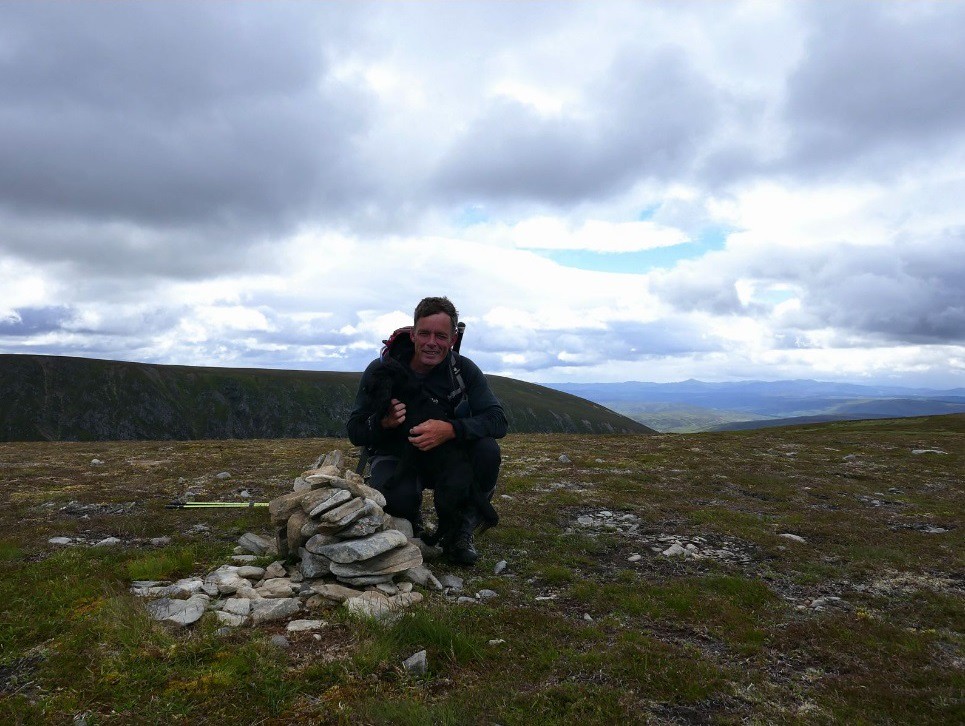 Summit rituals completed, we were off again. The ridge continued for a distance, but then we had to bite the bullet and head steeply down. 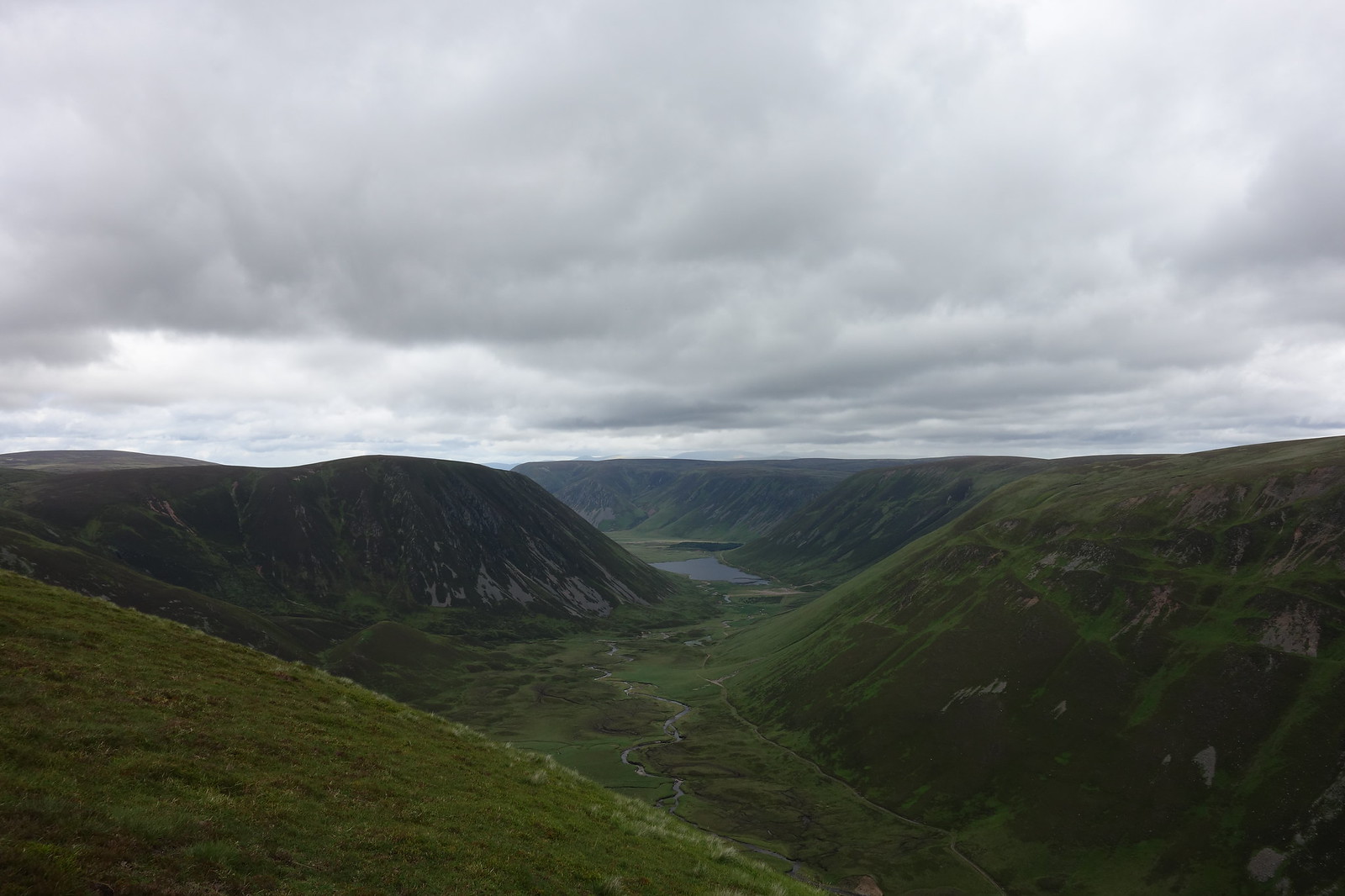 but fortunately after some careful stretching it seemed to disappear. Easily across the river, we decided to have a lunch break. However, mid-sandwich the weather arrived and we hastily put on waterproofs. This gave Jura the opportunity to make a bid for freedom

Fortunately the shower didn’t seem to be passing anytime soon, so it was time to get going again. We had thought the forecast was to improve throughout the day

We had decided to cut off some distance and just head up the steep bit: 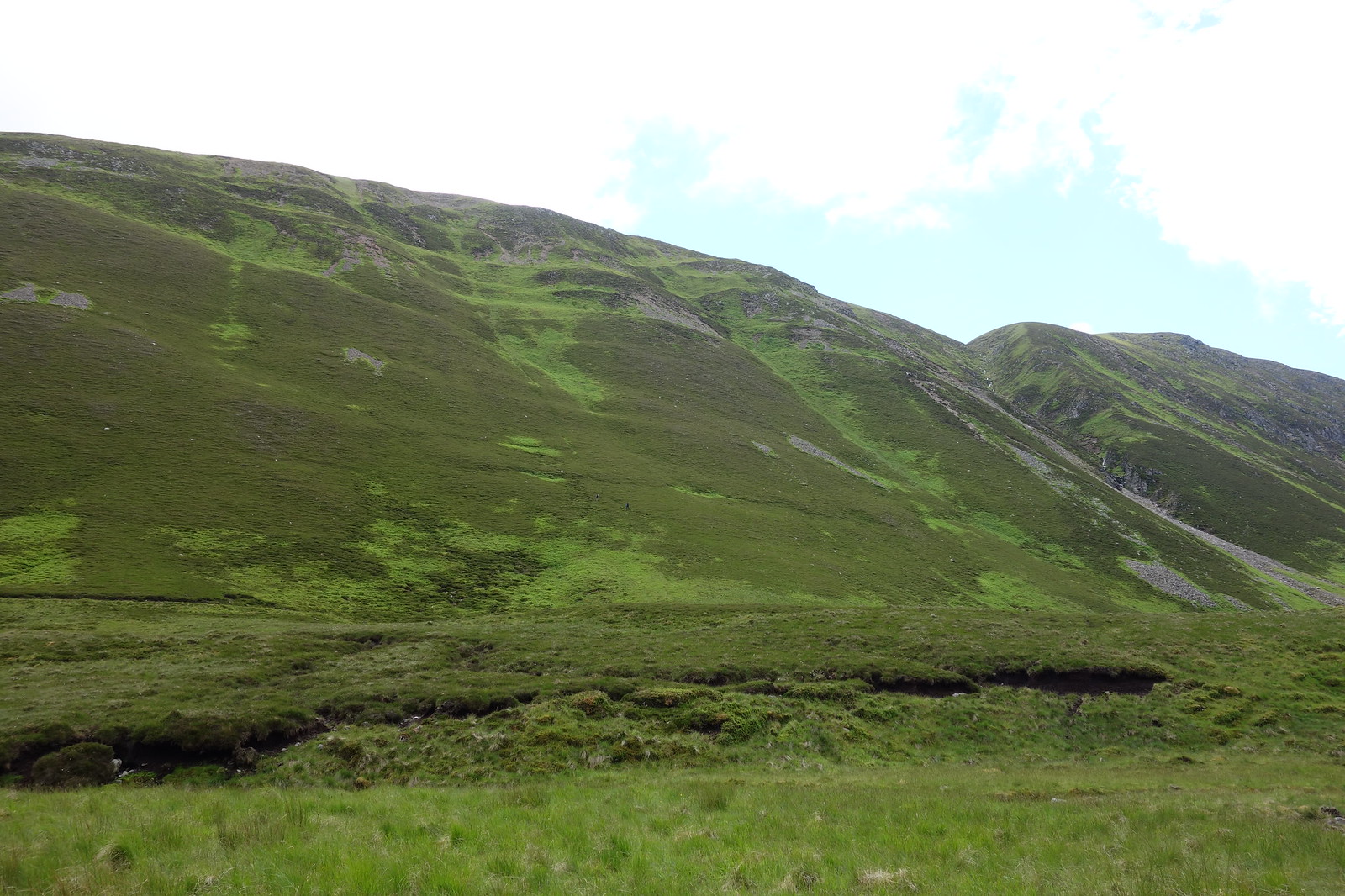 A glimpse of clarity 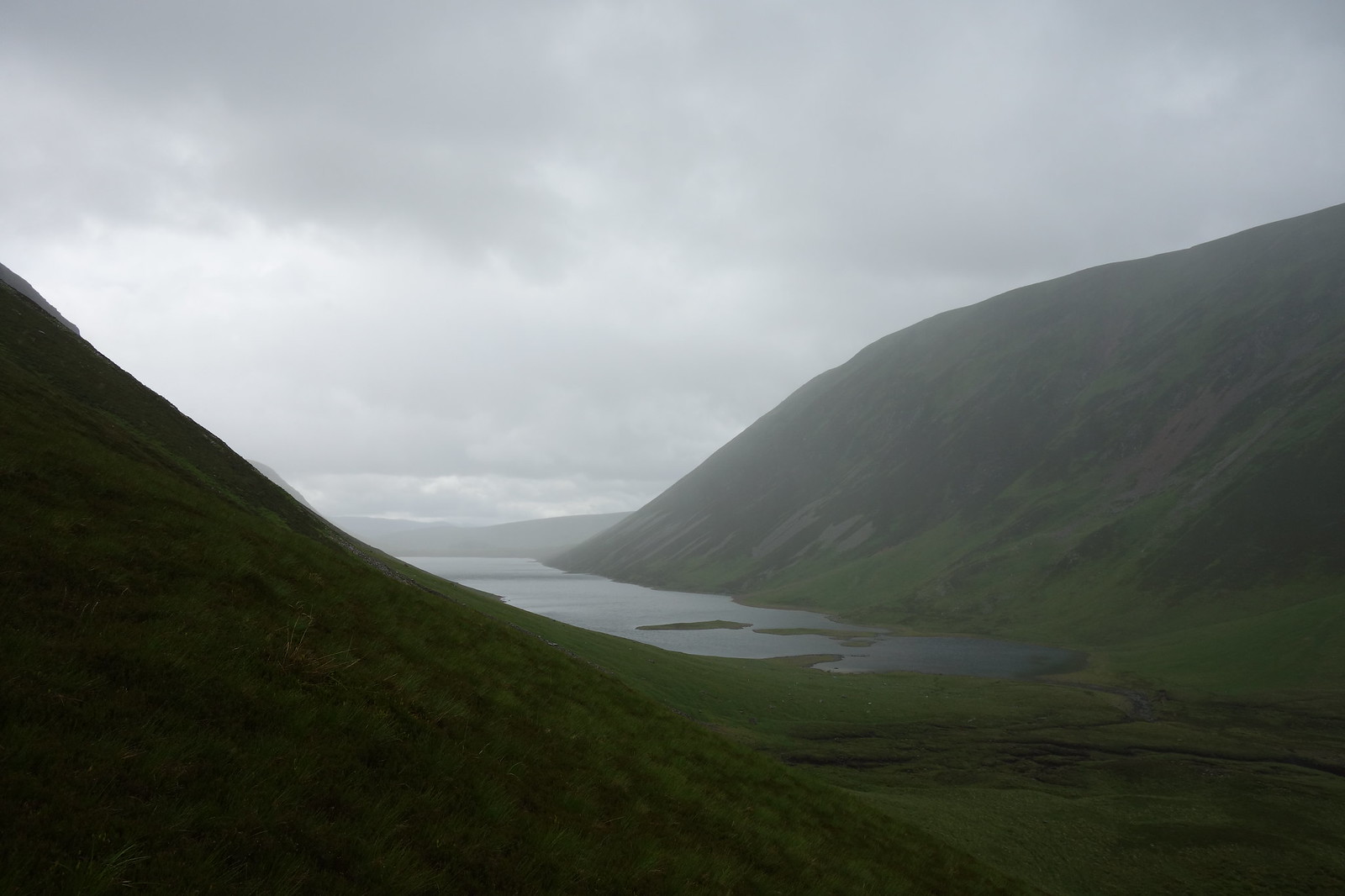 It was a case of head down and get on with it, and we gained height quickly although not necessarily with any dignity….Wet grass, need I say more?

Once up the worst of it, I spied a wee ridge heading diagonally upwards. 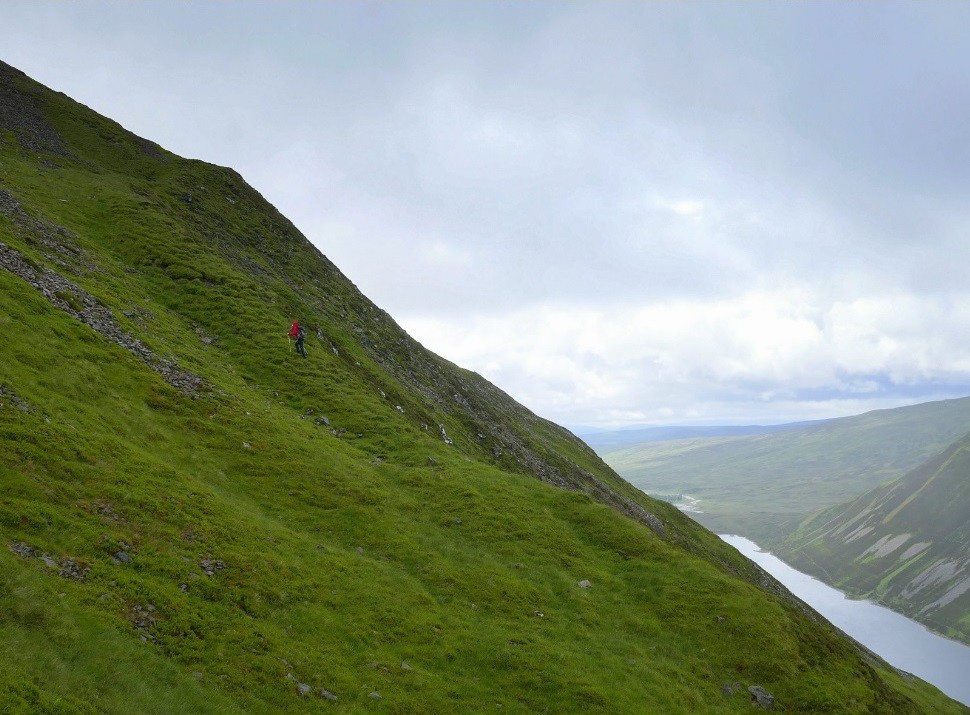 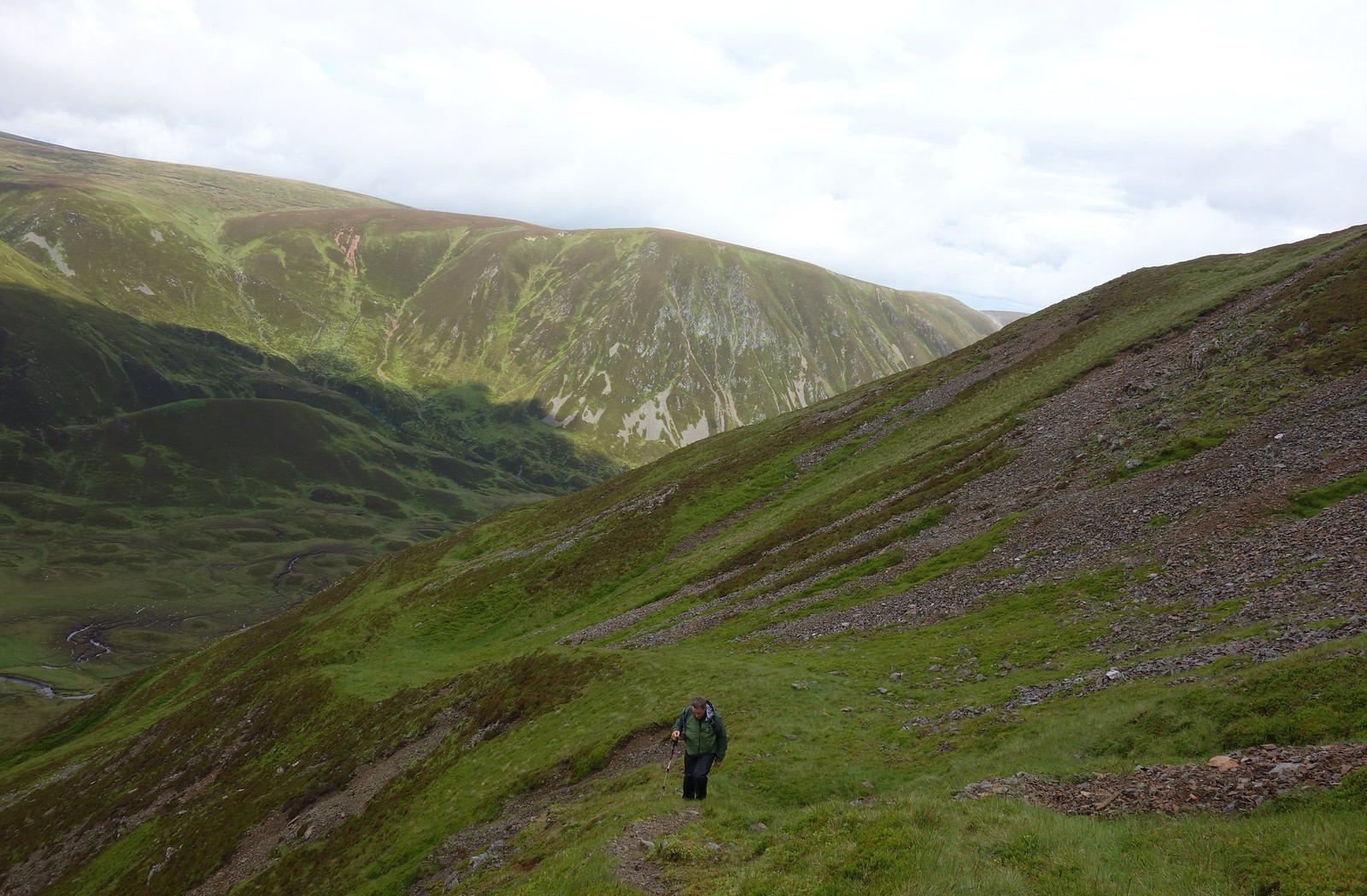 The rain had finally eased! 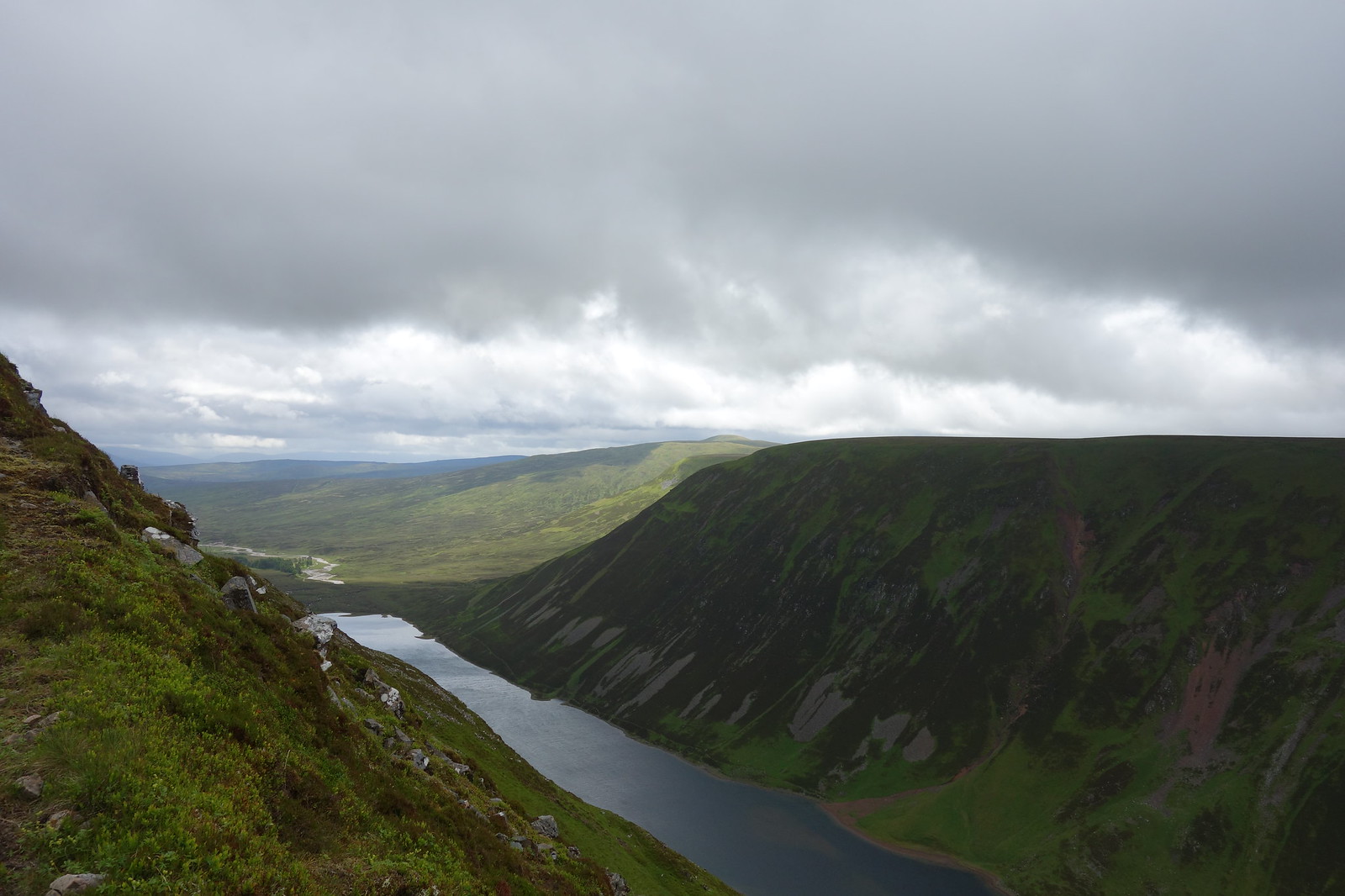 This brought us out on a plateau. We could see the people ahead of us heading towards a large cairn (presumably the summit although it looked lower). There was a wee cairn fairly close so we decided to visit that too, making jokes about Corbett Tops

Are they even a thing?!

As I discovered later, it was a good job we did go there, as it was in fact the real summit despite having a diddly cairn

However, we made our way to the larger cairn for photos. 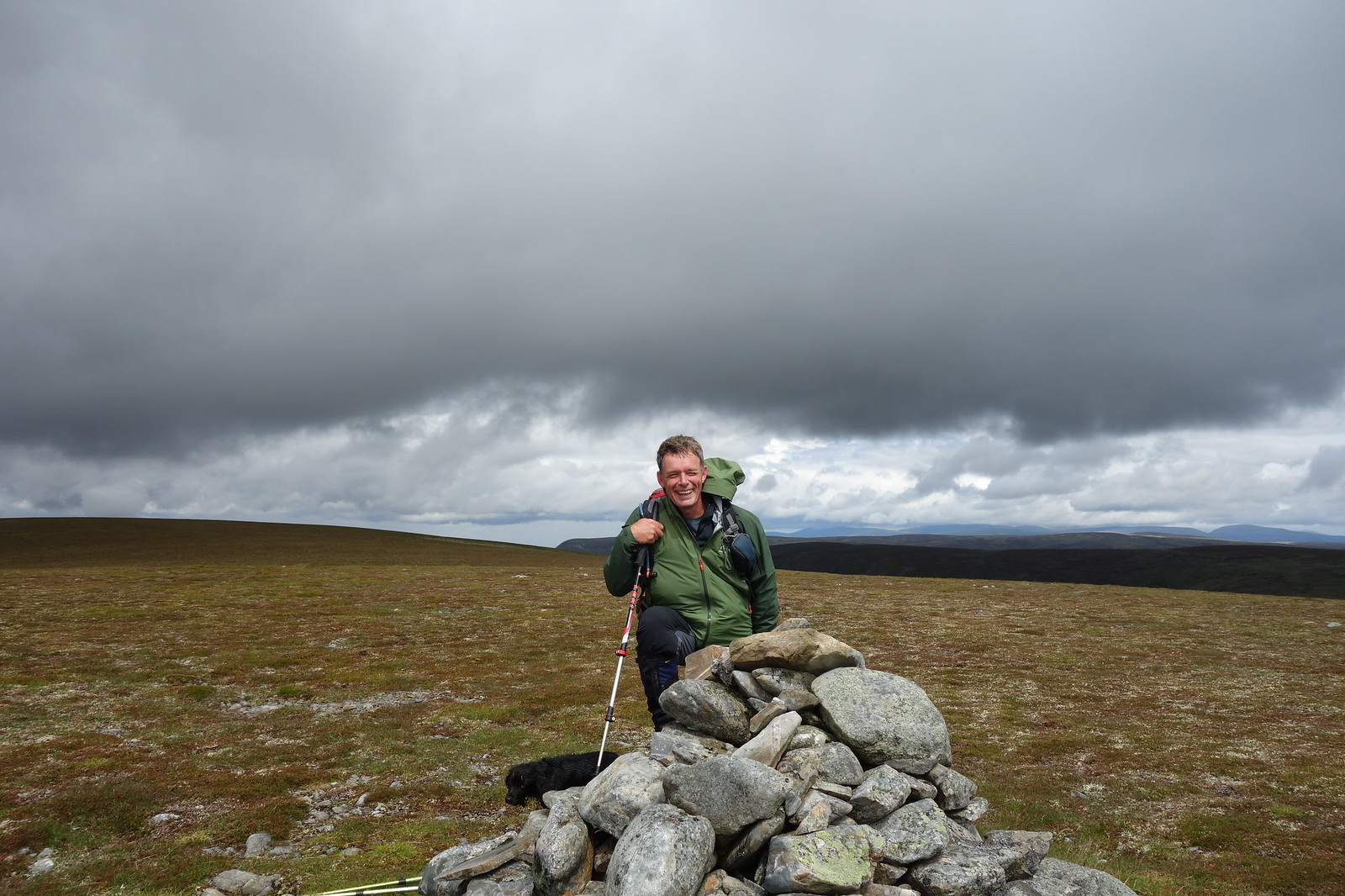 Jaxter being photobombed by Jura 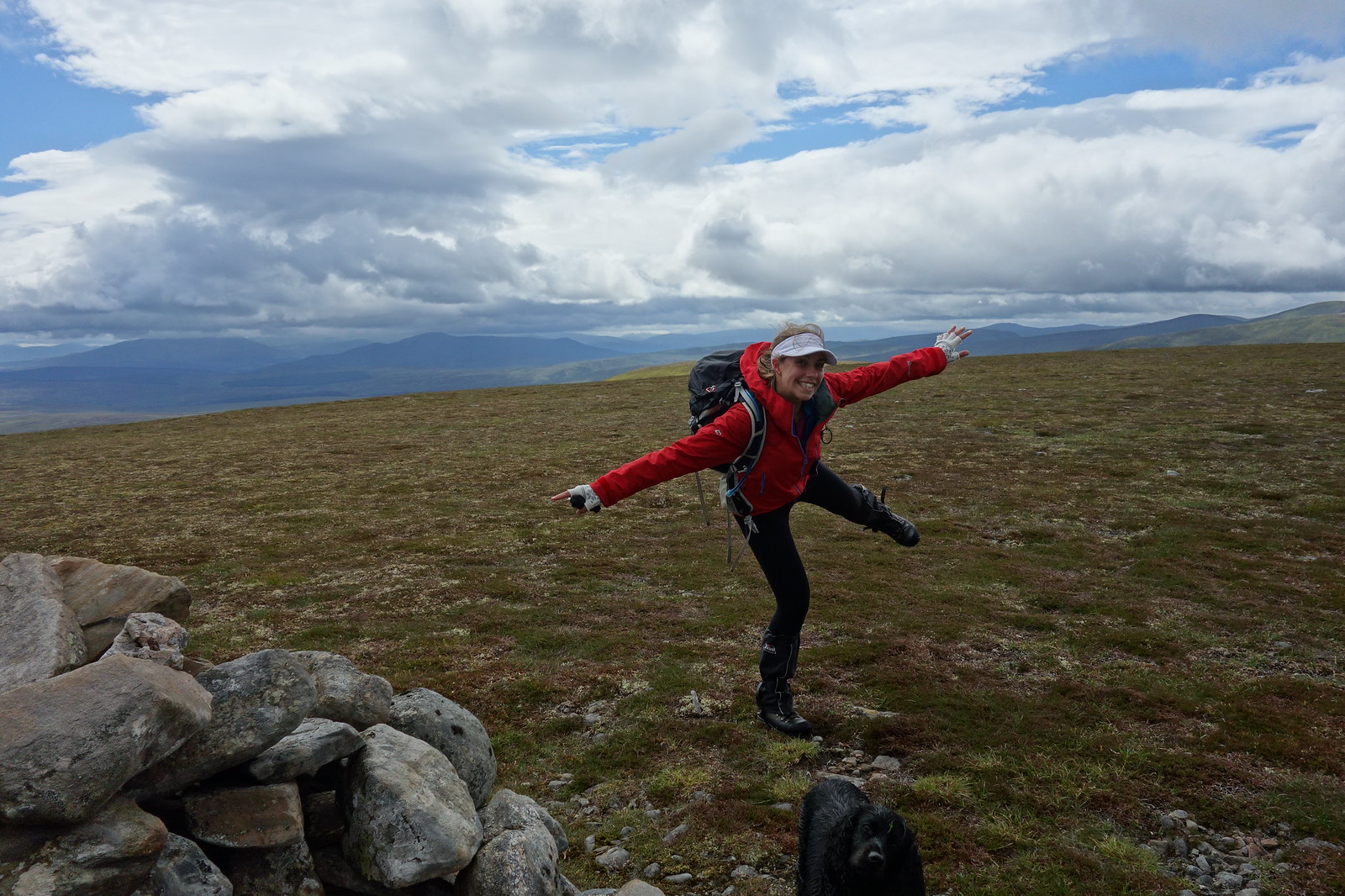 Although the rain had let off for now, it was very windy and we didn’t hang around for too long. The route was easy from here – followed the ridge to the deer fence. 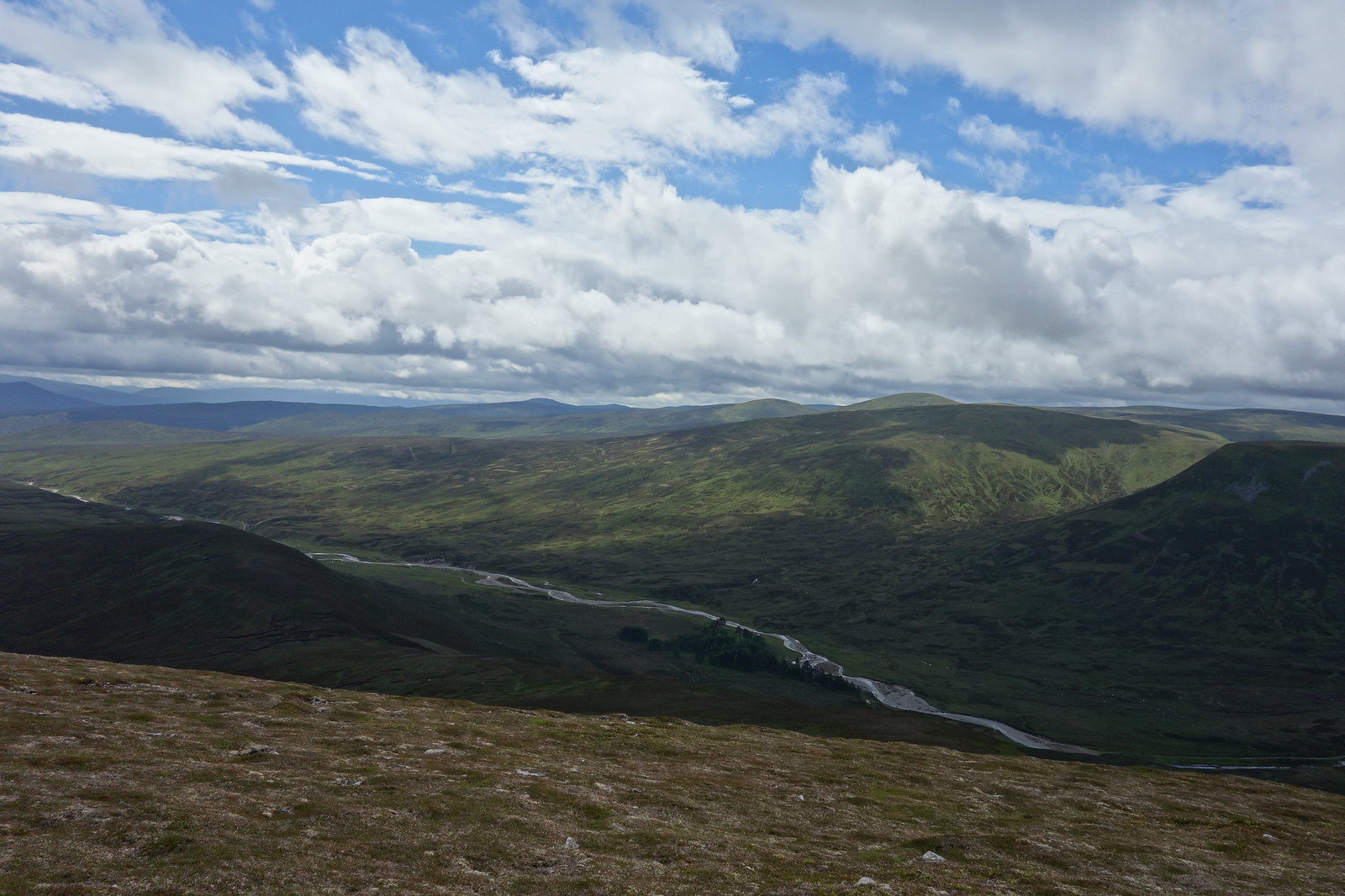 I think those are the Alder Hills in the distance? 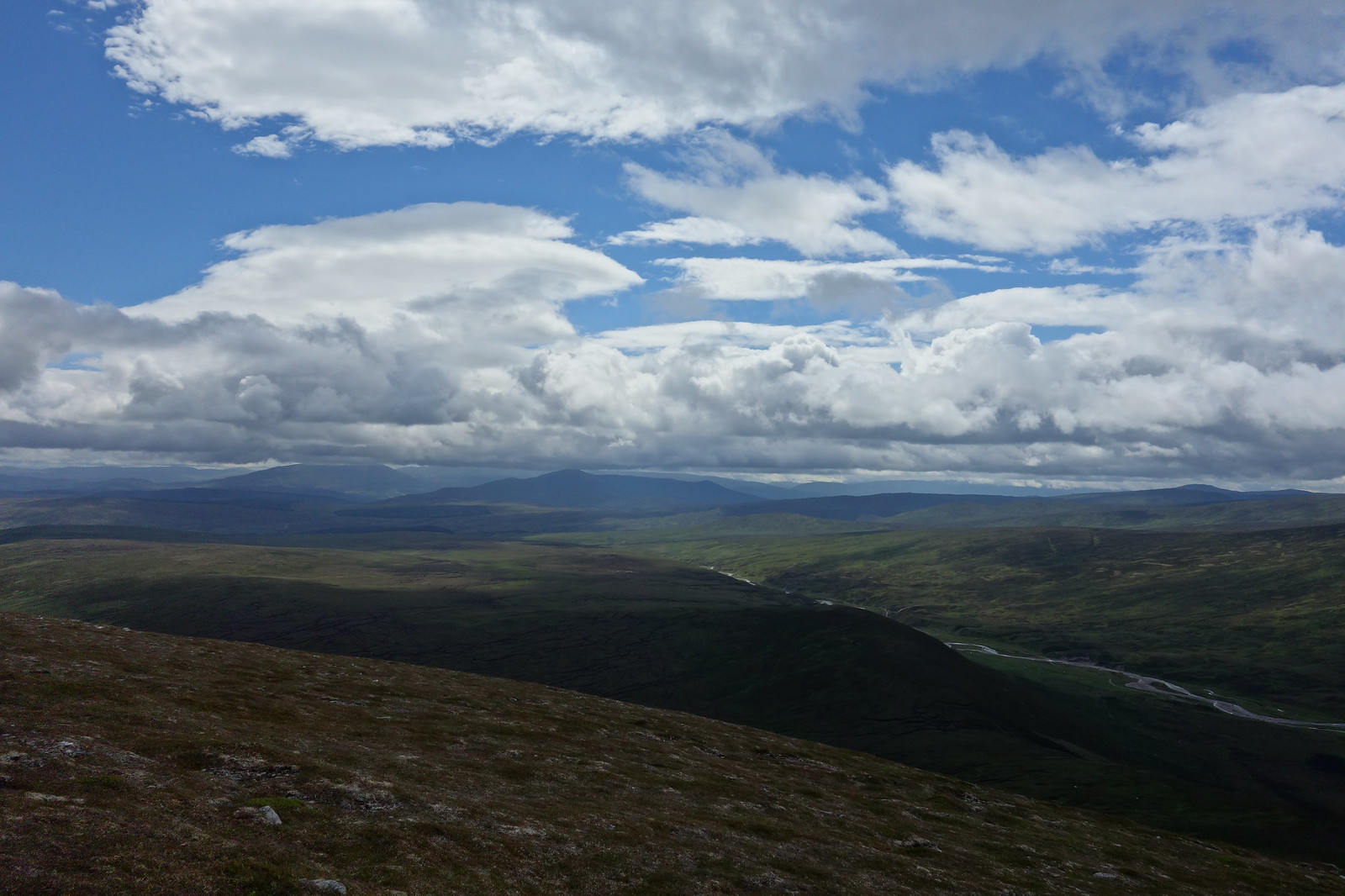 Colin and Jura leading the way 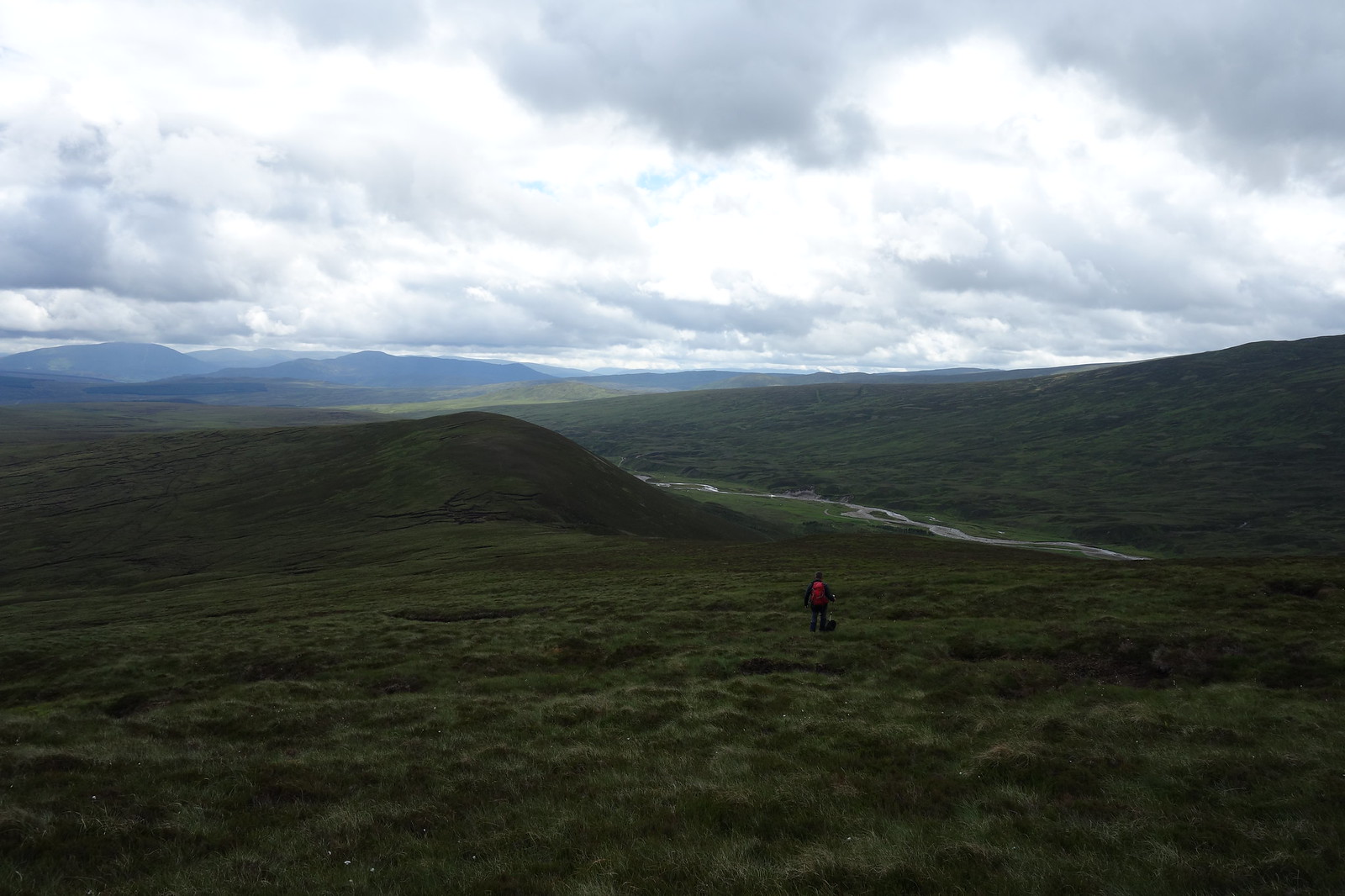 The rain decided to return and leggings were hastily reapplied. We followed the deer fence through a bog and we were back at the bikes – hooray! 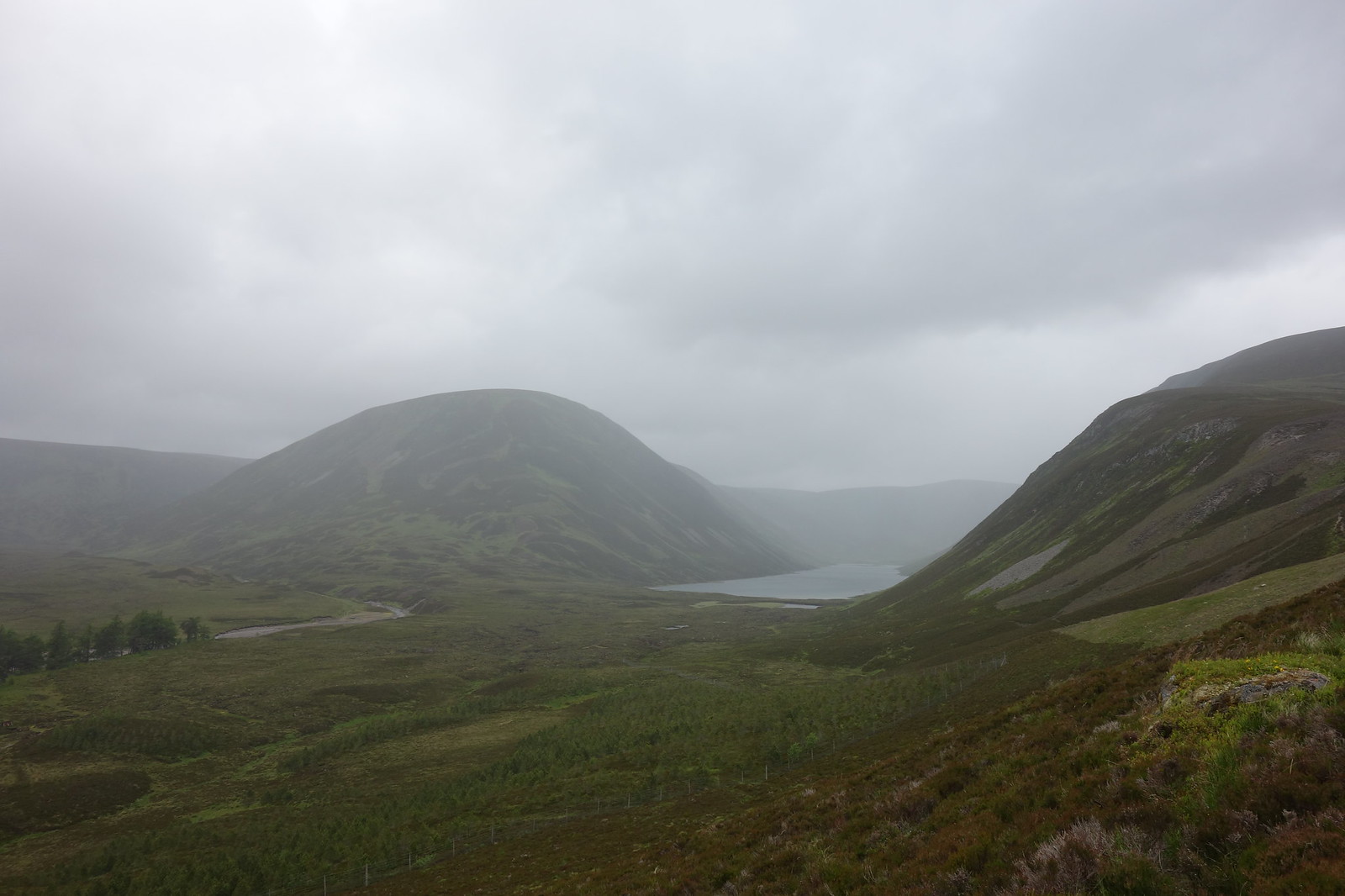 Back on the bikes, we were racing against the weather. We overtook the others who were going to get pretty wet and pelted doon the track. Fortunately Jura seemed tired enough to stay out of the way!

Back at the forest we had just left the weather behind. 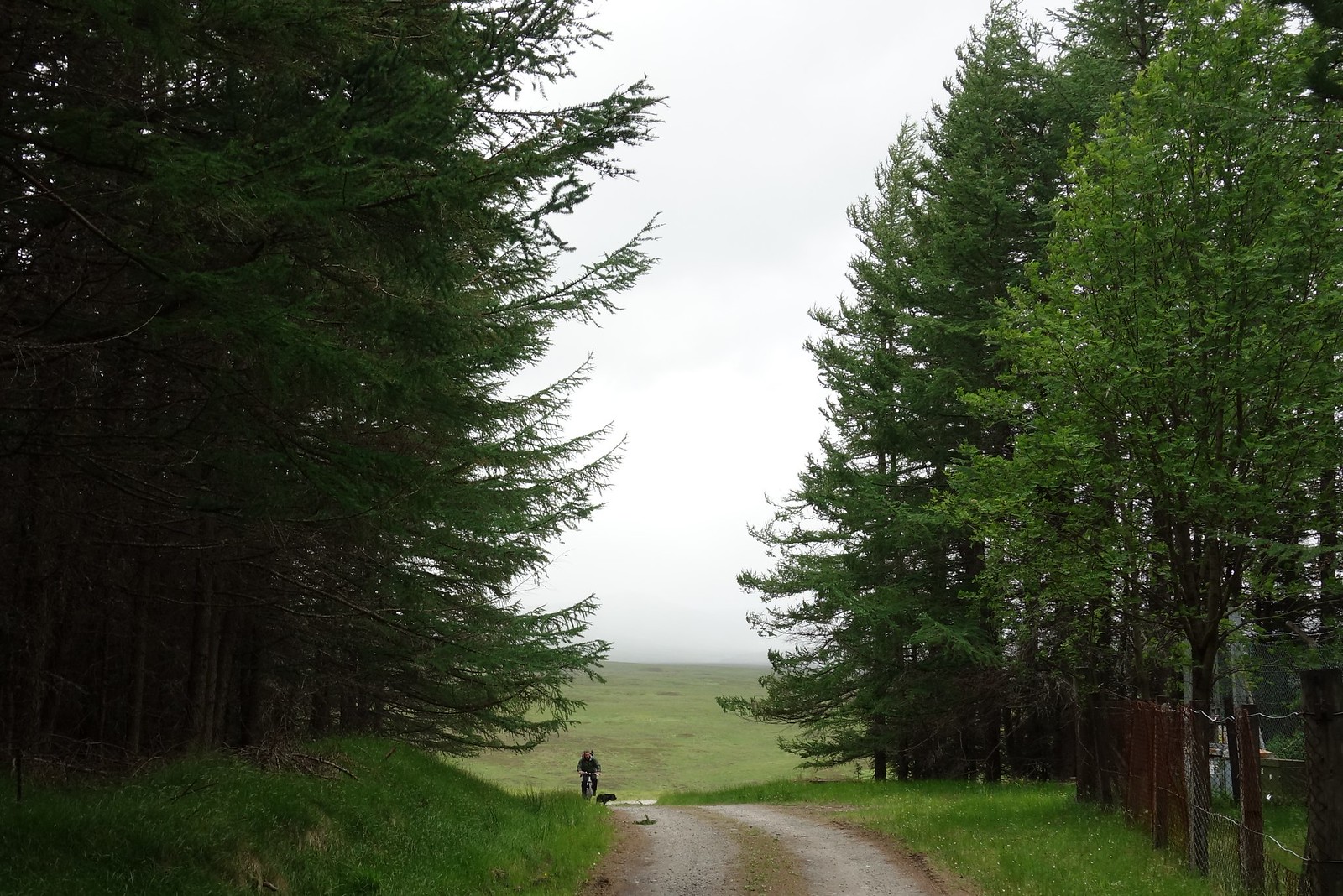 And we arrived back at the car in the dry. Celebrating prematurely, we ditched the waterproofs only for the rain to start and we got pretty wet putting the bikes on the car (especially Colin because he’s a gentleman

Thanks again to Colin for the excellent company

An Dun Maol Creag an Loch.gpx Open full screen  NB: Walkhighlands is not responsible for the accuracy of gpx files in users posts

Interested to see this, as I've come across that steep-sided pass whilst wandering around the area...virtually, on a map...and wondered what it looked like in the flesh. Now I know!

Not as obscure as you think, we did them three days before you

but didn't use bikes, though I must admit this track is asking for cycling.

According to Graham Guide, the second (northern) cairn on An Dun is the true summit, not that it makes much difference when traversing the hill. We descended the other side of that wee gully, which looked a bit less steep from above but was probably just as bad...

I'm still behind with my TR's and have another one to post before writing about the An Dun walk, but here is a little panorama of Loch an Dun:

I'm sure that Gaick pass is haunted. On the walk in and out I swear I heard voices when I did these two, but not a soul about or seen all day.

Obscure? It seems like most of Walkhighlands were up there in June, as I walked these pair on the 17th.

Being a bit ... different ... I did them on foot, but over from Drumochter Pass combined with the Munros in that direction. Which doesn't actually add much distance, but involves a fair bit more height and gave me a bit of navigation practice as well as a hare-raising encounter.

I also used that little grass rake / ridge / gulley / feature, in my case to descend Maol Creag an Loch, which I knew by its alias of A' Chaoirnich. I tend to end up doing a lot of steep, often-heathery descents. But I nearly needed to use some extra "points of contact" (my back end) to cope with some of that ridiculous slope.

And, like BlackPanther, my walk report is stuck in a queue to do

and I see some of my photos fitted in just fine too. I hope yer buns are feeling a bit better now, if I had known you had such a rickety auld bike and such a bonny/boney erse

Was recently, 25th May, up Creag an Loch but went up from Dalnamein where if you go down to the water you can get a picture of 3 bridges. The route takes you up through the ruins of Glas Choire Lodge. Where the track splits just after this take the left hand one down past the dam where SSE are currently having a fish ladder installed. The track on the 1:25,000 map is shown as stopping at about 680m but in fact carries on over Pt 793 and past Pt 753 to the end of the plateau. From there I ascended North to just past Pt 840 before descending West to the col at Pt 752. From there I could see my goal for the day, the remains of Loch Trieg Bothy at NN76097935. This is the remains of an old Watchers Bothy. These were bothies, normally situated at the head of corries, where old stalkers were put to keep deer on and poachers off the estate. This bothy is called Loch Trieg because one of its residents once walked over to Loch Trieg to retrieve some wandering sheep - or so the story goes. There was a small pool situated beside the bothy remains which was absolutely teeming with tadpoles. From there it was just a short walk up the hill to the summit at Pt 875. For the return I headed South to the nose of An Sligearnach and then descended South East to the confluence of the Allt na Sligearnaich and the Allt Glas Choire to the remains of the Red Bothy where I disturbed a deer cooling down in the burn. From there it is about 1 km over rough tussocky ground to gain the track back out passing the remains of Summer sheilings. There are the remains of other watchers bothies on the Atholl Estates if anyones interested.