Seana Bhraigh - beauty of the north via the easy way

Seana Bhraigh - beauty of the north via the easy way


Seana Bhraigh tucked far into the north of Scotland is by far not an easy mountain to reach. Or so I thought until I was told that a much easier and prettier approach from Oykel Bridge is possible.

I had arranged to meet Col at the caravan park in Dingwall and after a rather rainy night at the campsite, I woke up to glorious sunshine. Getting ready we put the tents away and agreed that as pretty the birds might sound in the morning, it had been a nightmare listening to them from 3am onward.

It was 9:00 am when we made our way to Oykel Bridge. The drive itself was rather stunning and I enjoyed to see yet again roads less traveled. 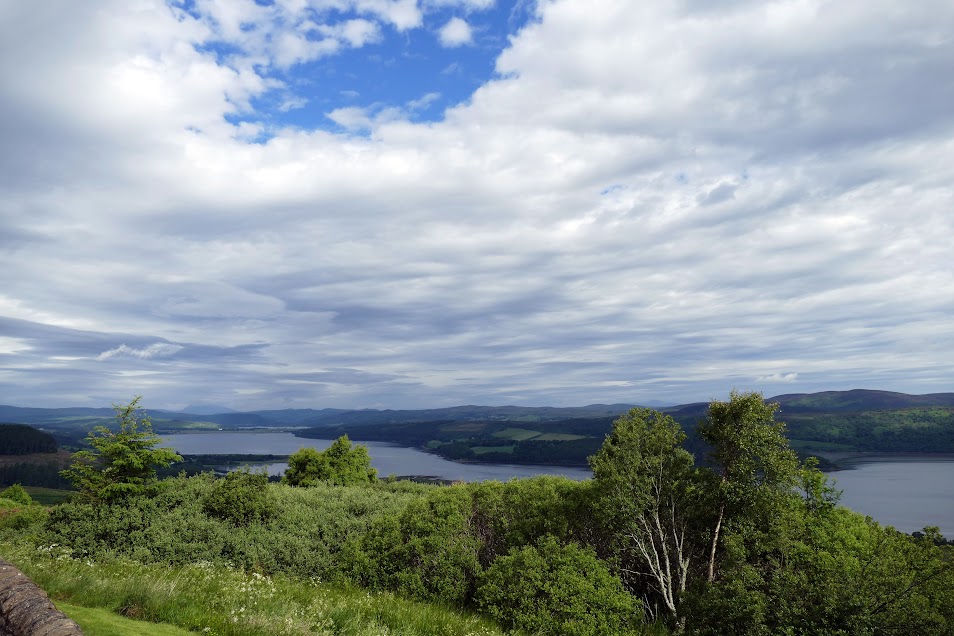 When we reached Oykel Bridge the start of the landrover track was easy to spot. I took the lead with my car and I am not sure what I had expected, but it was certainly a smoother ride that the one we had to endure for the next half an hour.

I have walked my fair share on land rover tracks and wished so many times that I could drive them, but driving in reality was a crawl at 15 mph with constant thoughts of OMG I hope my wee car will survive the journey. The bumpy journey can begin 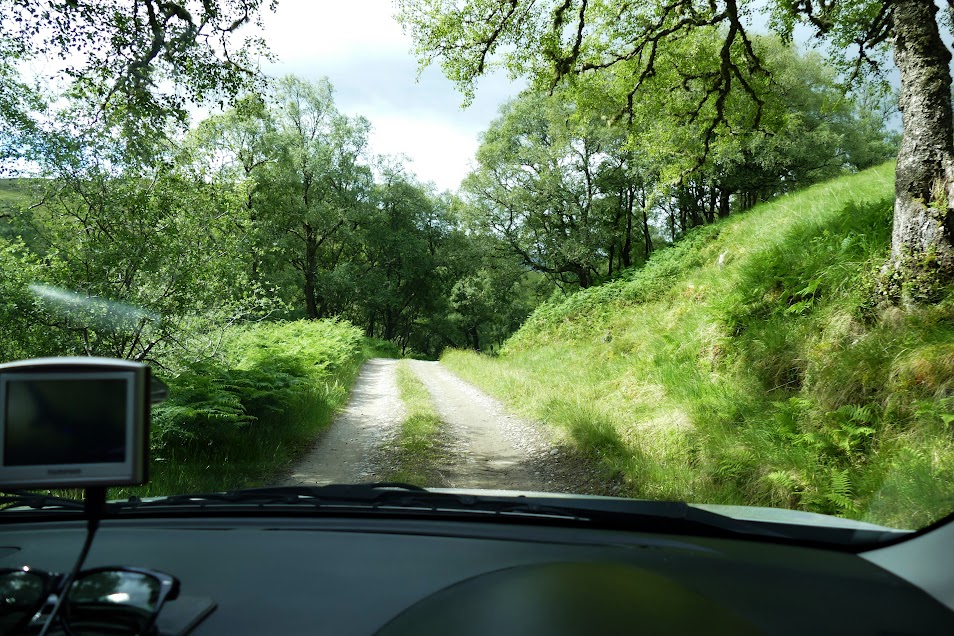 When we finally reached the well sign posted car park I was revealed and surprised that we were the only ones there.
We passed the lodge and buildings and continued through a gate. Ahead of us Seana Bhraigh showed it self in all its beauty and the path simply continued towards it. Passing hundred of Sundew and Foxgloves on the way , summer was in full swing and the wind kept the midges at bay. I lost count how many wee burns we had to cross, but well placed stepping stones made it easy and we managed to keep our boots dry. 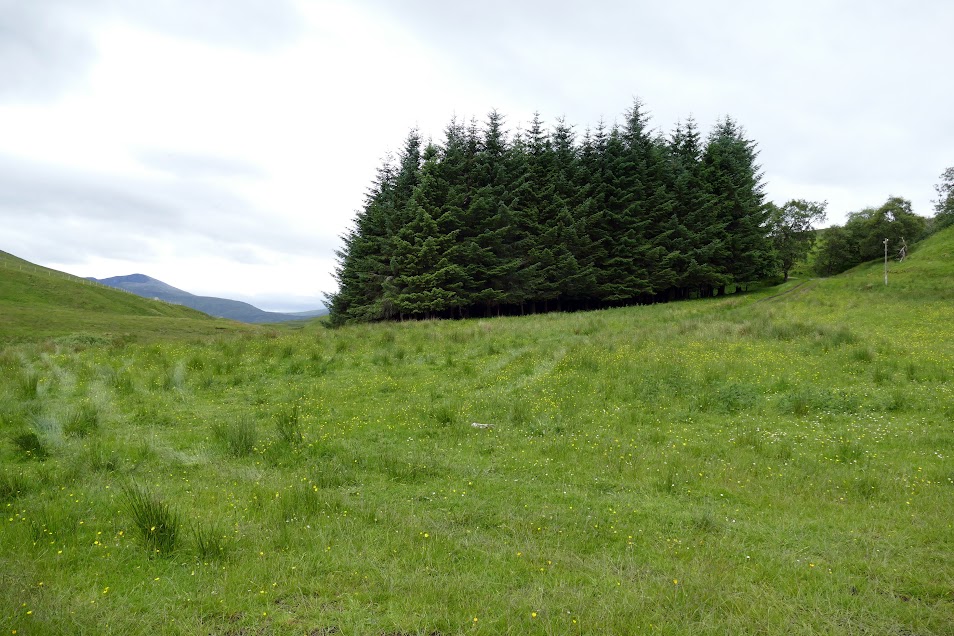 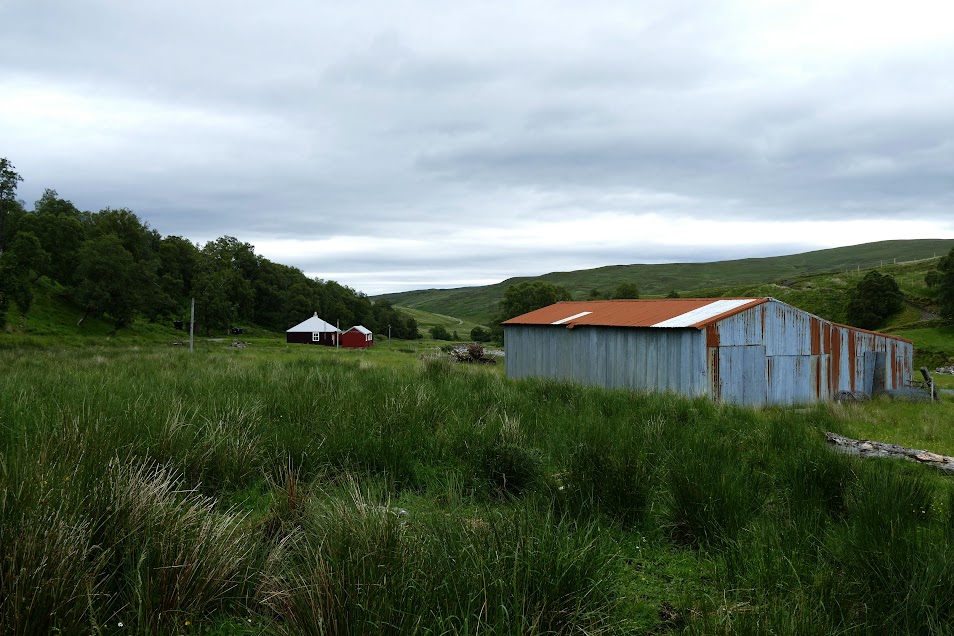 Looking back towards the buildings 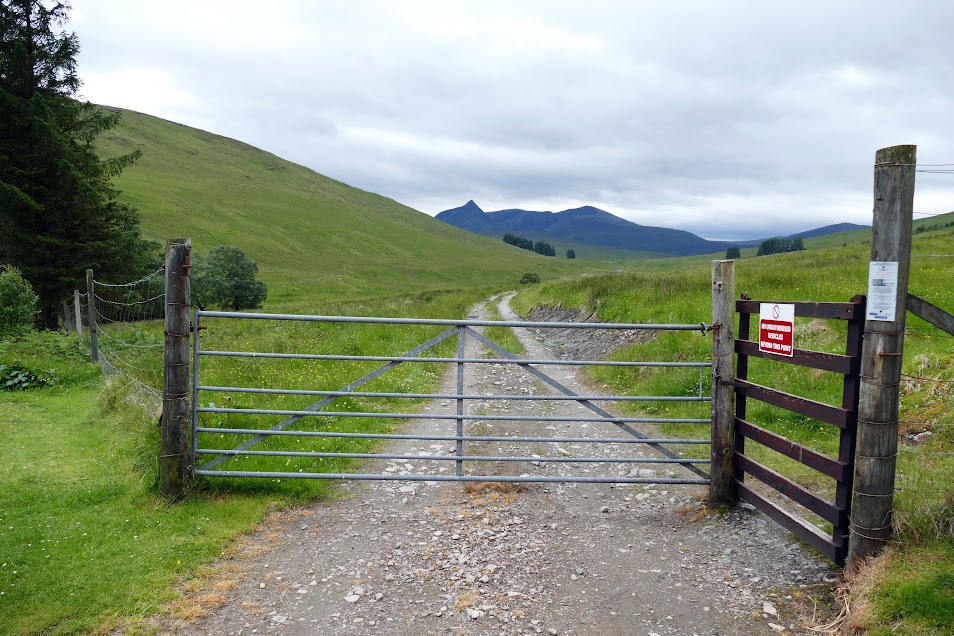 The clear path ahead 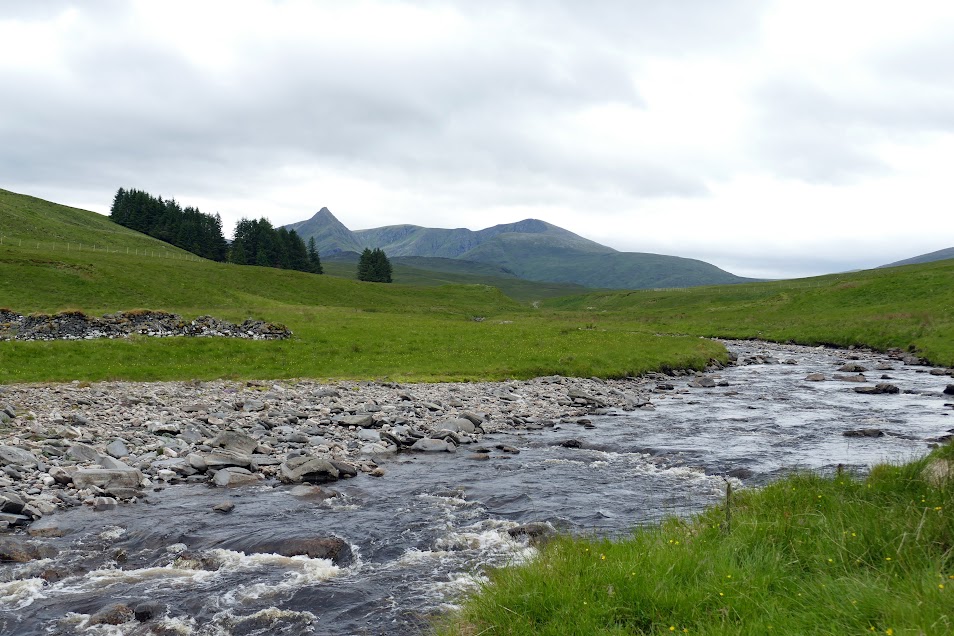 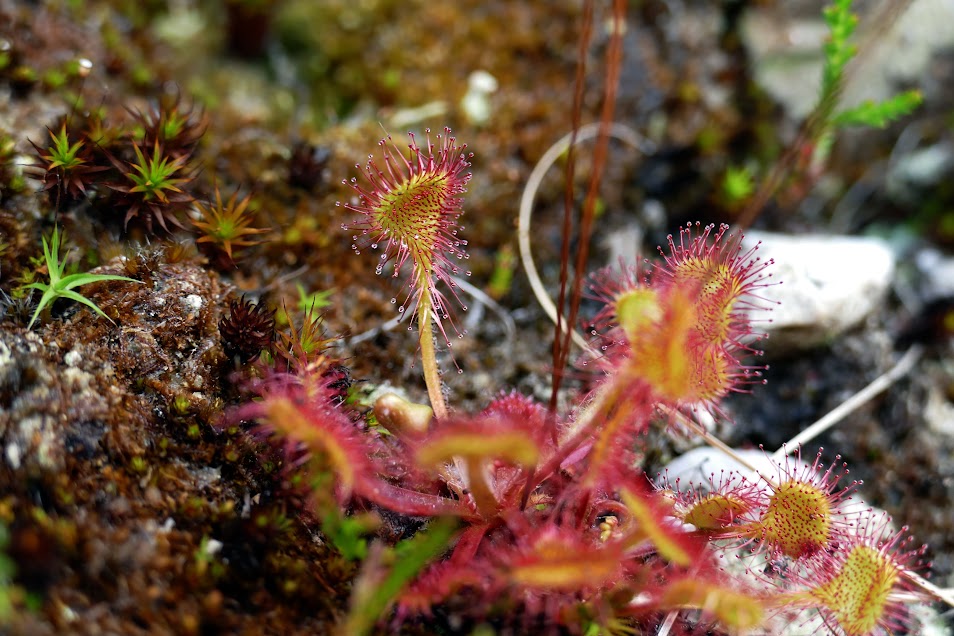 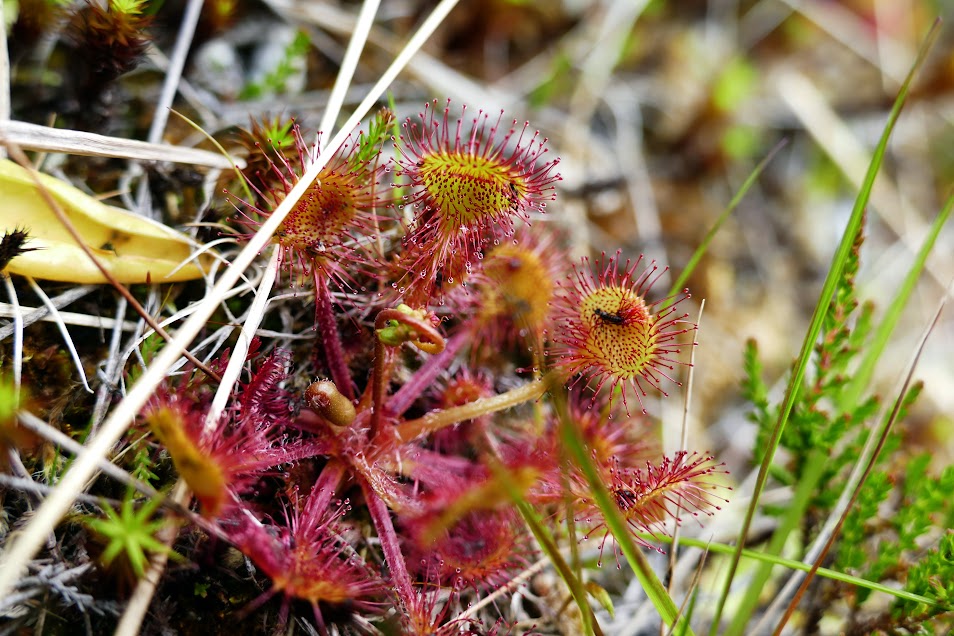 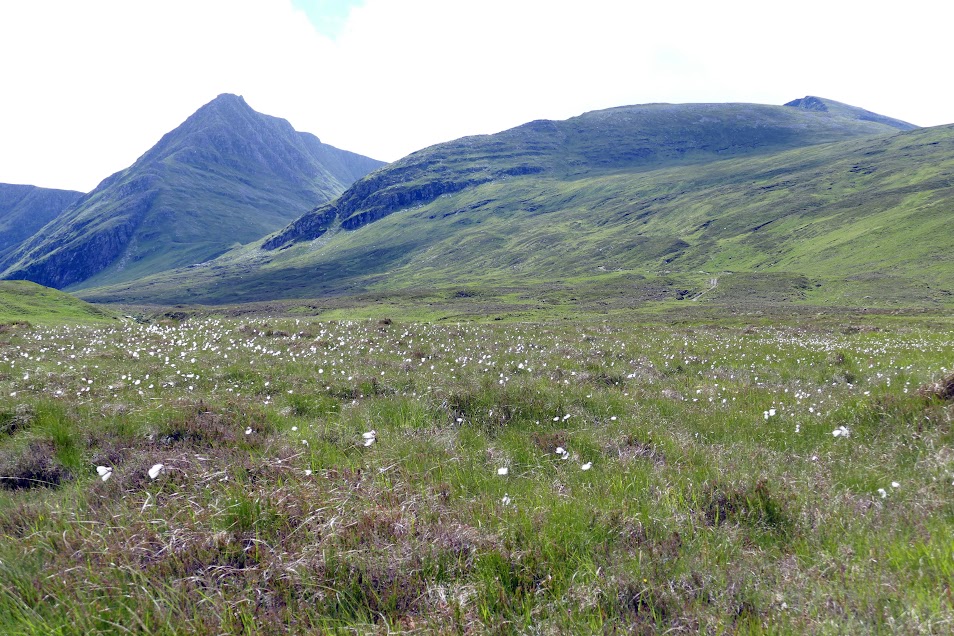 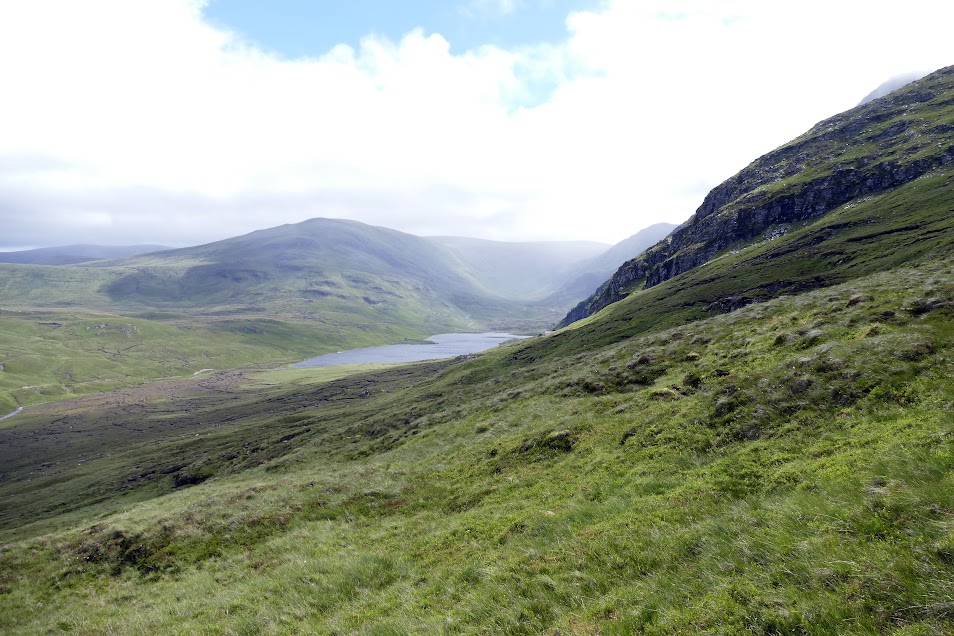 Once we reached the foot of the mountain we had a short break to enjoy the countryside and have something to eat. In the distance I could see a path which lead up towards Meallan Odhar.

Once we left the main path the ground was grassy and soggy in places, but all in all not too bad. The higher we climbed the stronger the wind got and by the time we reached Creag nan Gobhar +40mph made the walk quite interesting in places. 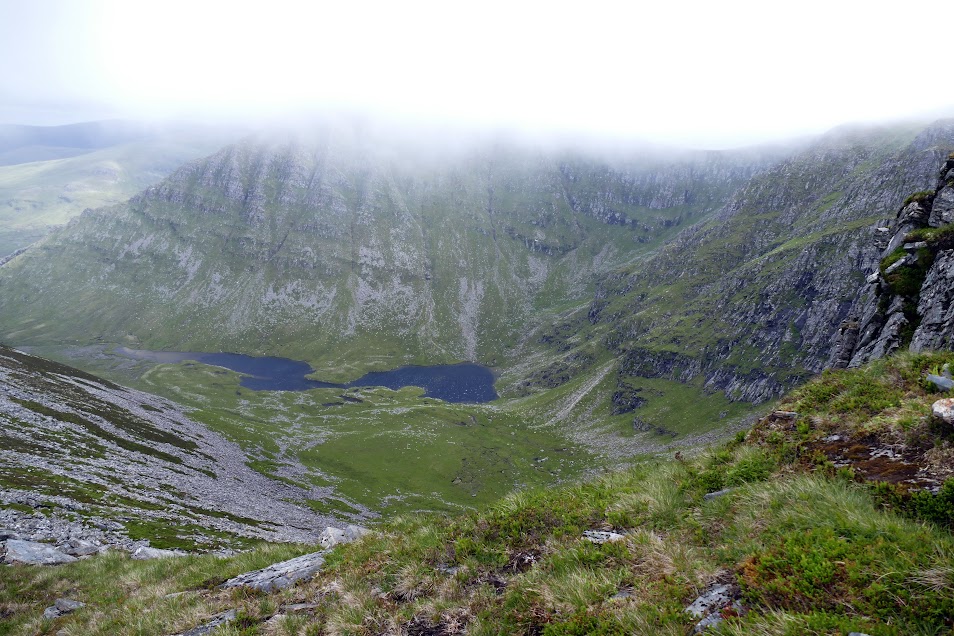 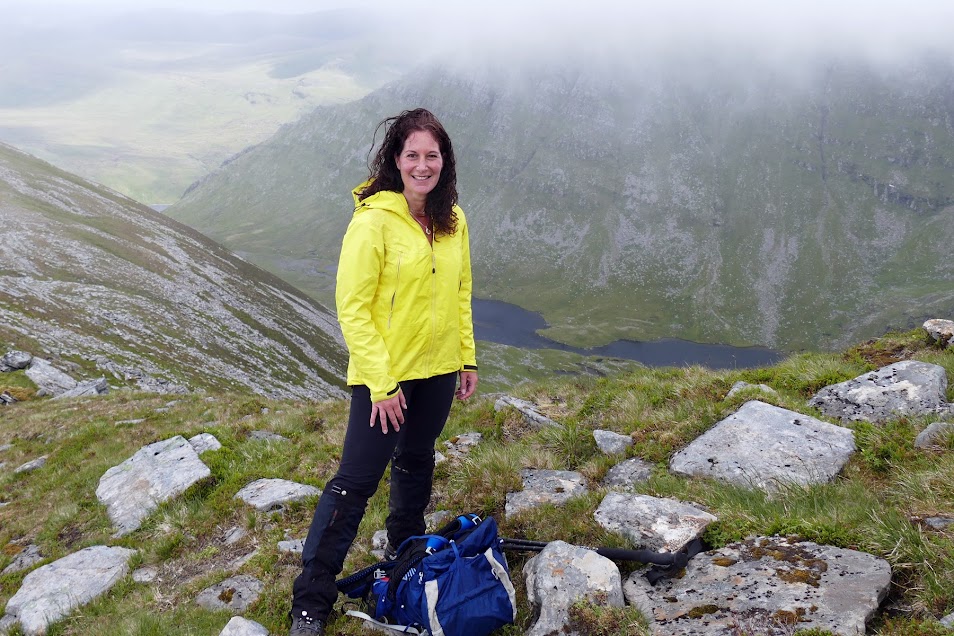 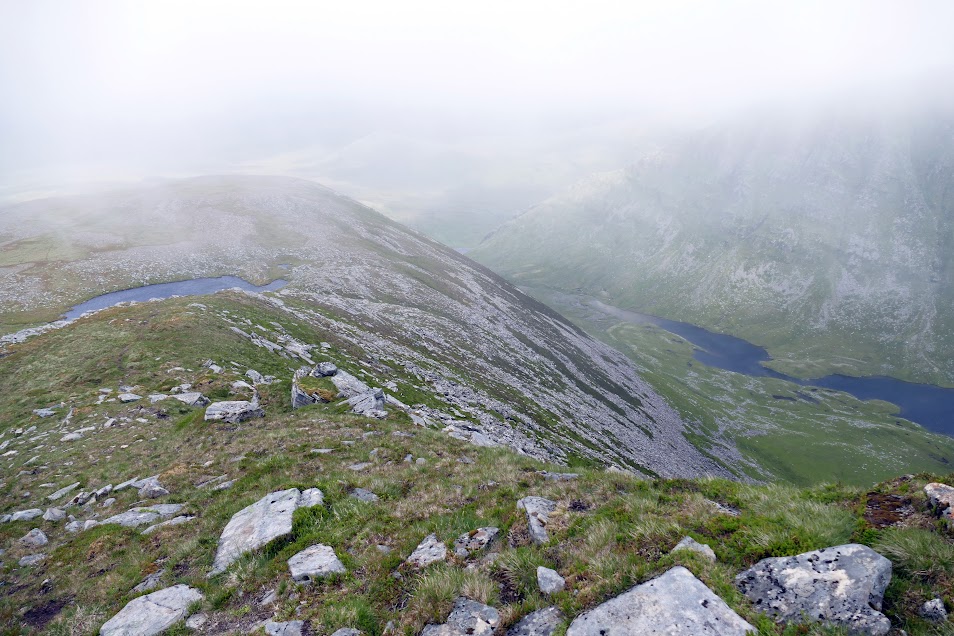 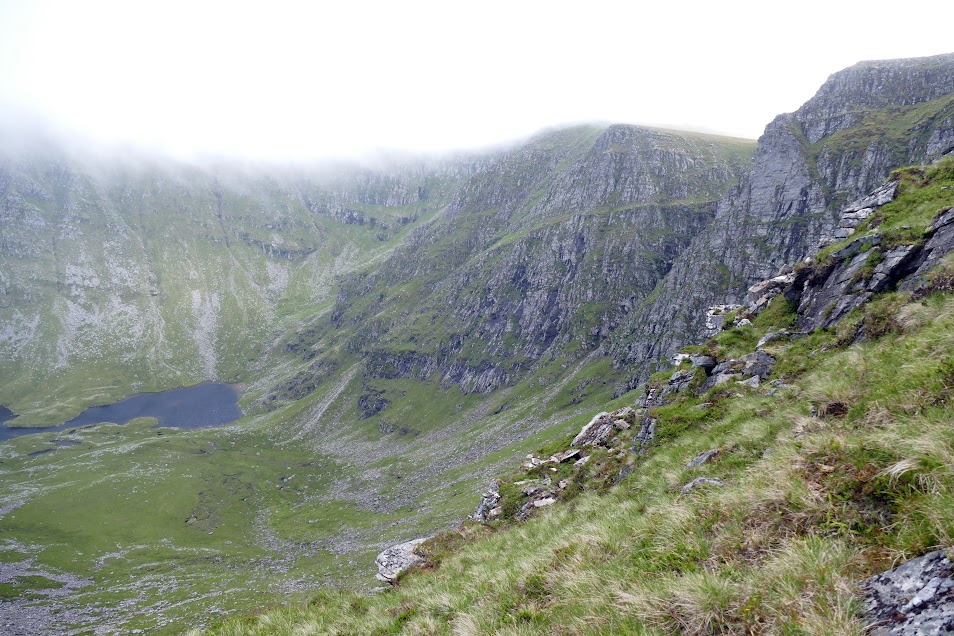 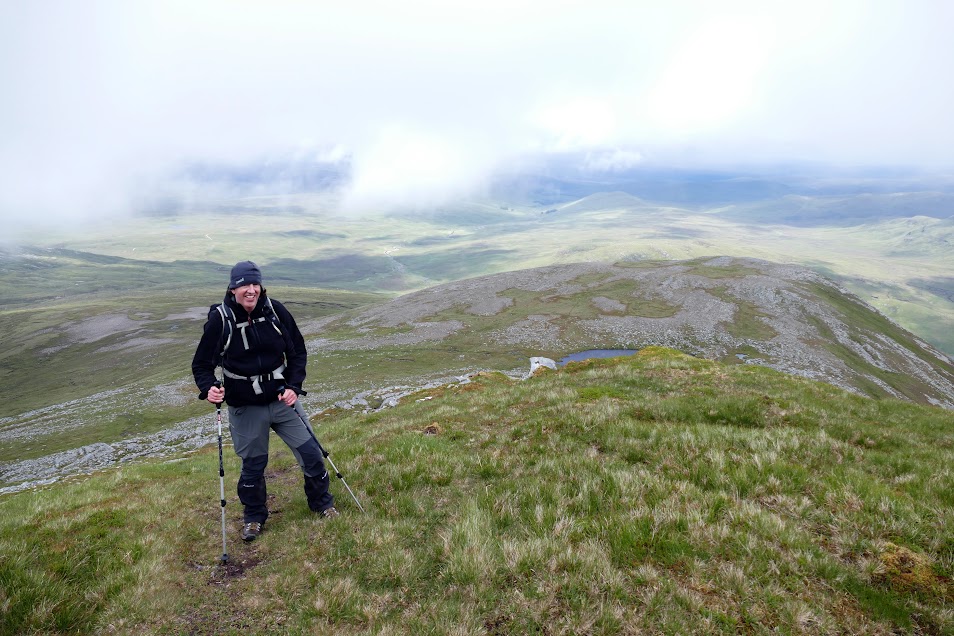 The views however were simply amazing. I have seen pictures down the wee Loch Luchd Choire, but to see in real was simply outstanding. With lots of breaks to enjoy the views, we finally reached the large cairn. Waking around the views were even more spectacular and the clouds raced above us, giving some added drama. We seeked shelter when a rain shower passed and I was soon in 3 layers. So much for a warm summer. 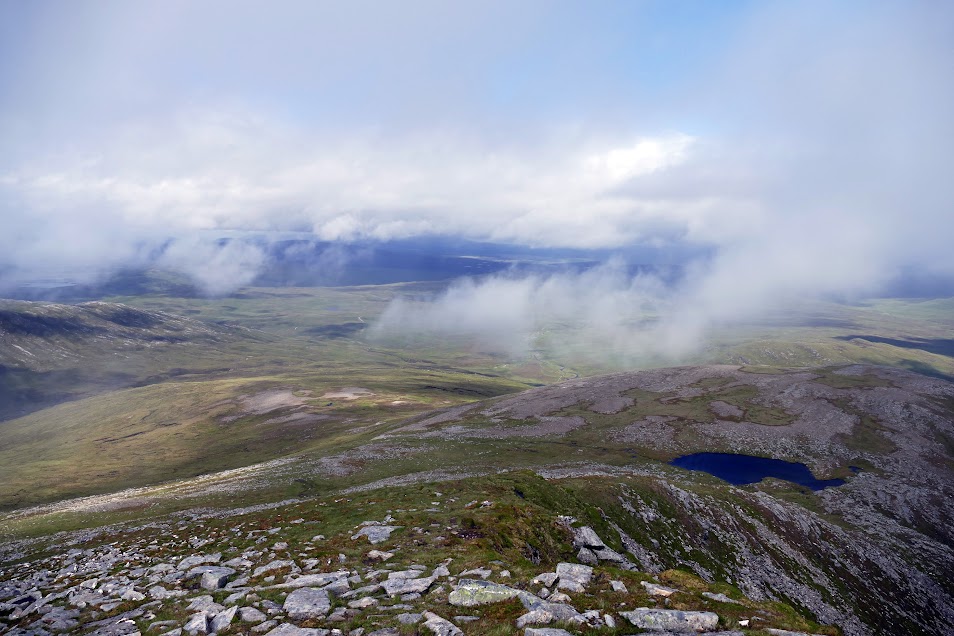 Views on the way up 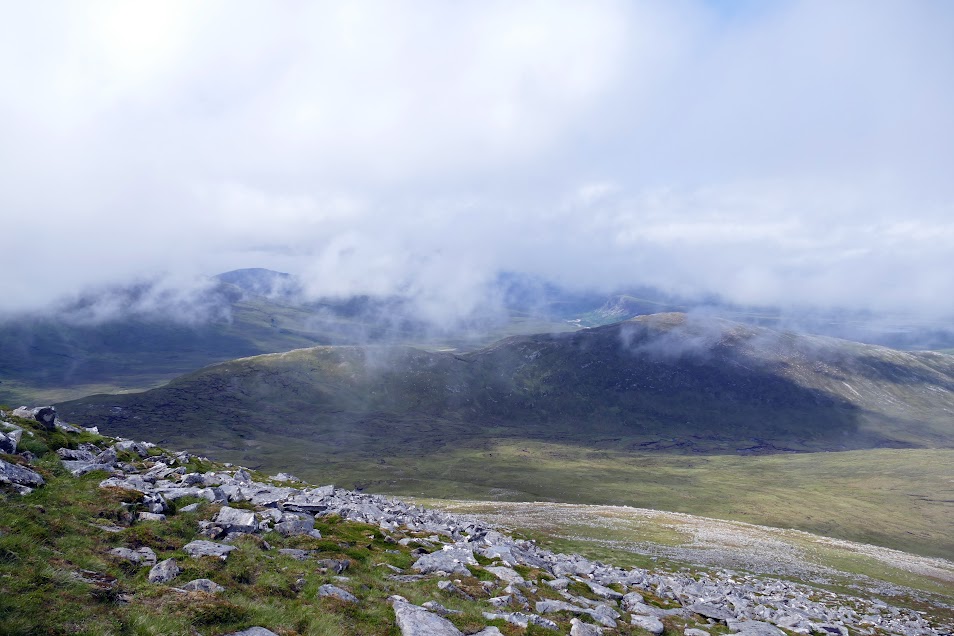 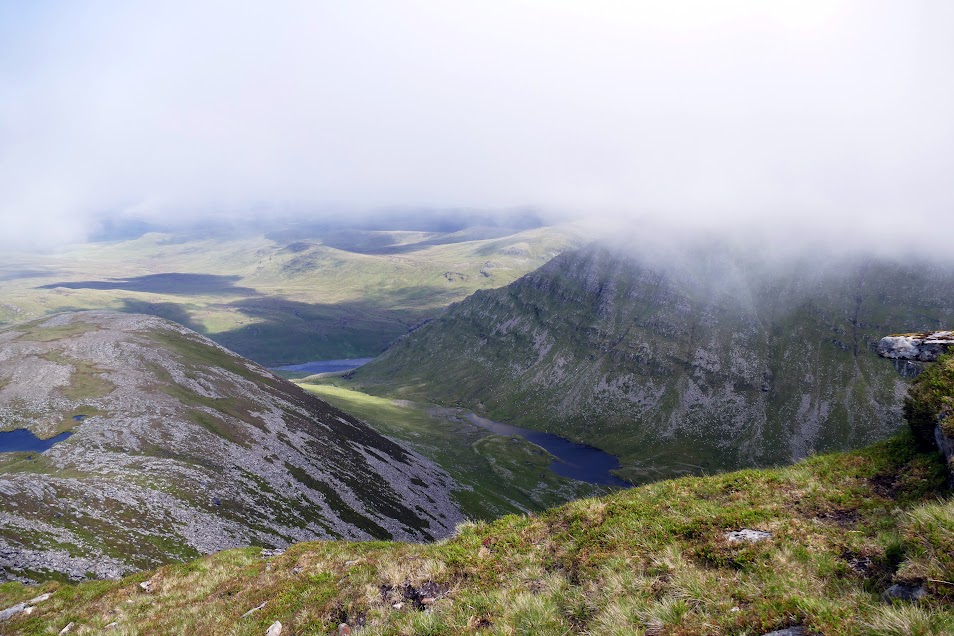 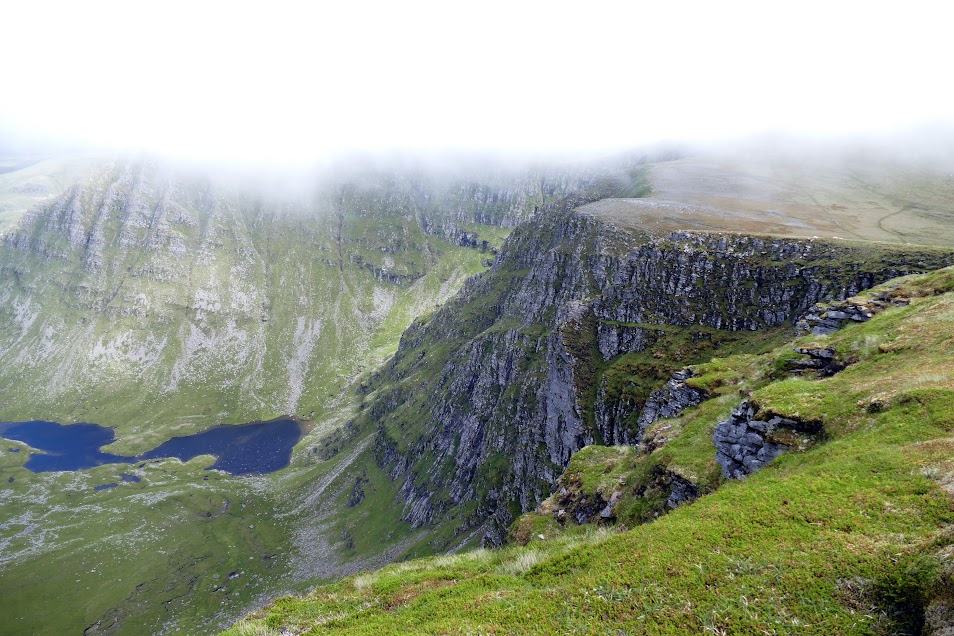 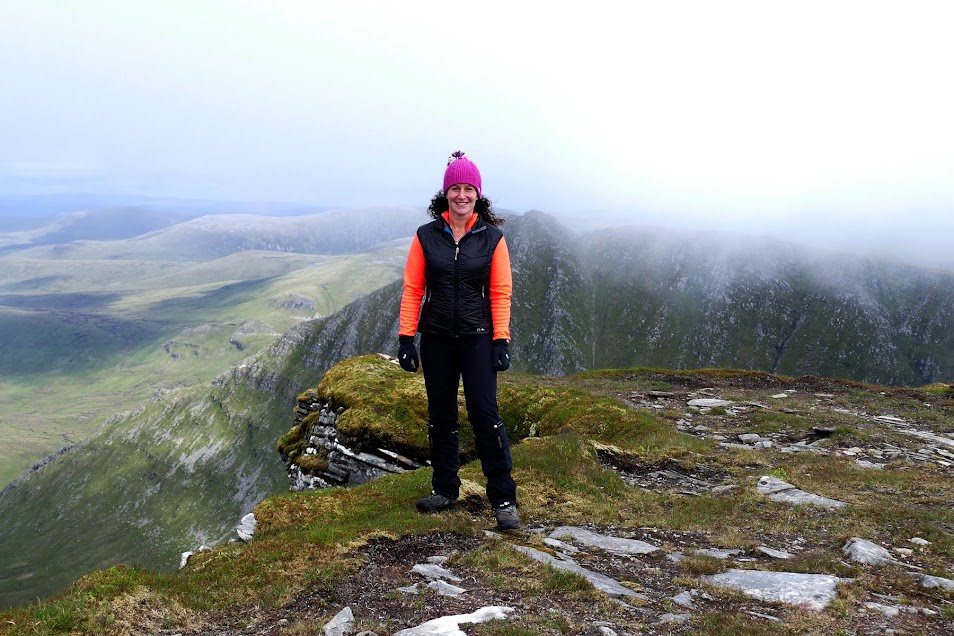 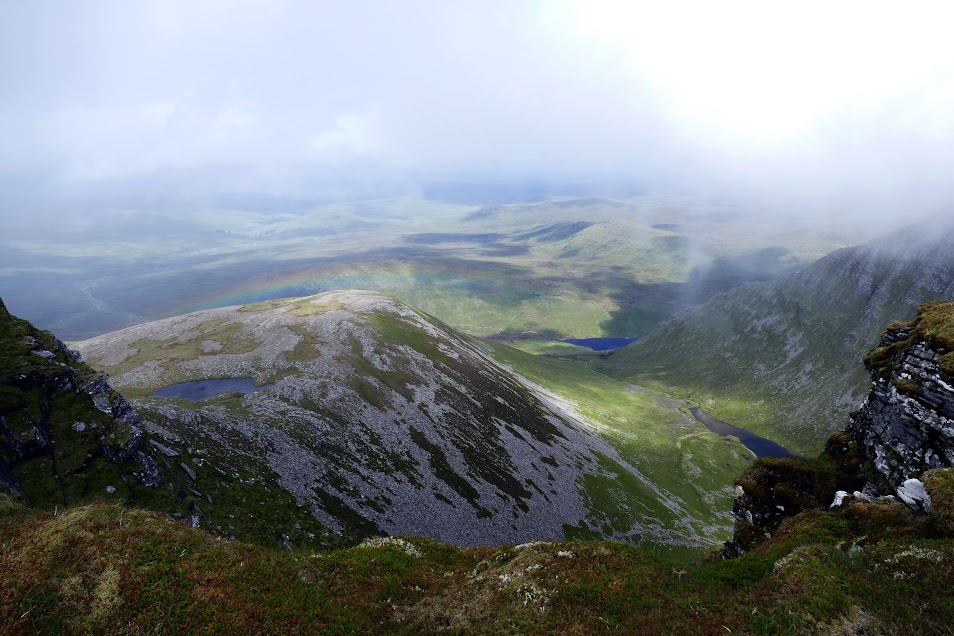 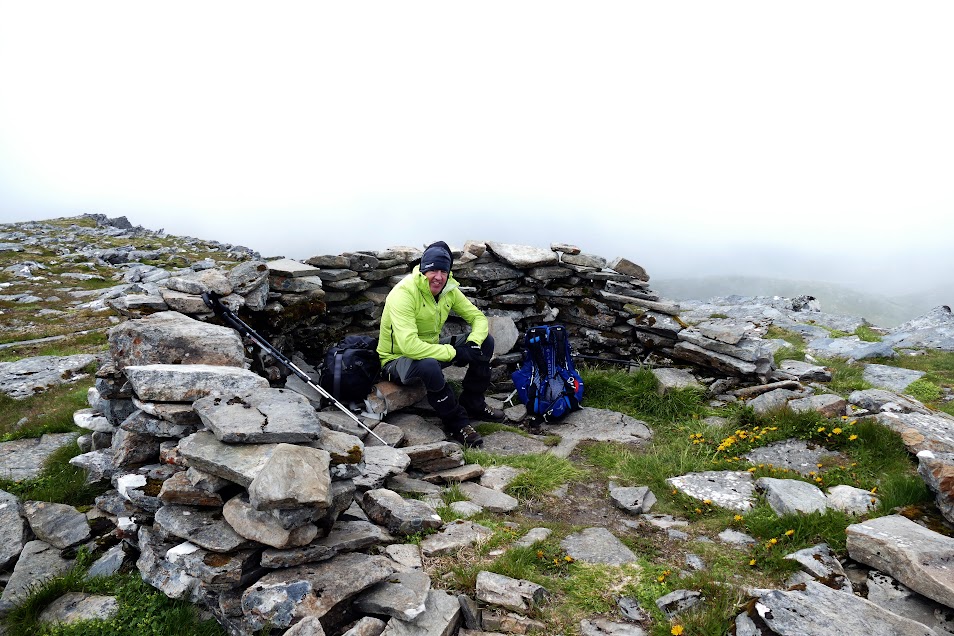 Seeking shelter from the wind A lengthy lunch break later, we decided to skip the plans to do the horseshoe and simply returned the way we came. Rain showers and rainbows followed us back to the car and Seana Bhreigh...I will be back at some point!

The Landrover track to the official car park - 10k/6 miles

Re: Seana Bhraigh - beauty of the north via the easy way

What a dramatic corrie. As I recall there is definitely a need to keep the speed down on that road because of the occasional pothole. Unless you drive a tank of course!

Re: Seana Bhraigh - beauty of the north via the easy way

Spectacular way to walk this mountain, glad you got the views especially into the corrie