For this year's week of Munro holidays, I chose Braemar as my base. I had not been to this part of Scotland before, and the Cairngorms offered a big choice of Munros to climb, so I was looking forward very much to discovering the area.

Like last year, the weather forecast was not really good before I left for the airport, with rain forecast for much of the week. By the time I had arrived on Sunday afternoon, this had already improved, with rain to be expected for Monday afternoon, and dry the following days.

When I woke up on Monday morning, it already looked very much like rain. Not yet being familiar with the area, I did not know which hills to walk first. Finally, I decided to drive where the weather looked best at the moment, and so the decision fell on the Carn Bhac / Beinn Iutharn Mhor walk. The long low-level section on a good track through Glen Ey was another bonus in case I would be caught in the rain.

When I arrived at the car park at Inverey, a group of three was just preparing to leave for Carn Bhac. They had a bit of a head start, and I did not catch up with them until the bridge at Auchelie, where they stopped to consult the map. Their plan was to fork off here and follow the track up Carn Creagach, while I continued on through Glen Ey.

I had the empty glen all for myself now, enjoying the walk in the still cool air - but there was definitely a feeling of spring, with the young leaves of tender green on the rare trees near the river Ey and the songs of a few chaffinches.
This soon gave way to a great feeling of space and solitude, especially where the track crossed the Ey burn on a bridge right where the valley bent from south-east to south-west. 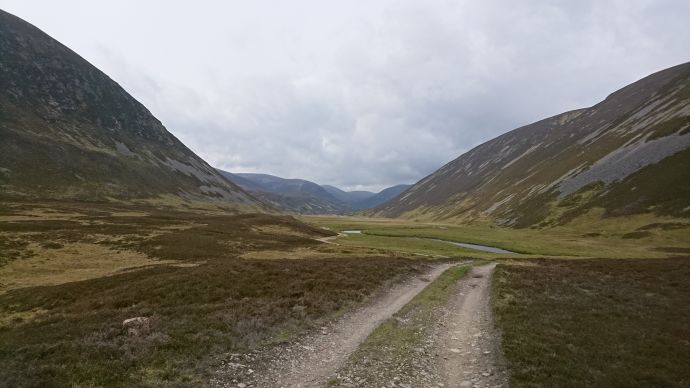 The sense of remoteness was a bit spoiled by a man in a pick-up truck driving out the valley, but he should be the last person I saw for the rest of the day.
As I approached the fenced-in ruins of Altanour lodge and its copse, rain began to fall - much earlier than forecast, as it was just around noon.
Two lonely bikes were lying in the grass, left behind by someone using the opportunity of the good track to shorten the 1:45h walk-in.

The clouds now descended quite low, and I could not aim for any features in the hills. The track had ended at Altanour, so I followed the little wet path for a while before forking off to the right up the flank of Carn Creagach.

After some climbing over rough grassy ground, the rain and wind had grown considerably stronger. It now was very chilly, and when I noticed I had gone too far to the right and was actually climbing Carn Creagach instead of heading for Carn Bhac, I was on the verge of turning around and packing it in.
After some shaking of my fists at the clouds, the rain, the wind and my blind walking on, I decided to at least go up Carn Bhac. It was not far now, and I could then still walk back the way the other group had wanted to go up.

On the way up, I saw my first Scottish mountain hares - from below and with the clouds blurring all sense of proportion, they looked huge and massive, more like kangaroos than hares.

Going on proved to be a good decision, because as soon as I had arrived at the top of Carn Bhac, the low clouds cleared away and the rain stopped.
I was not sure where the actual summit was - there were several cairns, and the GPS did not help much - so I walked around the summit a bit. Including my lunch, I spent more than half an hour on the summit. By the time I left, my spirits were high again. It's amazing what a change in weather can do... 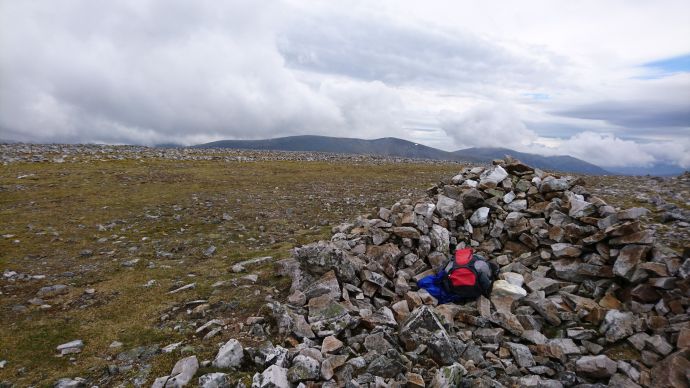 Walking across the boggy ground towards Beinn Iutharn Mhor was not too difficult, neither was the climb up the north slope to the left of Lochan Uaine. 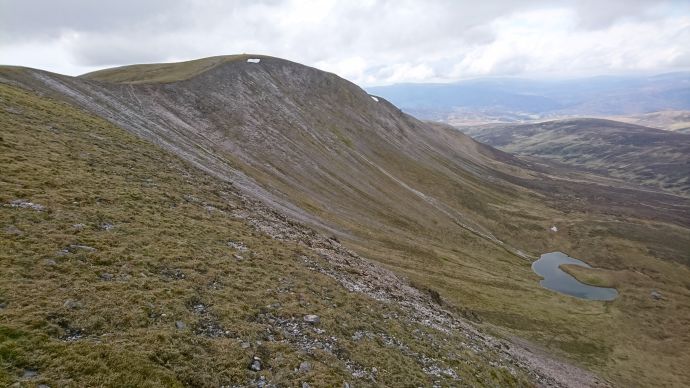 Not even 2h after leaving Carn Bhac, I stood on top of Beinn Iutharn Mhor. The sun was shining through gaps in the clouds, but the wind had grown stronger and stronger. I could already see the announced afternoon rain approaching and after a short snack hurried to get on along the beautiful ridge back towards Altanour. 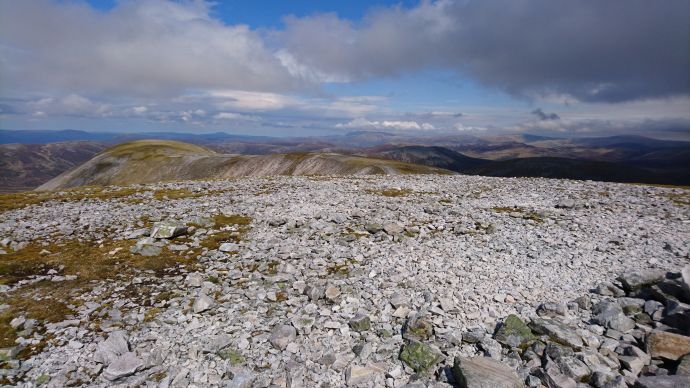 Looking along the ridge from the summit

Beyond the Eastern summit, the ground was strewn with small rocks, and walking a bit more difficult. 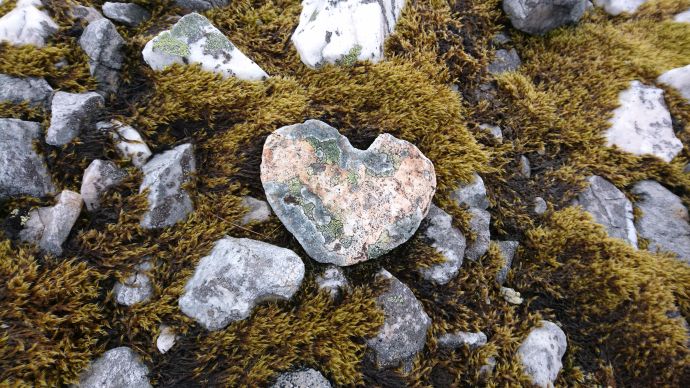 With the glen finally in sight, the clouds thickened, and I felt that it would start raining soon. 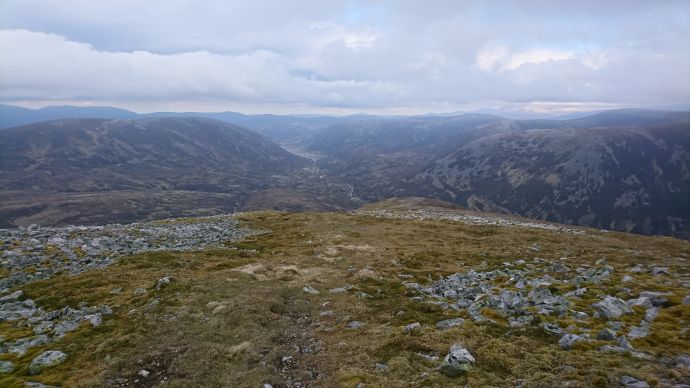 Two thirds down the hill, it eventually did start to rain, and would not stop again before I got back to the car.

On the way down, quite a few red grouse flew up with their characteristic call, disturbed by my approach. I felt quite bad disturbing them, but luckily I never came very close to a nest.

After I had reached the narrow and wet path leading to the track at Altanour, there was one magical moment when the sun managed to break through the clouds one last time, its beams bathing the little copse at Altanour in a faint light, and a rainbow rising out of the ruins to greet the clouds. 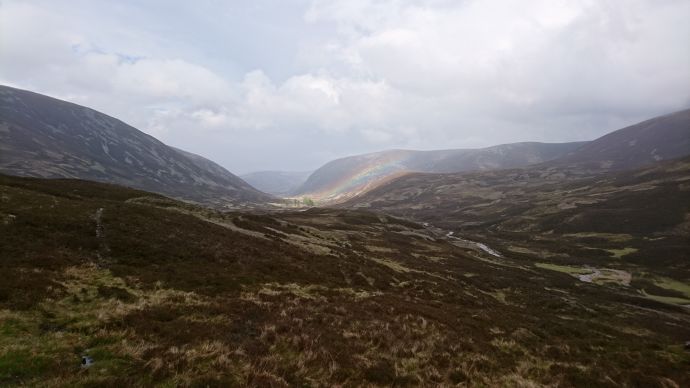 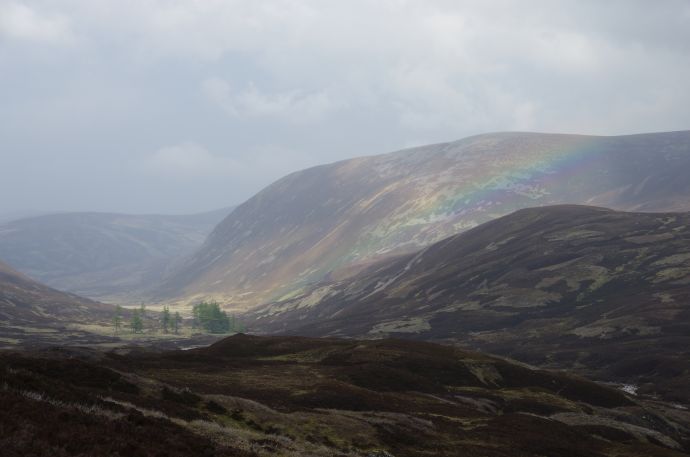 The moment that makes the day perfect

The moment only lasted for a few minutes, then the clouds had won, and all that there was left was rain and greyness all the way back to Inverey.
Unlike me, the animals were not much bothered by the rain and twilight - some red deer was grazing beyond the Ey on the other side of the glen, and a toad enjoyed the wetness sitting on the track.

I was quite soaking wet when I arrived at the car, but very happy.
With 33.7 km, it was not the short walk I had intended for my first Munro walk this year, but it had all the ingredients that make a day in the hills as wonderful as they can be.

20170522_reduziert.gpx Open full screen  NB: Walkhighlands is not responsible for the accuracy of gpx files in users posts