aonach air chrith.gpx Open full screen  NB: Walkhighlands is not responsible for the accuracy of gpx files in users posts
Another of Ralph Storer's 100 best routes , and an excellent circuit.
The forecast was fantastic and i arrived about 11.30 in brilliant sunshine.
I thought that the walk across the moor to the base of the north east ridge might be a boggy trudge , but it was reasonably dry and my gaiters were hardly needed. looking across to base of NE ridge : in the shade

There was no obvious path on the ridge . It was an easy ascent through the rocky outcrops [some good for scrambling] up to the col. 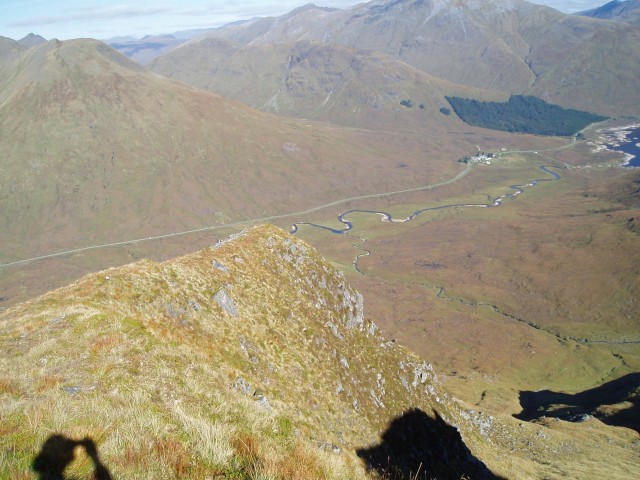 looking down from half way up the ridge. Cluanie Inn visible looking up from the col

From the end of the col , one can simply ascend the grassy slope in the centre of above photo or scramble up one of the rocky buttresses to the left [ also visible in photo].
I chose the first of these. The ridge from here onwards was quite sharp and very enjoyable easy scrambling. Though had to watch out for some rocks in the shade that were still frosted and slippy. By the time i reached the top the wind had dropped and as this was a MIDGE-FREE day , had a very pleasant nap in the sun.
Surprisingly i didnt meet anyone on the main south Shiel ridge walking along to Maol Chinn-Dearg.
After this i turned north and descended Drum Coire nan Eirecheanach which in contrast to the ascent of AIC is a grassy ridge and with a path all the way down. Overall a fantastic day in the hills only spoiled by a crash blocking the A82 which prevented me getting to my B+B in Inverinate and more importantly to the Kintail Lodge for a pint. As nobody had any idea how long road was to be shut , i headed back up Glen Shiel to the Cluanie Inn where they put me up in the Clubhouse without charging me a single supplement. Even better , the guest beer was Deuchars IPA.