When I first climbed Lochnagar, in spring 2010, I was mesmerized. The day was sunny, views were fantastic and snow-topped cliffs looked so majestic. I yearned to return here one day and explore the area even more, but I never suspected I'd stagger to the summit in 50mph gusts, wondering what the hell am I doing here

The route we picked for our re-visit to the royal mountain might look strange, but we plotted it in such way to include a plane crash site on the slopes of Cuidhe Crom. Because we have already climbed all Munros in this area (and Corbetts... and Grahams, too!) there was no pressure to run to any summits, just a good old wander to admire the mighty cliffs once more and to discover the dark secret of the lost Firefly.

Track_LOCHNAGAR 17-06-17.gpx Open full screen  NB: Walkhighlands is not responsible for the accuracy of gpx files in users posts
It was a sunny if windy Saturday morning, a long drive from Beauly to Deeside, but we're getting used to our target hills being further and further away... When we arrived at Spittal of Glen Muick car park, it was a real madness! At 9:30 the car park was already full, so we were suggested to park in the coach section. We just about managed to find a space! And more cars were streaming in, I imagine they all had to park in passing places along the road!
We paid for the parking ticket (£4 - that's pricey!) and headed along the usual well trodden route up the mighty mountain.
Weather was very promising as we crossed River Muick...

...but when we emerged from the woods onto the hill path, we noticed that the cloud was already pushing in from the west: I wasn't really that worried about not getting summit views, as we have had a fantastic photo session on this hill before. It would be a nice bonus to see them again, but not a disaster if we didn't.
The path is very eroded in places, no surprise with Lochnagar being probably the most popular hill in eastern Scotland!

Kevin was slower than usual. I joked he should carry a big sign "I allow overtaking"

but he was complaining about an old knee injury, so I didn't want to bully him. I know very well what a bad knee means - I have two of them things always ready to start hurting in the least expected moment!
Kevin hasn't had any issues with his bad knee for a few years, but if it was going to come back, maybe better that it did on a mountain with good paths. I decided to give him some time, walk slowly and enjoy the day as much as weather allowed.
We crossed the slight dip between Lochnagar and Conachcraig and started the trudge up to the corrie. It was getting windier and I was a bit concerned about strong gusts on the summit plateau.
Conachcraig from the path to Lochnagar:

We reached the col between Cuidhe Crom and Meikle Pap together with a long cue of other people (and dogs), but whereas all the crowds charged straight up the steep slope to the left, we wandered to the edge of the corrie, sat down and admired this fantastic view once more.

Later, we clambered up to the top of the corrie, being of course overtaken by loads of eager walkers, running to the summit as if there was a pot of gold there. We preferred to linger, gazing down to the little loch below and across the corrie to the vertical drops of Lochnagar itself. 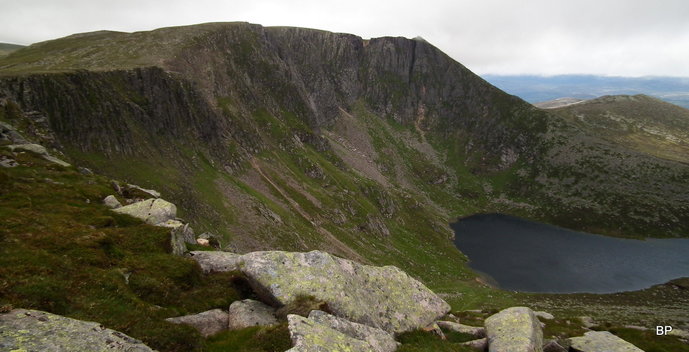 It must be said that the path up Cuidhe Crom is very badly eroded all the way up: 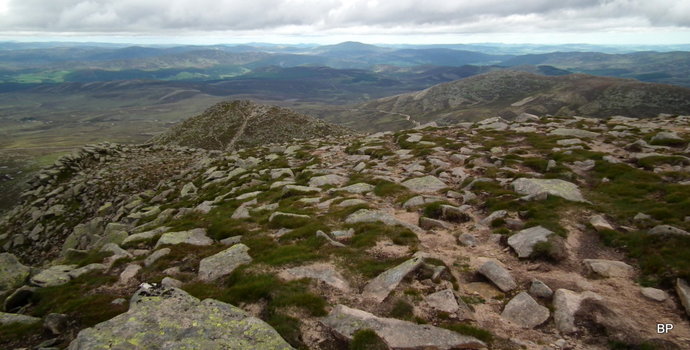 The clag was lowering down and at the slow pace we were, no chance to reach the summit before the views disappeared in cloud... One last look at the mighty cliffs: 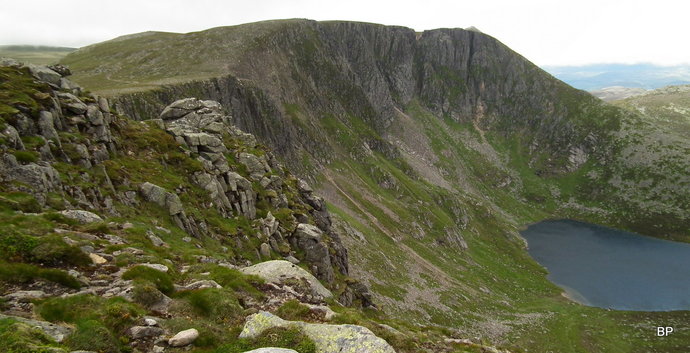 The final 100m of ascent is on an easy path, but we struggled in strong wind, now reaching 40-50mph in gusts. We staggered to the first cairn where some people were hiding from the wind, but we knew the true summit was a bit further along the ridge. The clag was just touching the ground but we didn't want to risk getting too close to the edge of the cliffs, as we might be blown into the corrie! 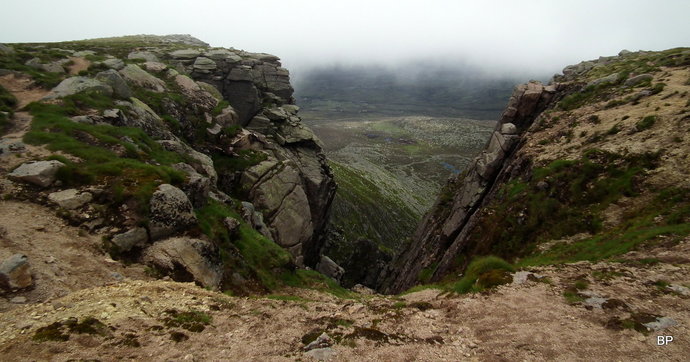 We fought the wind for the final meters up to the rocky outcrop with the trig point...

...to discover it was already occupied by a few walking parties, celebrating and snapping selfies by the round indicator. I stole our own 30 seconds with the trig point for a summit pose... 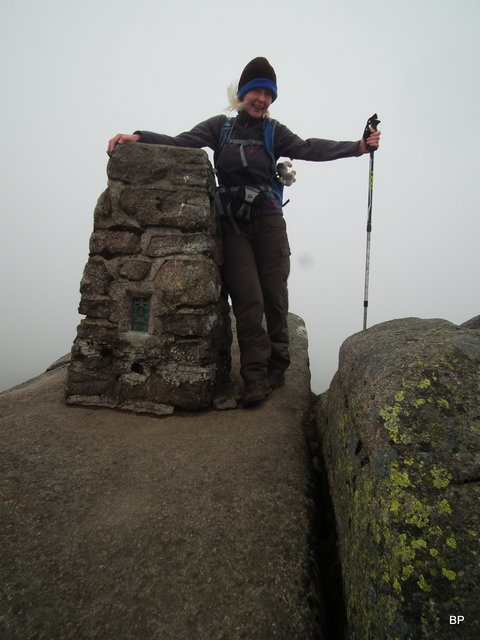 ...and as quickly as we arrived, we retraced our steps back to Cac Carn Mor cairn, where we took a short snack and cuppa break. The wind wasn't joking and the clag still lingered, so there was no point staying here for too long... All the other parties went down the Glass Allt path, but we returned along the edge of the corrie, heading for Cuidhe Crom. Looking back, we saw the cloud lift... As per usual. 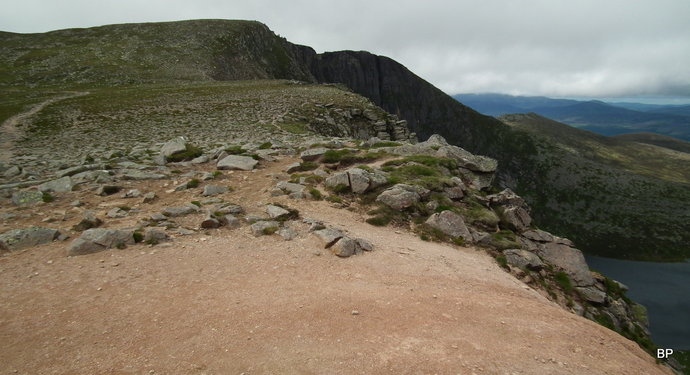 The top of Cuidhe Crom is topped with a few large boulders: 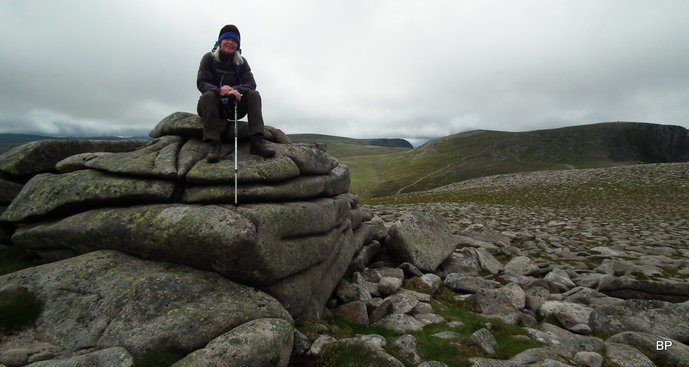 ...and is a surprisingly good viewpoint:

Now it was decision time. Kevin's knee was aching, but we both really wanted to see the crash site... I told him to take it slowly, we had plenty of time. The descent towards Little Pap looked very bouldery from above: 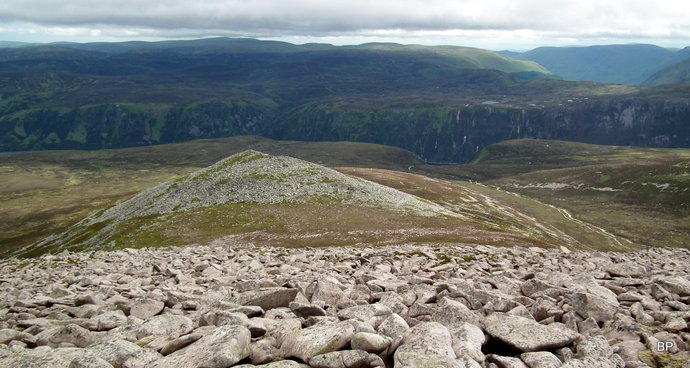 As we made our way down, some boulders wobbled under our feet - this is indeed very unstable field and I wouldn't recommend it as a fancy detour unless you want to climb Little Pap and/or visit the crash site.
The boulders go on and on forever... Can you spot the panther? 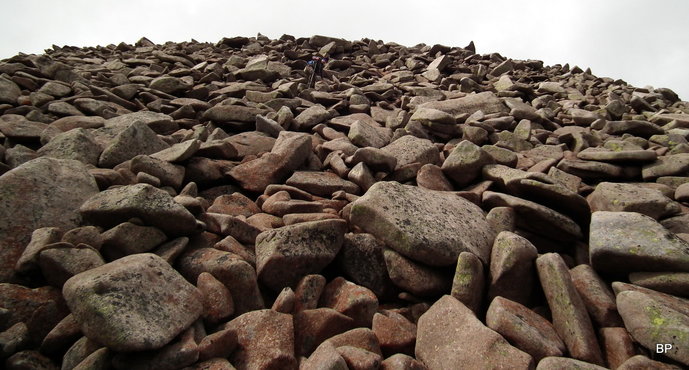 Lower down, the boulders give way to vegetation and walking was easier. Soon Kevin stopped and pointed at the slope below - here it was.The lost Firefly: 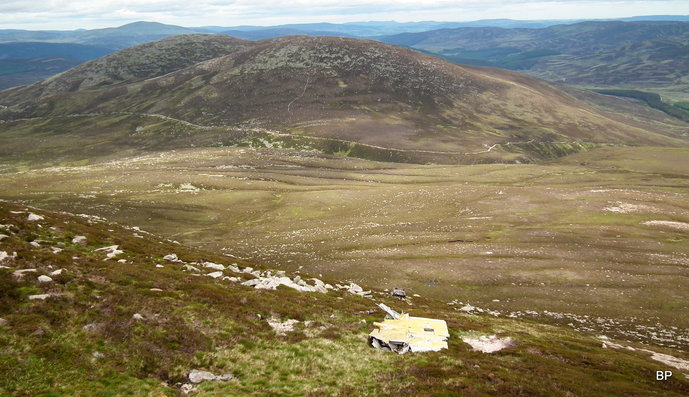 The impact crater is at NO265849, but the most prominent remains are parts of wings, painted in yellow as it was a training plane: 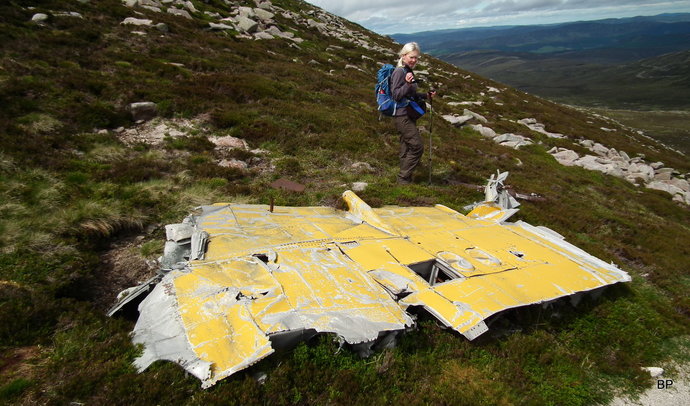 A large part of undercarriage: 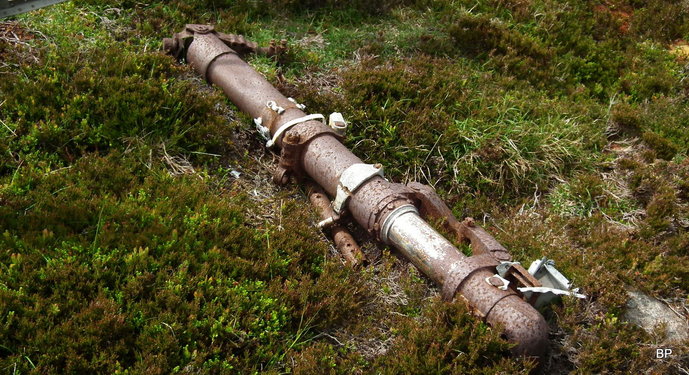 On a boulder just above the site, we found a memorial plaque: 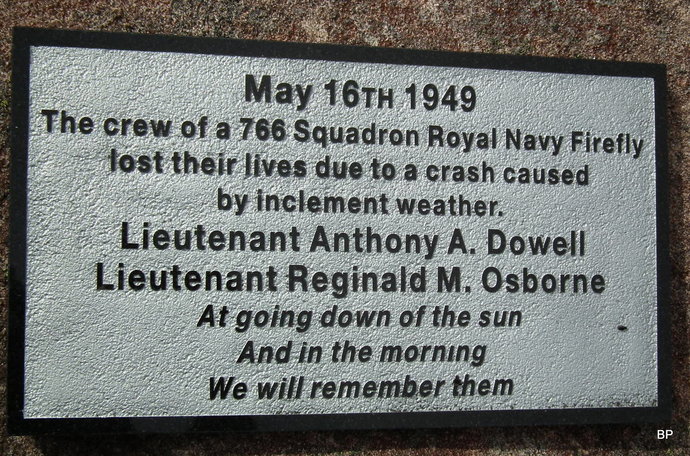 It was the impact crater, I found the most disturbing. Almost seven decades after the tragedy, and the vegetation still hasn't taken over. The scar has not healed. So sad 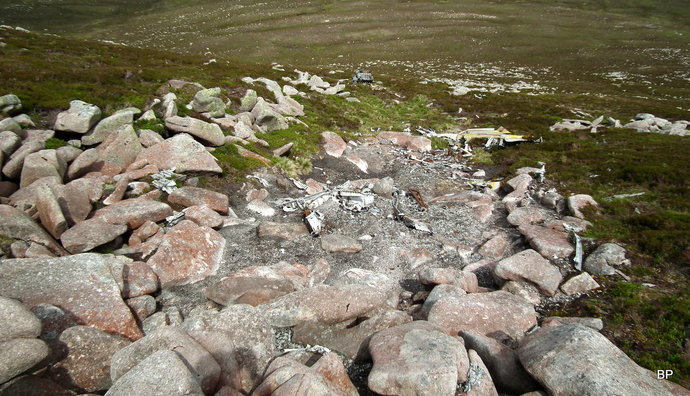 A large chunk of the plane body (possibly a wing) lies next to the impact zone: 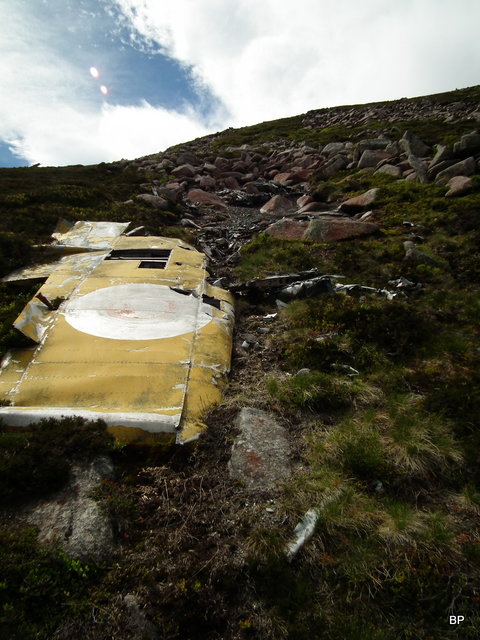 Burnt out battery. This was one of the most shocking moments. I realized, that the planer must have exploded and burnt when it hit the ground. We did this walk two days after the Grenfell Tower tragedy and I simply couldn't escape the comparisons... 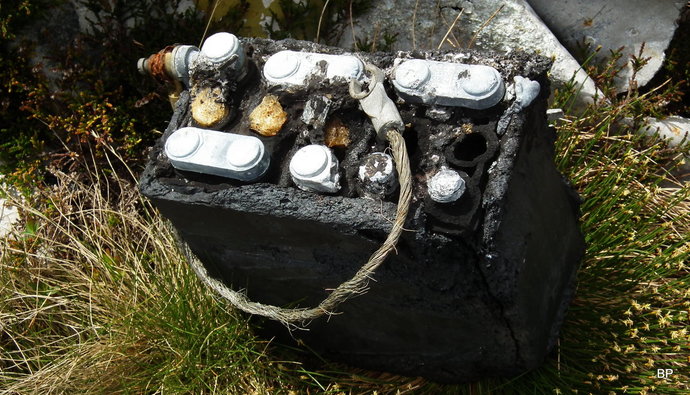 Another view of the wing, wit Little Pap in the background: 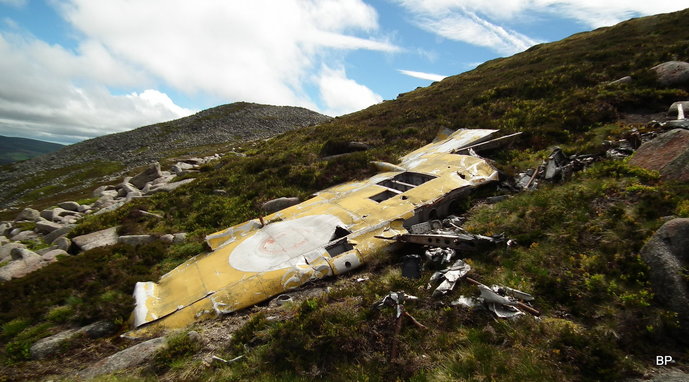 A few meters below the impact zone, we found the engine: 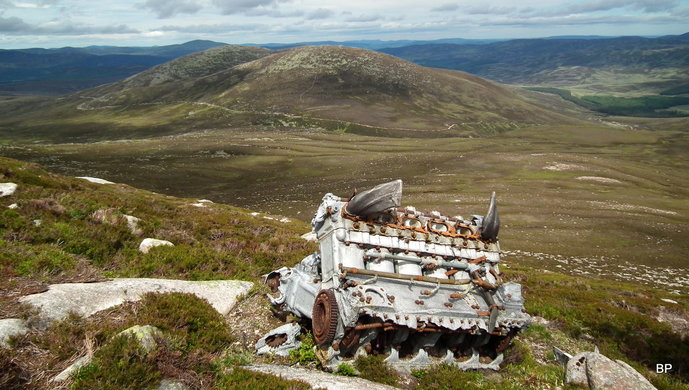 It was still very windy, but weather seemed to be improving, blue sky showed up and the sun came out... But at that very moment, I was deep in dark thoughts... 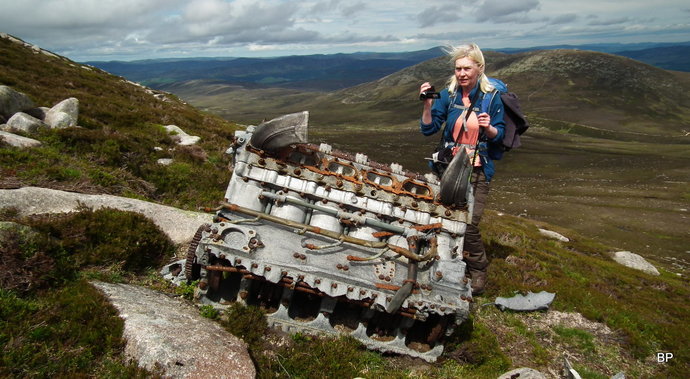 More wreckage is scattered below the engine - I bet we didn't find it all, but here are some photos of different parts of the fuselage: 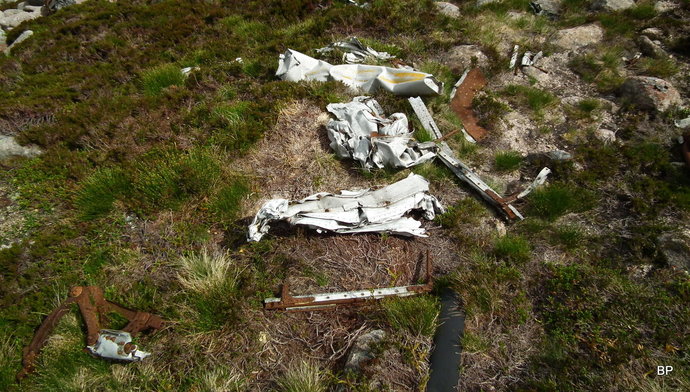 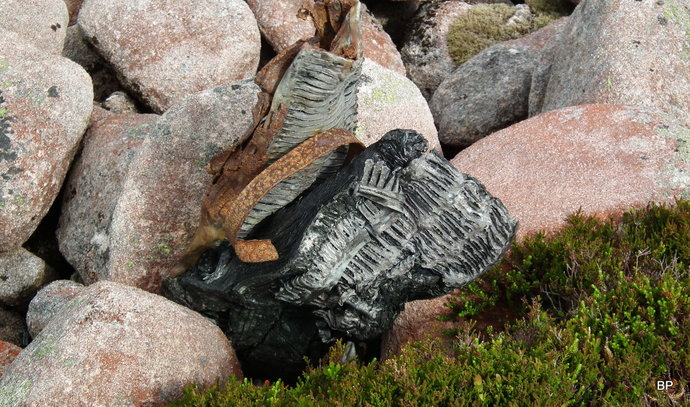 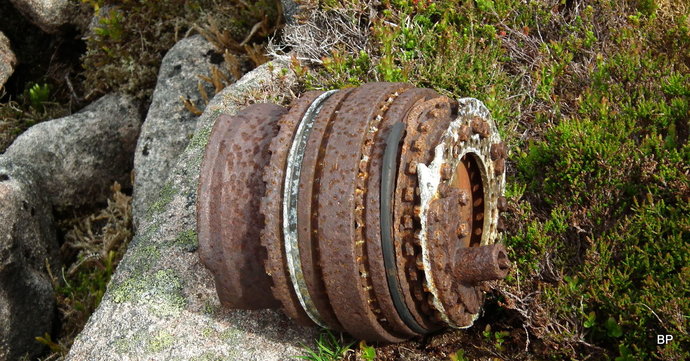 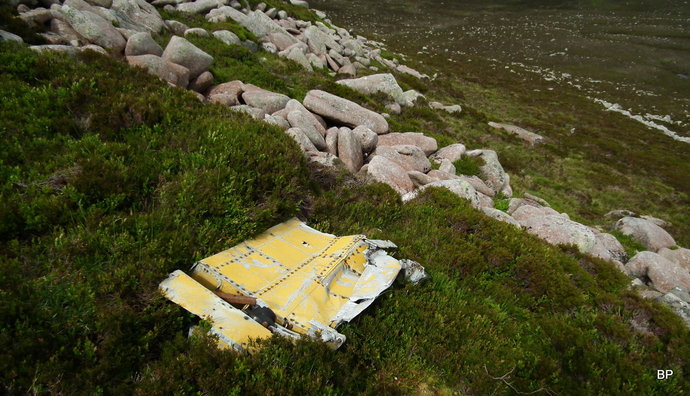 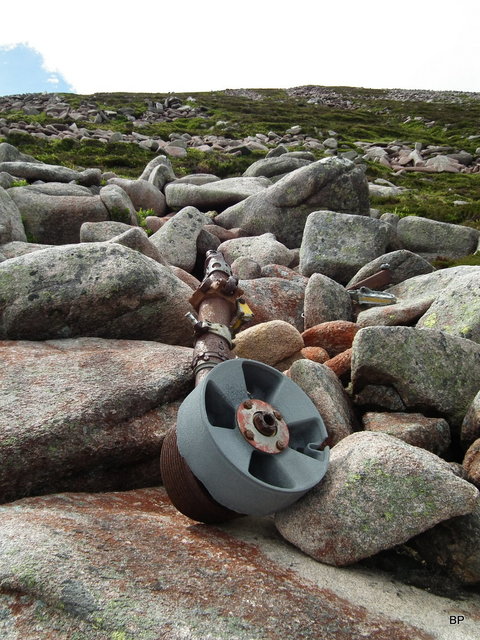 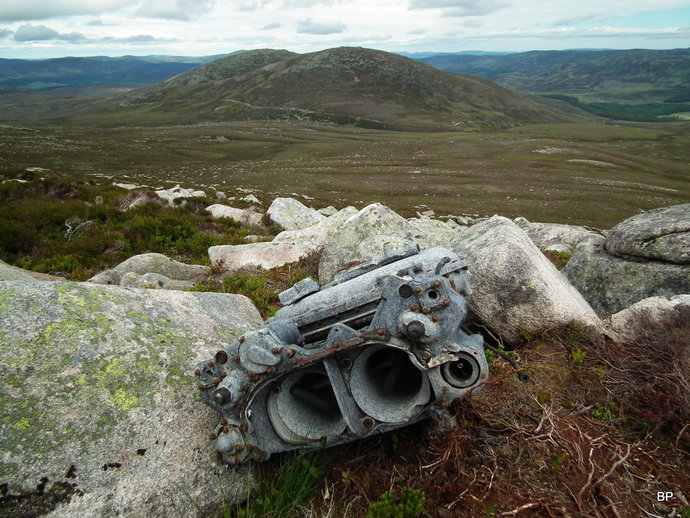 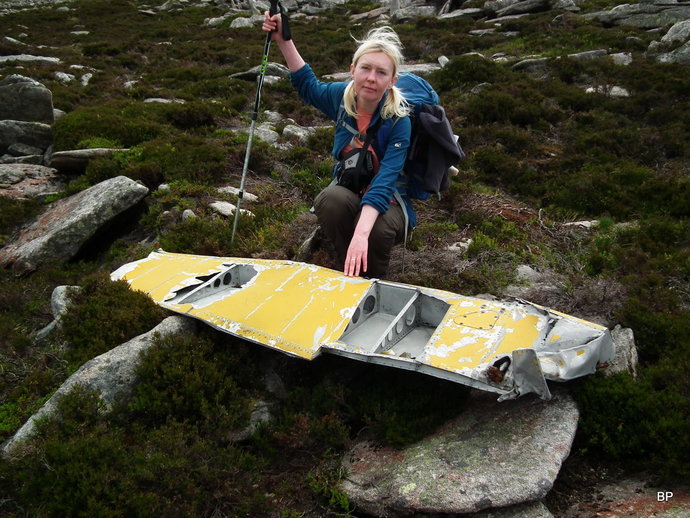 We paid our respect to the lost Firefly of Lochnagar before leaving the crash site, to return to the main route. Going was a bit stony but soon we picked a faint path, taking us back to the track on the shoulder of Conachcraig. Weather was much nicer now, shame that the sunny spell arrived a bit too late!
As we walked back to the car park, we noticed countless cars, parked all along the main road - it was a very busy day in Glen Muick! 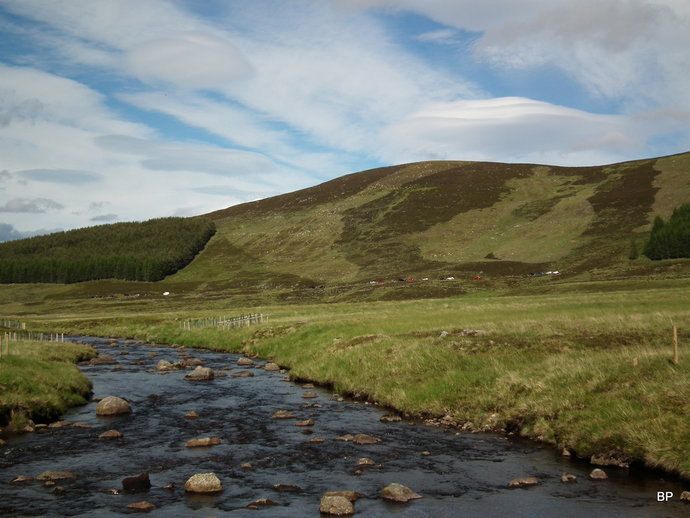 Perhaps not the most original way to climb Lochnagar. Had conditions been better, we would have spent more time on the summit plateau, exploring the edge of the cliffs, but mother nature is not always as cooperative as we wish... Descending the Cuidhe Crom boulders was a small adventure in itself, especially for Kevin. And the crash site was an interesting experience, maybe not as spooky and claustrophobic as the Shieldag one, but still very disturbing (the impact crater in particular). Very few visitors to Lochnagar know about the lost Firefly. The other crash site on Carn an t-Sagairt Mor is much more popular, as it's very close to the summit. Each of these spots has its own, sad story to tell and visiting them really puts life into a different perspective.
......
In my next story, we will perform the rite of (Gaick) passage

Very much enjoyed seeing Dark Lochnagar once again and this time through BP's lens!

Fingers crossed I don't get 40-50mph winds as I'm aiming for a high camp.

Lochnagar- the only one in the circuit of 5 that I saw nothing from!! Now you've given me another reason to go back. Not that I needed one.

I was in Coniston the other week where they have an aircraft engine lying beside the wee museum. It was recovered from an Raf aircraft crash on the hills round there. ( 40s or 50s iirc).
Just thought I'd mention that as well as its in the same tone as the thread

An interesting and thought provoking report, your description of the plane crash site added a different dimension to this iconic mountain with great photo's as ever.

Really interesting panther, thanks !
Seems the plane was from Lossiemouth where I grew up
Lochnagar Firefly
PS they all look so young, very sad.