Slioch and the Great Sundew

Slioch and the Great Sundew


We were excited to be back up in Wester Ross, the last time was 2010 when we did the lovely walk from Tollie to Slattadale along the side of Loch Maree. This time my parents came to join, so with a babysitter on hand (thanks again mum

) we hoped there might be a good day to do Slioch. As luck would have it, there was.

In the last couple of years we've only managed a few hills close to home, so having the opportunity to do Slioch was definitely a special occasion. Partly as it was one on my to do list from Pouchers Peaks, partly due to its relatively 'exotic' location (I'm sure it takes longer and is significantly more stressful to pack a Vauxhall corsa with an unimpressed 1 year old and drive from the central belt to Gairloch, than it is to fly to Europe) but also because it just looks so grand. Even better that auld croney, aka Dad, was able to join us.

Our route is below.


our_route.gpx Open full screen  NB: Walkhighlands is not responsible for the accuracy of gpx files in users posts
We arrived at the car park after some Formula 1 antics by auld croney

Once the motion sickness had settled we were soon off along the track. It started across a field/moor with an old graveyeard and good views of Ben Eighe on the left and then wound its way through newly sprung ferns, giving off that nice fern smell in the sun. 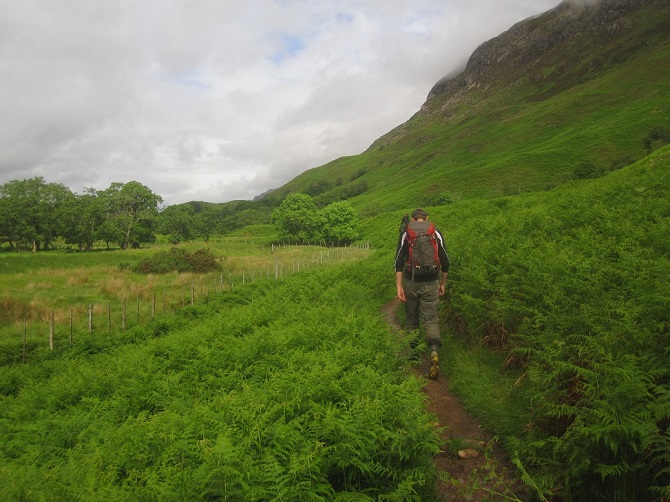 Before long we were alongside the nice Kinlochewe river which flows into Loch Maree. It reminded me of those you see in Deeside as it was quite shallow and wide. On either side of the river was a peaceful little Alder wood, these trees like growing next to water, not the type of wood you see everyday but would imagine there were probably quite a lot like this before the highland forrests were cleared. We also passed some impressive old oak trees further on and the place seemed to be buzzing with birds and insects - though thankfully not midges somehow?! Much to the annoyance of the group, I am still trying to learn my hill wildflowers. It does involve stopping every five minutes

but is turning out to be good fun as normally I see at least one or two new ones.

These orchids were everywhere, I think I have the names right! On one part of the path we saw a clump of at least thirty sundews. These little carnivourous plants are amazing up close, I think this one has a midgey (maybe that's where they got to). Apparently in the past it was used as a traditional medicine for lung problems, warts and old age among other things. Should have sneaked a little drop into auld croneys hipflask! Dad off in the distance, not suffering the flower chat gladly :)

As we continued the path met up with Loch Maree and travelled along side it for a while, right on the waters edge at one point and here we saw a pair of common sandpipers bobbing up and down on the rocks. The water was a really clear brown and very shallow at the edges. You could see the flat bed rocks stretching out into the Loch, a great swimming spot I'm sure! Up to here the walk was very easy, it would make a nice family trek for a loch side picnic. About to start climbing up

Just after this photo we came across another bridge over a waterfall. Be aware one of the planks is rotten, slightly alarming!
From here the path split off to the right climbing up beside the river, initially with a bit of a hairy drop and sketchy path - which we later found we could have avoided by just going up the slope a little. We then continued upwards alongside the river which was really picturesque with its series of waterfalls and pools, and its collection of last remaining Scots Pines. 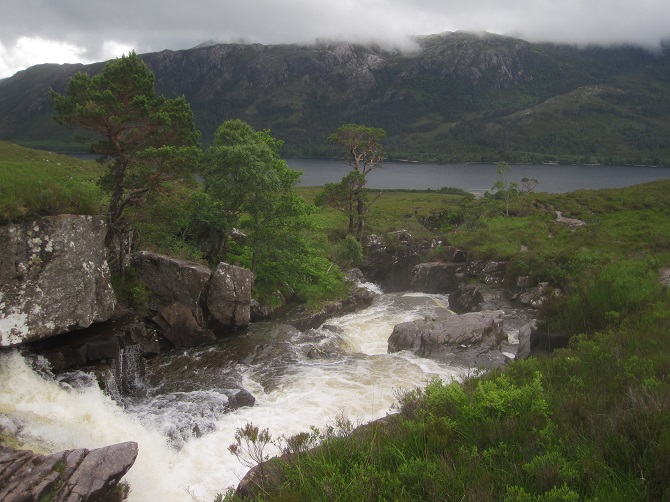 After leaving the river and gaining more height, the views over Loch Maree made a good excuse to stop for a few breathers! The path was a steady climb but still nice and easy. When we reached the col we were met with views into the 'grassy bowl' as described on walk highlands, which sums it up well. The weather started turning at this point and we found ourselves in a very wet rain cloud requiring full waterproofing. We hoped that wasn't the visibility gone for the day but plodded on regardless towards the cliffs behind. The diagonal path which took us up to the next col is obscured by cloud here but is off to the right, a faint path was followed directly to the bottom of it. The diagonal path up was no problem and once at the top the cloud was clearing and the rain stopped.
Here an obvious path lead up the next steep slope with a nice view over the two small lochans below. For me this was the only part of the walk which I struggled on due to the exposure below and the fact that the path was steep and gravelly in places. I managed but with encouragement, and Alistair standing below me as a human shield on a few occasions to block out the 'view' High on the hill with steep difficulties behind us

Once up on top it was a nice easy walk for a while, there were a few banks of sand dotted around which gave it the odd appearance of a golf course on a mountain top. To reach the summit plateau there was a final bit of ascent up through some steep rocks, a bit of exposure in places but nothing terrible. It was great to be up on the summit plateau and the clouds were blowing in and out, but slowly clearing to give some great views. The plateau curves round into a narrow ridge which was good fun to walk along. The ridge path looked intimidating at first but was a good one and once on it I found it easier than the path up from the lochans. Following the ridge down Alistair with the Fisherfields behind Taking a deep breath and carrying on

There were excellent views down into the grassy bowl valley from up on the ridge. The diagnonal rake path we took up to the lochans can be seen here in the right of the picture. Beautiful views down into the hanging valley The final top at the end of the ridge

From the last top on the ridge a nice path was easy to follow down. On the other side of the glen a massive wall of cliffs stands out with a huge flat plateau on top, it reminded me of Arthur Conan Doyle's - Lost World. The picture doesn't really do the scene justice. Once down this slope we re-joined the floor of the grassy bowl.
I was on the look out for flowers again and spied this lonely little creature growing on the edge of a peat bog. I looked but didn't see a single other. Later, once home I found out it is called a - Starry Saxifrage, how nice. The other name is a hairy kidney wort

which seems a little unfair to the poor wee thing, but it does amaze me all the old uses for all these plants. As you can imagine the others were not too bothered by a tiny flower in bog. This next one however was a non native, non botanical specimen and their interests were finally sparked.............time for a break! We then joined back up with the path we had come up on and it was a question of a long walk back to the car.
We came across quite a few more lone Sundews on the way down. It wasn't until a few days later that I realised this particular one looked a bit different from the rest. A handy wildflower book in the holiday cottage revealed that this is a rarer plant called a Great Sundew. You can tell as its leaves are elongated 'like lacrosse sticks' and not round. Not sure which one is better for treating old age, I guess we'd have to test them! 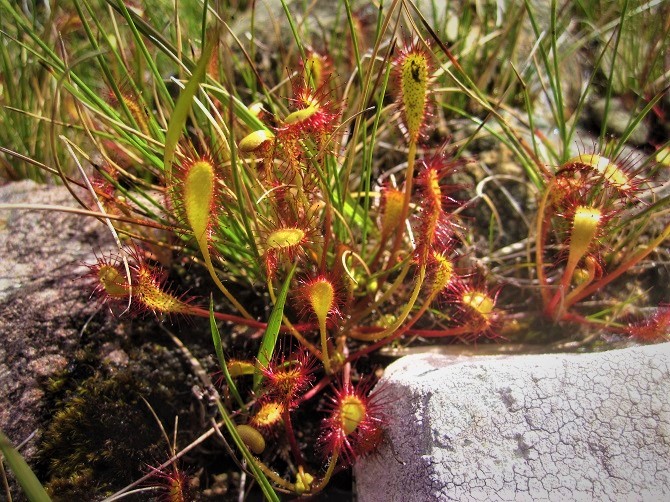 A great day out, definitely up there with one of the best.

Great report on a fabulous mountain - and I love the Starry Saxifrage!

You're not the only one with an obsession for identifying plants along a walk - and, those captions are all correct. So far as I know.

I'm especially fond of tiny little flowers like the saxifrage, though (along with butterwort), I never seem to get the flower and the leaves visible in the same photo.

I took a slightly different version of the route, but even as an occasional scrambler, I found that same slope above the lochans very eroded, loose and a bit concerning. I eventually found better going on the right-hand side, at the edge of the hill rather than the south face, but that might just have been because I'd passed the worst of it by then.

And it's nice to see that you had some blue skies to reward you for pushing on through the shower. I loved the views and enjoyed clear conditions at the top, walking these only four days before, but some more brightness would have been good.

Apart for the Round-leaved, sundews are actually a bit complicated to ID reliably. It is quite hard to tell the difference between Greater and Oblong-leaved, and any of the various hybrids between the 3 species! Comparing with photos online I might lean towards Oblong-leaved for yours: the leaves are not very upright and the sticky hairs don't extend a long way down the stem, but I'm really not sure.

An enjoyable report and I loved your pictures of the flowers especially the Sundew. I like to try and indentfy the flowers I see in the mountains and am always amazed at how many different ones there are in rocky and seemingly barren places.