Horns through the clag on Beinn Alligin

Horns through the clag on Beinn Alligin


I reached Kinlochewe on Sunday afternoon (11th), but persistent rain kept me down close to the loch, despite having already had one weather-influenced rest day before that. So I was determined to get out on the Monday despite a forecast of strong winds, cloud and further rain.

The wind, at least, was predicted to ease off to 20-30 mph later, though the low cloud and blustery showers were likely to continue. That was enough to discourage me from attempting the most challenging ridges, but I told myself that Beinn Alligin should still be an option. This would mean missing out on the views, but it ought to offer some moderate scrambling practice - and heading around clockwise would put that towards the end of the walk, once the weather had settled a bit.

That gave me a leisurely morning, after two early starts the preceding days, to prepare and then drive the narrow A896 over into Torridon. This had a moody feel, with low cloud and rain above burns and rivers in spate and lochs looking ready to engulf the glen. Then I turned off to the minor road through Torridon village and uphill to park near the bridge over Abhainn Coire Mhic Nobuil.
There were a number of other cars, with several people setting off as I dallied and tried to avoid being munched by midges. I started out at 11:05, crossing the minor road to join a wet path just west of the bridge. This is marked on my Harveys Torridon Mountain map, though OS seem not to know about it. Start of the path uphill

The path leads up over damp moorland towards some stony outcrops, finding a way up and between the terraces. Stile before the first outcrops

I noticed the yellow flowers of bog asphodel, a rare spot of brightness in the dreicht surroundings. Caught up with 2 female walkers during this stretch, then paused myself to put on my over-trousers in shelter on some more level ground at around 300 metres. 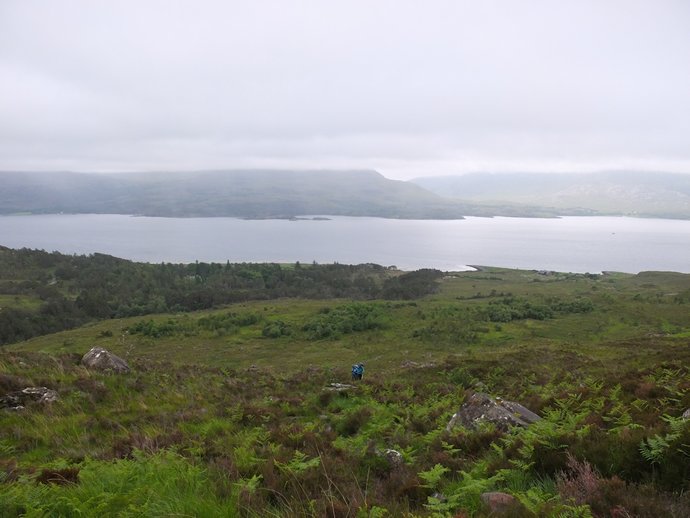 Look back at Loch Torridon

I approached and passed another couple, sounding like they were from north-east England. They were aiming to walk the Munros but not continue to scramble the horns. As things turned out, I wasn't to see anyone else on the hill until heading back out on the well-built paths through Coire Mhic Nobuil.
I followed the foot-worn path up around into corrie, noticing a lot of woollen netting put down against erosion. Though the ground was still very worn from the number of boots that must go this way, so I tried to step on rock or the already-used path rather than spreading the damage. There were showers and wet mist, sometimes a strong wind blowing down corrie. That and the cloud meant that I followed the path, though I've read of a scrambling alternative up the east ridge of Na Fasreidhnean. Maybe that's one to try if and when I walk these hills again with some views.
Maybe because of the weather, I seemed to be making slow progress, though the path was OK. Even what loose bits I can remember weren't bad (though I might simply have been comparing things to rougher going in Glencoe and Glenfinnan). I took a brief lunch stop during the ascent, taking advantage of the relative shelter and trying to pace myself.

The cloud was well below 600m, offering no views or even glimpses more than a stone's throw or so away. So when the path faded away and ground began to level onto broad slope, I needed to find my own way. But, having read up on the route, I found the summit through a combination of heading uphill and instinct. The trig point is built from stones, rather than moulded concrete, making it look more appropriate for the stone outcrop where it sits. Checked my map and bearings, then headed along NW then N ridges. These narrow and there is a brief step down, as mentioned in a Torridon guidebook that I'd borrowed from the library. Then there was much more descent, along what felt an interesting ridge, not that I could see much more than that the ground dropped steeply to my left and almost vertically into the corrie on my right. The path tended towards the left side of narrower parts, avoiding the crest. That was welcome due to the wind and driven showers, which were causes for caution though far from unbearable. At least I felt at no risk of overheating, even wearing waterproofs.

Another pause for more lunch (pitta bread, as far as I remember, which would have been with either peanut butter or a spicy vegetable pate). Then a gradual, steep ascent made quite easy thanks to the walking path. I encountered a female ptarmigan with 7-8 chicks, at once impressing and concerning me with how they copied in such conditions There were more erosion nets as broader slopes had more damaged turf and loose stone, rather than the solid rock underfoot.
I paused to look down into Eag Dubh, but the persistent wind, light rain and cloud continued to hide the dramatic scale of my surroundings. Then the path turns, first right and then left, climbing for a short stretch further to reach the fine summit cairn. Another snack stop, sheltered behind the cairn. After restocking on energy, I'd no wish to turn back (there are descent options west off Sgurr Mor, as well as returning the way I'd come). So I turned left (eastwards) to start what turned out to be quite a long descent, involving a few slightly scrambly bits. I stowed my walking poles during this stretch and they were to remain on my pack until well down the path off Sail Bhig. The first horn provided some easy scrambling, with caution due to damp stone. The route, easy to follow due to a path and signs of wear, heads up the southern side of the ridge rather than tackling it head-on. I also noted the precarious bypass path, looking suitable only for sheep or others with a far keener sense of balance than sense of self-preservation. The direction of the scrambling offered some shelter until I emerged into the wind at the top, but even on that narrow stretch of ridge it never felt uncomfortable. Or possibly I'm just developing a sheep-like disregard for scant footing and steep ground!

The walkers (scramblers) path makes the route plain even in cloud. The second horn was even simpler, as well as involving much less descent and reascent. On its own, this might not even have called for putting walking poles away. There was a slight stone step to start the next descent, but once again untroubling to stretch my lanky shanks down and find some footing.
So I decided to test things more on third and final horn, attempting to tackle that directly. I scrambled up two of three terrace / steps, with more determination than any kind of grace, but last part looked a bit much of a stretch to negotiate with damp rock and a bigger drop behind me. So I moved along to my right and found some more footing sized for clumpy for boots, getting up without further concerns.
Along the third horn, I passed another cairn, then a path started down the ridge. This resorted to a lot of zig-zagging down terraces, but that eventually brought me beneath the cloud ceiling. Peeking beneath the cloud

I saw burns flowing along both sides of the ridge, I'm guessing Allt Toll a' Mhadaidh and Allt a'Bhealaich. Then the path turned right/south, for much more and steeper descent. I found, as often happens, that going down steep ground took me almost as long as heading uphill, or at least things felt that way. The stone was thoroughly soaked and I wasn't feeling much drier myself, though at least the light-but-persistent rain eased off and there was a milder, drying breeze for most of the walk out. I saw a couple of walkers ahead on my way down towards the well-made main paths, meeting several who may have been returning from the hills, or just around below the cloud level. The path out eased to a bridge over Allt a'Bhealaich, then another crossing of Abhainn Coire Mhic Nobuil which is part of the Liathach circuit. I'd not seem much of that hill, beyond its lower slopes, but the soaring west flank of Beinn Dearg supplied some drama beneath the grey ceiling of cloud. Meeting and passing more people once again, I followed the east side of Abhainn Coire Mhic Nobuil as that flowed through a deeper gorge. Path past the pines

Then paused on the road bridge to look back upstream at a waterfall, well-supplied by all the rain. There was just one last dash past the midges and into my car, before trying to extricate myself from the outer layers of waterproofs. The bunkhouse drying room would be busy that evening.

Re: Horns through the clag on Beinn Alligin

I always enjoy a vicarious wander over possibly my favourite Scottish hill -even when it is cloudy. Feeling nostalgic too as I also did the same traverse in similar conditions in 1993 -the only time out of half a dozen I've been there in cloud though.

Re: Horns through the clag on Beinn Alligin

litljortindan wrote:I always enjoy a vicarious wander over possibly my favourite Scottish hill -even when it is cloudy. Feeling nostalgic too as I also did the same traverse in similar conditions in 1993 -the only time out of half a dozen I've been there in cloud though.

It does feel good (or, I do) to be out on a hill and find that the conditions "aren't that bad", compared to looking wistfully up at the bits hidden by cloud.

I might not be back up Beinn Alligin another five times, but there's definitely a couple of further directions or sides that I would like to try, hopefully with views. Its popularity is well-deserved.