Track_2017-07-08 191058.gpx Open full screen  NB: Walkhighlands is not responsible for the accuracy of gpx files in users posts

The wife and I had looked at our calendars a while back and saw our summer weekends off together quickly filling up. We quickly booked off this weekend and one in August for some hill walking / chilling time. The plan was to get a Hobbit Hut somewhere and go "off grid" (social media and phone free, that's as much off gridding as I can do

Two things got in the way of this cunning plan. Manda's sister, who lives in Madrid, was due to give birth to our latest niece on Wednesday past and Manda wanted to travel there as soon as possible after the birth, so we couldn't risk being away the whole weekend. Then the weather turned and only Saturday looked like a decent day. Fortunately the birth was delayed so we hot tailed it up to Laggan to do the Creag Pitridh three.

As soon as I mentioned this was a multiple Munro day I got the look from Manda which said "This better not be one of your ad-hoc, lets join up loads of munro trips." I assured her it was a recognised route and sealed the deal with the promise of a good pub dinner on the way home

Started the walk from the layby on the A86 at the west end of Loch Laggan. It was busy with cars by the time we got there but amazingly we only saw four people all day. It was sunny but when we got out the car t-shirts was not the way to go so the compression tops were donned and the long walk in began. As a few people have done we missed the left turn and started to walk past Luiblea cottage. Luckily we realised our mistake and turned back. A good landmark to keep in mind is the small quarry. If you see this directly across the river from you, you are on the wrong trail!

The trail in is easy, usual land rover track. The views round us were impressive. The MWIS forecast had been correct and nearly every summit was cloud free. Far to the right was the Grey Corries with Stob Ban sticking out like a sore thumb, then the Loch Treig munros and finally once we had negotiated a few turns and gained a bit of height our 3 came into view, and they were still miles away. Just over 3 miles of walking brought us to the stunning beach at the head of Lochan na h-Earba. It's beautiful here. We agreed that it was a perfect camping spot as the beach was quite sheltered from the westerly wind and it would be a great place to chill out. How was this even formed? I thought there had to be a tide to crash rocks against one another to grind them down to sand? The other side of the road looked like a lush green swampland, I half expected an alligator to make an appearance For all you bike 'n' hikers out there this is definitely an option here, one I wish I'd taken on the walk back out. The trail continued into Coire Pitridh on the eastern side of the Allt. It was still a good trail but a bit more overgrown, still very bikeable and we soon found a bike dumped in the heather further up. Beinn a'Chlachair from the beach

Alas this was to be the last path we saw for a long time. It's amazing how this is a relatively accessible set of Munros yet somehow there is no erosion of a path. Shortly after the picture below was taken we had to cross the Allt and the long, tiring hike through the peat (thankfully not too boggy) and heather up Beinn a'Chlachair began. This was hard going for the humans, for Mountain Mutt it was a breeze. Manda's poles kept collapsing too which meant she didn't get the full benefit of them. This is a beast of a mountain, it seemed like a never ending ascent. At least we kept getting the views to the west, but as we got higher this lack of shelter meant we soon got battered by the constant wind which meant jackets and even gloves were required, in July! The heather slopes flattened out slightly as we entered the rock fields further up. We met the owner of the mountain bike here who had done these three clockwise and gave us the great news that the walk didn't get much better. Cheers mate!!! Having not studied this route much I also cursed the fact we were climbing up the opposite side of the coire from the summit. I think I saw a line of cairns on the western ridge. Anyone been up that way? Is it better than this route? When the stack of rock on the right of the photo above came into view we decided this was the best place for a lunch stop. This had taken quite a bit of effort as at times the wind was blowing us both sideways so we were glad of some shelter. From here the walk to the summit was ok. It was boulder fields but a lot of big rocks so it was slow going watching where we put our feet. The views at the top were brilliant. Clear skies, mountains everywhere, just can't beat it and it makes the slog all worthwhile.

Panorama to the west Geal Charn on the right

As I said before, Beinn a'Chlachair is a beast of a mountain and we didn't realise how big until we finally got off it and looked back from Geal Charn. The start of the walk to no 2 was fine. There is a huge, long shoulder which consisted of mostly boulder fields that we walked across pretty much aiming for Geal Charn. Not much height lost here so eventually we had to pick a way down the steep slope towards Coire Pitridh. Again no paths or even clues as to where this was to happen so I took a grassy slope with some natural steps in it whilst Manda took the more rocky option and Mountain Mutt wondered why we were taking so long. Sometimes I hate that dog.......he literally bounces down slopes in seconds! The good news was we could see a path at the bottom which met with another path that appeared to go up Geal Charn! Woo hoo!!!!!! Geal Charn. The path is just visible to the left of the photo.

That elation lasted all of 20 mins or so as the path curved off to the low point between GC and CP. According to the GPS we had to go straight on in a route 1 up another pathless slope. These were Manda's first Munros of the year, we were now almost 5 hours into the day and she was starting to tire. I got the look of death as I suggested we should go this way so we decided to go to the low point and hope there was a descent path..........there wasn't.

To be fair Manda dug in and the final climb to the summit of GC wasn't too bad. Again it started off as bog and heather then boulder fields but then leveled off and it was an easy walk to the summit cairn which is visible from miles away. The views were still great and we rested here for a bit before descending the same way. BAC is a very distant memory CP is the middle of the 3 humps, it is a comparative mole hill to its neighbours 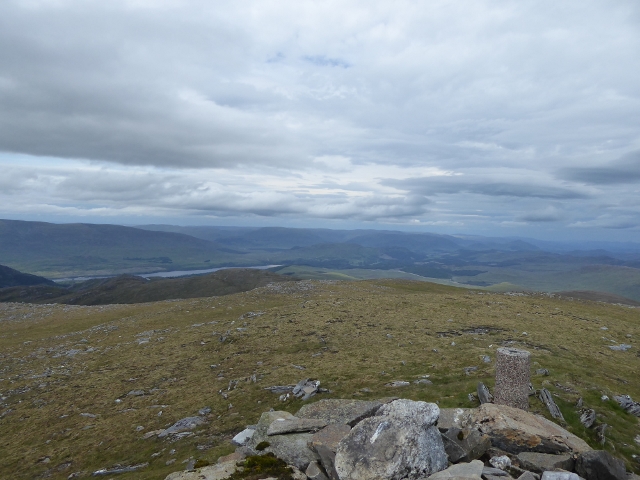 Manda decided she didn't have the energy to do CP so we parted ways at the low point between the two and agreed to meet back at the beach. She returned to the main path down through Coire Pitridh the same way we had came up and I headed straight for CP with Mountain Mutt. This Munro was a doddle compared to the other two. It is much smaller and there was a path

but it was still fun as it was steep and rocky. Took us only 15 minutes to get there. By now the wind was really starting to blow a hoolie so I took a few quick pictures (views were still awesome) and headed west off the summit down the long shoulder next to Lochan na h-Earba. Time for another route conundrum. The GPS wanted me to come off this shoulder and start heading across the bog and grass towards the main path through Coire Pitridh, I favoured staying on the shoulder. I then saw Manda on the path below and thought bugger it I'll just take a straight line through the grass and heather. I managed to dunk both boots past the top of them in the bog which was fun.

Is there another route staying on the shoulder or does that just lead to a tricky rock climb down?

Now it was just the long hike back to the car. I got to the beach and wanted to stay there. A fellow hiker came past on her bike heading back and I had an overwhelming urge to mug her for the bike but I refrained. Manda was done in, her feet were louping and my legs were tired. Mountain Mutt on the other hand was now wanting sticks thrown for him. If only we all had the energy of a border collie! The car seats has never felt so good as we both slumped into them.

I kept my promise and treated Manda to a good pub dinner in Pitlochry on the way home. They could've served us anything and we would've wolfed it down but we got lovely, hot, generous portions of pub grub to keep us going until we got home and collapsed into bed. Woke up in the morning to find out Manda's sister had given birth to baby Eilidh in the early hours.

These three Munros are tough, worth it for the views but maybe not the best choice for the wife's first 3 of the year!!!!!!!

Having not studied this route much I also cursed the fact we were climbing up the opposite side of the coire from the summit. I think I saw a line of cairns on the western ridge. Anyone been up that way? Is it better than this route?

Yes, its very pleasant with a little bit of optional scrambling. Finishes right at the summit. Dont think those were cairns you saw.

I once spent some time planning an overnighter on these hills, hoping to camp near the Loch outflow between them, but nothing ever came of it. Liking the idea of biking in more.