Great plans for the second day - a round of 6 Munros with Carn an Tuirc, Tolmount, Tom Buidhe, Cairn of Claise, Glas Maol and Creag Leacach.
I parked the car at the small parking area 2 km North of the Glenshee Ski Centre for a high altitude start. The sky was almost overcast and there was a chilly wind.

Just as I was about to leave, a group of six other walkers arrived with two cars and prepared to start as well.
After crossing the old stone bridge, the first part of the walk was easy - follow the course of the Allt a' Gharbh-choire. However, by the time I had reached the base of Carn an Tuirc, I had already lost the path, like so many times before in the Highlands. Going straight up did not seem difficult, so I just went on, picking up traces of path here and there, trying to avoid the red grouse nests as much as possible. At one occasion, while I was walking on one of the faint paths, a red grouse took off right next to me, leaving its nest unprotected and giving me quite a fright. It's unbelievable how hard these birds are to spot until you're really close. There were more than half a dozen of eggs in the nest, and the only thing I felt good about in this moment was that I am not a predator.

The group of six elder gentlemen caught up with me slowly, one of them even beat me to the summit, having gone up an even straighter line. We all assembled at the summit shelter and had a little chat before they left for Cairn of Claise. 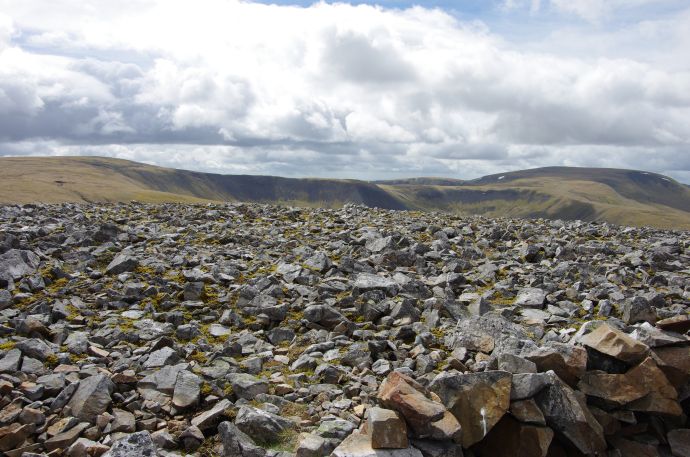 On the summit of Carn an Tuirc - the first time today...

I went down straight East to have a look down Coire Loch Kander, much recommended to me by my B&B host, and indeed the view was fantastic. From there, it was not easy to walk across the grassy plateau with the remains of many little streams running through it, leaving wet and peaty spots behind. Tolmount to the left, Tom Buidhe to the right

The animal life up here was dominated by mountain hares and the occasional Ptarmigan. Having reached the base of Tolmount, the going was much easier, and it was almost a stroll up to the summit.

And this is where everything went wrong.

When I tried to perform my "secret summit ritual", I noticed that one essential thing was missing. Something smaller than a pound coin. Panic. Would this already be the end of this year's Munro trip? Without the ritual, a Munro summit does not count for me. With ever increasing worry, I checked my backpack really carefully. Nothing. Again. Nothing. I turned over all pockets, opened all zippers, even turned the backpack upside down and shook it over a suitable spot on the ground where I might see anything falling out.

Would I have to abandon the whole project? Maybe the object had fallen out when I took my camera out of the backpack. It was leaning against the summit cairn at the time. Impossible to find an object the size of a pound among all the rocks. I dismantled half of the summit cairn and put it back together - nothing.

Maybe the item got lost on Carn an Tuirc already. I considered my options. Going on was none of them, so I reluctantly abandoned the search at Tolmount and went, no, sped back to Carn an Tuirc. I took a different route this time, avoiding the most difficult terrain.
On my way, cursing and muttering to myself what an idiot I am for not paying better attention, I went through all the possible scenarios. If I found the missing object, would there be enough time to go back to Tolmount, and then on to the other four Munros? Probably not. If I did not find it, what would I do? Go back to the car obviously, but then? I had to rely on the shops in small Braemar to get a new part. Would it be available there? But the part itself was not enough, I had to customize it. But how? At home this was easy, but on holidays?

After having gone so fast, the ascent to Carn an Tuirc was a pain, and much longer than I remembered from going the other way only two hours ago. When I arrived at the summit, I almost hoped not to find the object again, so that I would not have to decide whether to go on or not. Carn an Tuirc is strewn with rocks, impossible to look anywhere else but in the shelter, where I had opened my backpack during my first visit. Half an hour of searching gave no result, and part of me felt relieved. A plan had developed in my mind how to replace the lost object. Grumbling a little less than before, I made my way back down to the car. Arriving there, it started raining - how fitting, I thought.

I came back to Braemar early enough to browse through the shops after a good hot shower, and I was lucky. One of the shops had just what I was looking for. Now I only needed a little help from my wife from back home via the telephone, and I could reconstitute the missing object.

The day was almost lost (one Munro instead of six), but the trip was saved. and that's what counted.

The irony of it all occurred to me later that night, when I noticed - to my big surprise, as I didn't remember being so foresightful when I prepared for the trip back home - that I had a full "backup" with me all the time, I could have just got on with it from Tolmount...

20170523.gpx Open full screen  NB: Walkhighlands is not responsible for the accuracy of gpx files in users posts