Munro number 9 and it can only be described as majestic; Buchaille Etive Mor, Stob Dearg. We had set out to do it via the Curved Ridge and that's exactly the route we took, ascending parallel to the Rannoch Wall and up being Crowberry Tower, and descending down the central corrie back to Altnafeadh.
Lots of great descriptions and photos including with route marked out on them, but nothing quite prepares you. It looms over you for miles as you drive towards it; as you walk in from Altnafeadh past the white SMC hut to the fork in the path it dominates your horizon - it literally fills your eyes. And even viewing all the videos, reading all the reports, looking at all the pictutes doesn't really prepare you for the ascent up Curved Ridge. Finding it was a major challenge. By the water slab, up the scree (there's lots of scree), left then bear right to the foot of the Rannoch Wall, but where is the start of the ridge? There seems to be a few options, many paths and worryingly many crevasses and gullies. Lots of the rock has crampon markings and lots of the rock is smooth (albeit with good hand holds etc). After a nearly very serious false start, we managed to find the line (a line anyway) up and concentrated on gaining height, keeping Rannoch Wall to the right hand side at all times. We tackled it in stages, bit by bit, with the walk reports and videos and photos replaying in my head (and the printed out ones in my map pouch). And up we went. An impressive mountain on this ascent, the Rannoch Wall is enormous and forbidding. We had set out early, 6.30am, and had the place to ourselves, apart from two runners who went by us well before the water slabs, and one other walker who we saw behind us but then never saw again until the summit.
We gained the summit after crossing behind the also mightily impressive Crowberry Tower and peering down the ominous Crowberry Gully.
Stunning views - quite literally breathtaking - from the top which we attained by 10.25am. We had stopped numerous times to see Rannoch Moor behind us on the way up. With good levels of clarity and visibility, you could see for miles around even amidst the fast shifting cloud.
Walking off the summit we had thought about heading further along the ridge to Stob Na Broige; but we decided to leave that impressive walk for another day and opted to head down the "tourist route". My perception is that the name implies it's easy - i was actually glad we'd come up Curved Ridge rather than this slog up an admitedly well built rough path / steps right up to the pass at the top which then takes you to the summit if you go left and onto the other 3 moutains if you head right at the cairn. It was also really busy so again i was glad to have taken the eastern flank and enjoy almost total solitude on the eastern flank.
We made it back to the wee bench at the car park and looked back in stunned silence at this beauty of a mountain. My brother summed it up - some mountains are hills with rocks mixed in; this is a mountainous rock with some hill mixed in.
We took off in the cars, but stopped at the other car park towards the Kingshouse hotel. We pulled in to get one last look at it; and we sat there in two cars in stunned silence looking up at it - disbelieving that we'd actually gone up Curved Ridge to reach the summit of this truly magnificant munro. Looking back up the main ascent route The view down to Altnafeadh and the tourist route... 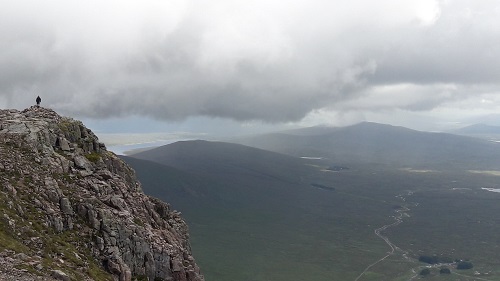 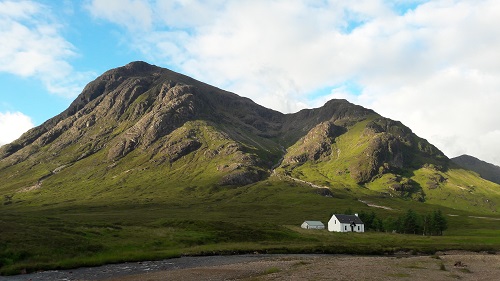 The Buachaille at first light around 6am.

Up on the ridge, Rannoch Moor below. 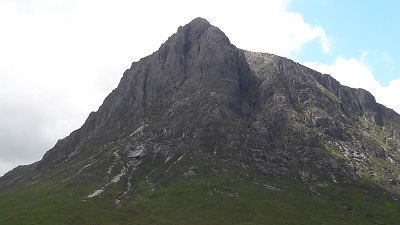 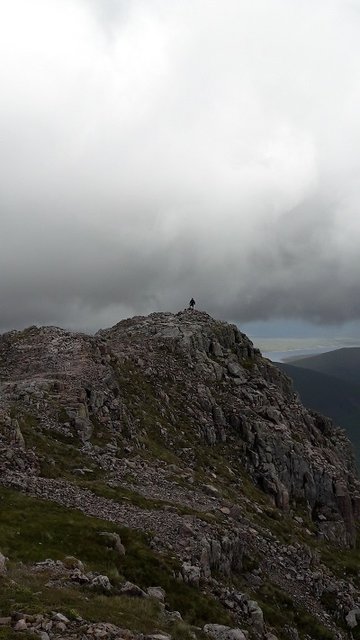